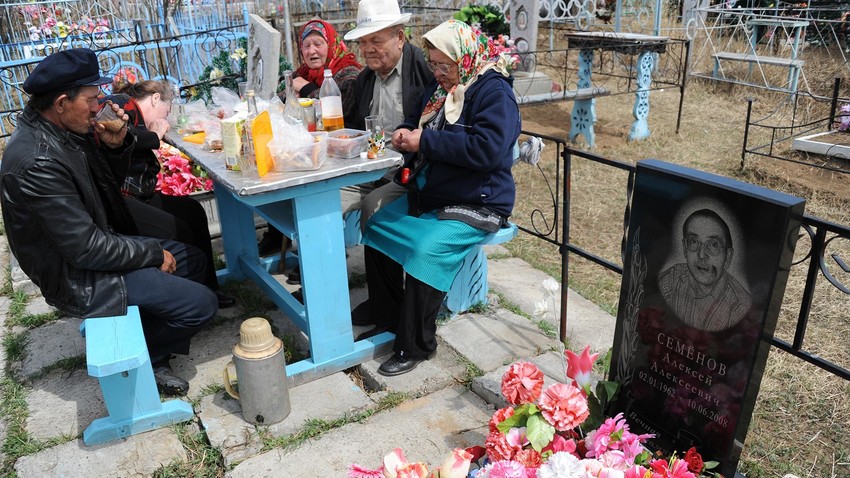 Evgeny Epantchintsev/Sputnik
At the Russian cemeteries foreigners might notice a lot of unusual things and rituals the relatives of the deceased perform. Let’s look into the most important of them.

“Most Russian gravestones have a portrait of the deceased on them. In France, it’s a very rare occasion,” Erwann Pensec, a Brittany-born editor living in Russia, told me recently. “Also, when I came to Vvedenskoye cemetery in Moscow, I was immediately struck by its chaotic layout.

“If you look at the Pere Lachaise cemetery in Paris (or at any cemetery in France) from the sky, you can see smooth parallel and perpendicular rows and Vvedenskoye looks more like a maze. Because of this, it is very difficult to navigate and you can easily get lost trying to find how to get where you want.” But these are not the only things that Russian cemeteries and graveyards are peculiar for.

Much like in the USA, where cemeteries are controlled and maintained by the United States National Cemetery System, in the Russian Federation, burial grounds are owned by the state. They are formally classified as grounds of historical and cultural purpose and are considered specially protected territories. It is allowed to use these lands strictly in accordance with their intended purpose.

This said, there are still traditions and habits that are intrinsic to Russian cemeteries. Russian lands harbored different burial traditions through the ages, but the most persistent and influential, of course, is the Russian Orthodox tradition. Here, however, we talk not about burial itself, but about the things that distinguish Russian cemeteries from cemeteries in other cultures. 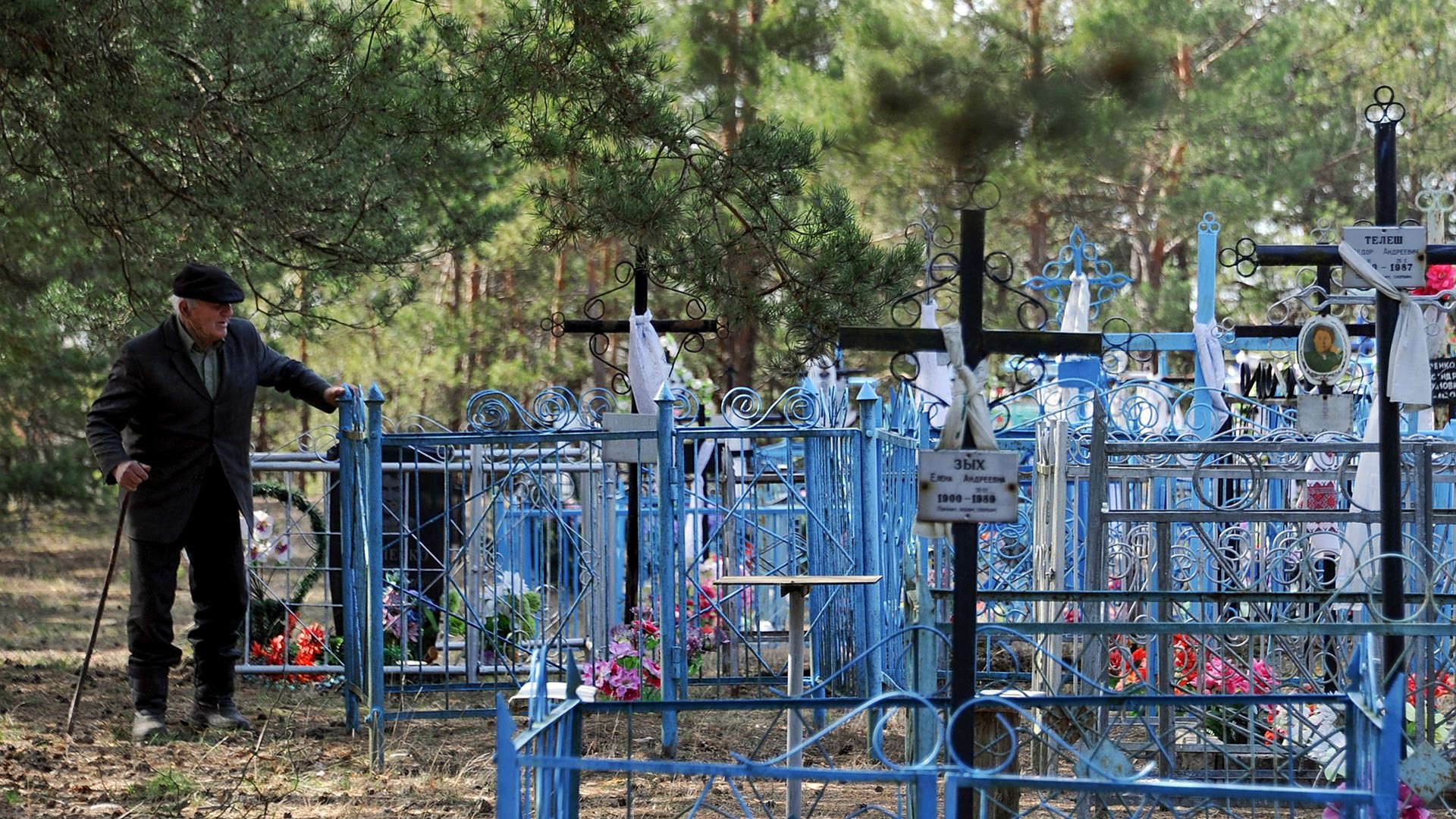 An old man walking in a Russian cemetery in summer.

The most obvious sign of a Russian graveyard are the fences that surround every plot of land with a grave, even if a tiny one.

These fences appeared on Russian cemeteries in the second half of the 20th century for a sad and simple reason – deficit of land. With population growth, cemetery land became more and more expensive. Adding to it is the fact that people prefer to be buried near their relatives’ gravesites.

So fences naturally divided different plots of cemetery land. Already in the 20th century, certain traditions developed in relation to these fences. A Russian internet user writes: “the fence is what protects this world from the other world. A kind of boundary between life and the afterlife.” It is believed that it is necessary to close the door of the fence when you are leaving the grave, "so that the deceased does not walk," or, "the spirit of the deceased does not disturb the living."

However, fences between grave sites are common now, even in places where there’s quite enough land – small, remote villages where the population is low and cemeteries are small. It seems it has become a tradition in its own right. “It’s as if people still feel the need and desire to arrange an intimate and private space for themselves after they leave this world,” Erwann says. 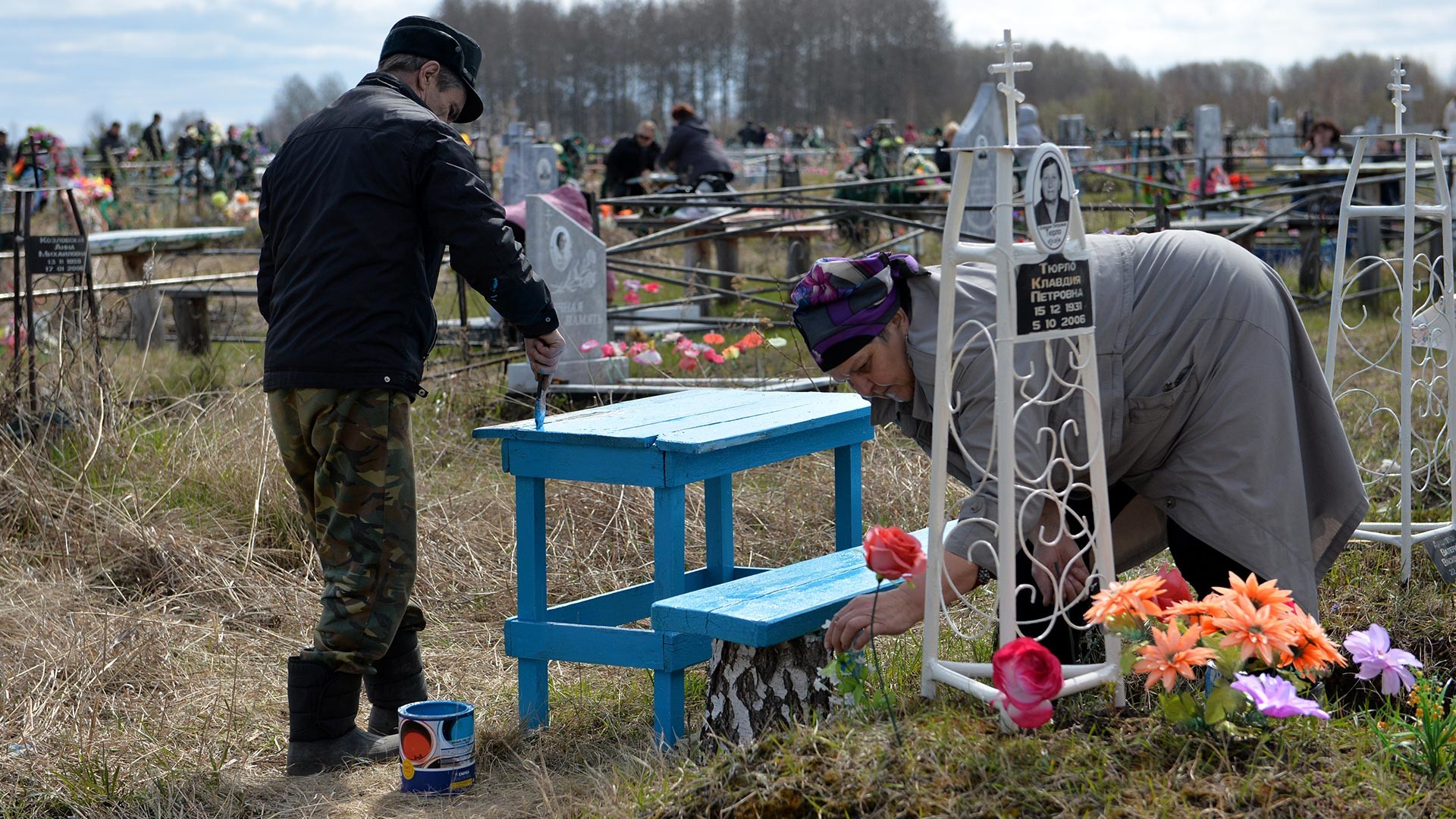 Russian people working in the cemetery in Omsk Oblast, Russia, during Radonitsa, a commemoration holiday.

Memorial benches are a usual form of commemoration of the deceased in the Western world. However, in Russian cemeteries, benches usually stand right at the gravesite, so one could “sit with the dead.”

This serves a practical purpose: the graves are often looked after by the elderly members of the families – babushkas, who just need to sit down after a long walk towards the grave. Also, planting and weeding flowers on the graves is much more convenient when seated – the grave plot is usually not very wide, so one can do it sitting on the bench.

A table is often installed on the gravesite, too – for bereavement meals. 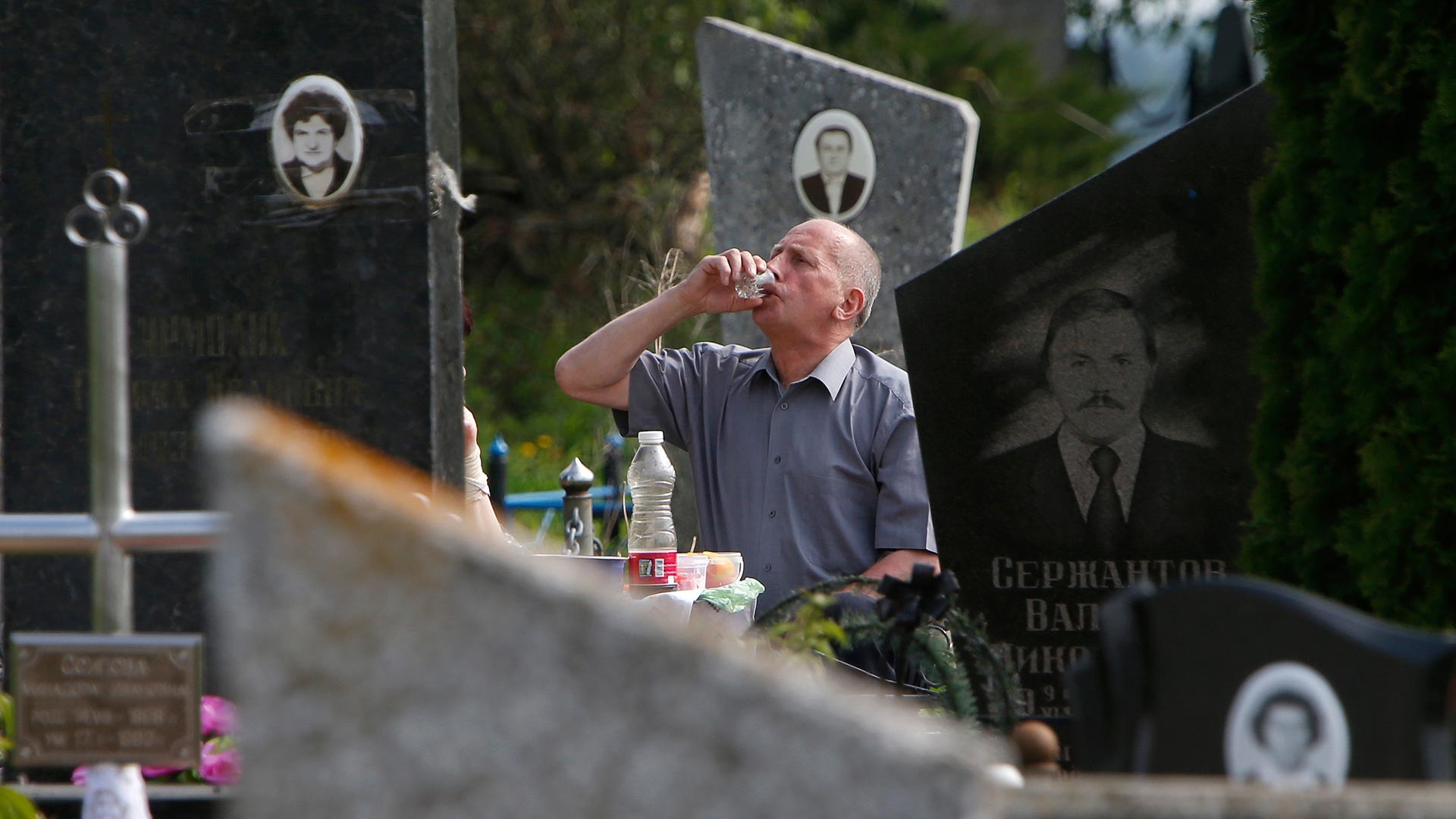 A man drinking on the grave site during Radonitsa, a commemoration holiday.

The feast at the grave is a pre-Christian, pagan rite. Eating next to the grave is a symbol of unity with the deceased, a sign that he still remains a member of the family, the clan. This is the cult of ancestors, whom the Slavs (and not only the Slavs) revered as mighty intercessors.

In Slavic tradition, the bereavement feast was called trizna. It included washing the body of the deceased, dressing it in the best clothes, and burying or cremating the remains. All this was done to the accompaniment of singing and musical instruments. When Christianity was introduced in the Russian lands, it forbade triznas – the people who tried to continue pagan traditions were banned from the church and eventually from the society.

The church considers it wrong to hold a memorial meal in the cemetery – the grave contains the mortal body of the deceased, and his soul is immortal. Therefore, it is completely pointless to seek communication or unity with a deceased family member at his grave. It is much more appropriate to remember a person who has passed away by coming to the church and praying for him. 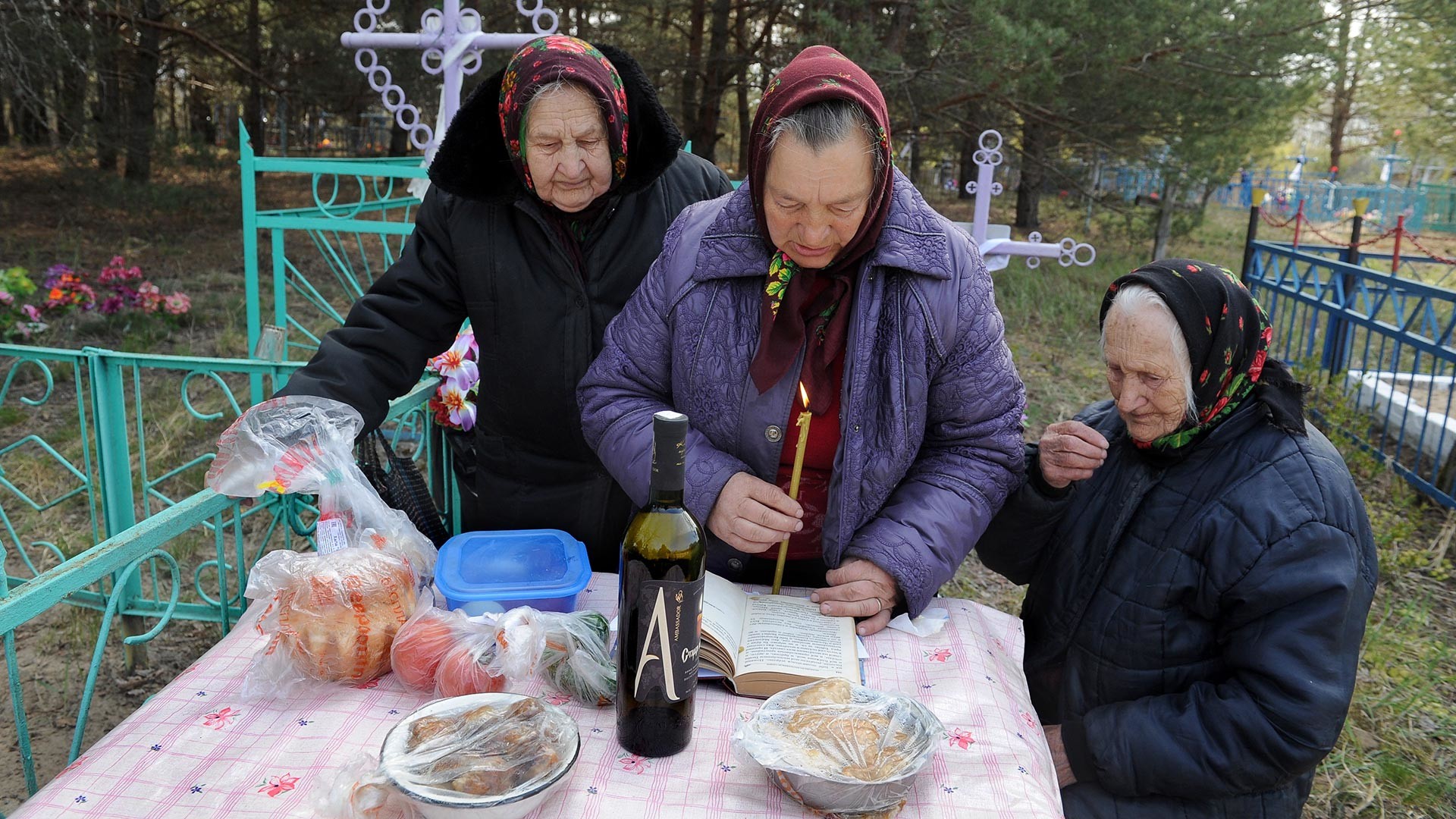 Old women commemorate their departed friend at her gravesite.

However, Russians continued triznas in some form – visiting the gravesite and performing certain rites. It’s completely usual to “drink with the dead” when a family is visiting the grave of a loved one – in this case, they can click glasses with the tombstone or the monument. Reading poetry is also considered appropriate – but singing and dancing are not allowed.

After such a bereavement meal, pieces of food and drink are left on the tombstone or on the bench – never on plain ground. What’s being left? Sweets, cookies, slices of sausage on a tiny piece of rye bread; a shot of vodka in a plastic shot glass. Cemetery workers usually don’t touch the leftovers, as taking anything from “the other world” is considered to be able to bring dire luck.

Heavy vegetation (and cemeteries in the forests) 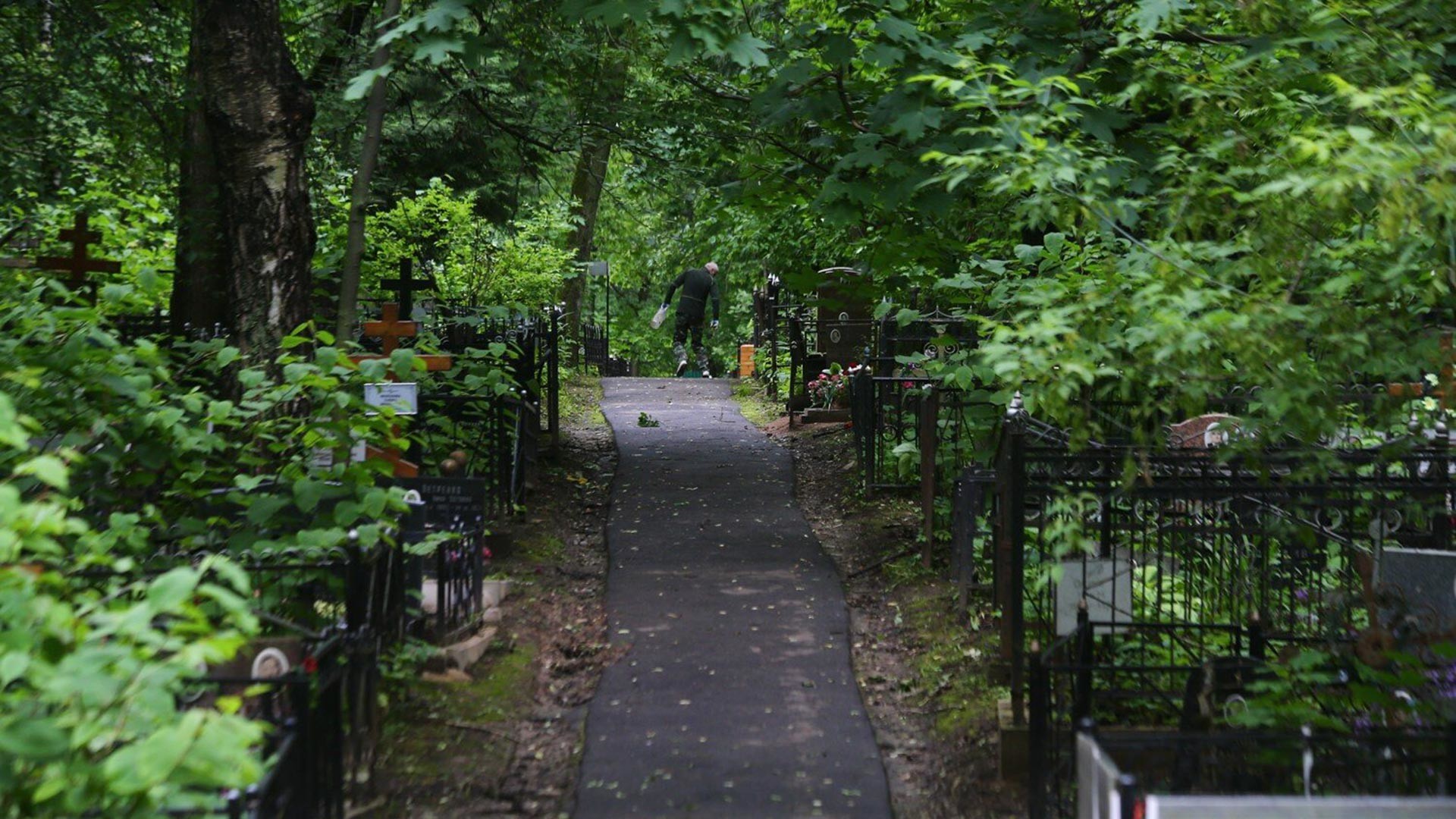 A pathway at one of Moscow cemeteries.

While riding a car through the Russian countryside, one can often see tombstones right in the forests, with graves almost tucked between the roots of the trees. When a cemetery is not located in the forests, it often has heavy vegetation growing there.

In traditional Russia, cutting trees at cemeteries was strictly, gravely forbidden. It is believed that ancient Slavs revered trees – for example, climbing trees was forbidden for Russian village children, it was considered violation of the tree’s inner spirit (and also, you can fall and break your neck). Cutting trees at cemeteries was also strictly forbidden – it is still believed that cemetery trees harbor the “souls” of the deceased.

Another possible explanation is that Russians simply don’t like seeing graves in the open, with this world being “unprotected” from the odd forces of the afterlife.

Note that the new cemeteries that appeared in the late 20th century far from city centers, in open fields, often don’t have vegetation – unless there are apartment houses nearby. 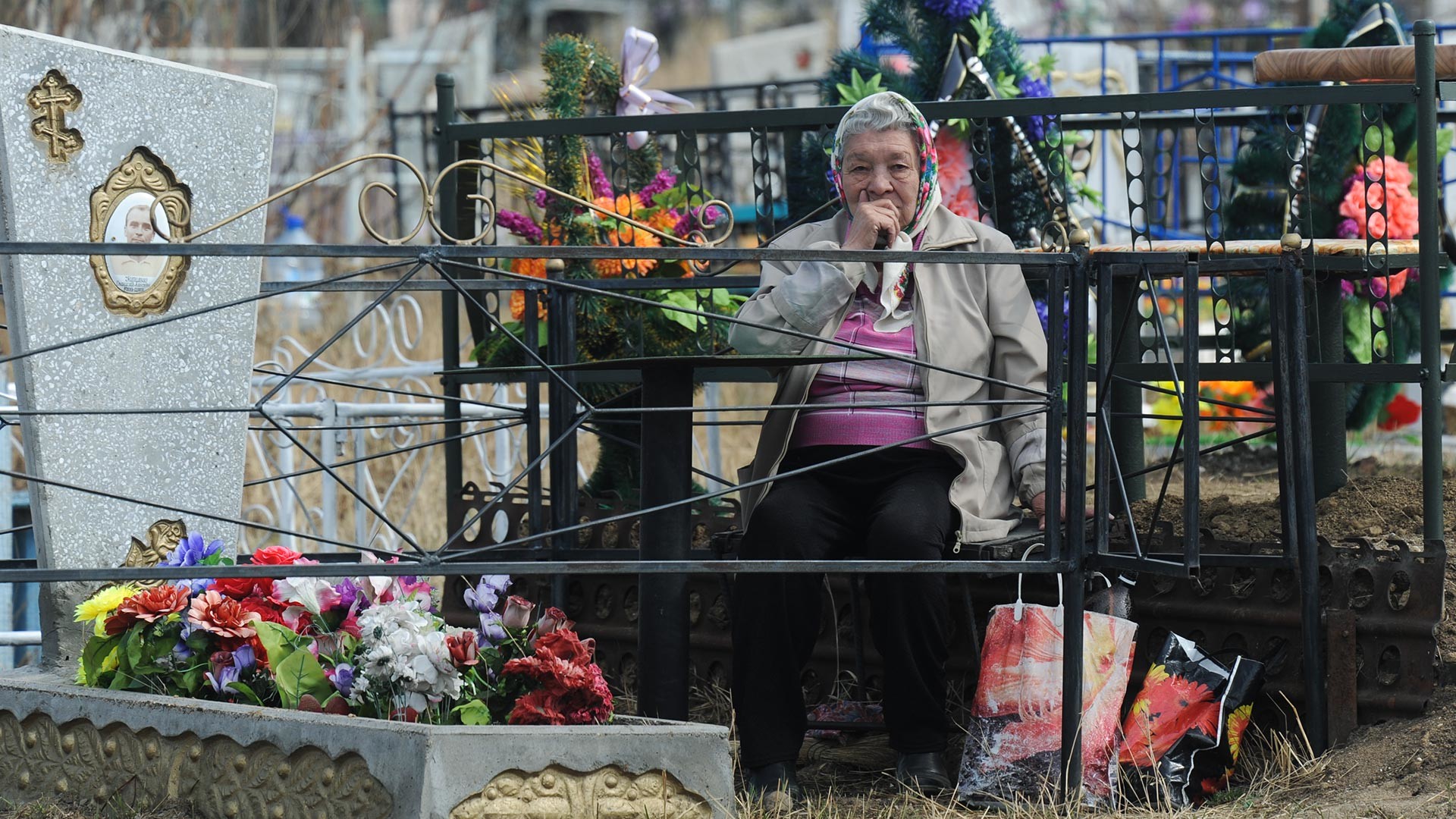 A Russian woman at a cemetery in Chita.

In Russia, cemeteries are never open and jolly, they don’t have wide lanes where you can bike or jog in the morning – the cemeteries are not considered the place for pastime. Even visiting graves is kind of formalized – traditionally, relatives would commemorate their deceased on their anniversaries or feasts such as Soul Saturdays (there are 5 of them in the Russian Orthodox tradition).

Talking loudly, laughing, singing at the cemetery would very soon bring you under harsh criticism from any babushka or somebody else at the cemetery, including cemetery workers. In Russia, still very strong with undertow pagan traditions, you don’t bother the dead.