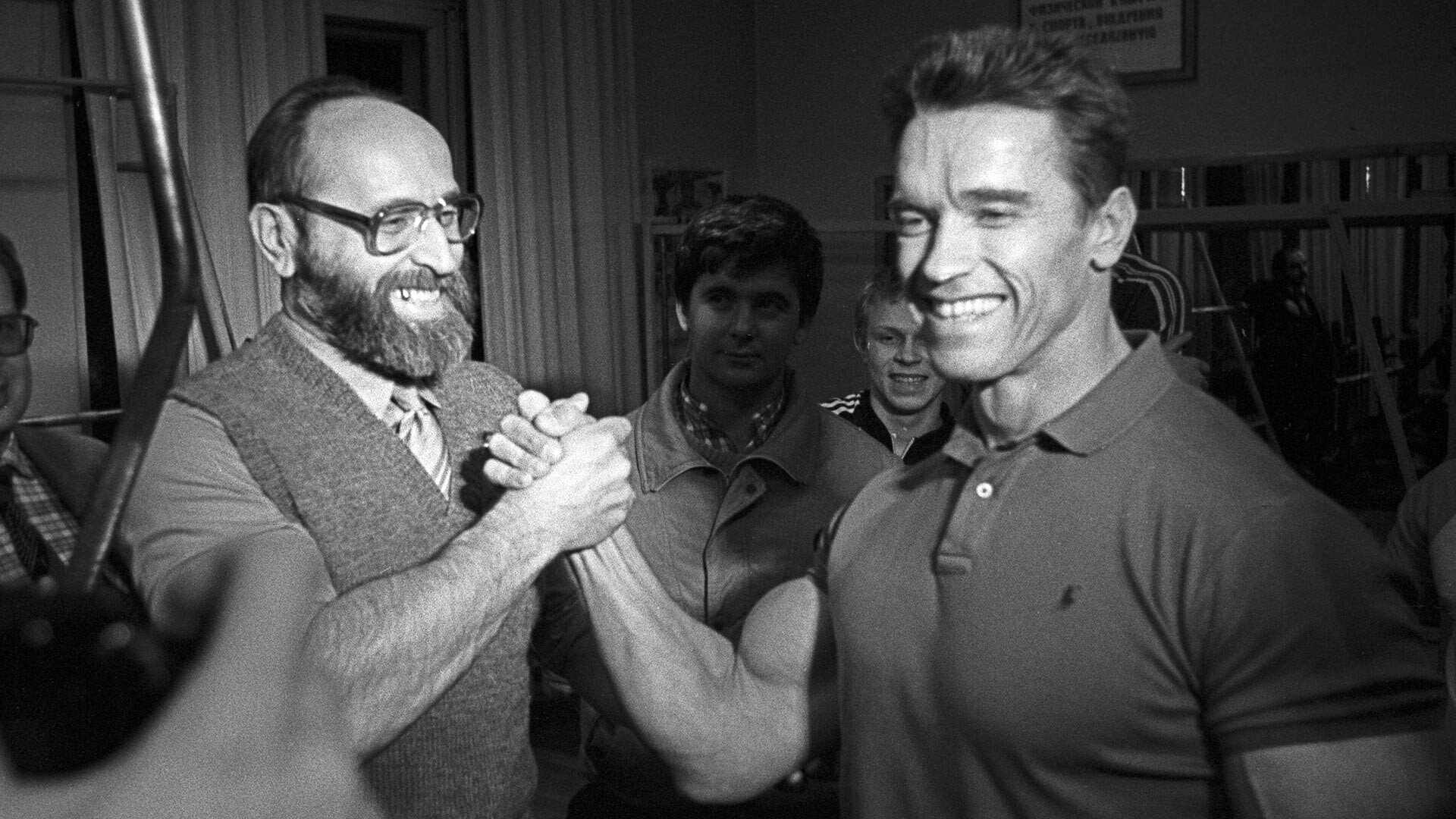 Mashatin/Sputnik
Yuri Vlasov was an extraordinary man with many talents: he was the greatest powerlifter of his time, as well as an intellectual, an author, a journalist, a politician and even a Russian presidential candidate. He drank vodka with Yuri Gagarin, lifted Fidel Castro up like a child and was the flag bearer for Russia at the Olympics.

In February of 2021, Hollywood superstar and former governor of California, Arnold Schwarzenegger wrote a message on Twitter about the passing of Yuri Vlasov, who he called his inspiration when he was a young weightlifter. Vlasov’s life story explains why Schwarzenegger said that “it is because of people like him that I refuse to call myself self-made”.

Yuri Vlasov was born in 1935 in Makeyevka, a small city in the USSR (now Ukraine). He had a tough childhood, which makes his accomplishments – among which were 31 weightlifting world records and writing over 15 novels – even more admirable.

Vlasov’s parents were considered intellectuals. His mother, who had Cossack roots, was the head of the library in Makeyevka. His father, a descendant from Voronezh peasants, was a Soviet intelligence officer and diplomat in China during World War II.

During the war, Yuri Vlasov was evacuated as a child to Siberia, together with his mother and brother. There, he was confronted with horrific sights of wounded people, as well as extreme hunger. Yuri was so badly malnourished that, in 1943, he lost his hair at the age of eight, as he described in his book ‘A Confluence of Difficult Circumstances’. One can only imagine how much stronger he would have been in later life, if he hadn’t been exposed to such famine at such a young age.

When World War II ended, Yuri went to study at the Suvorov Military School in Saratov from 1946 till 1953, where he quickly regained his strength. As a young cadet, he started to practice sports with his schoolmates. Soon, it became clear that he was unmatched by his peers in wrestling, push-ups, pull-ups and long jumps. 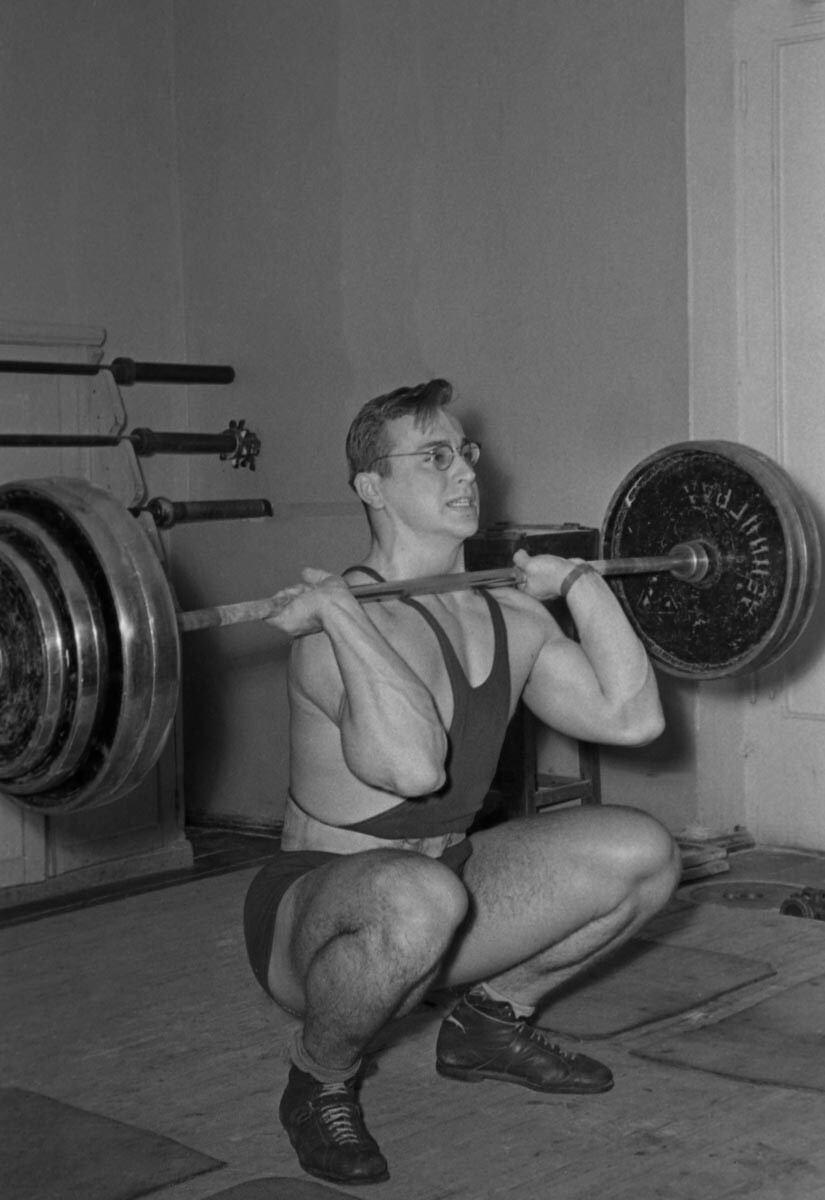 After finishing military school, he proceeded to study at the Zhukovsky Air Force Engineering Academy in Moscow. There, he started weightlifting, but didn’t fall in love with the sport at first sight. Vlasov wrote in his book ‘Justice of Power’: “Kettlebell lifting repulsed me. What is fascinating about the monotonous pumping up of muscles! What a mind one must possess in order to find pleasure in such smug exercises!” 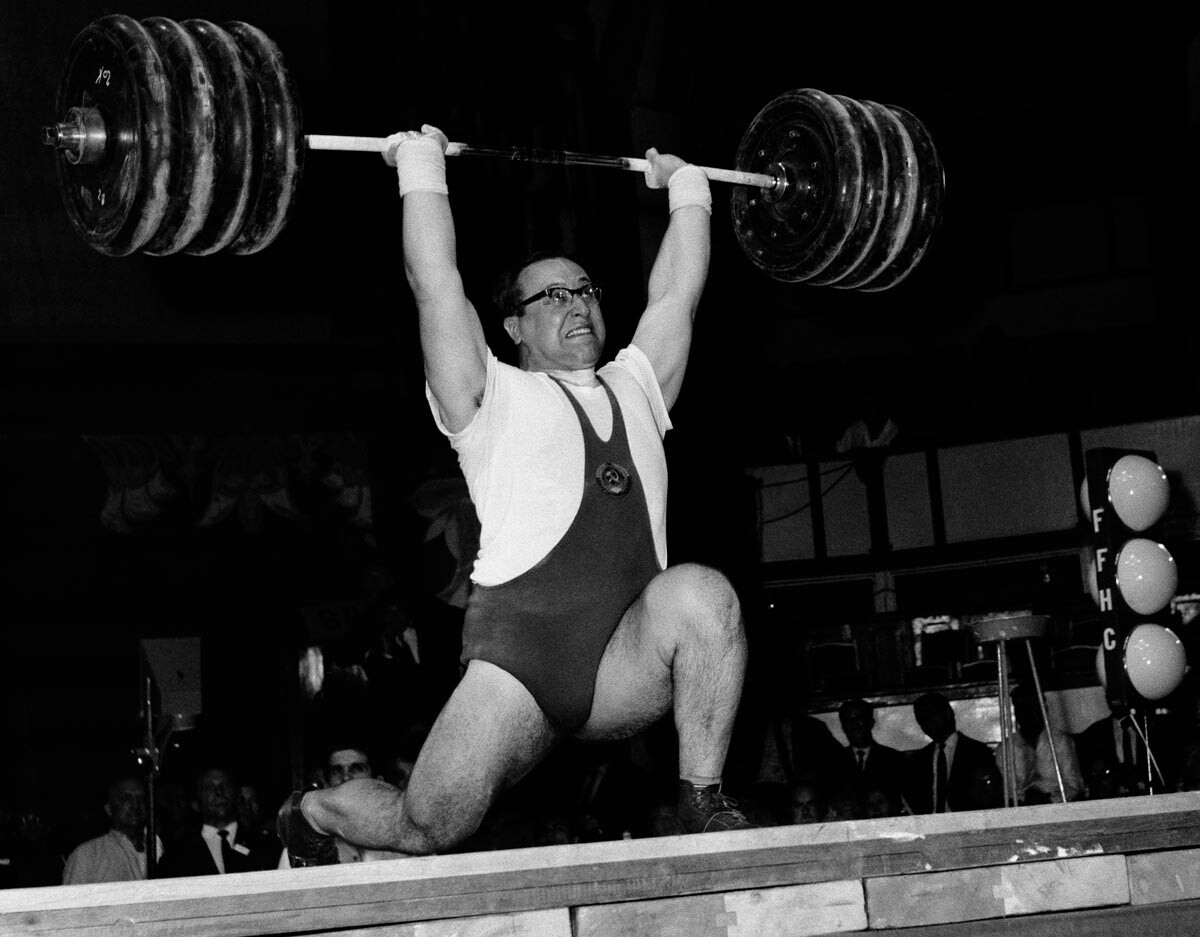 Vlasov was heavyweight Olympic Champion in 1960

Nonetheless, he kept on practicing: “During the first months of training, I looked closely at the barbell, while I stood in shyness in front of it. I began to squat without effort with two hundred kilograms on my shoulders. I could raise leg strength to any level. No matter how much I trained, it never happened that I stumbled upon the limit of my strength,” Vlasov wrote. 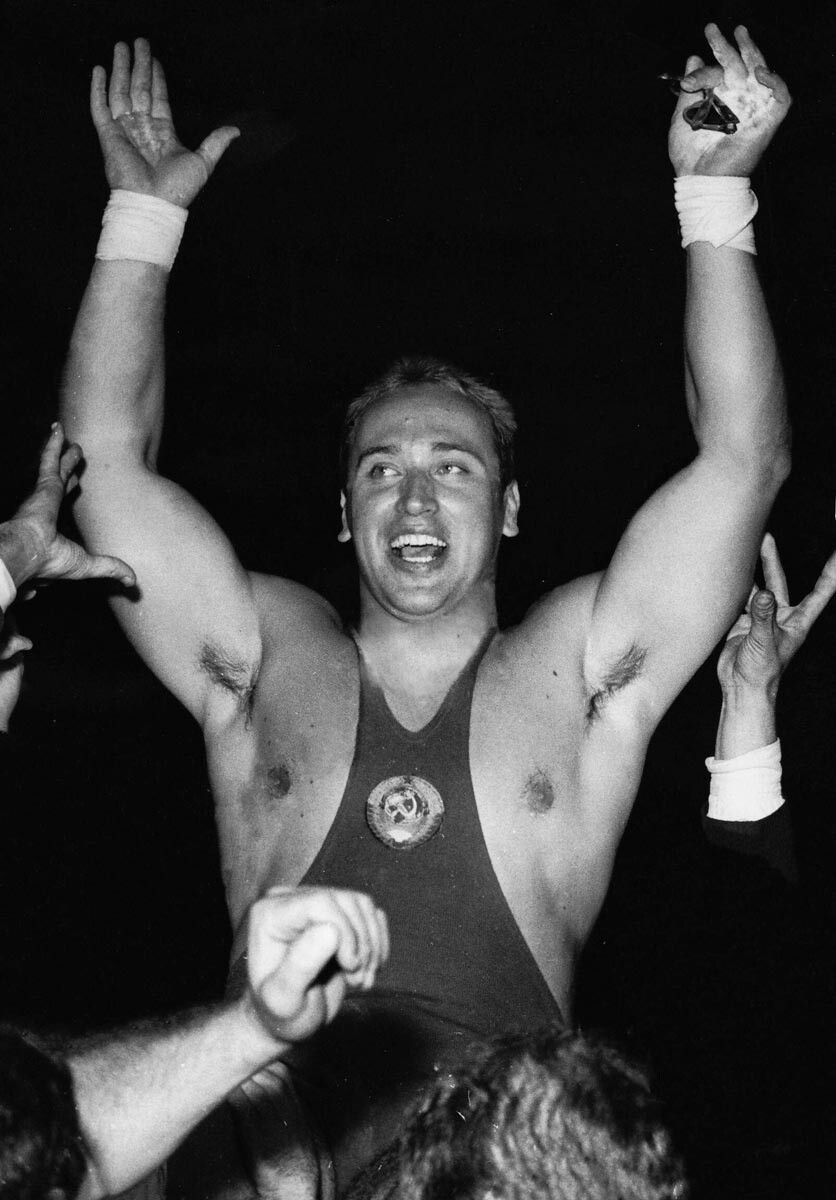 As time passed, Vlasov graduated with honors and his body transformed into one of a true “Russian bear”. Just as Schwarzenegger, Vlasov had an idol, too – American giant Paul Anderson, who had more kilograms in him than centimeters in height. In 1955, young Vlasov saw how Anderson crushed world records in front of an audience of 12,000 people in Moscow and lifted a total of 518 kilograms. Vlasov remembered Americans joking: “You have a satellite and we have Anderson!”

A year after his victory in Moscow, Anderson became the Olympic champion. Vlasov, inspired by his hero, was determined to beat Anderson’s records, but, unfortunately, a show-down between the two titans would never take place. Anderson left the sport shortly after the Olympics in 1956. 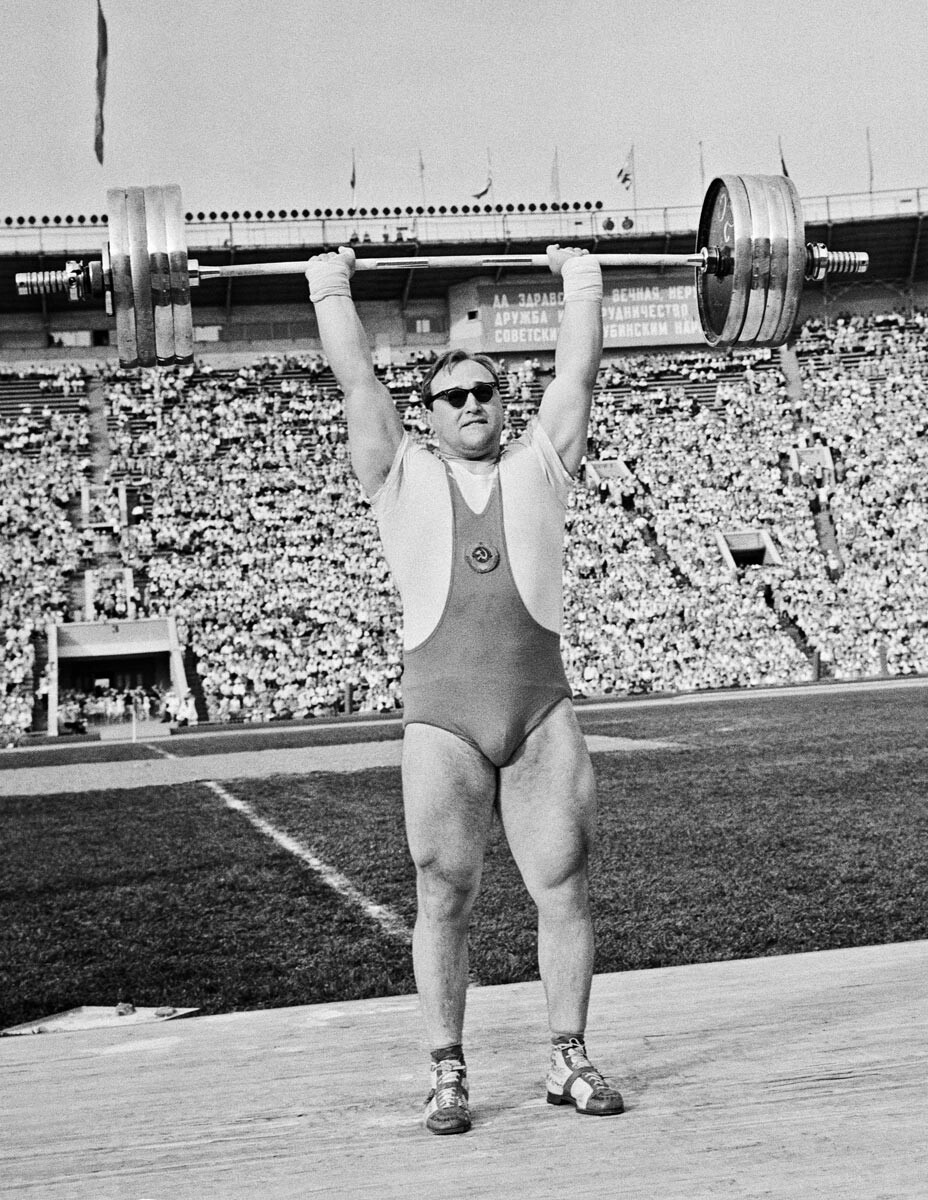 Just a year later, at the age of 22, the still unknown Vlasov broke all records in the snatch & clean and jerk. And although his achievements were soon surpassed, it became clear that a new star had risen in the world of weightlifting.

Vlasov said during a Russian interview that his coach was “greedy for new records”. He would not disappoint him: In the years that followed, Yuri won four world titles, set 31 world records and won 11 Olympic gold medals. The price for the hard training and victories was a lifelong spine injury, which would nearly kill Vlasov during surgery in 1986. 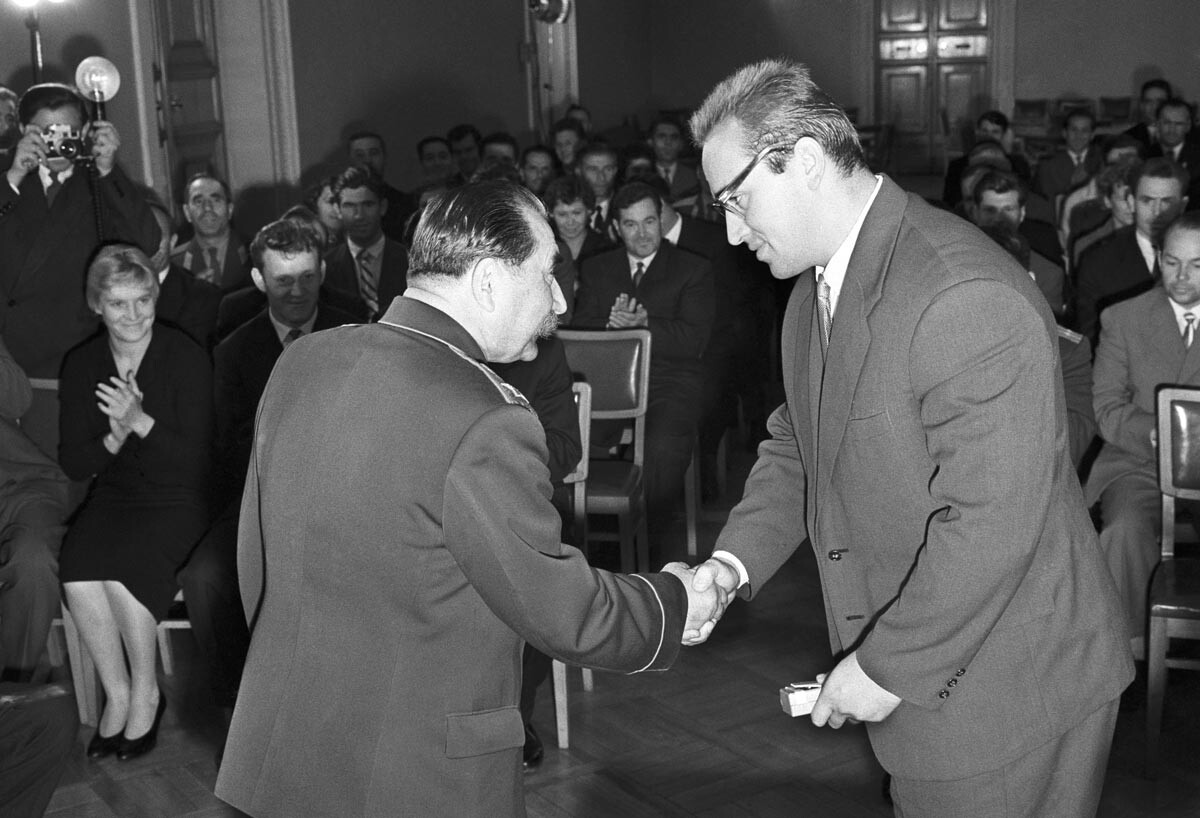 Member of the Supreme Council Semyon Buyonny awards Soviet weightlifter Yuri Vlasov the Order of Lenin in the Kremlin, 1960

At the 1961 World Cup in Vienna, Vlasov was approached by an uncertain young and thin boy when he was resting between sets. Vlasov was annoyed that the young fan was disturbing him during a competition. “But we talked and he seemed inspired,” Vlasov stated. Yuri would have appreciated the story of how the thin boy then went to press metal even on weekends, putting a stepladder against the wall and climbing in through the window to train. His name was Arnold Alois Schwarzenegger.

When Schwarzenegger would come to Russia to shoot the movie ‘Red Heat’ in 1988, he wanted to do two things: buy a fur coat for his wife and shake the hand of his idol who pushed him towards Hollywood stardom. 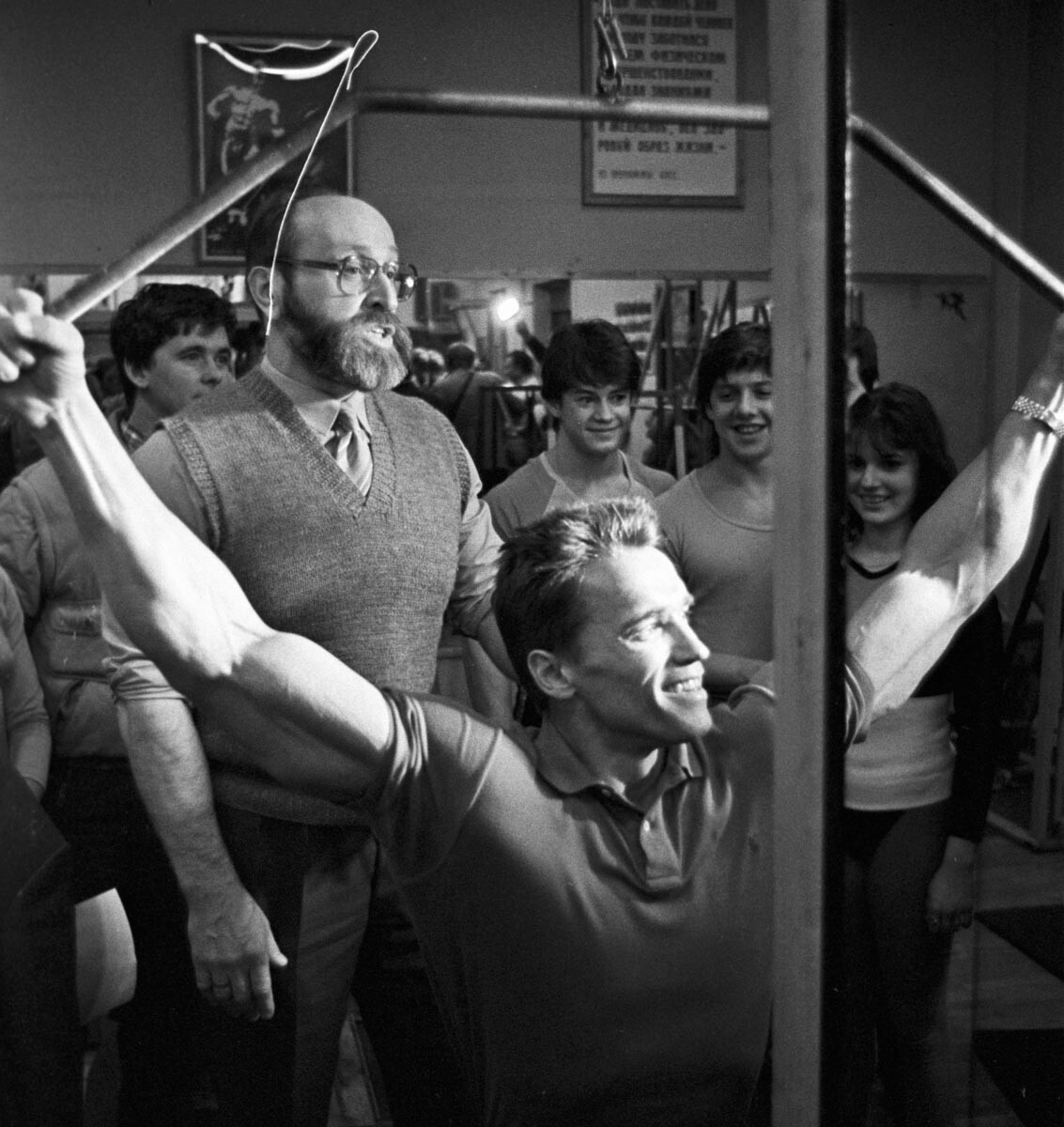 Arnie meeting his idol, Vlasov, in 1988 in Moscow

Arnold was not the only superstar who crossed paths with Vlasov. In 1961, president Khrushchev invited him to the Kremlin for a New Year party. All of a sudden, Vlasov’s namesake and even bigger star, Yuri Gagarin, showed up with a bottle of vodka. “Yur, I will drink with you, he said. Everyone was stunned! We spent the whole New Year sitting together drinking,” Vlasov recalled.

Another remarkable meeting took place when Fidel Castro received a Soviet delegation, which included Vlasov. Castro was taunting Vlasov until he decided to lift ‘El Commandante’, who weighed about 90 kg, by grabbing him under his armpits and putting him aside. Castro was offended by this move and said during dinner that no matter how much you put on a plate for Yuri, it’s still not enough for him, and that he needs a truck to get around. 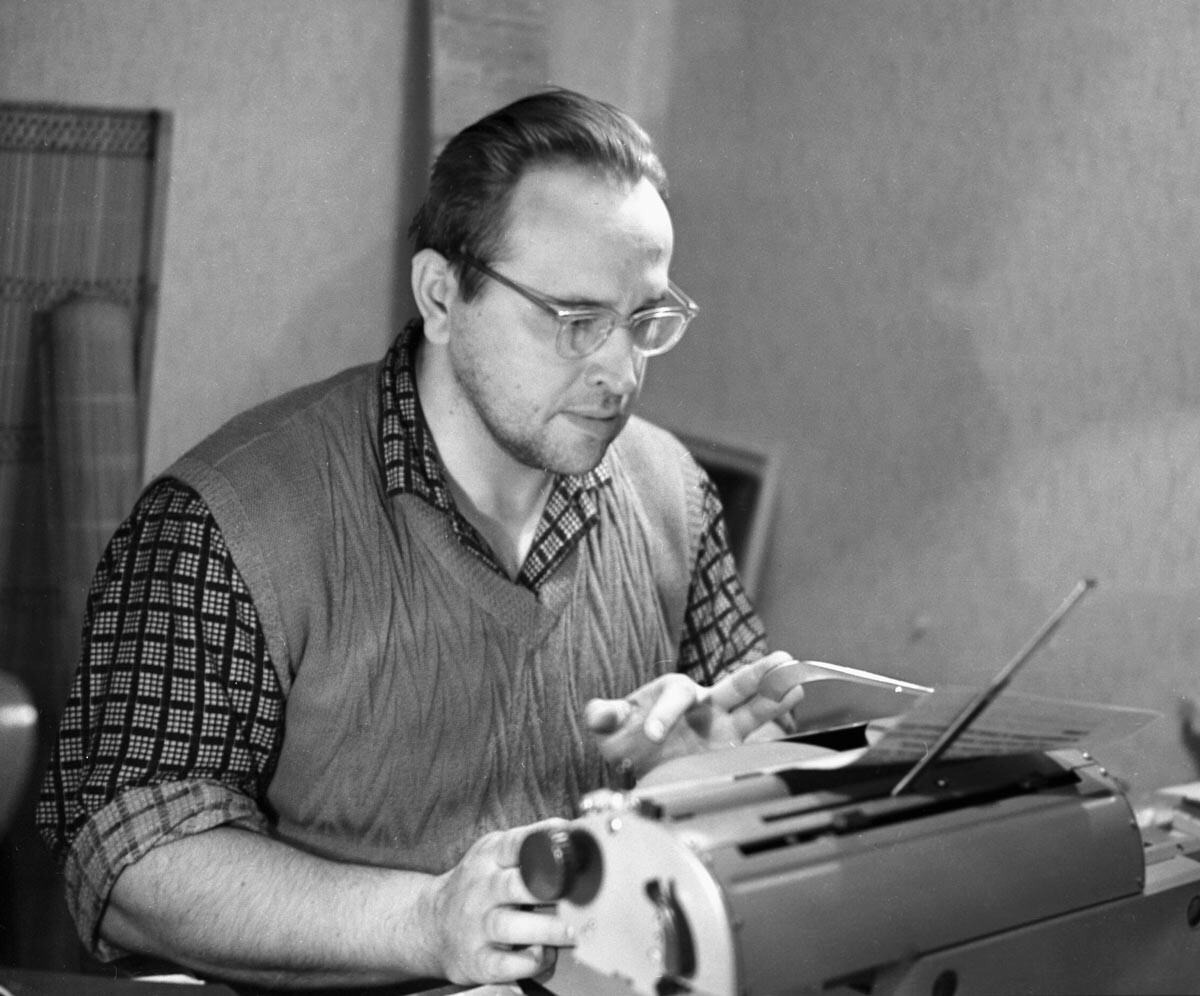 Yuri Vlasov working on his book, 1968

Stories about Yuri Vlasov can fill books. And so, he wrote them. Vlasov was known not only as a muscleman, but also as an intellectual powerhouse. He found literature the most beautiful thing in life. In an interview from 2021, his daughter stated: “He wrote a lot. […] Dad generally wanted to be a writer more than an athlete.” Vlasov published over 15 novels and wrote numerous journalistic articles and fictional stories. He plunged into archives and diaries of his passed father, resulting in the publication of historical Soviet literature. 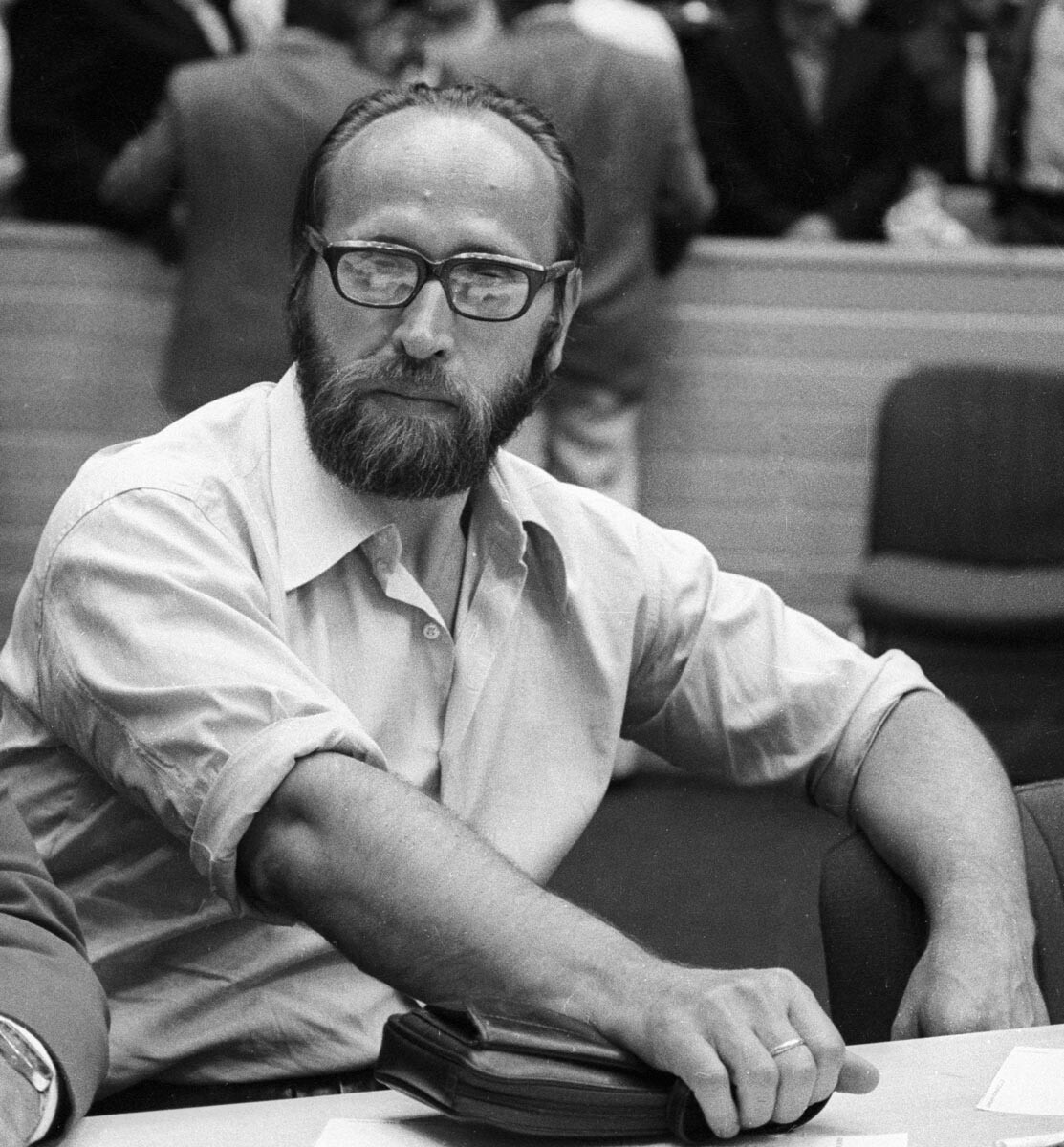 Furthermore, Vlasov became a presidential candidate in Russia in 1996 as an opponent to Yeltsin. In later life, he said in an interview that his high-profile victories in sports made this step possible, but due to certain “circumstances”, he knew he could never win the election. 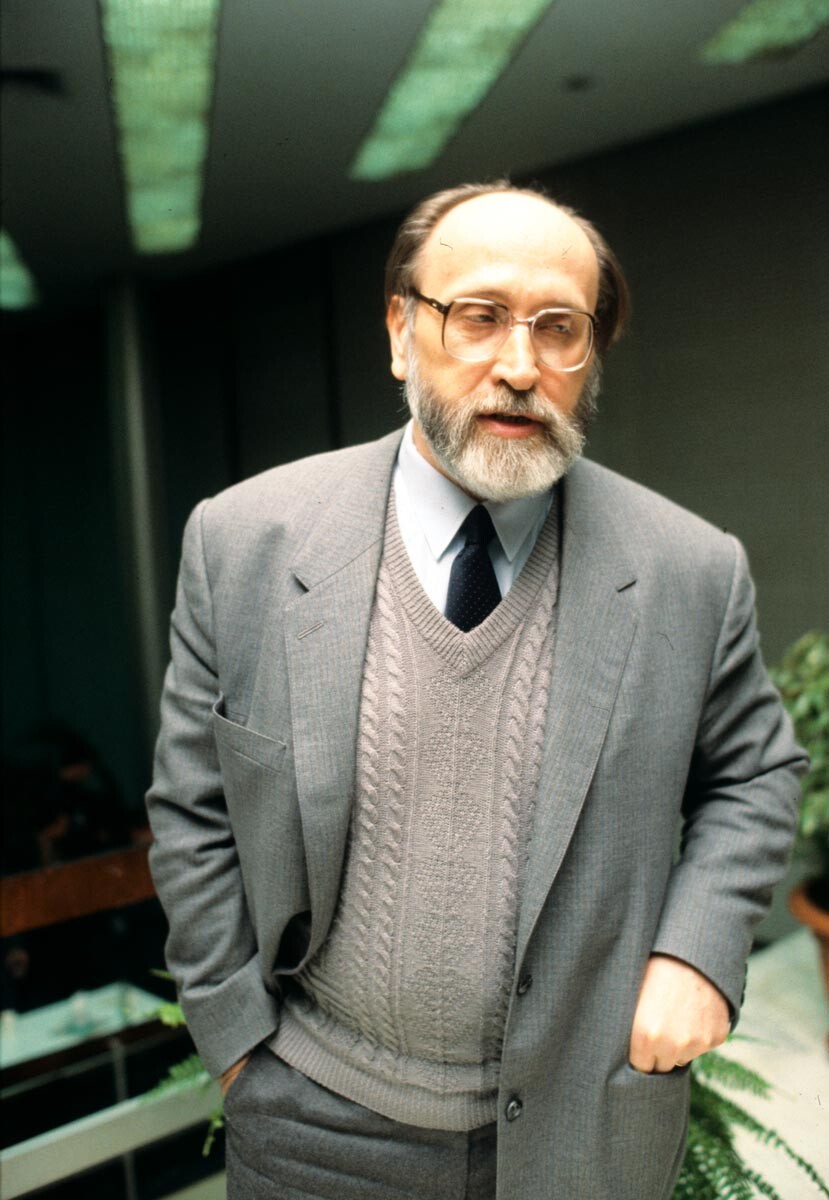 Yuri Petrovich Vlasov died of natural causes at the age of 86 on February 13, 2021. He could still lift 185 kg when he was over 70 years old. But, he left far more behind than weightlifting records. He left books and thoughts which continue to inspire people all over the world.