How I dived into ICY water in -10°C on Epiphany 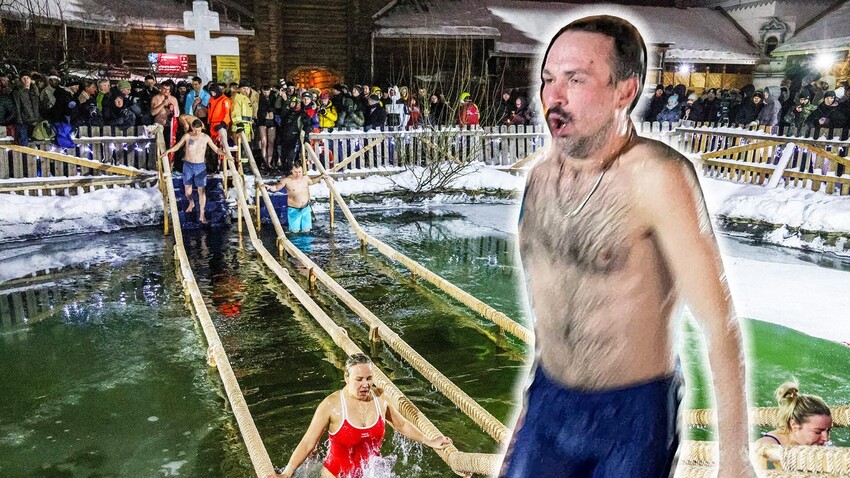 Russia Beyond (Photo: Private archive; Gavriil Grigorov/TASS)
One of our correspondents dived into an ice hole on the Orthodox Epiphany holiday and recounts what he experienced. Surprisingly, it is not only a icy leap of faith, but also a healing procedure that has been familiar to Russians since ancient times.

Guys were exchanging jokes just after emerging from freezing cold water. My friends and I were inside a big inflatable tent, where men were getting changed before plunging into the nearby ice hole. For the first time in my life, I decided to follow the ancient Russian tradition of jumping into icy water on the feast of the Epiphany – January 19. From an outsider’s point of view, what my friends and I were going to do looked life threatening – but, as we soon realized, diving into an ice hole is not a terrible, but an exciting adventure!

The temperature that night dropped from -3 to -10 degrees Celsius and at a quarter past 11 PM, when we approached the shore of Golovinsky Pond in Moscow, the frost was already seriously pinching my nose. The first thought that came to mind – you need a drink to warm up! But, drinking before diving into an ice hole is an extremely stupid idea. Warmed up by alcohol, the body is subjected to a strong stress as a result of the temperature drop and the heart will have a hard time. Therefore, contrary to stereotypes, there were no drunks or noticeably drunk persons near the ice hole at all. 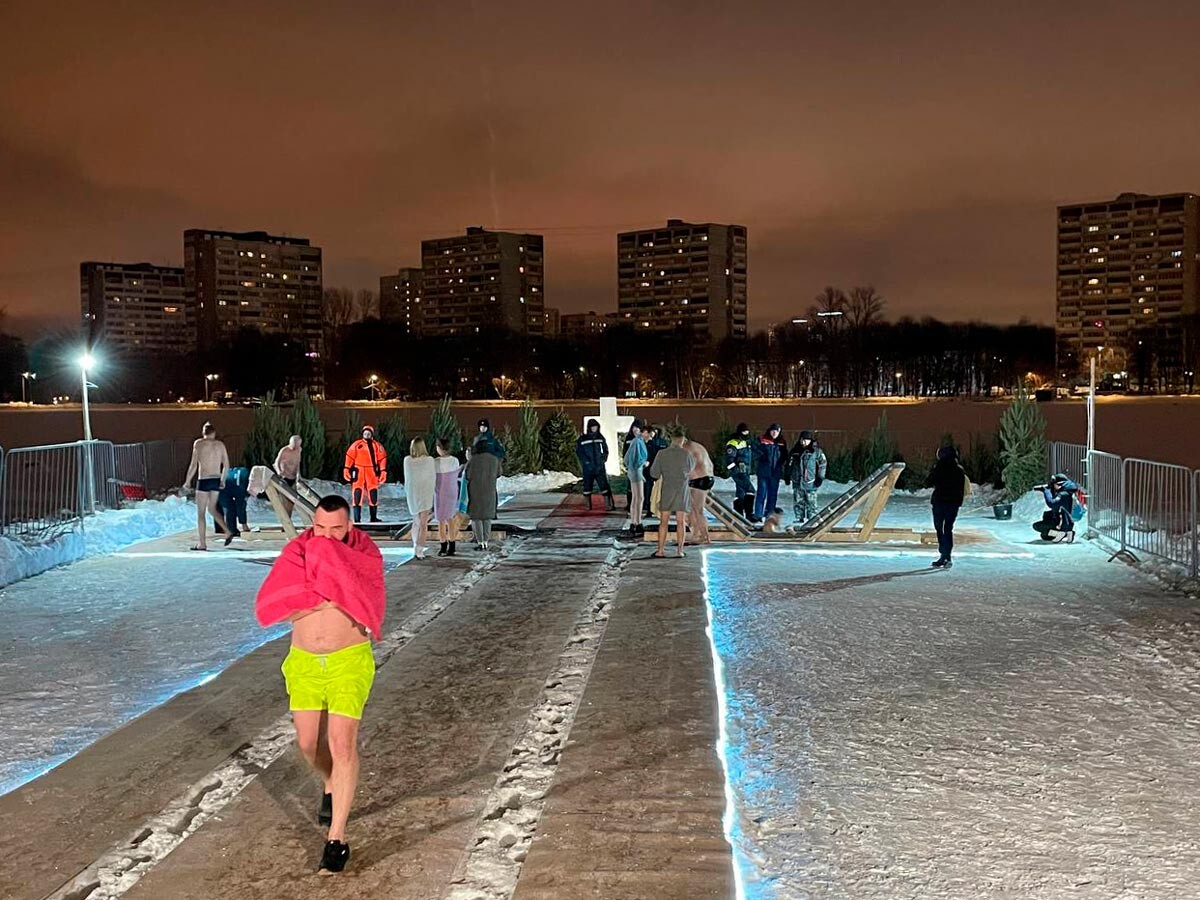 The ice hole and the ice cross on the Golovinsky pond, Moscow.

The ice hole into which we dived is “local”, meant for the residents of the area. Looking around, I realized that Epiphany bathing unites a variety of different people. A middle-aged raver, balding, all in intricate tattoos, a gray-haired intellectual with his five-year-old son who clearly wanted to sleep, but his dad was adamant – diving in and no objections. A sturdy-built grandfather brought his 15-year-old grandson, obviously also an athlete, who, however, undressed reluctantly, while the grandfather filmed him on the phone (“Gramps, won’t you just leave me alone? Put your camera away! It’s freezing cold!” the grandson complained). A very wealthy-looking married couple; it was clearly visible that they had been diving here for years. Grandma and grandpa, who no longer dive, but came just for kicks, to look at the younger people frolic in the icy water. 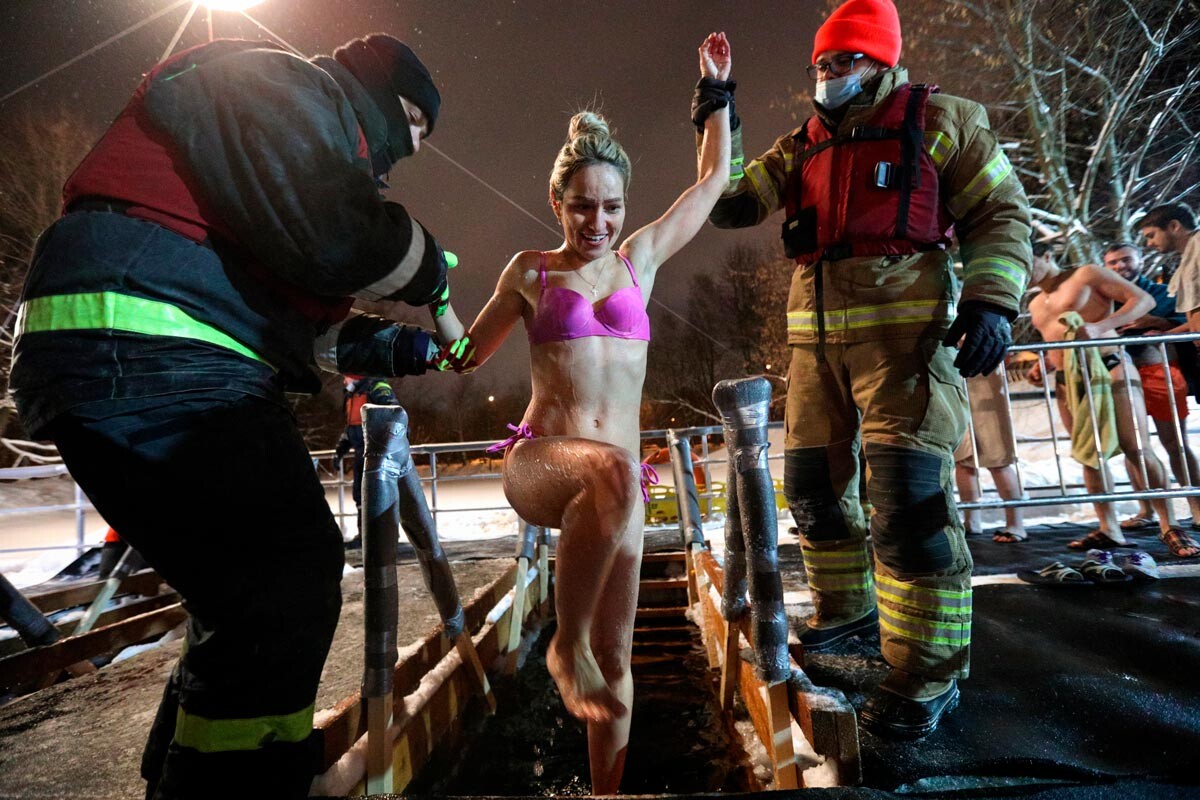 Oddly enough, there were no instagrammers taking selfies against the background of the ice cross. All the girls who came to the ice hole were here for the same purpose – to plunge. After all, it is very useful for the overall condition of the body and the skin, so girls were there for a unique beauty procedure. But we didn't really watch them, we came to dive.

But, there were almost as many policemen as there were bathers themselves – as well as employees of the Ministry of Emergency Situations and the lifeguards. As the police told me, they were there to make sure that “drunks do not climb into the pond”:

“As last year, we are on duty here this year, making sure that there is no bathing in unsettled places. If they drown, then it will be us who have to fish them out of the pond!” 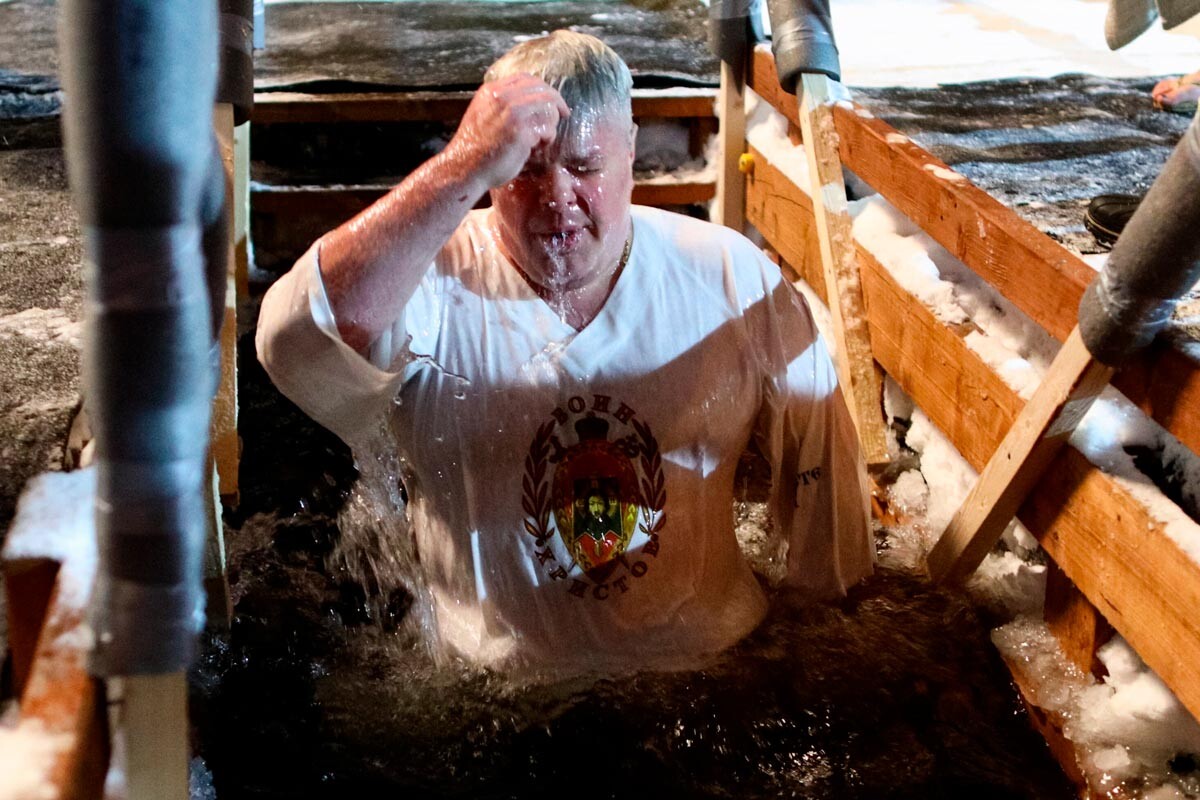 However, that night, the police and the lifeguards were rather bored, looking at the revelers with poorly concealed envy. They would have dived cheerfully themselves, but they had to freeze, shifting from one foot to the other – surprisingly, it feels colder to stand in clothes than to be naked in the cold!

This is the main secret of Epiphany bathing, which we felt right away as we undressed to dive. As soon as I took off my puffer jacket and two sweaters and went out on the ice in slippers and a bathrobe, my body immediately turned on the emergency mode; the feeling of cold disappeared, a cheerful excitement appeared – I was about to dive into the ice hole! The sight of men and women who had just climbed out of the water, steaming profusely and smiling, only spurred my enthusiasm.

Russia Beyond correspondent plunging into an ice hole.

In a blink of an eye, I found myself near the carefully organized entrance to the ice hole, crossed myself and dived in – three times, as the tradition prescribes.

Surprisingly, I didn’t even want to get out right away – however, I had to give way to the next in line. Steam rose from the body and my head immediately cleared. 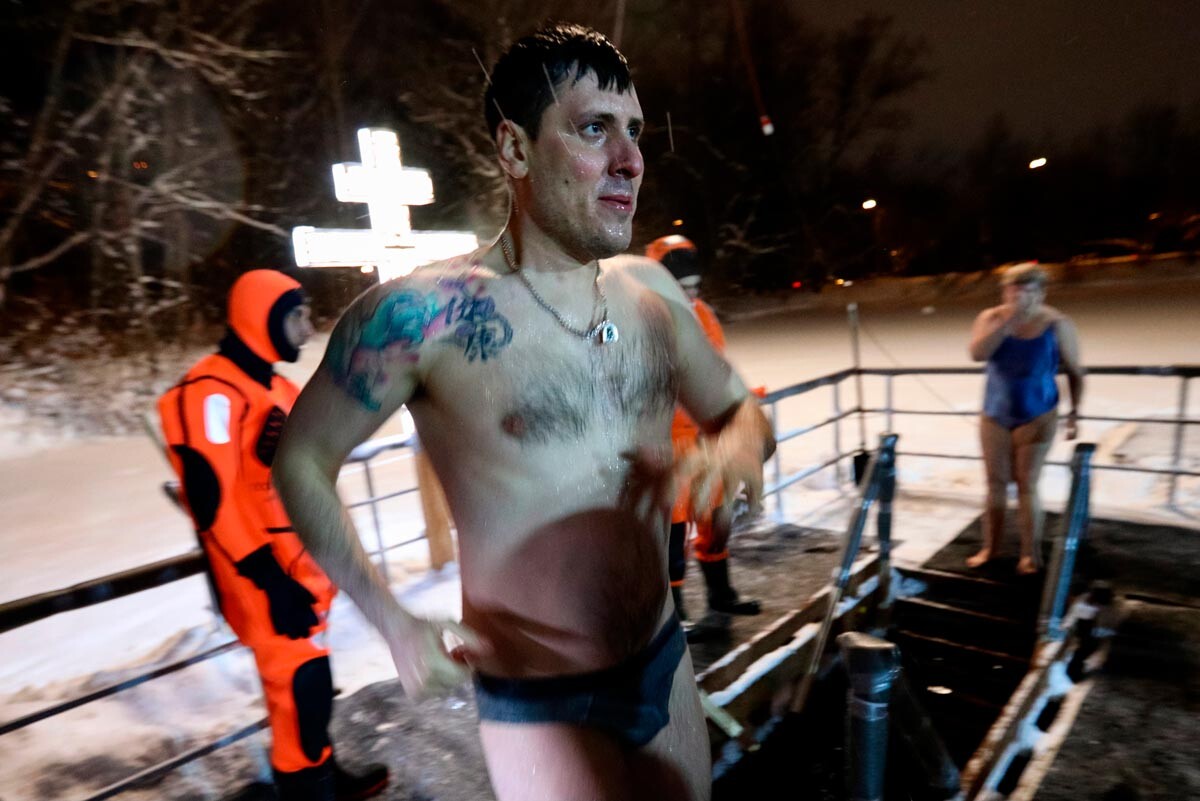 “Well, actually, wow!” A lean blond man of about 50 addressed everyone at once and no one in particular. He got out of the hole right after me and my friends. “For the first time in my life, I decided to try it, and it’s a revelation!”

I could have said the same myself – and now it became clear why the men joked about “hot water” – right at the moment of the dive, it seemed scalding and now an incredible warmth spread through the body and all the limbs became lighter and smoother. I felt like a rag doll taken out of the water. Again, contrary to stereotypes, there was no desire to wash down the whole thing with alcohol, although we still drank a shot of vodka (you know, for prosperity)!

I got dressed and felt that I was really hot. And I also felt that I had received a powerful charge of energy for the whole next year. That night, I fell asleep instantly.