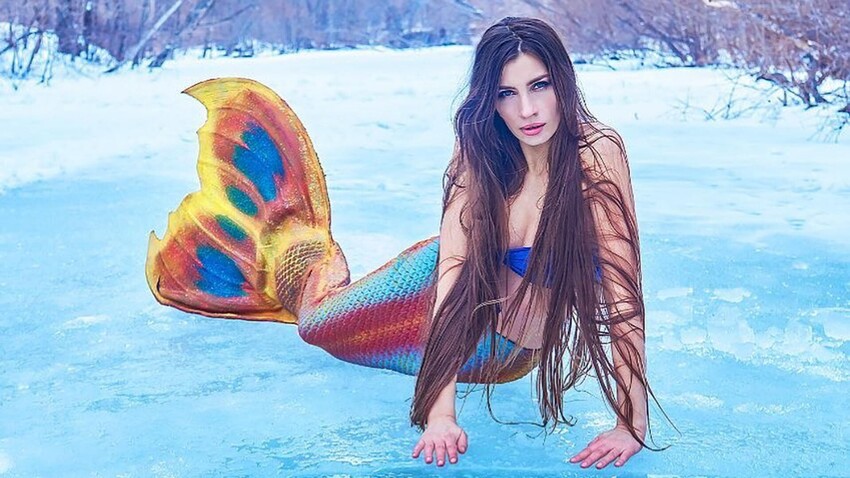 Tanya Khodova
This nurse from Vladivostok dives into the icy ocean and sews her own brightly colored tails between surgeries. We talked to her about how and why she does it.

Fishermen dressed in long winter coats huddle around ice-holes on the frozen sea. They squint uneasily at the half-naked girl with long hair and bright fishtail lowering herself into the water, where she remains for about a minute. The entire scene is captured by an accompanying photographer. 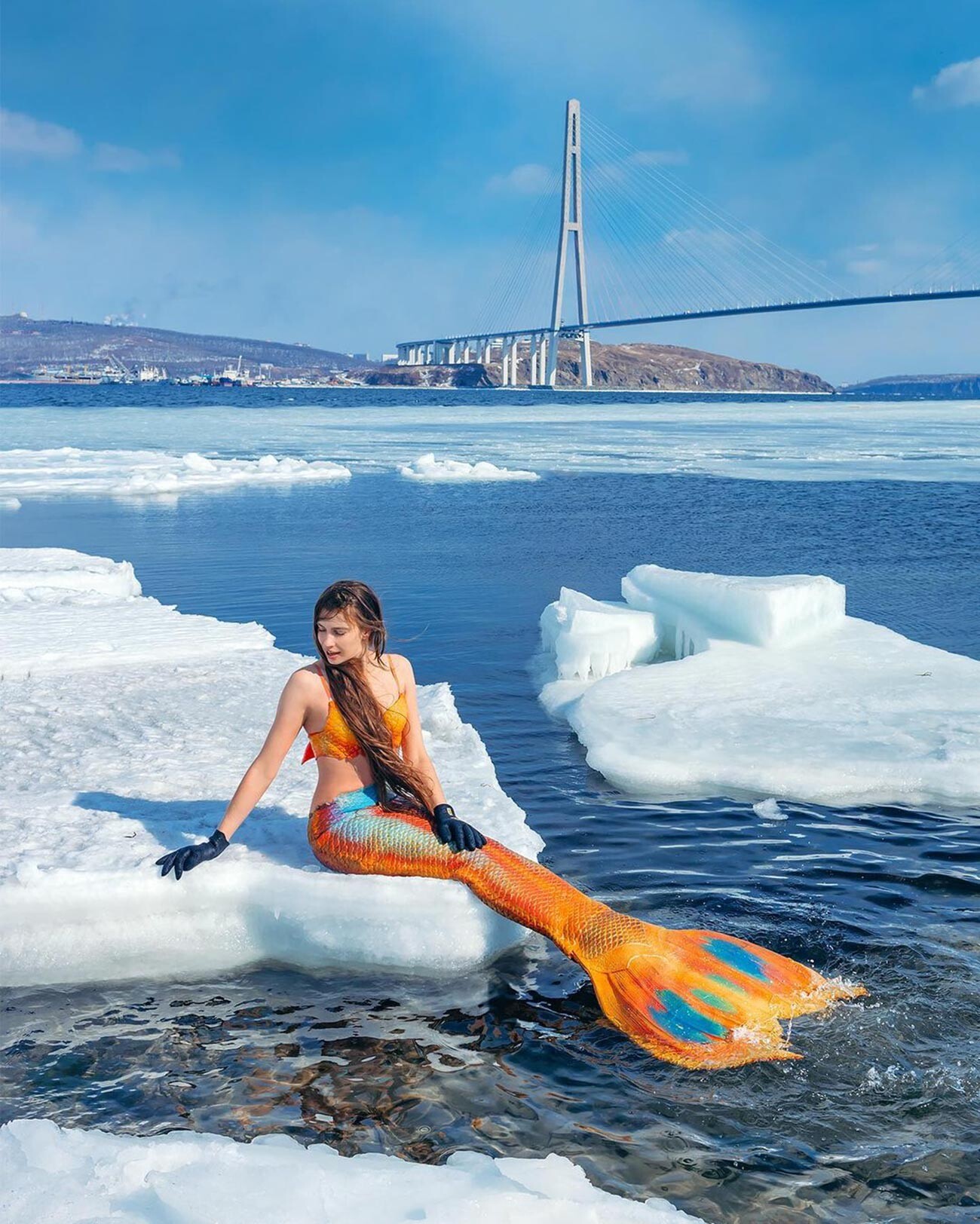 This is what Anastasia Slobodchikova, a 36-year-old nurse from Vladivostok, does most weekends. “I work as a nurse in a children’s emergency ward. Patients come in around the clock, the work is really tough. Plus I’m still busy with my medical studies. But my hobby is a great distraction and makes me happy,” she says. 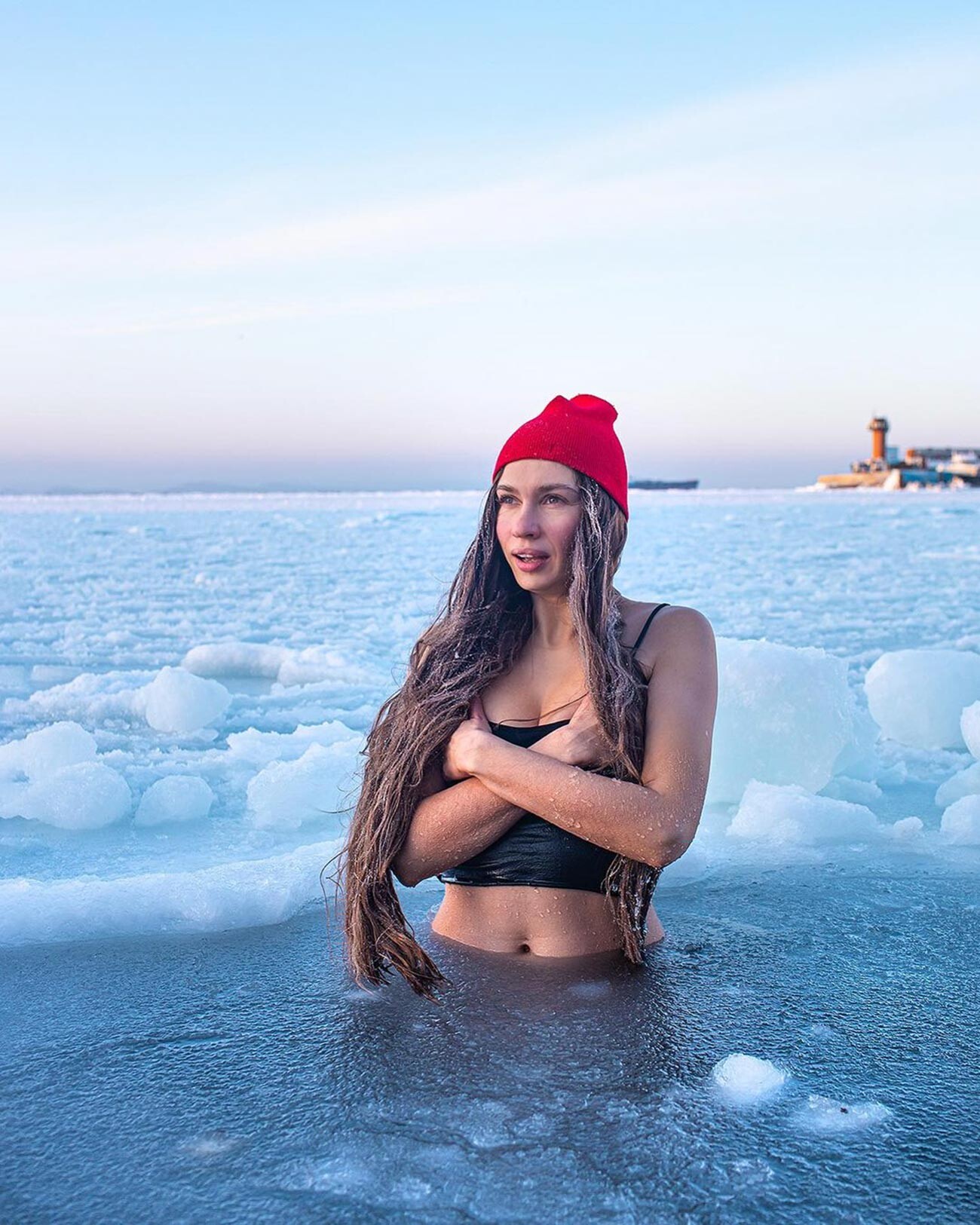 Her passions are modeling and winter swimming, which she combines in the persona of a mermaid. Once, Anastasia went to an underwater photo shoot, for which she decided to dress up as a mermaid. She made her first tail herself by simply sewing fabric over a monofin. Over time, the costume improved – her tail became silicone and looked more “natural”. Then she tried making her own from scratch.

“As a child, I dreamed of being a mermaid. I swam and dived a lot. It seems to have had an effect,” she says. 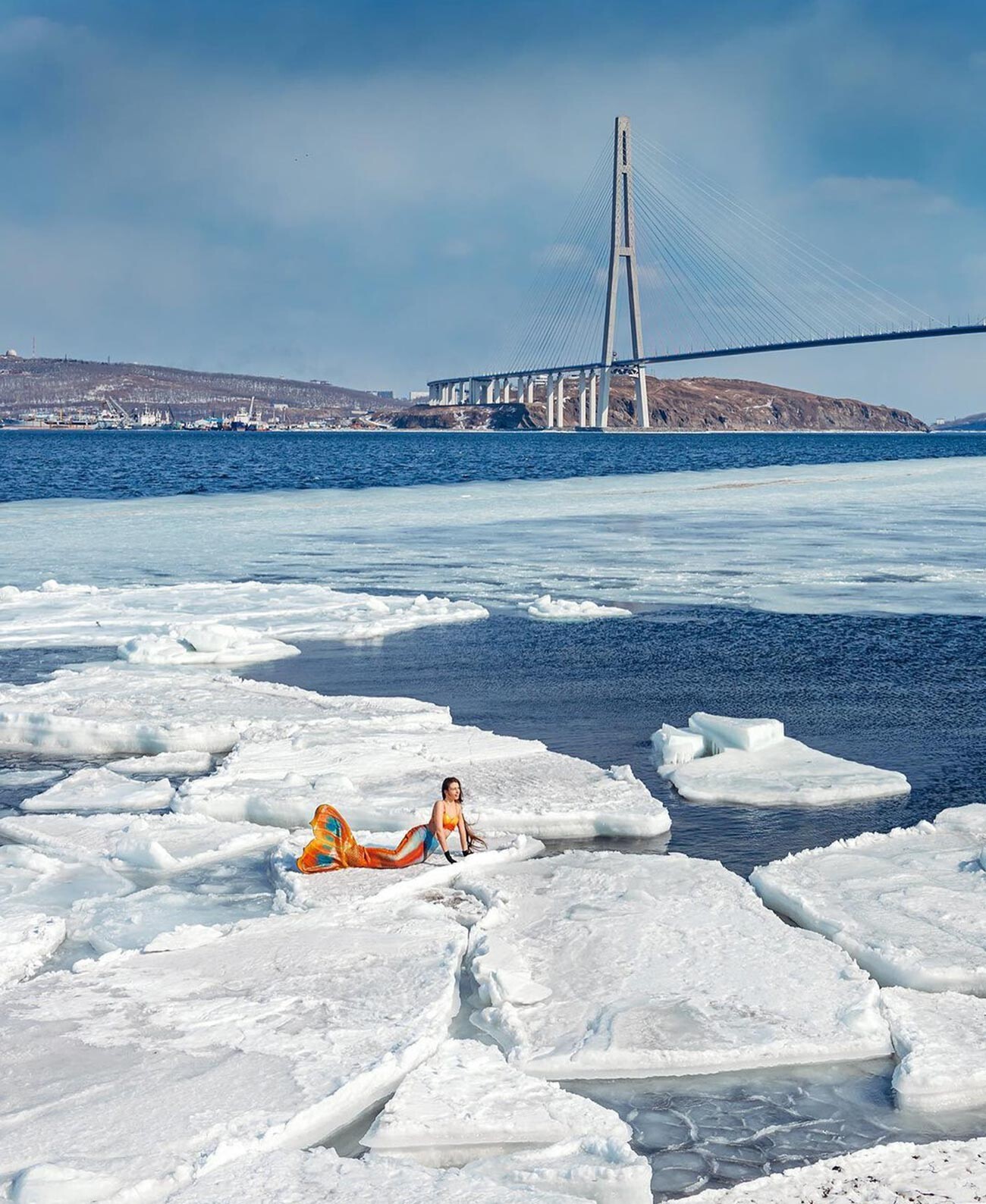 At first, Anastasia tried to create a mold with scales and a papier-mâché fin, but nothing came of it. Then she ordered a 3D model of a tail and had it cut out of plastic. “It all cost a fair amount, but that’s how I got the molds, which I then fill with silicone and use to make tails, my own, as if from patterns,” she says. 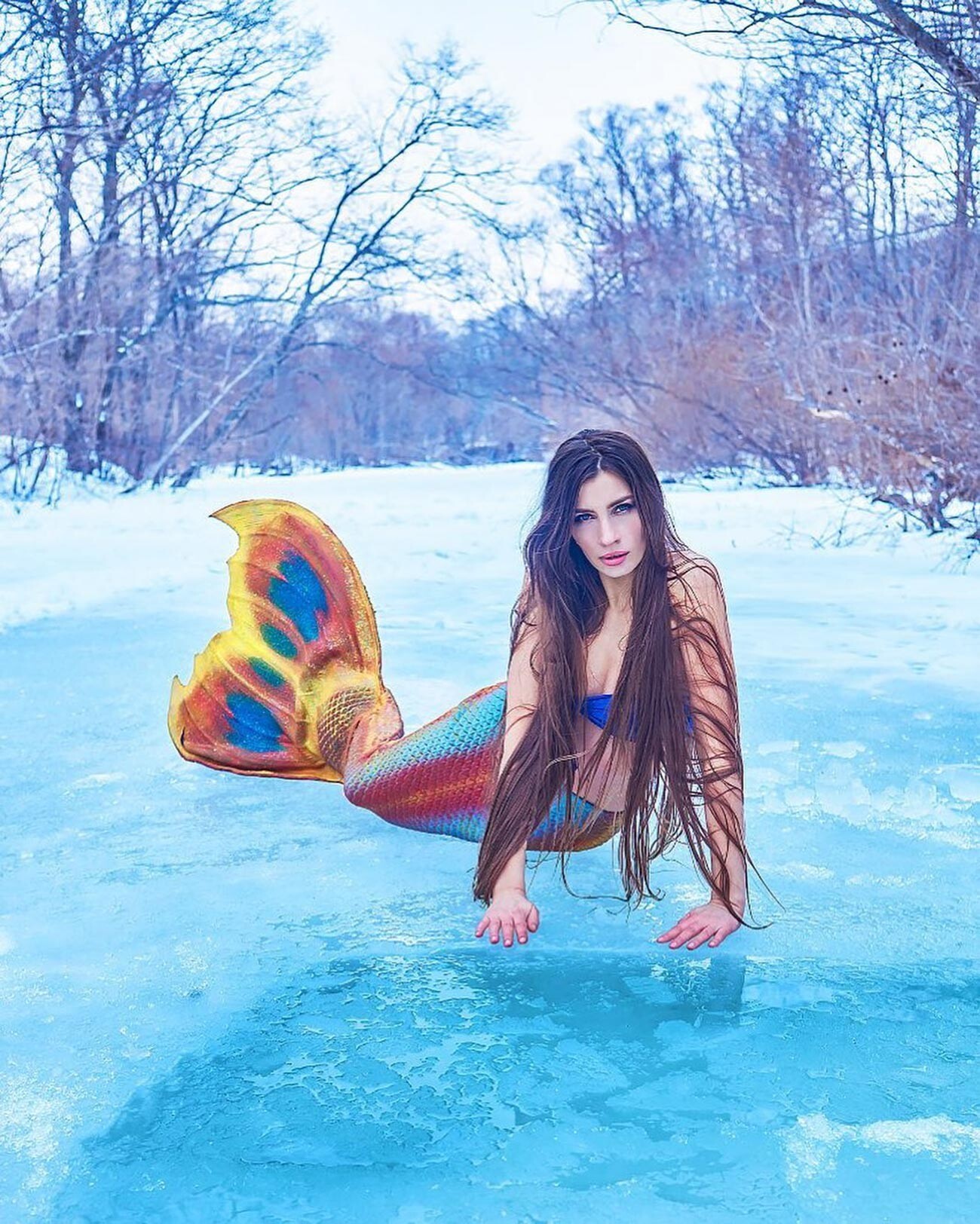 One tail costs about 70,000 rubles ($920) to make, and weighs 13–17 kilograms, depending on the design. “It’s very hard to wear on land, but in the water it’s cool. You feel like you’re gliding, like a real fish,” Anastasia says that she makes one tail a year. Her work schedule and studies don’t allow for any more. 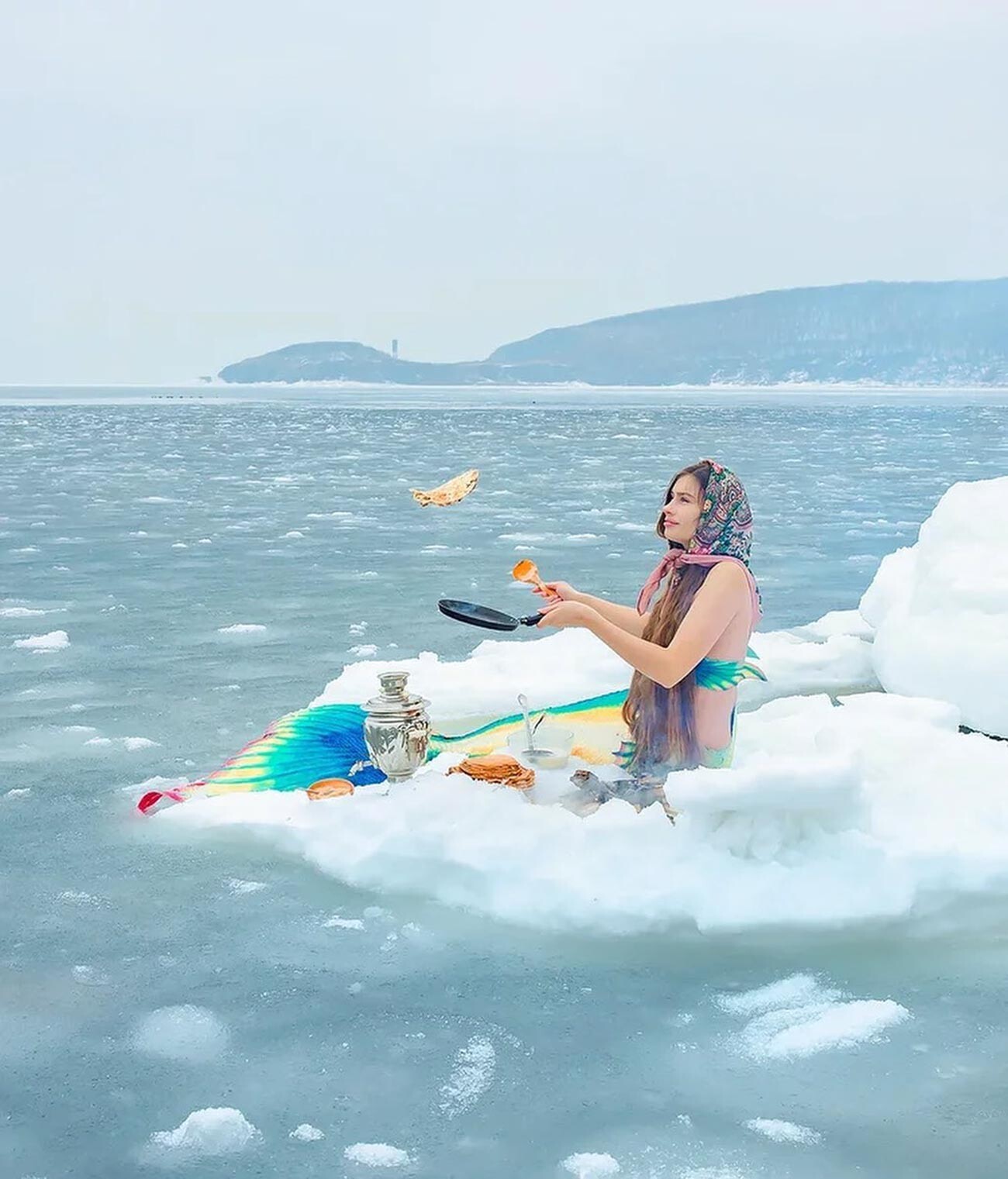 It was four years ago that she discovered winter swimming when a friend persuaded her to try it. “I refused for a long time, I just couldn’t imagine myself in the icy water. I really feel the cold. But when I dived into an ice-hole for the first time, I experienced such strong emotions and sensations that I wanted to do it again and again.” 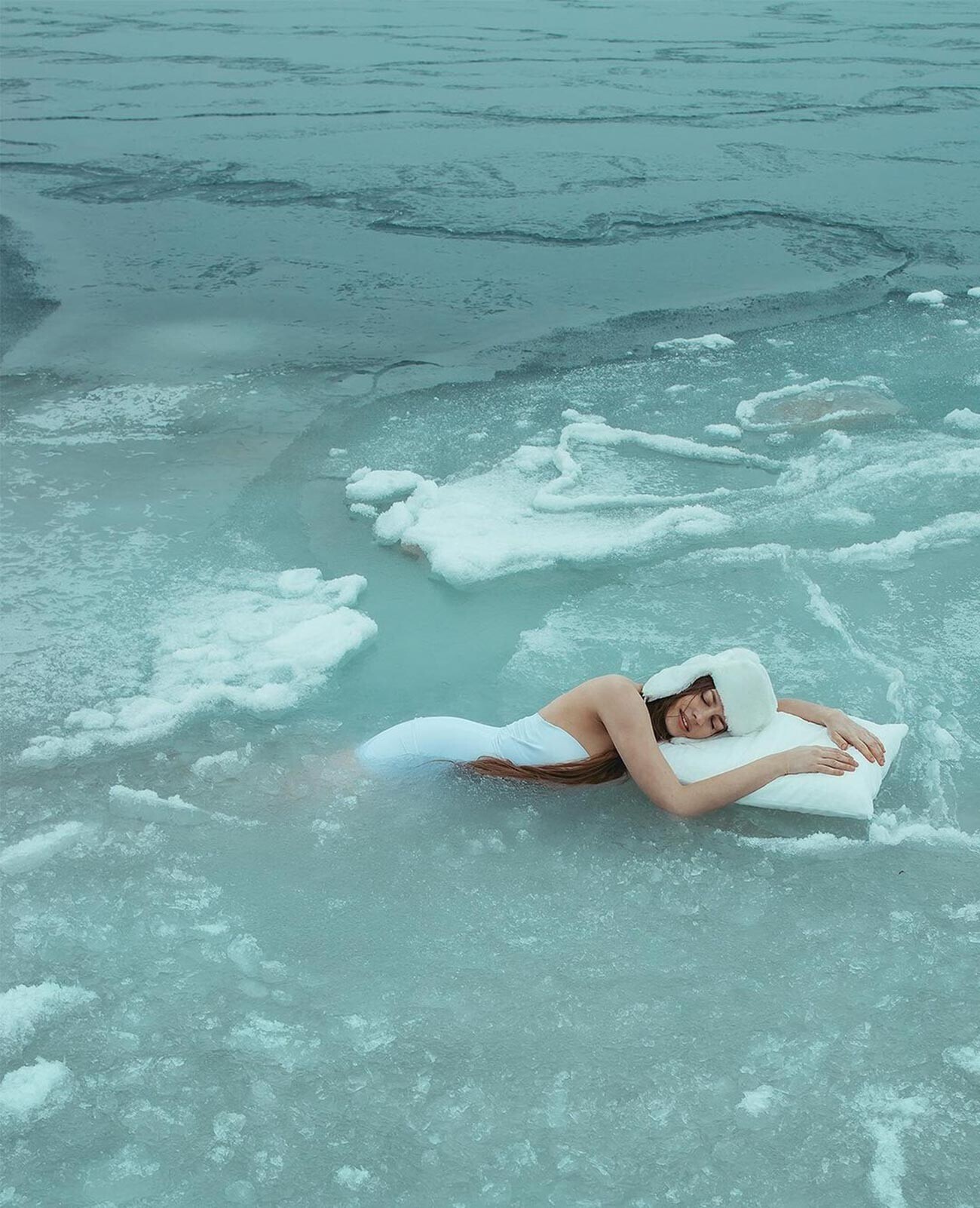 So, kitted out in her mermaid gear, she went swimming in the icy sea – and made a TikTok video of the event. In the video, in her trademark red cap, Anastasia dives into the water, ice floes floating all around, and says “Wow, that’s hot!”. Or, sitting on an ice floe attached to her mermaid tail, she fries pancakes and drinks tea from a samovar. She already has 700k+ followers and millions of views on TikTok. 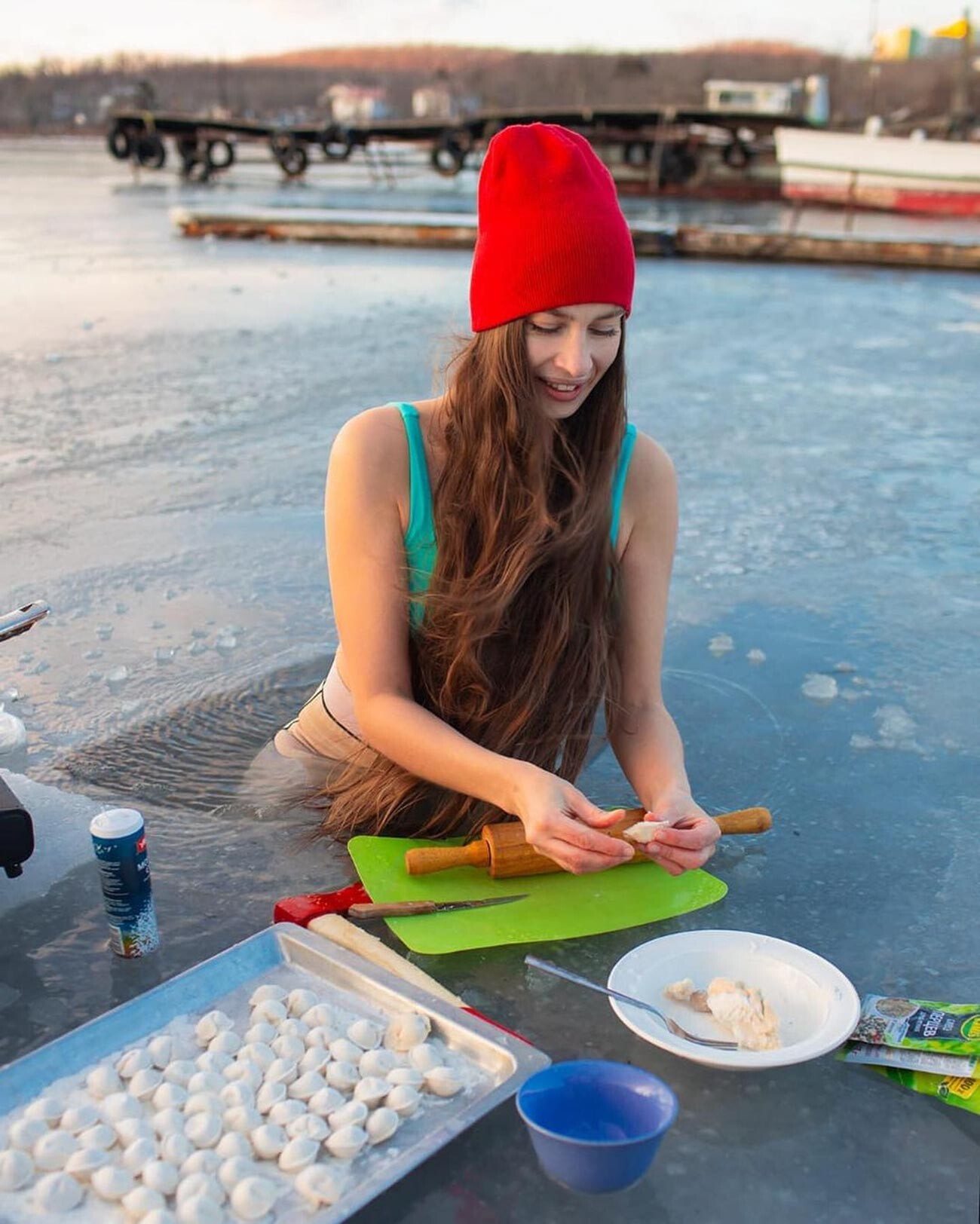 “‘Are you a real mermaid?’ is the most frequent question I get asked by the children. They try to catch me out, to get me to admit I’m not real,”Anastasia laughs. 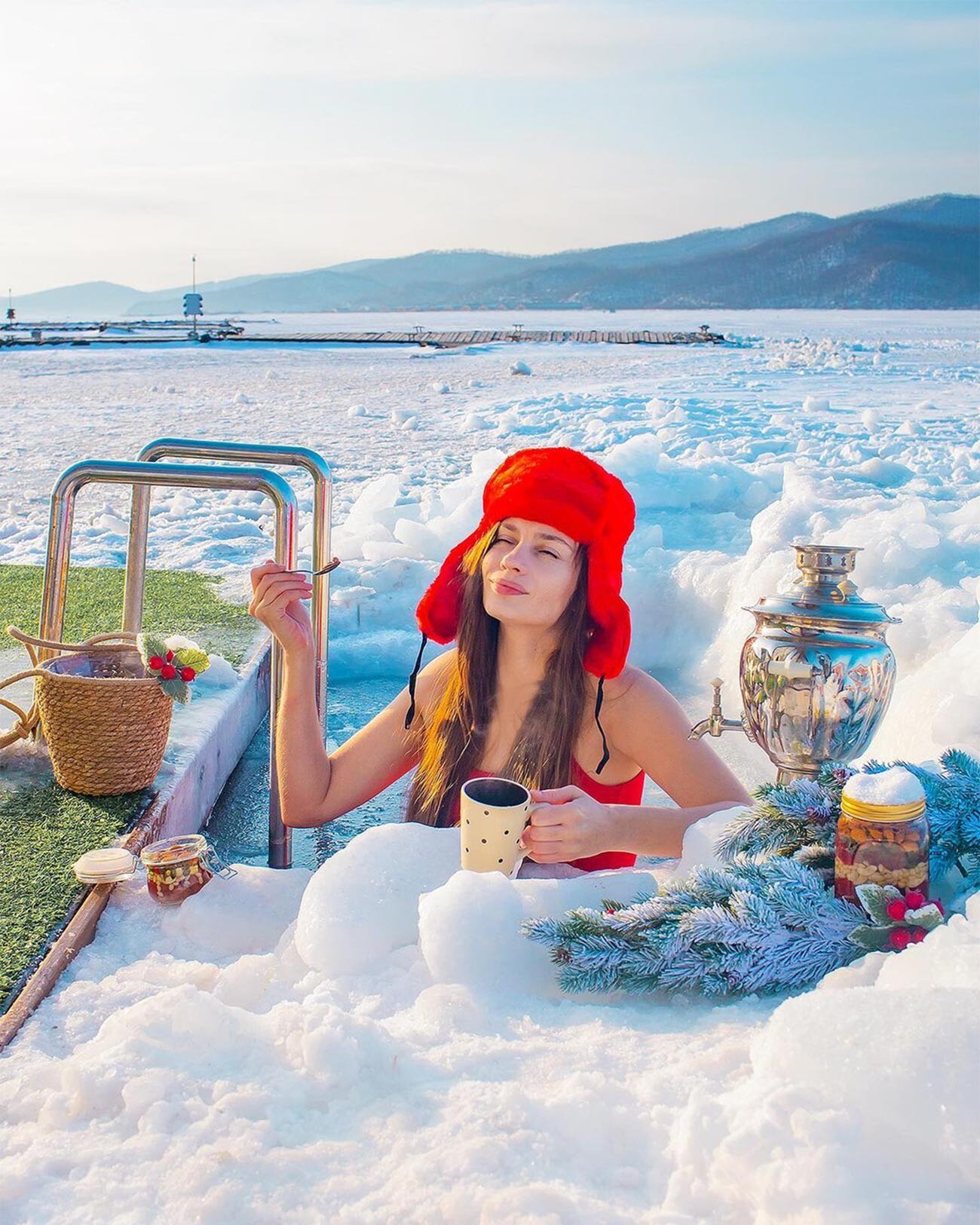 “Let's be honest, my winter videos are popular because they're controversial. TikTok often bans such things, describing them as dangerous. And I get so many views and subscribers largely thanks to the haters. They often message me saying I’ll never have children, don’t have a brain, will get cystitis. But such people know nothing about ‘walruses’ [winter swimmers] and will never understand it,” she says. 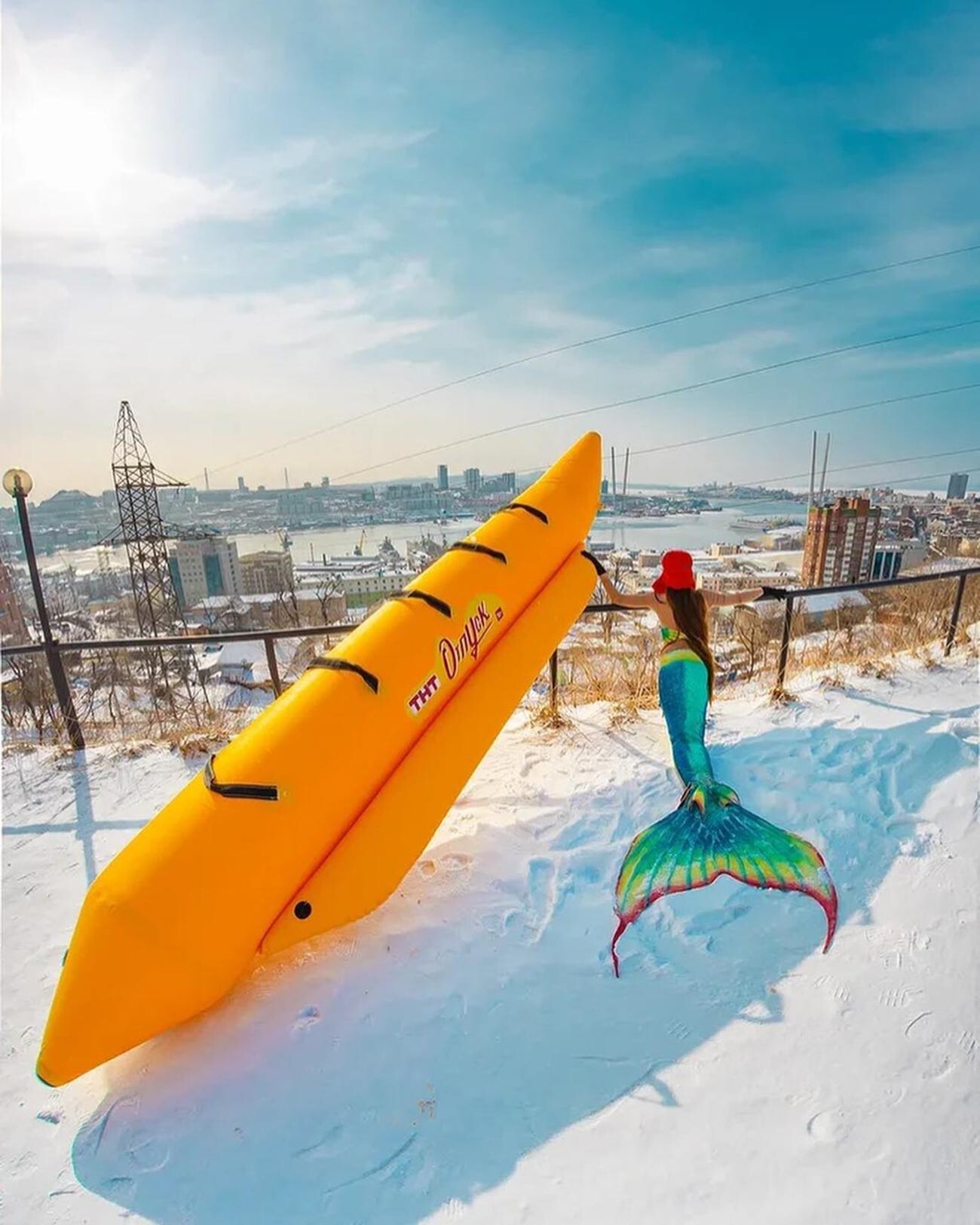 In actual fact, Anastasia is careful not to stay in the water for longer than two minutes, usually coming out after one. On her Instagram page she promotes winter swimming, writing a lot about the health benefits. 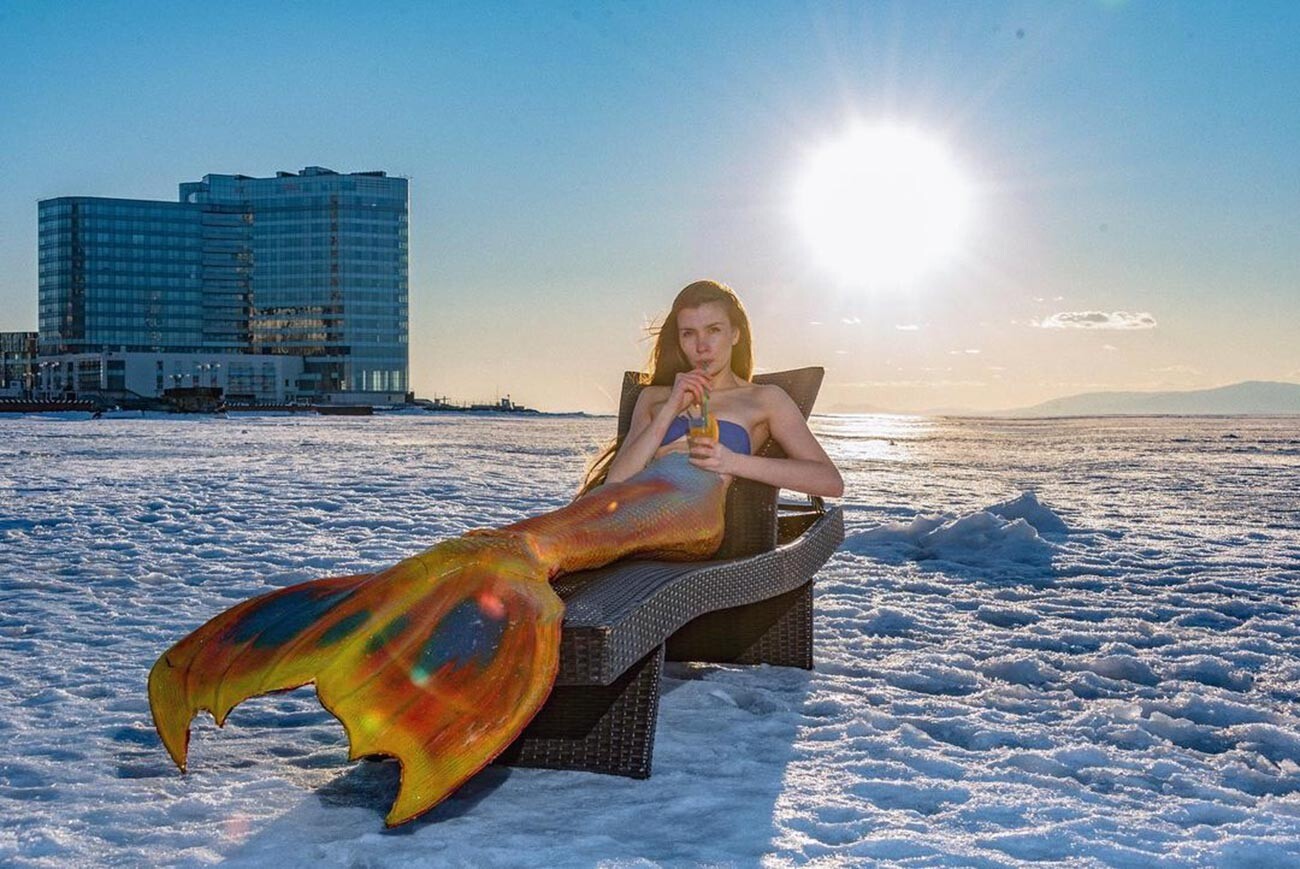 “It’s like this: when you’re in icy water, the body enters a stressful environment and activates its defense mechanisms: your body temperature rises to keep you warm. And when the temperature rises, it produces immunoglobulins – immunity proteins that destroy viruses, bacteria and fungi. If you do this regularly, your immunoglobulin level will be permanently high,” explains Anastasia, admitting that she used to catch cold from the slightest draft, but now can’t remember when she was last ill. 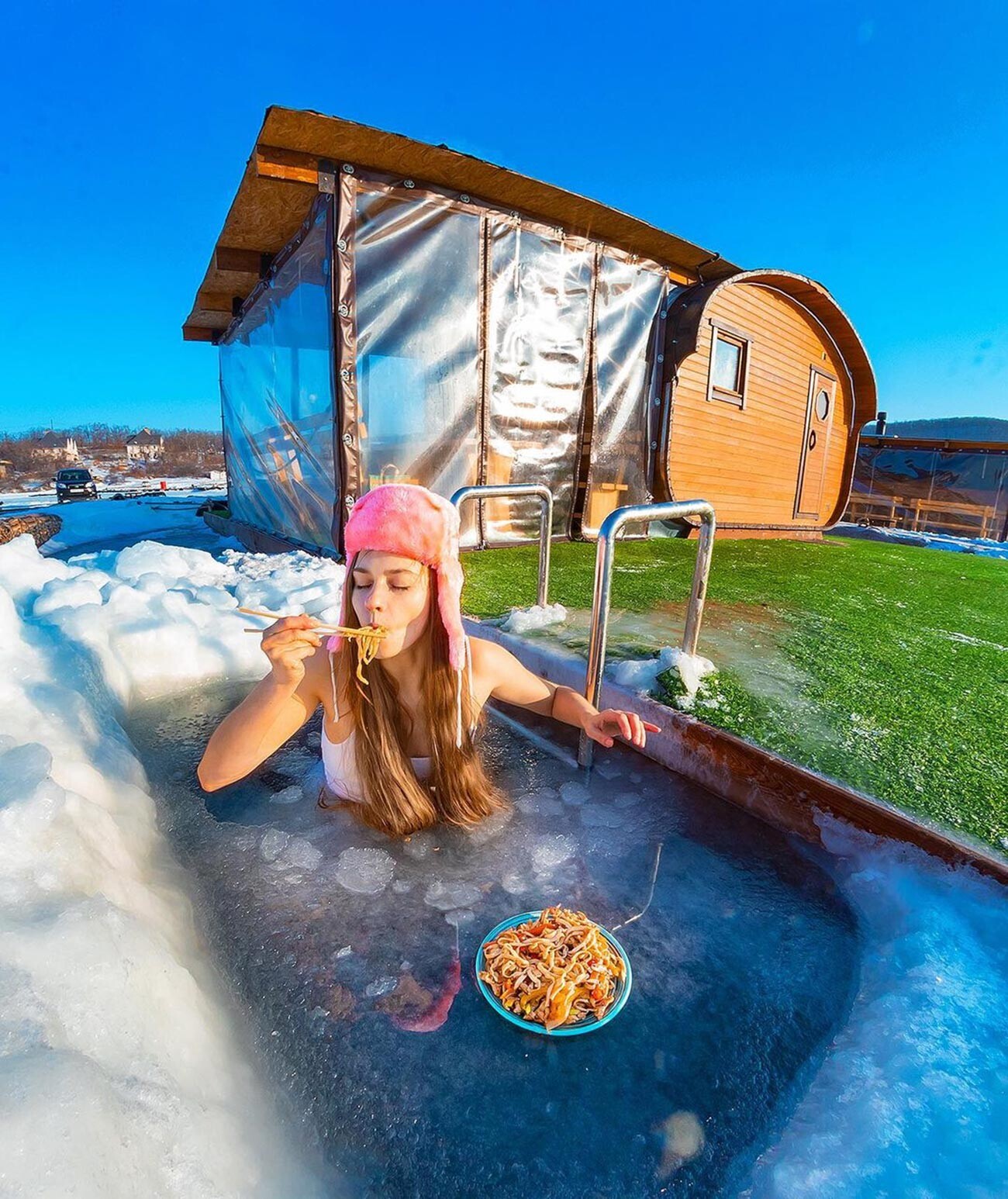 “I used to hate winter, I was cold and miserable, always falling sick. Now that’s all gone, I feel I’m living to the max,” she says.