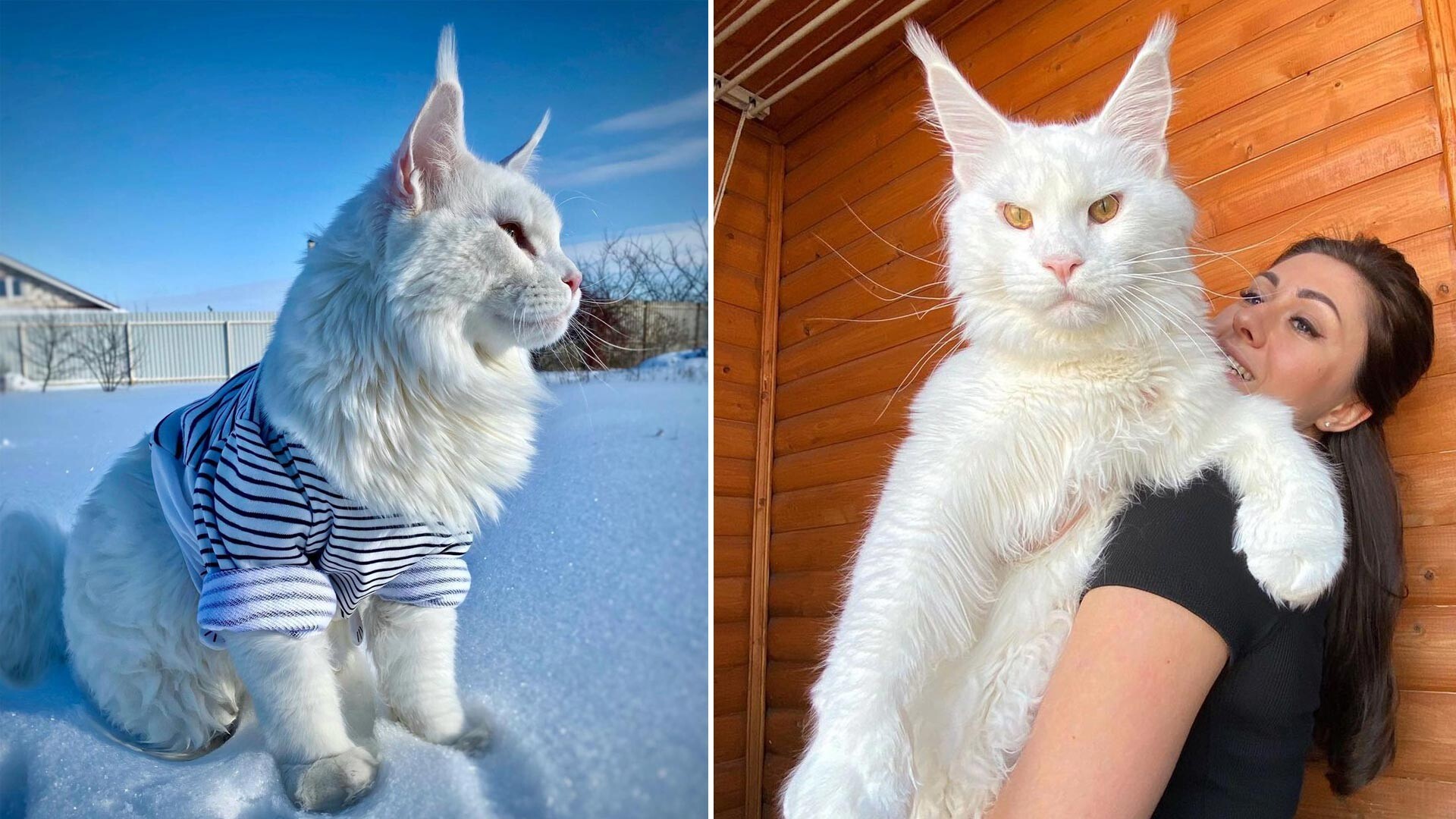 Instagram yuliyamnn
Imagine that a cute fluffy lump is lying on your chest… weighing 12.5 kg! Well, the owner of this cat does not need to imagine. This is her reality at home.

March 2020. Russia is in lockdown because of the coronavirus pandemic. Yulia Minina, 34, from Stary Oskol in Belgorod Region (495 km from Moscow) and a mother of two girls, decided with her husband and children to get a kitten to make their home life more fun.

“We never had cats at all before. We were just leafing through the ads of the nearest cattery and by chance saw a little white kitten. He was the only one in the litter at the time. I immediately fell in love,” Julia recalls.

When she went to pick up the cat, however, she was disappointed - he seemed prettier in the photo. 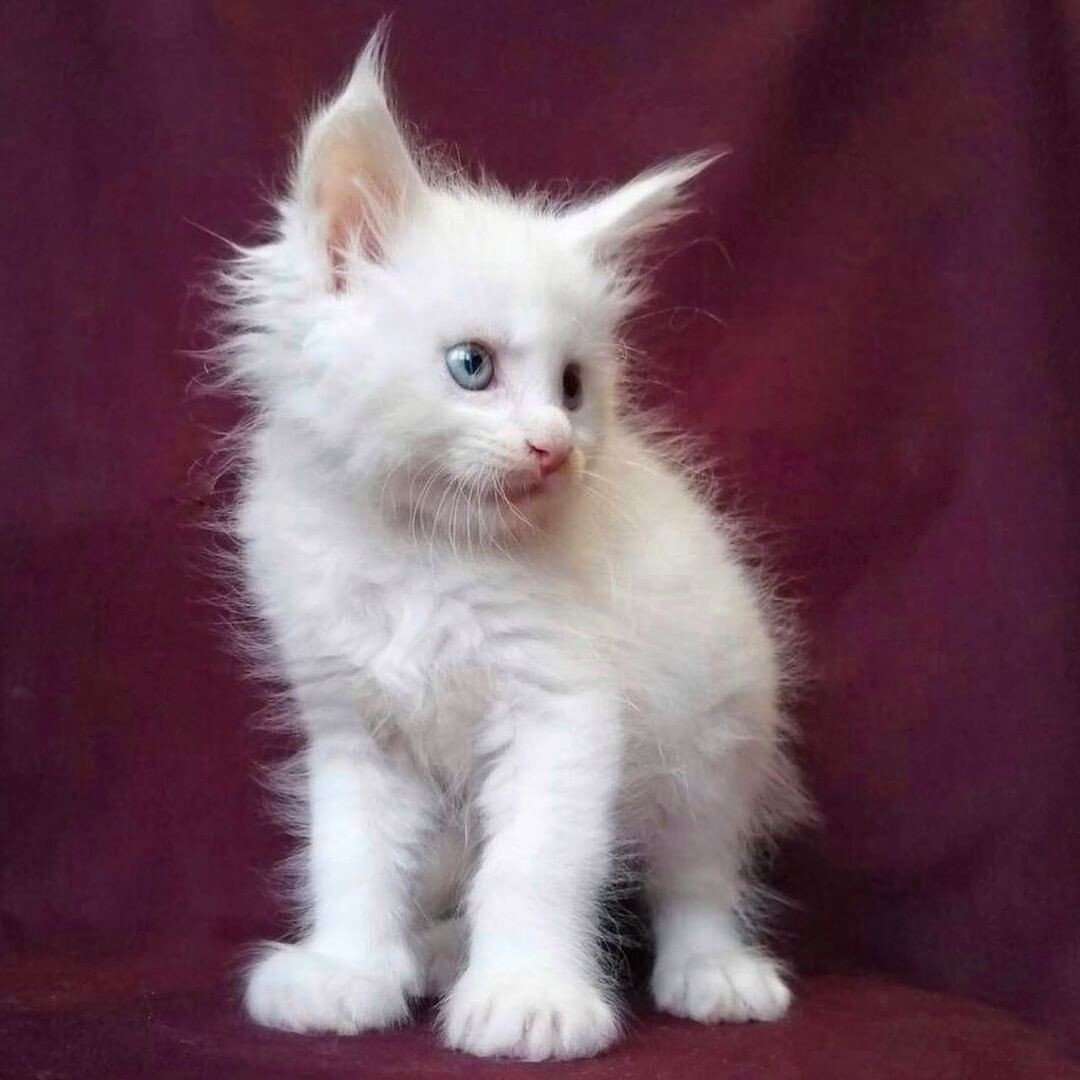 “No one thought that such an ugly duckling would grow into a white mountain of fur,” Minina reasoned.

Her two daughters chose the cat’s playful name, Kefir. Initially he was very skinny, but after four or five months, he was eating everything and was constantly playing with his owners and jumping on windowsills.

“Last year, we moved into a spacious house; before that, we lived in a two-bedroom apartment, but he, like a real parkour boy, didn’t have much room there either. Flower pots were often flying off the windowsills. But now there’s enough room to stretch out,” recalls Minina. 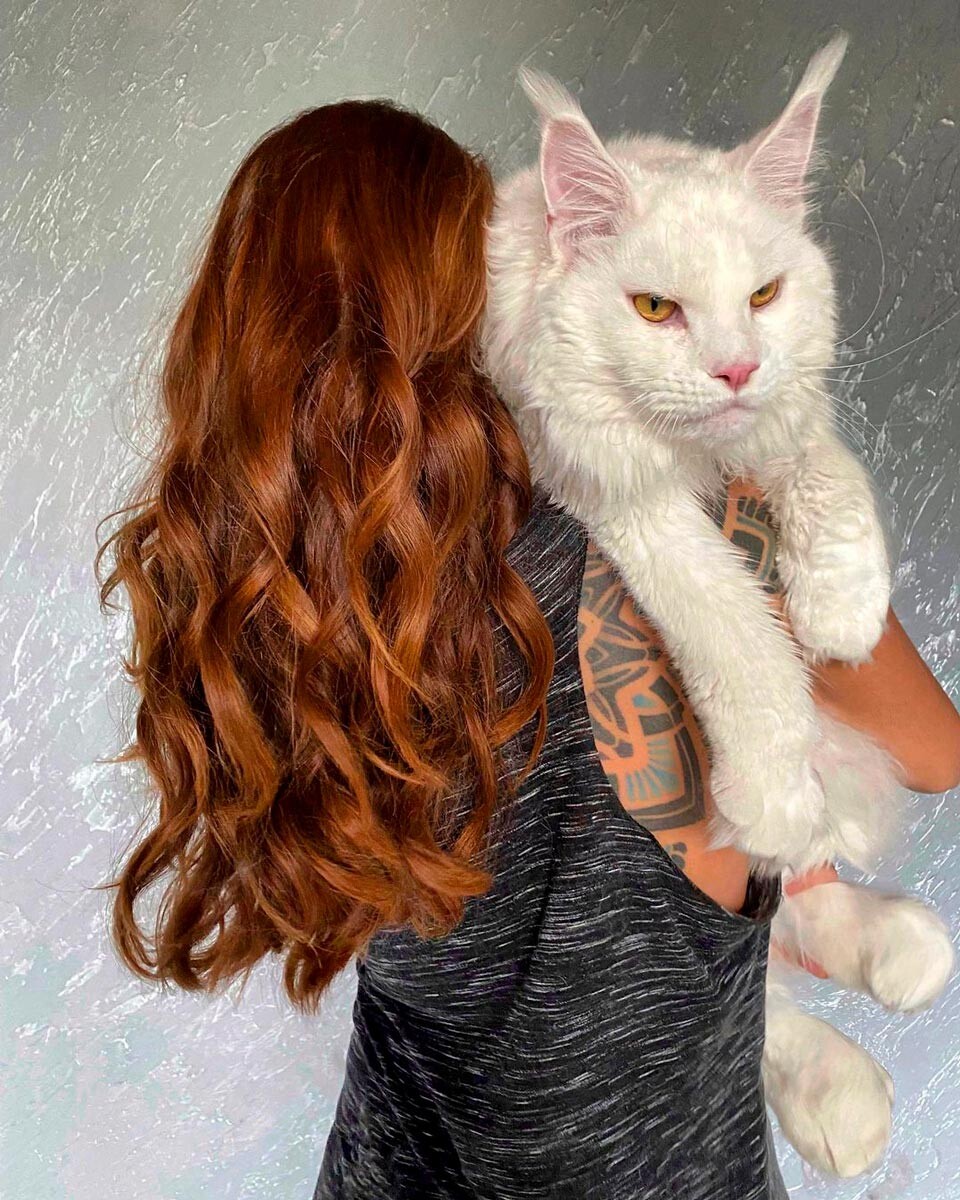 After nine months, the tassels on his ears and tail had doubled and, by the end of his first year, Kefir had tripled in size. He is now one year and 10 months old and weighs 12.5 kg (27.5 lbs.).

“In terms of personality, he’s just like a person. He’s very smart. Even sits with us at the table when we eat dinner, he has his own chair, so he keeps us company,” says Minina about the cat’s demeanor.

“As far as habits: he likes to sleep on my chest. When he was a kitten - it was normal. But now, when he suddenly lays down on my chest at night… well, I have to chase him away,” explains the owner. 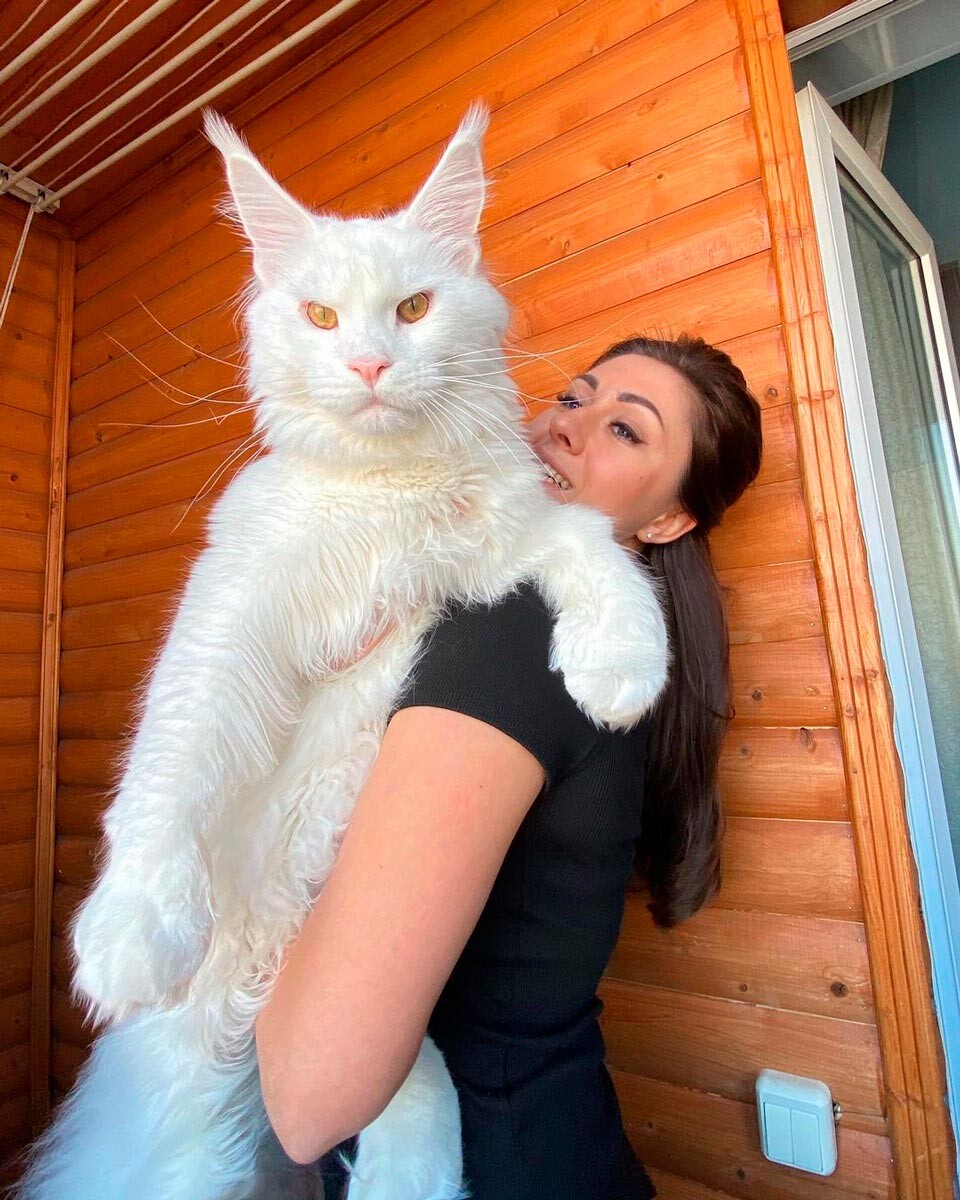 Julia does not understand the reason for her cat’s popularity. She photographed him twice for her Instagram profile and the photos quickly spread around on Russian and foreign media forums, including Reddit. The photo with Kefir garnered 18,000 likes and dozens of comments on Reddit. Some suggested that the cat’s owner was intentionally trying to make him look bigger with lenses and an optical illusion, while others speculated about his scowling face.

“Nah, that’s a Siberian Lynx. It feeds on the unworthy and drinks only vodka!” “And it does not look happy. Looks like he’s here for vodka and the unworthy and he’s all out of vodka,” some commenters wrote. 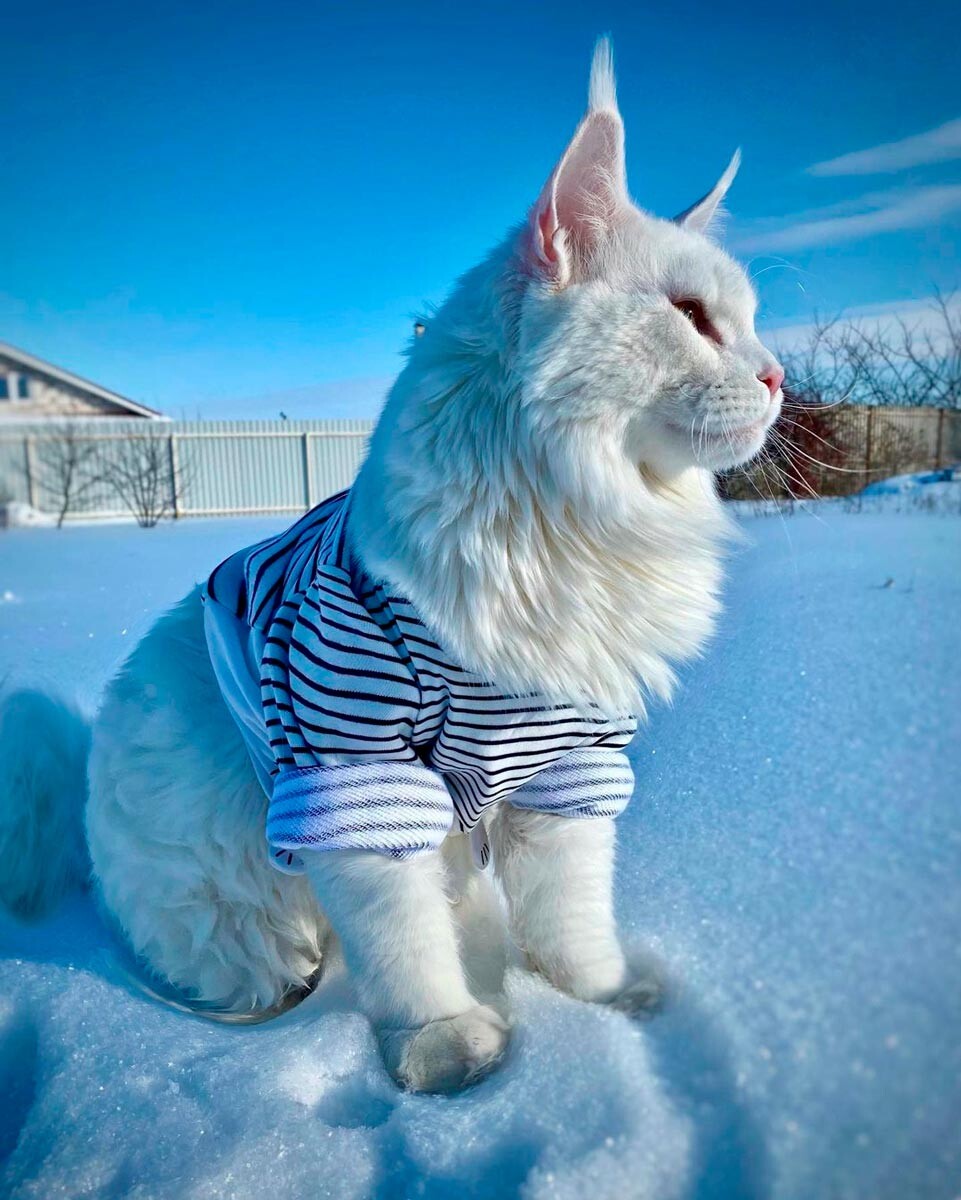 According to Yulia, most Russian and foreign fans don’t believe in Kefir’s existence and ask if it’s been photoshopped.

“Many people also want to buy Kefir, but that’s just awful. He’s a member of the family. No way will we give him up; we’ll only take pictures more often,” says Minina.