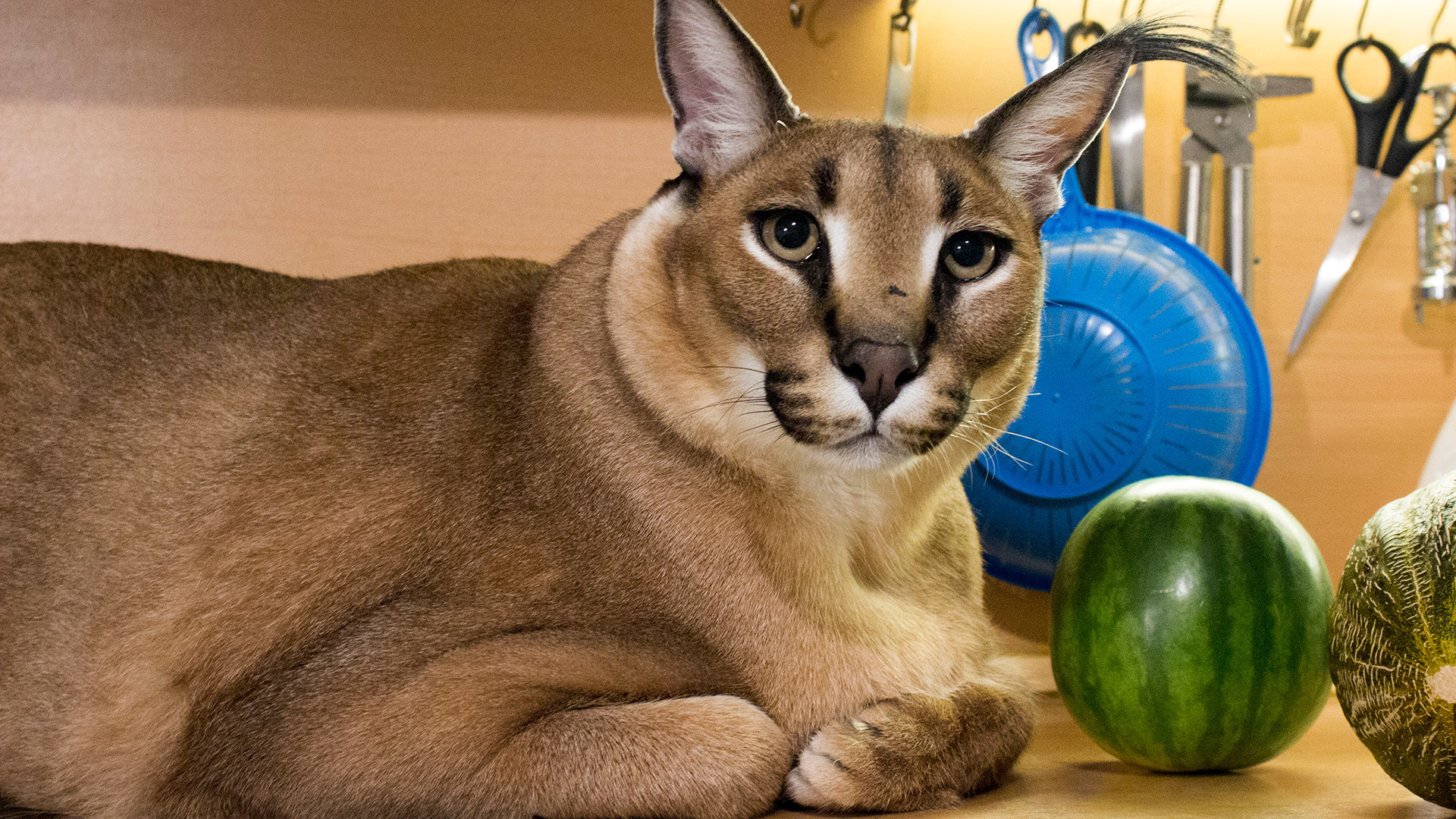 @prozhony
Green eyes, a large nose and big tufted ears - social media users have used a photo of a cat named ‘Big Floppa’ to create memes, doctored images, T-shirts, statuettes and even mobile phone apps. In actual fact, Floppa lives in Russia and he is not really a cat.

In April 2018, Andrei Bondarev, a videographer from Moscow, posted a photo of his “pet” enjoying his meal on his Instagram account - a giant short-haired cat with a large elongated nose, bright green eyes and enormously long tufted ears.

“To become a big cat, you have to eat a lot!” was the caption that launched the cat and his fellow cats, Matvei and Zhora, as bloggers. In 2020, the cat became popular on social media and websites, such as Reddit, under the name ‘Big Floppa’, or ‘Kot Shlyopa’. He got his nicknames from his ears.

In actual fact, his name is ‘Gosha’ and he is a caracal, a wild cat that looks similar to a lynx. Caracals are native to Africa, Asia and India, but Gosha was born on December 21, 2017, in a cattery specializing in wild cats in Ukraine. 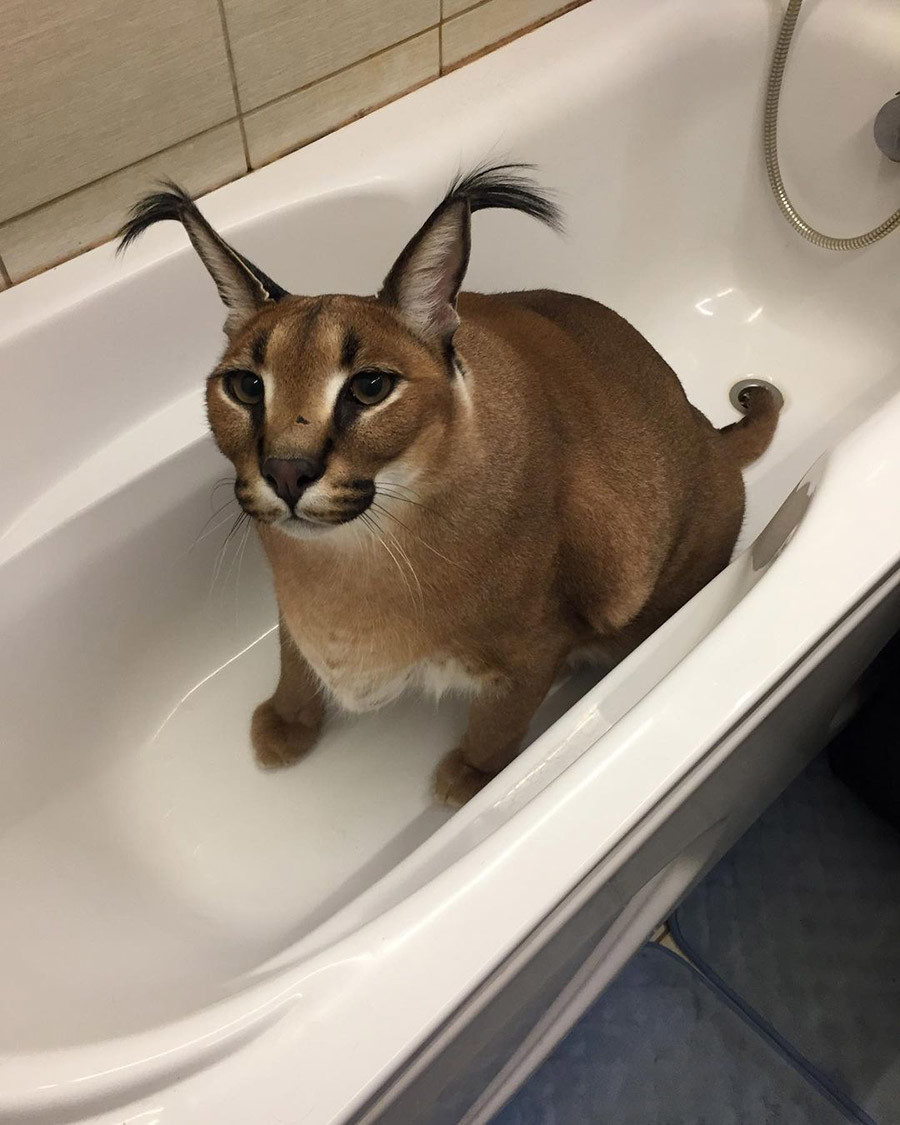 Several months later, in April 2018, he moved to Moscow after being adopted by the Bondarev family - Andrei and his wife Yelena.

“Lena [short for Yelena] saw this animal on the internet and showed it to me and so we decided to acquire a wild cat. Why not? At the beginning, the idea was not entirely serious and looked like a dream to be realized one fine day. But for a whole year, we were getting ready for it and consulted experts and got so used to the idea that we could not give it up,” is how Andrei recalls their decision to get a caracal. 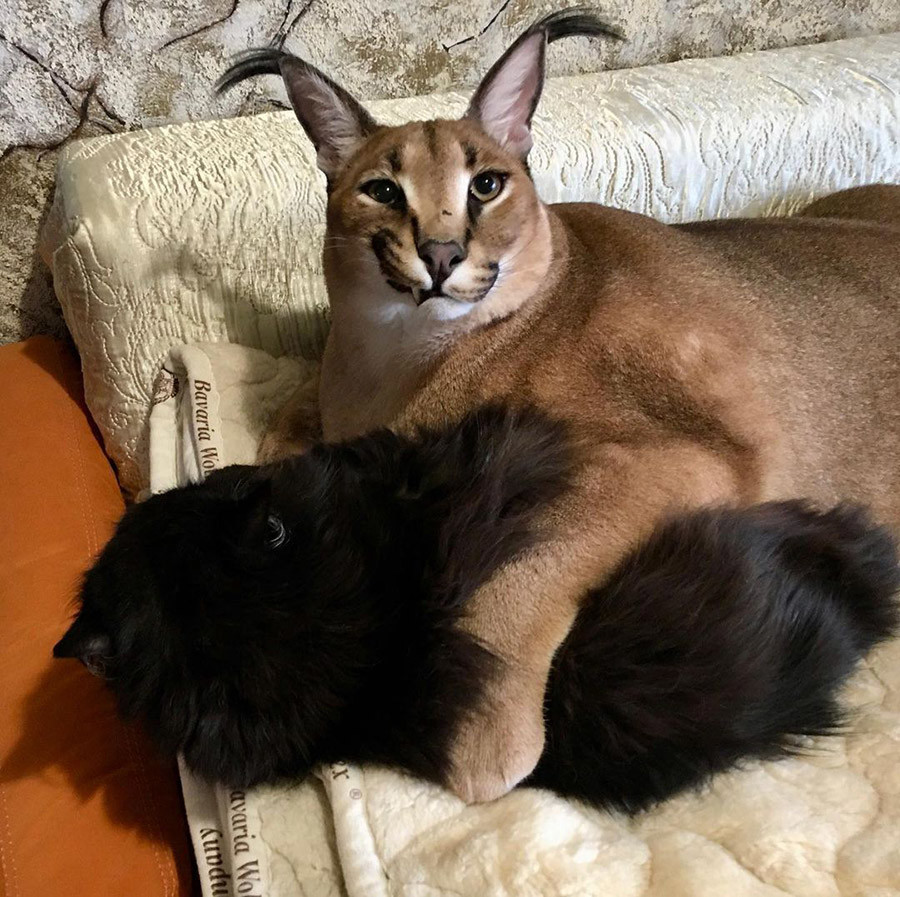 It took Georgy [full form of Gosha’s name] and his pet delivery couriers more than 24 hours in a minibus to get to Moscow. According to Yelena, for the first few days, he was afraid to walk  around the apartment; he hissed and hid, but didn’t refuse food. Gosha was “mentored” by Matvei - another cat the Bondarevs took in from an animal shelter, who is already over 12 years old.

“Zhora [cat number three, 4½ years old] was very offended at us for taking in someone else, and, for the first couple of weeks, he ignored Gosha and us. Now he is best of friends with Gosha,” Yelena said.

From an early age, Gosha chased toys and ran around with the other cats. The only difficulty was training Gosha to use the litter box; but, according to Yelena, these are “routine feline issues”. 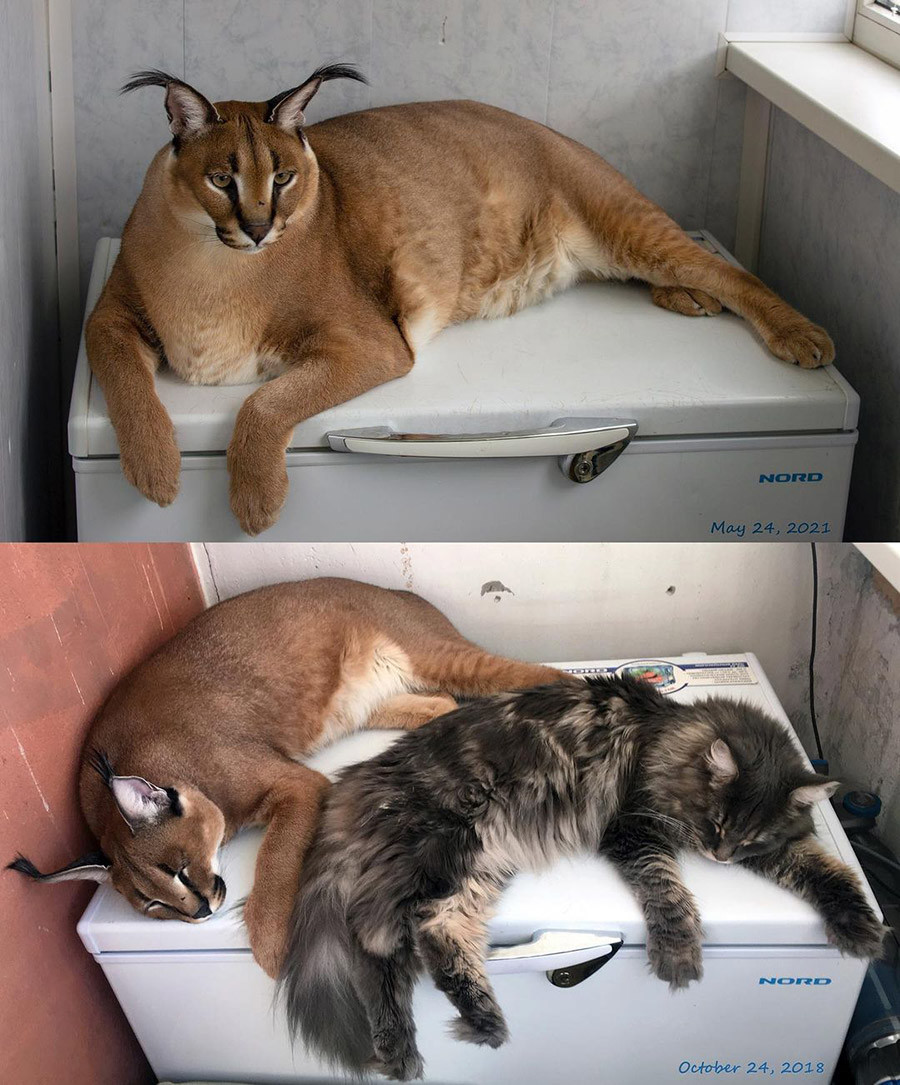 Gosha only gets healthy food in his diet - turkey, rabbit, offal, day-old chicks and vitamin supplements.

“Gosha is dominating and regards me as exclusively his human being and no-one else’s. He has quite a canine nature, he is very devoted and doesn’t like to be on his own. He is very cautious with people he doesn’t know,” Yelena says, describing the caracal’s character. 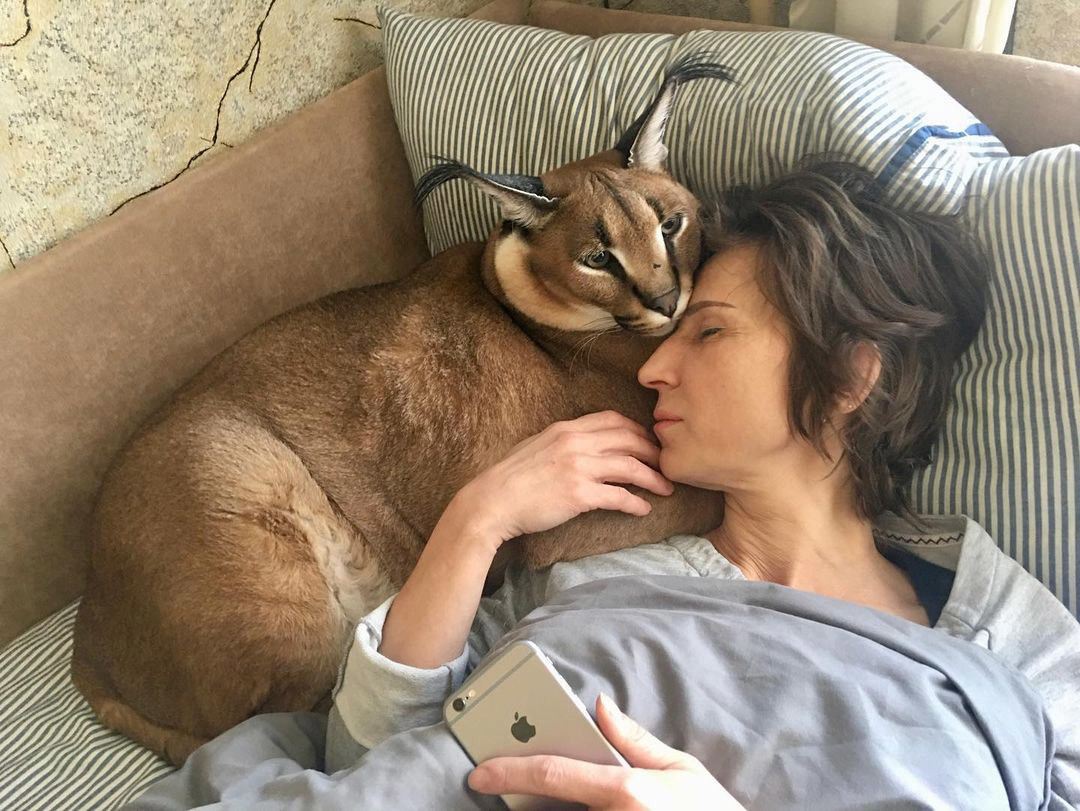 Andrei says that Georgy’s behavior is often on the rough side - when he’s got nothing else to do, he shreds pieces of cardboard that Andrei and Yelena buy for him specially, but that does not prevent him from ruining the wallpaper and furniture as well. 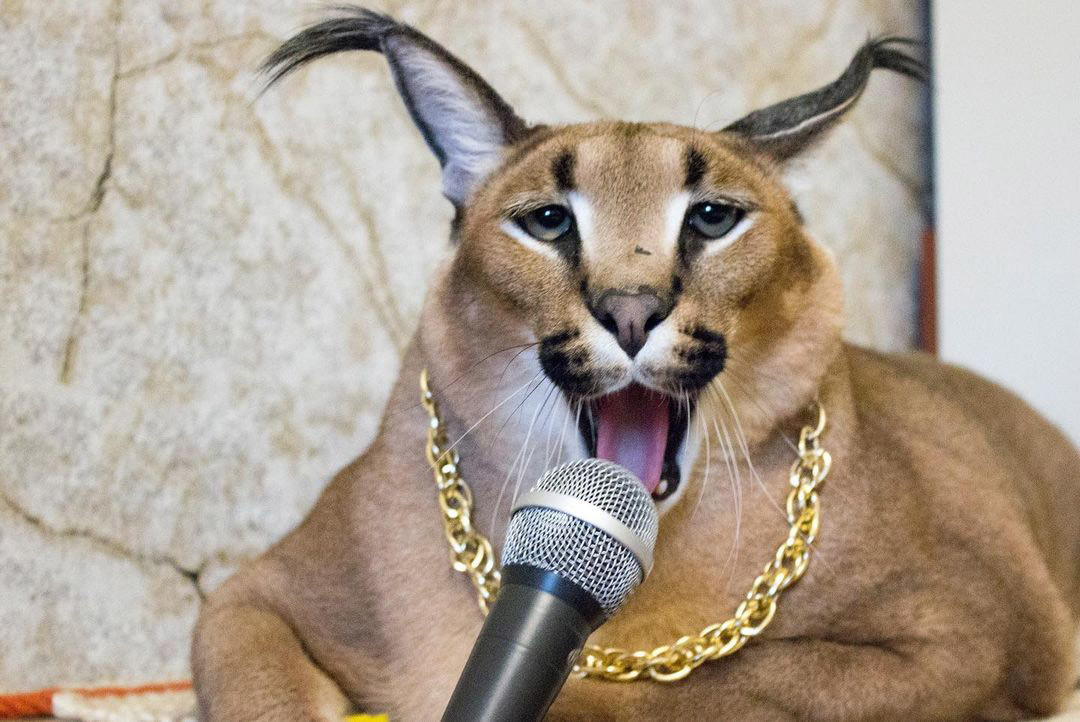 “In places, he’s scratched the walls right through to the concrete. During the first year, I used to repair the plaster and patch up the wallpaper, but then I gave up. And the TV is scratched - Gosha jumped on it when he saw some birds on Animal Planet,” Andrei says.

Gosha became popular on the internet in early 2020 thanks to a photo, in which he is lying on a windowsill with Zhora. 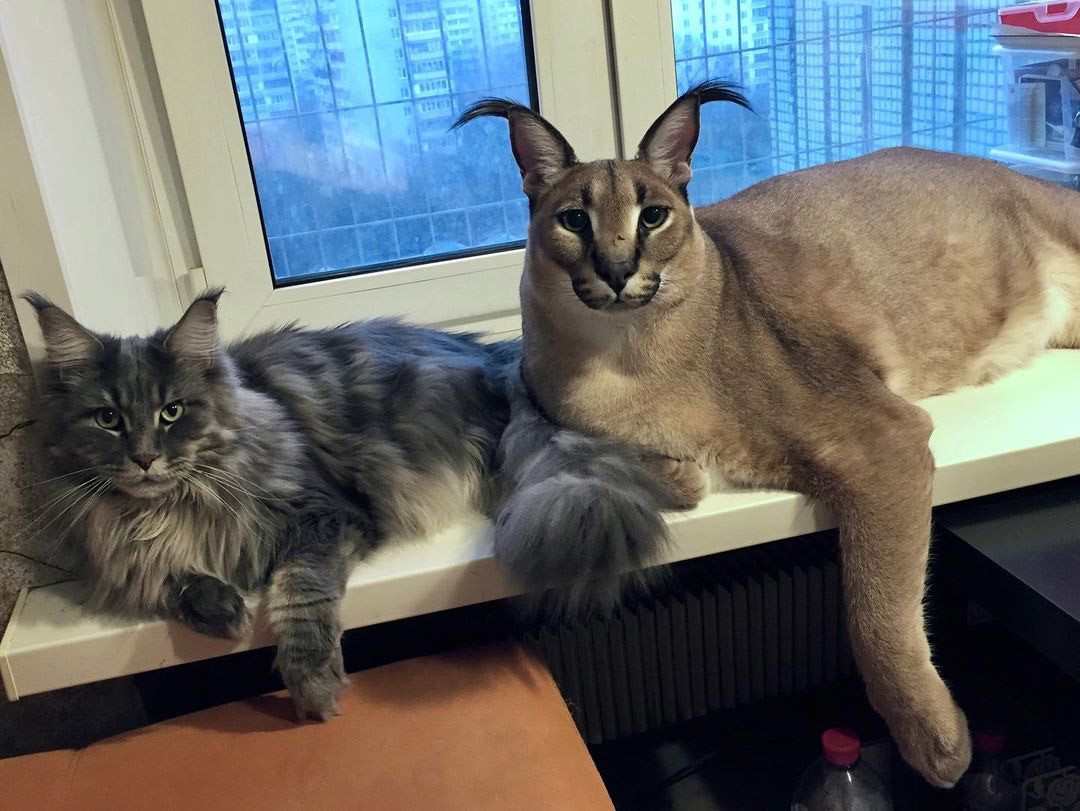 This photo launched a string of demotivational posters, memes and doctored photographs - at first, the photos were circulated in meme communities on Instagram and then they spread to Twitter and Reddit.

“One of my husband’s internet friends who also owns a caracal told us about Gosha’s popularity on the internet. We thought, “Wow, that’s neat!” and continued to post pics of him. Only I really don’t like it when Gosha is used for memes on controversial “topical” political subjects, or memes exhibiting Nazism, racism, homophobia or other offensive content, it’s terrible,” Yelena said. 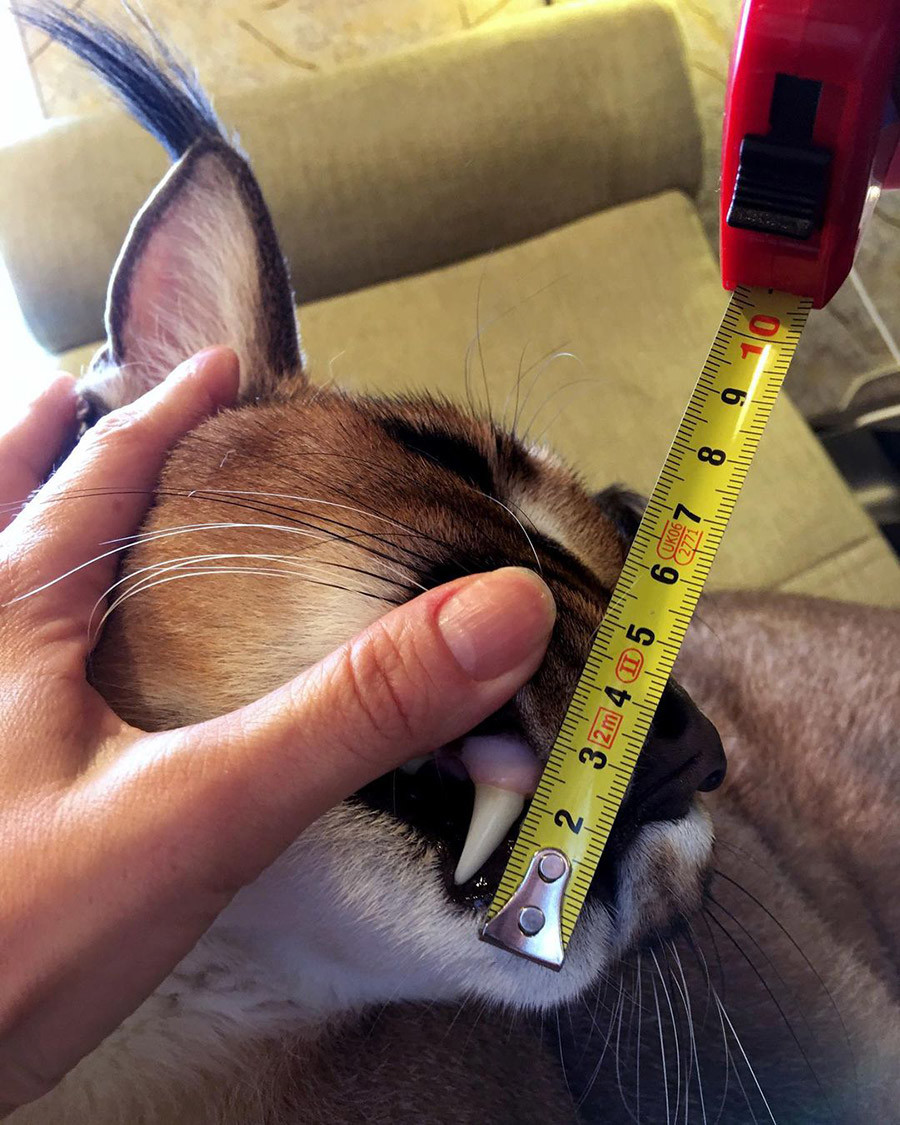 In 2020, supporters of Gosha asked the Bondarev family for permission to use images of him for merchandise and mugs, figurines and even Big Floppa cubes went on sale.

Also in spring 2021, an app devoted to Big Floppa appeared on the Google Play App Store. The game consists of a photo of Gosha [known as Gregory in English], who changes position when you click on him. So far the game has received exclusively positive feedback. 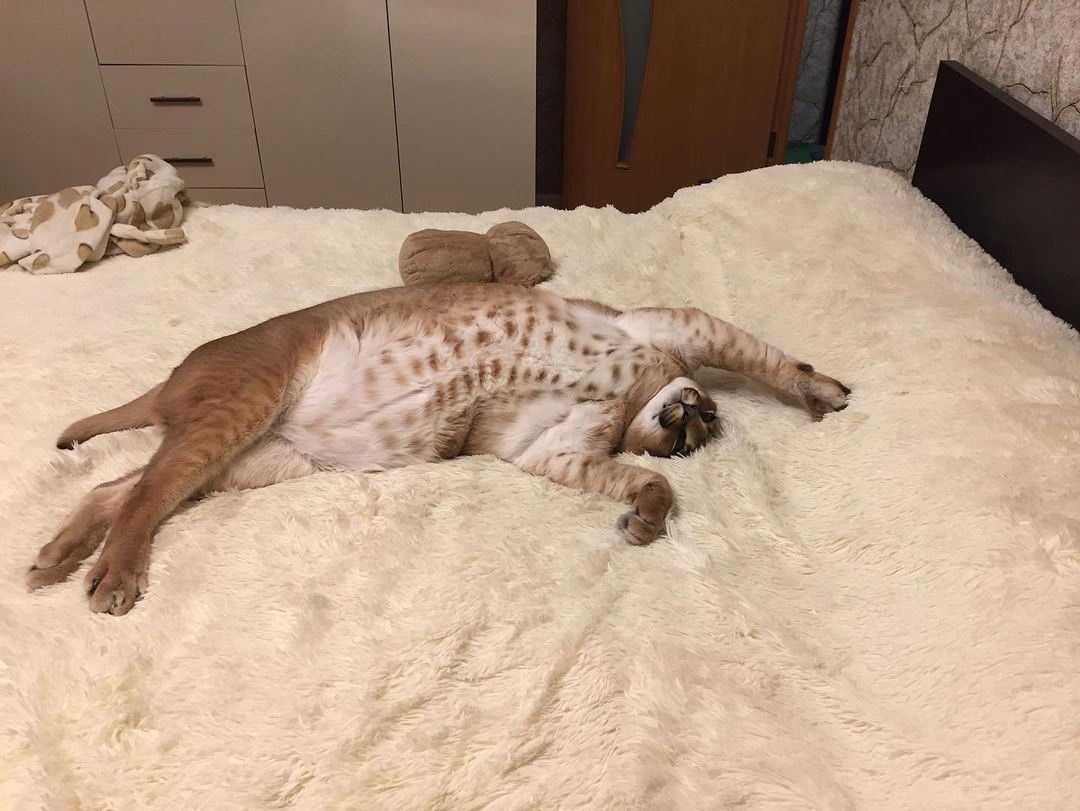 “It’s a cool game, the content is very interesting and there are even a few screamers. When I clicked on Shlyopa (Floppa) he growled so much and gave me such a fright. All in all, there is everything here and you don’t even have to add anything extra,” writes a user in comments about the game.

“To show their gratitude, some supporters send us donations, a proportion of which goes towards helping the other cats. But the donations are not enough for Gosha’s upkeep, which costs 20-25,000 rubles ($270-$340) a month and that only covers food and the filler for his litter box,” Yelena says. 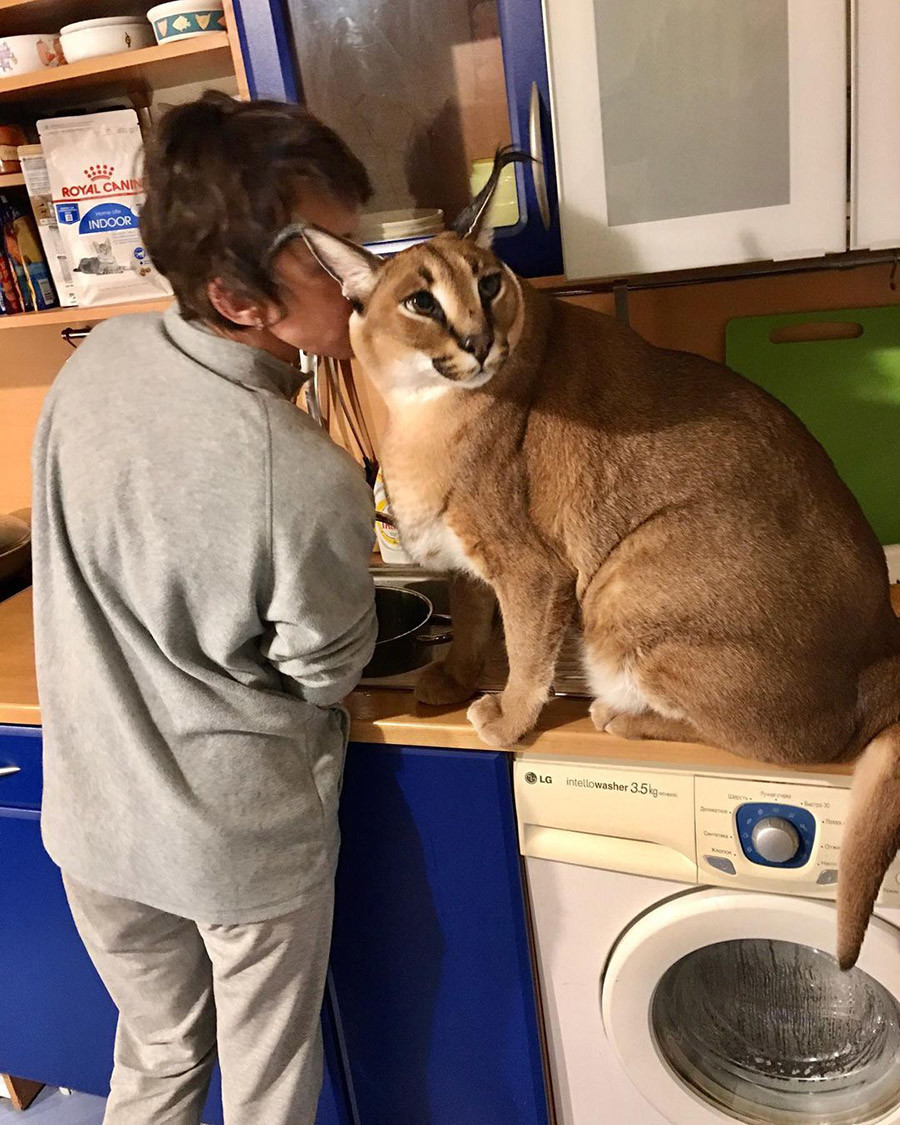 In addition, a wild cat specialist examines and vaccinates Gosha twice a year. Apart from that, according to the Bondarev family, he is no different from any ordinary cat.

“The only difference is his size, so you have to take more care and pay attention more. Accidental injuries you get when, for instance, playing with him are much more serious than from small cats. Of course, the degree of ‘destruction’ of the house also grows in proportion to the size of the cat. As for the rest - a cat is a cat in Africa, too,” Yelena says in conclusion. 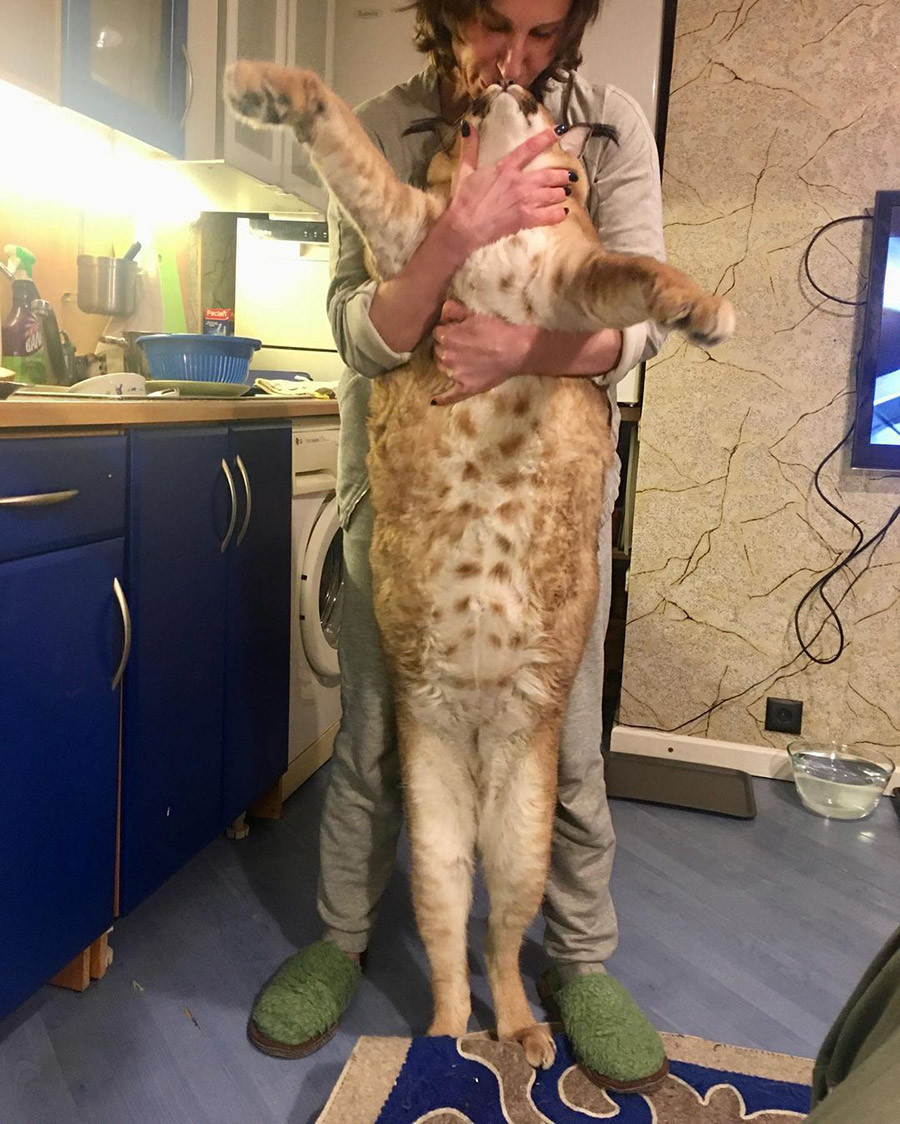