Why do young Russians choose to live in apartments like monastic cells? 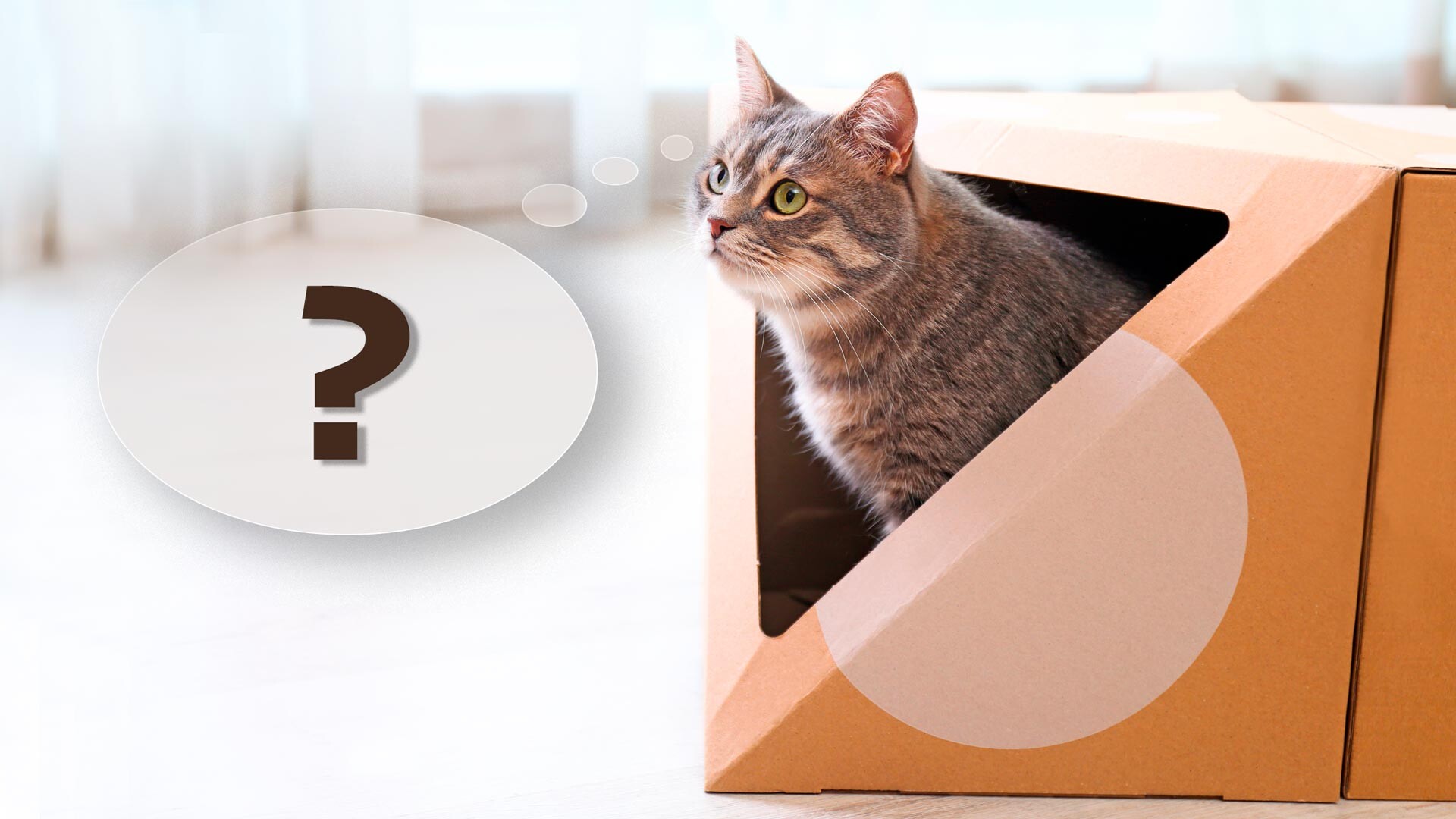 Russia Beyond (Legion Media)
Can six people fit into a tiny studio apartment? Well yes, it turns out they can, but be careful because the cat could become depressed.

People in Russia are all too familiar with housing shortages. In the Soviet Union, it was not uncommon for entire families to live in one room of a communal apartment. Other people had a room or just a bed in a hostel. There were also so-called hotel-type apartments that ranged in size from 12 to 25 sq. m. It seemed that the construction boom in post-Soviet Russia would finally put an end to people being forced to live in cramped conditions, but unfortunately it was not so simple. In recent years, highly presentable buildings with entire apartments once again measuring between 11 and 25 sq. m. have been in high demand in Russia’s big cities. Who wants them and why? 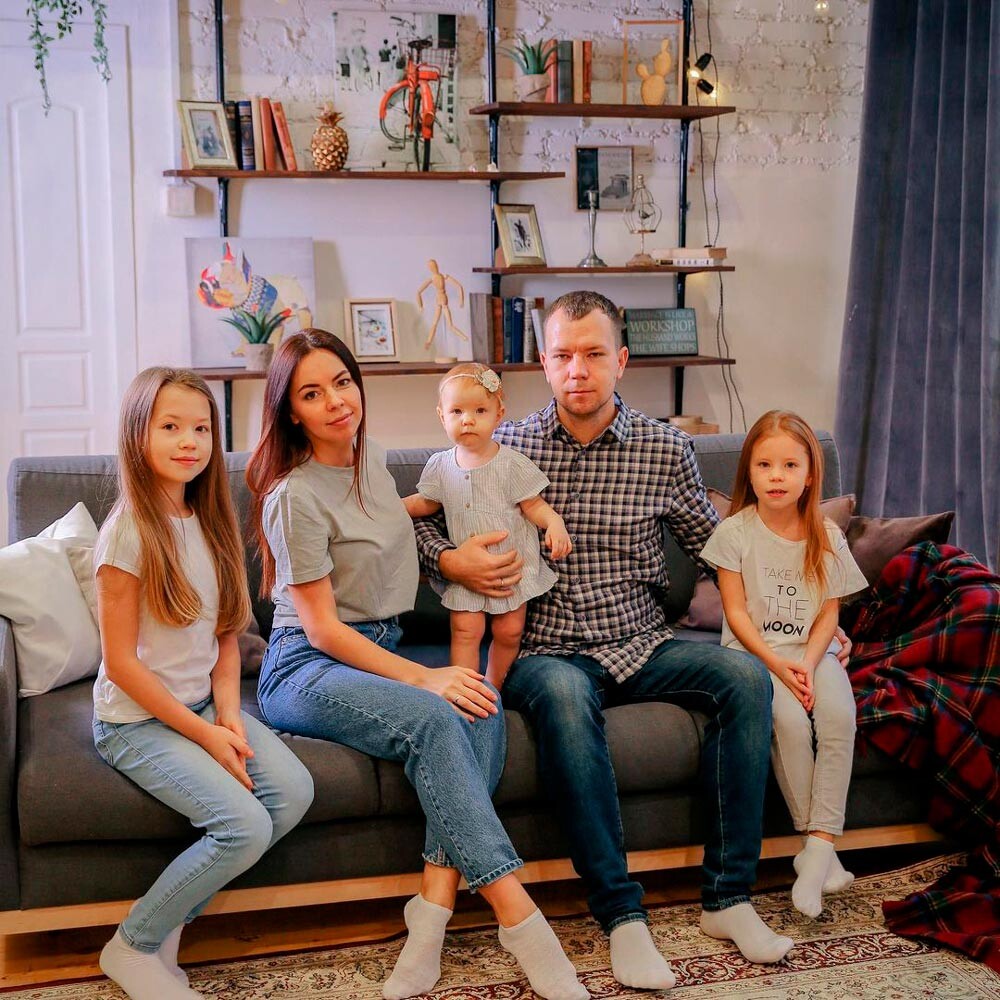 A mother, father and their four daughters live in a space measuring just 22 sq. m.

"We never thought we would live like this, but we wanted to move to Moscow and didn't have enough money to buy a normal apartment. So we decided to get something that was small but ours," says the mother, Yuliya.

The question was how to fit the whole family into such a small area. They put two large sofa beds and a cot in the room and then found space for a desk where the children could do their homework. In the narrow corridor, there is a cupboard, a small fridge and a compact kitchen. This is where they store all the family’s possessions, and even then the shelves are half empty.

"I'm a minimalist, and that is what saves us," says Yuliya. "We buy as few things as possible and also save money this way."

They keep items they need seasonally in their home village and unceremoniously threw the rest away.

Yuliya runs a popular blog about how six people can live in a studio flat, giving advice on how to optimize living space. "For example, I try to store all the clothes vertically in a chest of drawers to make it more compact. Children's toys are stored in boxes under the sofa. And we regularly declutter!"

The family has already acquired a bigger apartment but is still living in the studio flat while their new apartment is being renovated. Down the road, they plan to rent out the studio. 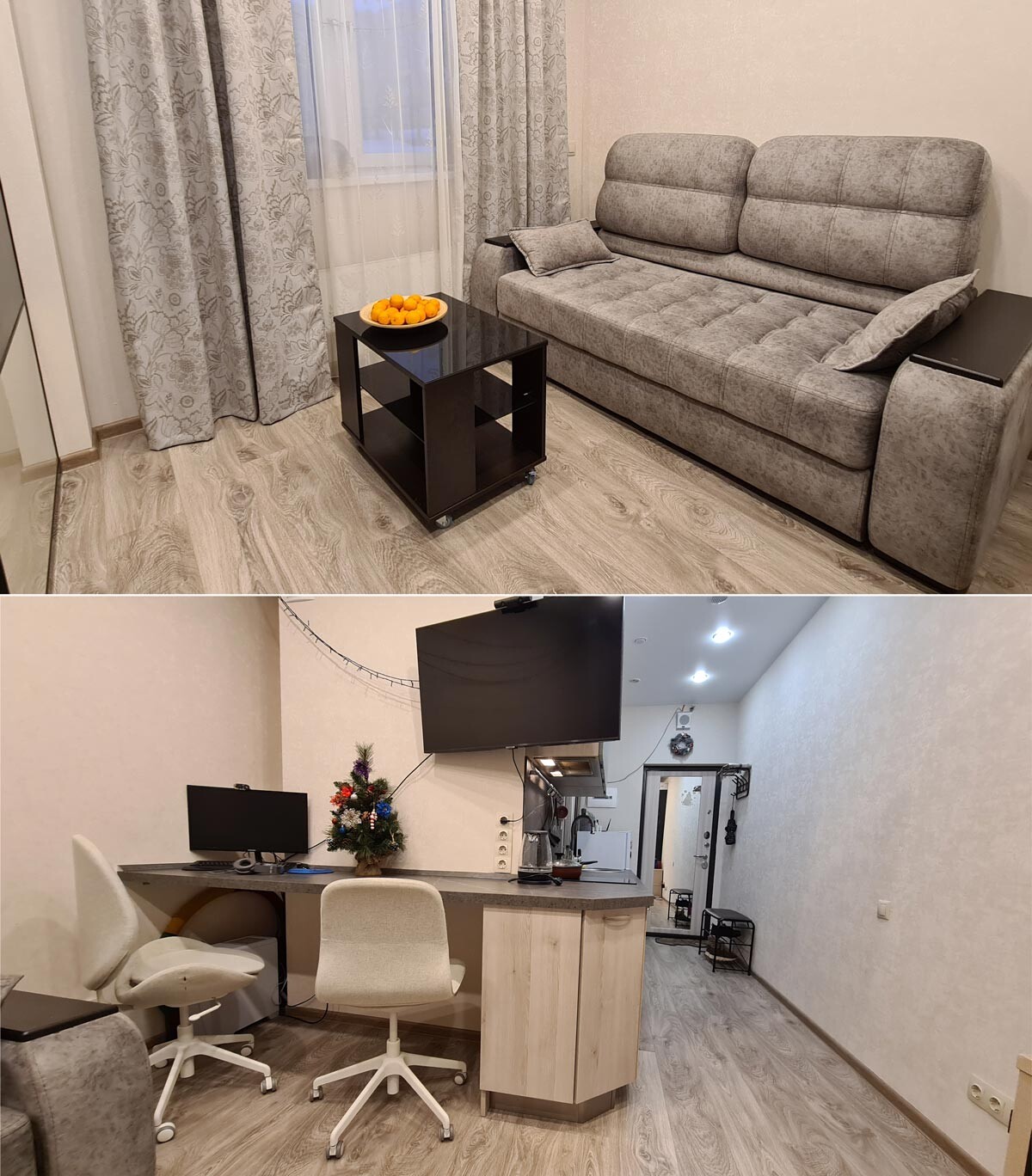 Svetlana, her husband and their cat live in a 20 sq. m. studio flat in the Moscow Region.

"Before, we lived in rented apartments, saving money for a mortgage, and didn't plan to buy a studio flat,” Svetlana says. “But one day we saw a poster with a studio flat for sale in a house being built outside Moscow for just 1.5 million rubles ($20,000) and thought: Why don't we buy it as an investment since everything is getting more expensive? In the end, we bought 20 square meters without a loan and even had enough money left over for the renovation. We've been here for almost a year."

A lot of things had to be thrown away or taken to the dacha. They store their bicycles in the building's entryway. In order to make space for the furniture they needed, they gave up the stove and oven: In their place, they installed a small hob and an electric roaster. Their conventional vacuum cleaner was replaced with a vertical one that takes up less space, and instead of a large model they had to make do with a compact one.

"We have a single counter top in the kitchen that goes around the corner, where we have our working area," says Svetlana. 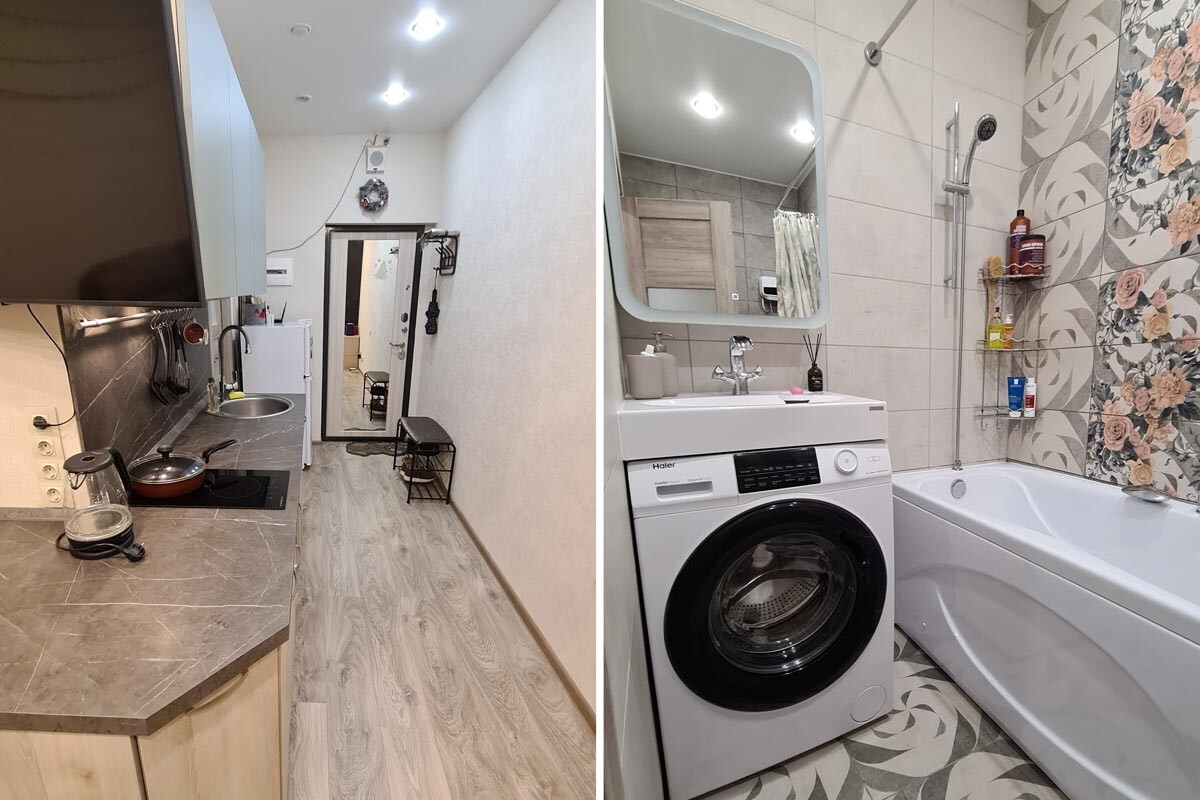 She works from home and having enough space for a computer is very important to her. The dinner table is also unusual here and has wheels so it can be moved around to free up the limited space when needed.

"We were also thinking of putting the TV in the cupboard but in the end found a place for it in the corner."

Additionally, the air in the studio flat was very dry and rather stuffy. The issue was solved with the help of a humidifier and an air conditioner.

Still, after a few months the limited space began to have an impact. It turned out that both partners needed their personal space to have both work and personal conversations with friends without disturbing each other.

"Even our cat became a bit depressed since it doesn't have enough space for roaming around here."

The pair is now planning to move to a bigger apartment.

20 meters and a storage space

Nataliya also lives with her husband in a 20 sq. m. apartment and runs a blog on life in a studio flat. They have been here less than a year.

"I'm from Moscow and my husband is from another town, and he said he wanted to have a place of his own. We couldn't afford a mortgage, so we scraped together the money for a studio, paying by installments," Nataliya says. "But we like the studio a lot, although some people think it's complete madness. I sometimes get comments like: 'Personal space has left the chat.'"

The young couple don't have such problems themselves though.

"Even before, we used to spend our whole time on a sofa in the kitchen together, and we only went into the bedroom to sleep."

Nataliya works at the breakfast bar and her husband on the sofa, and neither gets in the other's way.

"If I quarrel with my husband, we don't retreat into different corners. Quite the reverse: We deal with the problem straight away."

The pair have found an interesting solution to the problem of sleeping space: a wide sofa with a headboard like a bed. And they've rented a basement storage area for their things. They keep their skis, skates, scooters and seasonal clothes there.

"At home we only have the clothes we wear. When I buy something new, I throw away or donate my old things."

They recently acquired another studio flat—a 17 sq. m. apartment in central Moscow. They say they couldn't resist the attractive price and decided to buy it as a rental investment. For the time being, they are renovating it and considering whether to live there for a while themselves. In any case, they now know that they can fit into such a tiny space.

An experiment with 13 meters 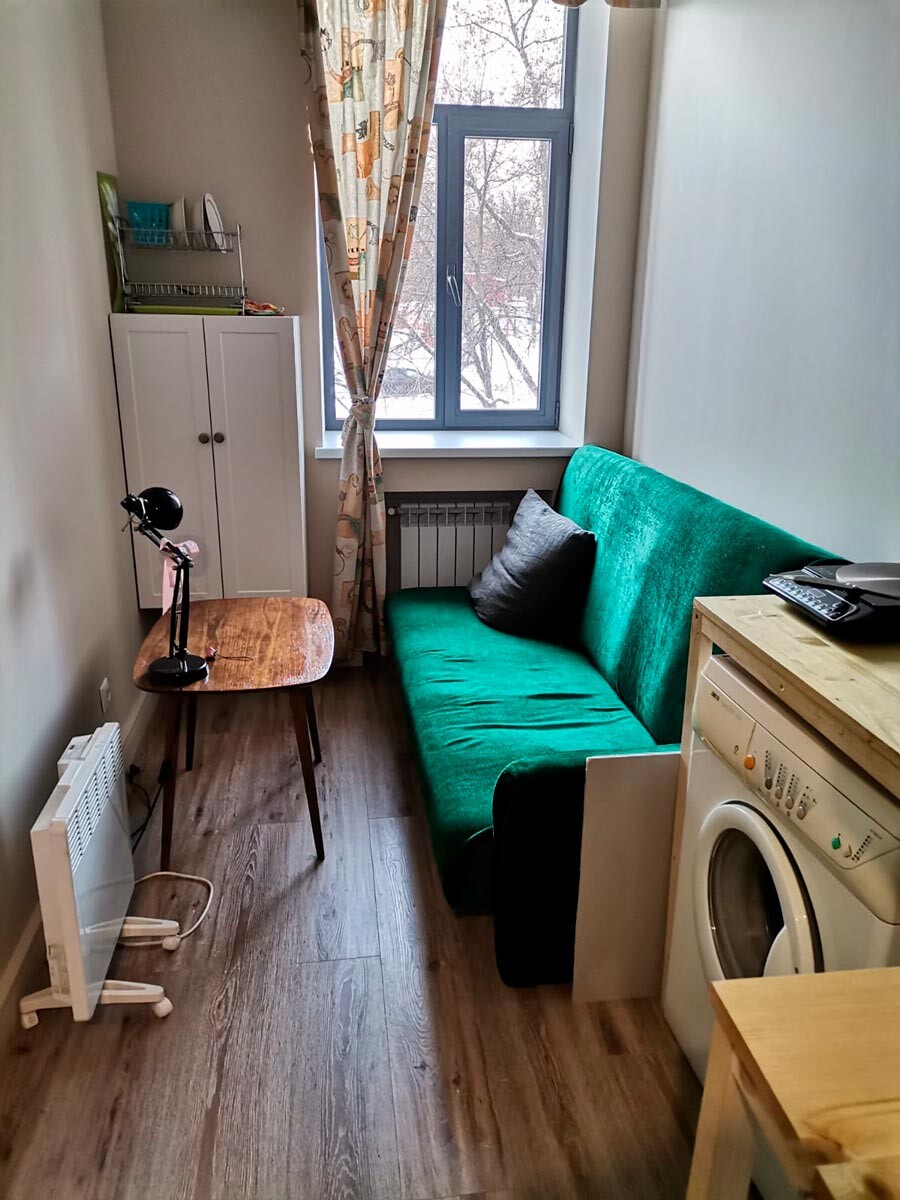 Valentina spent two months living in a Moscow apartment with a floor area of just 13 sq. m. and regards this experience as a living experiment.

"It was like being in a tent for two months, and anyway I like to wrench myself out of my usual routine—it's good for me," she laughs. But she goes on to emphasize that this was just temporary accommodation while she was looking for a more suitable apartment.

She notes that a major plus was the high ceilings and well-planned use of the space.

"This was the layout: window, sofa, kitchen table with a hob and sink, and under it a washing machine, fridge and microwave, and then a narrow corridor with a shower and toilet."

Looking at the photos, you don't get the feeling it was just 13 meters! To let in some fresh air, you could open the door and the window at the same time. When Valentina was at home, she did not cook and only used the microwave and kettle.

"It was very comfy for a single person, but I was very surprised that a similar flat upstairs was occupied by a whole family with children," she says.

Valentina now lives in a large apartment and says she sometimes feels like the lady of the manor.

"When I was living in the microstudio I couldn't see myself in my clothes because there was no full-size mirror, while now I have a lot of mirrors. I can't stop looking at myself!"