This GIANT apartment complex houses 20,000 people! How on earth do they live there?! (PHOTOS) 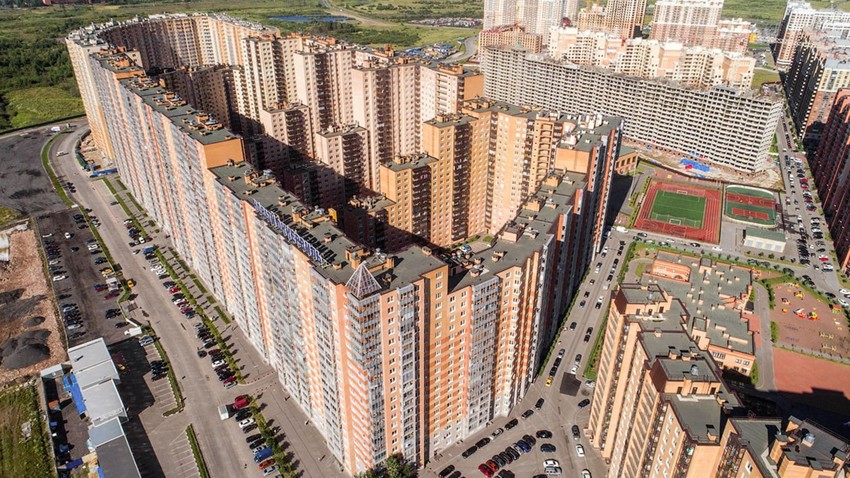 Ilya Varlamov (CC BY-SA 4.0)
This apartment building near St. Petersburg shocks with its enormous size. We asked its residents what it’s like to live in such a place.

“Imagine all the unique Wi-Fi names that could pop up at once!”

“A zombie apocalypse here would be intense!”

“Tinder must be poppin’ in that 1 mile radius!”

All these jokes are dedicated to a building in ‘Novy Okkervil’ apartment complex - the largest single apartment building in Leningrad Region, situated in the town of Kudrovo, just outside St. Petersburg. According to information from the contractor, the building has a capacity of 9,200 people - meaning its residents alone make up the population of a small city! There are about 20,000 people living in the entire apartment complex.

In reality, apartment building resembles a city within a city. Feast your eyes on this... 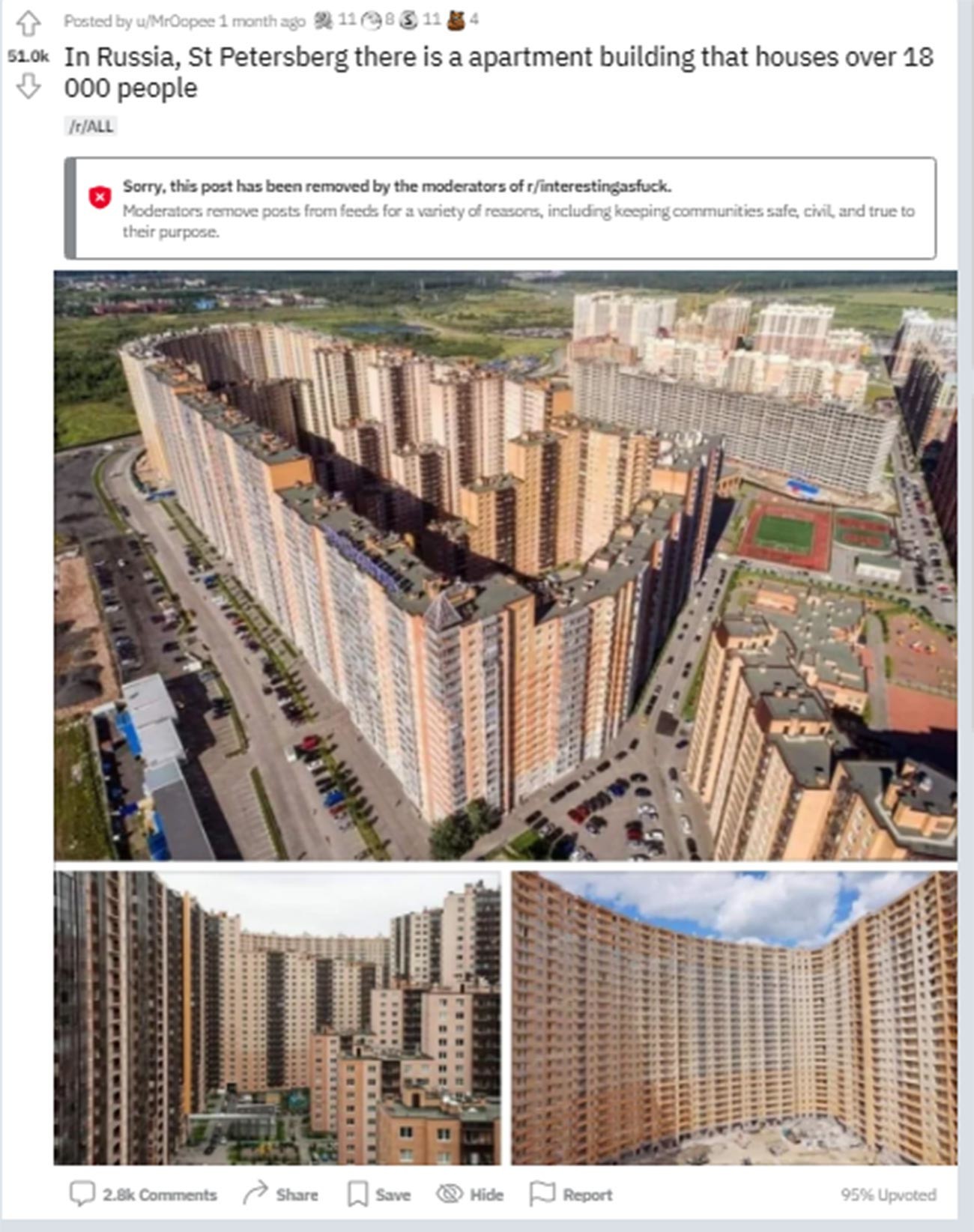 Its size has simply wowed the Reddit community, after several photos appeared on the r/interestingasfuck subreddit. The post garnered some 50,000 views after just one day, with the comment section coming alive with active discussions of how food deliveries may look there (those poor couriers!), as well as people saying that the thing resembles a Russian version of a trailer park. So, how on Earth do people live there? We asked the residents what they had to say.

Why do people live here?

We already wrote about the reasons forcing Russians to settle in “ant colonies”, given the country’s size (more on that here, in case you missed it). The apartment building from Novy Okkervil is like the king of all ant colonies in this regard. It contains 3,708 apartments, 35 entrances and 25 floors. 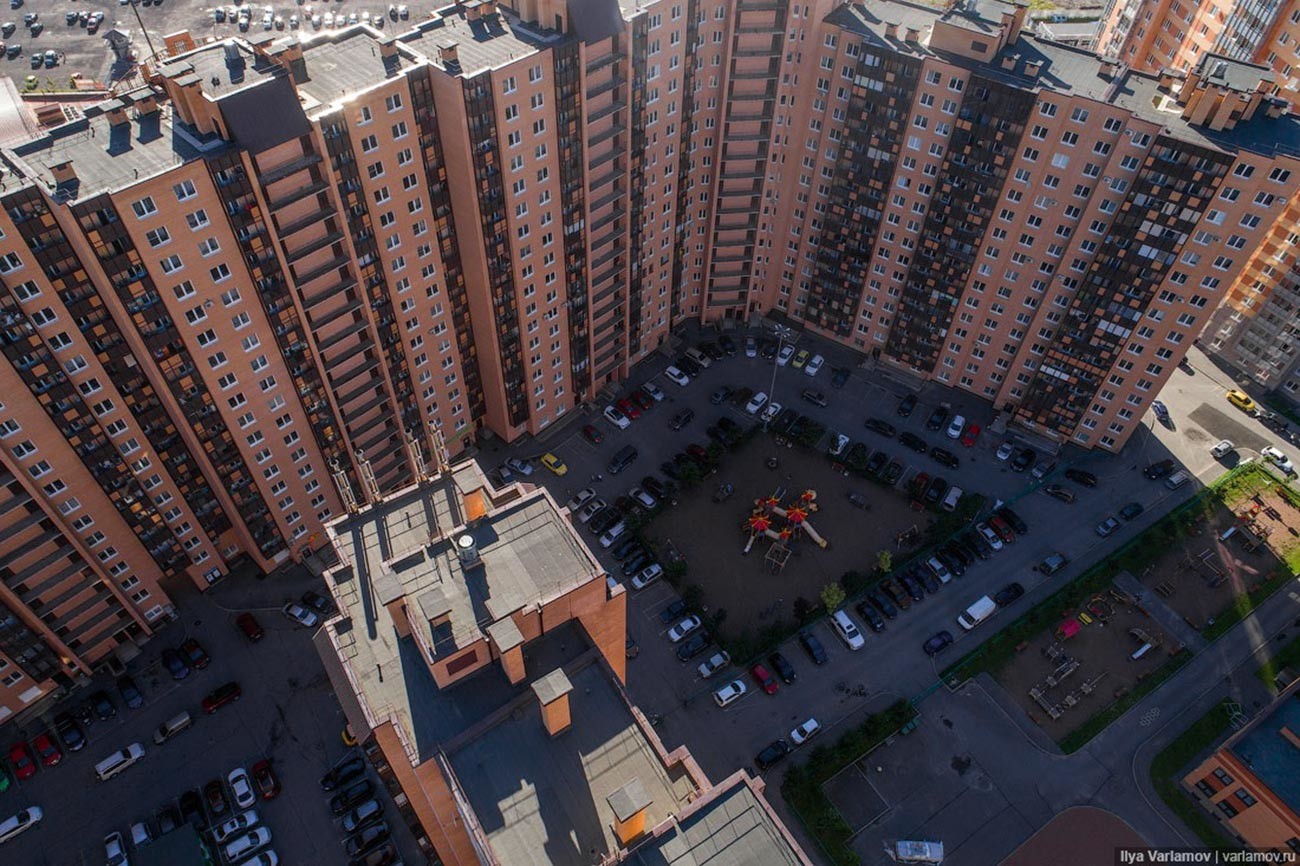 The main emphasis is on family apartments, two-bedroom ones for the most part. There’s an average of four to six apartments on each floor, while every section contains four speed elevators. The massive apartment complex appeared in 2015, with its popularity quickly soaring on the housing market.

Reddit user ‘everlastsun’ gave a more detailed account, saying that, for the most part, the building is inhabited by tenants wishing to live in comfort, who spend almost all of their time at the office. “It’s cheap, everything you need is close. Imagine you a young fella, relocated from small town to big city [sic], looking for a job for a fresh start in your life… this kinda place is perfect for that. I know it might look like a terrible place - but in fact it is not,” the user writes. He says he’s been living there for eight years.

Elena Cherepova, meanwhile, has been a tenant since the very start: “We were looking at [St.] Petersburg, didn’t like the lived-in options. There are old buildings there, the apartments are in quite a shabby state, or too expensive.” She says there are eight apartments on her floor and only two of them are two-bedroom (the rest being single bedroom). “I got the feeling that most of the apartments are up for rent, as my neighbors keep changing. It’s also possible that many are settling their elderly parents here, buying up the one-bedrooms, while themselves getting the larger apartments,” she believes.

Does the “city” have its own school, clinic and grocery store?

It does… sort of. The entire first floor of such apartment complexes is rented out to businesses. Anyone can move in, although children’s or educational centers and schools are a less frequent occurrence than ordinary stores, barber shops and cafes. ‘Novy Okkervil’ is no exception.

“The building has seven grocery stores, three beauty salons, one nalivayka [draft beer store], a florist, a construction material store, a private kindergarten, three cafes, a post office, an online pick-up point, a pharmacy, an out-patient hospital, a children’s sports center, a pet store, children’s store, a stationary store and a computer game club. That’s not all - I could’ve missed something. Right next to the building is a school and a kindergarten, a supermarket around the corner, a hypermarket about 500 meters’ walk and a bunch of other stuff. I once spent half a year without leaving the premises, as the place has everything. I worked from home,” ‘Ekz0’ writes. 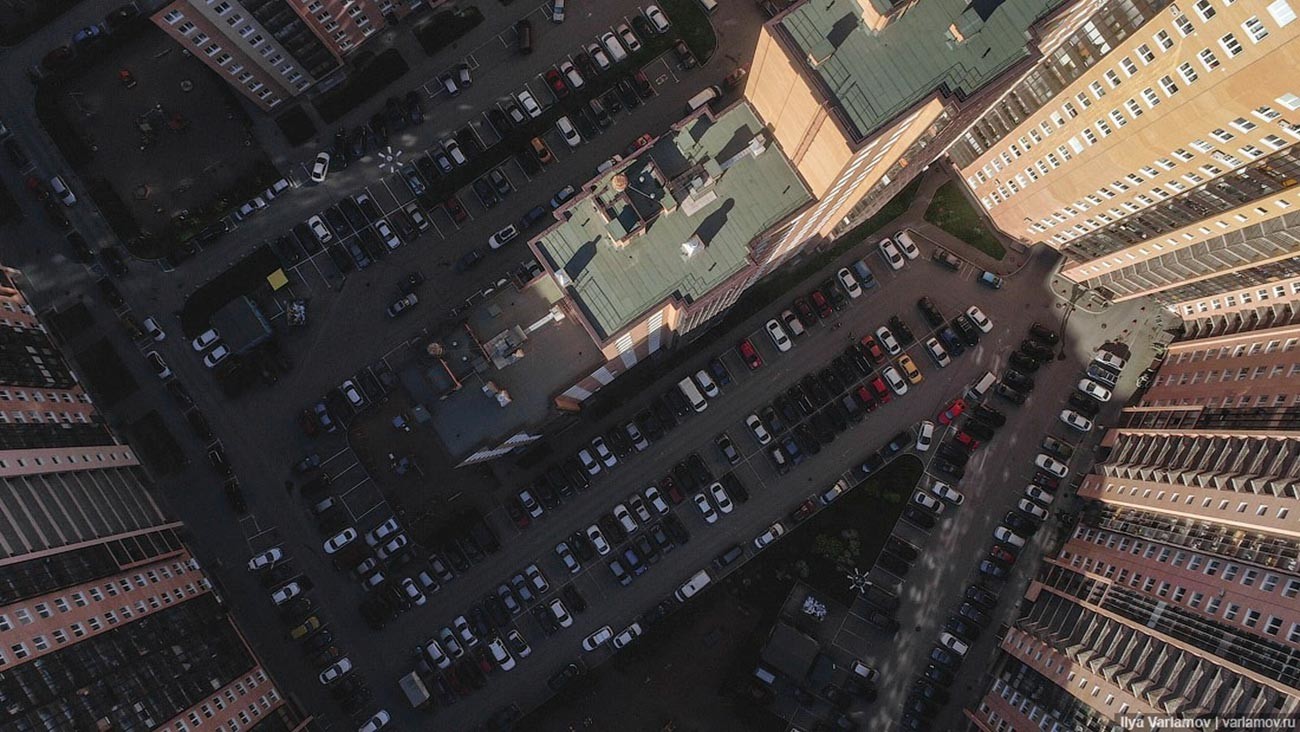 The infrastructure is the main selling point in a place like this, Elena believes: “I’ve got a swimming pool across the road, which I visit daily. A store, pharmacies, barber shops - everything within walking distance. There’s even a bicycle part store nearby.”

Tenants say that getting to the nearest metro station will take you 25 minutes on foot or by bus, which means you’re already in St.Petersburg. In order to reach the center, which is Sennaya Square, you need to travel six stations, which takes 26 minutes, according to the Yandex.Metro app. Almost everyone who lives in Novy Okkervil works in St. Petersburg.

Parking, however, can be a problem, if you don’t pay for the privilege. People park for free, in rows, next to the building. In the evening, finding a spot is a mission in itself. The three nearby playgrounds are completely blocked up by rows of cars. “The trouble is that there are three huge parking spaces right across from the building, with prices starting at 150 rubles (approx. $2) - damn, that’s cheaper than a pack of cigarettes, but they’re always half-empty. I have no issue with that, I just pay, as it means I don’t get blocked up or dented and so on,” ‘Ekz0’ says.

The building does not have its own school, although there’s one nearby, with a capacity for 1,600 students, with children from the entire micro-district attending. “I enrolled my daughter there four years ago. That 1,600-person school took in 2,200 children in the end. There were ten first grades, each containing 36 children. In order to accommodate all of them, they broke up the days into shifts: some start at 8:30, others at 11:30 and so on. But, it’s brutal - we ended up leaving that place,” Elena says. Kudrovo is now getting another school and everyone expects the situation to improve.

Is it annoying having so many neighbors?

“Not at all. I hardly meet them or hear them,” ‘everlastsun’ says. The situation with nighttime noise isn’t too bad. “Rarely (on fridays) some drunk guy will scream in a distance for a minute and that’s it.”

“The walls are thick, you don’t hear the neighbors. Everyone says “Hi” when meeting in the elevators, although no one really knows each other; no disturbances or ruckus,” ‘Ekz0’ confirms.

The building has 35 entrances. Aleksandr, who lives there with his family, had this to say: “We don’t encounter neighbors all that often. There are ten apartments on our floor, actually. I used to live in a 400-apartment building and it had one entrance. There were lines for the elevator every evening, like you get in the metro.” 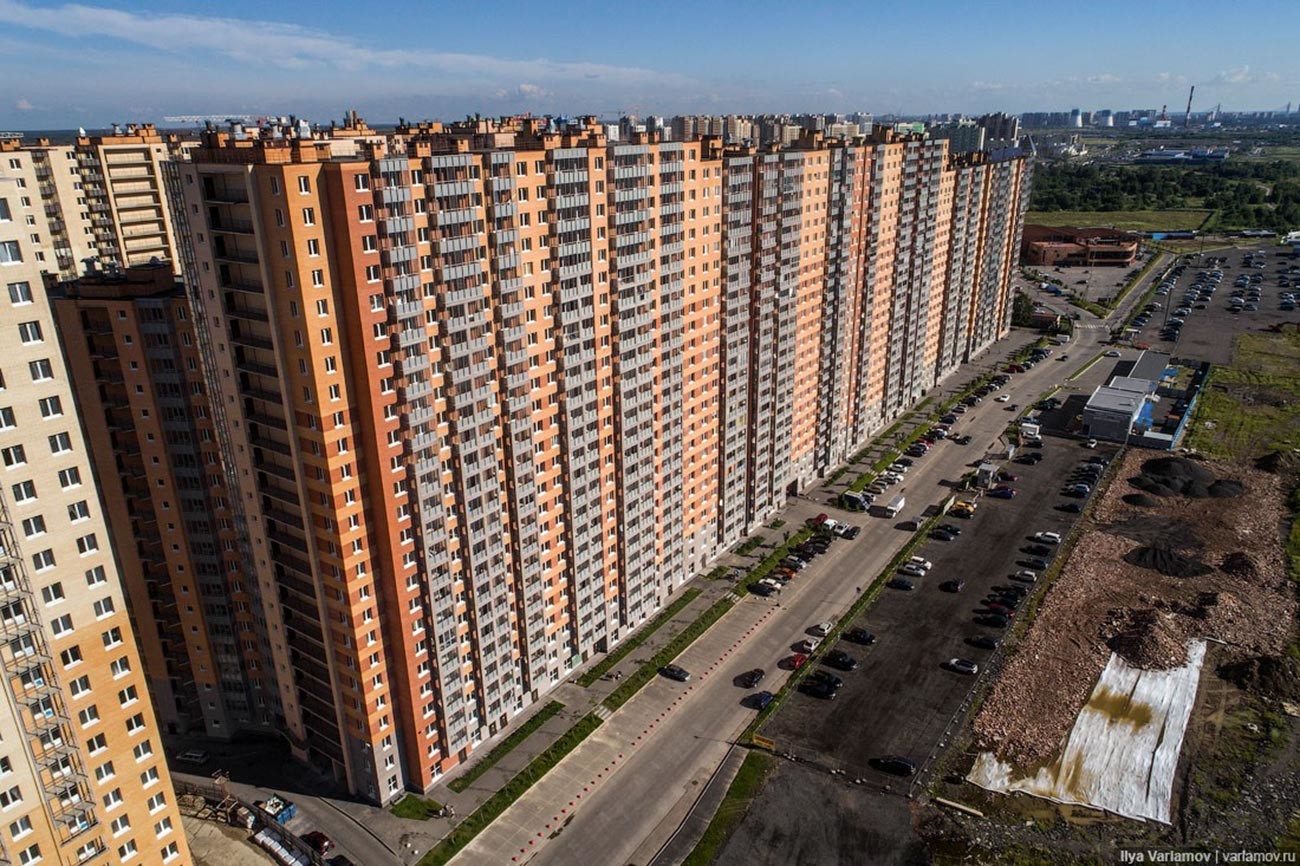 “We don’t talk from the windows (it’s very close and not that comfortable for that), but we can meet and have a chat on the public balcony (similar to fire escape stairs) when we have a cigarette,” ‘everlastsun’ says, adding that there are several online groups, where residents exchange news and seek advice or help. One of these Telegram groups contained the following message from a young woman: “Could anyone help out with the neighbors that are constantly listening to loud music during the night? No - I’ve already tried the police, no luck.”

‘Everlastsun’ says they belong to a dog owners’ club: “I have a big dog (German Shepherd) and I know a lot of other dog owners around. Usually we go for a walk together, or meet each other outside on certain spots.” Elena, meanwhile, talked about gathering with the neighbors for quiz nights several times, but the initiative “died down” pretty quickly.

Is there enough sunlight?

Ilya Varlamov, a popular blogger, famous for his urban-focused reviews, having visited Kudrovo’s New Okkervil, said: “If you observe how it’s built, you see a typical example of a situation where you have a plot of land and you try to squeeze as much dough out of it as you can. You take that plot and pass it onto a computer software, to figure out the maximum possible number of floors. There are some blocks sitting just below only for the purpose of adhering to at least some norms of insolation. Meaning that the whole building has been planned with a view to being OK’d in terms of legal regulations, nothing more. This is the cheapest, most miserable type of accommodation.” 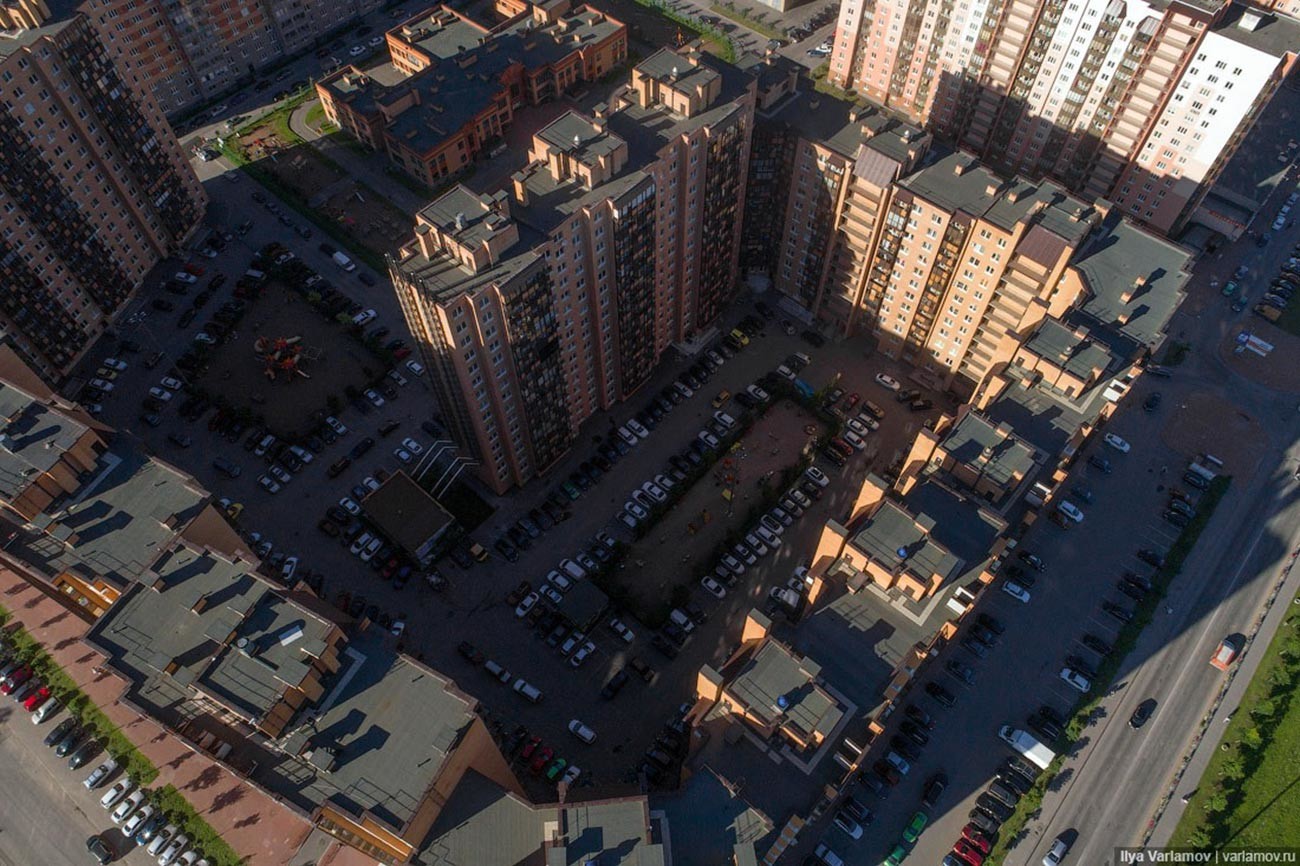 It seems the regulations are being observed, as no one complains of a lack of sunlight (during those rare days that the place sees any sun). “My windows look out onto the courtyard, there is a lot of sunlight in the morning. During the day there’s a pleasant chill. In the evening, the sun shines on the opposite side of the building, so everyone gets enough light - and, seeing as there are plenty of reflective surfaces, we really get more than enough sun,” ‘Ekz0’ claims.

How much does it cost to live there?

As far as Kudrovo is concerned, this is an elite building. “As it’s the first and most high-quality of all,” Aleksandr says. According to him, there are almost no empty apartments left there: he was trying to find another one to rent as an office space, which proved difficult.

But is it a nice place to live overall?

‘Everlastsun’ confesses that it’s a difficult question. “Personally - I would not prefer to live here my whole life. But it’s not like a terrible place to be in. It’s fine and even nice. There are schools and kindergartens around, anything you need is within reach, a good park/forest not too far (30 minutes walk). And yeah, it feels safe.” 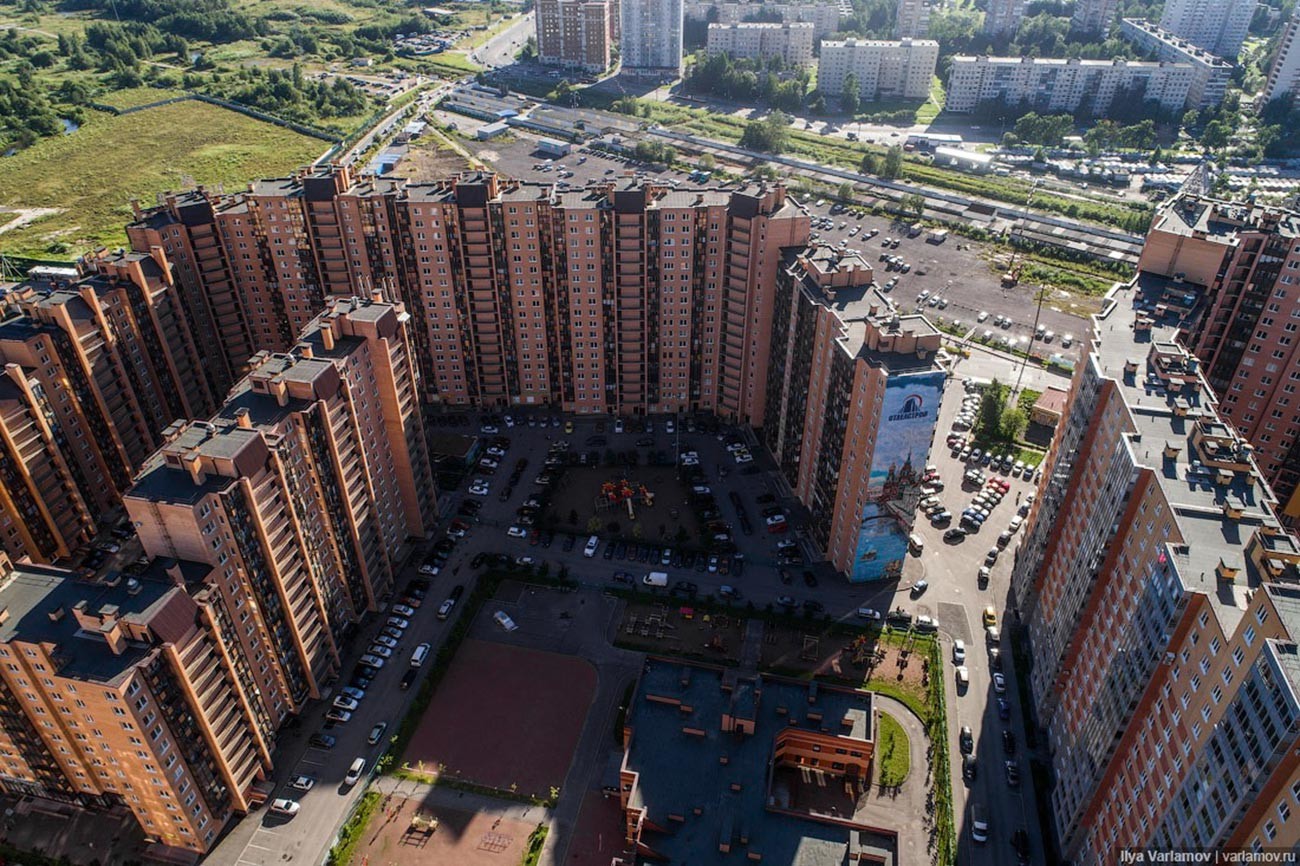 For his part, Aleksandr claims that it’s the best building he’s lived in in the past 20 years. “There are three main advantages. First - the quality of the building itself. We have four luxurious and spacious elevators that you can even use for transporting furniture. And there’s video surveillance everywhere, you’re not scared to leave your car out. Second: the maintenance. Everything is clean, washed and even the elevator mirrors are cleaner than the ones you have at home. Trash doesn’t pile up and gets collected regularly. Third: the shopping. You can reach a grocery store in a couple of minutes and buy everything you need. The school is a minute away, the kindergarten - two. We’re happy here. I know a couple more people from the building that are also quite satisfied.”

“Yeah, it’s total bliss,” ‘Ekz0’ confirms. The only negative he mentions is the “floating” monthly price on utilities: 1,400 rubles (approx. $19) during the summer and up to 5,500 rubles (approx. $73) in the winter for a one-bedroom apartment, which has him constantly taking the operating company to court and which frequently ends up paying part of the sum. There are also traffic jams in the mornings and evenings.

“Other than that - we don’t really suffer from any overcrowding, droughts or epidemics here; obnoxious car owners, meanwhile, quickly learn their lesson with 7-8,000 ruble (approx. $100) fines, the couriers aren’t left homeless simply because they can’t find an exit out of the courtyard and there are no registered cases of vampirism, brought on by solar light deficiency.”