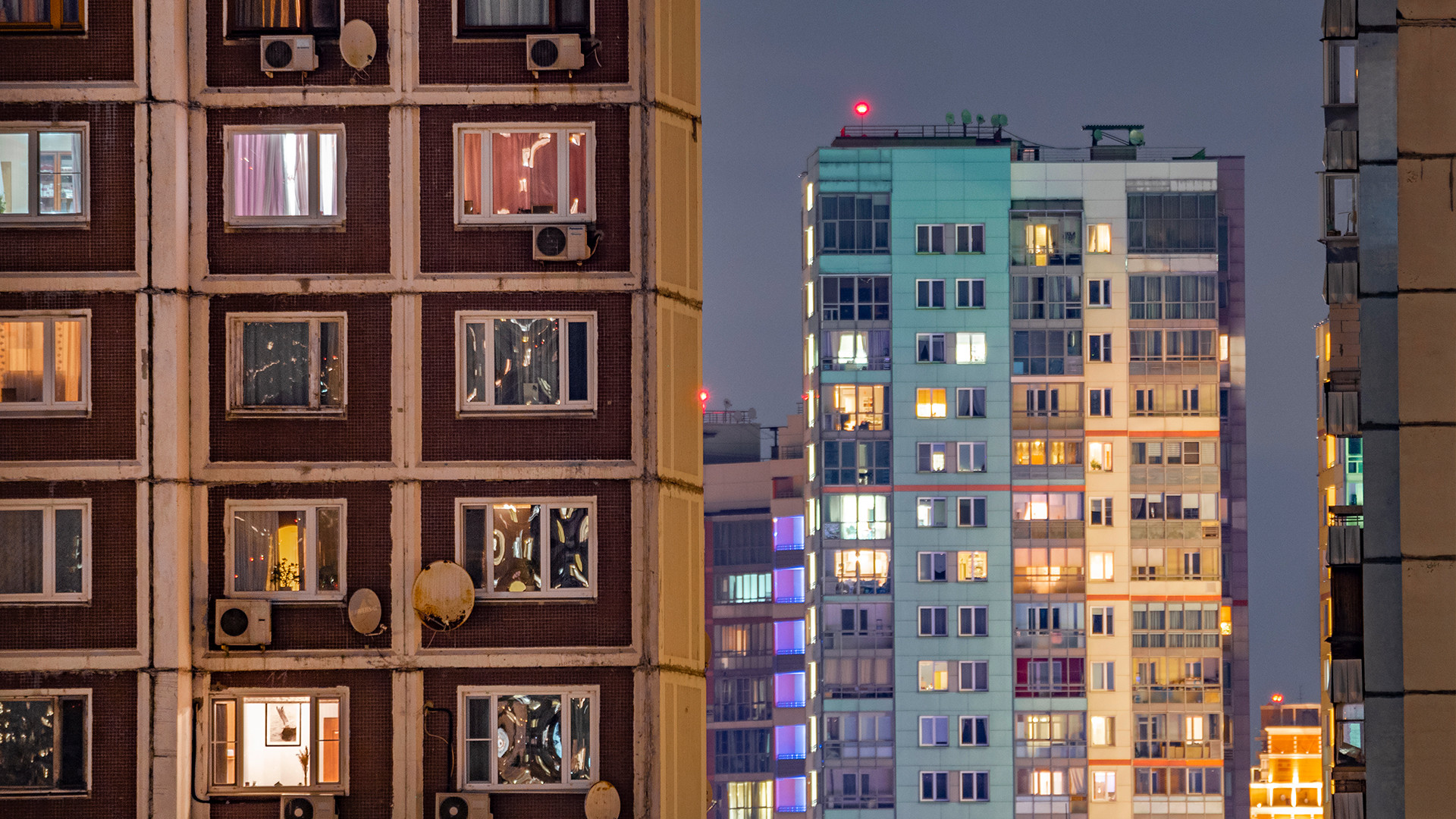 Konstantin Kokoshkin/Global Look Press
These typical residential blocks fill the outskirts of cities throughout the country in the exact same way. Why does Russia continue building such depressing panel houses?

Take a look at these photos. One was taken in Murmansk, the others in Moscow and Vladivostok. 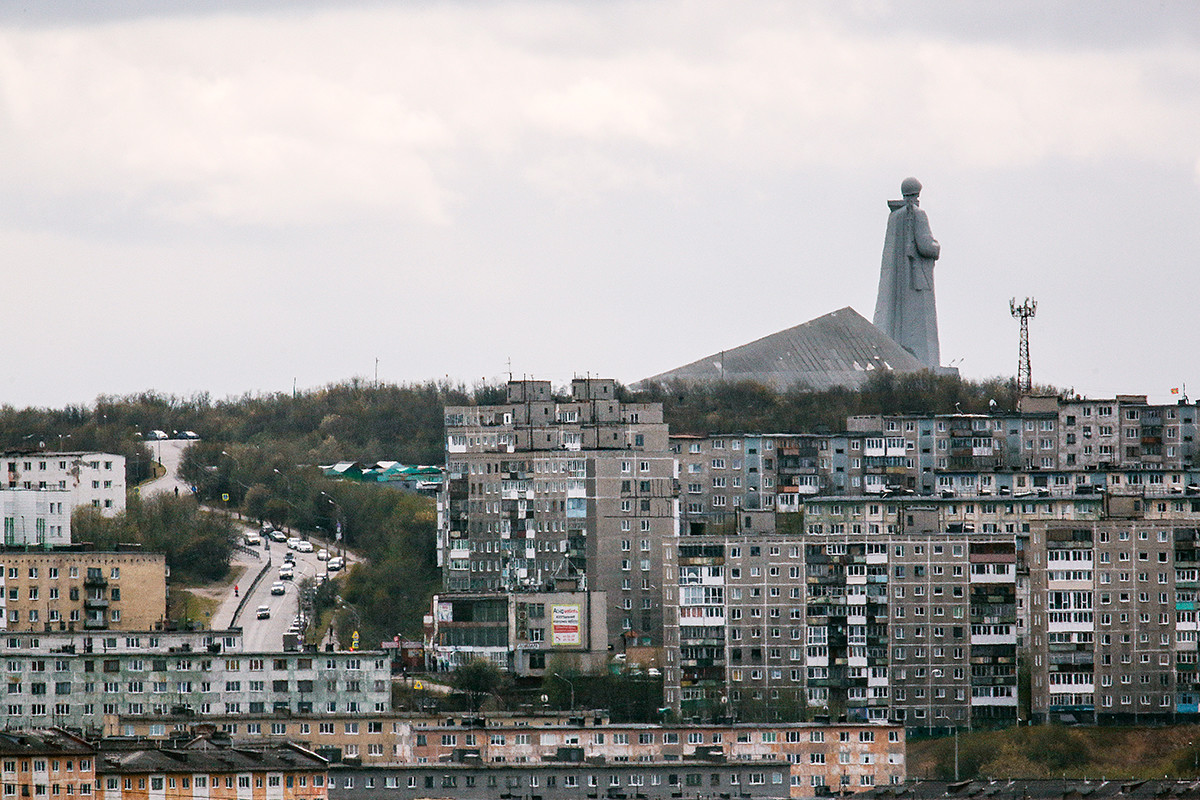 A district in Murmansk.

Even though there are thousands of miles between the cities, these residential areas built in the Soviet era look like twins. 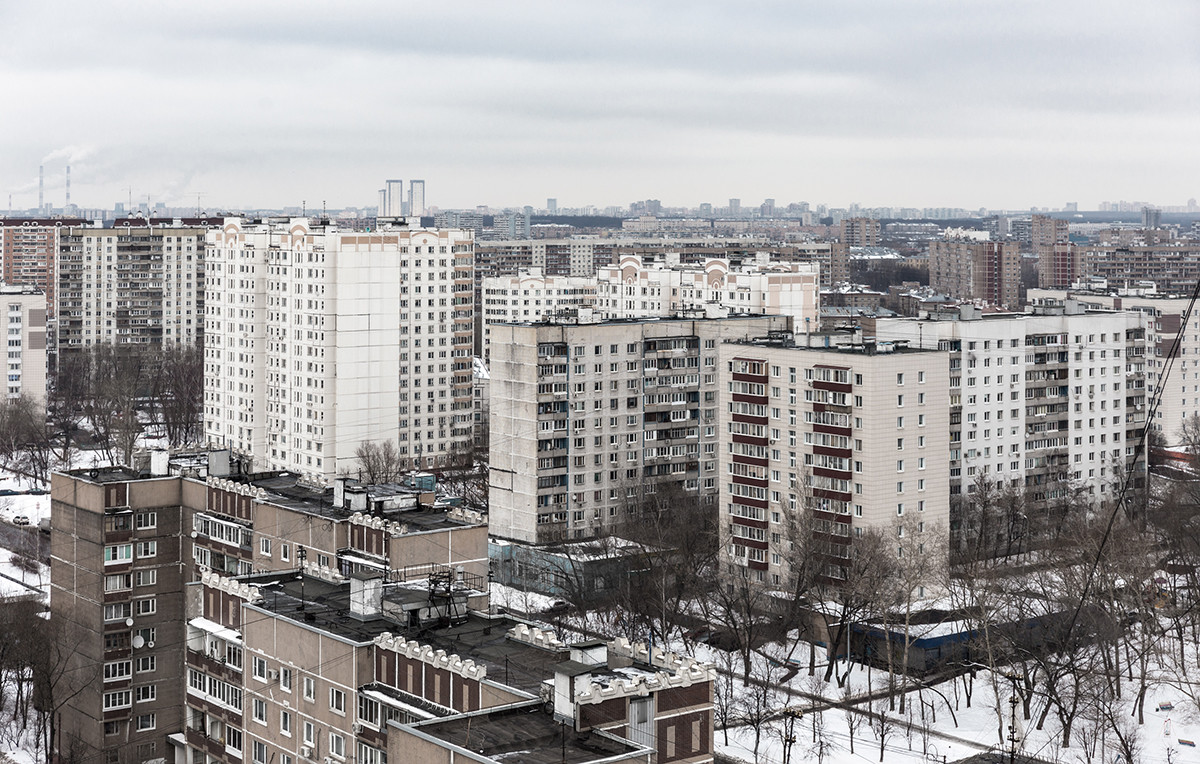 And you can find them in any city in Russia and throughout the former Soviet Union. So why are there so many of these gloomy panel blocks in Russia? 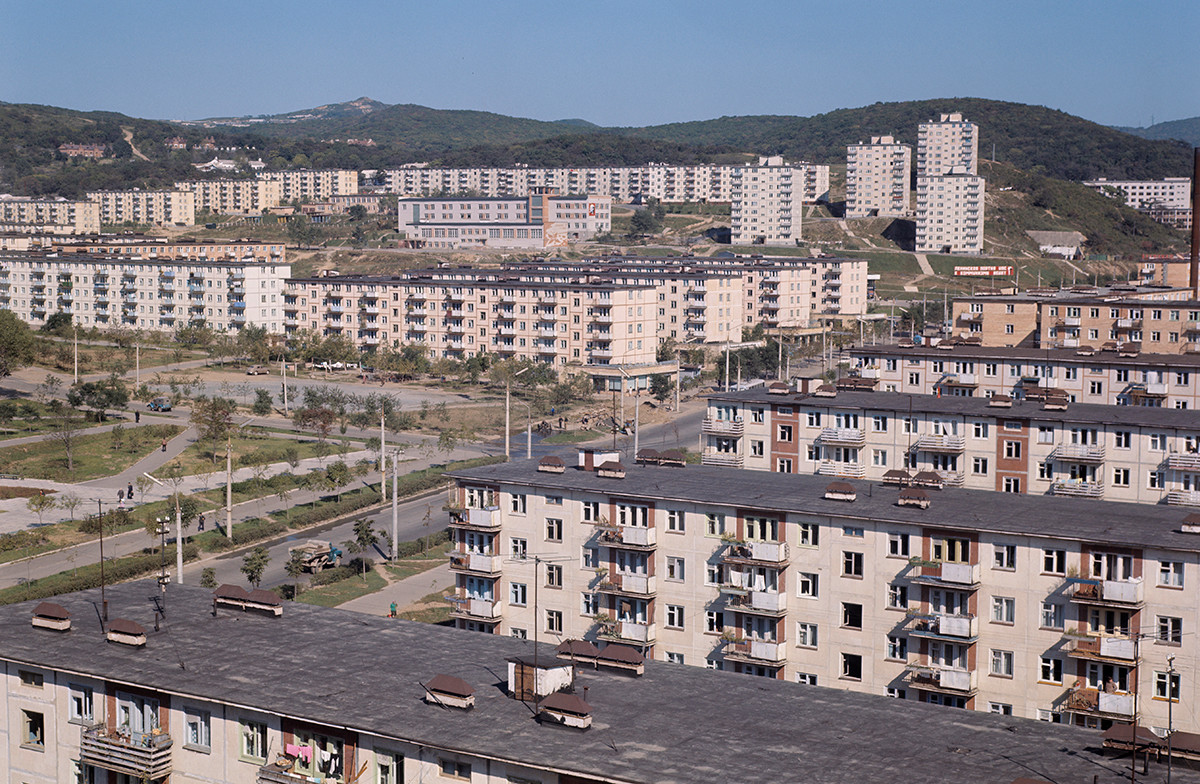 A residential area in Vladivostok.

Over the last century, Russian cities have undergone colossal change. For hundreds of years, most citizens lived in villages. But in the wave of 1930s industrialization and following World War II, the country’s urban population grew enormously. In 1917, only 17% people lived in cities, and by 1950 almost 50% did. This rapid urban growth meant new housing had to be built as quickly as possible. The Soviet Union began experimenting with mass construction techniques that led to the standardized panel buildings that look almost identical to each other and fill residential areas from Kaliningrad to Vladivostok. 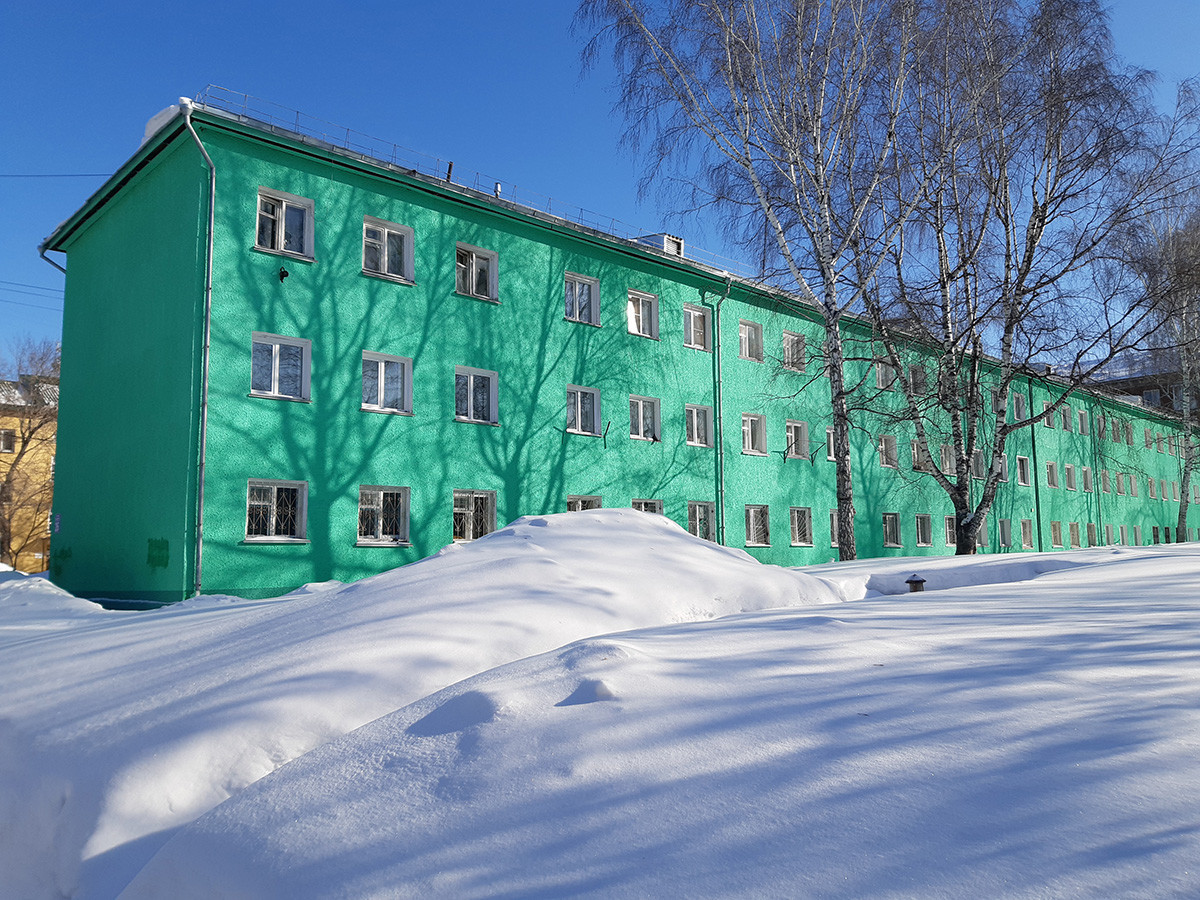 This is how the former socialist city in Novosibirsk looks like today.

Panel construction was not actually a Soviet invention and was used in Germany, the Netherlands and France before WWII. It was, however, the Soviets that perfected panel buildings.

In 1954, the Soviet Union’s new leader, Nikita Khrushchev, sharply criticized who new housing was being constructed, calling it too expensive, especially Stalin's famous “Empire style.” At the Communist party’s next congress, they demanded an end to the housing shortage within 20 years, deciding that every family should receive their own apartment and, of course, at no cost. 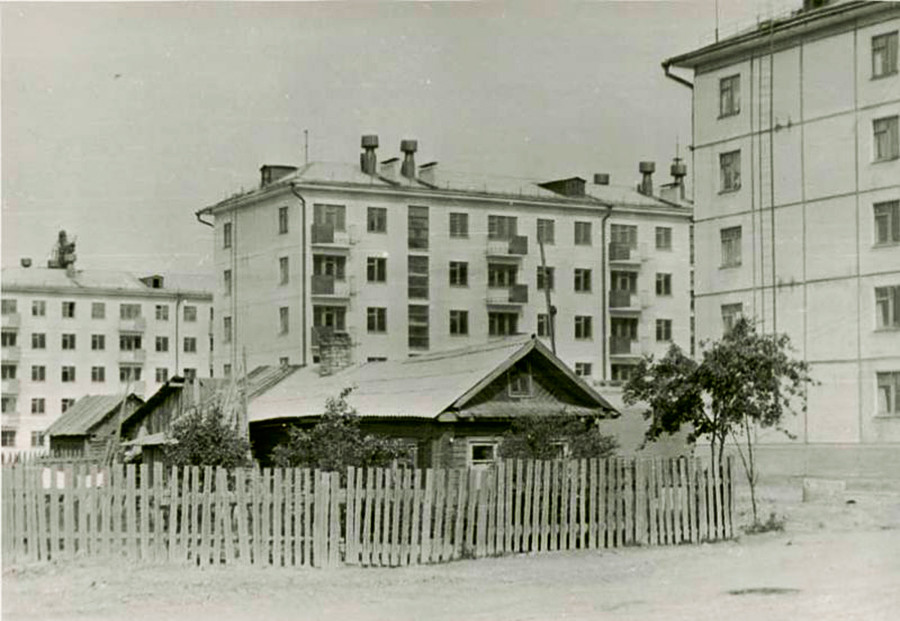 All resources were thrown into the construction of new residential buildings, which were called "Khrushchyovkas." Architects distinguish about 10 different versions of such buildings, but they mostly had five storeys, no elevators (which were expensive) and apartments with small kitchens. Some were built from bricks, but the most widespread materials were reinforced concrete panels. In many cities, factories opened to produce such panels, which significantly reduced logistics costs. The construction of one building took just two weeks, and in less than 10 years one in four Soviet families was provided with their own apartments. Just imagine how excited people felt after living in barracks or communal houses their whole lives! 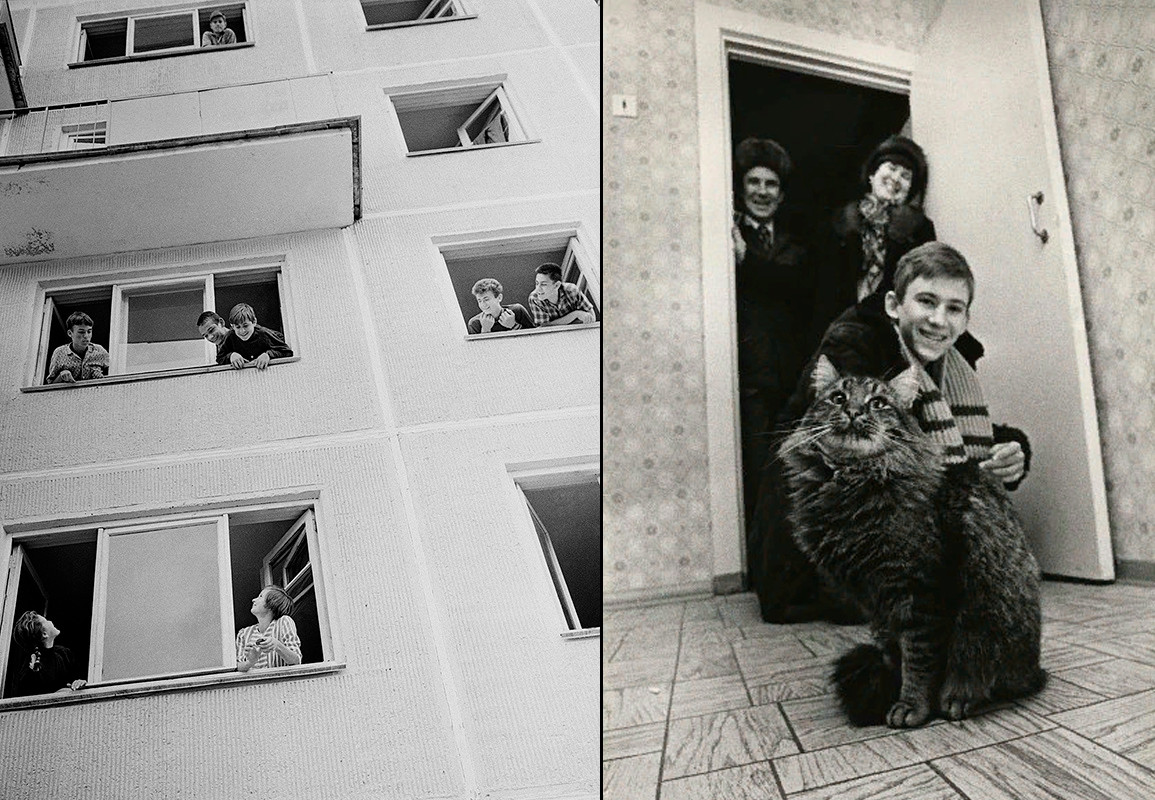 Among the typical panel houses there were some experimental buildings that for various reasons never went into mass production. In St. Petersburg, a "Proto-khrushchyovka" from 1955 is still preserved. It features large kitchens and high ceilings and was supposed to be one of the widely-built models, but Khrushchev determined it was too expensive, and subsequent housing blocks were much more modest. 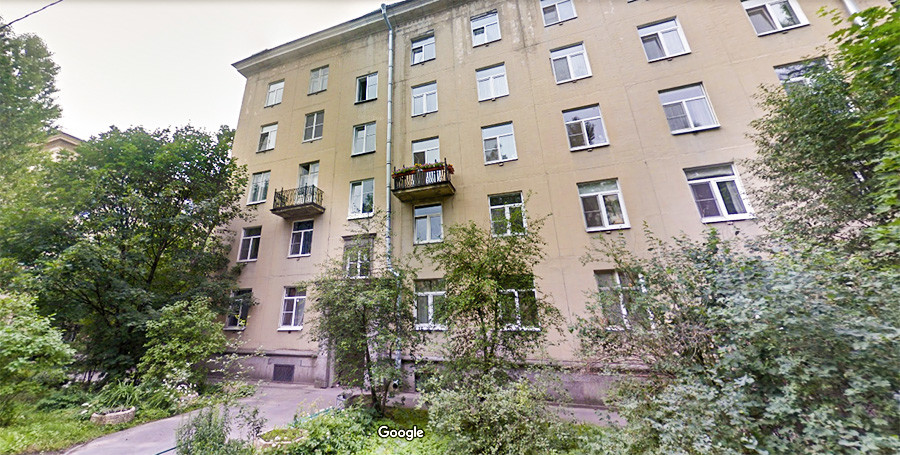 In Ulan-Ude, the capital of Buryatia, you will find panel houses decorated with national ornaments. 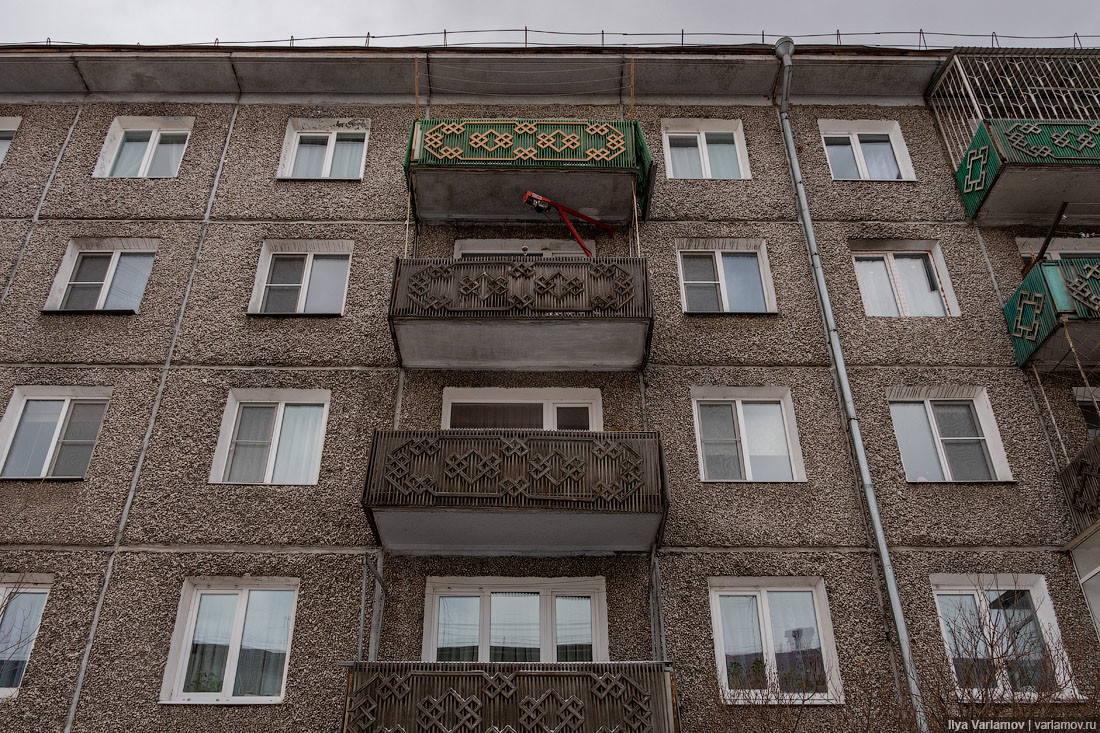 In cities in permafrost areas, all the houses are built on stilts so that the heat coming from the building does not melt the frozen ground. In northern cities, houses are painted in bright colors to liven up the city’s appearance. 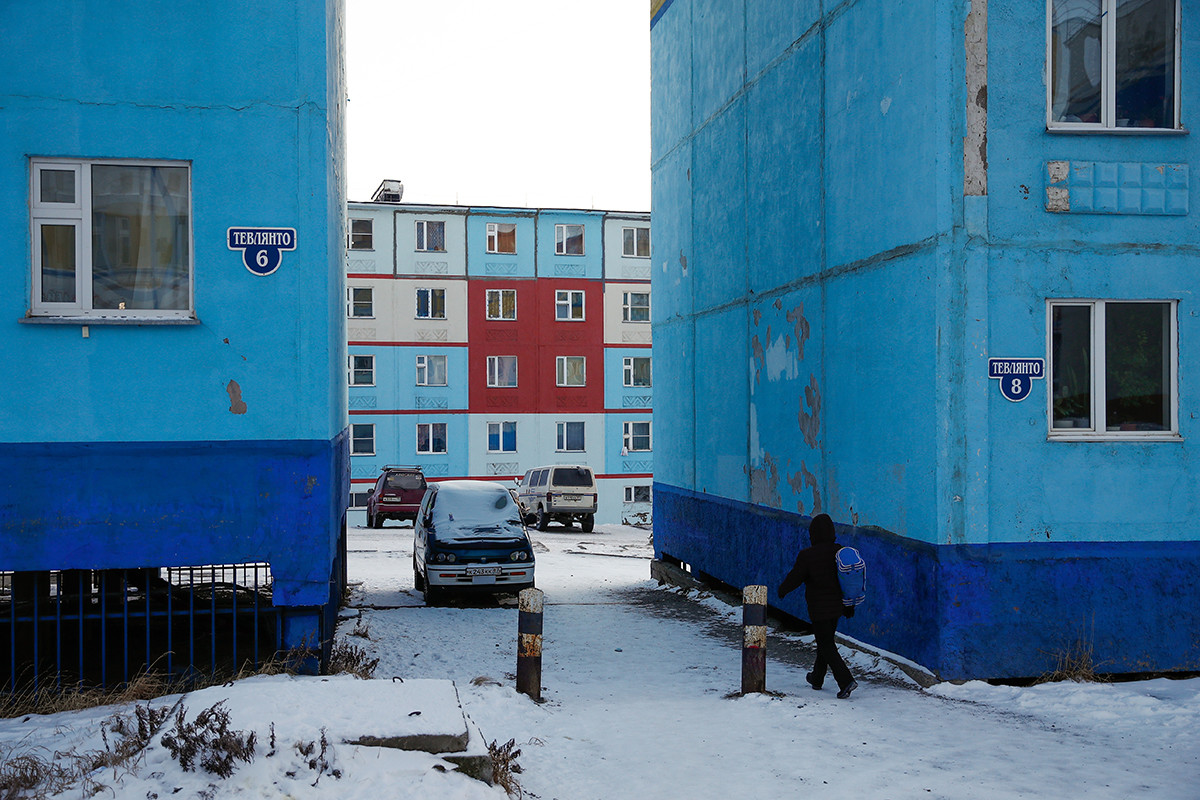 By the end of the 1960s, panel "Khrushchyvkas" were replaced by ”Brezhnevkas," named after Khrushchev’s successor, Leonid Brezhnev. By this time, technological developments had made it possible to build cheap 9-, 12-, and 16-storey residential panel buildings with elevators, garbage chutes and larger apartments.

This technology was cheap, but made for safe and long-lasting buildings. Before long, such panel houses began to appear throughout the new areas of Moscow, St. Petersburg and other cities, making all the residential areas look very similar. In 1986, Mikhail Gorbachev promised that by 2000 each family would have their own apartment, but after the fall of the USSR, the era of free state housing came to an end. 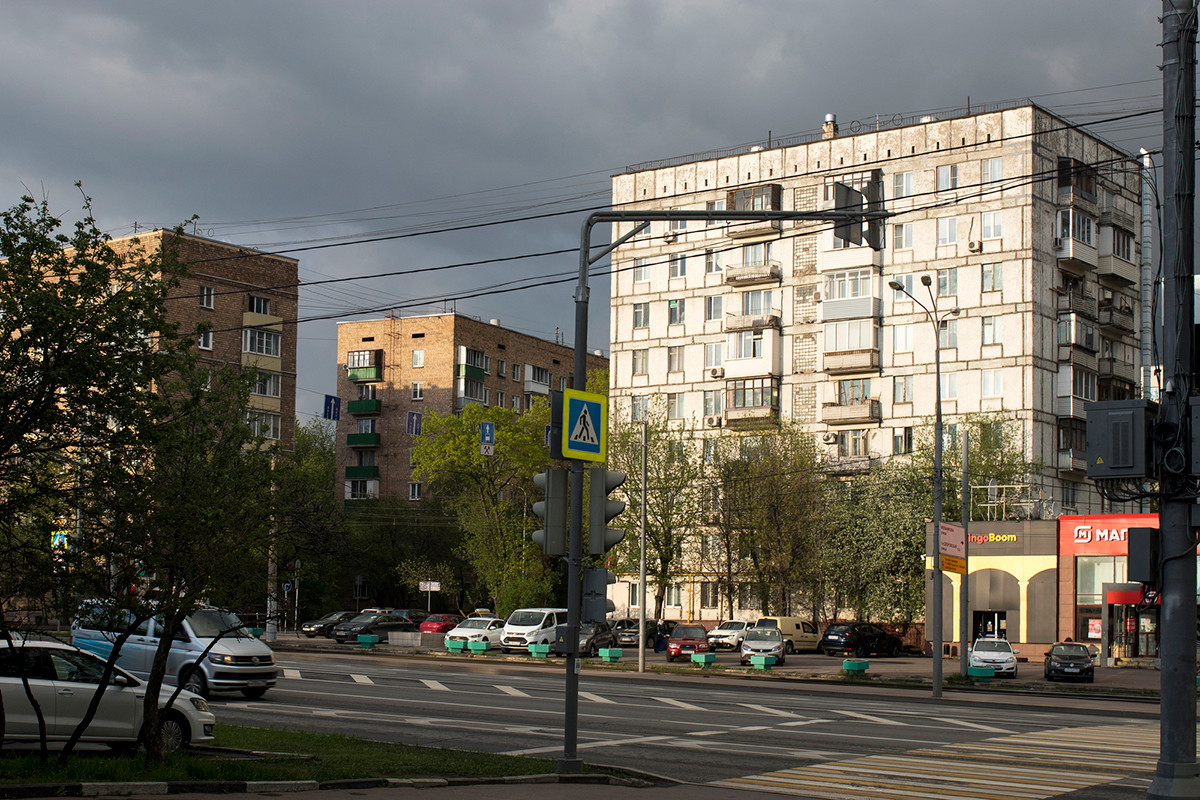 Nevertheless, three quarters of Russia’s urban residents live in high-rises, most of which are still the same Soviet buildings. Modern urbanists say that such typical gloomy housing blocks are depressing and have a negative impact on the psyche.

What kind of houses are being built in Russia?

These days, there are plenty of interesting housing options in big cities, including beautiful buildings with underground parking and vivid facades. However, most of these come at an exorbitantly high price for the average Russian family. 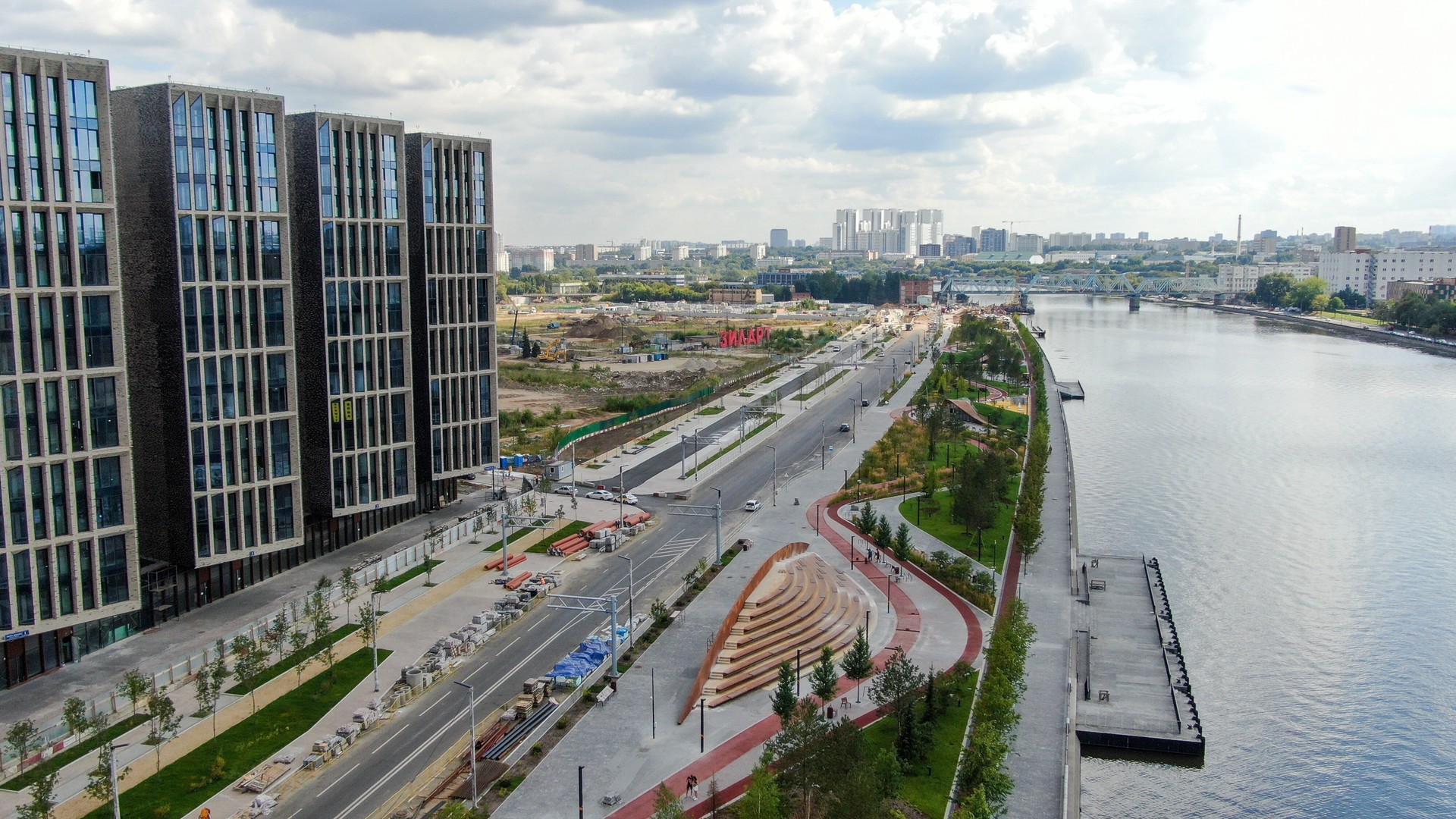 A new residential area in Moscow not far from the city center.

But residential areas with more budget housing options continue to be built from panels or mixed panel-monolithic technology. These typical residential blocks remained the most affordable way for the state to resolve housing problems for millions of families. The downside is that they make urban outskirts depressing throughout the country. The suburbs today are built up with giant blocks of micro-apartments, which in Russia are called "cheloveyniks" (something like "manthills" in English). They do, of course, look modern, but the concentration of people there is actually much higher. There can be several THOUSAND apartments in one of these residential complexes, while in Khrushchyovkas there were less than a hundred. 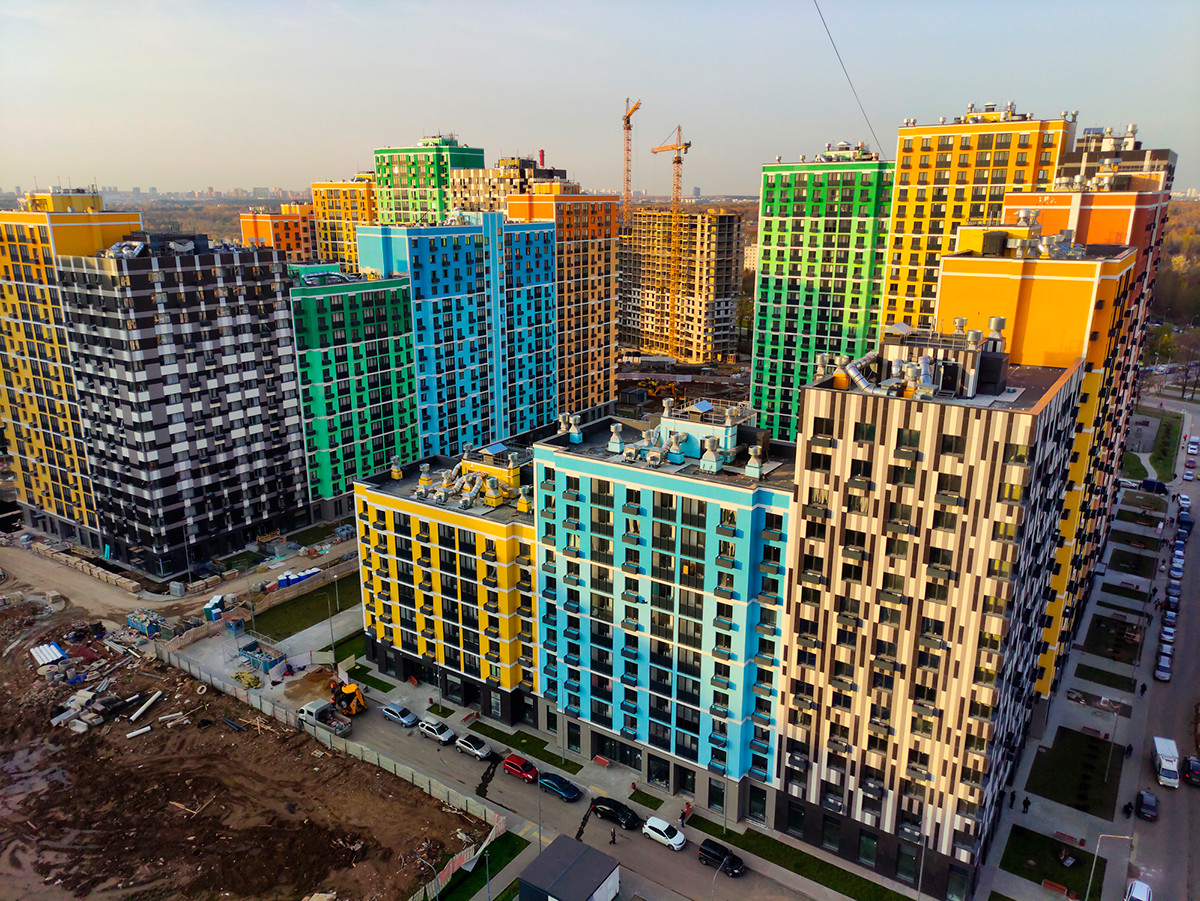