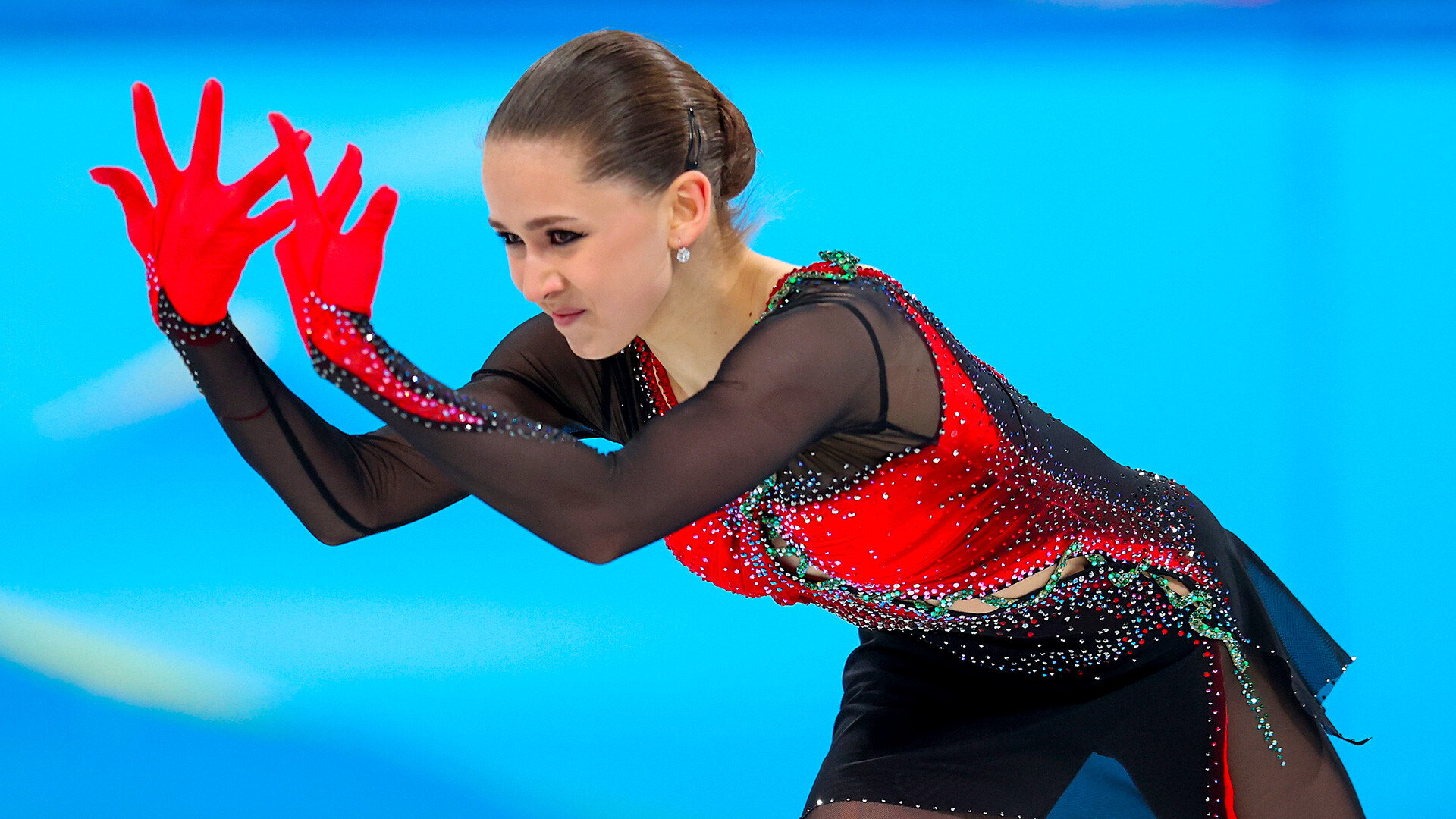 Catherine Ivill/Getty Images
Dog lover, go-karting fan, future psychologist, as well as an incredibly strong and graceful athlete and winner of the 2022 Beijing Olympics in the team event. And all this about a 15-year-old girl from Kazan.

After the Russian figure skating team won a gold medal, the awarding ceremony scheduled for February 7 was postponed because of unclear reasons. Soon, Inside The Games and other media quoting anonymous sources reported that the ceremony delay was reportedly caused by a positive doping test of Kamila Valieva.

The International Olympic Committee (IOC) didn’t confirm the information then, saying that it was speculation and that the ceremony was being delayed because of some legal intricacies they have been ironing out.

The International Testing Agency (ITA) reported that a test Valieva made in December 2021 during the Russian Championships showed a positive result for trimetazidine, a substance banned by WADA. The lab that did this test provided it on February 8, right in the midst of the Olympics. It’s still not clear how the medicine appeared in the blood of Valieva, however, the Russian Anti-Doping Agency (RUSADA) imposed a temporary suspension on the athlete, which her team promptly appealed and the suspension was lifted on February 9. The next day, Kamila took part in open training.

The IOC, WADA and the International Skating Union (ISU) filed a protest about the lifted suspension with the Court of Arbitration for Sport. On February 14, the court reportedly rejected the appeals and allowed Kamila to perform in the individual tournament on February 15.

The award ceremony for the team classification, however, hasn’t been held yet and the IOC is still deciding whether to punish the athlete.

“A girl with too much talent,” coach, Eteri Tutberidze, once described the 15-year-old figure skater Kamila Valiyeva. “She’s flexible, she understands gliding and she’s bouncy.” 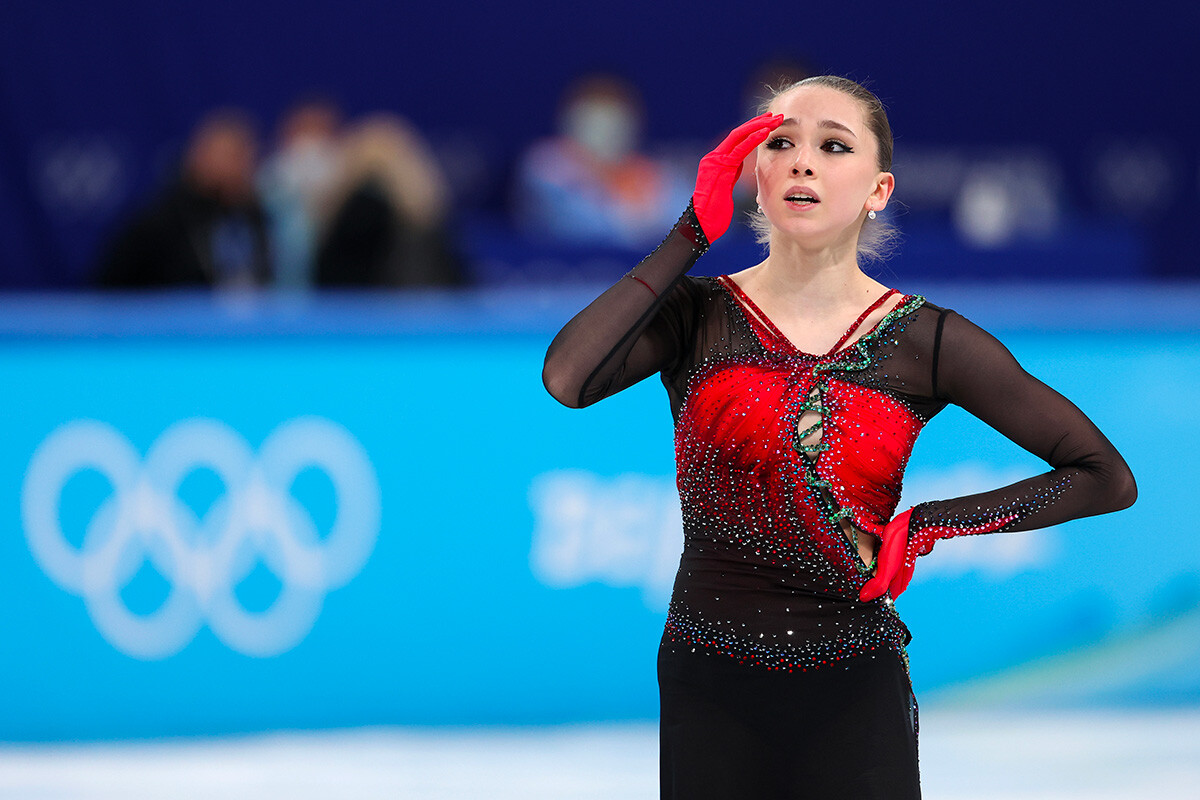 Kamila demonstrated her leaping ability at the 2022 Olympics in Beijing - she became the first performer of the quad jump at the Olympics. She was responsible for the quadruple salchow, a quadruple toe loop and a triple axel in the free skate program. Valieva earned 178.92 points for her performance and placed first in the team event.

Choice between three sports and working on myself

Kamila was born April 26, 2006, in Kazan. Since childhood, she was very active, so her parents decided to let her take up sports. Kamila did ballet, rhythmic gymnastics, figure skating and, at the age of four, she had good stretching ability. However, at the age of five, her mother asked her to choose one sport and Valiyeva preferred skating.

“I think when you push, roll on the ice, roll programs in front of the audience, jump... It’s all very exciting, thrilling. <...> They inserted footwork into the programs, like in ballet, in puffs - we wanted to diversify my skating,” Valiyeva recalled. 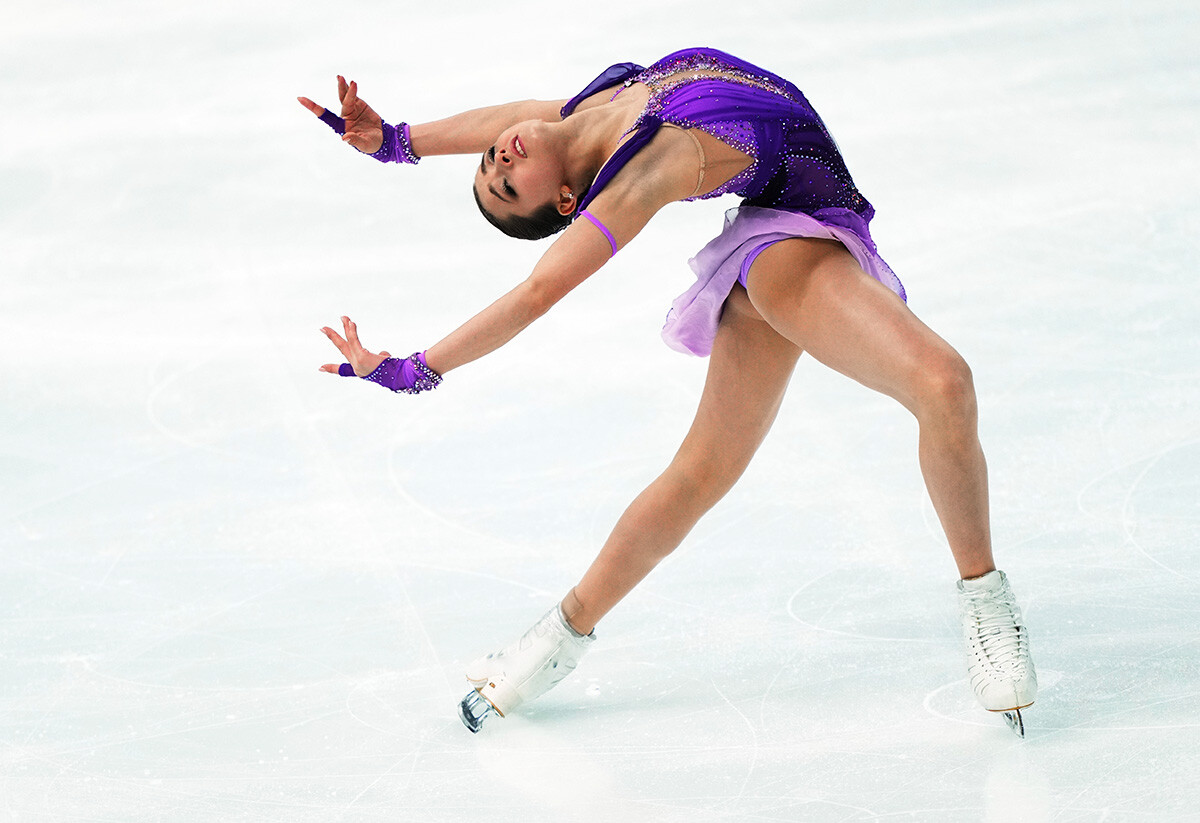 In 2012, Kamila’s parents moved to Moscow and the girl continued figure skating there. In 2018, 12-year-old Kamila got to a selection screening to attend the sports school ‘Sambo-70’ - Eteri Tutberidze asked to show her some spins and jumps and, after seeing enough, took her into her group. 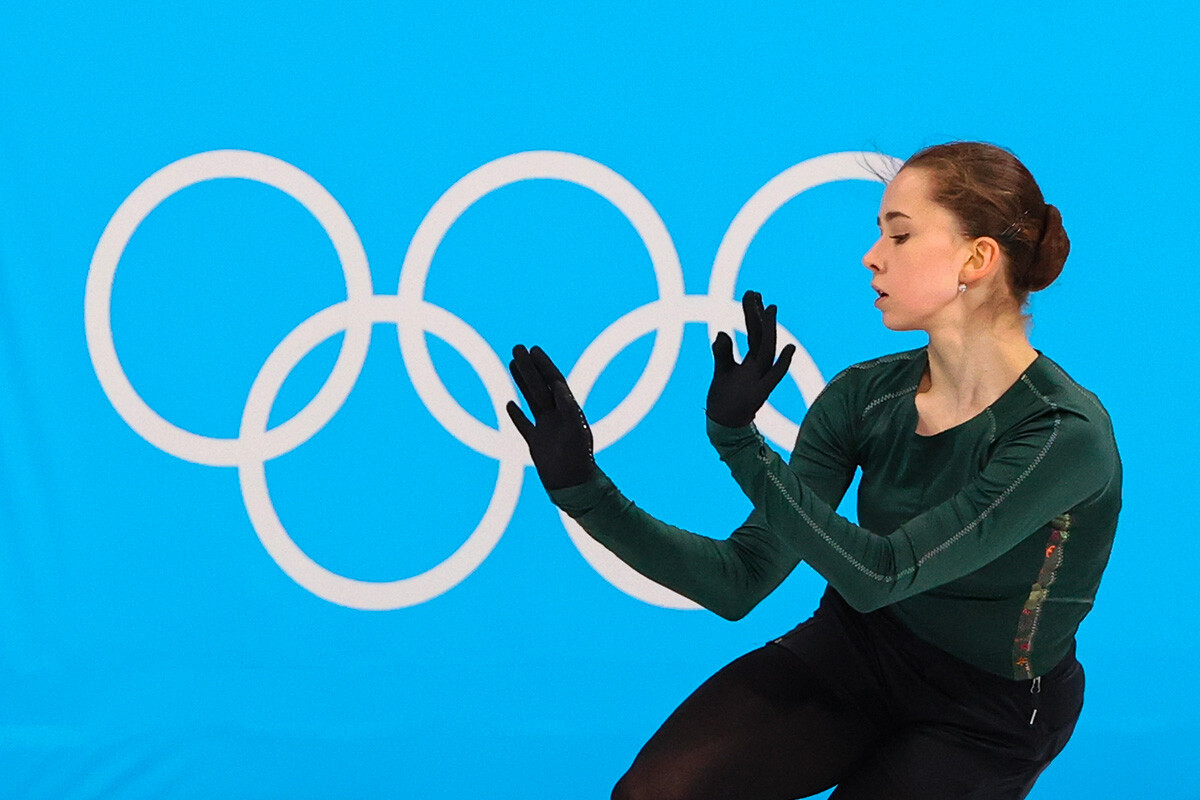 At the beginning of her training with Tutberidze, Kamila was weaker than the other athletes; she also had problems with attitudes and stability - Valiyeva admits this herself.

“While I was finishing one lap, they (other pupils) were rolling the second and third and then they were doing another ten elements each. At first, it was hard for me to get used to the pace, to go back and forth and make jumps,” Valiyeva said. 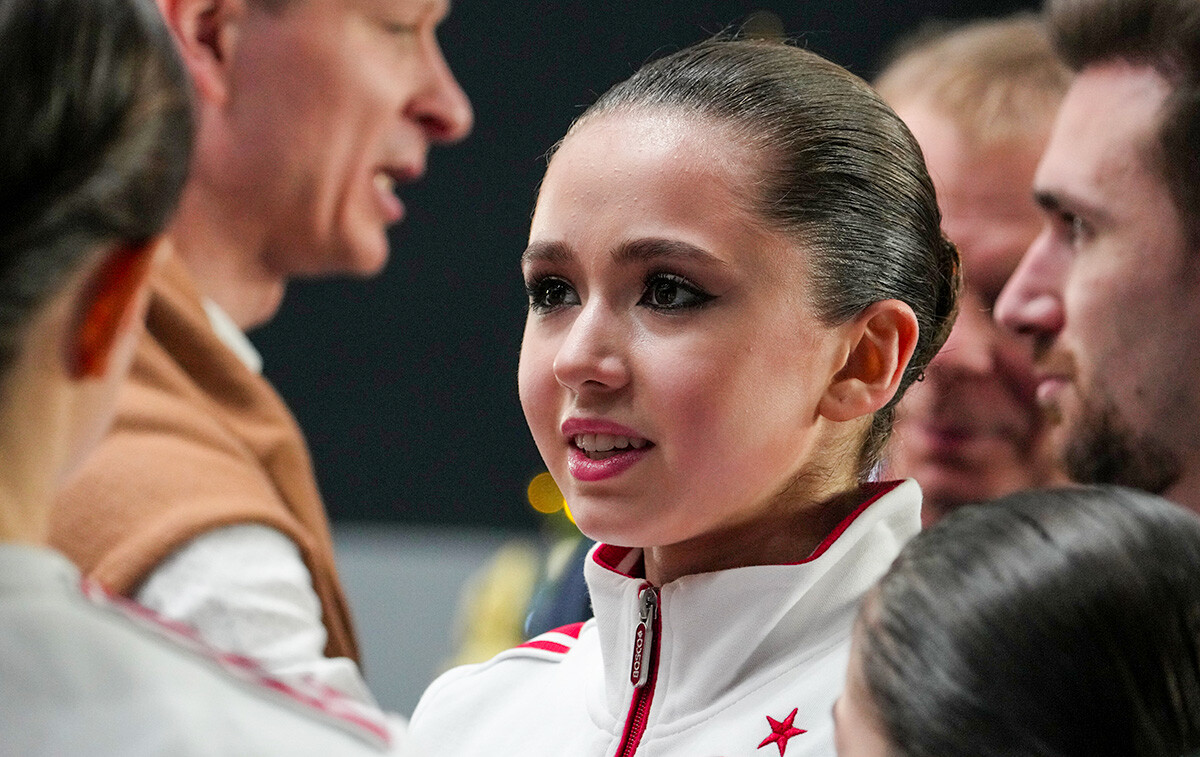 Gradually, Kamila Valieva became accustomed to it, began to work on herself and her performance became close to ideal. Below is her performance at the Moscow championships in 2015:

First victories and the road to the Olympics

In 2019/2020, her first season together with Tutberidze, Kamila’s program was ‘Girl on a Ball’ (short program), based on the painting of the same name by the Spanish artist Pablo Picasso. Then, the program was noticed by Picasso’s granddaughter Diana and personally congratulated the figure skater. She also won with the program at the Junior Grand Prix in France (where she became the fourth junior skater in history to score over 200 points) and then the World Junior Championships. That same season, Kamila performed a free routine to the music of rock band Muse, ‘Exogenesis: Symphony Pt.3 (Redemption)’. 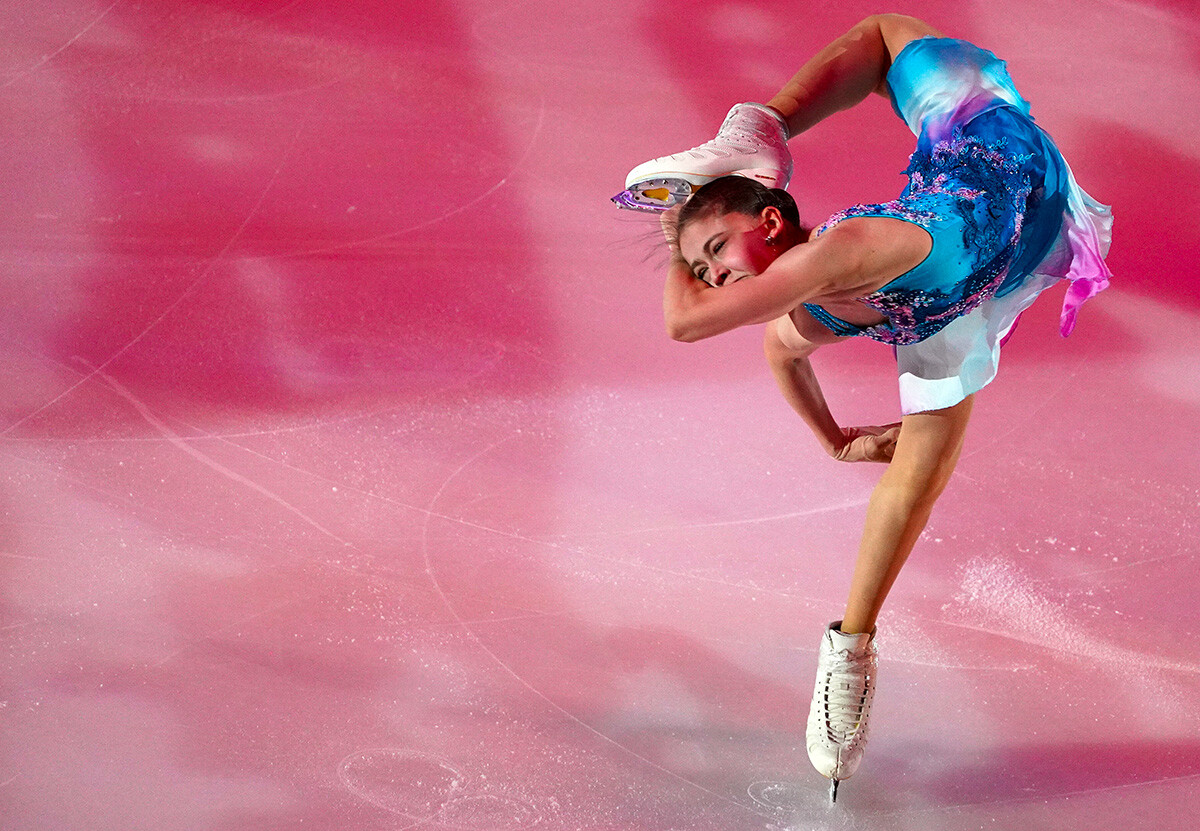 Kamila Valiyeva (Russia) at the exhibition performance of the Grand Prix of Figure Skating in Moscow. 22.11.2020

The following season, Kamila tried her hand at adult figure skating with the even more difficult ‘Bolero’ program (free skating), but only in Russia.  Because of the pandemic, all junior championships were canceled that year, but the Russian Figure Skating Federation made an exception for Kamila, who was allowed to compete as an adult. Her main achievement of the season was gold at the Russian Cup. In the finals, she fell while attempting a quadruple salchow and also missed a jump, but still took first place.

In 2021, the athlete also presented a new program to the music of Kirill Richter, ‘In Memoriam’. She dedicated it to all the people who have passed away, especially her grandmother.

“It’s a story about a butterfly. I follow it the whole program, catch it, but, in the end, I let it go. Kirill Richter said that this music is a memory of the dead and I dedicate this program to my grandmother, who died in 2019,” Valieva shared. 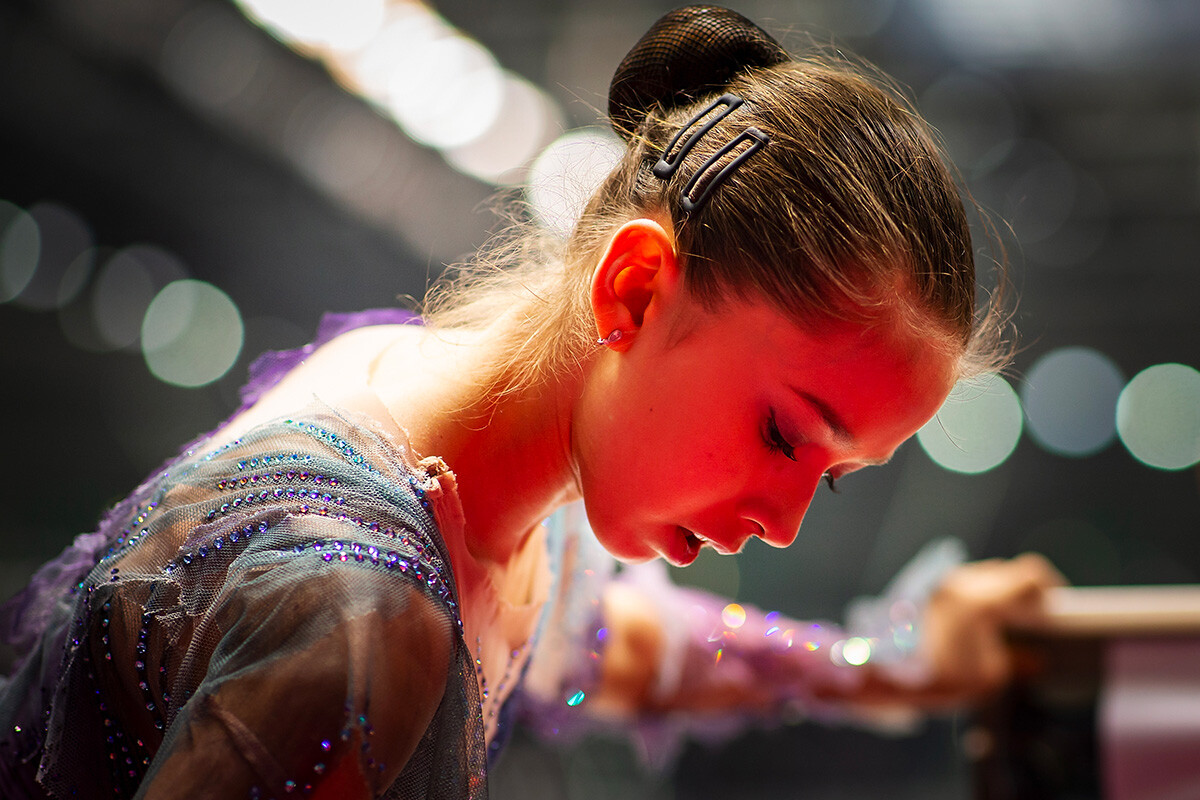 Kamila Valieva of Russia prepares in the Junior Ladies Free Skating during the ISU Grand Prix of Figure Skating Final (Senior & Junior) at Palavela Arena on December 06, 2019 in Turin, Italy

With the program ‘In Memoriam’ and with ‘Bolero’, the athlete won gold at the international tournament Skate Canada, won gold at the Russian Championship, becoming the main contender to participate in the Olympic Games in Beijing. In January 2022, Kamila won the European Championship, setting a world record in the short program (90.45). By the way, the record for the free program (185.29) and total points (272.71) are also hers and were set at the Rostelecom Cup in November 2021. 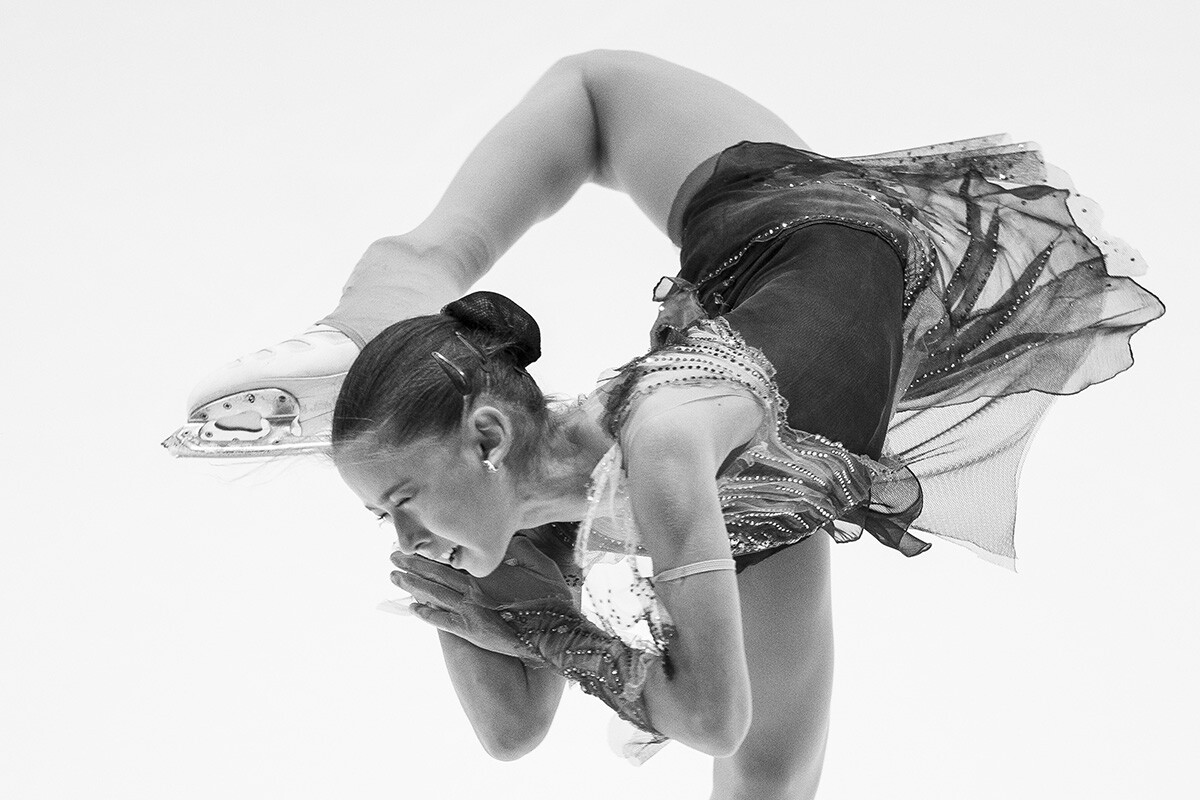 At the 2022 Olympics, Kamila set the Olympic record for points during In Memoriam. She also became the first figure skater to do a quadruple jump at the Games.

“I am very happy that today I was able to do two quadruple jumps and a triple axel. I couldn’t do the second toe, but I’ll work on it. It's such an incredible feeling, like you’re skating your first season in adult competition and there’s already a lot of talk about you,” Valieva said after the performance.

Hobby and the secret of success

Valiyeva is called a unique figure skater, due to her elasticity and jumping skills - she is also strong in ligatures, rotations and component scores. In an interview, Kamila said that the secret to her success is repeating her program every day, as well as her coach.

“She (Eteri Tutberidze - RB) is like this with me every practice, she knows every turn of the head, every stroke of the hand, it seems to me that she even knows how I breathe in the program, how I feel when I perform a particular element. And I’m not me anymore. I am her. Eteri feels and understands each routine and helps me understand, accept and feel every move,” Valieva explained. 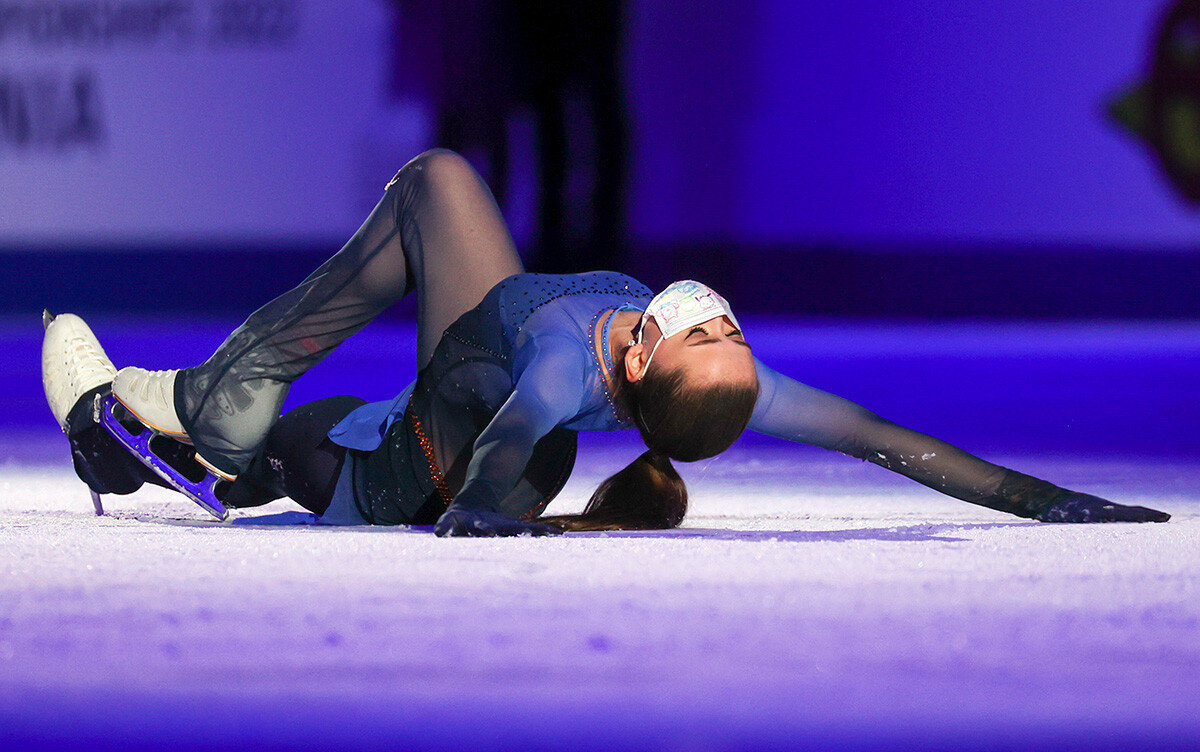 To distract herself from training, Kamila draws. “When I was little, I loved to draw,” Valiyeva recalled in an interview with TASS. - And I was good at it. Not exactly precisely and correctly, but for a six-year-old child, it was beautiful. Not “stick, stick, pickle” style doodles, but just a bit more upscale.

She also dreams of driving a car. Because of her age, the 15-year-old skater can’t yet get a driver’s license in Russia, so she goes go-karting for now. In addition, she takes care of her Spitz, Leva.

Of the plans for the future the champion, Kamila still has dreams of becoming a psychologist, as well as to win another gold medal at the Olympics. 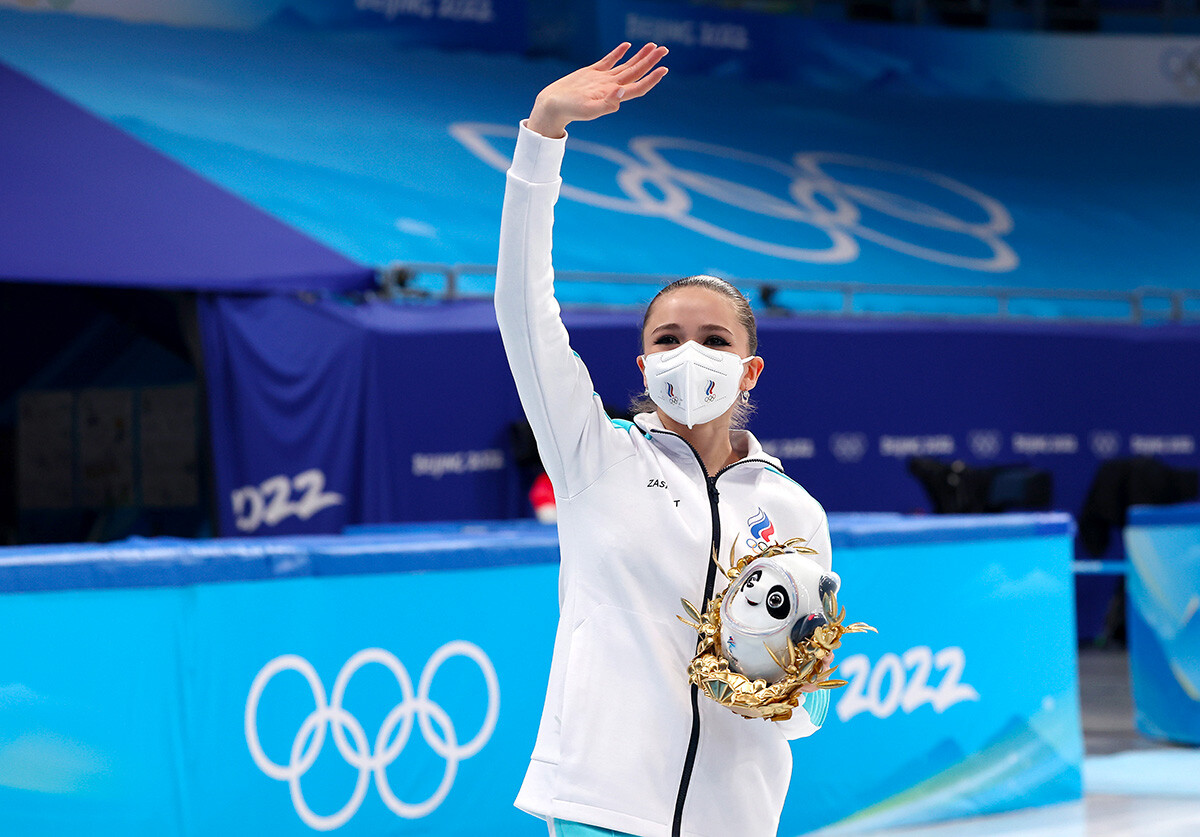 “It’s such a childhood dream, I’ve probably been telling my mom since I was three years old, ‘I want to be an Olympic champion!’ And now it came true. And from now on I’m going to work to make another dream of mine come true,” Valieva said.