Why do people in Russia live in places where it's -50°C in the winter? 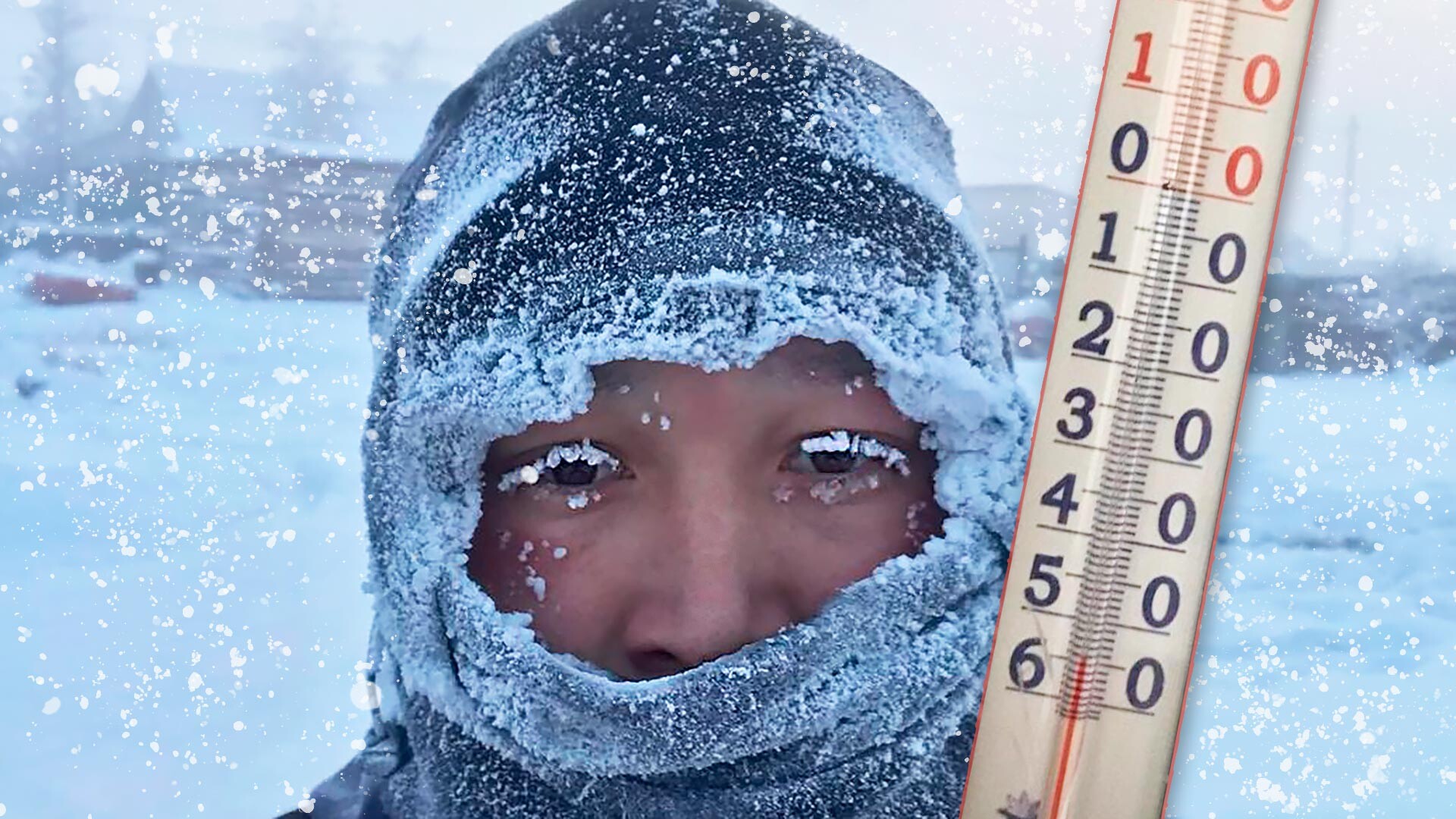 guardian_ykt
The Northern Lights, icebreakers and tough people with warm hearts. What compels people to live in remote towns deep in the north of Russia? 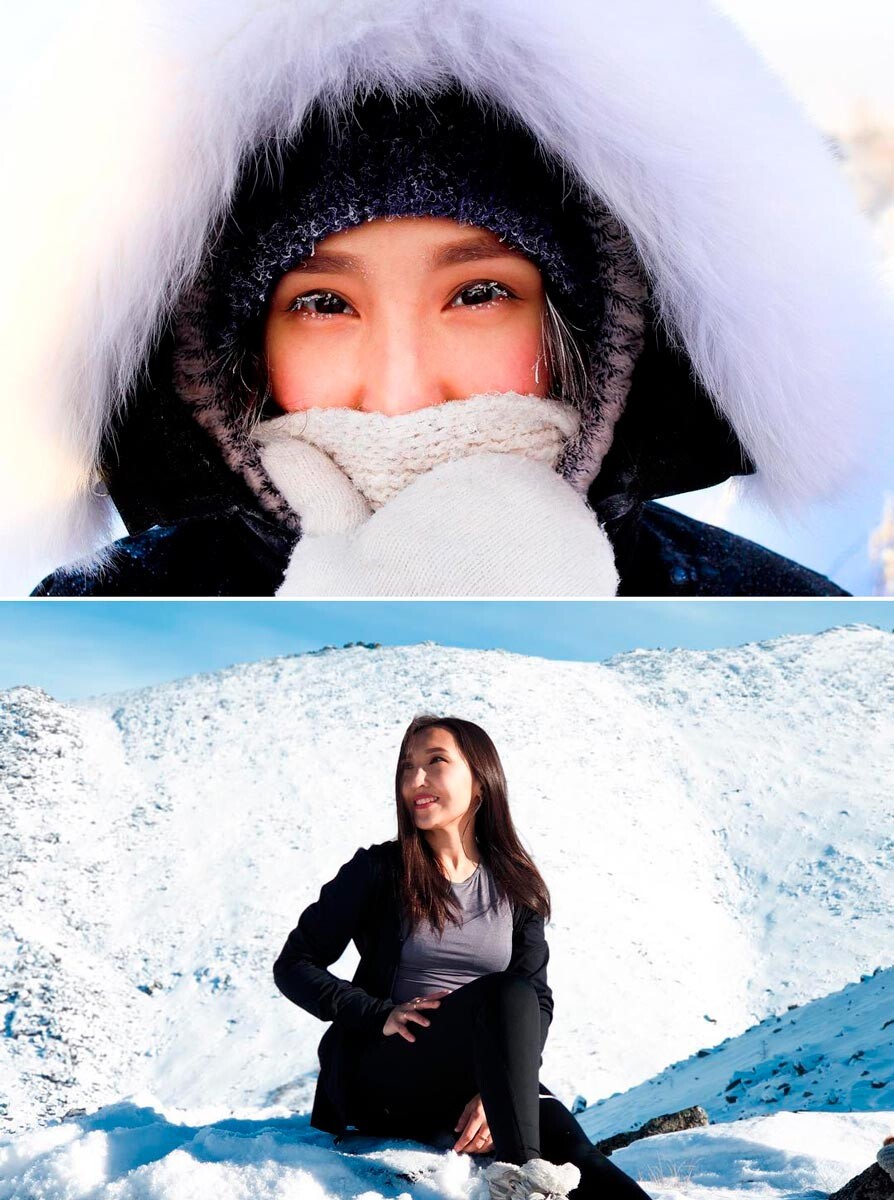 Tanika lives in Ust-Nera, a settlement with just over 4,000 inhabitants not far from Oymyakon, the coldest inhabited place on Earth, where temperatures in the winter regularly drop to -60°C. She was born in another part of Yakutia but moved here to be with her husband.

People living in such harsh climates say you get used to bone-chilling winters as a child. For instance, when the temperature drops below -52° C only primary school pupils can stay at home. For adults, cold weather is no excuse for not showing up at work.

"Yes, we do live in very extreme conditions: When it is -50°C or -60°C outside, you can't go out for a walk, and if you go on a long trip and the car stalls, you can freeze to death right there on the road."

On the other hand, in winter you can perform tricks like this:

"The countryside here is very beautiful and the people are kind, straightforward and caring," Tanika says. "In fact, today it was just -28°C and the sun came out. It's positively springlike!" 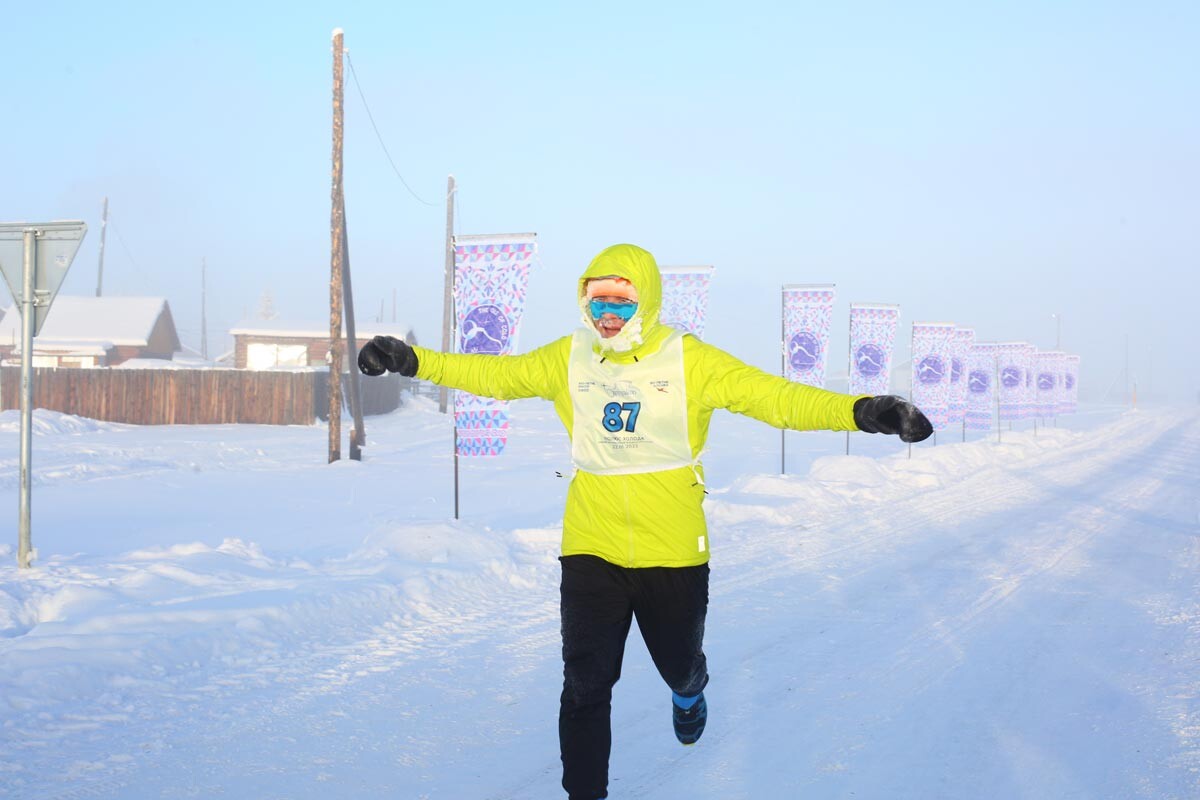 Yakutia is Russia's largest and coldest region. Implausible as it may sound, sports marathons take place even in freezing temperatures of -50°C here. Aleksei Pestryakov from Yakutsk, which with over 280,000 inhabitants is the largest permafrost city, is an amateur athlete who goes running in the winter. And the weather doesn't stop him or others like him.

"Some people like to run in the mountains, and I really enjoy running in extremely low temperatures," he laughs. "For us locals, a temperature of -50°C is quite normal. Perhaps the mere fact of being born here gives us immunity and frost resistance."

The main thing, he believes, is to dress in multiple layers, and then you'll stay warm.

“You need high fur boots and a down-padded jacket on top." 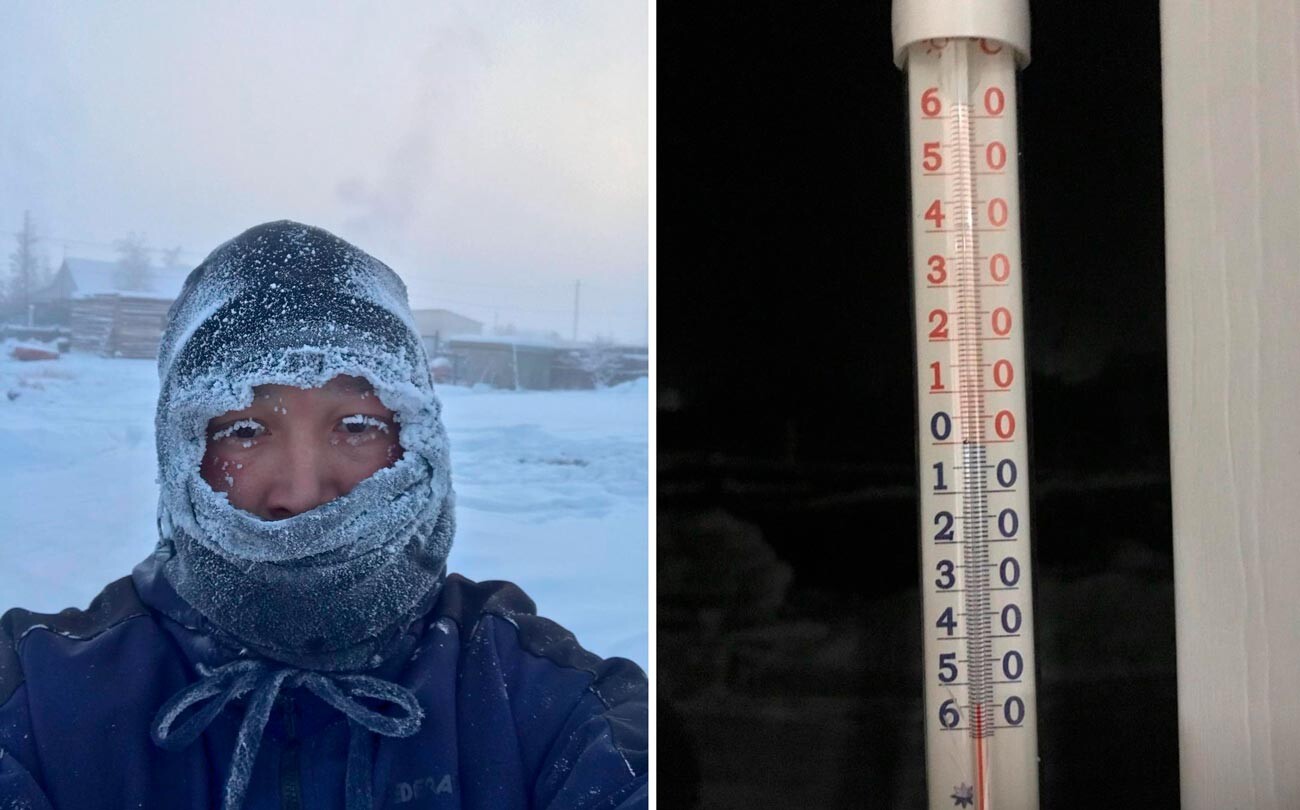 In January, Aleksei took part in a marathon at the Pole of Cold in Oymyakon, which was held for the 3rd time.

"I went there well prepared and properly kitted out and was ready to run even ат -60°C."

That said, he does admit that he sometimes gets fed up with the frost and wants to go somewhere warm for a while.

"Last year it was -60°C for a whole month, and it wasn't very pleasant. This year it's been better—at most the temperature has gone down to -54°C."

"I can see an icebreaker outside my window!" 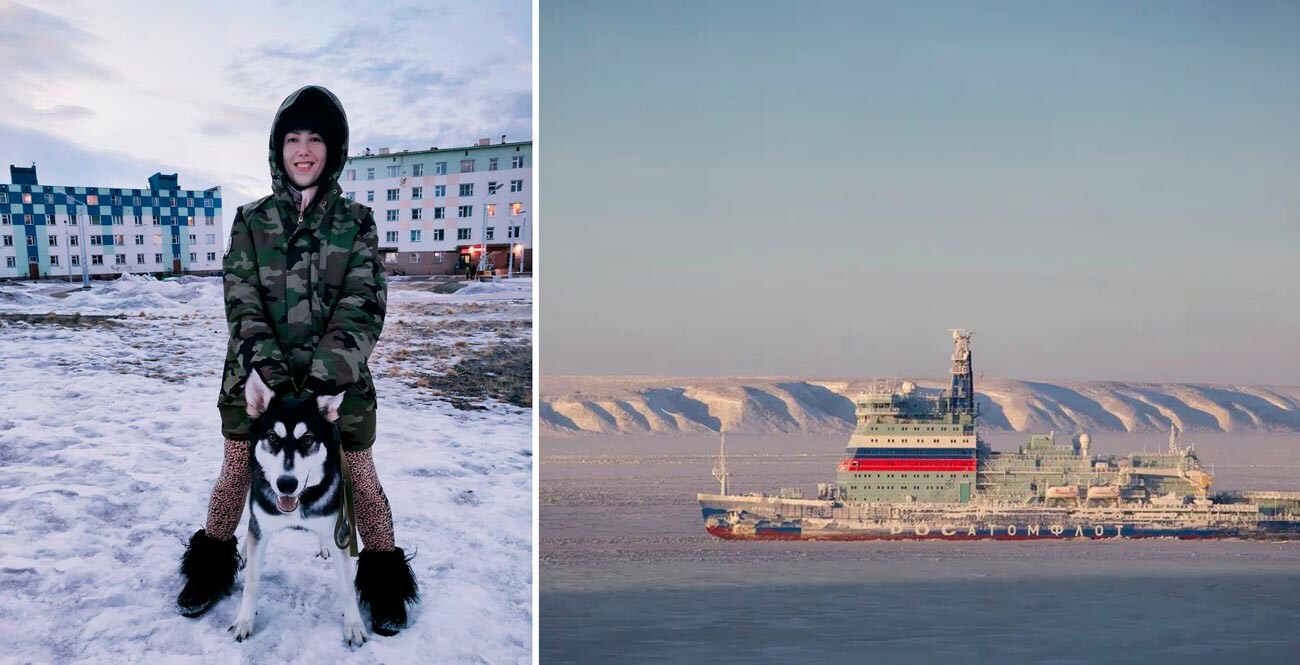 Pevek, the northernmost town in Russia, is located on the shores of the strait of the same name. In addition to the freezing and protracted winters, local residents have to put up with the added bonus of the "Yuzhak," a very strong southeasterly Arctic wind that quite literally blows you off your feet.

Around 4,500 people live here today, although before the collapse of the Soviet Union that number was closer to 12,000. Its residents mainly work at gold extraction enterprises.

"How pleasant it is to wake up in the morning, to go and look out of the window and, wow, see an icebreaker!” says Yekaterina Volobuyeva. “It brings variety to our polar night and is a happy sight during our winter hibernation."

She got used to the local weather when she was young and barely blinks at it anymore.

"When the Yuzhak is blowing, we just stock up on food and sit it out until the weather improves."

She says it used to be much colder and that changes in the climate is something you just have to get used to.

Life in Chukotka is quite unique, of course.

"Getting to work takes 15-20 minutes on foot, and I have free time to myself when I can walk in the tundra or along the seashore with my dog. It's very soothing," Yekaterina says.

People in the north also have a way of thinking that is quite different from the inhabitants of big cities. Yekaterina describes it as “austere people with a warm heart."

"A cozy town amid volcanic hills.” 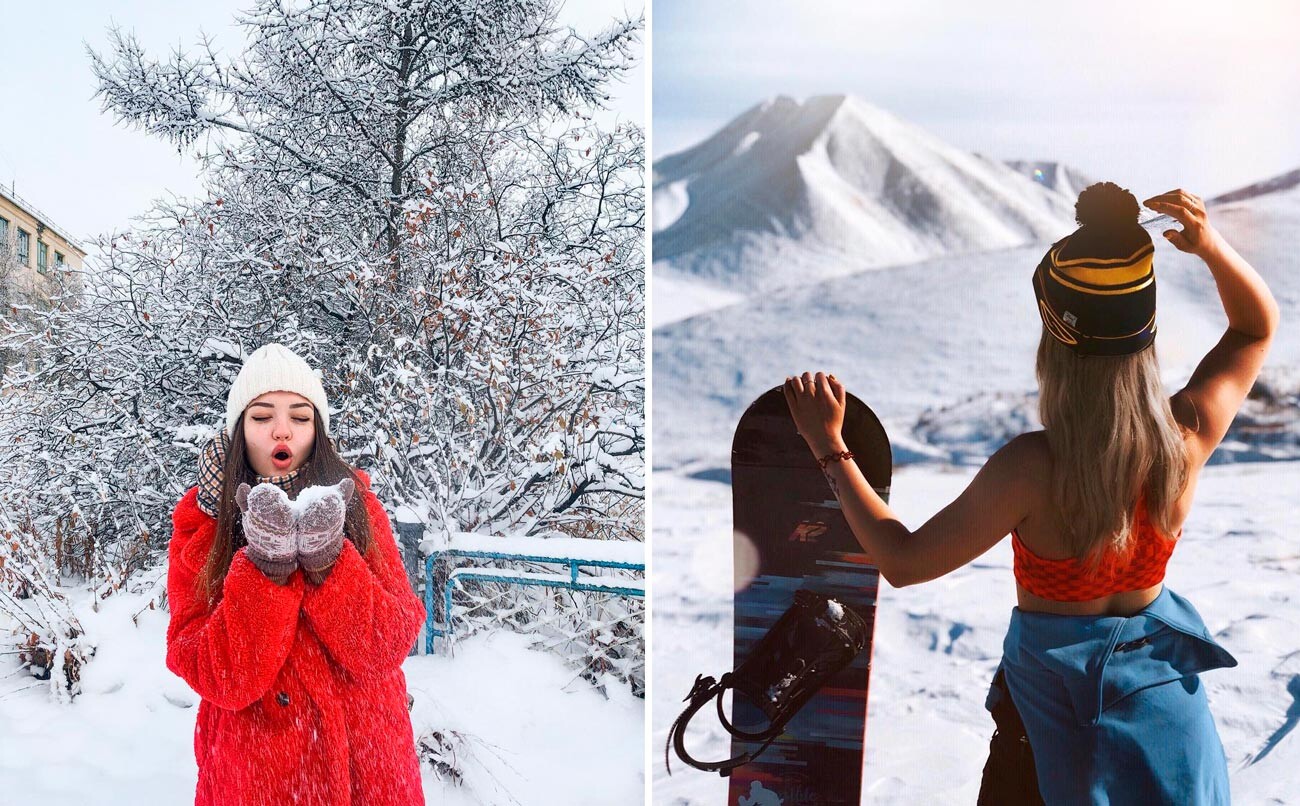 From here, it is 6,500 km to Moscow and 650 km to Anadyr. And all around is tundra with only a number of small settlements. What’s more, Bilibino is one of Russia's most expensive towns. Food can only be flown in by air, and because of the harsh weather conditions air shipments are not possible every day. For this reason, ordinary cabbage or carrots cost 4-5 times more than in the central part of the country, and bread and meat are twice as expensive.

In Soviet times, Bilibino was a center of gold extraction and people used to come here from all over the country to make "big money" and enjoy the benefits and allowances that came from living far in the north. In its glory days, more than 15,000 people lived in Bilibino, while today there are around a third as many residents. Life is fairly difficult, not just because of the Arctic climate but also because of how far the town is from civilization. Nevertheless, it is a young town where the average age of its inhabitants is 33.

"I've lived in Bilibino for almost 10 years now," says 24-year-old Marina Tolmacheva. "My father was relocated here for work. And after school I met my husband and decided to settle here."

Marina opened a cafe that serves burgers, wraps and pizza. She describes life in the northern town in her blog.

"Bilibino is a cozy little town. It is set amid volcanic hills, and we are not troubled by high winds. And the countryside is very beautiful!" she says. "When there is a severe frost you can actually see it—it's like a thick fog. You can observe the Northern Lights from here too."