How cold does it have to get for Russians to freeze? 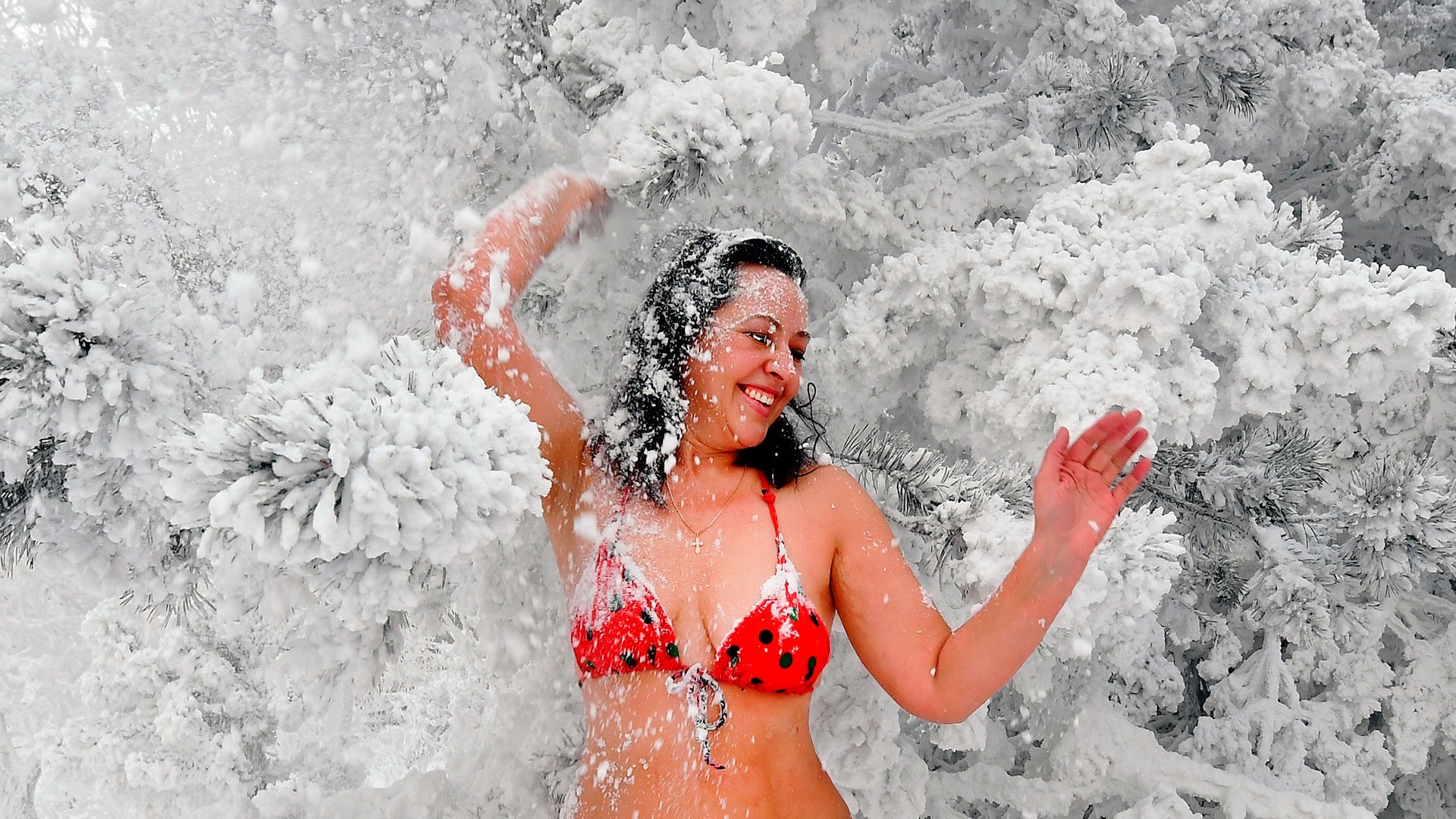 Ilya Naimushin/Sputnik
Is it possible to enjoy life when the temperature outside is 50°C below zero? Sure it is, Russians say, especially if it was minus 60°C just the day before!

Russia is widely associated with snow and the cold, and many people assume Russians are so hardy that they happily eat ice cream outdoors even when it is freezing cold. But is it really true that Russians are not afraid of cold weather? We decided to find out from residents in different parts of the country how they define cold weather.

Siberian frosts are the most severe 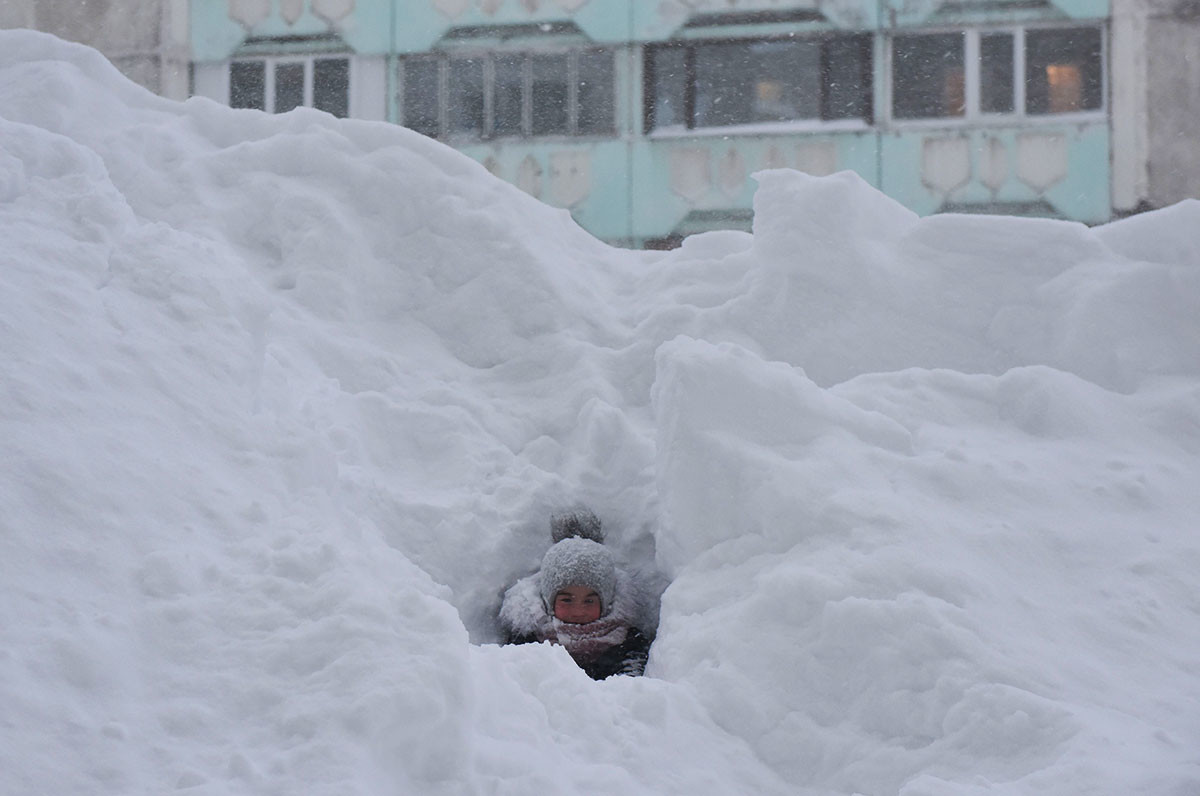 A kid plays in Norilsk.

Russia's coldest cities - Oymyakon, Verkhoyansk, Vorkuta and Norilsk for example - are located in Siberia and the Far East, where frosts of 40°C below zero are commonplace. The winter weather begins in October and lasts until May, and not all the snow melts even during the summer. What’s more, different areas have their own unique weather characteristics. For example, in Norilsk the winters are harsh not so much because of the low temperatures but because of winds that are so crazy and strong that they can literally knock you down.

“We have a relatively dry climate, so I consider it cold when the temperature drops to 30-35°C below zero (provided there is no wind). When the temperature is 45°C below zero or lower, that is freezing weather, which is usually accompanied by a fog,” says Yana Leusheva, a photographer from Norilsk. “Wind chill feels like 60°C below zero. Sometimes when the air temperature is just minus 25°C but there is a northern wind, you get chilled to the bone. We try to keep warm by putting on thermal underwear and warm overalls and, if possible, staying at home." Yana notes that at temperatures lower than 45°C below zero, schoolchildren aged seven to 15 are exempt from going to school, but this does not apply to high school students. 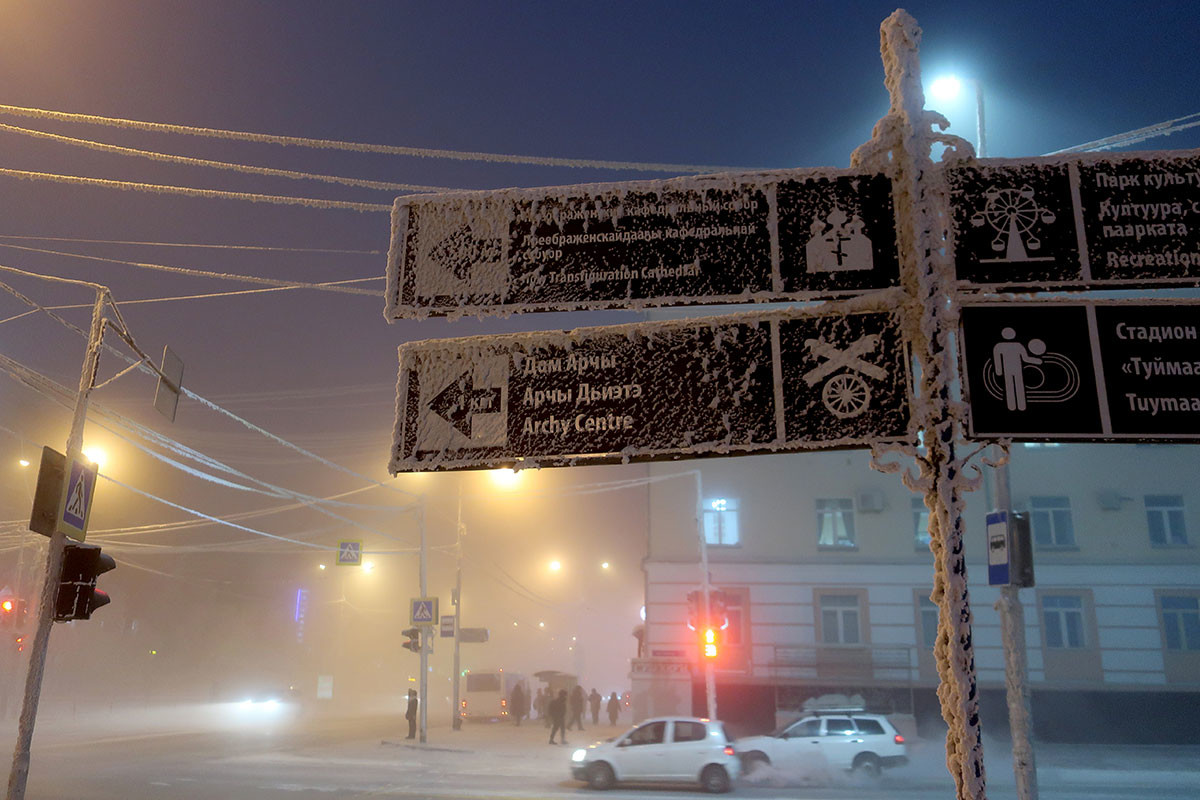 This is how the biggest city of Yakutia, Yakutsk, looks like when the temperature outside is minus 50.

“When the air temperature here rises to 50°C below zero, people say that it has become warmer, while it is considered cold when temperatures drop to below minus 60°C,” says Ilgen Argystakhov, a blogger from Oymyakon in Yakutia, which is the coldest permanently inhabited place on earth. It was here that the coldest ever temperature - minus 67.7°C - was recorded in 1933. “Our winters are cold, but some years there are more warm days in them, sometimes it even warms up to minus 40°C. But invariably every year we get temperatures of minus 60°C. If I'm not mistaken, at minus 56°C schoolchildren are allowed not to go to classes. But adults work in any weather. We just try to dress warm so we don't get cold,” Ilgen says.

In the south of Siberia, winters are much warmer - by northern standards anyway. “Usually in winter we have temperatures of 20°C to 40°C below zero,” says Marina Krylova from the city of Kemerovo. “In recent years, about minus 20°C during the day. There is a lot of snow, it is usually cloudy, dry and windy. I get cold at temperatures below minus 30°C. At minus 30°C, almost everyone goes to school, and everyone always goes to work as usual. You just put on a warmer sweater and off you go.”

On the Black Sea it is cold and without snow 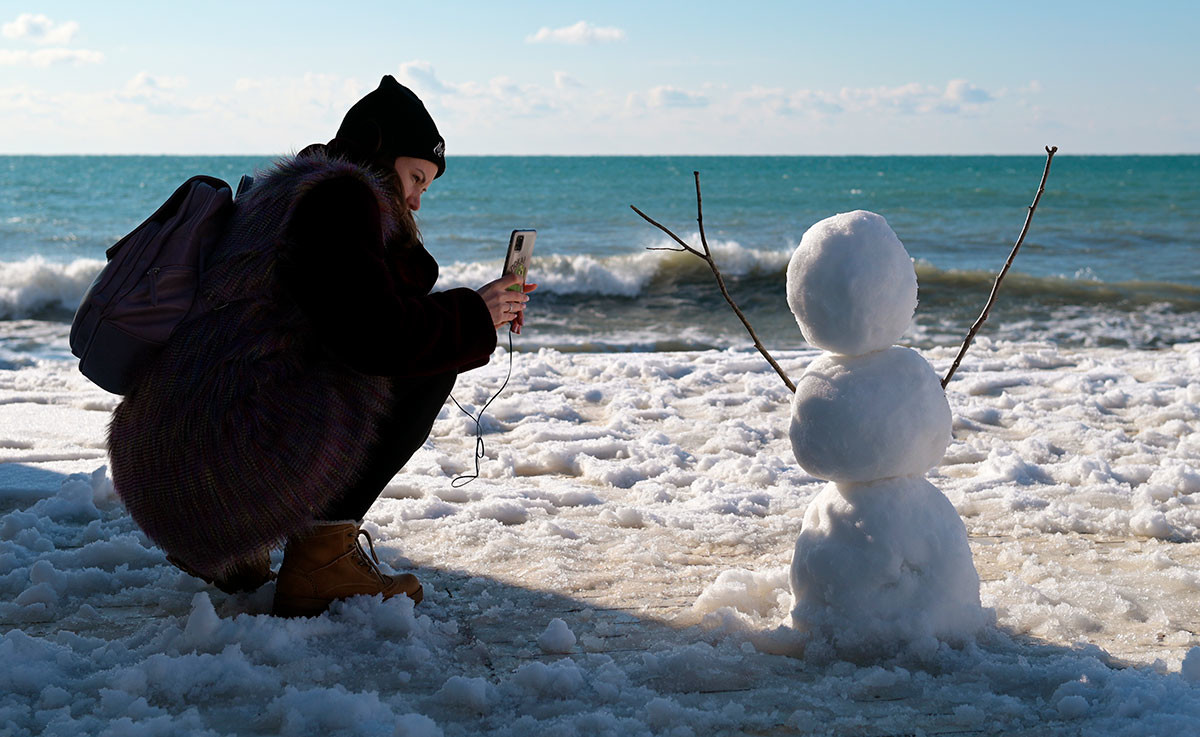 The climate in Russia is actually very diverse. Residents in southern cities do not see snow often, and so when they do this unusual weather becomes the stuff of news reports. For example, this January it snowed in Sochi for the first time in five years, and social media was instantly filled with pictures of icy palms and snowmen on the beach. Usually local residents have an entirely different problem to deal with: cold winds coming from the sea, which are difficult to hide from.

“I feel uncomfortable at minus 3-5°C and cold at minus 6°C, especially when it is windy,” says Alexandra Matviychenko from Sochi. “But the weather here changes so quickly! Today it is minus 3°C and I am wearing a fur coat, but just a week ago it was plus 14°C and I was exercising outdoors in a T-shirt." Alexandra says that during the winter she wears an autumn jacket more often than a winter coat because winters in Sochi are mild and quite comfortable. “To tell you the truth, I now know how much I enjoy winters in Sochi. This year this is the first week when the air temperature is below zero and there is snow. I haven't seen snow in Sochi for a long time!” 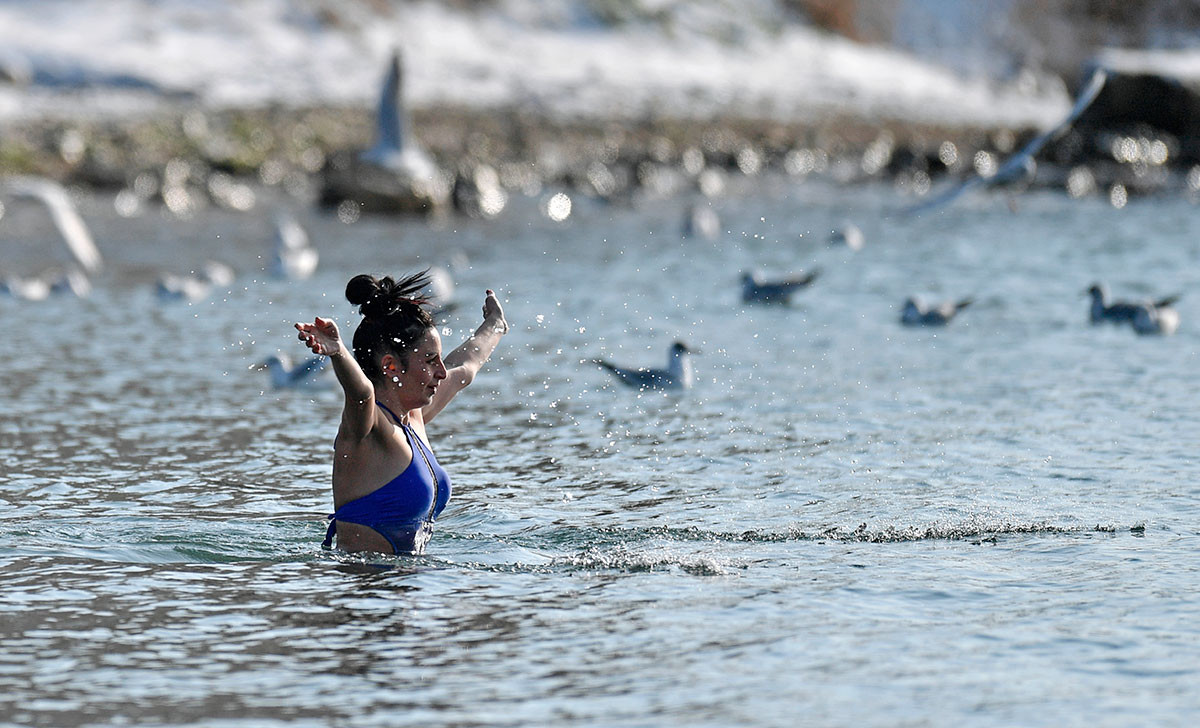 A real winter came to Crimea this year too. “This year's winter is snowy. It has been a long time since we had snow remaining on the ground for three days. Usually when it snows the snow melts within two hours and the temperature rarely drops below zero,” says Rimma Zaytseva from Sevastopol, adding that the most unpleasant thing is a biting wind. “The other day it was minus 4°C and windy, and it felt like minus 14°C. Usually January and February are particularly windy and the sea is stormy.” Rimma says that she lived in the Urals for a long time, so Sevastopol-style frosts do not frighten her at all, although she did note that people in Crimea still wear fur coats and warm down-padded coats and make sure to dress their children very warmly.

The main thing is humidity 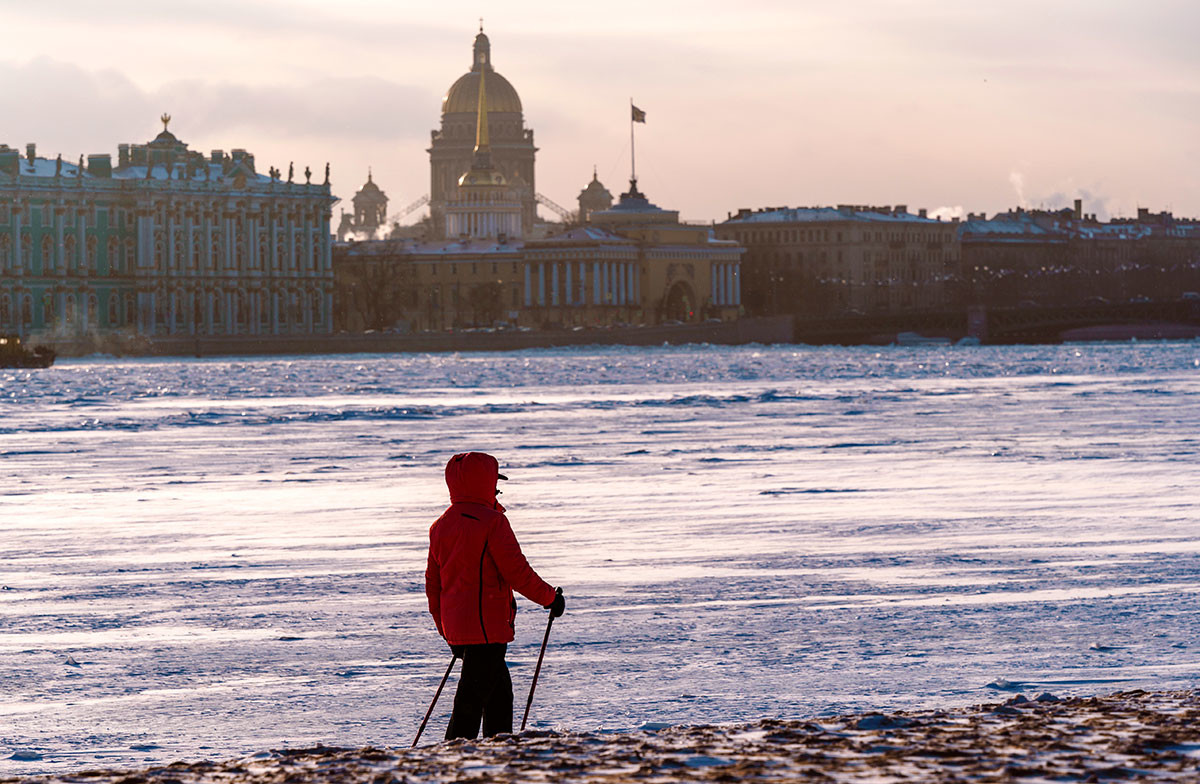 Neat the Peter and Paul fortress in St. Petersburg.

Many Russians say that cold weather is much easier to cope with when it is dry and sunny than when it is damp. “When the temperature is below zero and there is wind, it is terrible! Even minus 5°C feels like minus 100,” says Valentina Pakhomova from St. Petersburg, a city known for its endless rains. Winters here are often dank, and the streets are covered with sleet is nearly impossible to avoid. 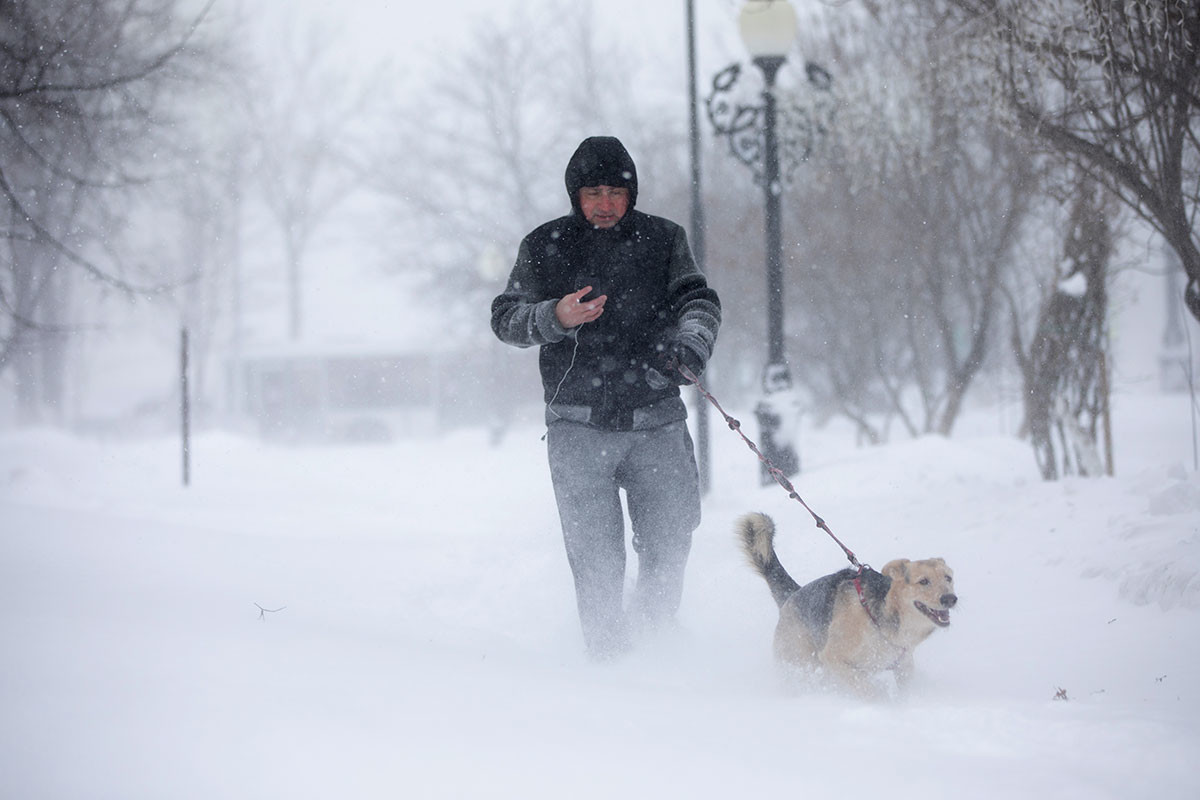 “Even though I was born on Sakhalin, I don't like cold weather, and I feel cold when the temperature gets below minus 10°C,” says Yevgeny Kiriyenko from Yuzhno-Sakhalinsk. The weather on the island is very diverse. In the south, winter temperatures are usually around 15°C below zero, it is damp but there are no strong winds, whereas in the north, just 300-400 km away, it can get down to 40°C below zero. “I once was in Vladivostok for a week,” Yevgeny recalls. “The temperature there was minus 12°C, and it was very windy. And although it was sunny, I felt twice as cold as on Sakhalin. And in Khabarovsk it was twice as cold as in Vladivostok because of the wind.”

In Moscow, the winter temperatures usually do not go below minus 20°C, and the city center is warmer than the outskirts as a general rule. But it does sometimes get very snowy and windy, with heavy snowstorms that cover the roads in snow and a biting damp wind. “It usually gets really cold at temperatures below minus 15°C,” says Daria Sokolova from Moscow. “But I will go out for a walk in any weather.” 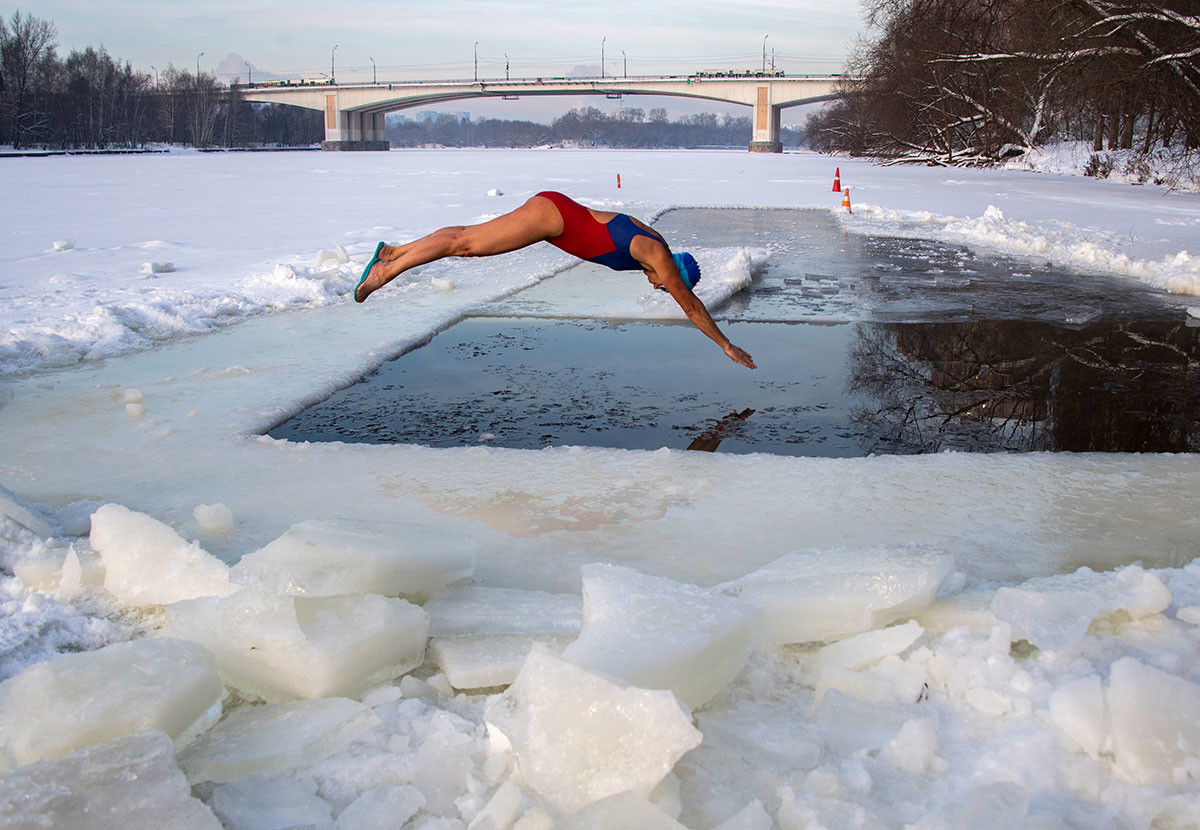 Diving into an ice hole in Moscow.

In order to avoid getting too cold and learn to enjoy the winter, some Russians practice cold exposure. “I used to react badly to frosts of more than 20°C below zero,” says Ilya Potapov, a member of the Pavloposad Cold Plunge community in the Moscow Region. “In 2012, I began taking a cold plunge on Epiphany, and in 2016 I began to practice cold exposure. After the first year of cold exposure training, I found it easier to enter cold water and in general to endure the cold.” He adds that he is now able to withstand just about any temperature outside or in the water. “I don't get cold at all. It is minus 12°C now, and I am wearing summer shoes. But in general, of course, I wear winter clothes, because one should keep one's head and feet warm,” Ilya says.