How Russians use poisonous fly agarics for beauty and wellness 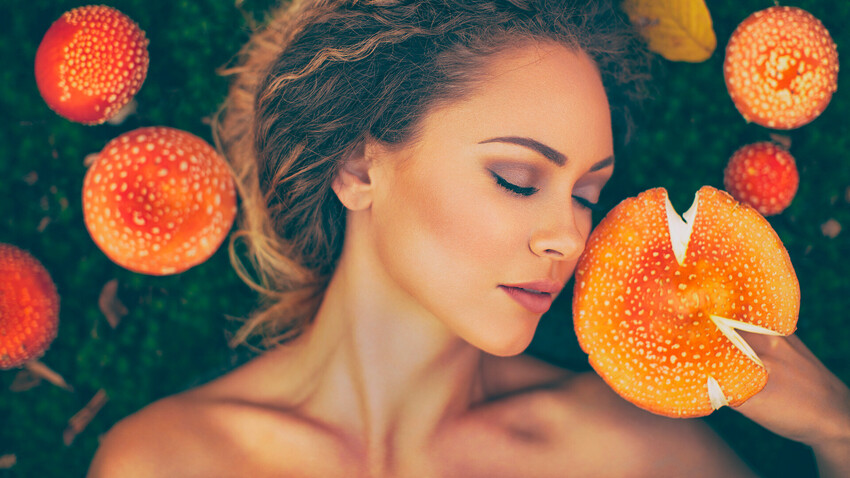 Is fly agaric cream a scary nightmare or a successful commercial move?

Miljko/Getty Images
The trend for eternal youth has prompted technologists and even mycophobes to pay attention to cosmetics that use mushrooms.

Manufacturers of cosmetics have learned to make creams and ointments from almost all available natural ingredients, including mushroom extracts. Hardly anyone would be surprised to find chanterelles (they moisturize the skin), oyster mushrooms (improve complexion) or shiitake mushrooms (help remove pigment spots) in a cream. But there is a nuance - they are all edible. However, not everyone dares to put a fly agaric or grebes on themselves, and, as it turns out - there is something to this. While some grebes can slow the aging process, the mushroom parasite chaga is able not only to destroy the tree on which it grows, but also has sedative properties. 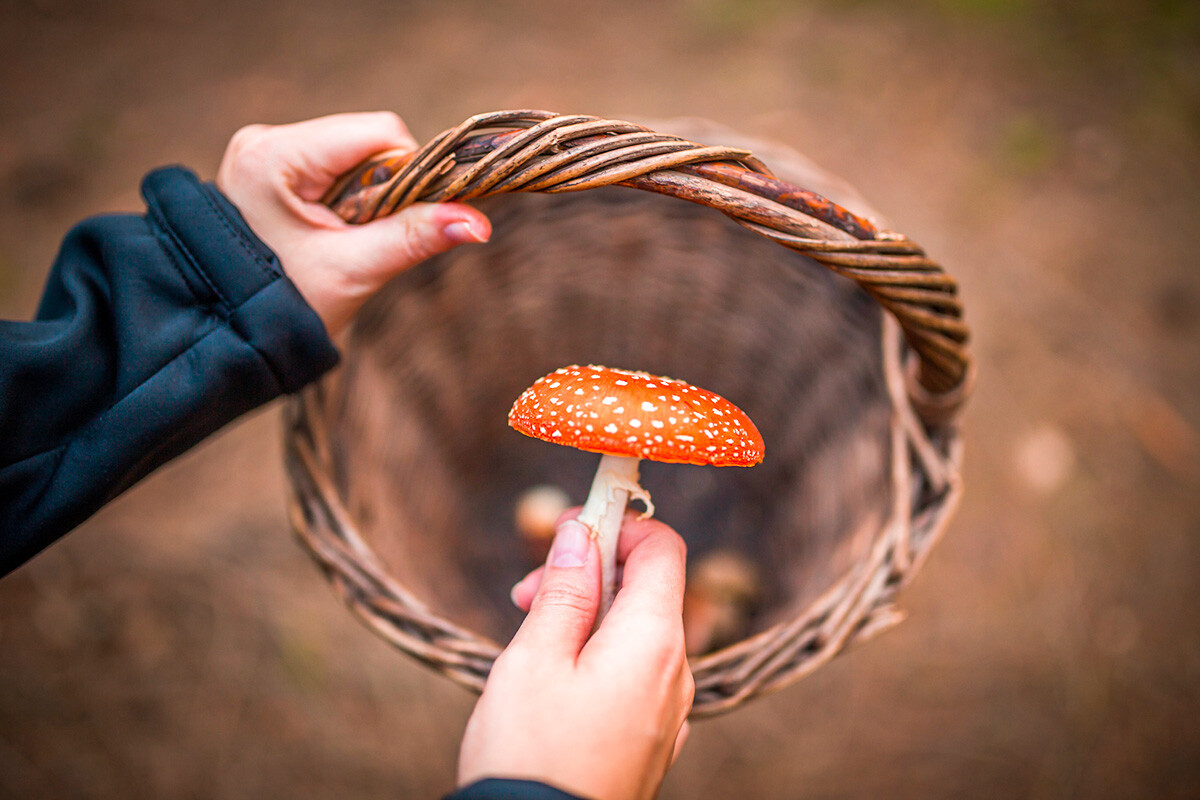 Fly agaric is a treasure trove of useful substances, which promises to moisturize the skin and smooth out wrinkles. Scientists explain the benefits of mushrooms by their composition of biologically active polysaccharides, which are responsible for moisturizing the skin and accelerating the process of regeneration.

"Throughout the European part of Russia, the red fly agaric has been traditionally used for centuries not only to make a liquid to kill flies, but also as a medicinal mushroom," writes well-known mycologist Mikhail Vishnevsky in his book ‘His Majesty the Fly Agaric.’ 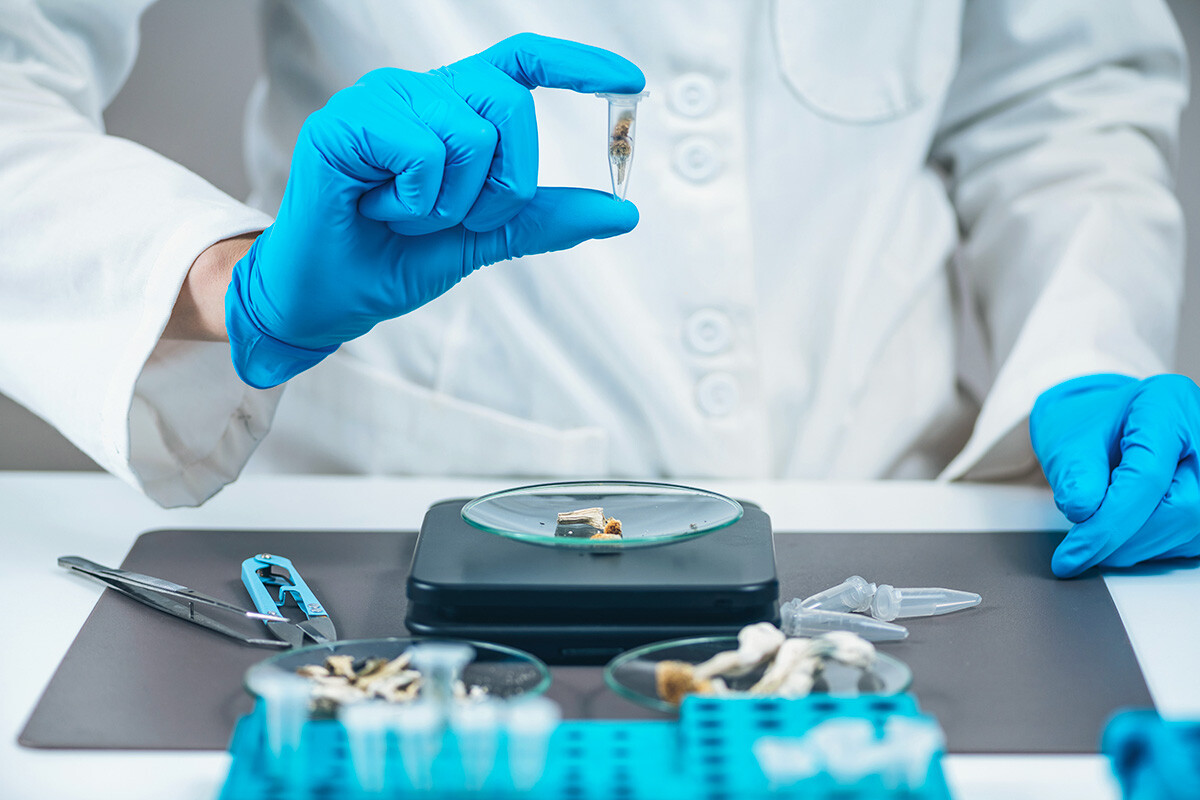 "Infusions and compresses from this mushroom help in healing wounds, bruises, rheumatism, stomach diseases, diseases of the nervous system, tumors of the glands, tuberculosis and a host of other diseases. The results of biochemical experiments have shown that the skin cap of the red fly agaric contains an antibiotic substance muscarufin - a fiery orange pigment that inhibits the development of tumors*. The mushroom pulp also has valuable therapeutic properties", said Vishnevsky. 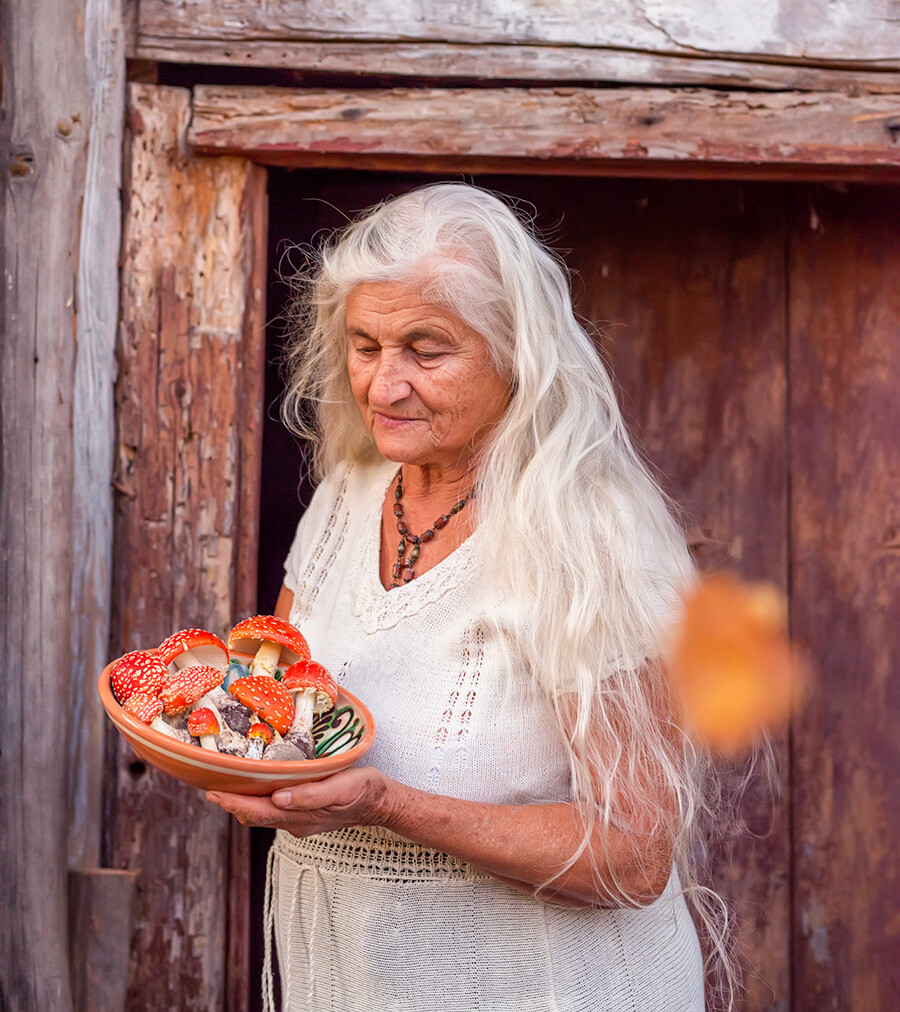 In ancient times, shamans of western Siberia ate poisonous mushrooms raw or made infusions from them for their occult purposes. This was not popular, but mushrooms were widely used to create traps and catch flies, bedbugs and other insects - that's how the mushroom got its name in Russian - mukhomor, whichconsists of two words: mor - "pestilence" and mukha - "fly").

Since the 19th century, the external use of these poisonous mushrooms spread throughout the country. Fly agaric extract in linseed oil was used as rubbing cream for the treatment of patients with rheumatism. In the Moscow Region, people made salt tincture of fly agaric, in St. Petersburg they rubbed swollen joints with half-rotten mushrooms caps to redness. 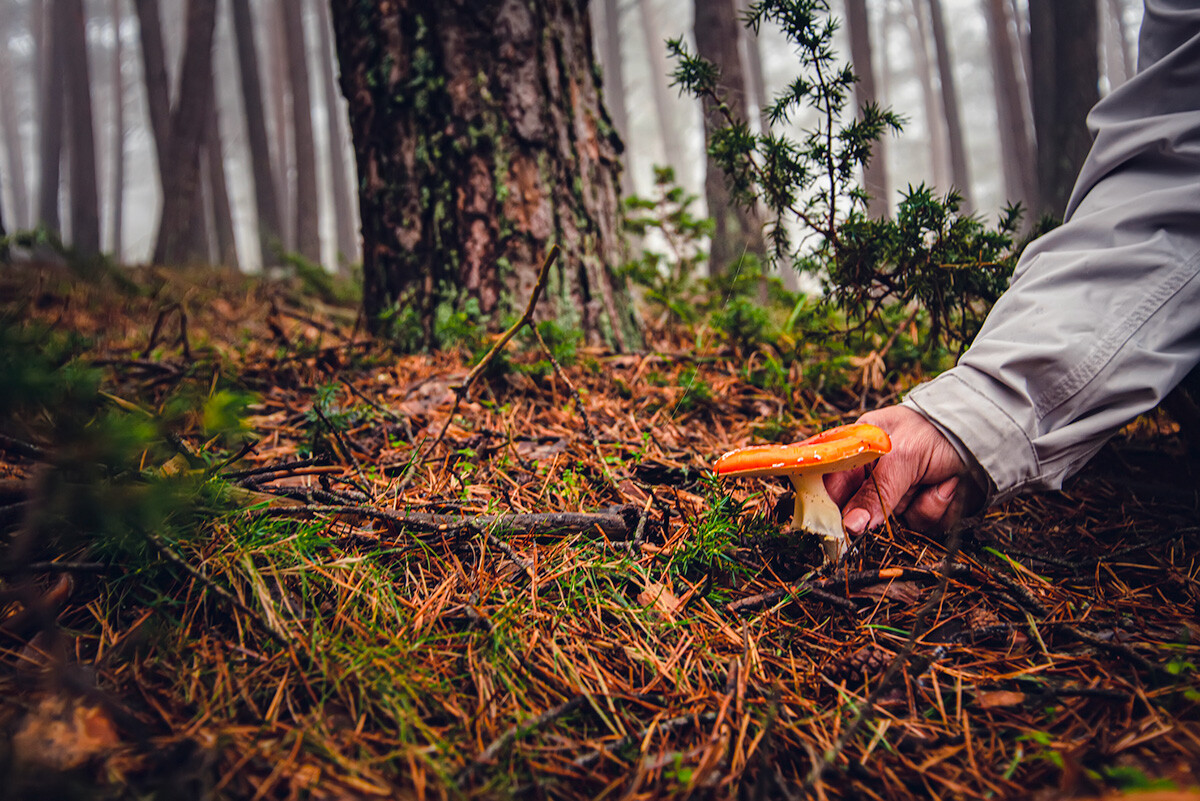 Tincture of fly agaric mushrooms was also prepared in vodka - as a treatment for tuberculosis, nervous system diseases, cancer - it was used internally. However, any experiments with application of tinctures of poisonous mushrooms are dangerous to health and life, so not all patients survived such treatment.

Other mushrooms were used as well: juice of milky mushrooms and chaga tincture treated skin diseases, tincture of trutovik gave a beautiful shine to hair.

In 2015, Evgeny Fedorov and Victoria Shevchenko opened the Bizoryuk family factory in Krasnodar to produce cosmetics from plant and natural components, including fly agarics. Raw materials for cosmetics are supplied from the Krasnodar Region and the North Caucasus. 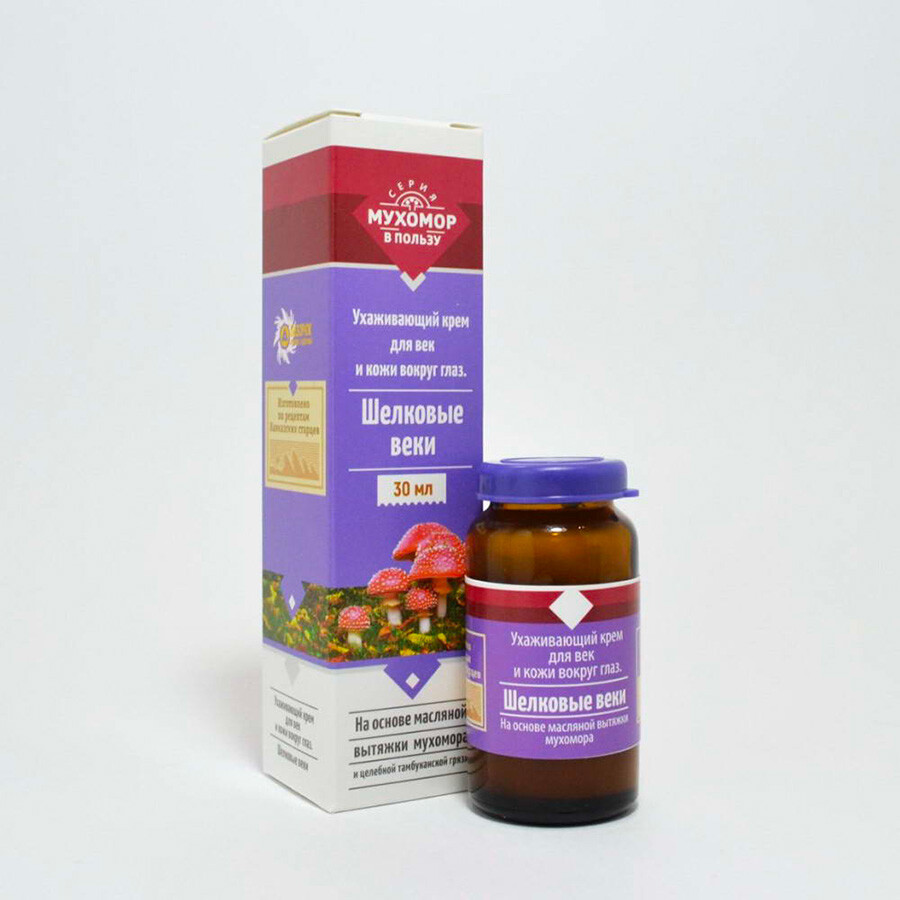 Face cream with fly agaric promises to moisturize, regenerate the skin, reduce wrinkles and alleviate inflammation. The cost of this promising tool is quite modest - a bottle of 30 ml. costs 300 rubles (about $ 4.5). In addition to oil extracts from fly agaric, the cream contains hyaluronic acid, coconut oil and a dozen other oils and other useful ingredients that certainly will not harm the skin. Fly agaric cream is also made for feet - to treat varicose veins and edema, as well as ointments for the joints. The products, according to the manufacturers, have proven to be in demand.

The couple are not the only ones promoting the medicinal properties of fly agarics in Russia. The company "Erilem" from Novosibirsk has developed an anti-aging line - "Mukhomor Against”. It includes a dozen creams for the face, hands and feet. For example, a cream oil for heels against cracking and dryness promises to soften the skin of the feet and protect against mycobacteria. In addition to the fly agaric extract, it contains the oil of edible mushrooms of redroot. According to the manufacturer, it has "emollient effect, superior to that of peach," and the infusion of fungi chaga and willow bark in the cream reduces sweating. Mushroom extracts are accompanied by cowberry juice, plantain and aloe juice, sea salt, AHA acids and silver citrate - the union of traditional medicine and technology in a single tube. 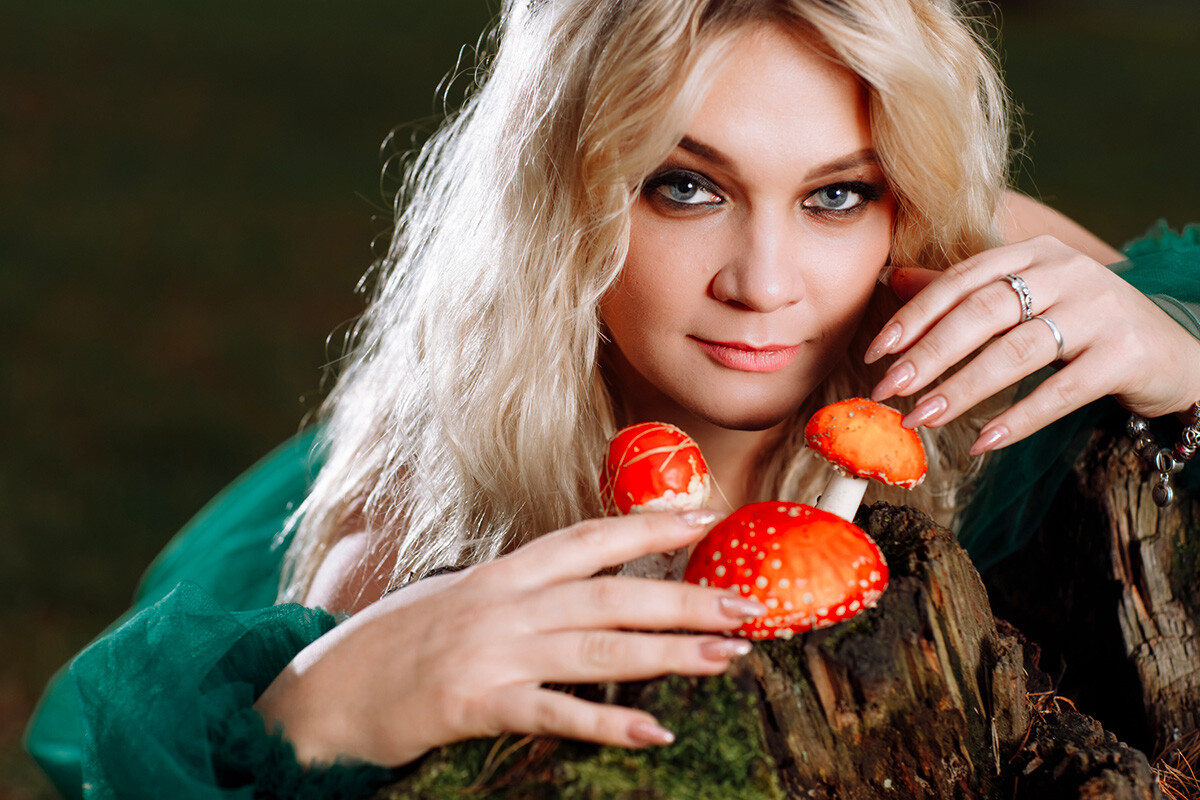 You'd think that using fly agarics at home would be a thing of the past, but it's not. Grandmothers in villages, still going for mushrooms, take with them an extra bag for fly agarics. They soak “the valuable material” for a few days in alcohol or vodka, and the resulting tincture can be rubbed on the joints.

In the markets fly agarics are sold by weight. And in the woods near Moscow, in the season, there are ads for the purchase of fly agaric caps. However, it is not known whether they are subsequently used for medicinal purposes.

On the Internet you can find videos that show how to make a fly agaric mask or ointment, but do not repeat it at home. Sensitive skin can suffer from an allergic reaction or more serious damage. In industrial production, the mushrooms are purified, and the required amount of material in the cream is strictly monitored.

*Official medicine allows only external use of tinctures and ointments from fly agaric mushrooms.