5 most unusual Russian bath houses: In space and under water 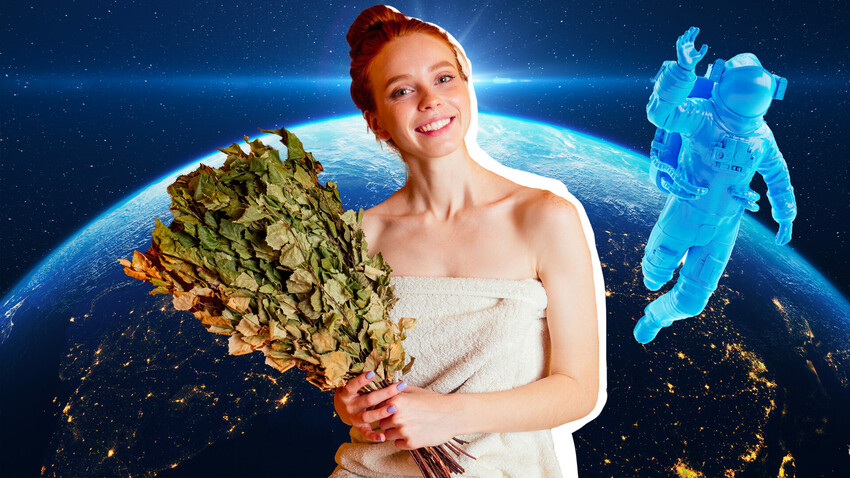 Russia Beyond (Photo: Legion Media; EyeEm, Science Photo Library/Getty Images)
For Russians, life is not complete without the ritual of the banya (steam bath), which is why, for a long time now, they have been taking their banyas with them - even into space and underwater!

Before the invention of the space banya, cosmonauts had been forced to use wet towels, but this only partly solved the problem of hygiene in space. In the 1960s, inventor and engineer Alexander Massarsky, head of a university student design bureau, designed a portable heat cubicle dubbed “bath house in a suitcase” and it was decided to adapt it for use on space stations. 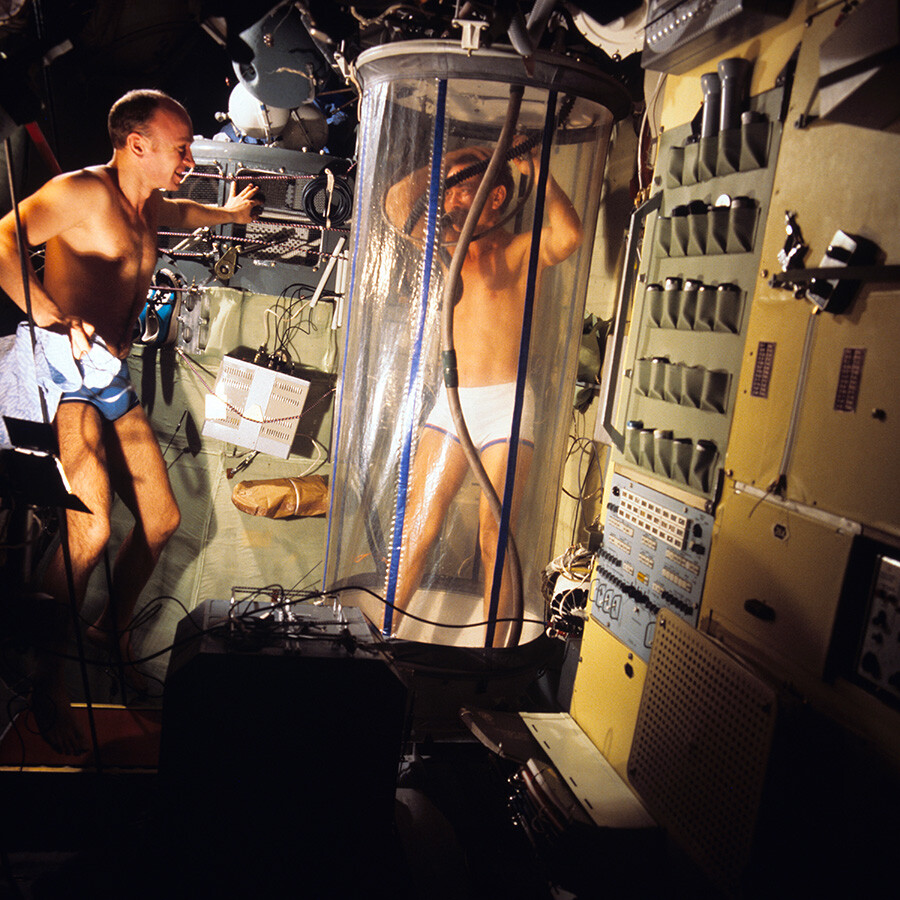 To organize a banya day, cosmonauts lowered a “cubicle” from the “ceiling” to the “floor”. It was made of polyethylene film with a zipper in the middle. A cosmonaut would climb inside and hot water was supplied to the “cubicle” using a spray nozzle. Water was then sucked out from below using the principle of the vacuum cleaner.

“Our sauna operated on the ‘Salyut-6’, ‘Salyut-7’ and ‘Mir’ space stations, then it was dumped at sea, together with the ‘Mir’ station and, since then, this type of sauna hasn't been used in space anymore," Massarsky told TASS news agency in an interview.

The bathing facility on the ‘Mir’ orbital station was a large airtight cylindrical cubicle inside which steam was generated requiring a large amount of water. The imitation of a real banya was so successful that the cosmonauts could even use veniks (bundles of leafy twigs traditionally used in a Russian banya). 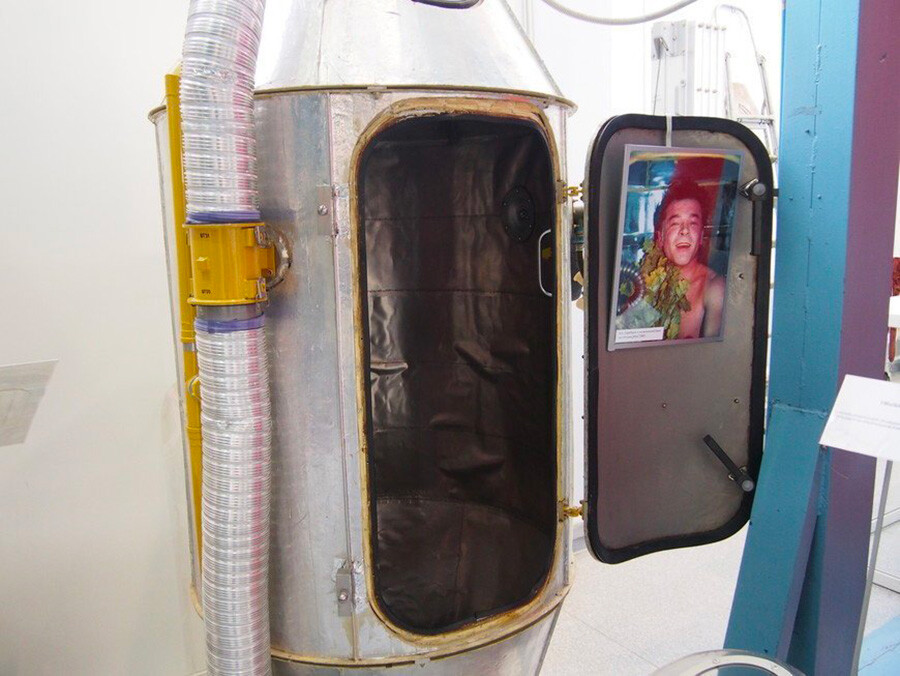 It appears that, in some ways, space technology has taken a step back: The present-day ISS (International Space Station) does not have and has no intention of having even a shower, so today’s space explorers have only wet wipes at their disposal.

The first underwater banyas were installed on board the Arkhangelsk and Severstal heavy ballistic missile submarine cruisers (Project 941 ‘Akula’; or ‘Typhoon-class’ according to NATO classification). The ‘Akula’ is the largest submarine ever built and because of its comfortable living conditions, navy personnel dub them “floating Hiltons”. In addition to a sauna, they have a swimming pool measuring 4 x 2 meters and two meters deep, as well as a solarium and a gym. 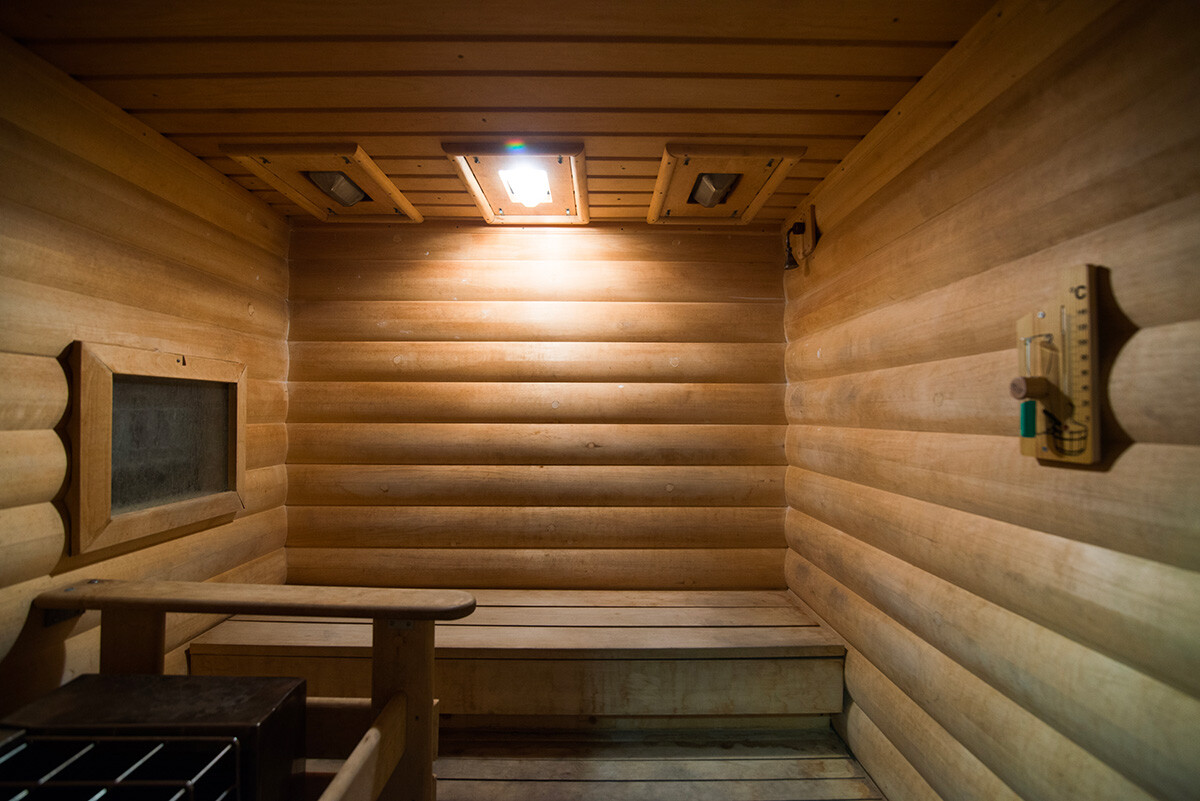 Borei-class strategic submarine missile carriers also have banyas. “The banya on [this class of] missile carrier is designed to accommodate 3-4 people. It is lined with aspen wood because, under the stresses experienced by the hull of the submarine, softwood paneling would quickly disintegrate, while aspen can withstand heavy strains,” Vitaly Bukovsky, head of the furniture workshop at the Sevmash defense plant, the largest shipyard in Russia, said in a TASS interview. 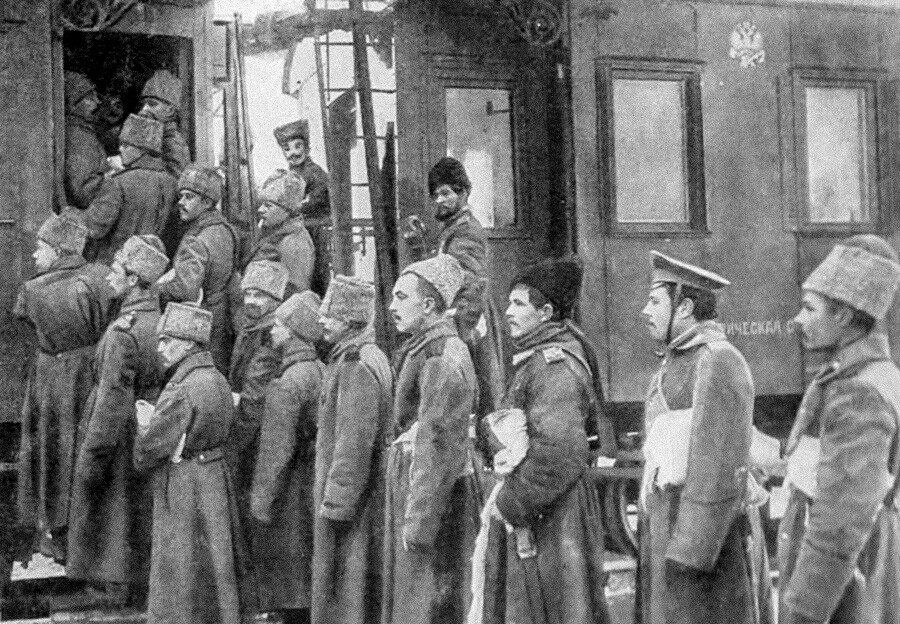 A queque into banya aboard a train

The first banya train was assembled in Russia in 1904 for the needs of the Red Cross. It consisted of four carriages: Laundries with manually-operated washing machines and disinfection rooms to ensure hygiene standards in field conditions. During the Russo-Japanese War of 1904-1905, a mobile banya of this kind serviced military hospitals and infirmaries in the Far East. 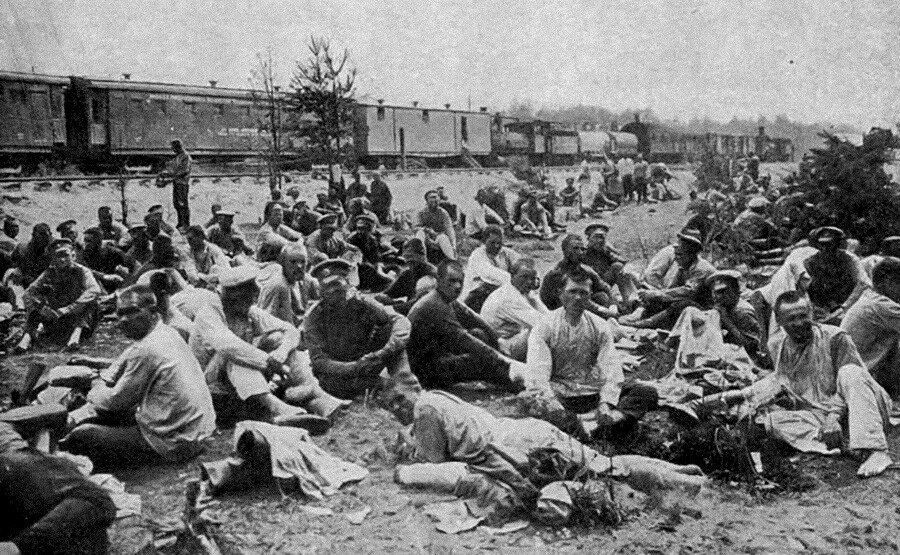 As many as three banya trains were put into operation in different sectors of the front in World War I. The first such train consisted of 19 carriages, two tanker cars and a locomotive. On board were banyas, delousing and disinfection rooms, boot and uniform workshops, changing rooms, a tea room, canteen and kitchen. Mobile laundries were housed on separate trains.

During World War II, the USSR sent out close to 100 banya trains with a view to preventing the spread of epidemics. They shuttled on the most diverse routes: For instance, the 38th banya-cum-laundry disinfection train, built in Tyumen,“fought its way” through Stalingrad, Brest, Minsk, Prague, Warsaw and Berlin.

By comparison with the above examples, a banya installed on the back of a truck doesn’t seem anything out of the ordinary: The services of such a banya are available all year round and are rapidly gaining popularity among devotees of hunting and fishing. 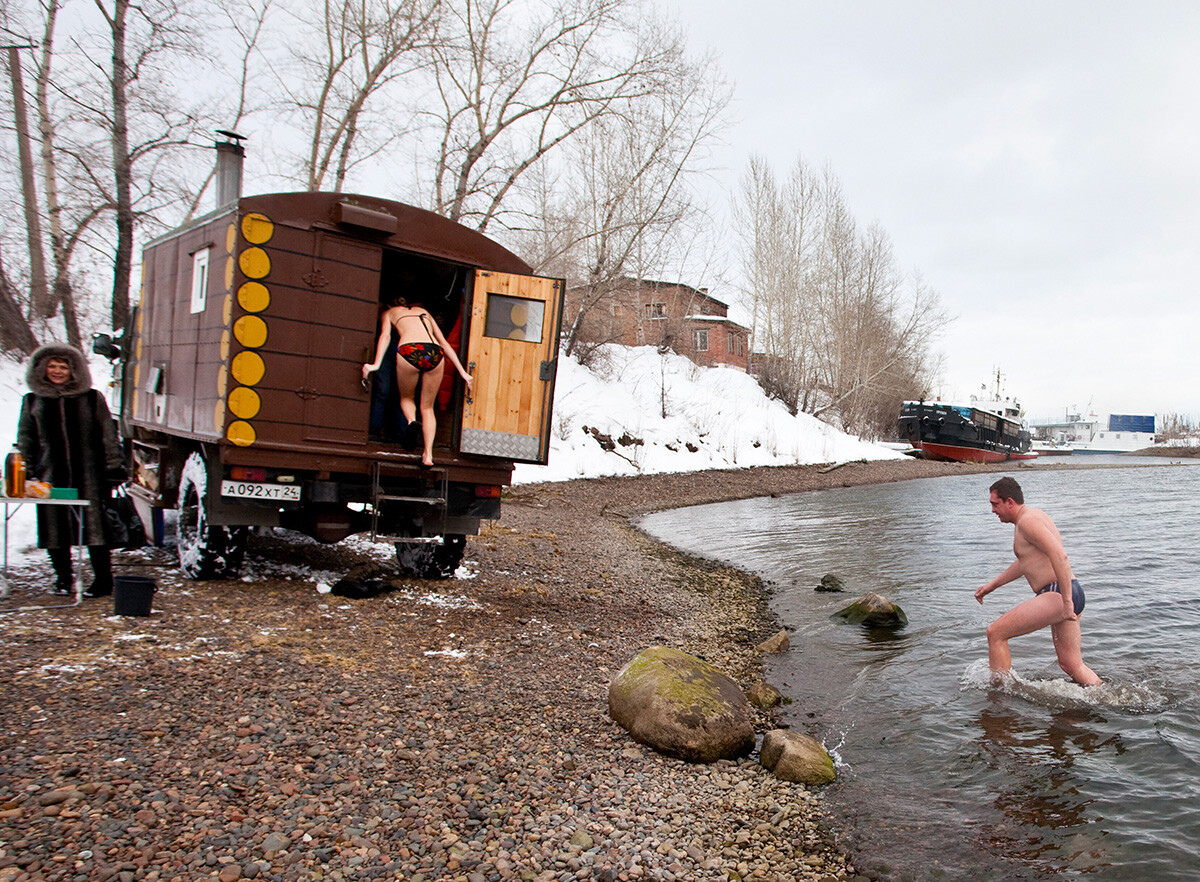 Mobile baths on the bank of the Yenisey River

A banya on wheels capable of accommodating 3-5 people consists of a thermally-insulated freight van on a KamAZ, ZIL or GAZ chassis, with two wood-lined compartments - a steam room and a changing room with shower facilities. A stove is installed on the outside, and a water tank on the inside. To prevent the stones of the stove from being dislodged when the van is moving, they are “threaded” on wire like a string of beads.

A more spacious banya suitable for a group of more than five can be installed on a bus. Apart from the standard facilities, it can have a separate shower, bar, portable toilet, a relaxation area and even a massage room. 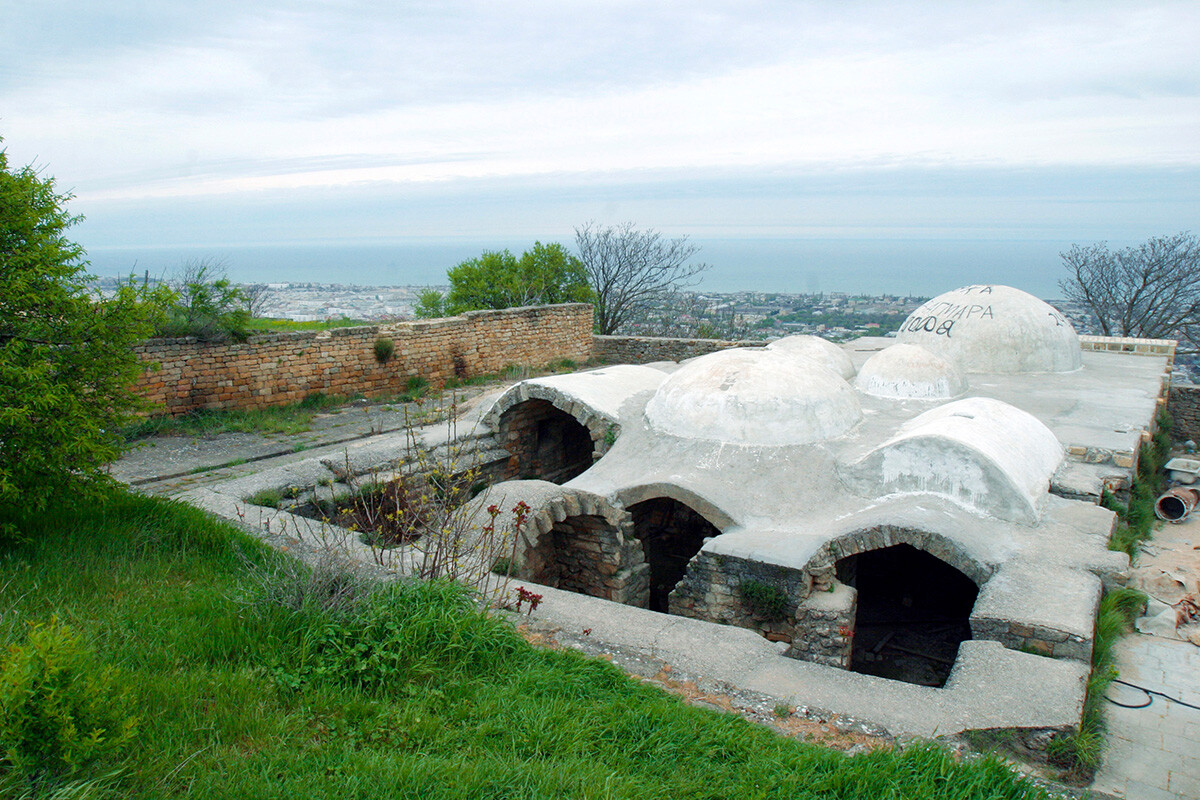 A dugout banya is simply regarded as a practical solution to allow fans of steam rooms to save on logs and heat insulation. The main things that mustn’t be skimped on when building such a banya are drainage, ventilation and damp proofing (to keep out underground water).

In Old Russia, a dugout or semi-dugout that people used for washing, heated by a fire, was called an istobka and this was the precursor of the modern Russian banya. To build an istobka you had to dig a pit in the ground about a meter deep and place supporting posts around the perimeter, protruding about another meter above the ground. The roofs consisted of a log decking, or they could be double pitched, which was more convenient for extracting the smoke. They were covered with sticks, poles and straw, coated with clay and buried in soil, which then became overgrown with wild grasses, writes Yury Khoreyev in his book ‘The Theory of Bath Houses’. In winter, snow on the roof created an additional layer of thermal insulation. The stoves in these istobkas, set at the back of the underground chambers, only had a single opening at the side, which was used both for adding firewood and for smoke extraction. The design features of a banya of this type entailed raised moisture levels.

Underground banyas were no less popular in the Caucasus. They were constructed along the lines of Oriental-style hammams - arched and domed structures sunk two or three meters into the ground with separate furnace rooms. 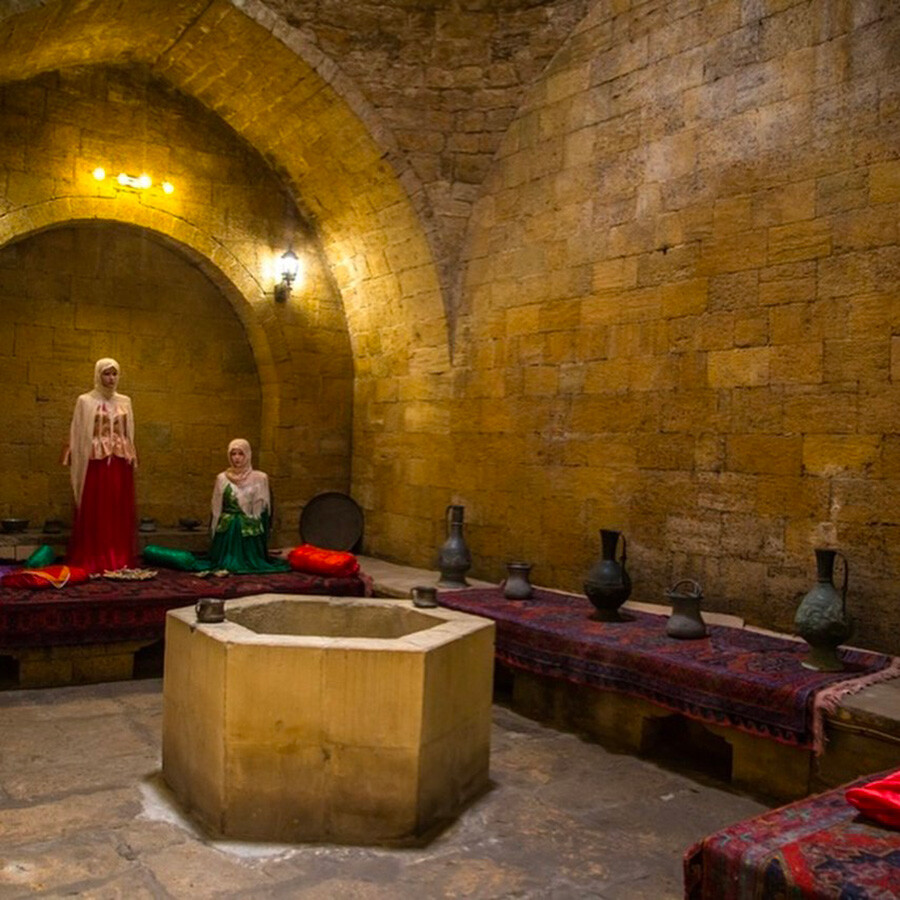 One such banya - known as Devichya (‘Maidens’ Bath’) - has survived in Derbent (Republic of Dagestan). Built in the 13th century, it was designed for the prenuptial ablution of girls. Today the building houses the Museum of the Culture and Daily Life of Ancient Derbent.