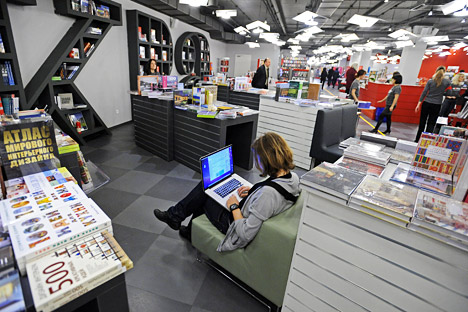 Russian bookshops are being transformed into salons where everyday readers can meet their literary giants. Source: ITAR-TASS.

During the past 20 years, Russian writers have been trying to find their place in a new reality. The task is herculean, at best: A modern writer is expected, on the one hand, to follow a great literary tradition and, on the other hand, to interpret contemporary society. This struggle reveals itself through several (exactly seven) categories that unite today’s fiction writers.

There are two extreme situations that frequently recur in Russian literature: prison and war. There is a Russian proverb that translates as, “There is no fence against ill fortune,” and it has become clear that in times of upheaval, prison can happen to anyone. Any author who writes about the prison experience, however, will be compared to the standard bearers, “One Day in the Life of Ivan Denisovich,” by Alexander Solzhenitsyn and “Kolyma Tales” by Varlam Shalamov.

Andrei Rubanov is a popular author whose topical novels explore not only imprisonment but also self-transformation in prison--and in that his work differs from the tales of survivors of the Gulag system. “Do Time Get Time,” was a self-published work written while he was in one of Russia’s most notorious jails, a sudden turn of events for the erstwhile wealthy businessman with a crackerjack lawyer. Eight weeks after it was published, the novel was short-listed for the National Bestseller Prize. “Great Dream” was released a year later.

The return of Russian literature

Today’s war prose is greatly influenced by Soviet front literature, except today, combat veterans often write and publish their texts on the Internet. They rarely become widely known: Prilepin, a rare exception, became known as a literary revolutionary after his work “Pathologies,” about the Chechen wars, came out in 2005. There are also war writers who have little or no experience in conflict zones. For instance, Vladimir Makanin, who wrote about Chechnya in his novel “Asan,” was accused of mythologizing Chechnya by authors and veterans alike. Nonetheless, he was awarded the prestigious Bolshaya Kniga (Big Book) literature prize in 2009.

2. Death of an Empire

The tumult of the1990s brought on a collective sociological trauma that resulted in deep cultural wounds. A decade later, the collapse and destruction of the Soviet Union has become a core subject for writers. It may even have turned into a kind of neurosis. Still, themes based on the resurrection of the empire are both popular and cathartic.

Obsession with the end of the empire is not a new phenomenon for writers and readers in Russia. After the revolution of 1917, monarchists lamented the death of a great country. Nostalgia for the past can be found in Alexander Prokhanov’s “Mr. Hexogen,” Prilepin’s amusing collection of short stories “Boots Full of Hot Vodka,” Mikhail Elizarov’s humorous and thrilling “Librarian” and Leonid Yusefovich’s “Cranes and Dwarfs,” winner of the Big Book award).

In the mid-2000s, authors created a stereotypical image of the modern executive or office worker who spends money on dubious entertainment. This deeply flawed but sympathetic character, (who originated with the likes of “Bridget Jones’s Diary” by Helen Fielding), also reflected the urban middle class that was developing at the same time.

In her novel “Light Head,” Olga Slavnikova tries to understand how a modern and self-absorbed urbanite would behave if he discovered he had to sacrifice his own life for society’s sake. Rubanov’s “Prepare for War” similarly conjures up an image of a banker with high self-regard who is surrounded by more typical folk.

Mining for love in a Dystopian Russian future

Sharp change is a recurrent national trait in Russia. The time ‘before’ and ‘after’ can always be distinguished. Oftentimes,  ‘before’ surprisingly seems ideal and desirable again.

Boris Akunin’s popular detective stories have the following dedication: “In the memory of the 19th century, when the literature was great, belief in progress was infinite and the crimes were committed and detected with grace and style.” Satirist, poet and novelist Dmitry Bykov considers the 1920s and 1930s, with its strange and hectic intellectual life, to be the Golden Age, at least until the Terror brought much of that life deeply underground.

The past decade has also been a time of great reflection on heroes sung and unsung. Russian literature has experienced a biographical boom; authors have published biographies of Pasternak, Gorky, Solzhenitsyn and other prominent figures of the 20th century, and to much acclaim.

Post-apocalyptic and dystopic novels are in great demand, even devoured by Russian readers. Several series of books describe the world destroyed by colorful and dramatic catastrophes, from “S.T.A.L.K.E.R, “ and “The Inhabited Island” to “Metro 2033.”

Anna Starobinets “Living” describes a world of total control, which originated from the present world of the social networks. Vladimir Sorokin in his dilogy Day of the Oprichnik and Sugar Kremlin mocks at myths about the Golden Age describing the authorities in the nearest future that have features of both Stalin and Ivan the Terrible. The latest Pelevin’s novel S.N.U.F.F. mocks at both supporters and opponents of the political correctness.

Russian literature is very capital-centric: the action of so many novels takes place in Moscow or St. Petersburg. Otherwise, a reader is shown an emphatically provincial town that is terribly remote and exotic, even to Russians. By the end of the 2000s, a fresh genre of provincial prose, documentary or semi-documentary, appeared. These works are a present-day chronicling with almost journalistic pretense, yet most of the stories are both imagined and intimate. They are also at times evocative and even visionary. Vasily Avchenko, a journalist from Vladivostok, describes the Primorye Region’s history in “Right Hand Wheel” and “The Globe of Vladivostok”; German Sadulaev writes of the Chechnya he lived in “The Shalinsky Raid.” Alisa Ganieva describes the vicious cycles of today’s Dagestan in her “Salam, Dalgat!.”

Russian literature has long been world-famous for its ability to describe characters’ emotions and inner world. Just remember Woody Allen’s hilarious and poignant “Love and Death,” which parodies Leo Tolstoy’s novels and how Americans perceived them. The 1976 film gently satirizes Russians’ romantic, full-throttle emotionalism and sentimentality as well as American pragmatism.

Yet it’s clear that in the 21st century, very few Russian authors can explore strong feelings or intimate portrayals of love and death. But those who can write about the depths of our interior lives are captivating readers.

Lyudmila Ulitskaya writes simply and deeply about what it means to be human, and what it means to be transported beyond the everyday. Her most successful novel in recent years is “Daniel Stein, Interpreter,” which in breaking every boundary also transcends them. Love and other emotions are central to Mikhail Shishkin’s novel “A Compilation of Letters,” which received the Big Book award last year. Alexander Ilichevsky artfully describes a hopeless love in “The Persian.”

It’s true that today’s writers don’t create enough serious novels about love or family in epic form as envisioned by Leo Tolstoy. Authors, publishers and critics acknowledge this obstacle to the literary renaissance. The family theme, however, is returning, slowly, and that is a good sign. Probably, soon, love will be back in favor too.