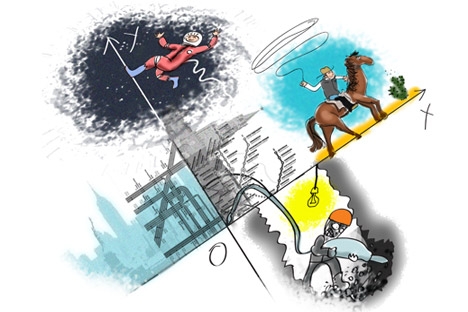 While London celebrates the 150th anniversary of the opening of the first subway on Jan. 9, Alexander Genis compares the legendary Moscow and New York rapid transport systems, which embody the essence of the Soviet and American mentalities.

The New York subway has been described as the picture of Dorian Gray. True, the 240-mile journey along this cat's cradle does indeed leave the distinct impression that the vices and duplicity of the city above have left indelible marks on its sordid underbelly. The New York City subway is generally so bereft of positivity that it is impossible not to mention a few rare exceptions.

The first act of love was at its opening in 1904, when proud creator August Belmont Jr. ordered the construction of his own private railcar with "transparent walls." We have to jump 90 years for the second declaration of love: a young fan of the decrepit subway hijacked a train and for five hours took the unsuspecting public for a ride.

Between these two events lies a rather dull biography of an ordinary network of tram lines, which never quite came to terms with the underground way of life. The NYC subway is forever trying to break through to the surface. It traverses the city like a patchwork quilt, reminding me of an apt Russian proverb: "Long thread, lazy girl.”

After hiding under a roadway for 50 blocks, it suddenly surfaces with a frightful crash onto an overpass to take a gulp of fresh air and remind the world of its existence. But it doesn't need to: the subway is so shallow as to be constantly audible. Through the din of the crowd, the whirring of a police helicopter, the howl of sirens and horns, the de profundis roar of the underground beast permeates the entire city.

The NYC subway assaults the senses with its exuberance and organic nature: the stench of urine-soaked platforms, the entangled intestines of the walkways, the obscene graffiti on the tiled station walls. As the sassy rats, mad preachers, buskers, and tramps well know, life here never sleeps.

The subway is too closely bound to city living, including its "social peristalsis" and its environment: even the climate here copies and magnifies New York's weather. It lacks a decontaminating layer of soil that isolates underground life from terrestrial influence, which imparts special significance to the Old World's most fascinating rapid transport system: the Moscow Metro.

In New York, the subway does not advertise itself. It restricts itself to a hole in the tarmac leading directly to the city's guts. In Moscow, meanwhile, the subway represents an entire architectural ensemble, resembling at times a cathedral, at times a crypt. The journey downwards from one realm to the other takes place on a long, unhurried escalator, allowing the pilgrim time to adapt to the haughty, hermetic, autonomous splendor.

Whereas in New York the subway is like the streets above, only worse, in Moscow the opposite is true: underground life here is cleaner, more temperate, and more elegant. This is understandable: the Moscow Metro is the last refuge of utopia, a microcosm of what the country strives to be.

The NYC subway is the belly of its city, the Moscow Metro the bosom. Whereas New Yorkers descend into the subway out of necessity, Muscovites emerge from the relative safety of their system almost unwillingly.

It is as if the Moscow Metro has inherited that historical fear of open spaces — the threat of invasion from the boundless steppe. Deprived of any natural borders, the country maniacally defends its artificial boundaries. This marbled underground kingdom, a grotesque hyperbole of a bunker, provides shelter from the nomads.

Americans, meanwhile, themselves a nomadic people, settlers in a foreign land, suffer from claustrophobia. They are averse to diving into the ground and shrink from the harmless underpasses that populate the Old World. Even at the height of the Cold War, Americans preferred to build shelters in their own backyard in domestic conditions, far removed from the collective hell of the subway.

The two systems will never see eye to eye: they belong to different civilizations — one horizontal, the other vertical. Not by accident were the main heroes of Soviet life — the miner and the cosmonaut — detached from the Earth's surface. But America's idol — the cowboy on his trusty steed — could only perform his daring exploits with boots (and hooves) in contact with terra firma.