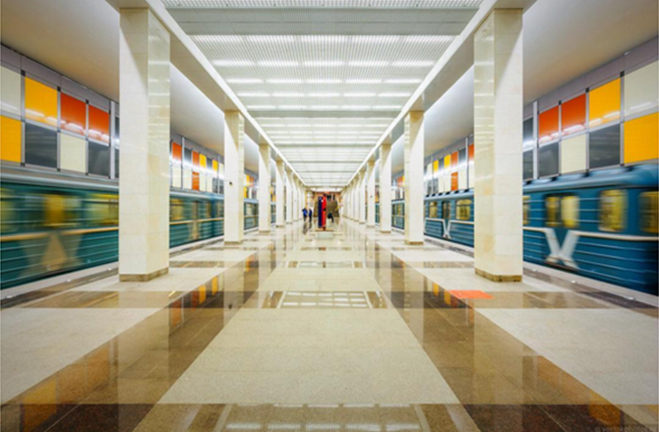 Instagram
Newly opened metro stations have nothing in common with Soviet style.

On February 15 Moscow’s 200th metro station opened. If the older stations, which were built during the Soviet period, look like tsarist palaces or museums to communism, then the new stations have more of a European style and flair to them.

Each of these stations is unique and all are worth visiting (make sure to check out our list of the top 15 things to do in the Moscow Metro).

The 200th station is called Salaryevo and you can find it at the end of the red line. Now the Moscow metro can deliver its residents to a new part of Moscow, and inhabitants from this area can now reach the center in just 20 minutes.

The station design is based on the avant-garde style of famous 20th century Russian artists Kazimir Malevich and Wassily Kandinsky. Two new services are available here: passengers can charge their phones at the station and are offered a protective film to pack their wet umbrellas in.

One month ago, Rumyantsevo station also opened its doors at the end of the red line. Its design was inspired by the works of Dutch painter Piet Mondrian.

Tekhnopark station, which opened in December 2015, looks new and shiny even though its foundation was laid back in Soviet times. While its construction was frozen for a long time, it is now an important transport junction, as there are many business centers and new residential areas nearby.

Kotelniki metro station is also brand new having just opened in September 2015. This station’s arrival has improved the lives of local residents, as this is one of Moscow’s busiest commuter lines.

In recent years an ambitious development program has been implemented by the Moscow Metro. By 2020 the length of the Moscow subway must grow 1.5 times in comparison with 2011, an increase of 160 kilometers of tracks. There are plans to open 60 new stations.