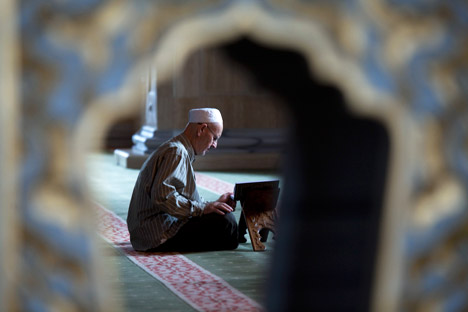 Believers praying in the central mosk in Grozny, the capital city of the Chechen Republic, Russia.

Iliya Pitalev/RIA Novosti
Many ancient Islamic manuscripts were brought to Russia, thanks to the wisdom of the country’s greatest rulers such as Peter the Great and Catherine the Great. RBTH presents a list of the five most interesting manuscripts of the Koran that are kept in the country.

The Institute of Oriental Manuscripts in St Petersburg has a copy of the Koran that Central Asian Muslims have for many centuries considered to be one of the first manuscripts of the holy text.  Recently, a fragment of Osman’s Koran was found in a small village not far from the Uzbek-Afghan border.

Fragments of ancient Kufic Korans take pride of place in Russian museum collections. One such collection belongs to the Russian National Library in St Petersburg. It originates from the Mosque of Amr ibn al-As in Old Cairo (built in 643). The library’s collection is the biggest in Europe and one of the biggest in the world in terms of the number of Kufic (the oldest calligraphic form of Arabic script) manuscripts. An important part of that collection is a considerable fragment of one of the oldest manuscripts of the Koran, the second part of which is now kept at the National Library in Paris.

A unique manuscript of the Koran is kept at the Russian State Archive of Ancient Acts (in Moscow). An inventory of the archives of Posolsky Prikaz (the then ministry of foreign affairs) compiled in 1560 under Tsar Ivan the Terrible mentions “a Tatar Koran that is used in oath ceremonies”. What has survived till present day is a copy of the Koran that was used by Muslims when taking an oath and being sworn in. In it, Ayat 16:91 that was used when taking an oath, is written in gold letters.

Three miniature octagonal Korans, which traditionally formed part of Muslim army banners, are now kept at the Peter the Great Museum of Anthropology and Ethnography (Kunstkamera) of the Russian Academy of Sciences.

Another unique piece is a miniature copy of the Koran that belonged to the famous jeweler Karl Faberge, who bought it to mark the completion of a long-term commission from French Princess Cecile Murat.

For his creations, Faberge, the court jeweler to the Russian emperor, received numerous Russian and foreign distinctions as well as medals at Russian and the World Exhibitions. Shortly after the Bolshevik Revolution, the Soviet government – in order to raise money that was desperately needed to cope with the war and devastation – decided to sell some of Faberge’s works abroad. What remained was distributed between several museums.

The Oriental manuscripts that once belonged to the jeweler ended up in an academic collection in St Petersburg.