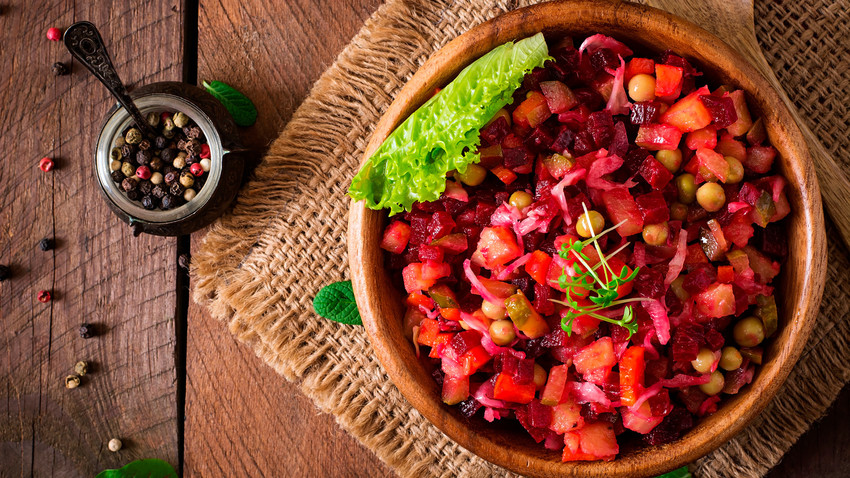 For New Year’s or for every day, this hodgepodge always pleases.

Legion Media
Beloved by Russians, this dish is an essential ingredient for any feast, especially the New Year celebration. There is an unusual twist, however. From a historical perspective, Vinegret can’t really be called a Russian dish. So, why is it a part of traditional Russian cuisine?

This traditional Russian salad has a rather interesting and unusual history because it doesn’t originate from Russia, and came from abroad, though historians are not sure when exactly. The most likely periods are the reign of Catherine the Great (1762-1796), or Alexander I (1801-1825). Nevertheless, Vinegret’s origin remains wrapped in mystery.

Without a doubt the salad’s name derives from the French word, ‘vinaigrette’ - a sauce that consists of vinegar and vegetable oil. Sure enough, both ingredients are part of the Vinegret recipe - although vinegar in Russia was usually substituted for lemon juice. Vinaigrette itself is a pretty exquisite sauce, but it doesn’t correspond with the super-easy Vinegret salad recipe.

For Soviet citizens, Vinegret was truly manna from heaven - tasty, cheap and healthy at the same time. Many rare and gourmet ingredients for other dishes were impossible to obtain in the USSR because of the food shortages, but Vinegret never lost its ground, and became an integral part of Russian life and cuisine. In fact, there’s even a certain phrase in Russian – that any hodgepodge can be called vinegret.

Recipes for Vinegret vary, and some are exotic enough, with seaweed, herring fillet or apples. But beet, carrots, potatoes, lemon juice (or vinegar) and vegetable oil remain the essential ingredients. We now offer you one of the most traditional Vinegret recipes, the one that Soviet housewives usually served to guests.

Put into the fridge for 2-3 hours, serve cold.