How the Soviets transformed a legendary French delicacy 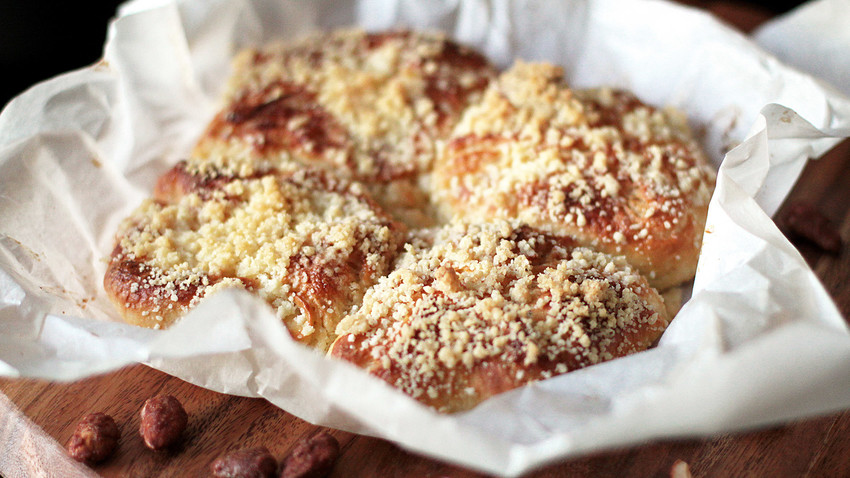 Victoria Drey
Sverdlovsk buns are an iconic Soviet pastry loved to this day. They are light, fluffy, and buttery - and take inspiration from their “elder sister,” the French brioche.

Every Soviet kid was familiar with Sverdlovsk buns: You could find them in almost any school canteen. It is a very distinct pastry because of its unique consistency. Despite being fluffy and yeasty, the buns are deliciously puffy at the same time.

Behind this simple looking pastry is a pretty tricky technology used much earlier to create another well-known delicacy – French brioche. Brioche originated in medieval France: It’s thought the Normans came up with the brioche recipe in the 16th century before variations became popular in different regions. For instance, bakers from the commune of Vandeuil slightly simplified the recipe and called it “gache,” which is also enjoyed to this day as a traditional French pastry.

Eventually, Soviet technologists started playing around with brioche dough. They added streusel - a sweet crumbly topping - and voilà, the Sverdlovsk bun was born. In fact, the name of the bun is actually pretty random as the doughy treat has nothing to do with the city of Sverdlovsk, which is now called Yekaterinburg.

When the city was founded in the 18th century it was one of the major industrial centers of the country with many factories. After the Russian Revolution, Yekaterinburg was named Sverdlovsk after the Communist party leader Yakov Sverdlov. The city was returned to its historical name only in 1991.

My friend’s grandmother who lived there during the Soviet period said Sverdlovsk buns became popular around 1980 all over the country, and that nobody actually knew why this brioche-like pastry was related to the industrial city.

The dough-making method in brioche and Sverdlovsk buns is pretty much the same: After adding the yeast, the dough is left to rise in both a warm spot and the refrigerator for varying periods - it also requires generous amounts of butter for layering the dough to give it its unique puffiness.

First, pour your yeast powder into warm milk and leave for about 10 minutes. While the yeast works its magic, mix the flour, sugar, water, salt, and 1.5 eggs in a clear bowl. The remaining half of the egg will be used later. 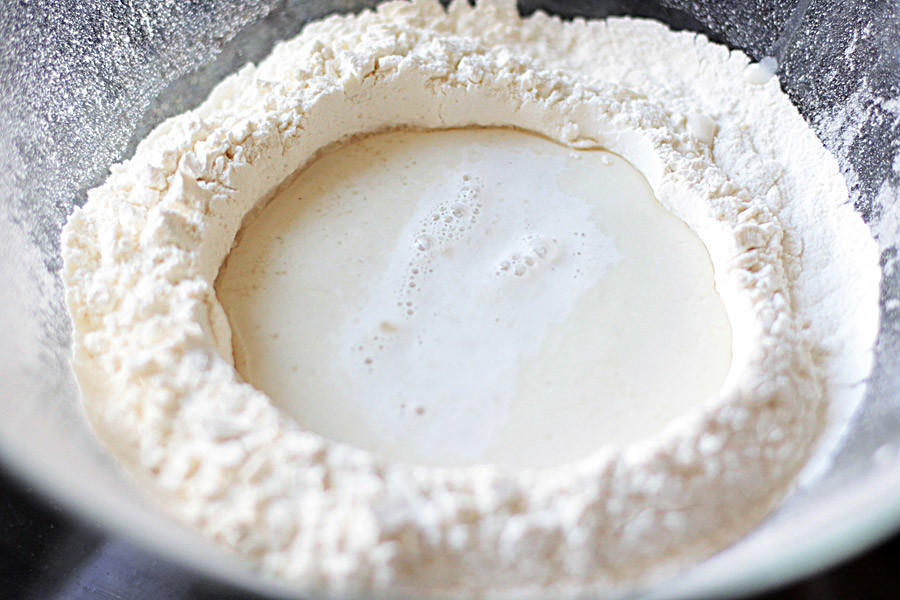 Add milk to the yeast and knead into a soft dough. Don’t worry if it’s slightly sticky: It means your buns will be incredibly soft and fluffy. Cover the dough with a plastic wrap or towel and leave to rest in a warm place for about an hour until it doubles in size. 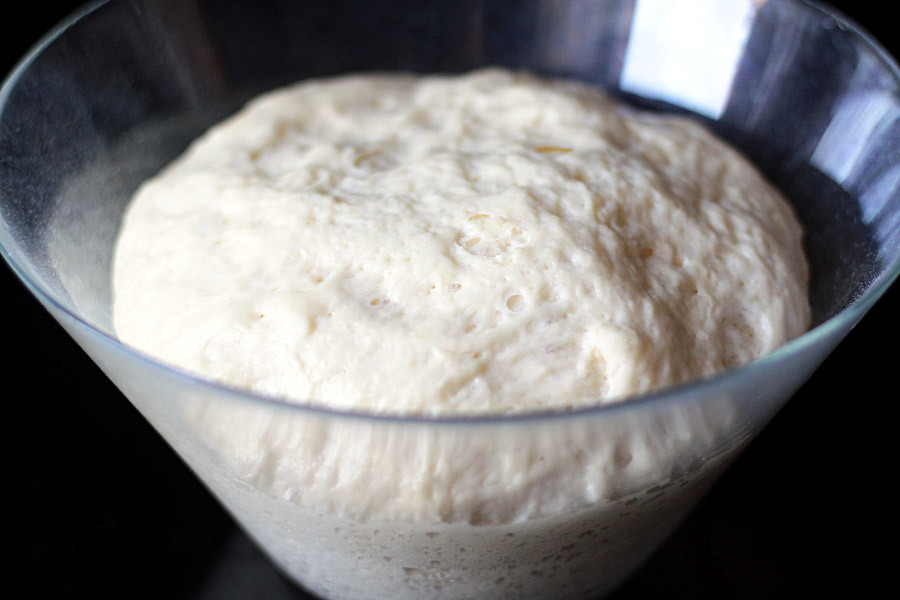 Dust your cooking surface with some flour and place the dough. Now roll it into a rectangular layer about 2cm thick. Take half the soft butter and spread it on 2/3 of the dough. Next sprinkle the buttery part of the dough with half the sugar. 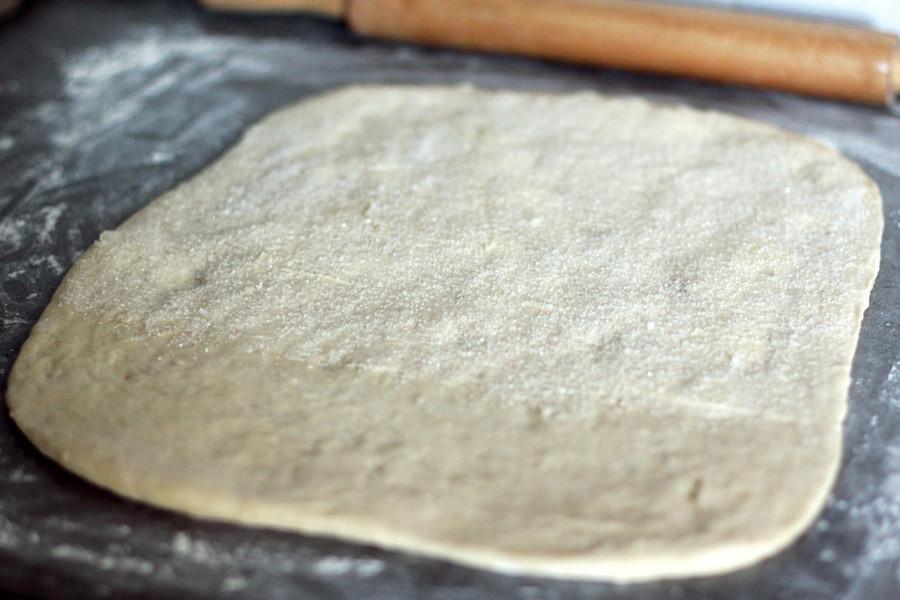 The following step is the most important – you have to do the “triple layering” technique. Firstly, layer the part of the dough without butter. 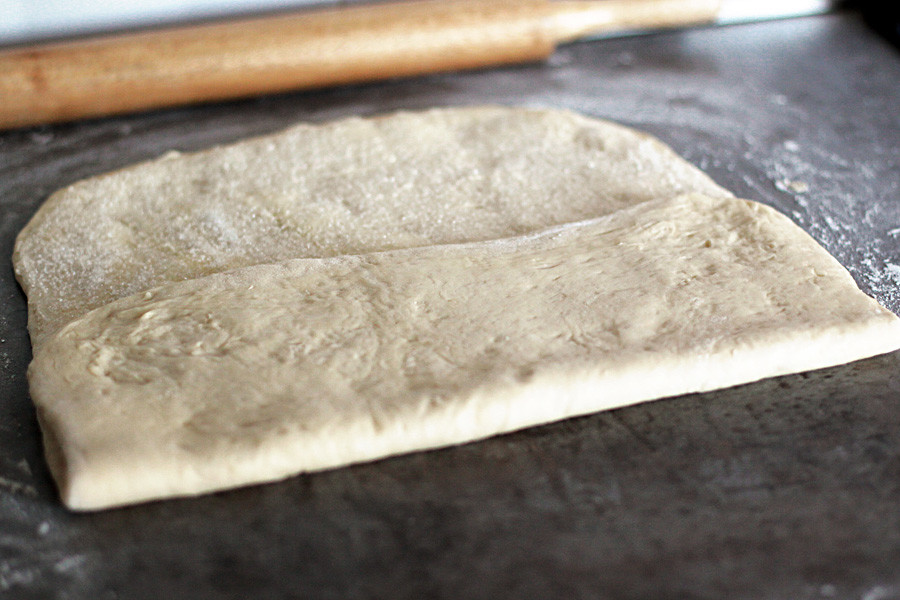 Then cover it with a buttery third and pinch the edges. 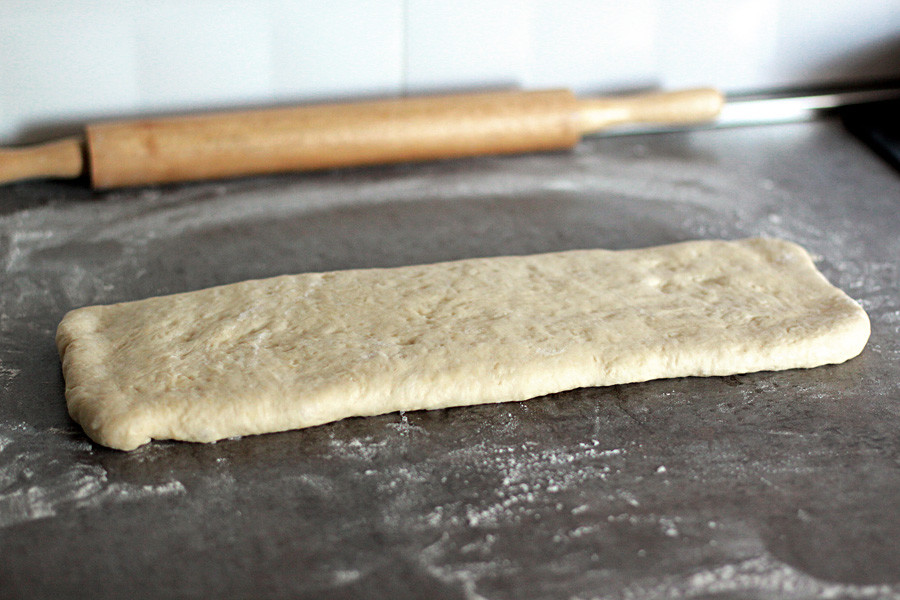 Wrap the dough in plastic and let it cool in a refrigerator for about 30 minutes. After, unwrap the dough, roll it out again, and repeat the process with the rest of butter and sugar. Wrap it up again and leave in the fridge for another half an hour.

Now simply roll the dough out into a rectangular shape for the last time and cut in 10 equal squares. To form buns, fold the edges of each piece in the center and press with your finger. 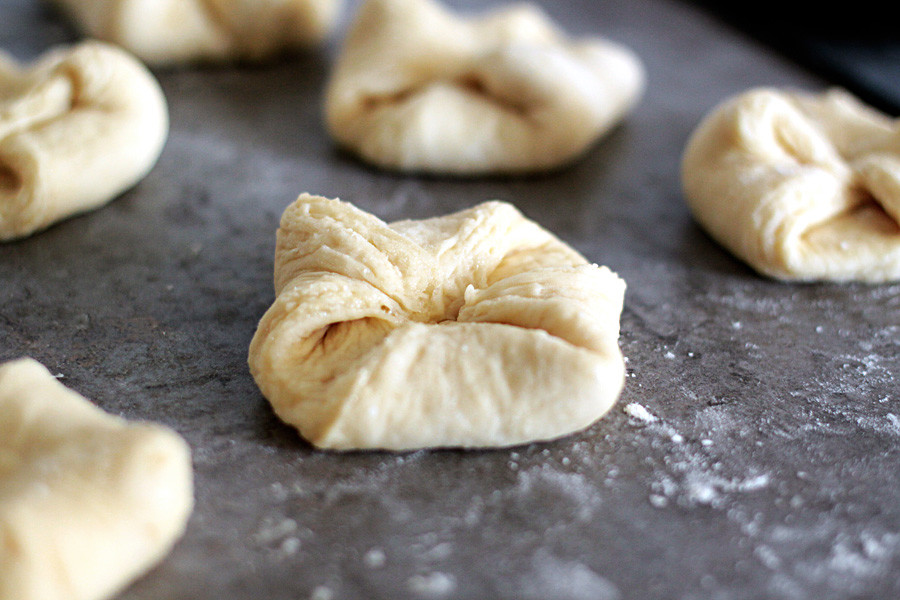 Put the buns on a baking tray and allow to rest for 30 minutes. While the buns proof prepare the streusel: Mix the flour, sugar, and cold butter, then grind the mixture into fine crumbs. Brush the swollen buns with the remaining half egg and generously sprinkle with streusel. 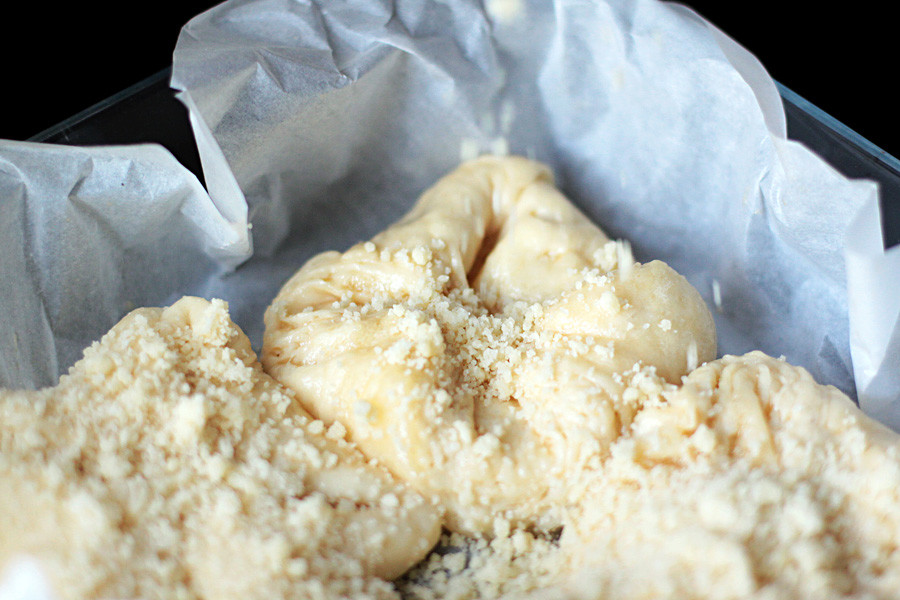 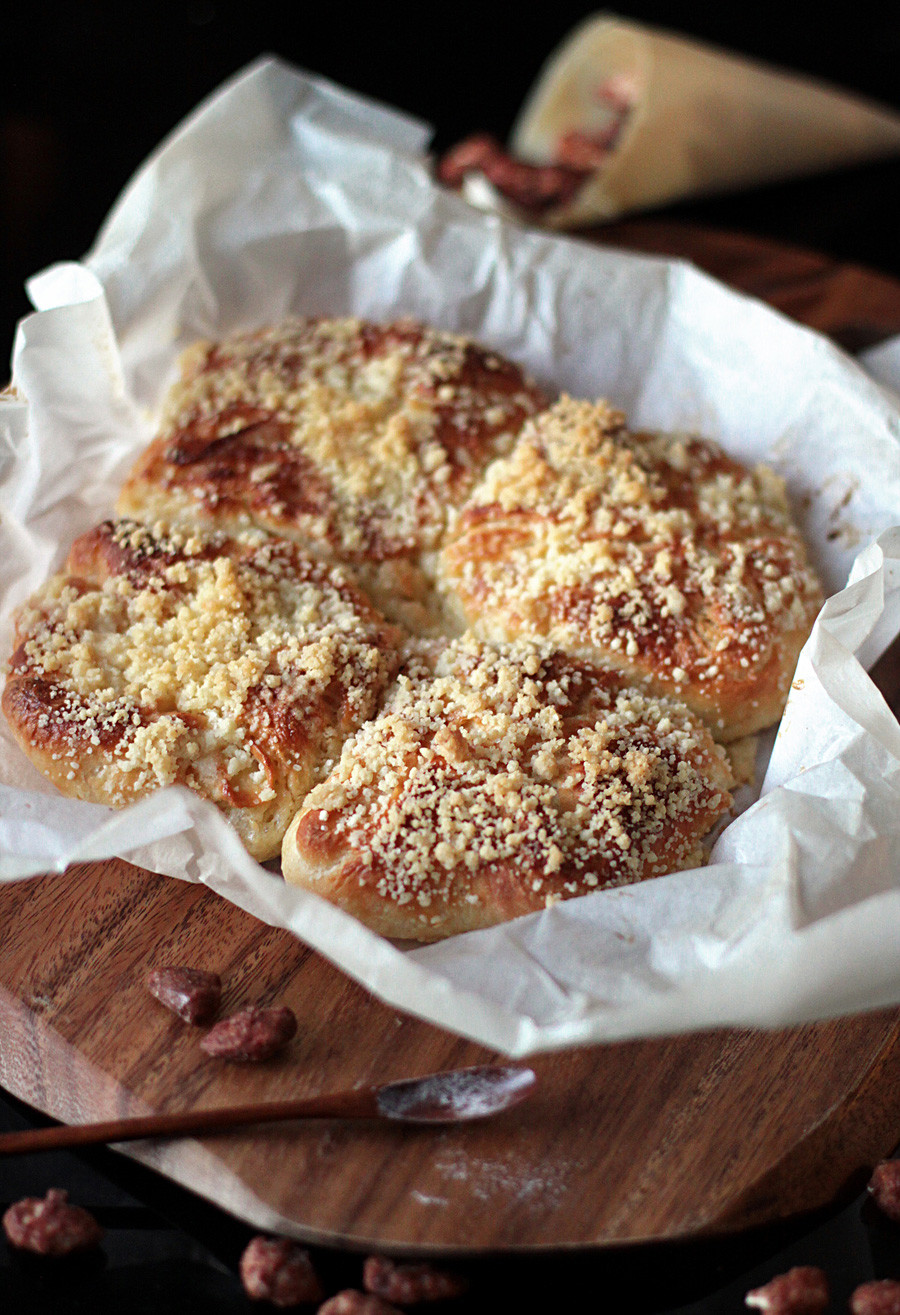