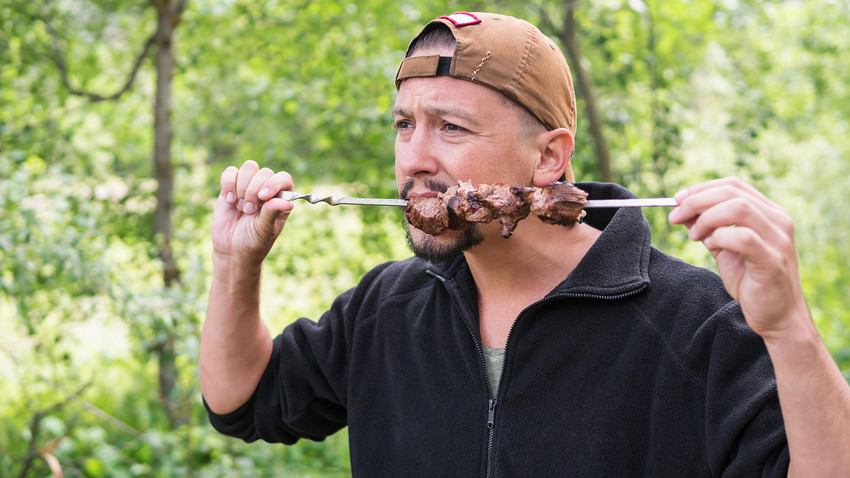 Legion Media
Love grilled meats? Then gather some friends, get out of the city and take a few bricks with you.

Russians don’t barbecue; they do shashlyk. There’s a big difference between the two. Shashlyk has a distinctive philosophy with a different approach from what barbecue people are used to. Shashlyk requires much preparation, but overall it’s an even more laid back process than a barbecue.

Grilling a la russe starts the night before. The basis of a successful shashlyk party is seasoning - the marinade. If salt and pepper are sufficient for a barbecue, such simplicity would ruin shashlyk. 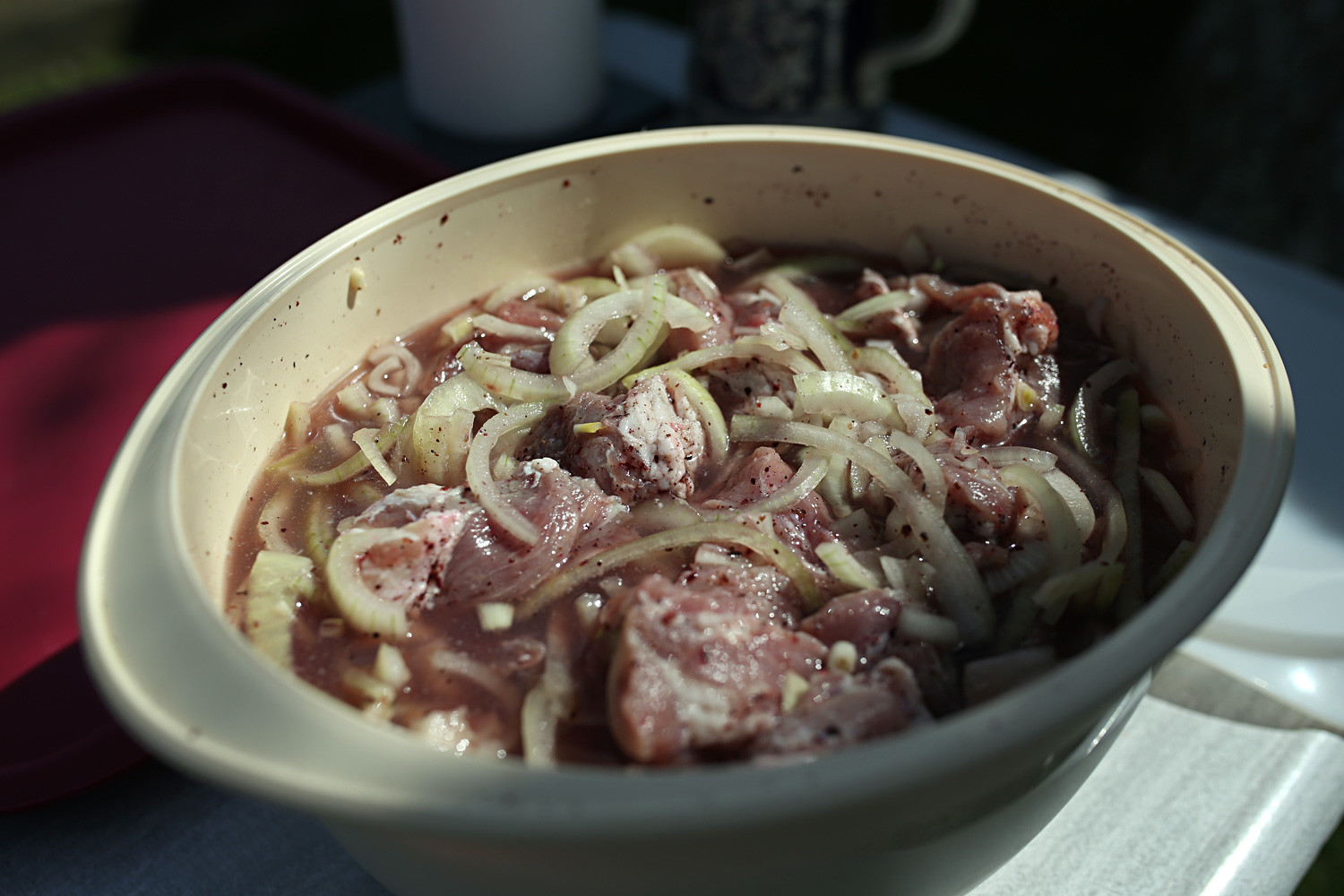 Russians marinade the meat on the night before the party to ensure it stays juicy and soft so that it almost melts in your mouth. There is no universal marinade recipe, and the trick is to experiment and develop your own. An experienced shashlyk-maker is like an alchemist, protecting his marinade recipe as if it were a magic potion.

Hone your skills by starting with the basics: mayonnaise, onion and lemon. Mix in various proportions – it takes a few tries to be a pro, and then you can graduate to a higher level by adding sour cream, yogurt, beer, wine, olive oil, honey and whatever else you find in your fridge. The key is confidence in your skills and patience.

Select the meat following the barbecue logic (fatter, juicier parts), but cut them into smaller pieces. Each must neatly sit on a skewer and never dangle.

You can make and enjoy shashlyk anywhere - ranging from parking lots to terraces, but the most authentic experience comes when you go back to nature. Pack up your kids, parents, or friends and leave the noisy city behind. The key is to find a magnificent place in the countryside that’s accessible by car, yet rarely visited by humans. Riverbanks or a forest glade will do. It should be flat, and don’t neglect fire safety rules.

The ultimate rule for a successful shashlyk party: only one man grills the meat. Breaking this rule inevitably leads to a mess, without a culprit to put the blame on if things go wrong. Making shashlyk is an exercise in responsibility: sign up only if you’re confident in your skills; or act confident even if you’re not. Never let your companions doubt your skill, and don’t mess up your grilling by asking for advice.

The use of a thermometer to test the meat is a major violation and will instantly reveal the offender’s lack of skill. Everything must be cut and measured with your sharp eye. When you feel the meat is ready, grab a skewer and take a bite. Trust your instincts.

No offense ladies, but making shashlyk is a manly activity. This does not mean women will inevitably fail to grill a few pieces of meat. There’s simply a certain appeal to a temporary-reinstated prehistoric division of labor based on gender: men hunt, and women look after the hearth.

You will need a brazier, which Russians call mangal. Unlike intricate and expensive BBQ grills, the mangal is ridiculously cheap, starting at $2.5 (150 rubles) in stores across Russia. Essentially, it is a few pieces of metal assembled into a simple structure where you first make the fire and then grill the meat on hot coals. If you can’t buy one in your home country, an improvised brick structure will do. 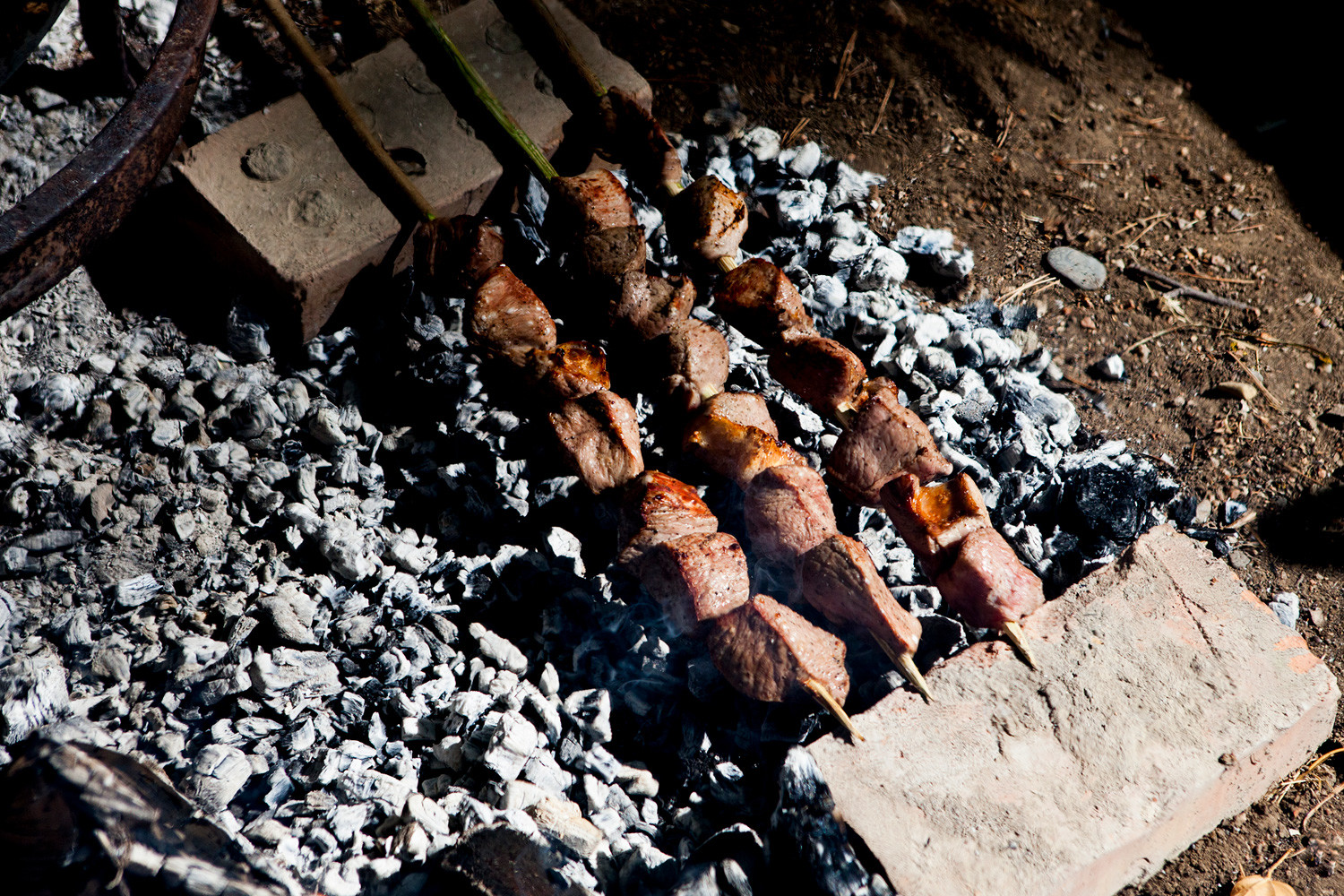 Using firewood (never coniferous wood) to get the fire going makes the most authentic shashlyk. Yet, most Russians opt for packaged charcoal because it saves a lot of time without ruining the taste and violating tradition.

Let the coals heat until glowing white, and spread evenly across the mangal bottom. Finally, lay the skewers with meat horizontally so they latch onto the sides. Frequently turn the skewers to achieve a uniform crust on the meat. 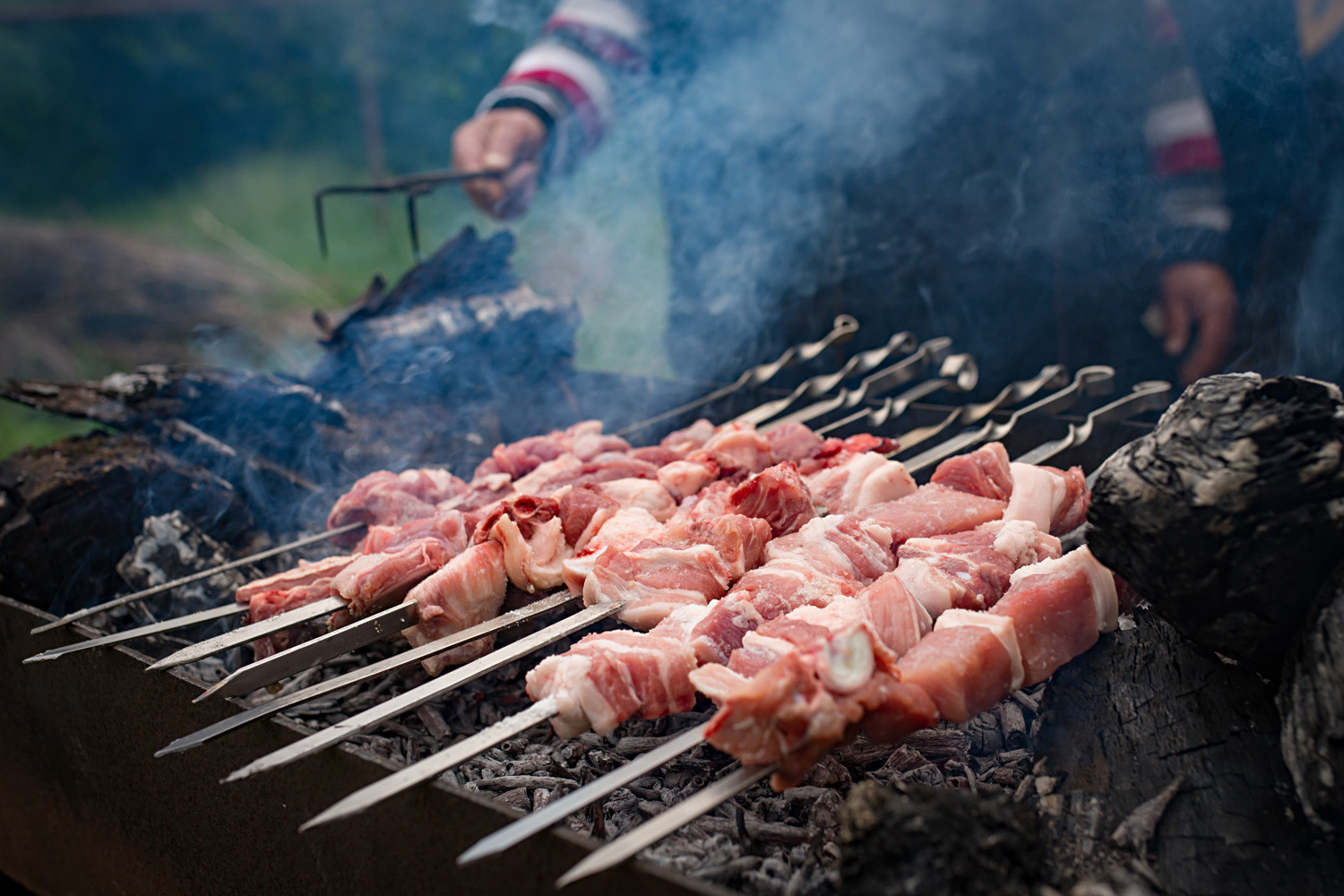 When finished, serve with fresh or grilled vegetables, herbs and bread. Eat immediately. While BBQ experts recommend giving the meat a few minutes to evenly distribute the juices released by the heat, shashlyk pieces are so small that you need not worry about losing any juice because you eat them in one bite. 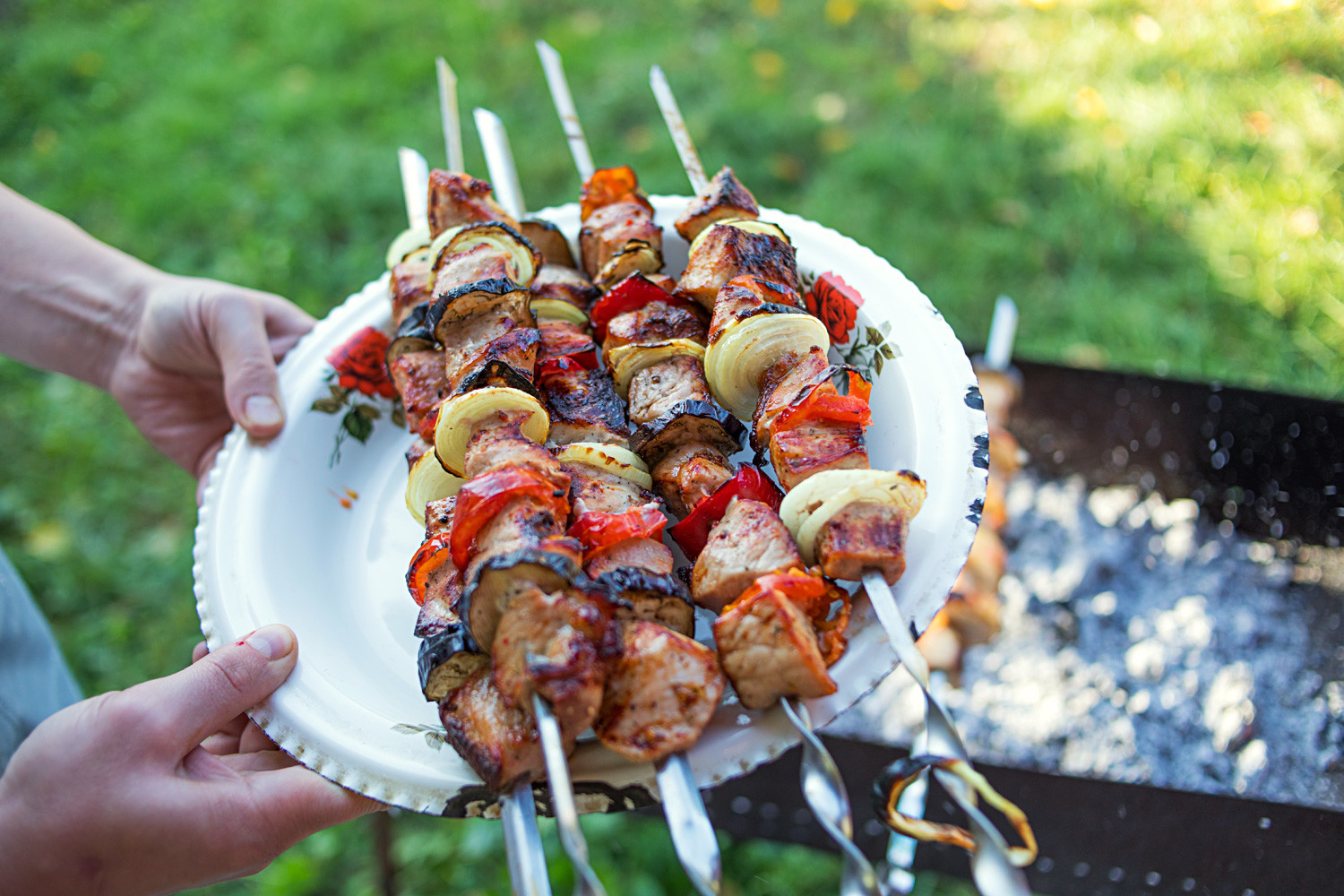 When the party is over and it’s time to get going, make sure you don’t leave any garbage behind. Your shashlyk spot should appear to the next shashlyk connoisseurs as if humans had never before been there. Most importantly, be careful not to start a fire in a field or a forest. It’s much easier to prevent one, than have to contain it.

A great outdoor party takes driving. Here is how to stay sane while driving in Russia.