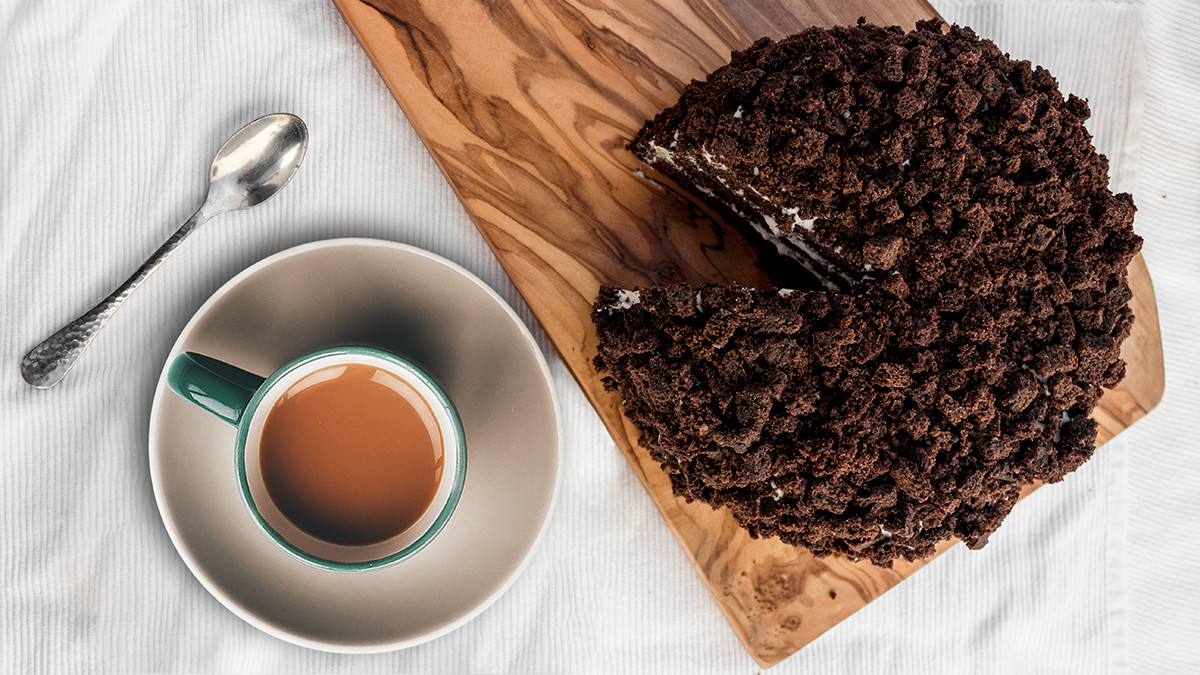 Vasilisa Malinka
This cake repeats the hairstyle and snow-white smile of the ‘freedom fighter’, an exquisite baritone, an African-American singer and actor who sang the Soviet anthem.

Paul Robeson’s cake was especially popular in Russia in the 1980s, and was offered as a treat to Americans who visited the USSR. Some would perceive it as racist, but it was actually a simple people’s tribute to that singer. He was known and adored by all, his recognizable voice resounded on the records in every Soviet home.

In 1934, he made the first of several trips to the Soviet Union and praised the Russian way of life and the lack of racial bias. He was received with all honors, including trips to the theater, banquets and other entertainment. Local audiences were rarely spoiled by foreign performers, especially since the singer had learned several songs in Russian, including the Soviet anthem. The amazing combination of his rich bass with the ringing metal of the baritone made an extraordinary impression on Russian audiences.

Robeson was fascinated by this new society and its leaders; after all, the singer was fond of communist ideas. He was called a friend of the USSR and was awarded the Stalin Peace Prize by the Soviet government in 1953.

This is what the magazine, Krugozor, wrote about Robeson in 1964: “Whoever heard Paul Robson at least once will not forget his voice. We know well this big man with the eyes of a wiseacre and the smile of a child, a great singer and a courageous citizen, whose name has become a symbol of a freedom fighter.”

The peculiarity of this cake is that the classic recipe assumes that the dessert will be sprinkled on top with a “curly” crumb, which was done by passing the chocolate sponge through a meat grinder, representing the hairstyle of the singer. Hence, the chocolate cakes match the skin color, and white cream is used to form the showman's snow-white smile. Today, it is a classic of Russian pastries. The combination of delicate airy chocolate cake with thick sour cream and walnuts is fairly quick and easy to make, as well as quite affordable. It will satisfy any sweet tooth!

Besides the cake, there is also a black tomato variety named after Paul Robeson, and a sort of lilac named in his honor. But we’ll tell you about that next time. Today, let’s cook the cake! 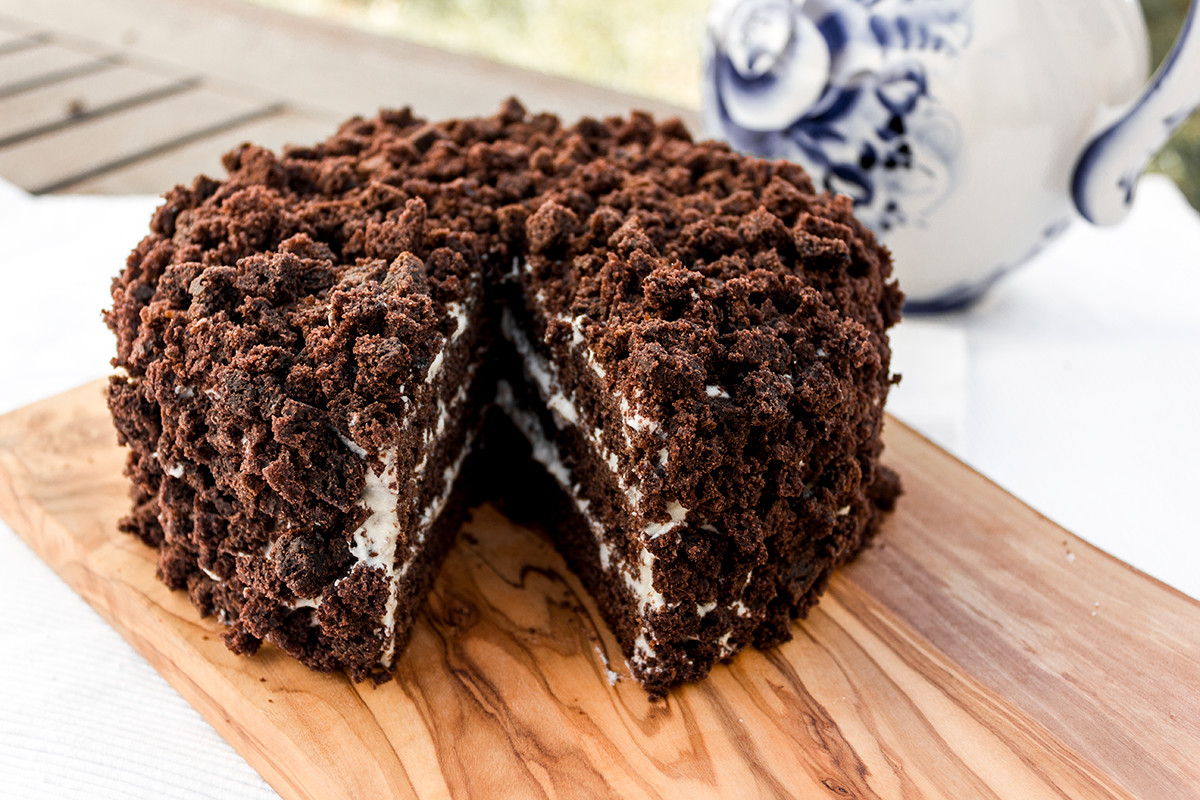 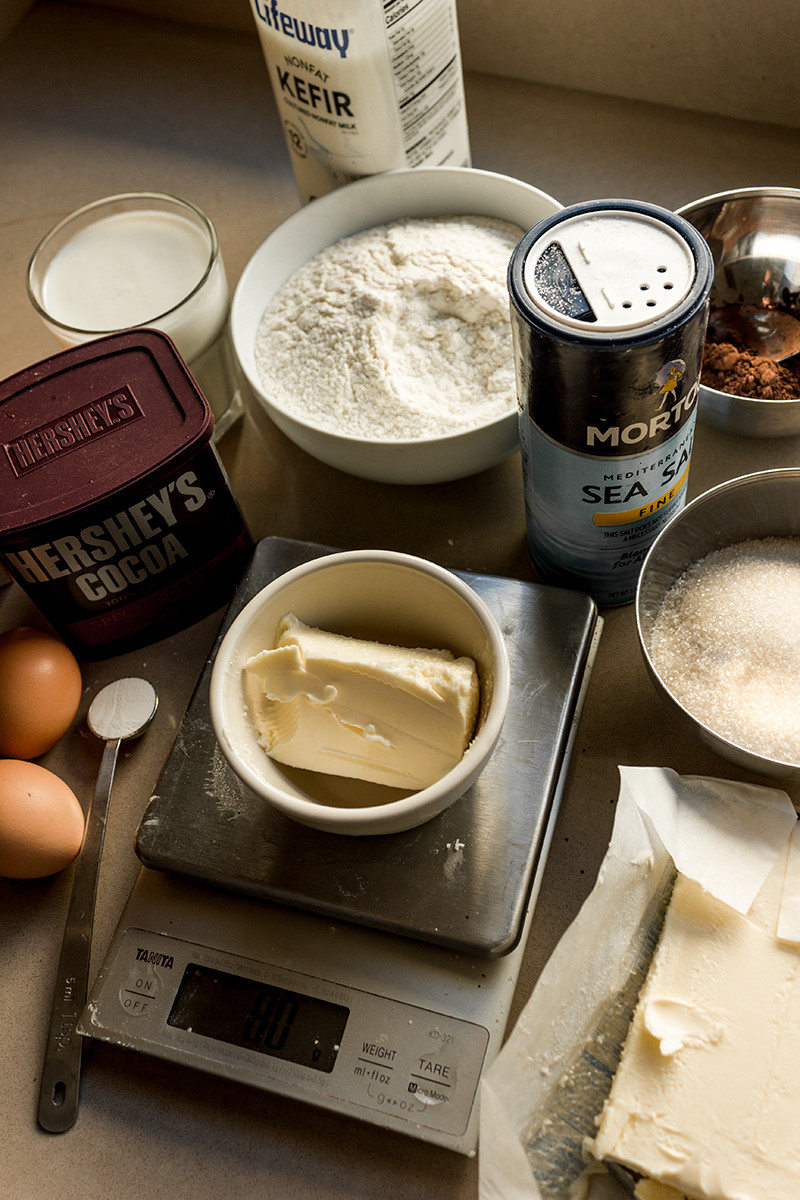 Preheat the oven to 180°C. Grease your mold with oil or butter and then line the sides with parchment paper, which should be higher than the sides of the mold. 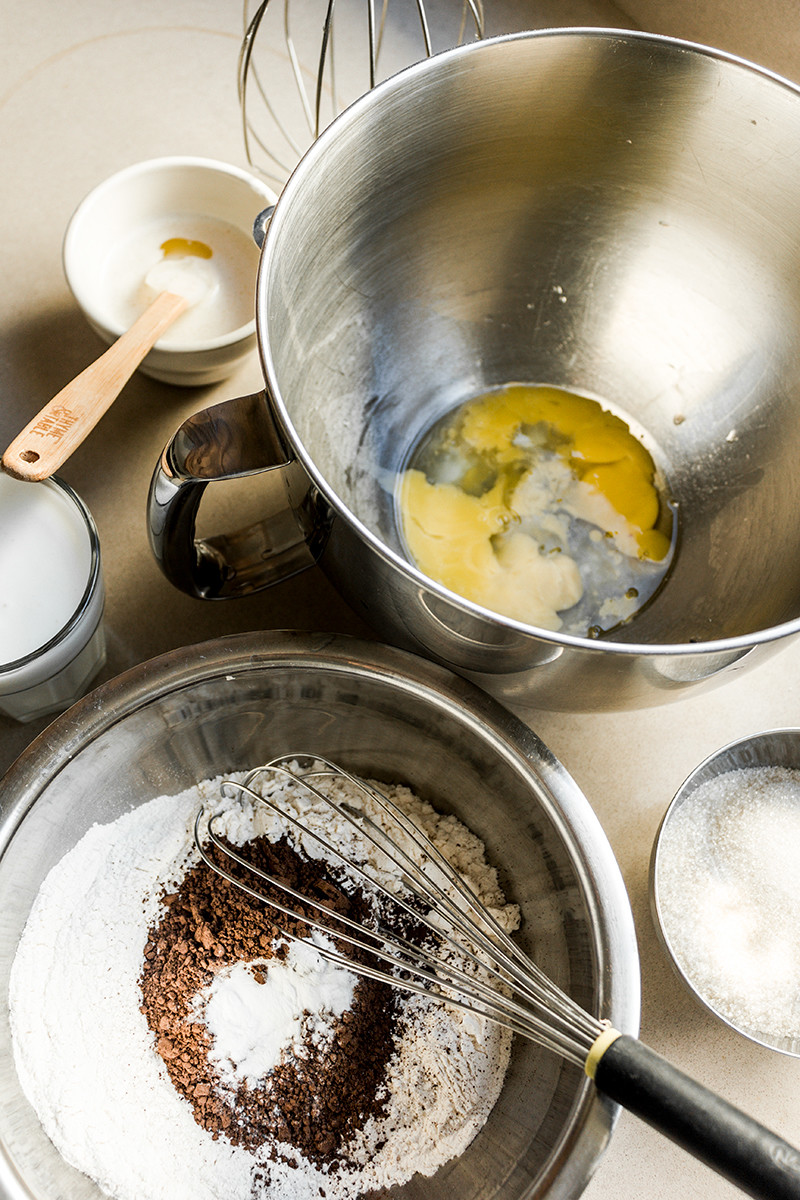 Melt the butter and let cool to room temperature. 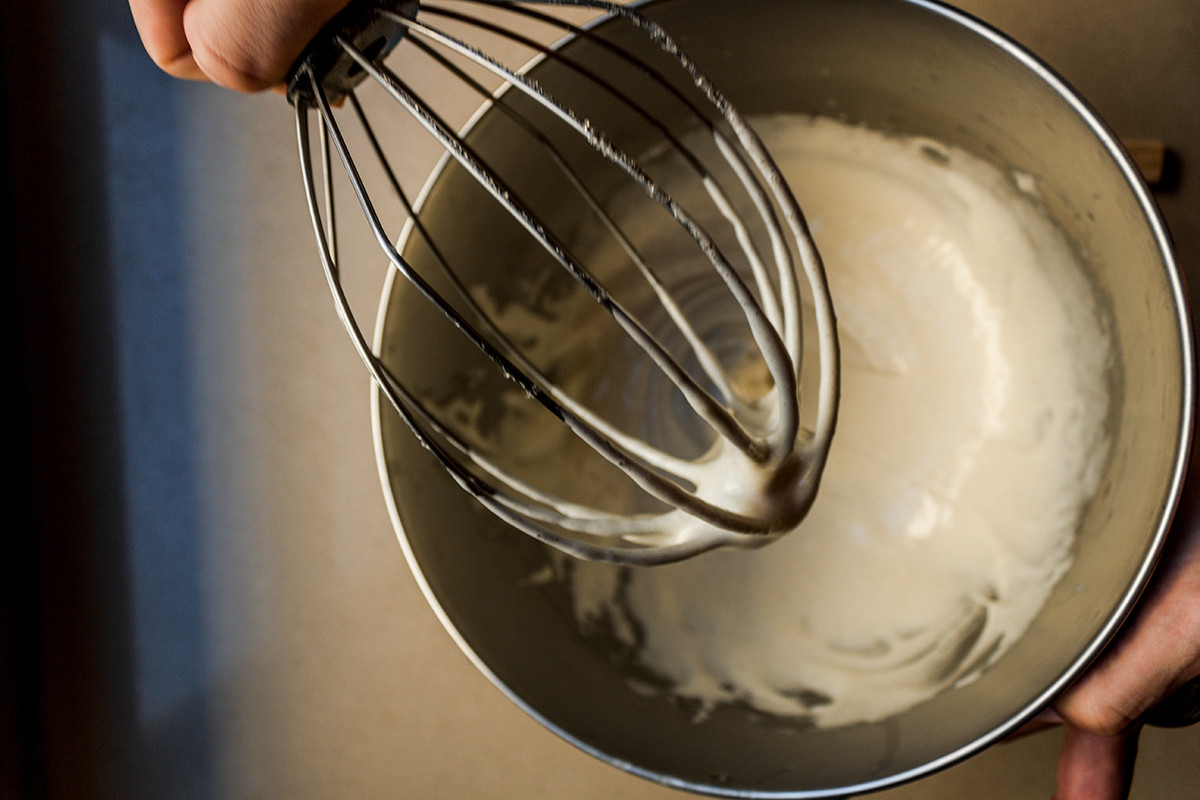 Combine sifted flour, cocoa powder and baking soda in a bowl. Then whisk. 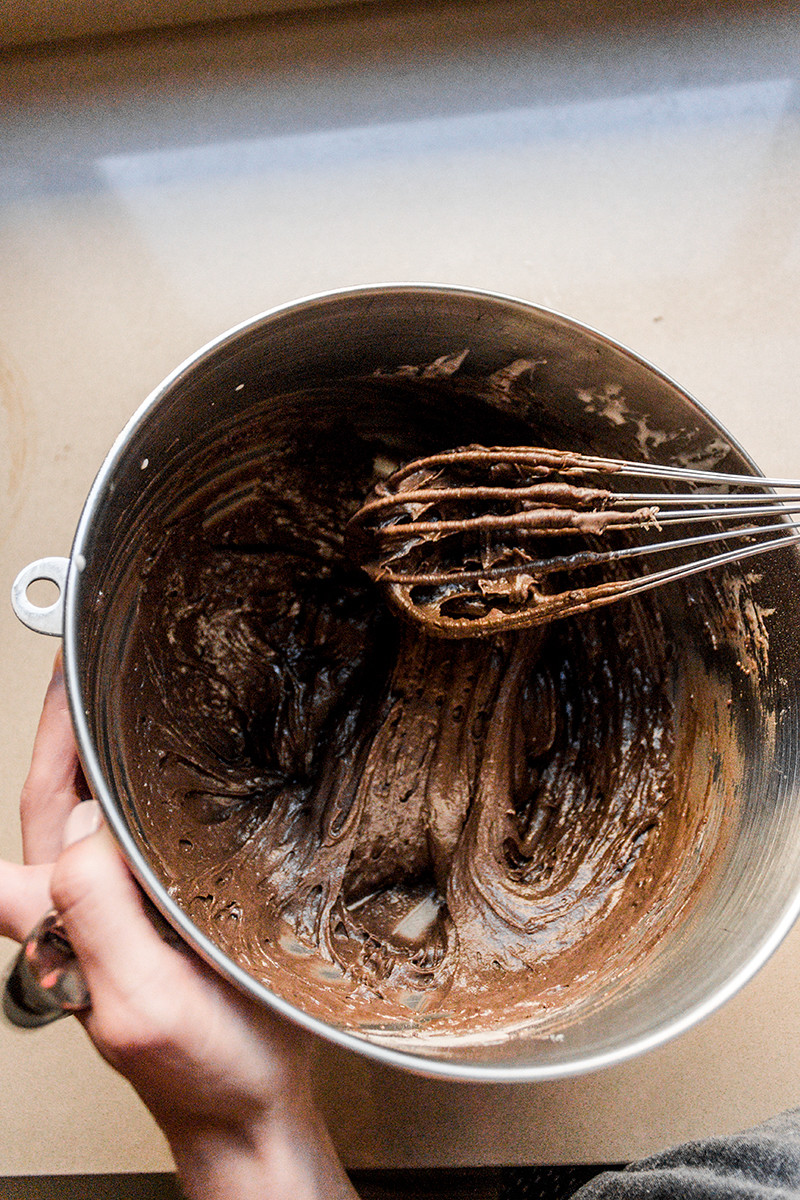 In a separate bowl place your eggs and salt. Start whipping the mixture, gradually adding the sugar. Continue whipping on high speed until the mixture is thick and the sugar has dissolved. 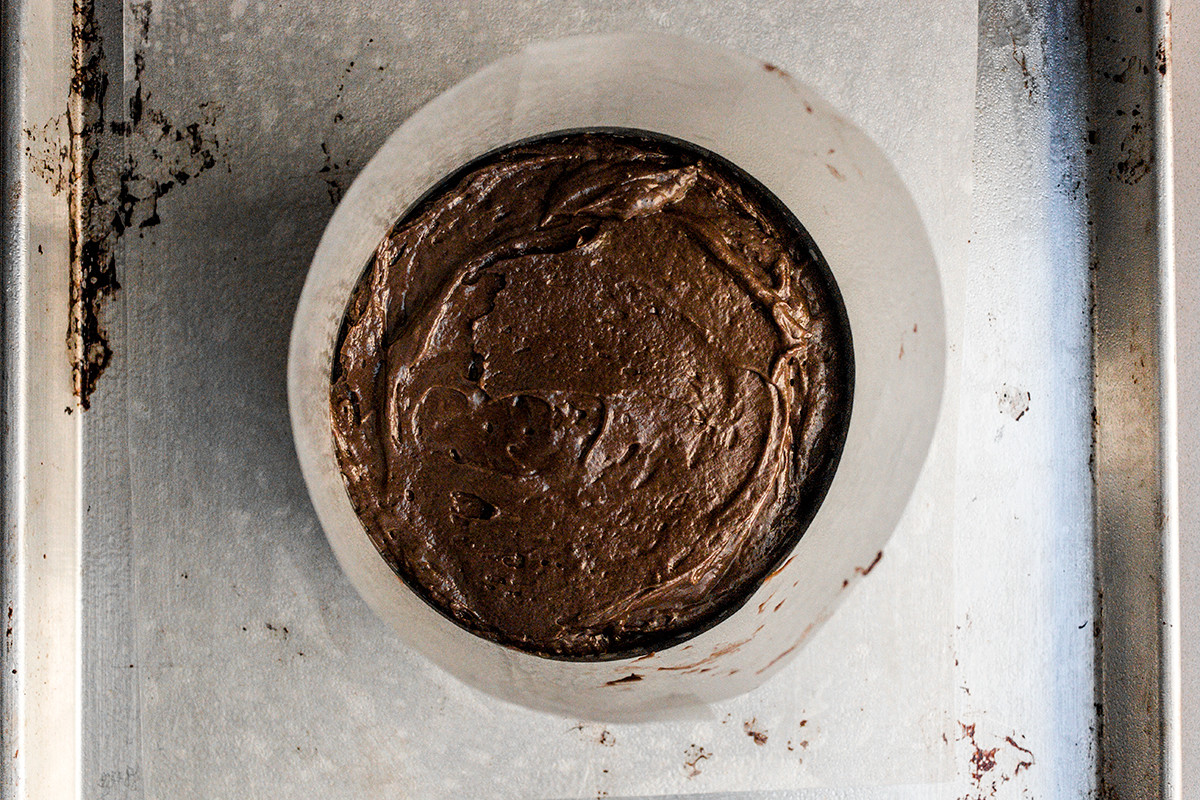 To this egg/sugar mixture, add the melted butter and kefir; whip for 15 more seconds, until homogenous. Add the dry mixture in two batches, and whisk until everything is incorporated.

Transfer the sponge mixture into a greased mold and level it with a spatula. Bake for about 1 hour or until the knife comes out clean. 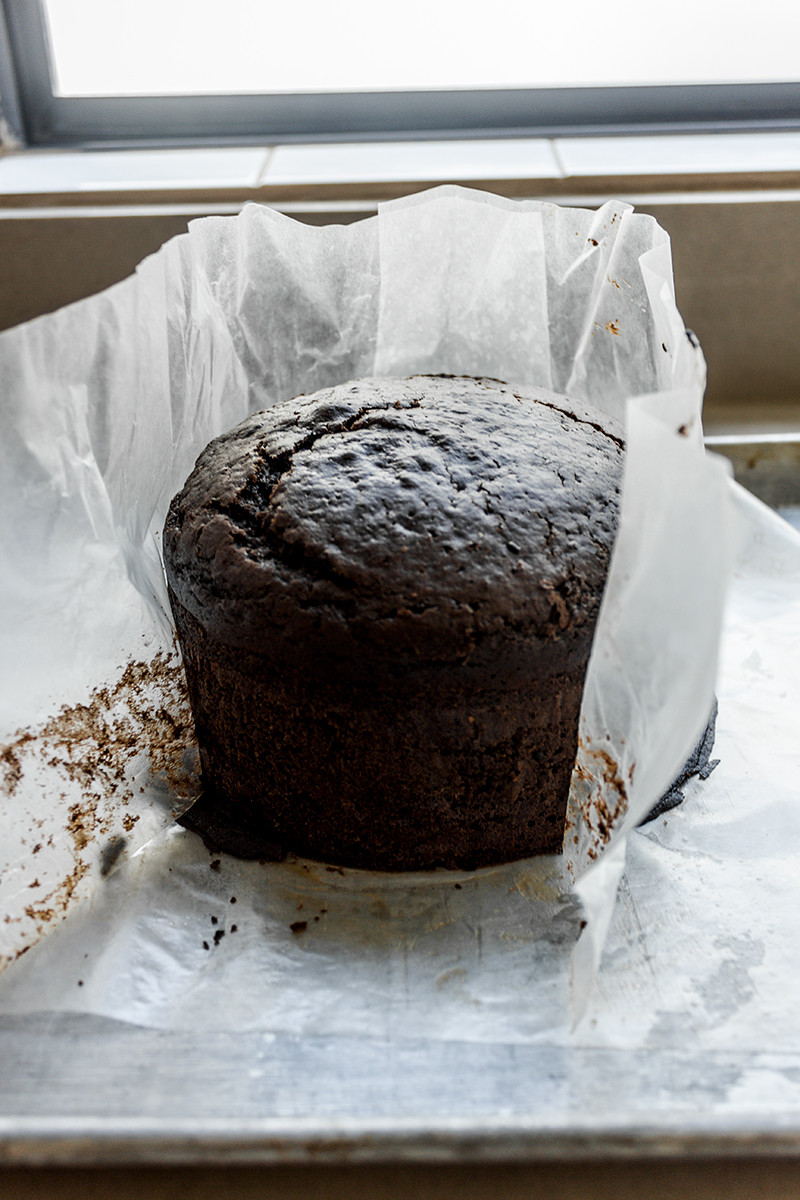 Let the sponge completely cool on a rack and then cut into 4 layers horizontally. 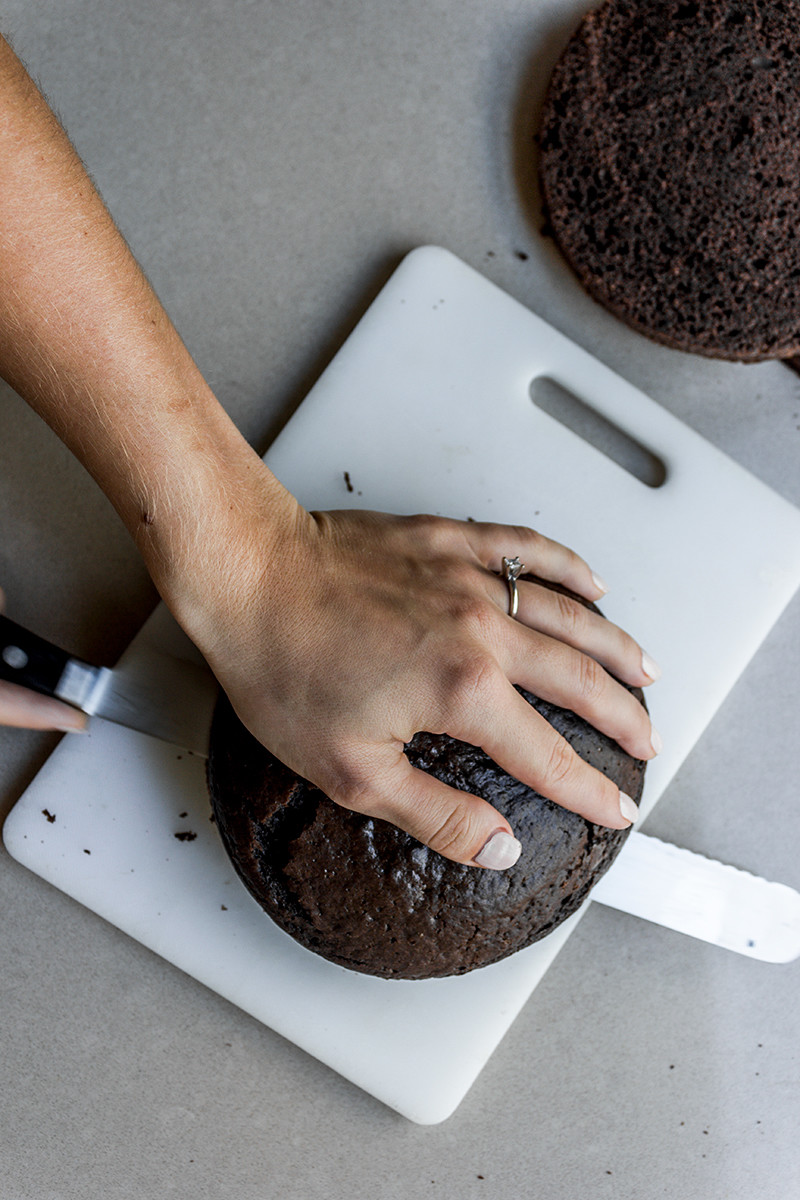 The top layer will have a rounded top; it’s the one you should use for decoration by cutting it into small squares or passing it through the meat grinder.​ 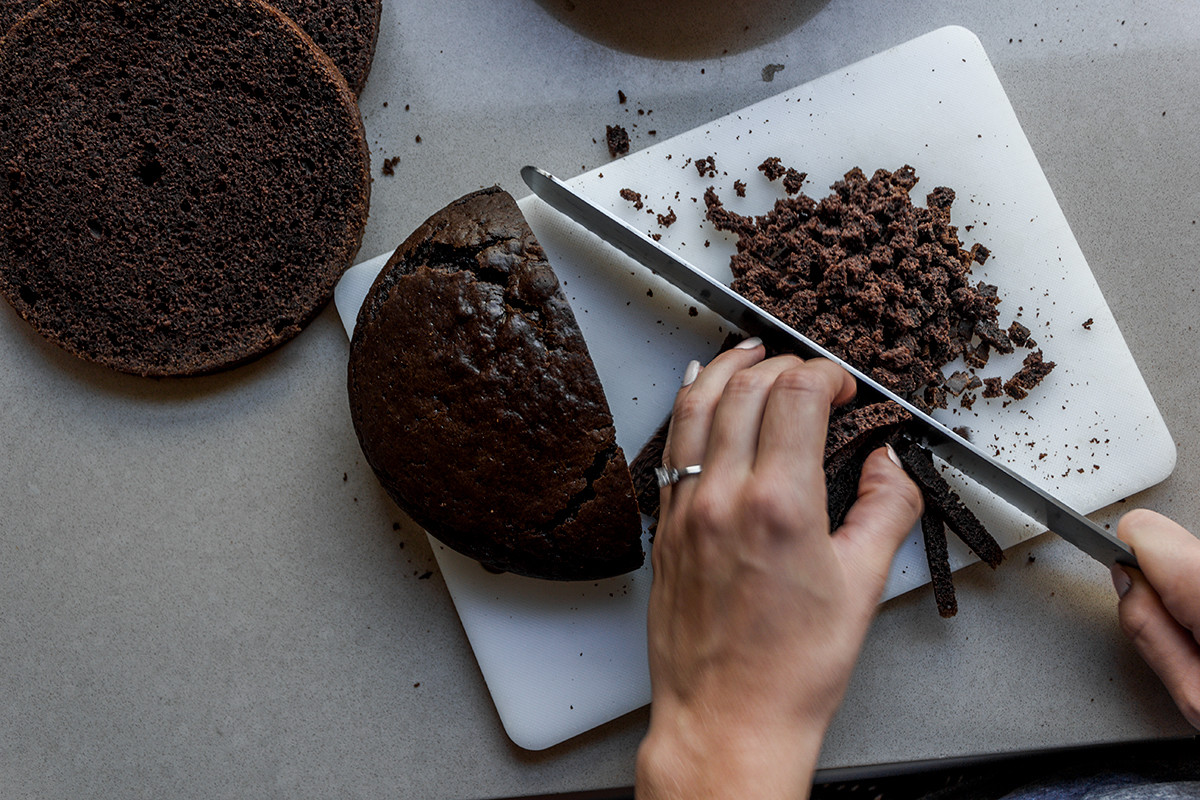 Bring the butter to room temperature and whip in a stand mixer. Add sour cream and sweet condensed milk, and whisk the mixture until homogenous. 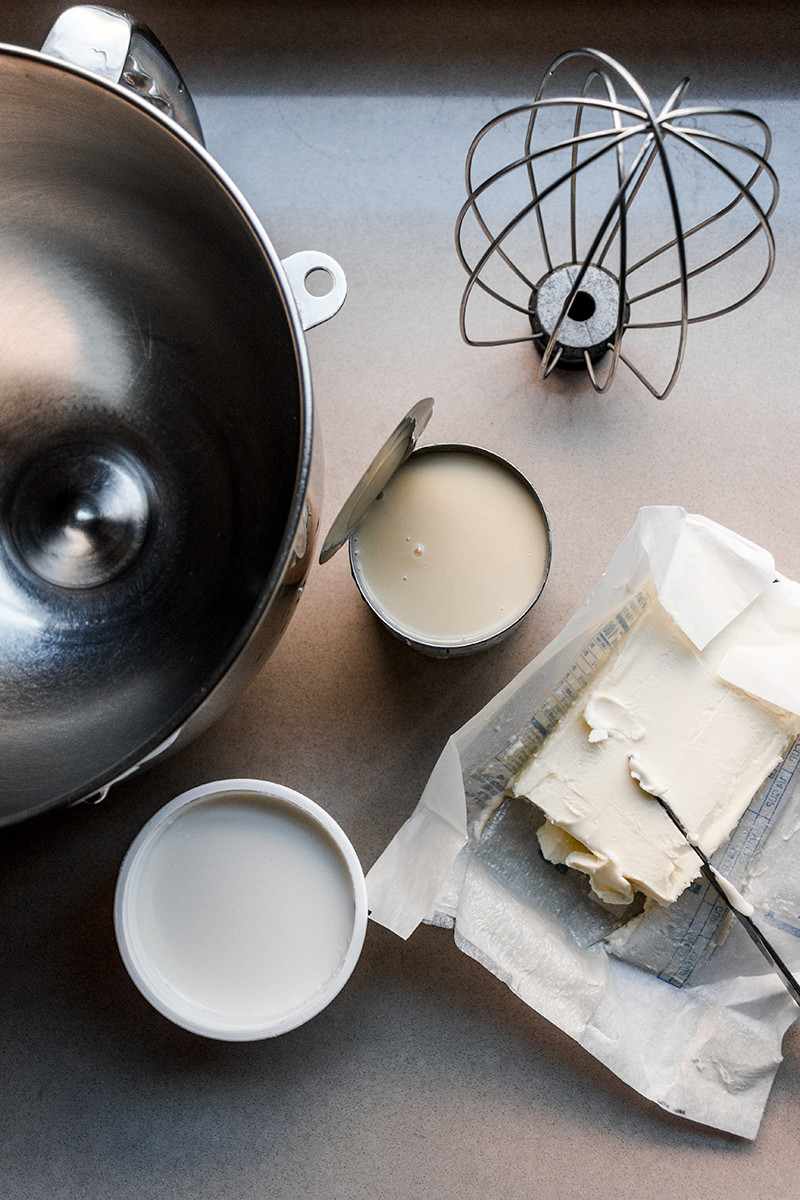 Now that your cream is ready and the sponge is cooled and cut, you can assemble your cake. 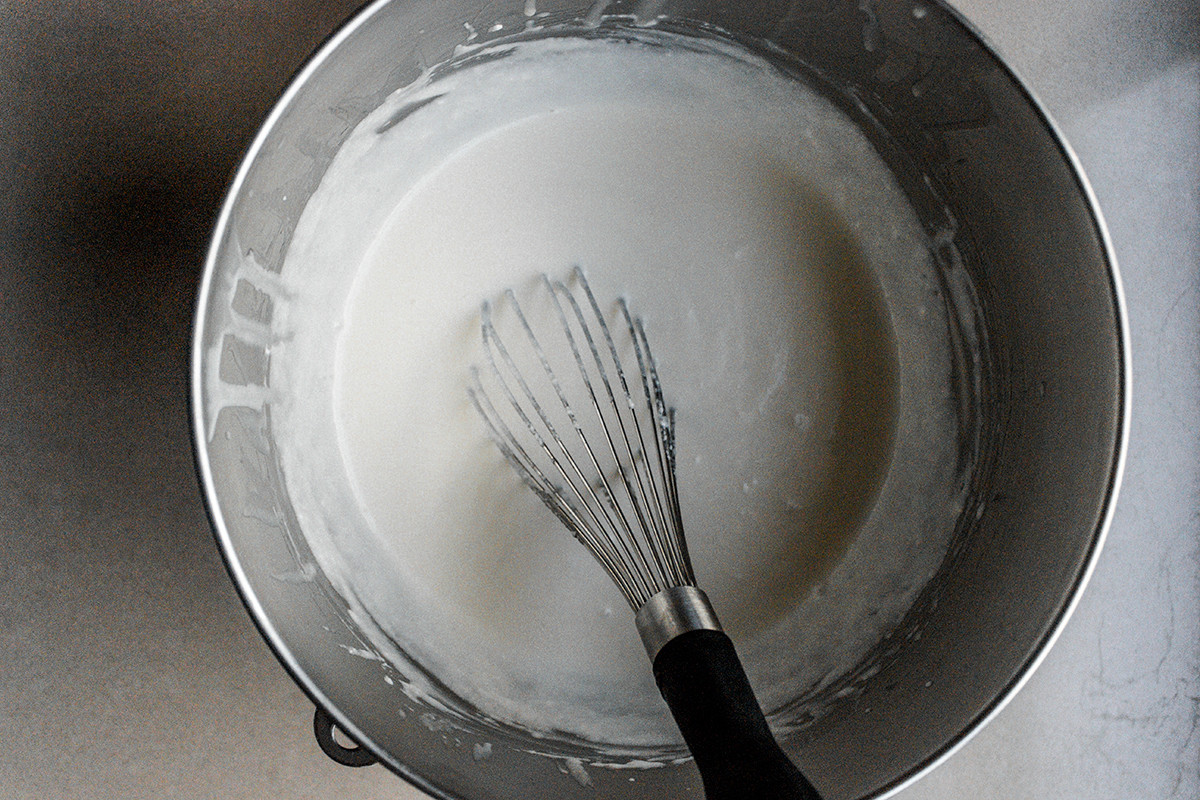 Layer the bottom sponge with the cream, place the second sponge on top and spread the cream again. 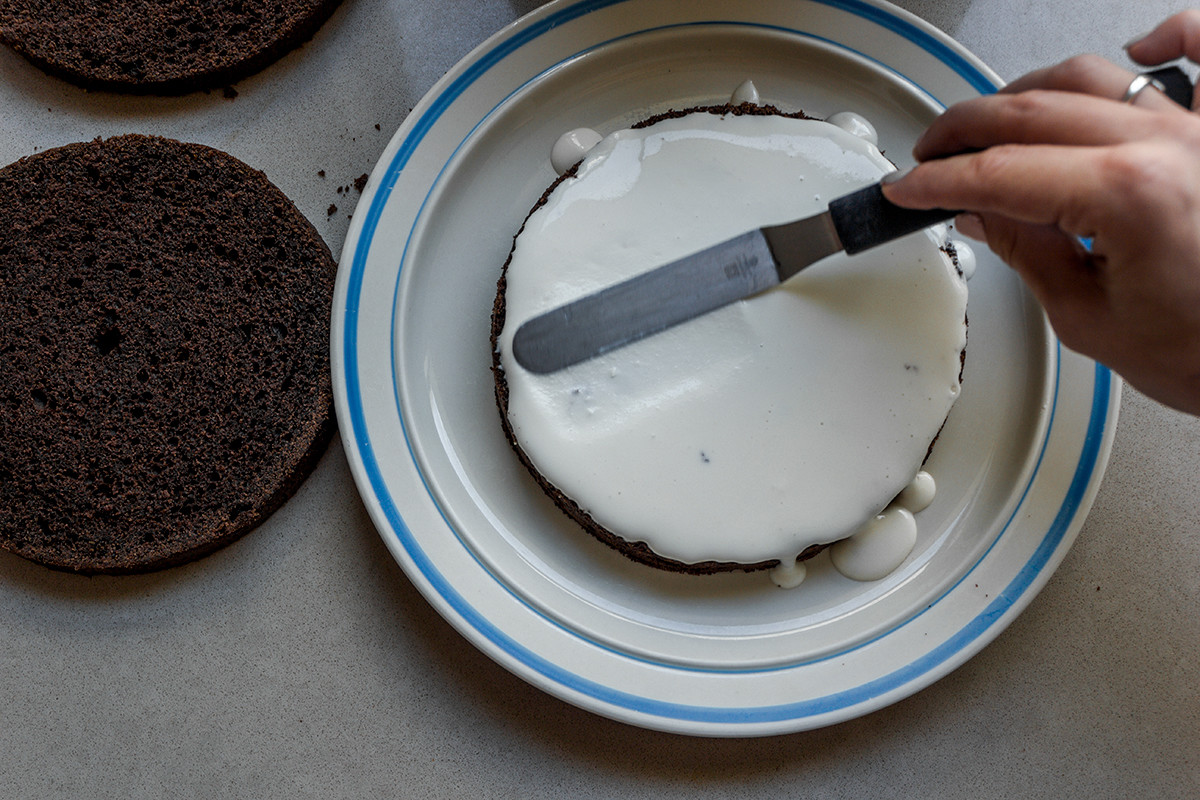 Put the third sponge on top and spread the rest of the cream on top and on the sides. Don’t worry if your cream is too liquid; it will set in the fridge and moisten your cake really good. 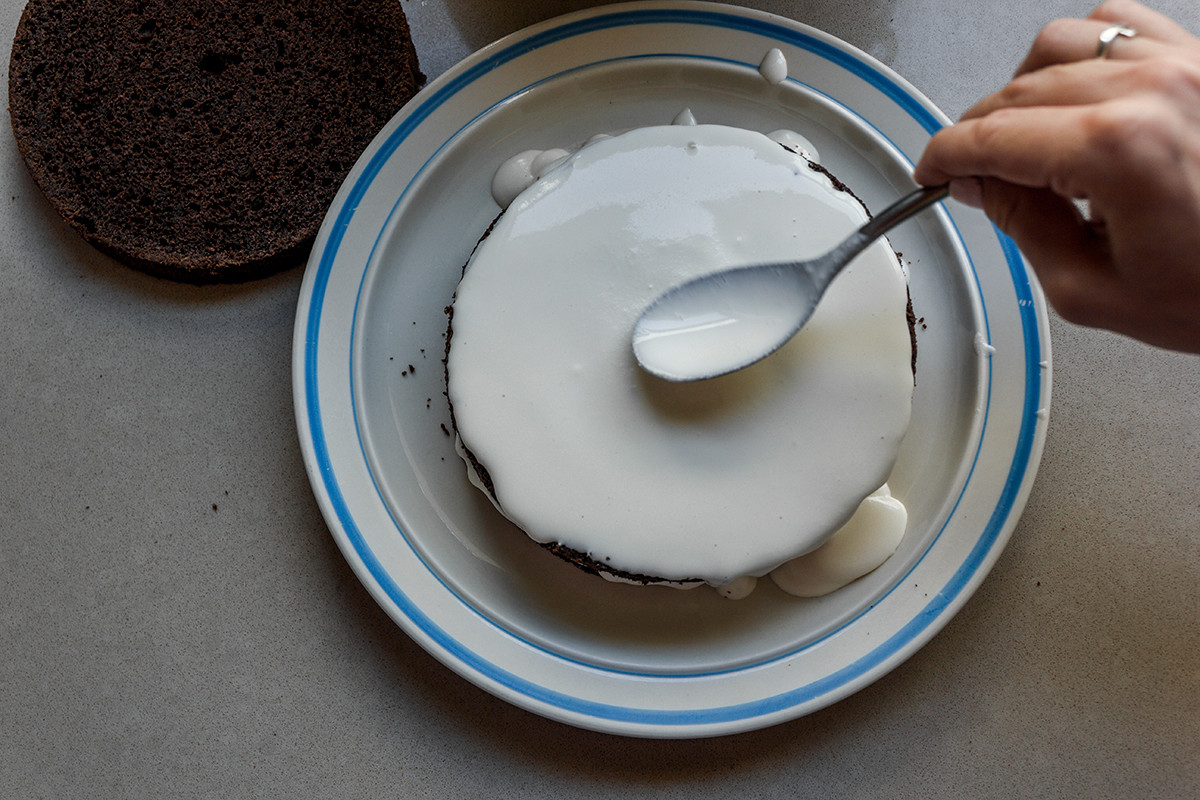 Finish the cake with chocolate crumbs on top and along the sides; it should stick to the cream easily. 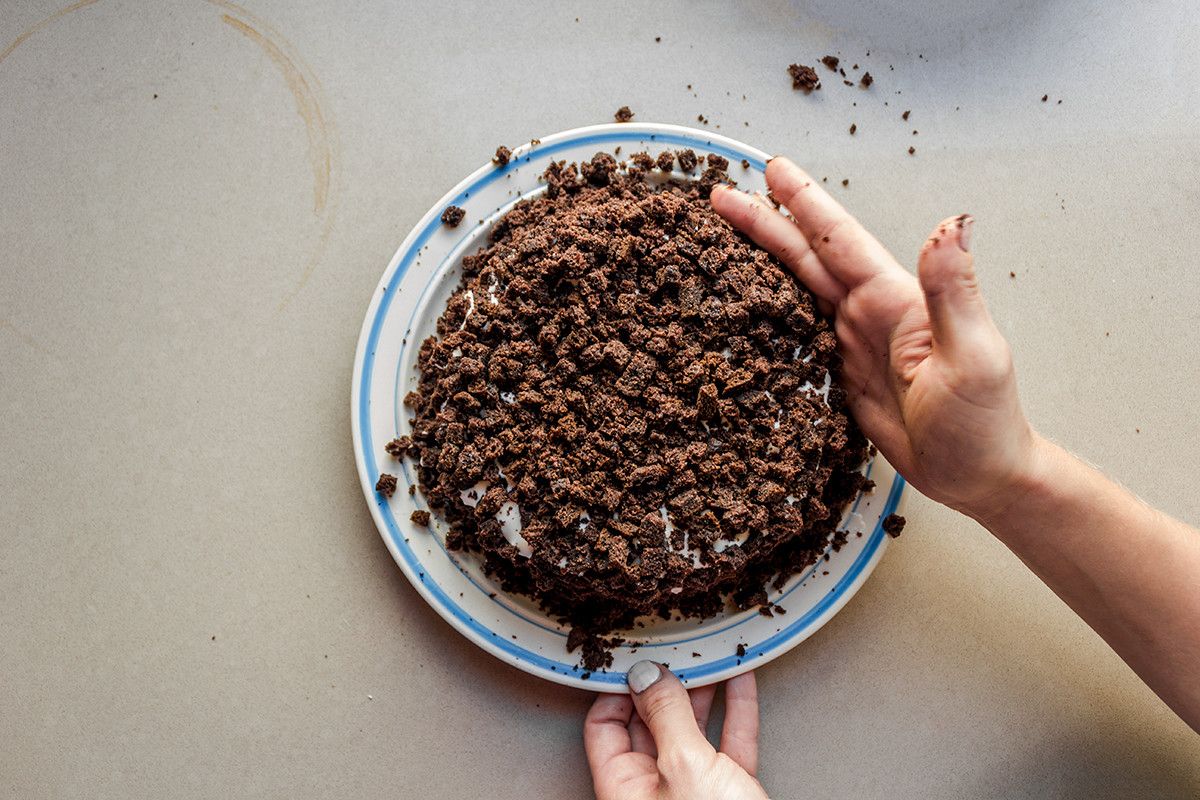 Let the cake sit in the fridge for at least 3 hours, and then enjoy! 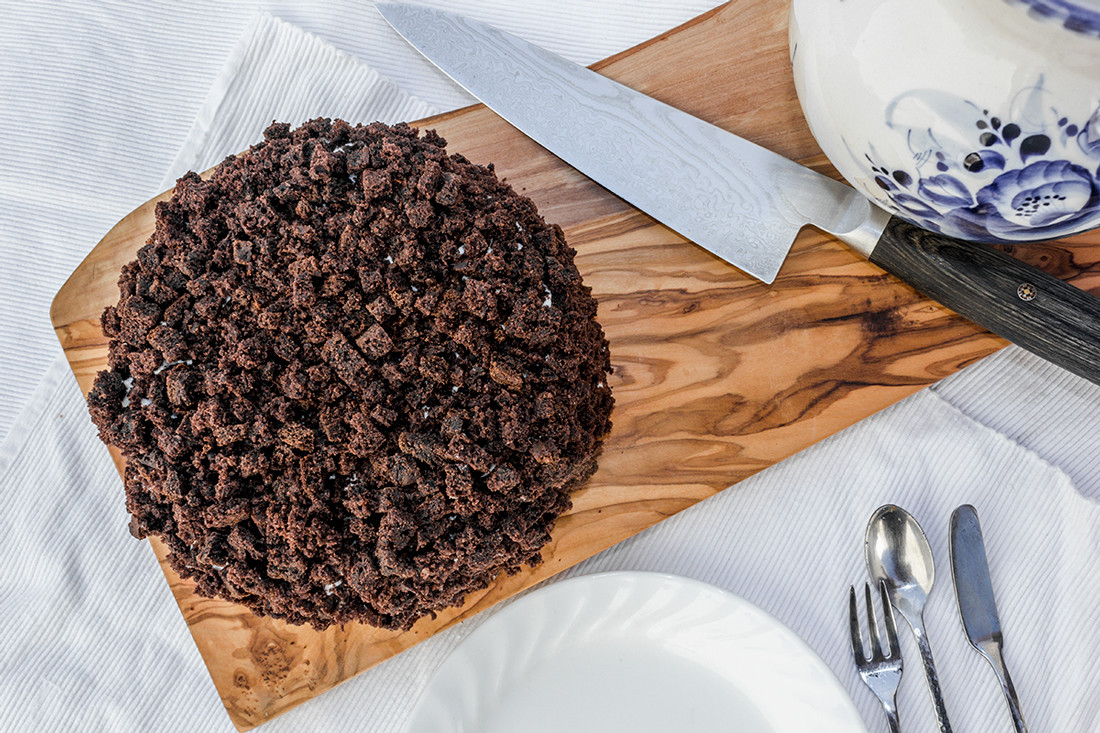