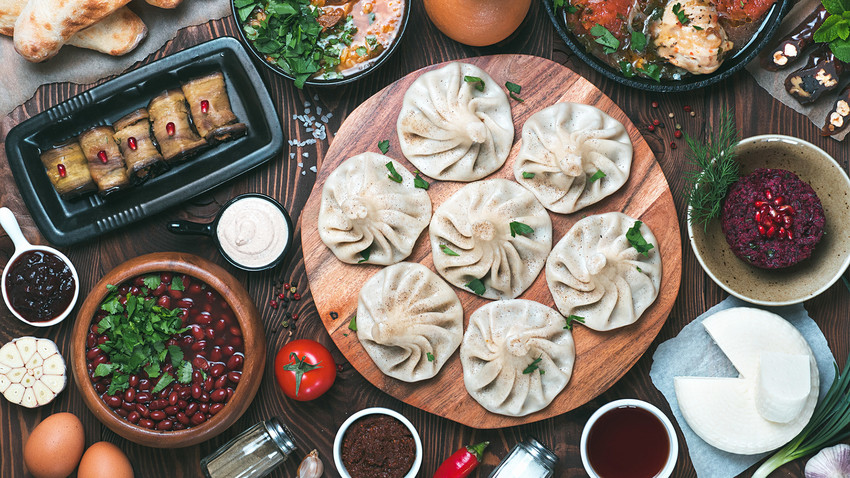 Legion Media
Russia is a culinary melting pot where the finest post-Soviet cuisine comes together. It’s time you sampled these foreign delicacies which Russians go crazy for, but remain massively underrated abroad.

Just as in any big cities, immigrants play a massive role in the Russian food industry. However, it’s not curries and Mexican food on street corners here – instead, most Russians actually stick to food from the former Soviet bloc to get their spicy/exotic fix. Here’s why – and how you can get into these overlooked gems for yourself.

A broad interplay of culinary exchanges along the Silk Road, Georgian delicacies combine the heartiness of Russian food and the flair of the Middle East to create a cuisine that's as exotic as it is unparalleled. The dishes are diverse, expressive, and very well-garnished, and can be served up at any time of day and for all tastes. As Alexander Pushkin himself wrote, “Every Georgian dish is a poem.”

It’s perhaps the world’s most criminally neglected cuisine outside of the former USSR, but many Russians in fact prefer Georgian food to their own. As a result, affordable Georgian restaurant chains like Vai me!, Jonjoli, and Khachapuri are among the most popular in Russia, while more up-market options are also well-visited.

Stumbling across Georgian food is also a seriously pleasant surprise to most foreigners in Russia – especially if they’re finding the host cuisine a little too, well, dill-infused. 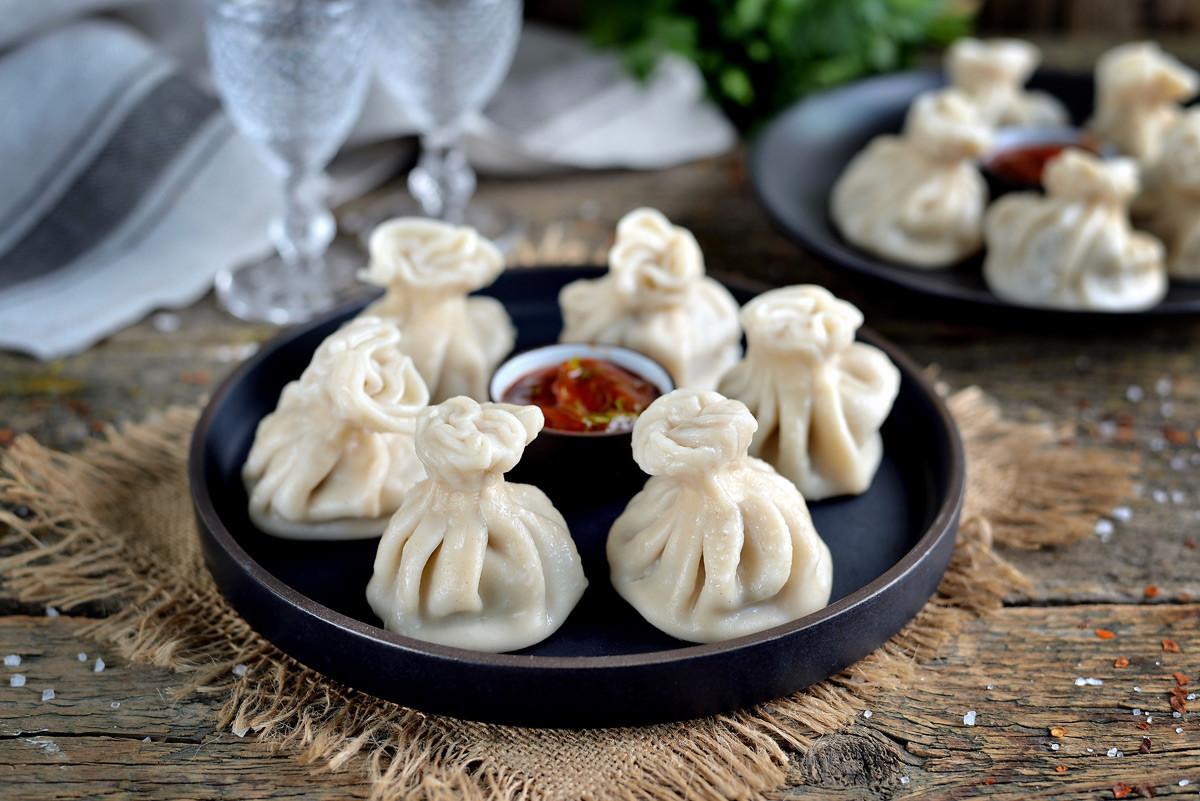 The absolute staple. These delicious boiled dumplings can be stuffed with meat, potatoes, mushrooms, or cheese, and always filled with lots of stock. Seek advice before eating them, however – this is a cutlery-free dish, and you need to drink the stock before biting into the meat (otherwise it’ll go everywhere). 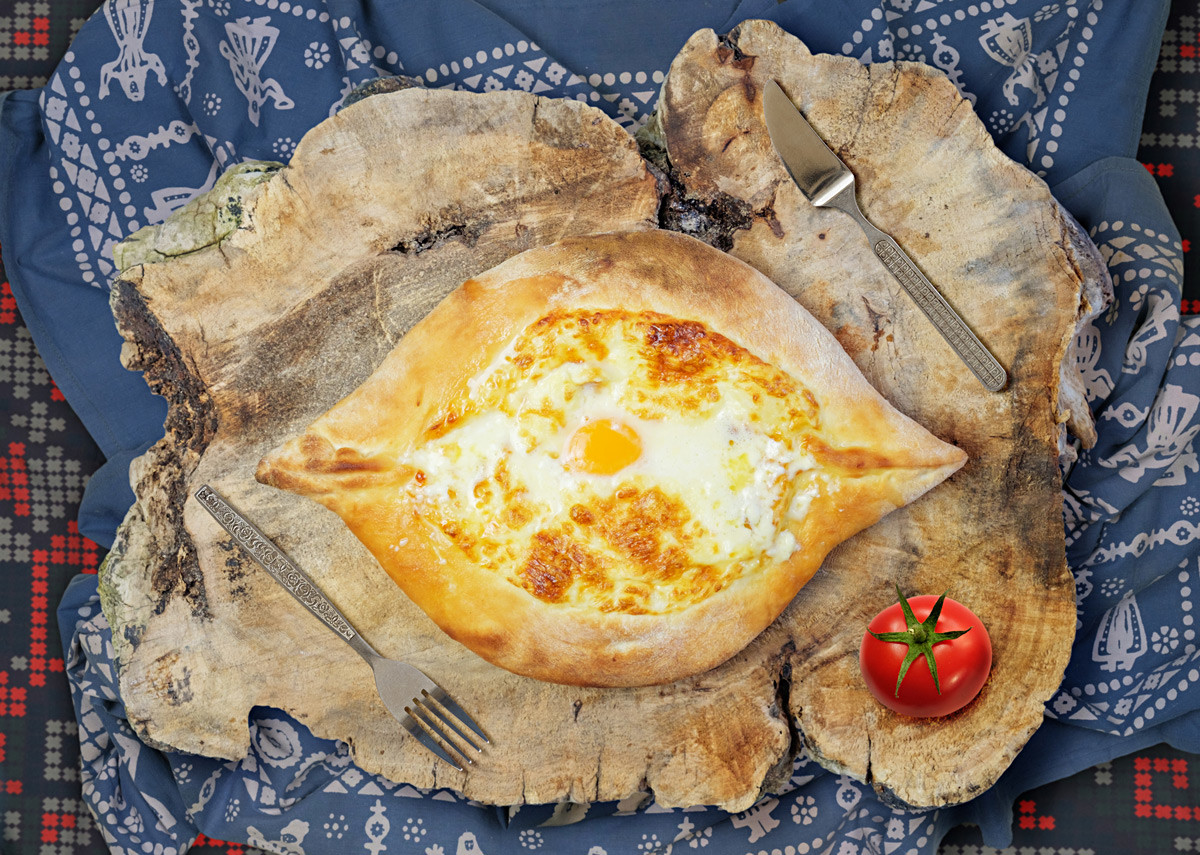 Georgia’s most traditional dish and a reflection of how diverse the cuisine is. The basic principle is that it’s a flatbread filled with cheese, but there are hundreds of different ways to serve khachapuri. Among the most traditional ways are with kidney beans and bacon, while the Adjarian version, with a floating egg on top, is just as popular. Basically a Caucasian pizza. 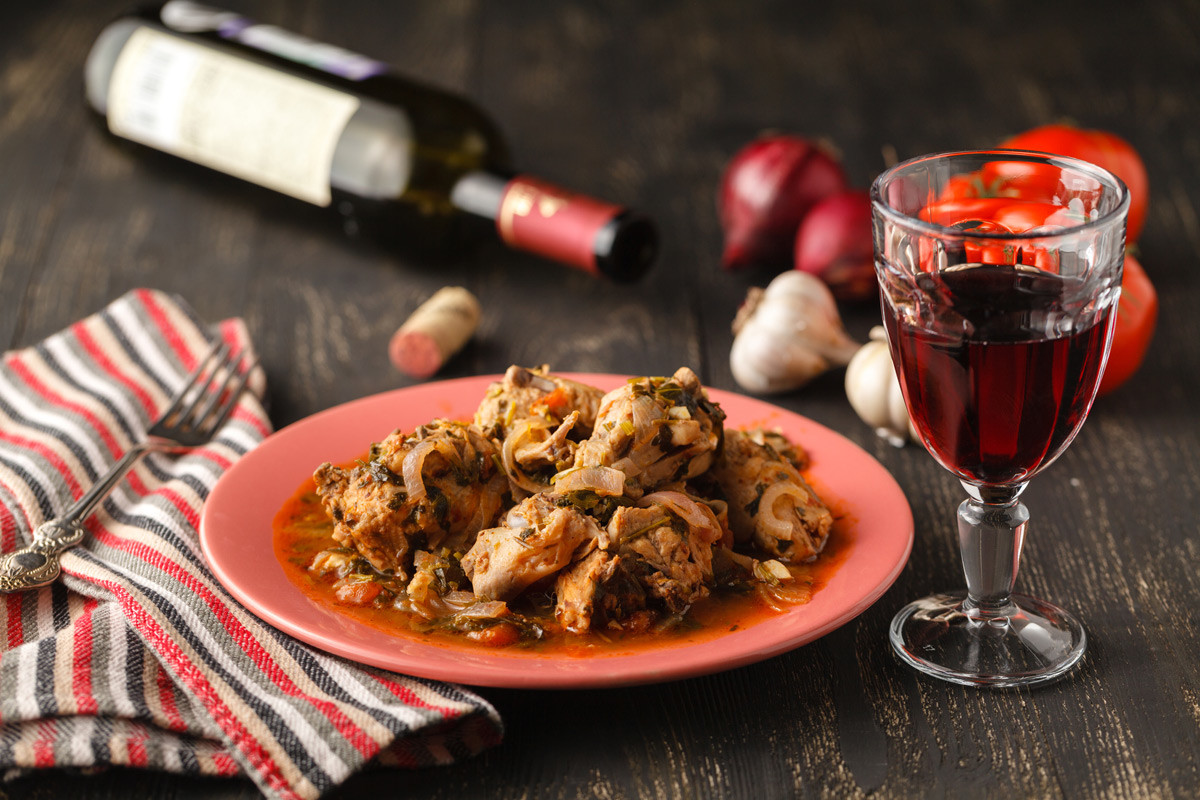 Essentially a chicken and tomato stew, but with a complex blend of spices called khmeli-suneli that makes it completely unique: The mix includes marjoram, dill, thyme, parsley, coriander, and basil, among other things. 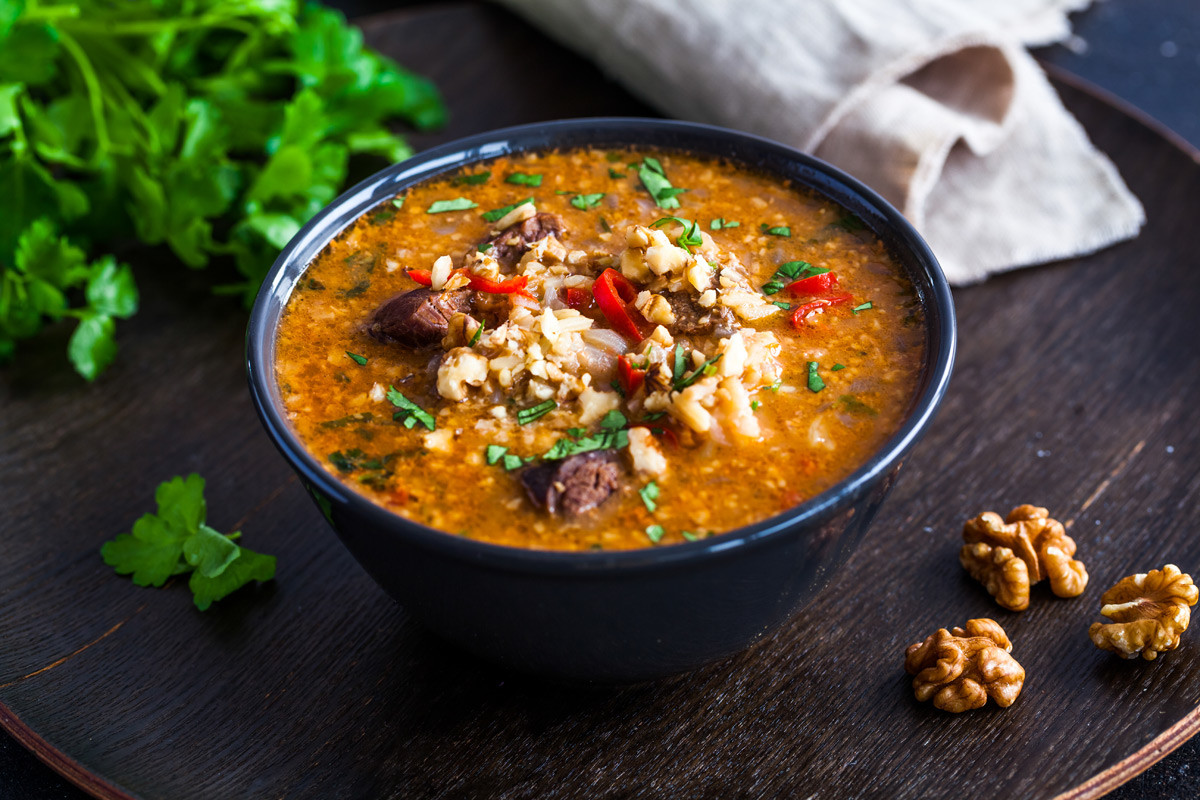 Somewhere between a tomato soup and a curry, this meaty broth is best served laden with vinegar, rice and spices. A true kharcho must be extremely spicy. 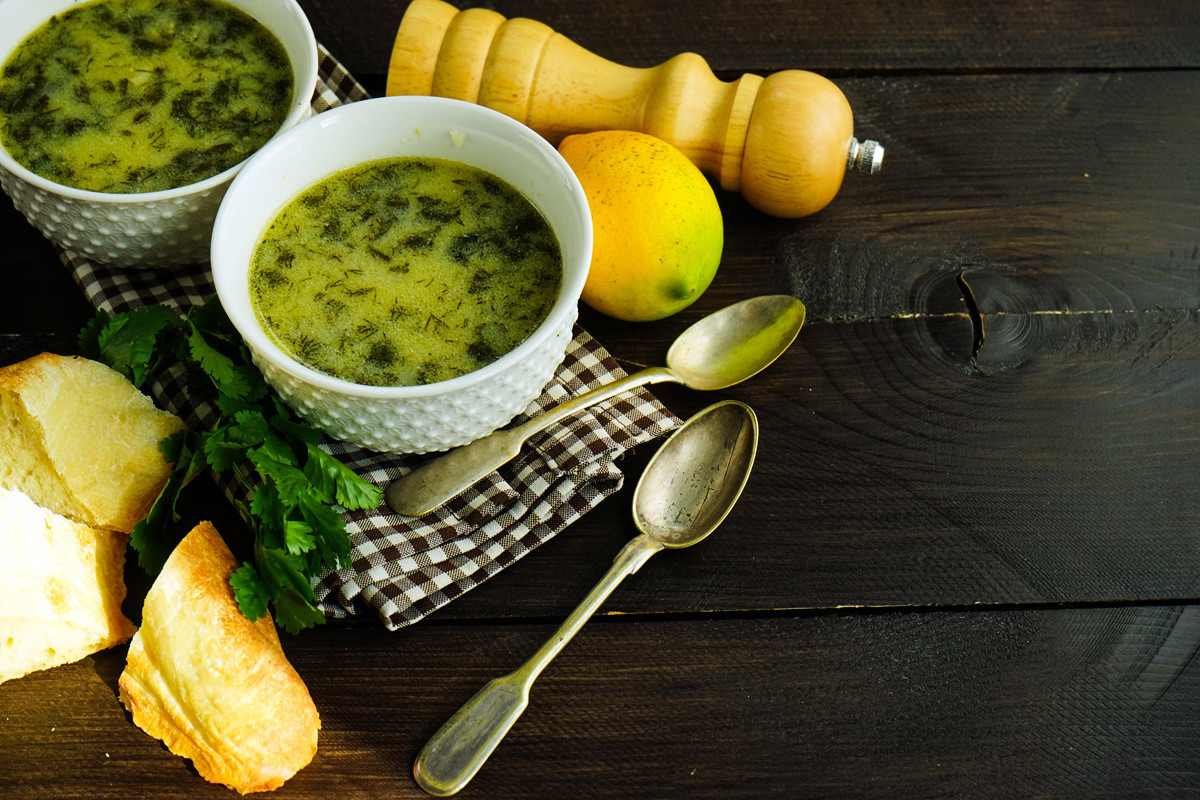 A light broth often served with chicken, this soup is usually flavored with cinnamon, lemon, and garlic. It’s often served inside the emptied crust of a loaf of bread. 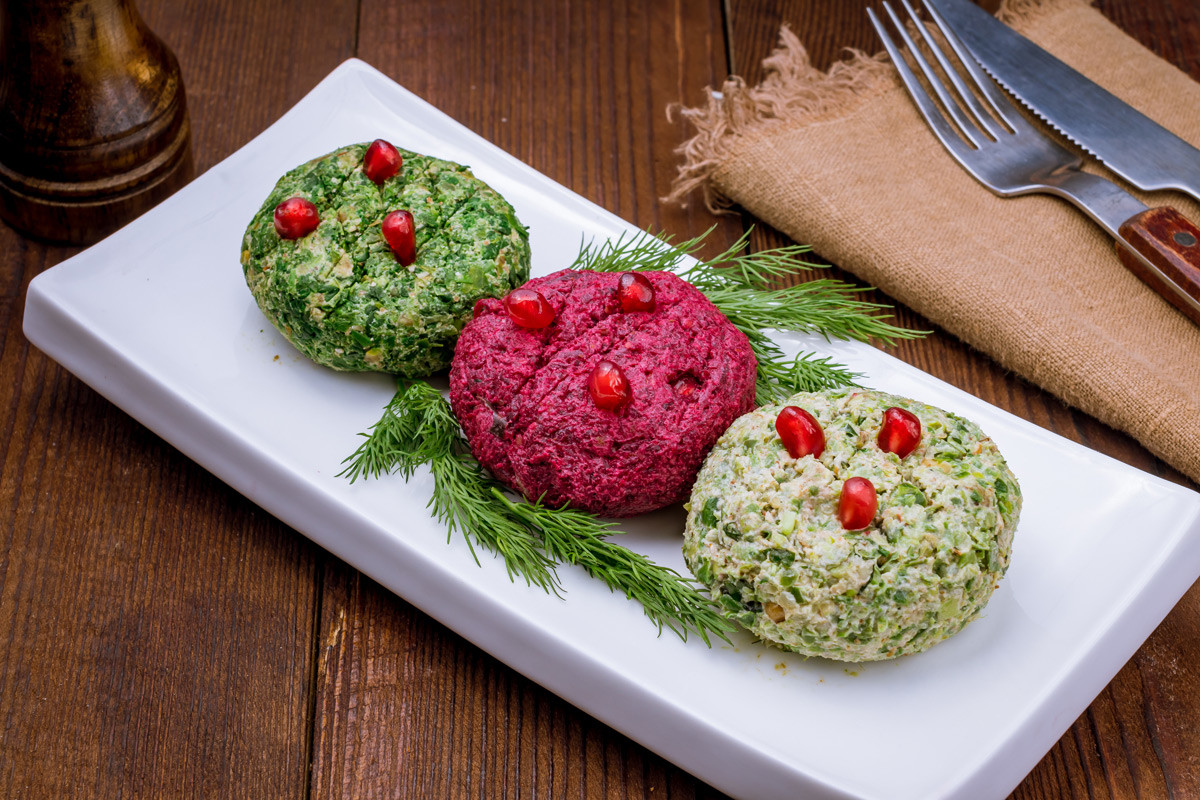 A thick, firm paste of ground vegetables, usually served in small portions and decorated with pomegranate seeds. The most popular pkhali ingredients are spinach, beetroot, and eggplant. 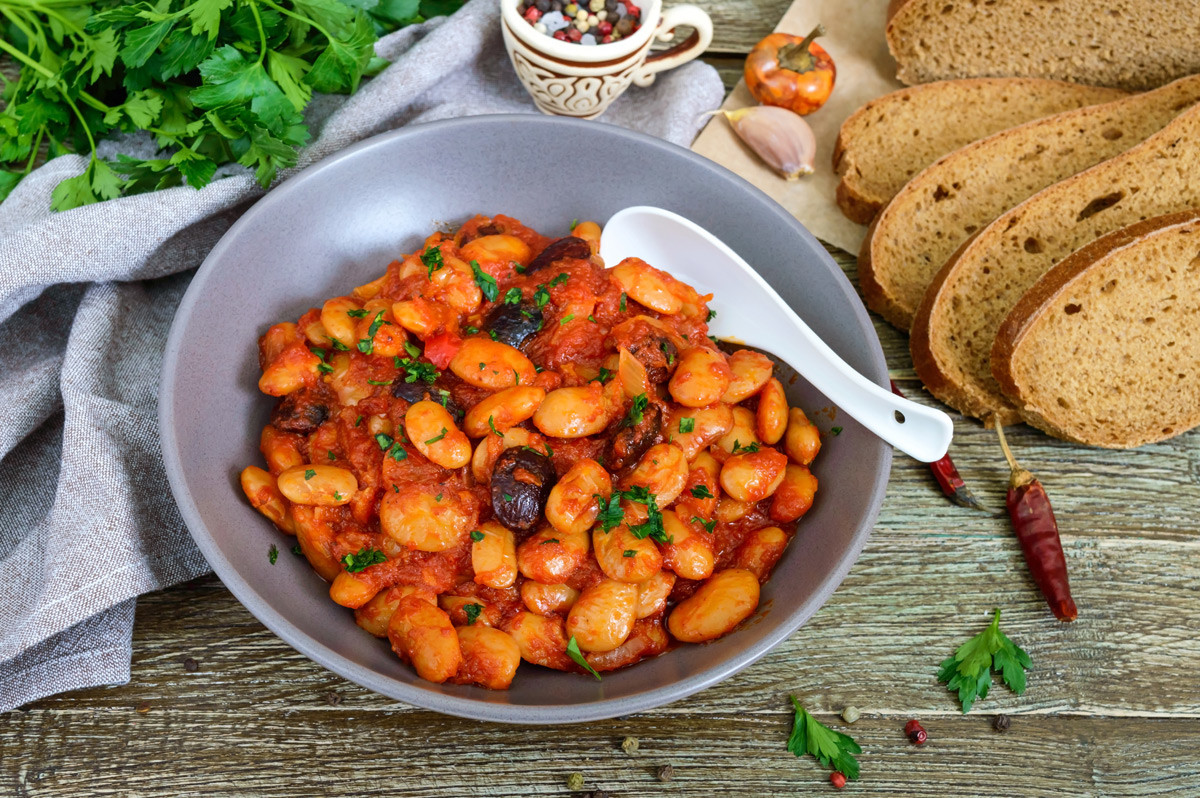 A simple, tasty mix of kidney beans, garlic, and herbs that’s hard to get wrong. Often served with chunks of pork.

The culinary tradition of Uzbekistan, situated in Central Asia, is defined by its relationship to meat – unlike its nomadic neighbors, Uzbekistan has been civilized for a long time and has been particularly proficient in farming sheep and horses. The result is therefore extremely hearty food, which also incorporates some aspects of Turkic, Tatar, and Mongolian spicing and eating methods (Uzbek cuisine is very hands-on, since most eat it on the floor by a low table). Tandoor oven-cooked bread is also a key feature of the cuisine.

Weddings are the defining showcase events of Uzbek food culture – as a result, many Russians go to Uzbek restaurants to check out a more ornate environment, not unlike a wedding itself. Think exquisite carpets and shisha, that kind of thing. However, street-food versions of Uzbek cuisine, such as Chaihona No 1 or Plov, are also popular here. 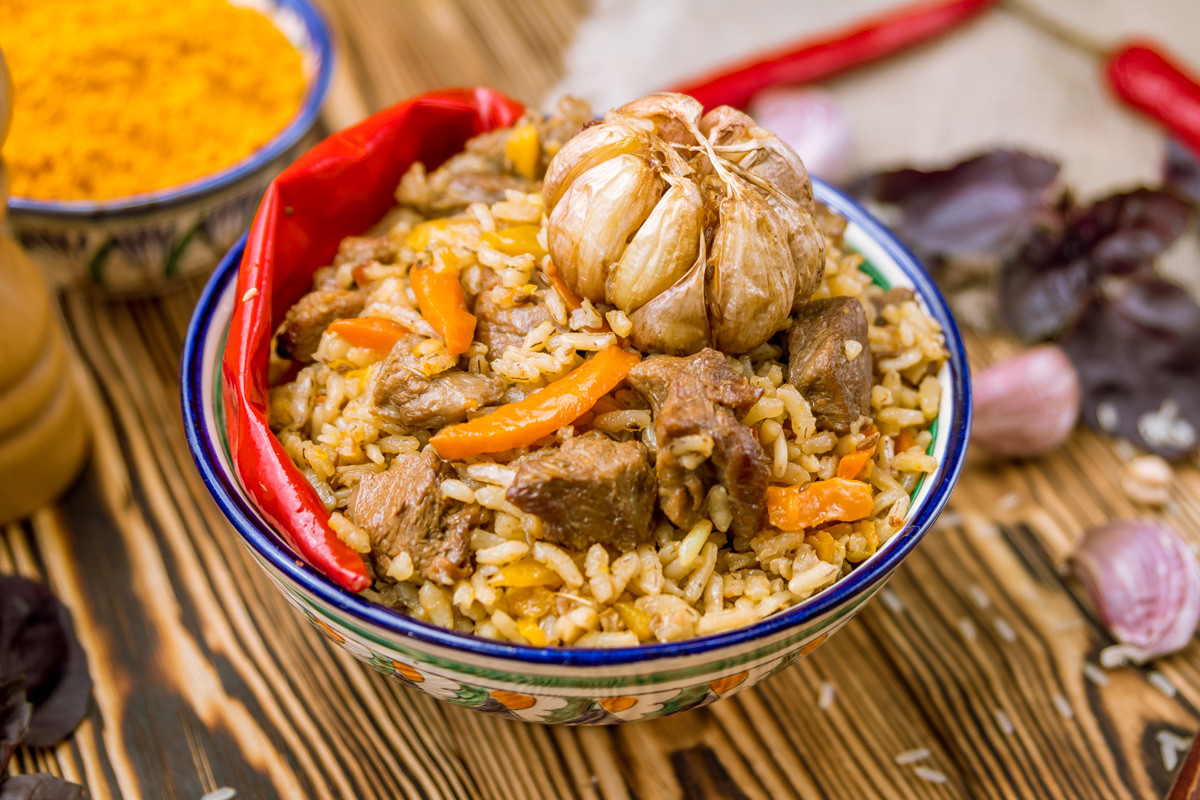 Uzbekistan’s signature dish, often called “pilaf” in English, is known around the world. A delicious rice dish cooked with tender meat, onions, carrots, and raisins, it is easily prepared in large quantities, and is a staple of any Uzbek wedding. 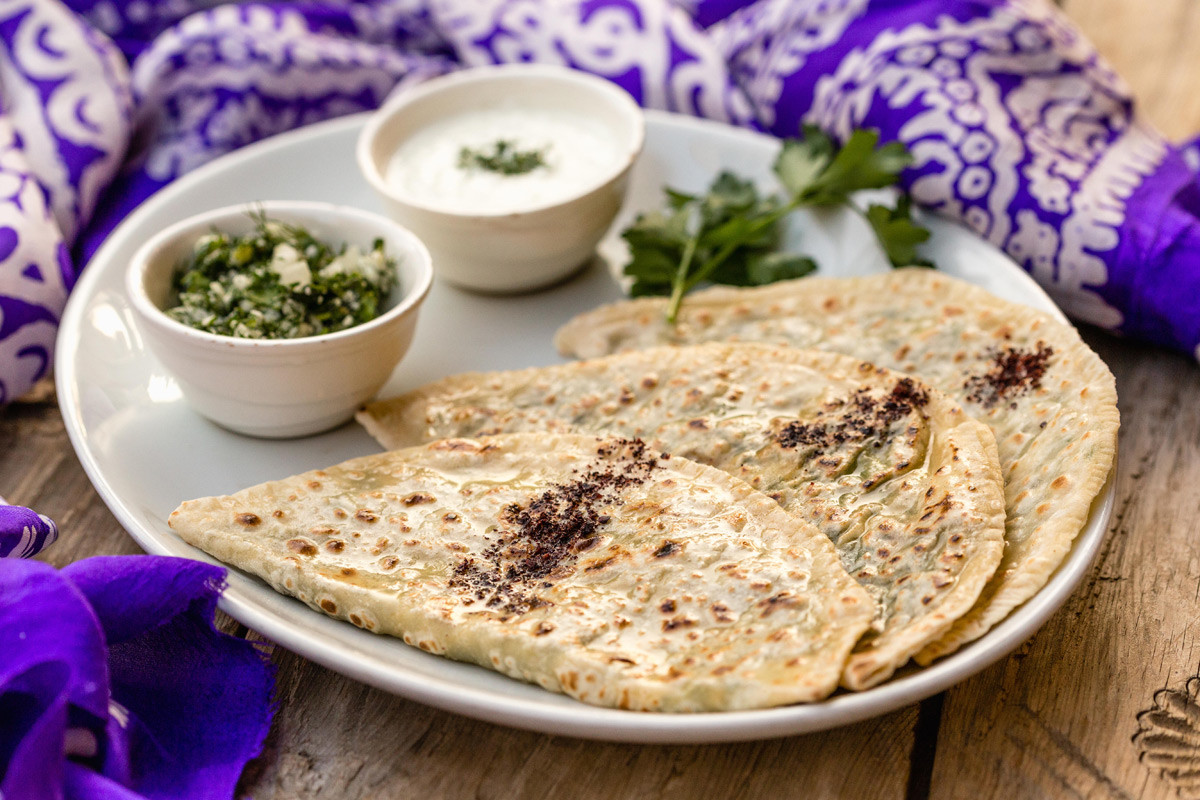 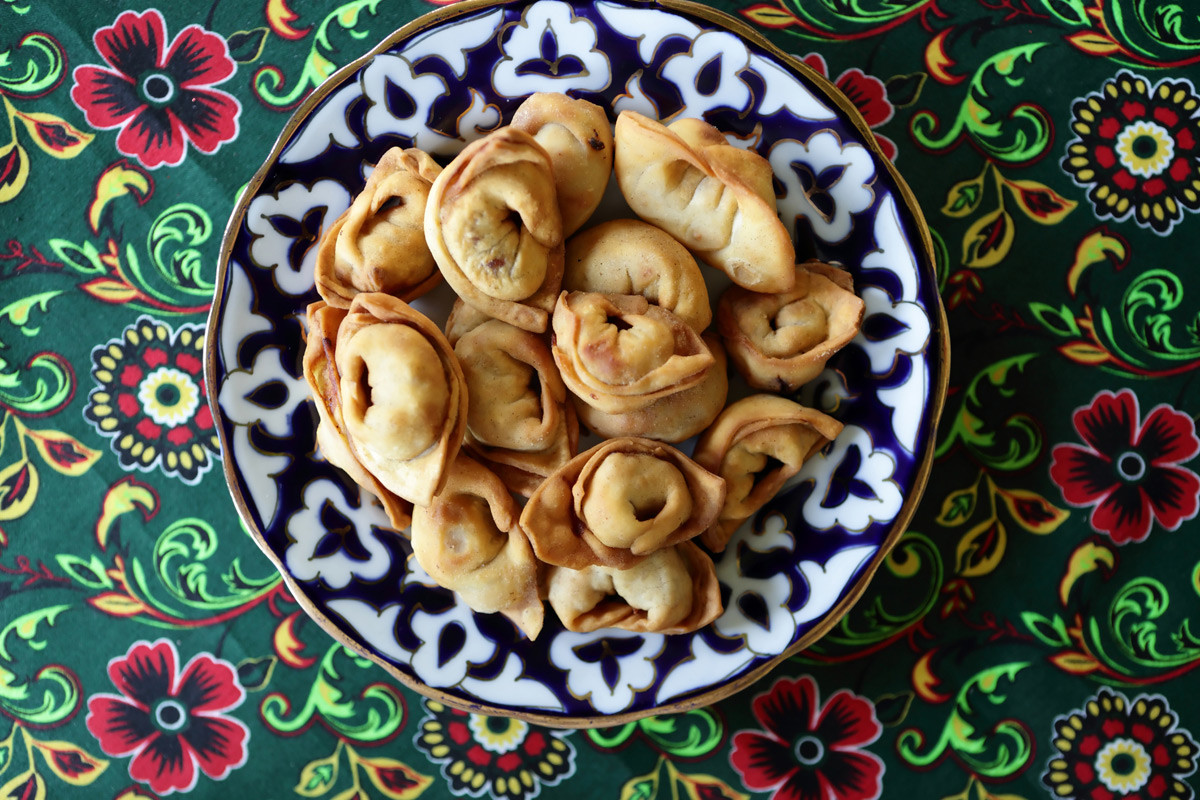 Often called berek, these small but fiery deep-fried dumplings are filled with spicy meats, pastes, and sauces that really pack a punch. They can also be served in stock and sour milk to make a delicious soup. 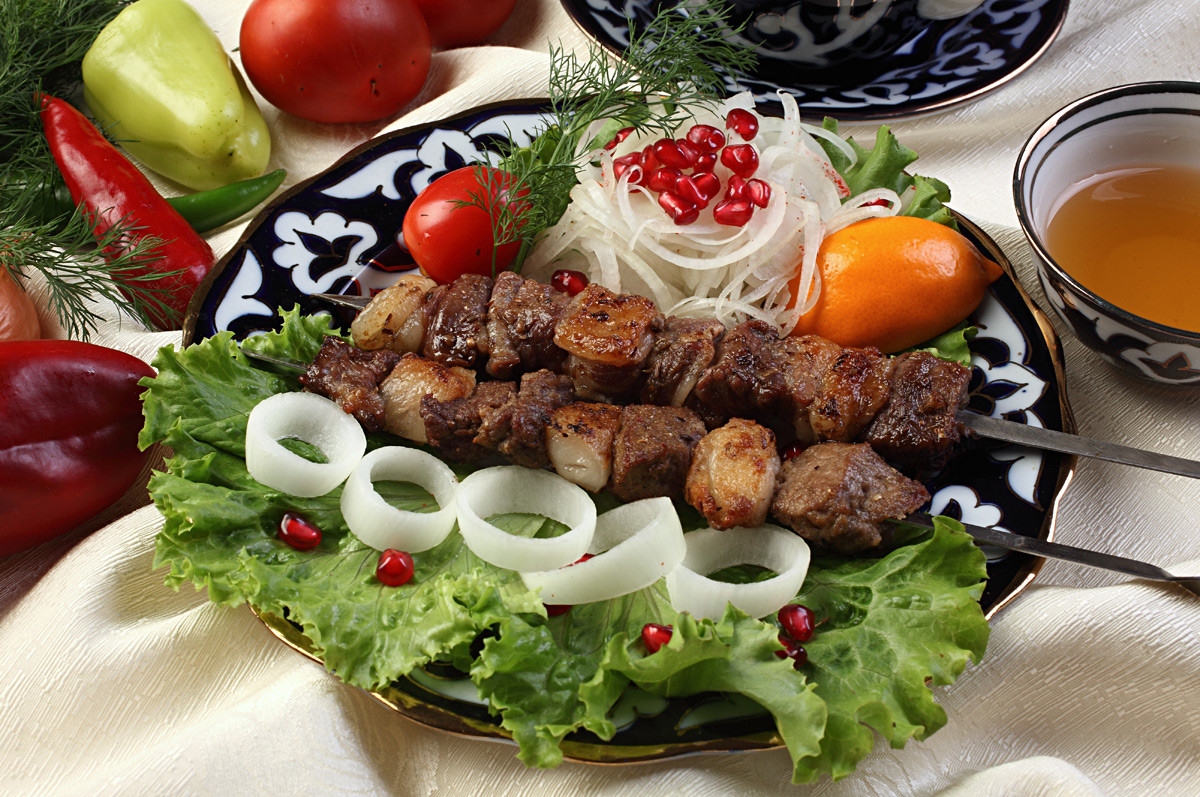 A kind of barbecued kebab, this skewered meat is also a common feature of many other post-Soviet cuisines, especially from the Caucasus and Central Asia. The Uzbek version tends to be served with onions and Adjika, a spicy red paste made from hot peppers. 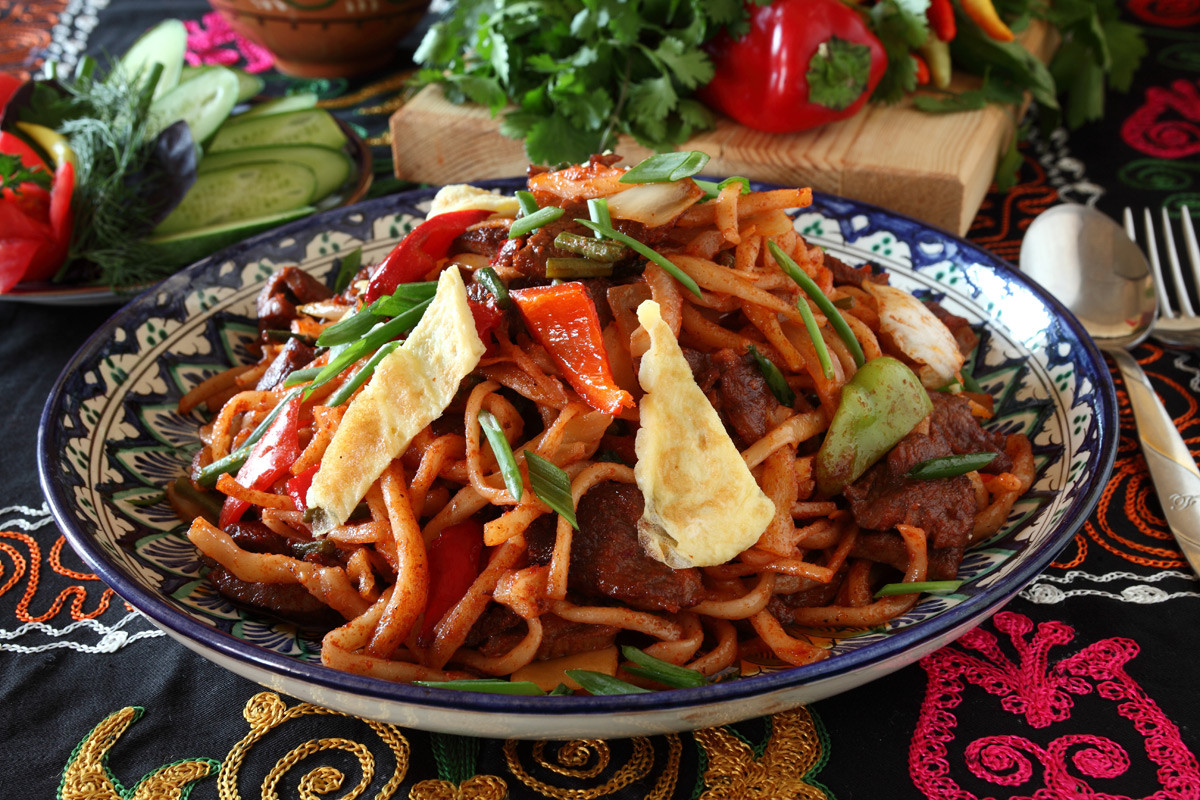 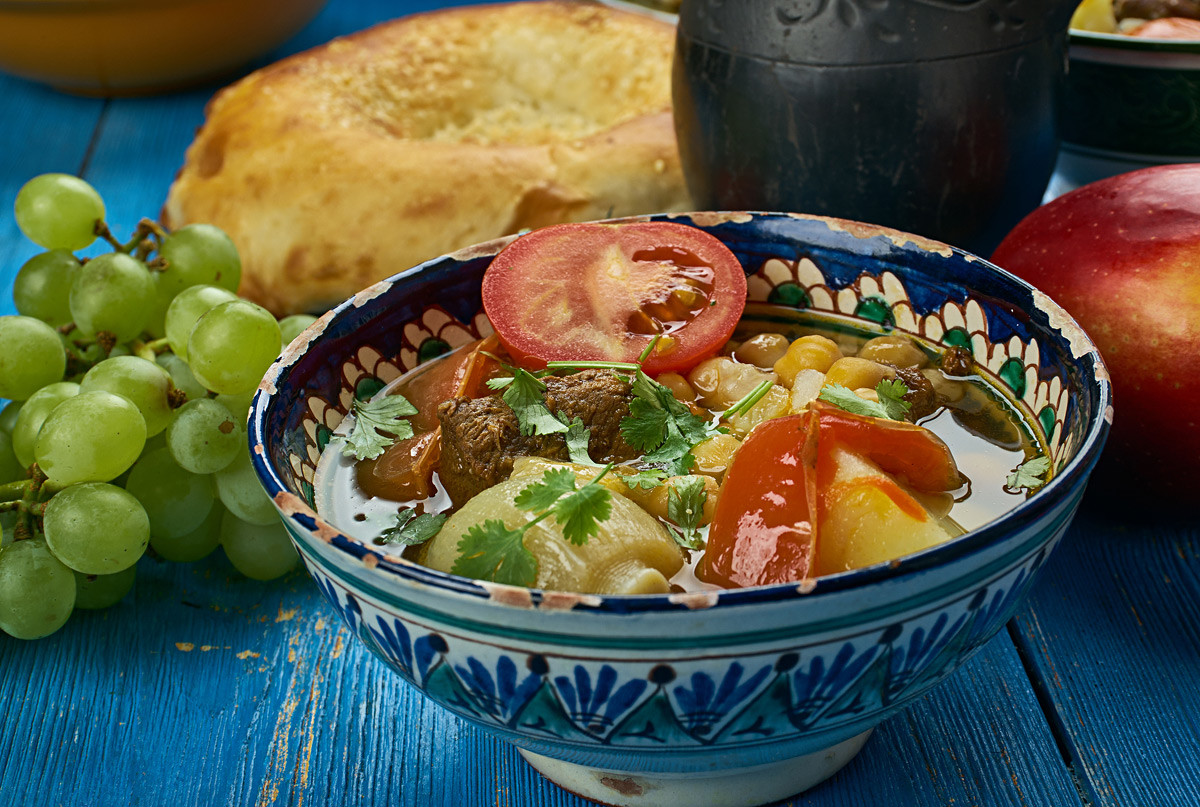 More like a meaty stew than a soup, this delicious dish is typically filled with potato, meat, onion, and tomato, but varies from region to region.

Russians who are feeling a little less adventurous but want a slight change from their home-cooked meals often consider Ukrainian restaurants a safe bet. After all, almost by default due to the inextricable links between the two, Russians and Ukrainians share many culinary traditions – be it the practice of pickling vegetables (stemming from Soviet food shortages), or the ways in which both countries have a series of near-identical dishes they both consider to be “their own.”

While trips to popular Ukrainian restaurants such as Odessa Mama or Taras Bulba don’t tend to force Russians too far out of their comfort zones, there are some undoubted discrepancies between the two cuisines (not least due to Ukraine’s previous occupations by Poland and the Austro-Hungarian Empire). As sort of a bread-heavy halfway house between Europe and Russia, Ukrainian cuisine gives you the best of both worlds. 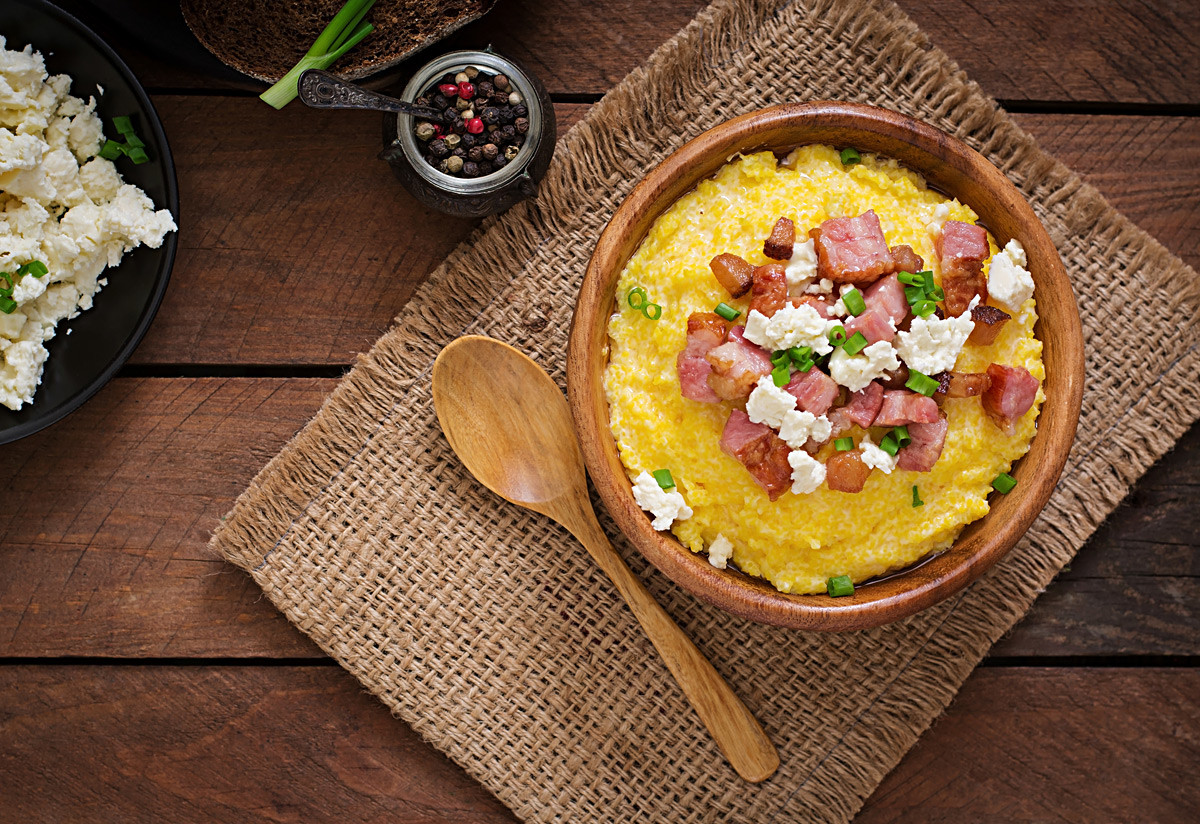 Originating in Carpathian Ukraine, this creamy dish has traditionally been fuel for the region’s shepherds. Traditionally cooked on a stone fire and laden with corn flour, cheese, sour cream, and white mushrooms, it’s sure to get you as energized and productive as possible. 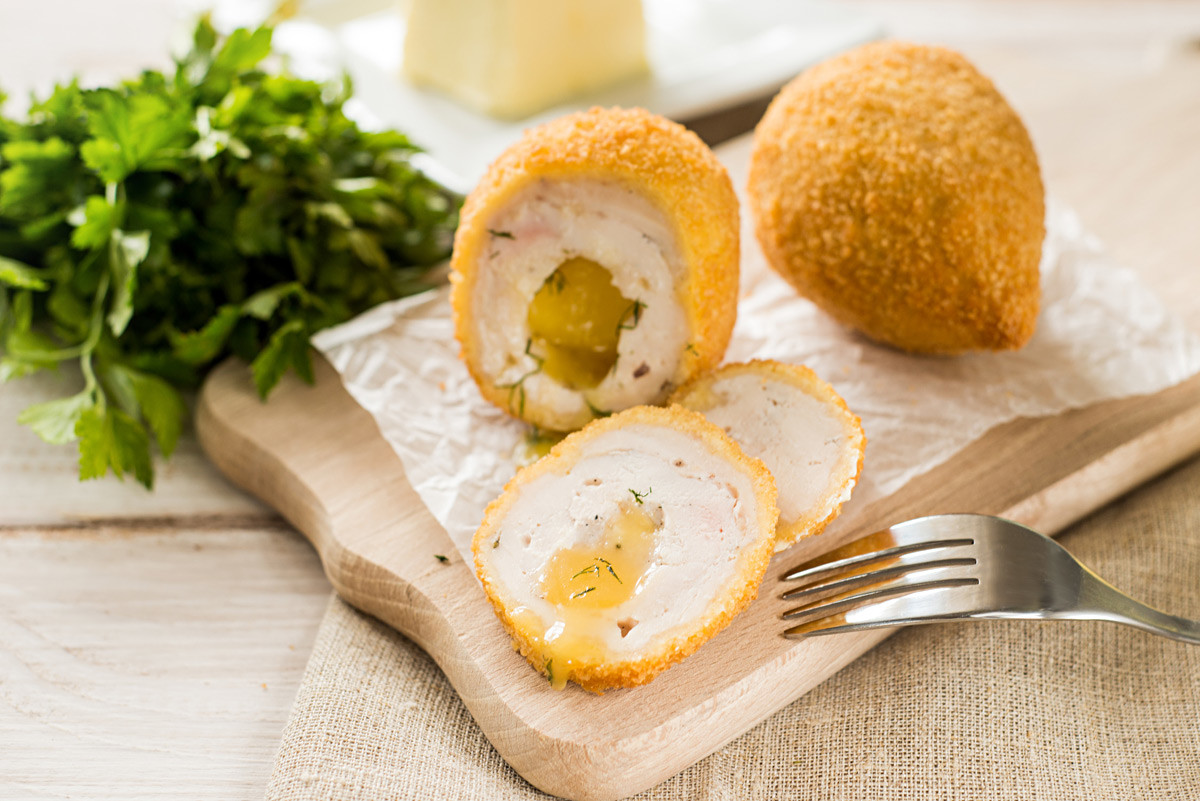 Ukraine’s most renowned dish is famous all over the world. However, it’s a tricky dish to master, as it takes real expertise to ensure the butter does not flow from the middle during frying. Therefore, try it at a Ukrainian restaurant to get the real deal. 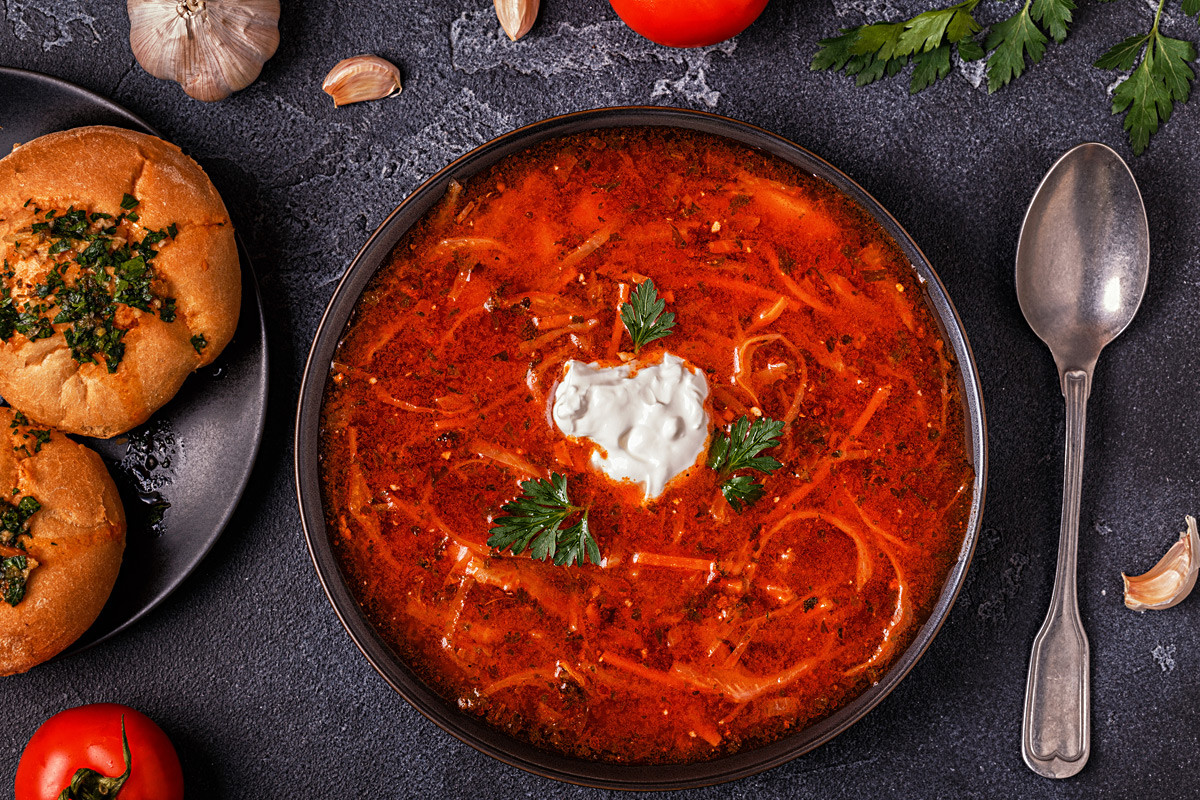 Also claimed by Russia as the poster dish for their national cuisine, it’s likely that Eastern Europe’s most beloved beetroot and meat soup actually originated in Ukraine. If you order this at a Ukrainian restaurant (rather than a Russian one), it’s likely to have been cooked for hours in a wooden oven. A Ukrainian white borsht made with parsnips, potatoes, horseradish and sausage is also available in some places. 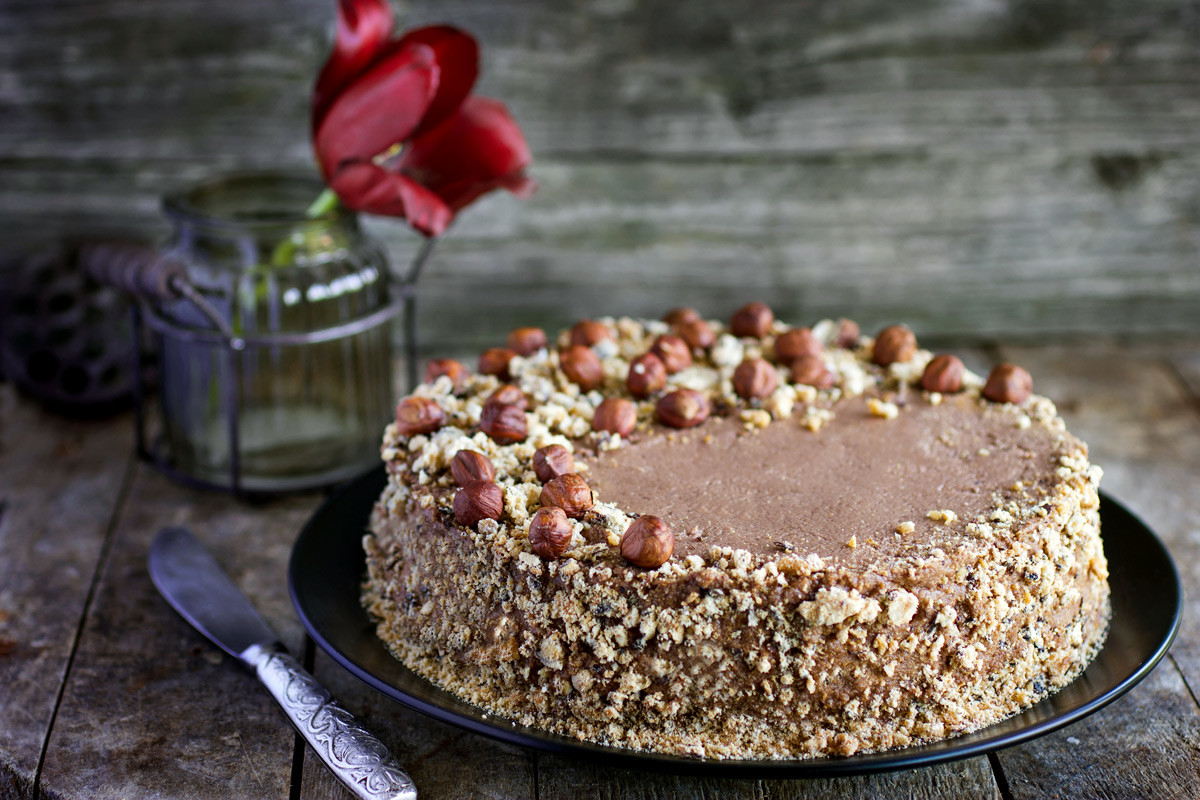 Another “brand” of the Ukrainian capital, this chocolate-topped delight, filled with meringue, fruit, and buttercream, has made its way over to Russia.