10 British foods that most Russians will only try once 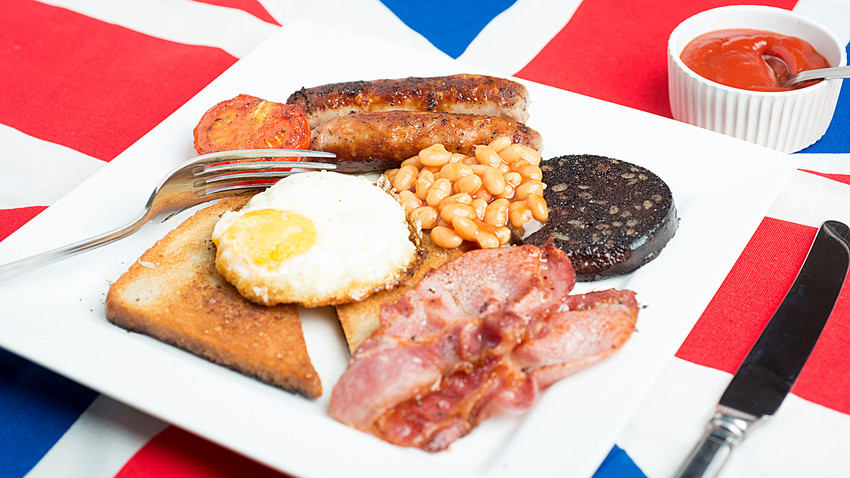 Getty Images
Russians see many similarities between their cuisine and that of the United Kingdom, but it seems they’re just not sold on deep-fried dishes.

Russians, like the British, are not snobs when it comes to food. While the French experiment with haute cuisine and micro-portions, Brits and Russians fly the flag for the hearty slap-up meal. However, it seems there are some things the Brits usually eat that are just a step too far for most Russians. 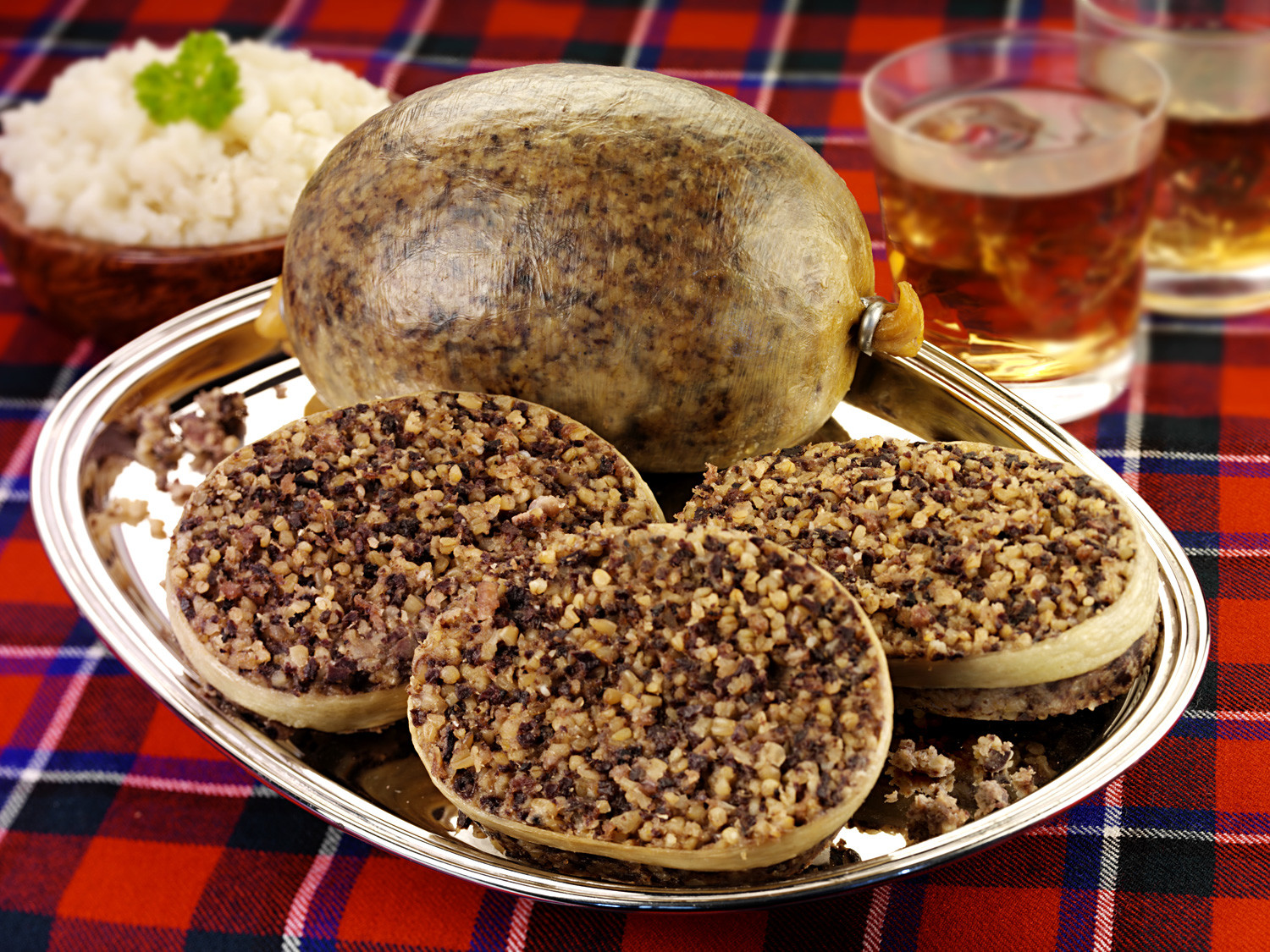 Ah, haggis. The infamous Scottish national dish is made from some of the least appetizing ingredients known to man, and among them are sheep’s heart, liver and lungs; essentially, whatever miscellaneous sheep organ you can find. As a child, a ubiquitous threat from my parents for misbehaving went something like, “smarten up, or you’ll be having haggis for dinner!”

Unsurprisingly, the Russians are on roughly the same page as the rest of the non-Scottish world when it comes to haggis. “I ate it once as a dare at a British restaurant in Moscow,” Pavel Grigoriev tells us. “I simply couldn’t get over the thought of eating sheep lung. If you’re trying it, I highly recommend a strong whisky to wash it down.” Words to live by.

Say what you want about Russia’s weird food, but they at least put in an effort. So, you can excuse Russians for thinking that this tasty carb-heavy feast was invented by someone who had just two ingredients left in the house and was too lazy to go out to shop. 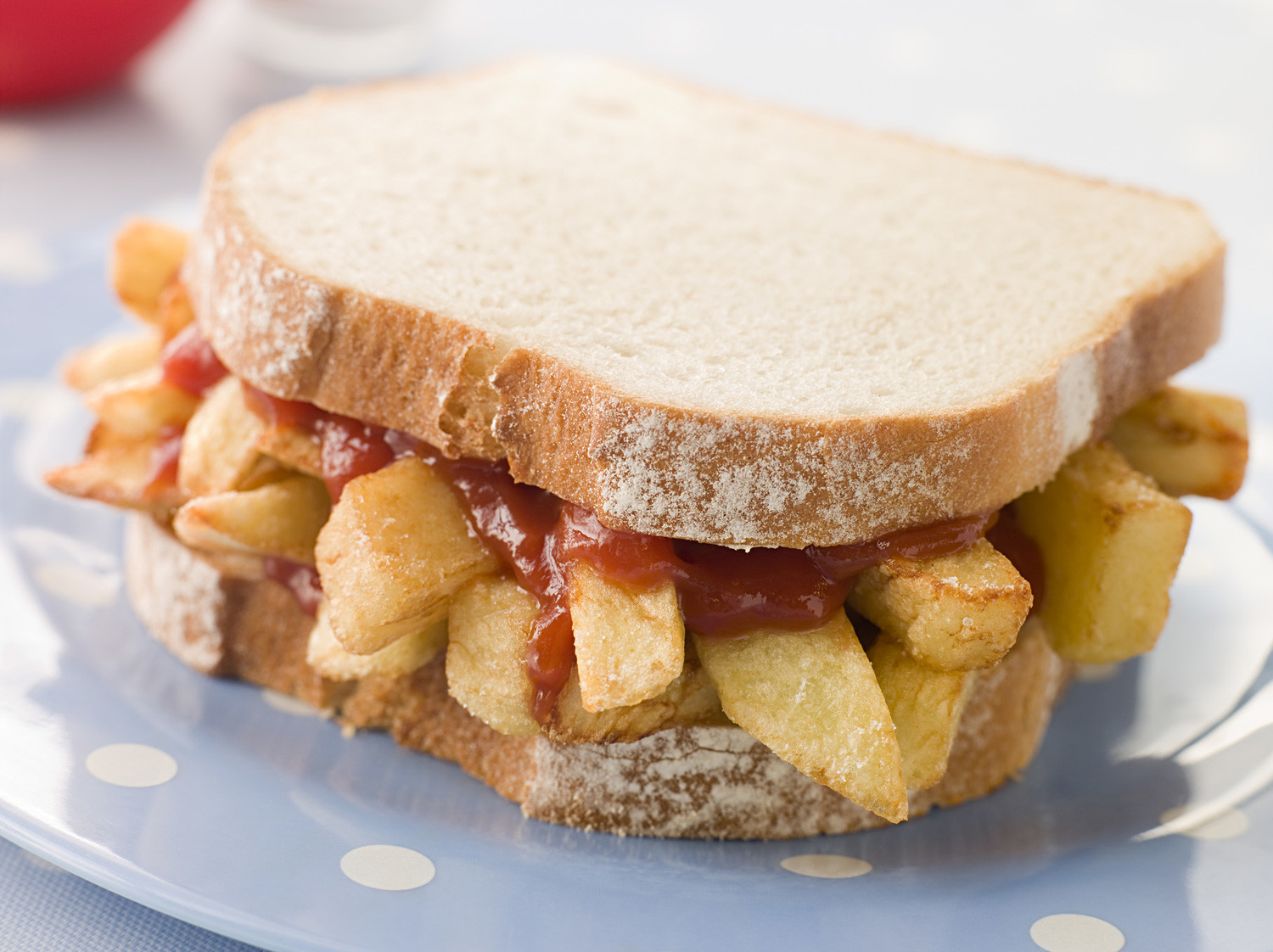 For Yulia Shamporova, the appeal of eating two side dishes at once does isn’t that alluring. “Sandwiches are supposed to be substantial, maybe with sausages or some kind of meat,” she says. “These are two ingredients that should not be served together.” 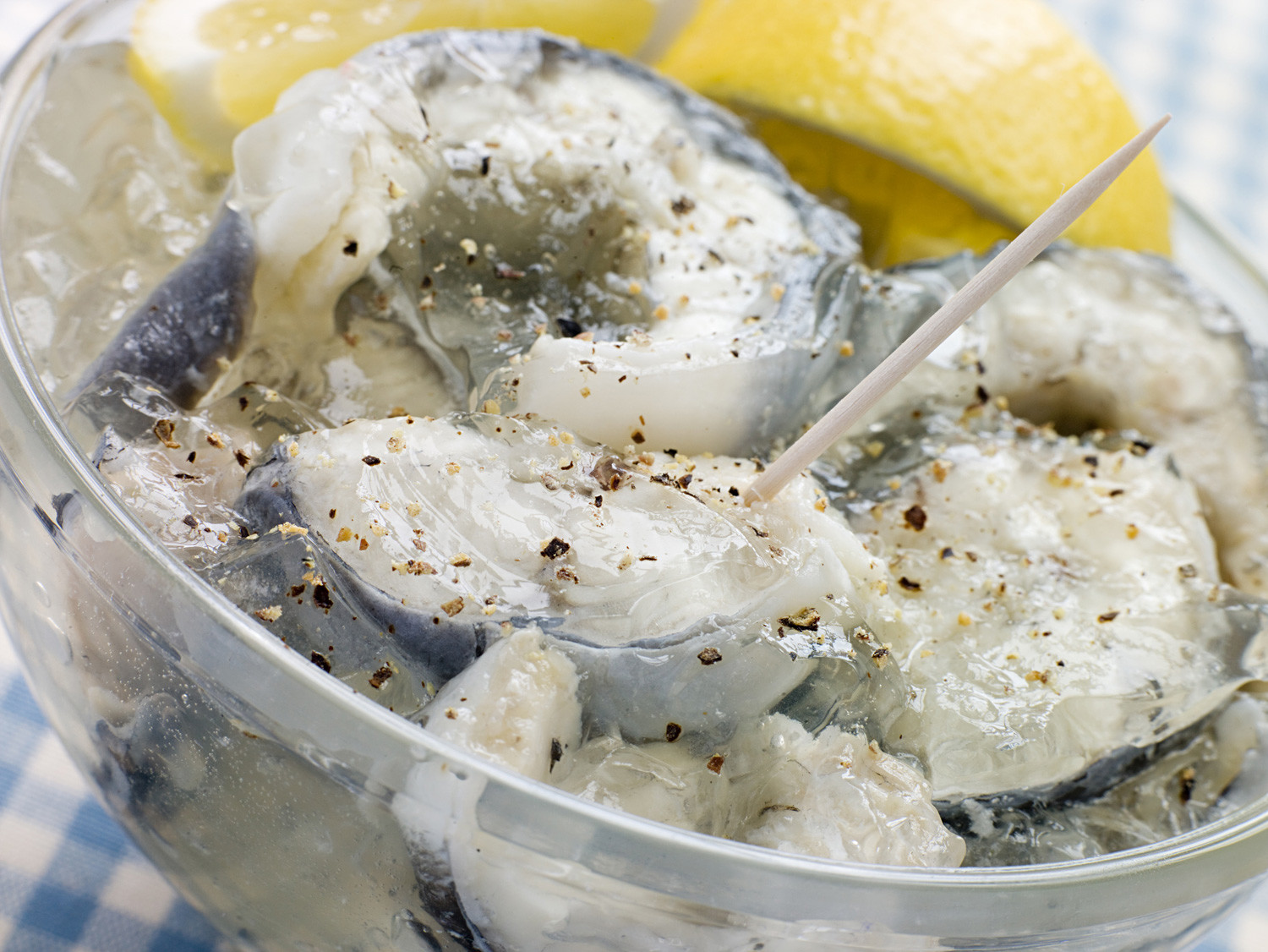 The favorite dish of Fools and Horses character, Alan Parry, has had a hard time making it beyond London’s East End. That’s to say, it hasn’t quite caught on yet in Russia.

How can that be? Do the Thames’ freshest eels not look appetizingly gelatinous upon their bed of slime? Clearly not for Misha Romanovich: “If you ever see this in Russia, it’s because someone British is trying to get revenge for kholodets.”

When it comes to unhealthiness, Scotch eggs definitely give pork scratchings a run for their money. In fact, many Brits associate this Scottish delicacy with nothing but an Alan Partridge episode in which he eats a Scotch egg and then tries to scare people away with the bad breath he gets from it. 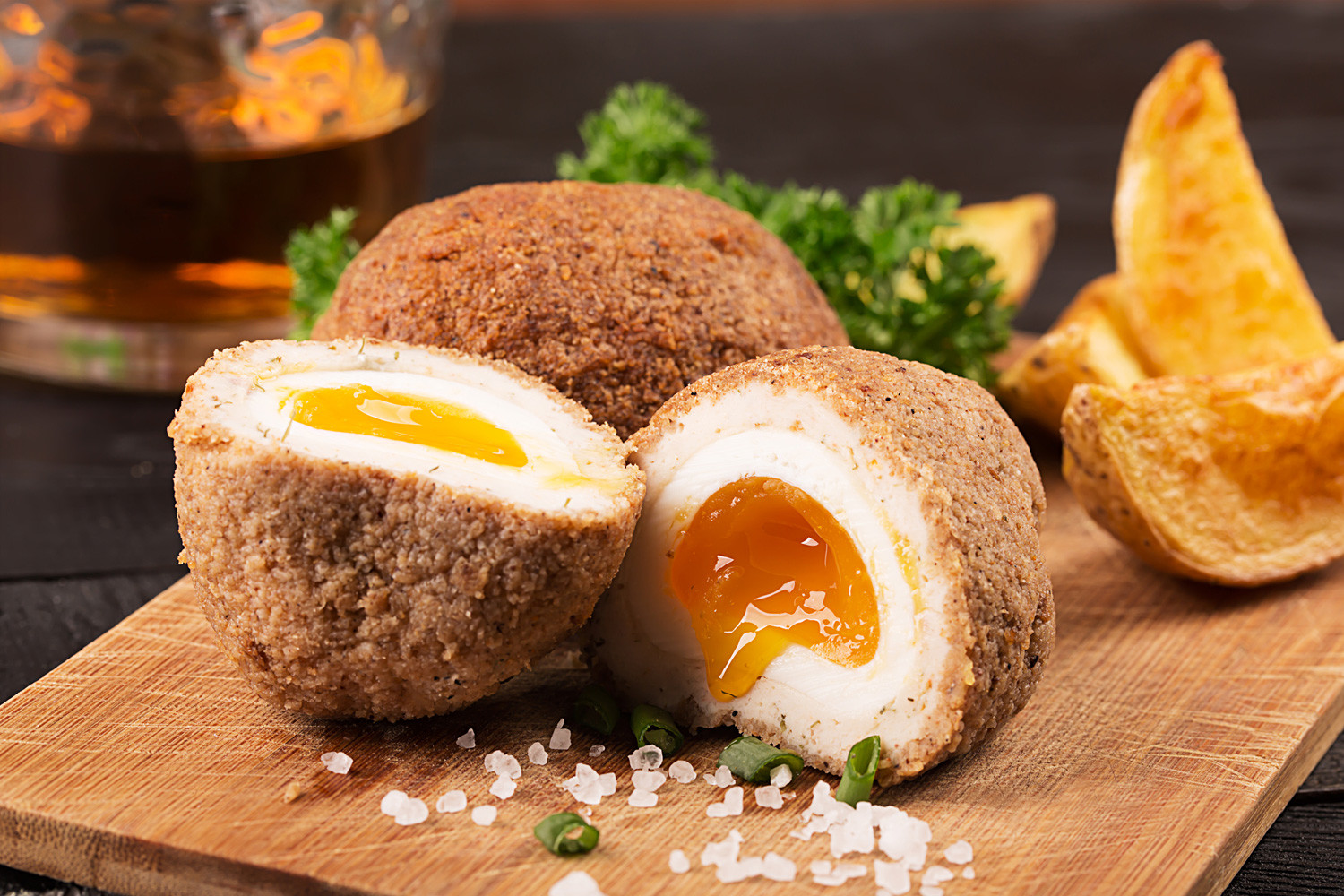 Scotch eggs are not too difficult to find in Russia: British restaurants in Moscow, such as Lawson Bar or Haggis, usually serve them. The eggs, however, have yet to leave their mark on an unimpressed Russian audience: “I tried it once, I wouldn’t rave about them,” says Dmitry Golub.

For Aizhan Kazak, Scotland’s deep-fried delight was a bit much: “It’s almost like a Mini Kiev, but it’s so deep-fried that it made me want to go on a buckwheat and veggie detox afterwards.” 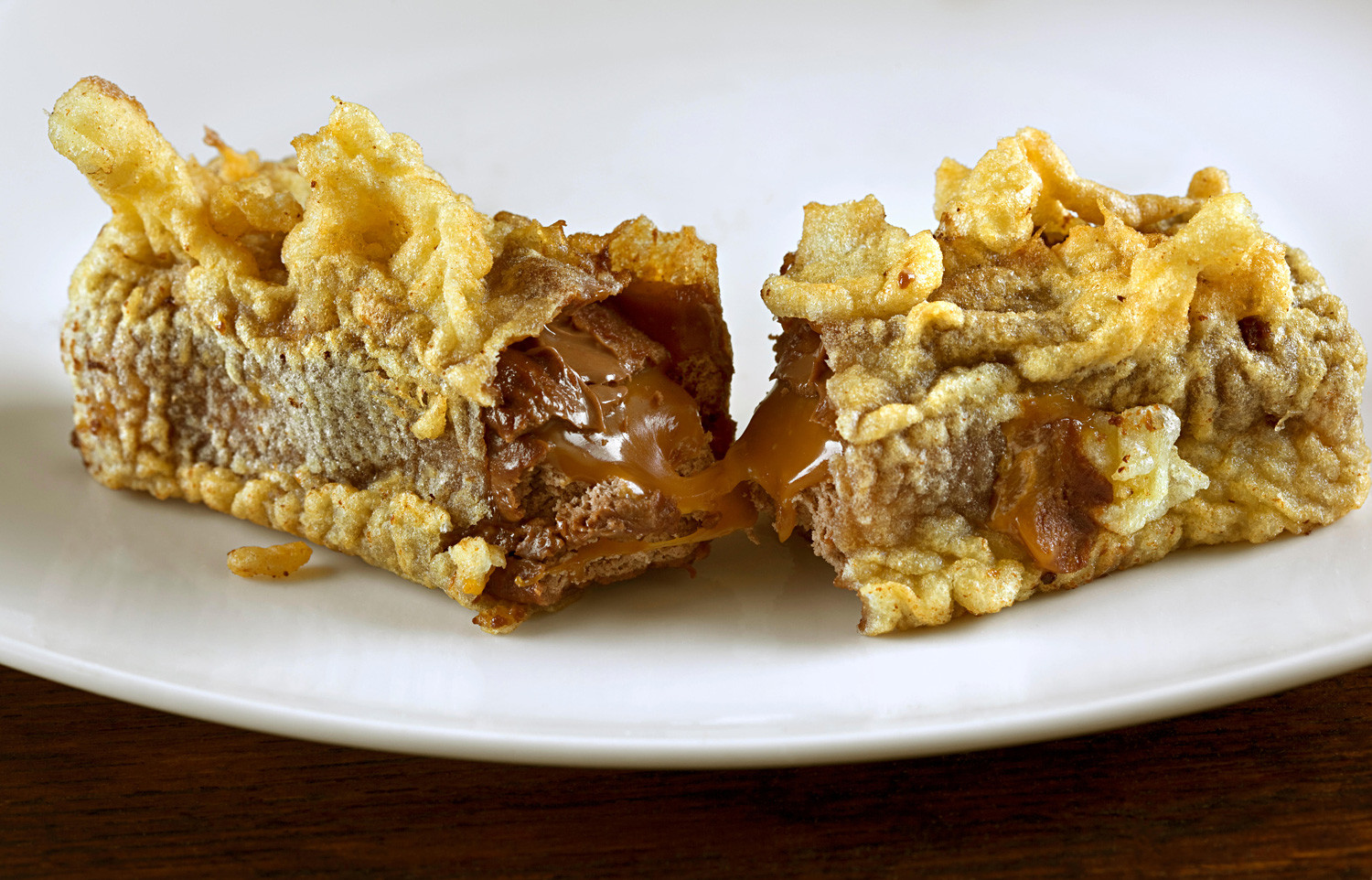 Once again, you can blame the Scots for this delightful export. The lack of chippies in Russia, however, means that the infamous deep-fried Mars bar has remained something of a faraway legend for most Russians.

“I’ve tried a Mars, but never battered,” says Yaroslav Tyomkin. “Your bars are so much richer than Russian chocolate like Alyonka, so I can’t imagine what it’s like fried. I’d like to try it once, but if I didn’t get a heart attack, I’d count myself lucky.”

This essential pub snack is not too dissimilar to a Russian variation called salo – basically spiced pork fat typically served with alcohol. The key difference? You guessed it – pork scratchings are deep-fried. 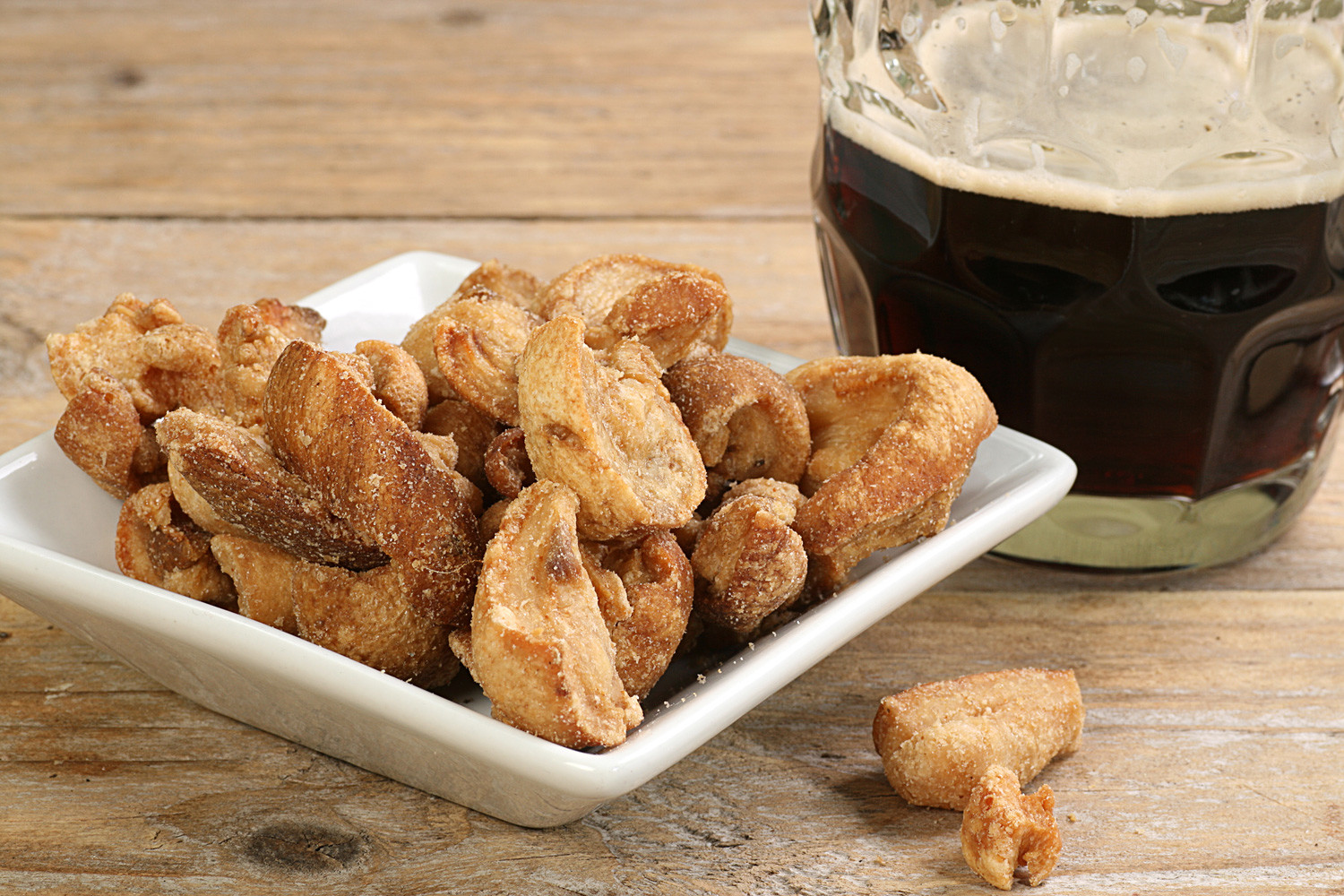 Like with Scotch eggs and battered Mars bars, the heavy frying is the delicacy’s stumbling block with Russians. “I tried one and it was so rock-solid that I could barely bite into it,” says Olga Iosava. “When I finally chewed my scratching, it was quite nice, but I’m pretty sure I also found a hair in there.” Swings and roundabouts. 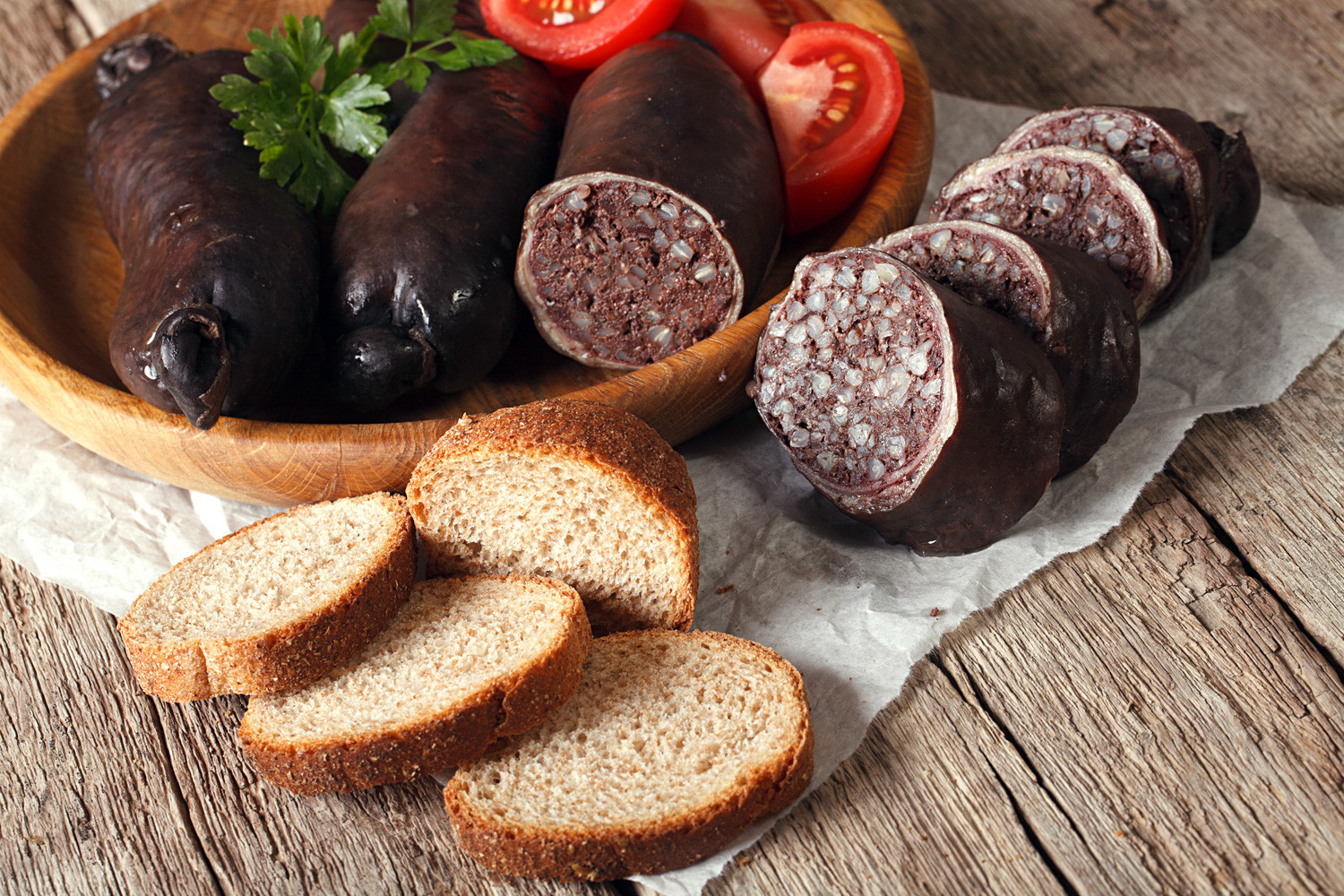 Every Russian I’ve showed this delicacy to has responded with pure shock, refusing to believe that it’s made with real blood. If you find yourself in this situation, just remind them that they live in a country where hematogen, a bar made with cow’s blood and vanilla, is eaten like chocolate. That’s right – you keep on eating your Full English.

What is it with Brits and offal? This organ-based specialty was popularized in Britain during World War II when meat was heavily rationed, and has since been rebranded as a luxury snack. 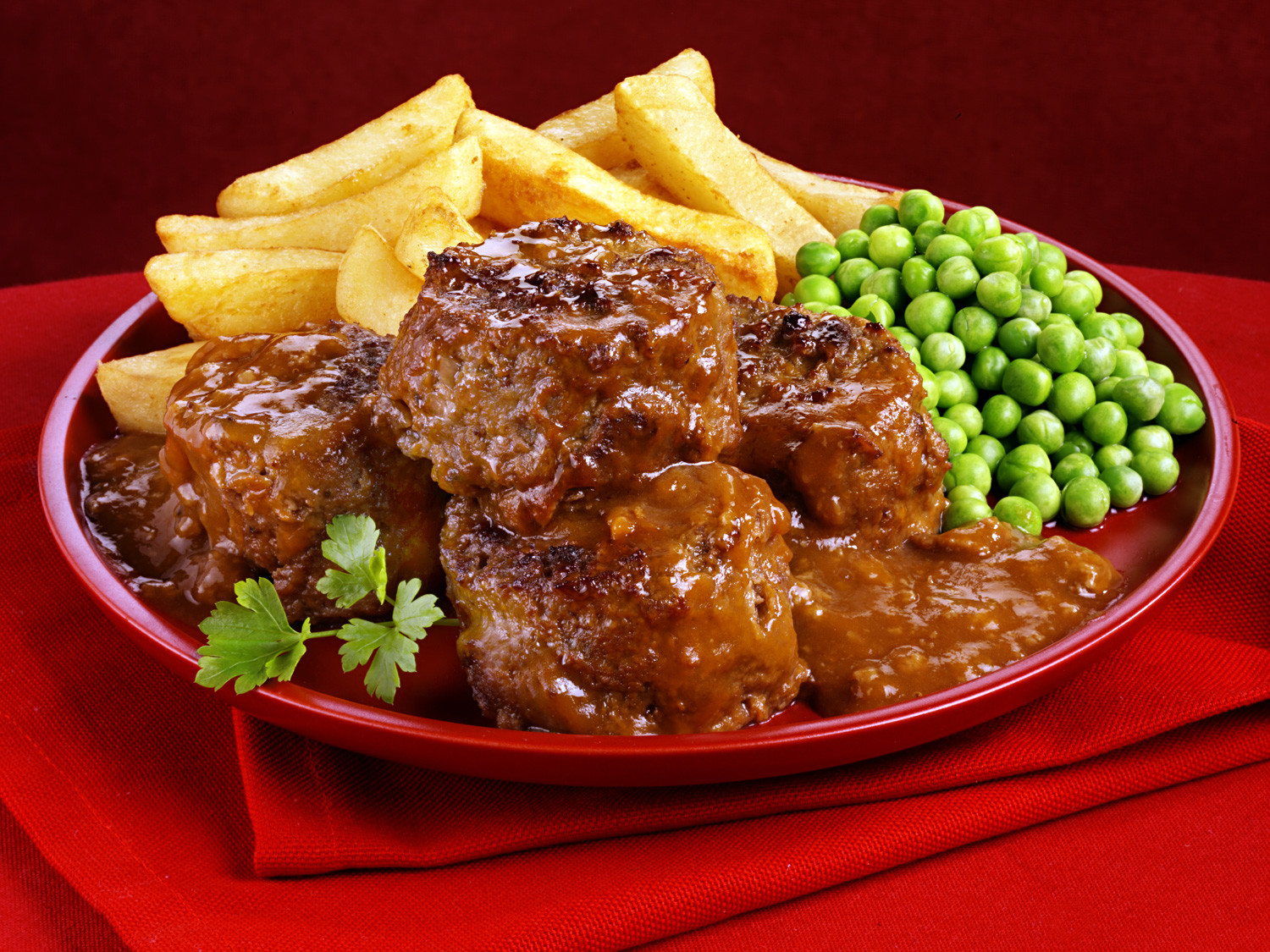 Russians, however, are not buying it. “They look deceptively tasty, like little steak balloons,” Lucia Bakirova tells us. “But when you bite into it, you just get a big taste of pork liver and disappointment. Yuck.”

These creepy spuds may be a staple of every Brit’s childhood, but for Russians their unwarranted joviality is a little too intense. “I don’t want to be watched by my dinner,” says Igor Banin. Fair enough. 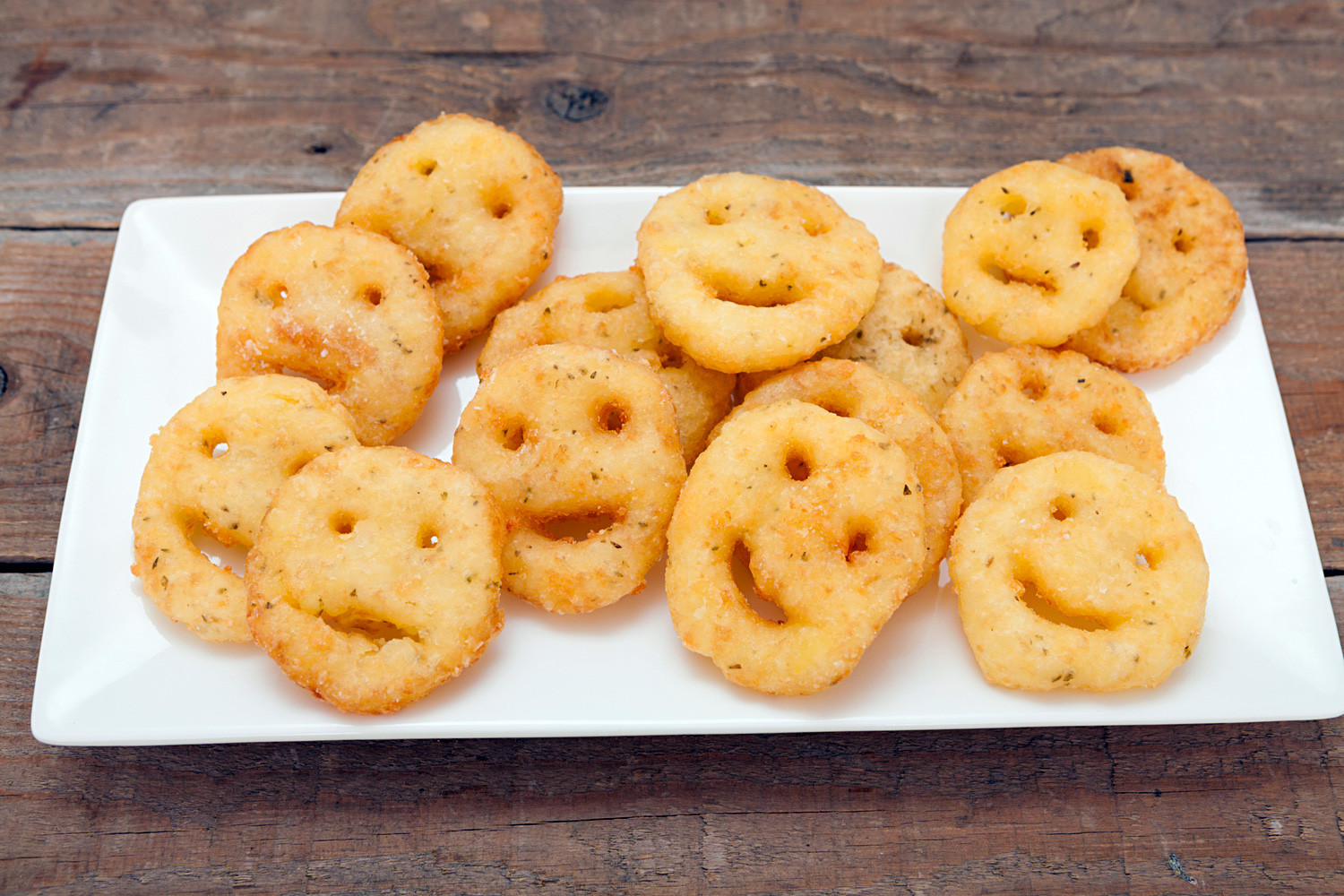 After all, they do say that Russians don’t smile much.

10. All-day breakfast in a can 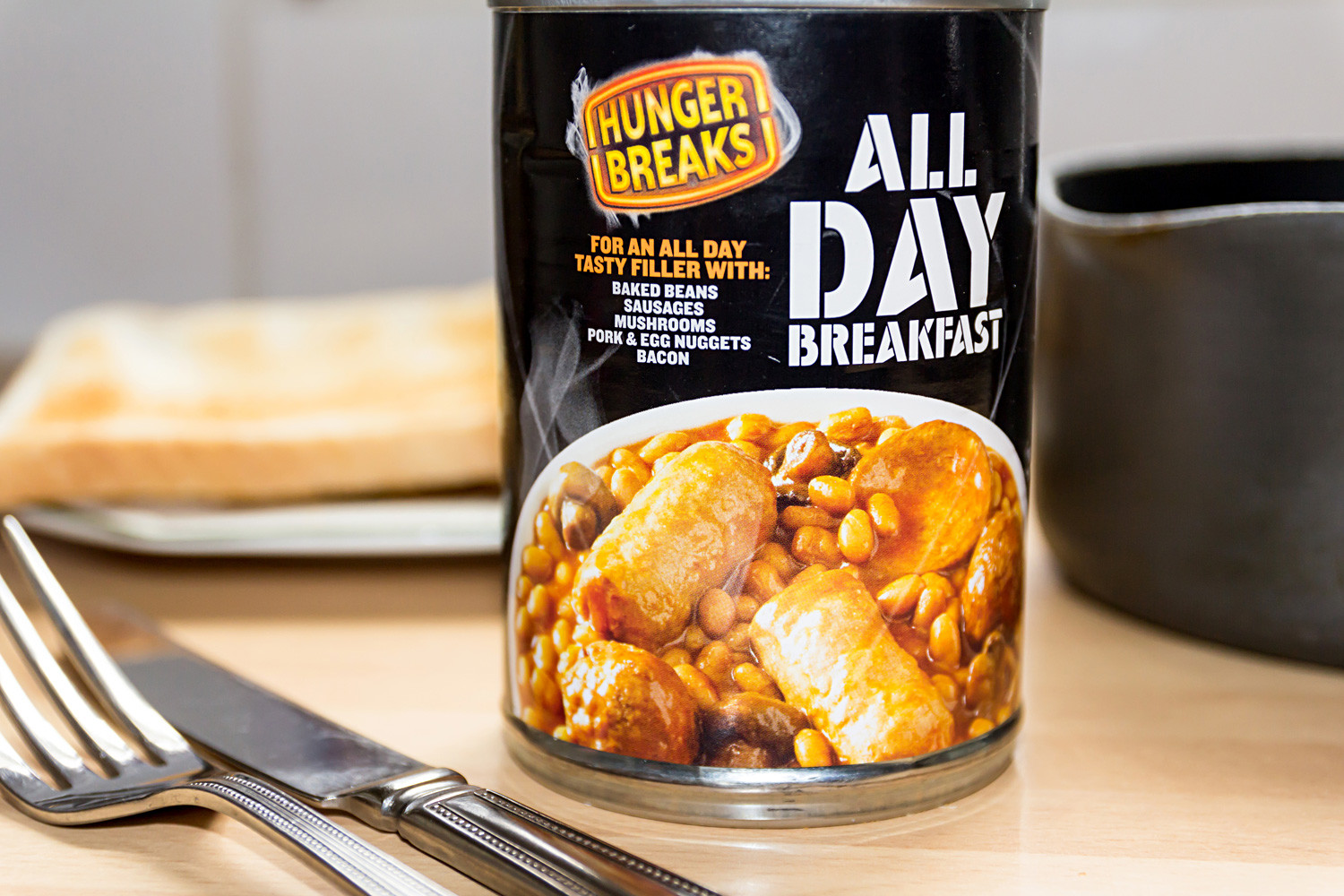 Repulsed by this? Well, you should be. In fact, this is one thing that Brits and Russians can agree on.

Anna Sorokina, however, is willing to give it a chance: “It looks strange, but I’d like to know what it tastes like before I judge.”