Cheburek: Cook the snack that Soviet people stood hours in line for 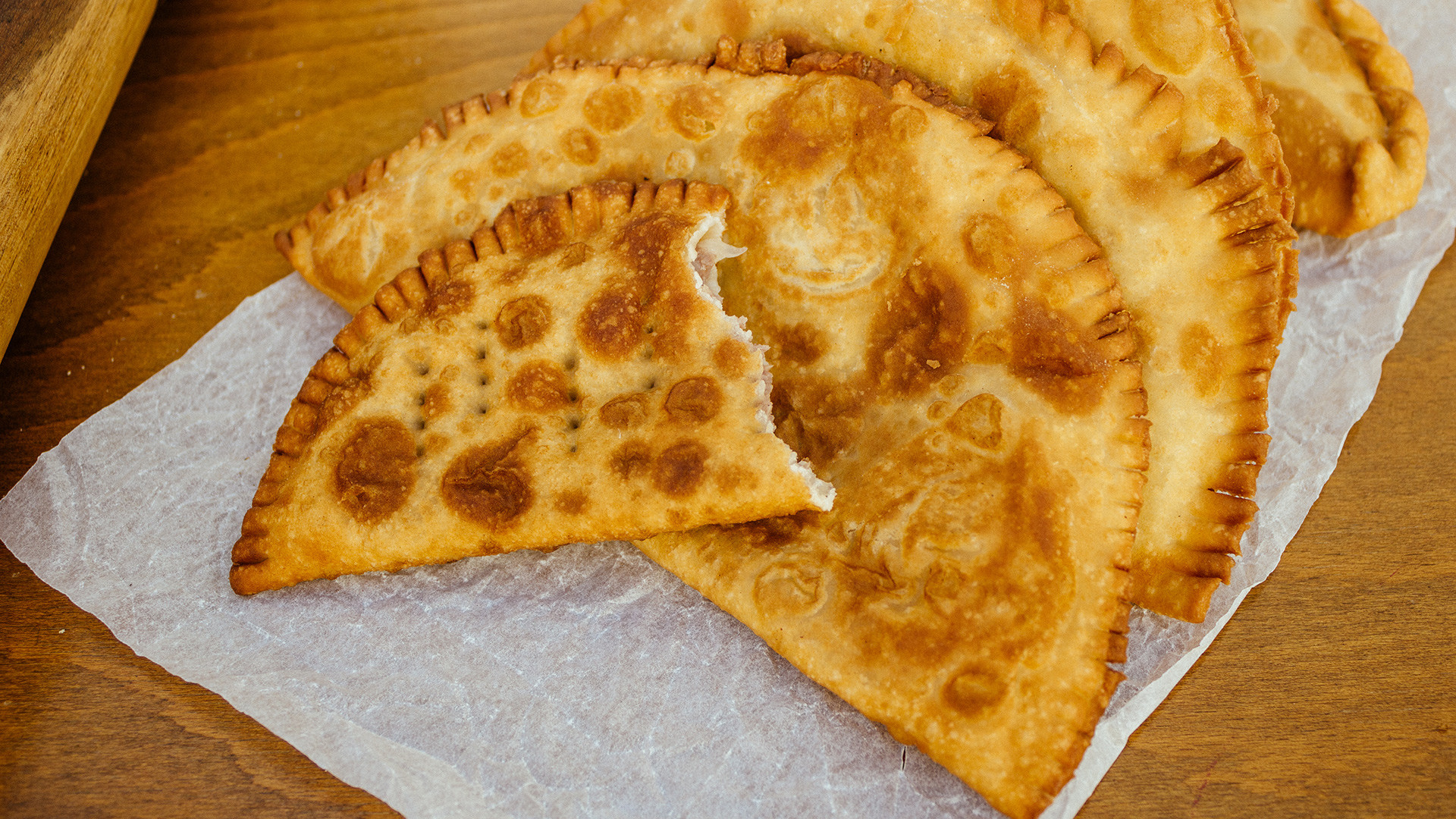 Vasilisa Malinka
While Americans were honing their hamburgers, Soviets learnt the art of eating chebureks.

The cheburek was enormously popular during the Soviet era, and specifically after 1989, when a decree was issued, allowing Crimean Tatars to freely settle throughout the USSR. They brought with them their favorite delicacy - a deep-fried turnover stuffed with seasoned mince or finely chopped meat and fried in vegetable oil or animal fat (according to the traditional recipe).

As chebureks gained in popularity, more and more places selling them started to appear. Cheburechnye places had never ending lines of people waiting for their cheburek. The thing about chebureks is that, even in its most fancy incarnation, this ‘pie’ is cheap and extremely tasty. Therefore, you could say cheburechnaya places serve as a place where the boundaries of social-economic inequality are almost completely non-existent.

For some people, a cheburek is considered fast food, for others it’s a delicious gourmet treat. You could take a girl out on a date to eat chebureks or you could snack on chebureks while drinking vodka with friends.

The only ‘problem’ with chebureks is that they are very uncomfortable to eat and there’s often a risk of getting your hands, clothes and face smothered with fatty oil! In fact, it’s considered art to eat a cheburek, because that bullion is almost the most valuable and tasty part of a cheburek!

My father tasted his first cheburek at the age of 6. His parents lived in Algeria for a long time where my grandfather worked as a water well driller. Once, they sent my dad a crisp white shirt and a small blue tie with a little goat emblem on it as a gift. My great grandma let him wear them for his first trip to the cheburechnaya. But as soon as father started to eat his first cheburek, he squirted fat onto the tie, which left a giant stain, making both my father and his grandmother very upset! In any case, that story has never been forgotten and to this day that little tie still exists to remind us of that precious cheburek moment from my dad’s childhood! 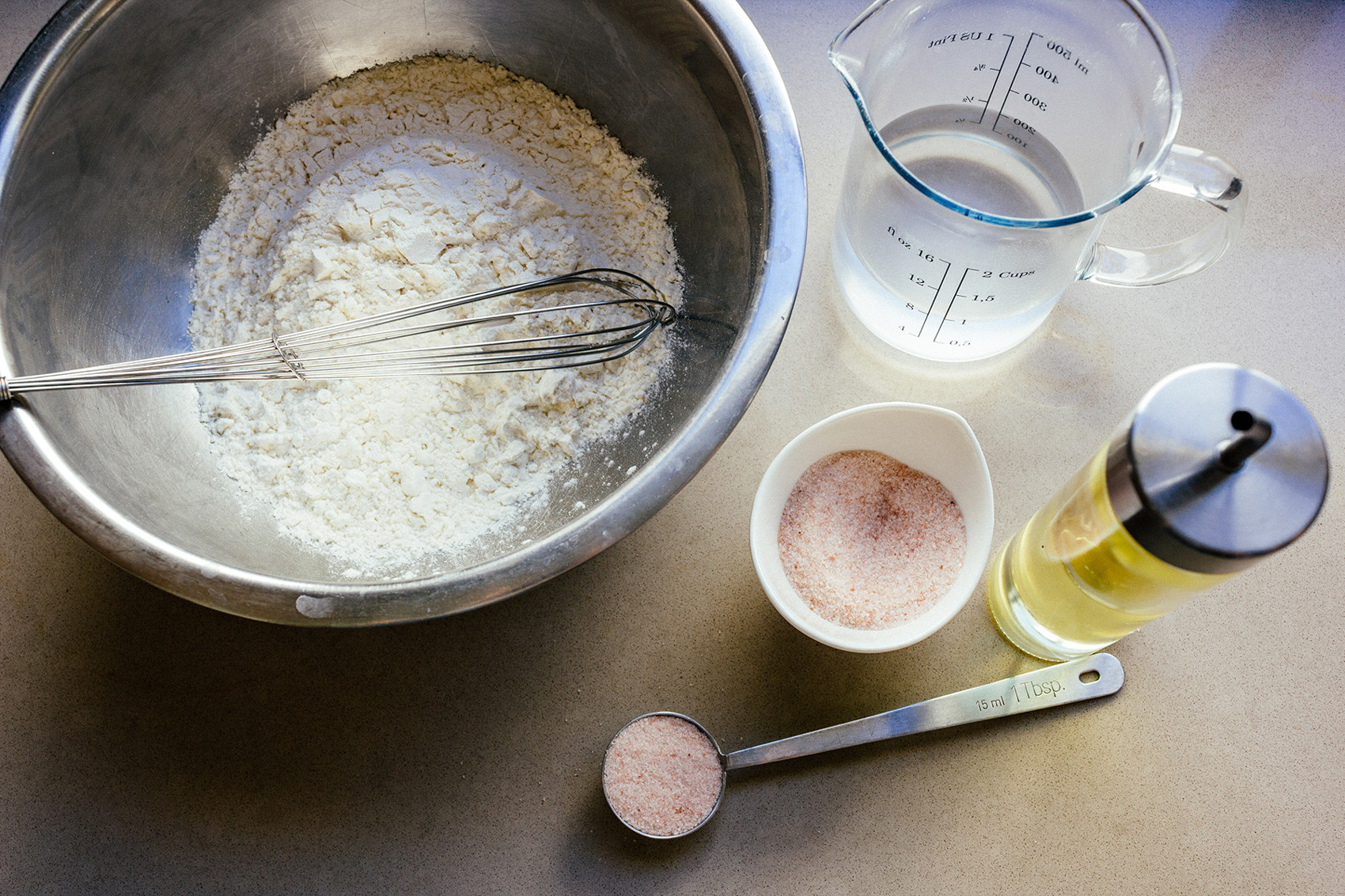 1. Mix flour and salt together in a bowl. Add the tablespoon of oil to the cup of water and then add it to the flour and salt. Mix together all the ingredients and then shape the resulting dough mass into a ball. Wrap the dough in plastic film and let it rest in the fridge for 30 minutes to 1 hour. 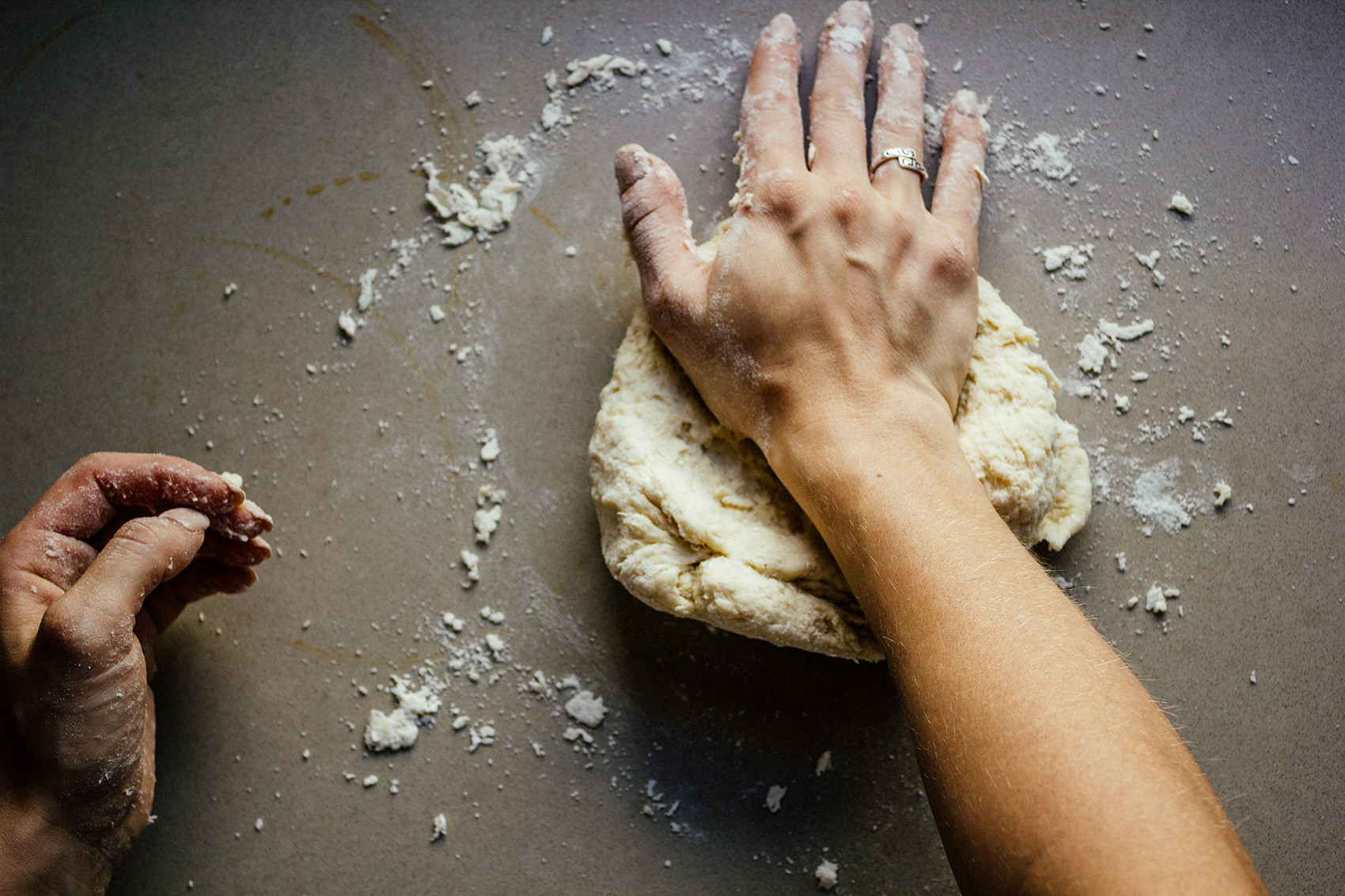 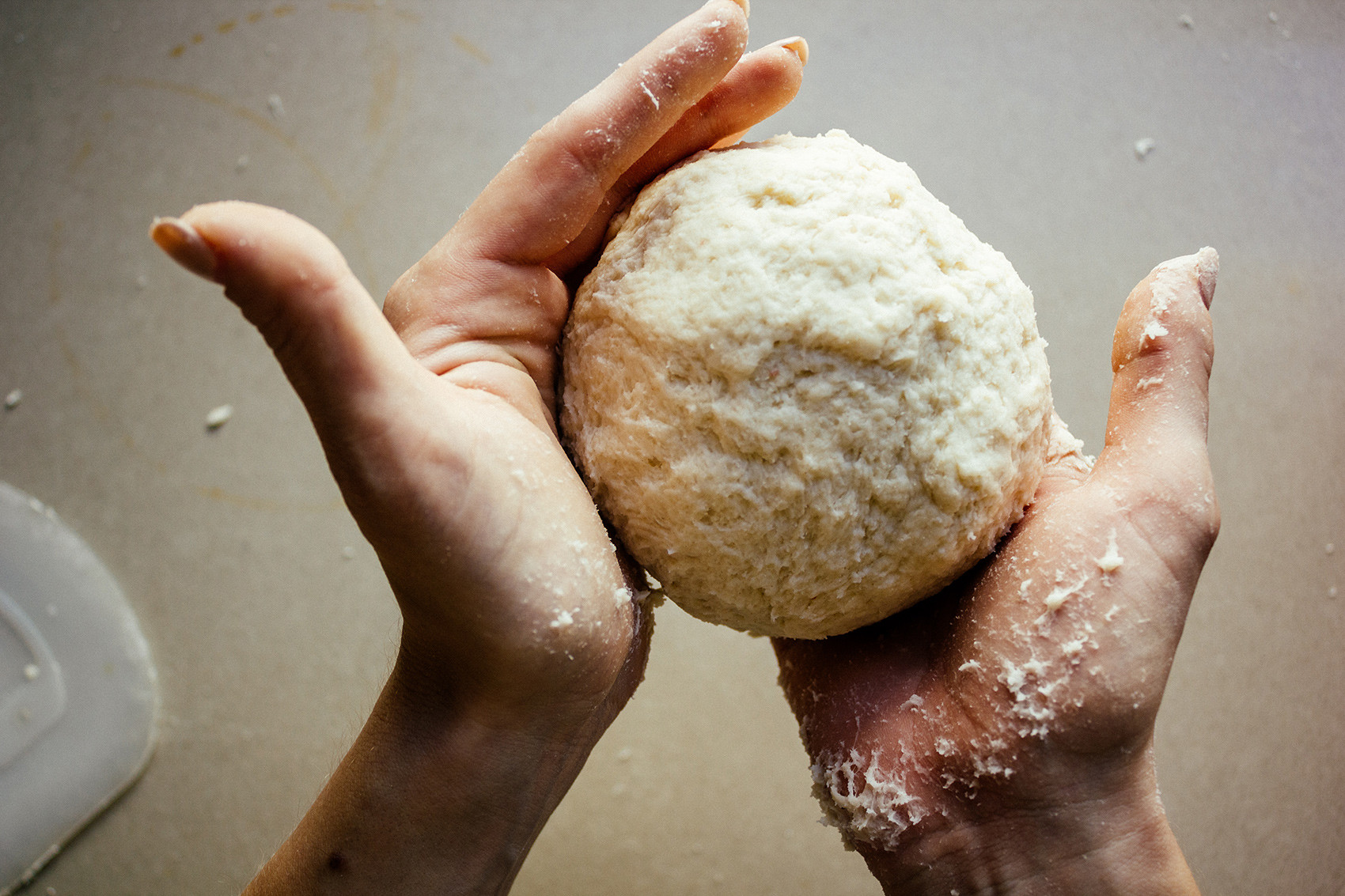 2. Dice the onion and mix it in with the beef mince (or chopped beef). Add salt, powdered cumin and ground black pepper. Mix very well. 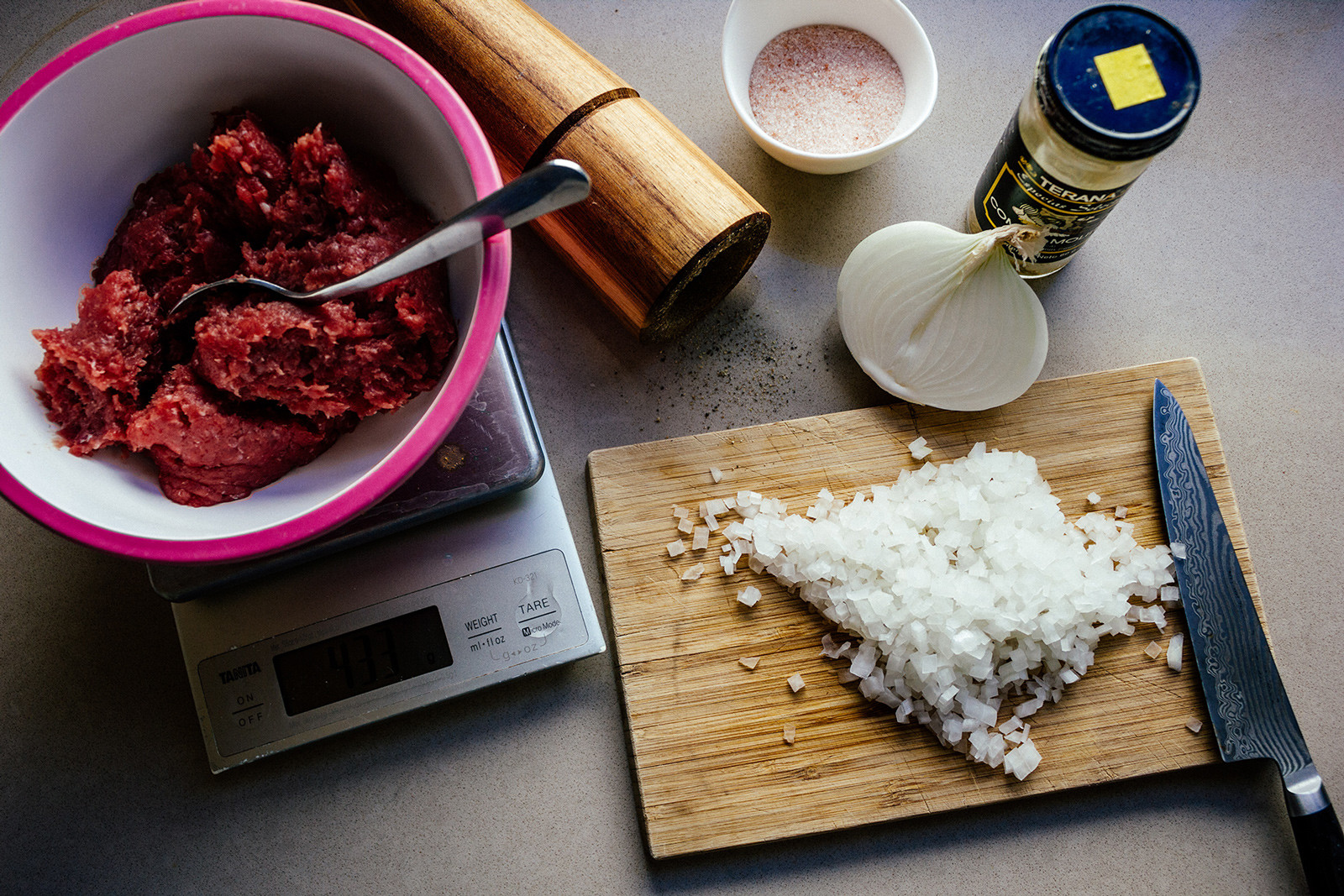 3. Once the dough has rested, remove it from the fridge and knead it on a floured surface until it is smooth and doesn’t stick to the palms of your hands. Divide the dough into two parts and roll it out until it is about 2-3mm thick. 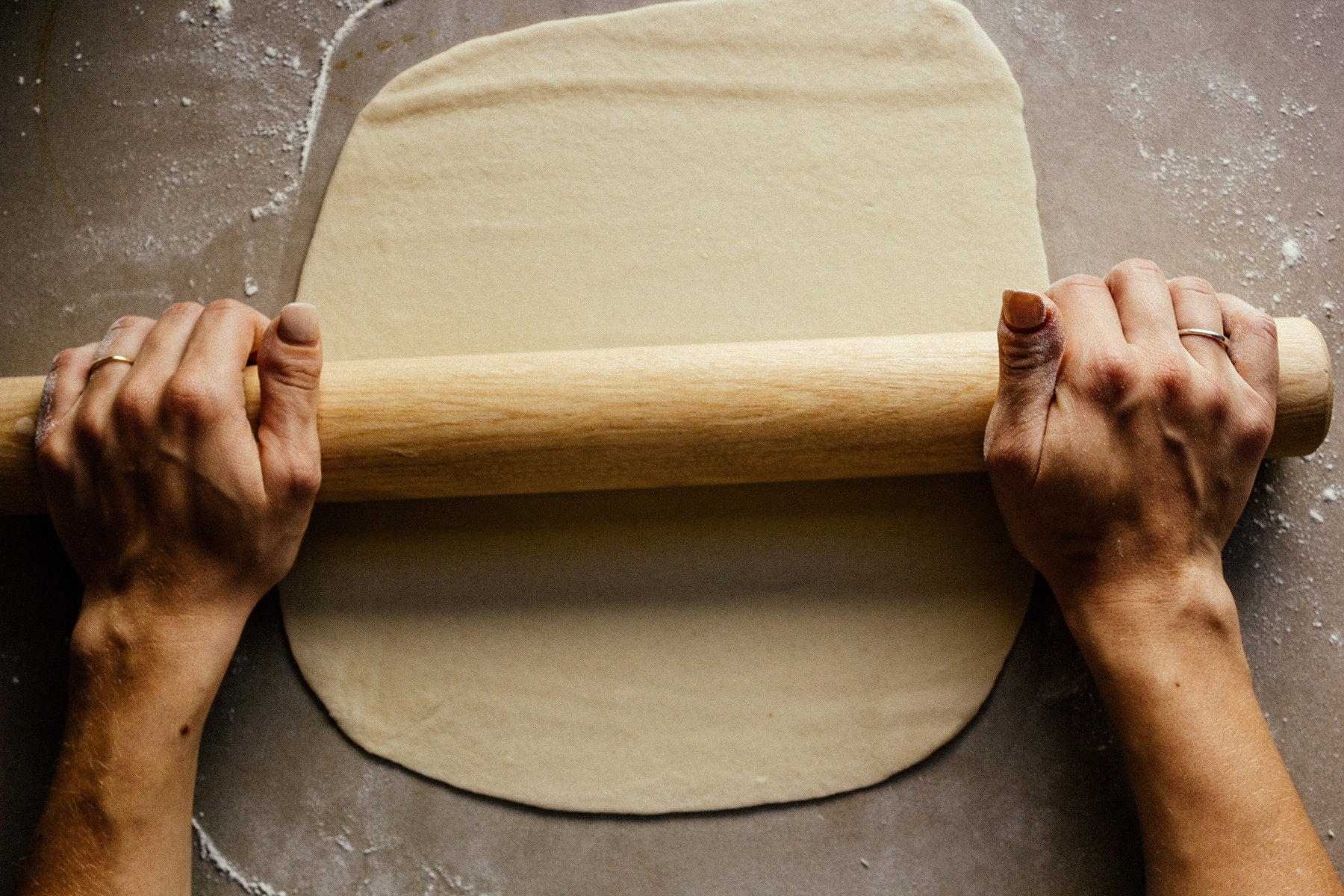 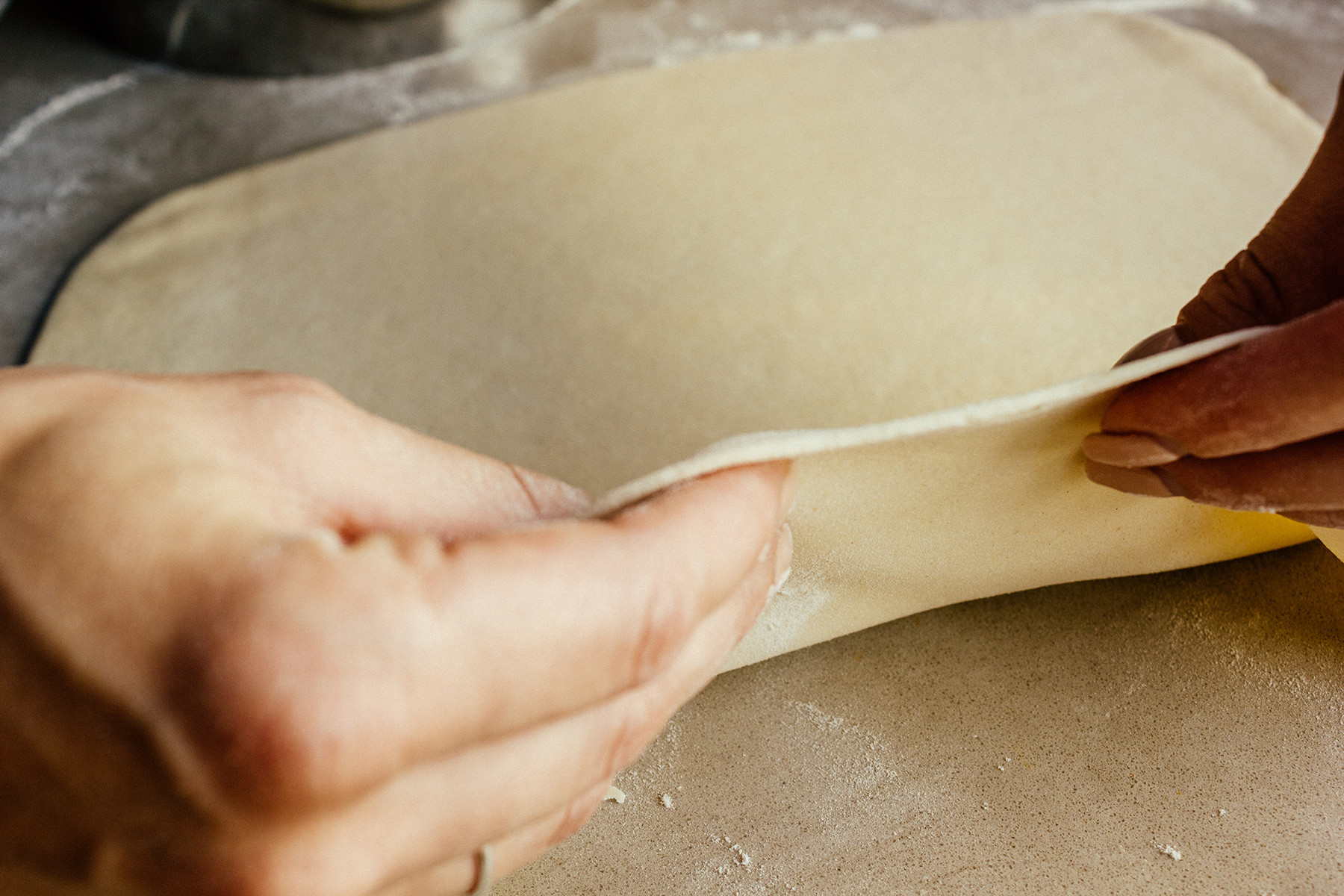 4. Cut out large circles from the dough and place the filling mix on one half. Brush the edges of the dough with some water and fold the other half of the dough over the filling. Push the excess air out and stick the edges together. Then crimp them with a fork. 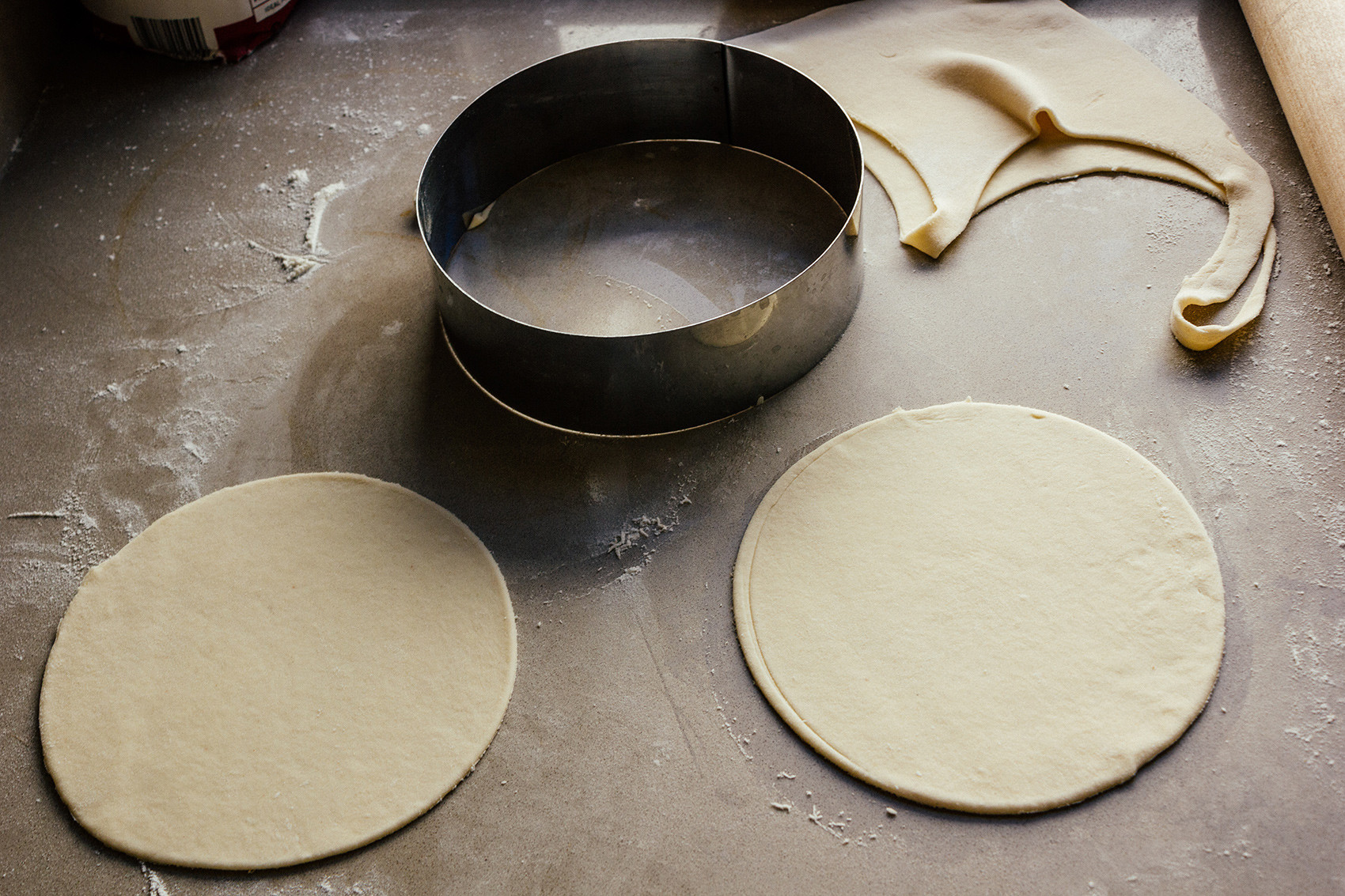 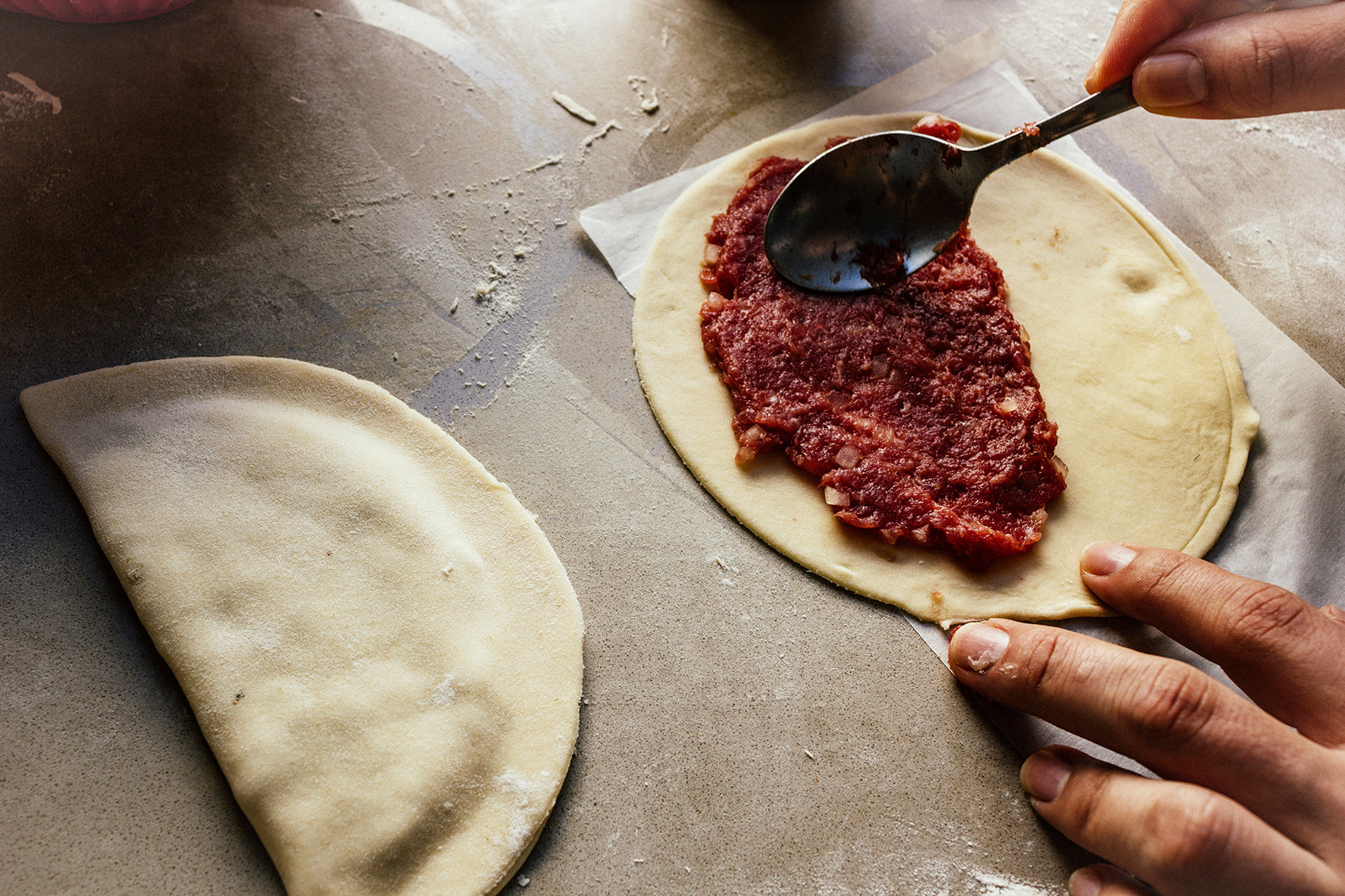 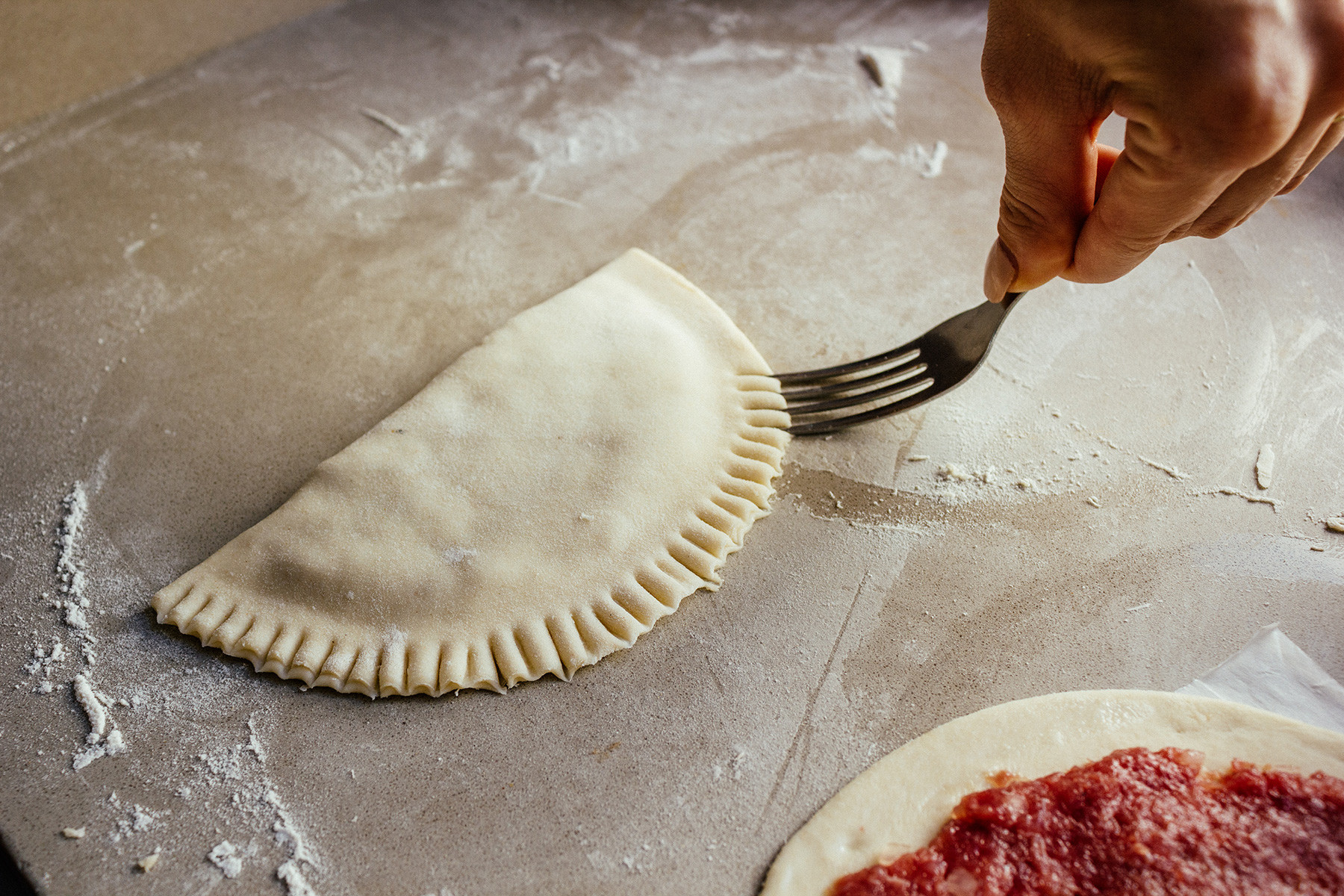 5. Heat up a wide pan with oil to around 180°C. When the oil is ready, begin frying your raw chebureks for approximately 2 minutes, flipping them halfway. If the oil is too hot, the dough will burn too fast, leaving the filling uncooked, so fry on medium heat. 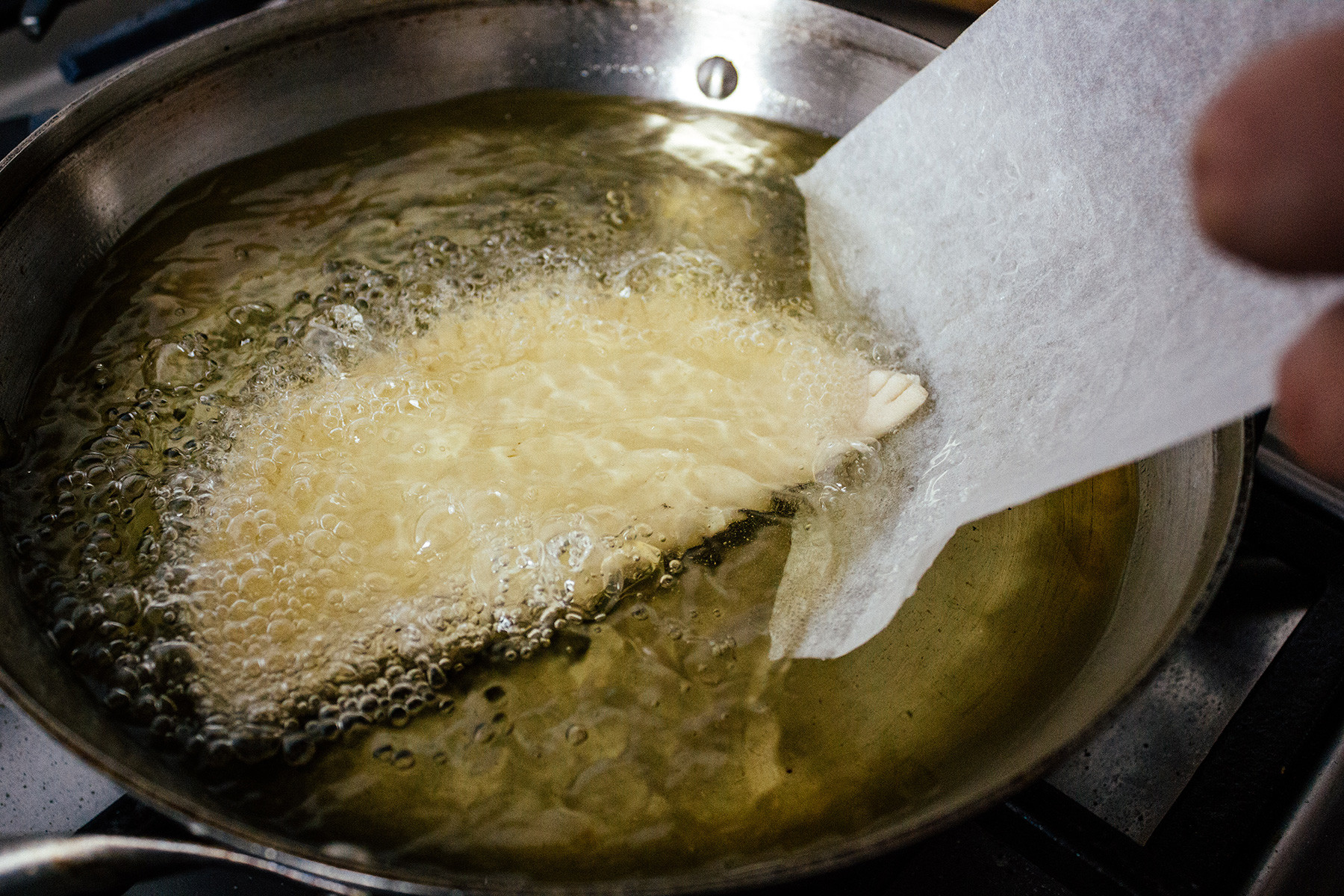 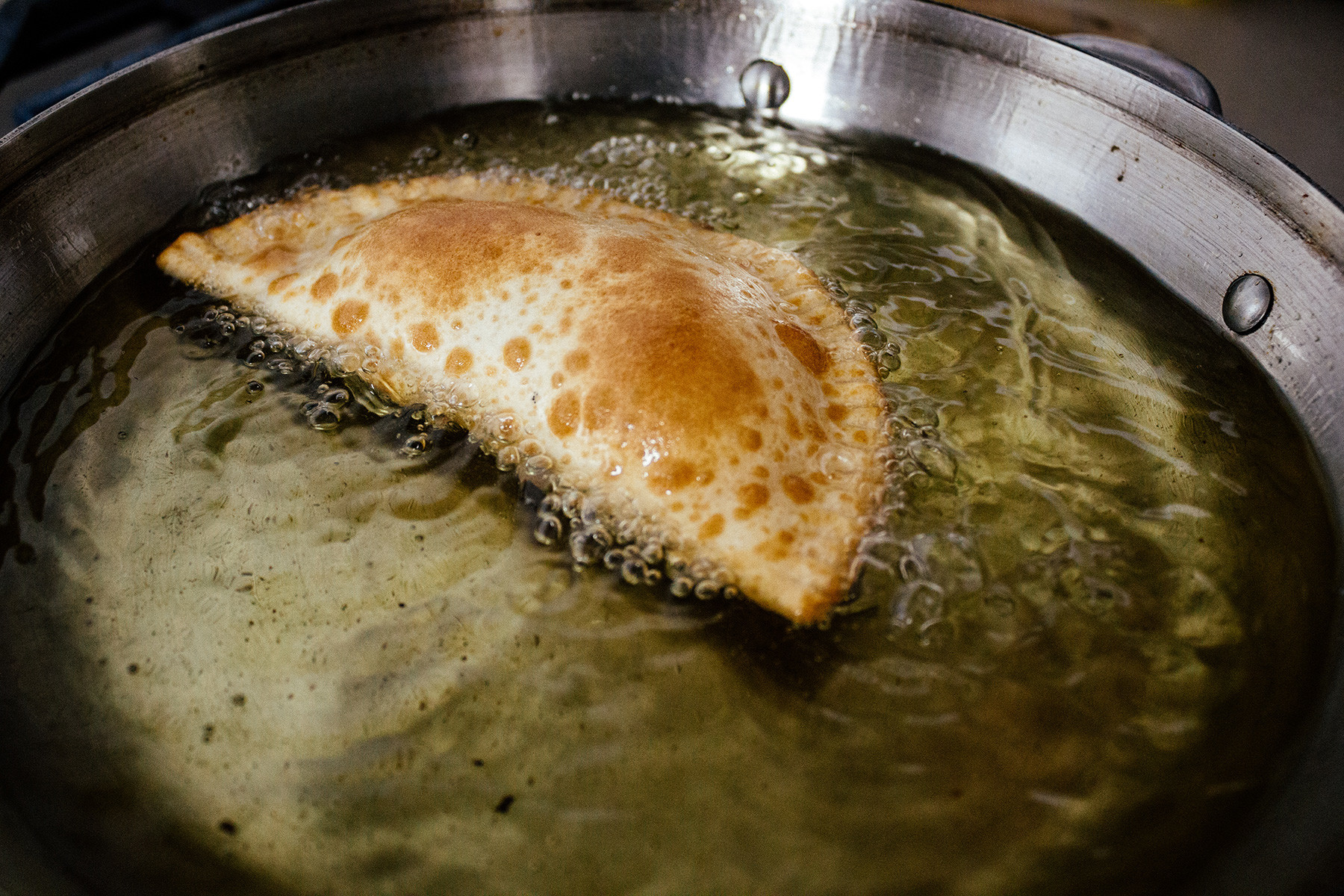 6. Let your chebureks cool a little before consuming - that’s if you’re able to resist the temptation of eating one right way! 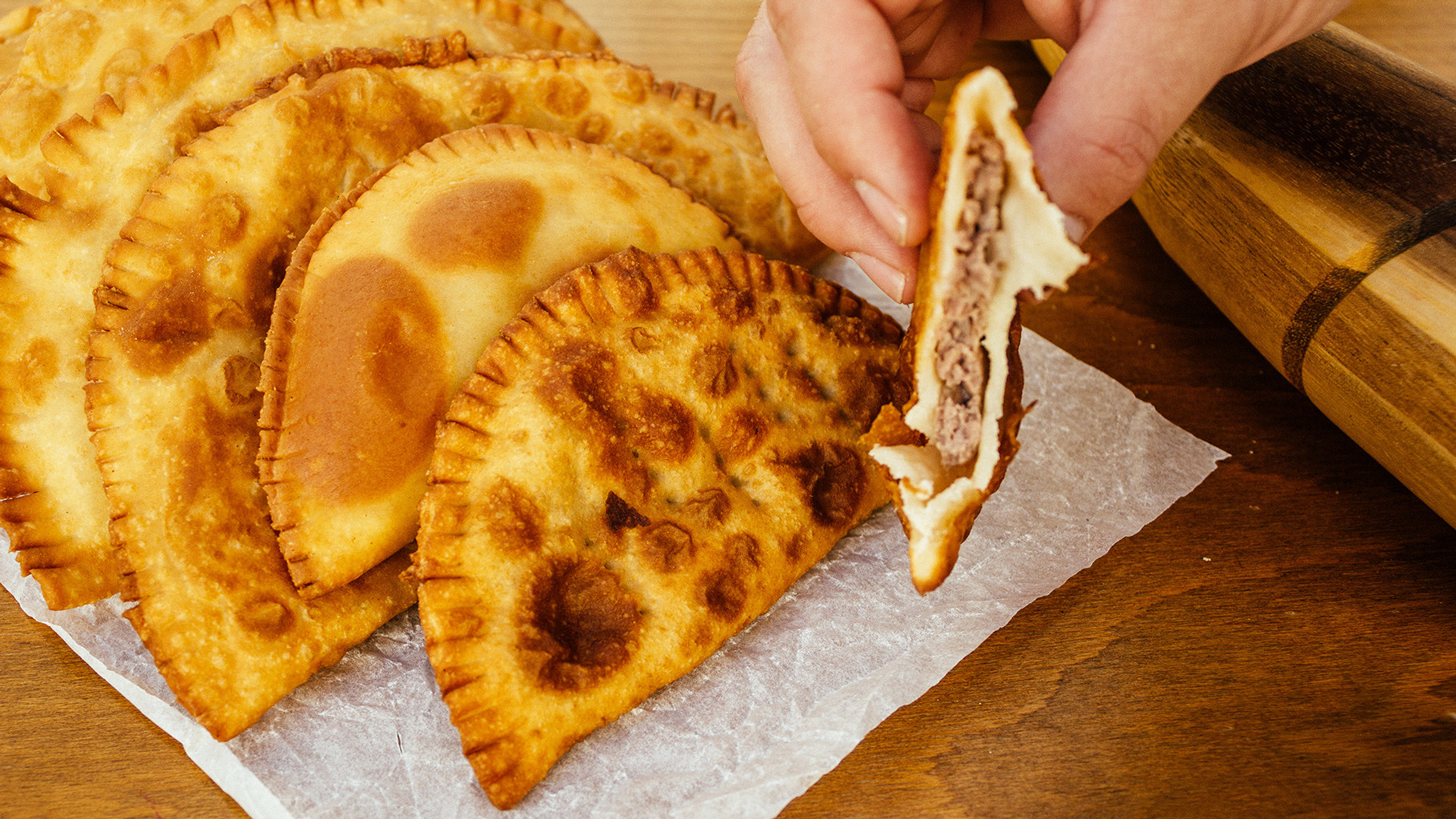