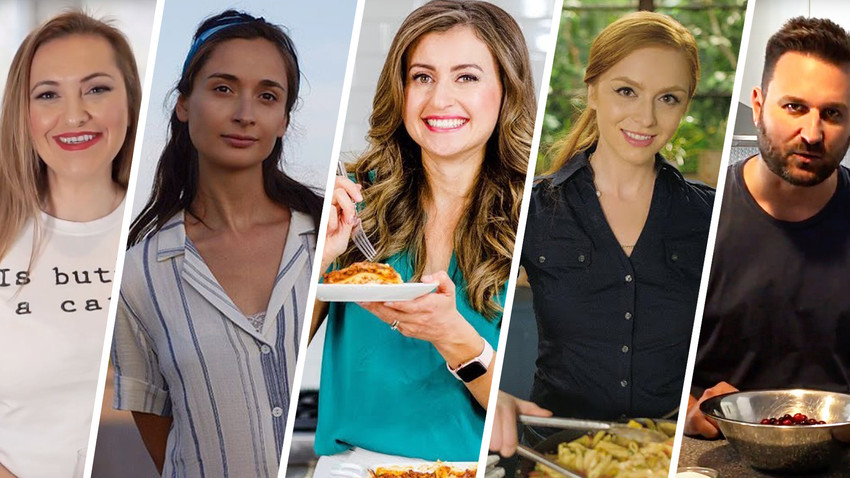 Natasha's kitchen, Tatyana's everyday food, Girl and the Kitchen, Peter's food adventures/youtube.com, Alissa Timoshkina
The delights of Russian cuisine are covered by numerous blogging chefs with Slavic roots. We present the most interesting.

Natasha Kravchuk started a food blog in 2009 to share her favorite recipes and events with friends and relatives. She now shares them with 5 million+ hungry followers. Natasha and her family moved from Ukraine to the U.S. when she was only four years old. She currently lives with her husband Vadim in Idaho, but her special love remains Russian and Ukrainian cuisine. Natasha’s motto is: “If you can read the recipe, you can cook it.” Video recipes in English are available on Natasha’s website and YouTube channel, and new dishes appear there every week.

Tatyana Nesteryuk makes video tutorials of Ukrainian, Russian, and East European recipes that she learned from her parents. She also shows how to cook Italian, French, and Asian dishes. Her YouTube channel with elegant recipes already counts more than 400,000 subscribers. In the near future Tatyana plans to release an English-language book entitled Beyond Borscht with traditional Ukrainian and Russian recipes.

3. Girl and the Kitchen

Hiding behind this name is Mila Furman, a professional chef of Russian origin living in the U.S. Her website Girl and the Kitchen features a large section devoted to Russian cuisine. Mila has an engaging personality and is always keen to try out the latest culinary trends on herself. She encourages people to think about what they eat and how much, and gives tips on staying healthy. For example, she recommends not beating yourself up about skipping breakfast, and suggests eating at least 2-3 full meals a day, not the micro variety, which only whet the appetite. That will keep the hormones and metabolism on track, says Mila. Mila’s recipes and gastronomic strategy are followed by more than 11,000 Instagram subscribers.

4. Borsch and No Tears

In her Instagram account (also with 11,000 subscribers), Alissa Timoshkina shares recipes of Russian cuisine that she picked up from her parents and grandmother. The recipes are given both with photos and in IGTV. Alisa organizes cinema-supper club meetups in London as part of the #KinoVino project, and recently released a book titled Salt & Time. Recipes from a Modern Russian Kitchen.

Men sometimes cook too! Peter lives in sunny Australia, but his Russian roots and childhood spent among the Russian community in not-so-sunny Canada prompted him to set up a blog with Russian and Soviet recipes. He is not yet as high-profile as the ladies in our list, but we have faith in him. Peter loves traveling just as much as cooking, so his blog features dishes from all over the world.

Read more: 10 food art ideas to get the pickiest kids to clean their plates (PHOTOS)