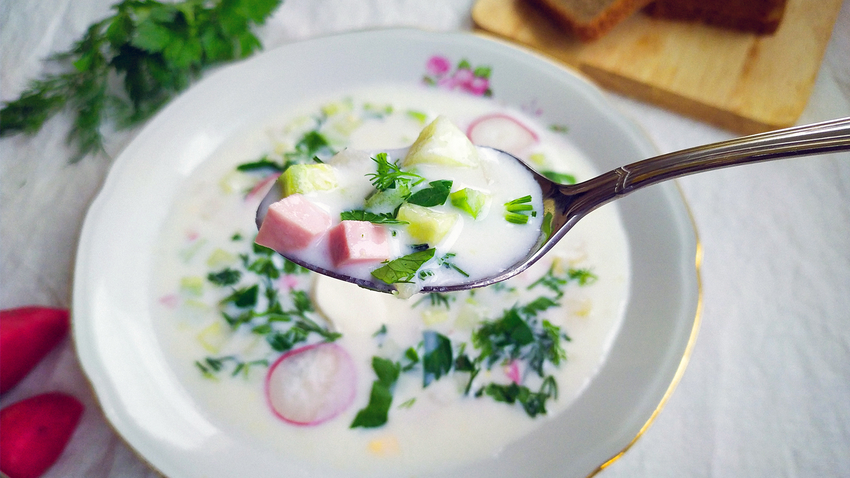 This cold soup was to die for on a hot summer day in the USSR!

Maria Afonina
No other soup pits people in Russia against each other in the same way okroshka does. We talk about what works best - kvass or kefir - and guide you through the whole process!

The first appearance of okroshka soup on record was in the Nikolay Osipov book ‘The Old Russian Homemaker, Housekeeper and Cook’, back in 1790. The okroshka there is made with different kinds of fried meat, onion, fresh and pickled cucumbers and sour cream. Pickle juice, kvass or stchi (sauerkraut soup) was recommended as stock. Vinegar sometimes also showed up in those old recipes - which can be explained by fresh meat being somewhat of a delicacy that few could afford. Obtaining fresh meat in the summer was difficult (livestock would be slaughtered in the fall), so salted meat was the way to go. But it was often tough and not salted properly. That’s where vinegar came in. And it stayed that way until the 1830s, when meat finally became more affordable to a larger portion of the population.

In the mid 19th century, okroshka - believe it or not - even used to be a delicacy, one that could often be seen on dinner tables during official functions and high-society parties in the capital. One prominent recipe consisted of adding lamb, veal, corned beef, ham and smoked beef tongue. Others included fish and various sorts of mushrooms. Stchi or “high-quality kvass” were used for stock.

So when did kefir show up? The mass production of the fermented drink began at the start of the 20the century in Russia, leading to a gradual acceptance of it in Soviet ideology as an important element for a healthy diet. Kvass wasn’t yet widely available at the time, while home production was too much of a hassle. Kefir was a great alternative.

Food historians also suspect that the Zakavkazye cuisine also played a big part. For example, the Georgian soup with matsoni, the Armenian spas or the Azeri dovga - all are close relatives to kefir-based okroshka. So, it’s no surprise that these days the cold soup is prepared not only with kvass, sparkling mineral water and kefir, but also with the use of Caucasian drinks, such as tan or ayran.

In addition to that, the Soviet deficit period also introduced pork sausage to the recipe, which was considered a poor man’s version of meat. And it’s still used to this day. 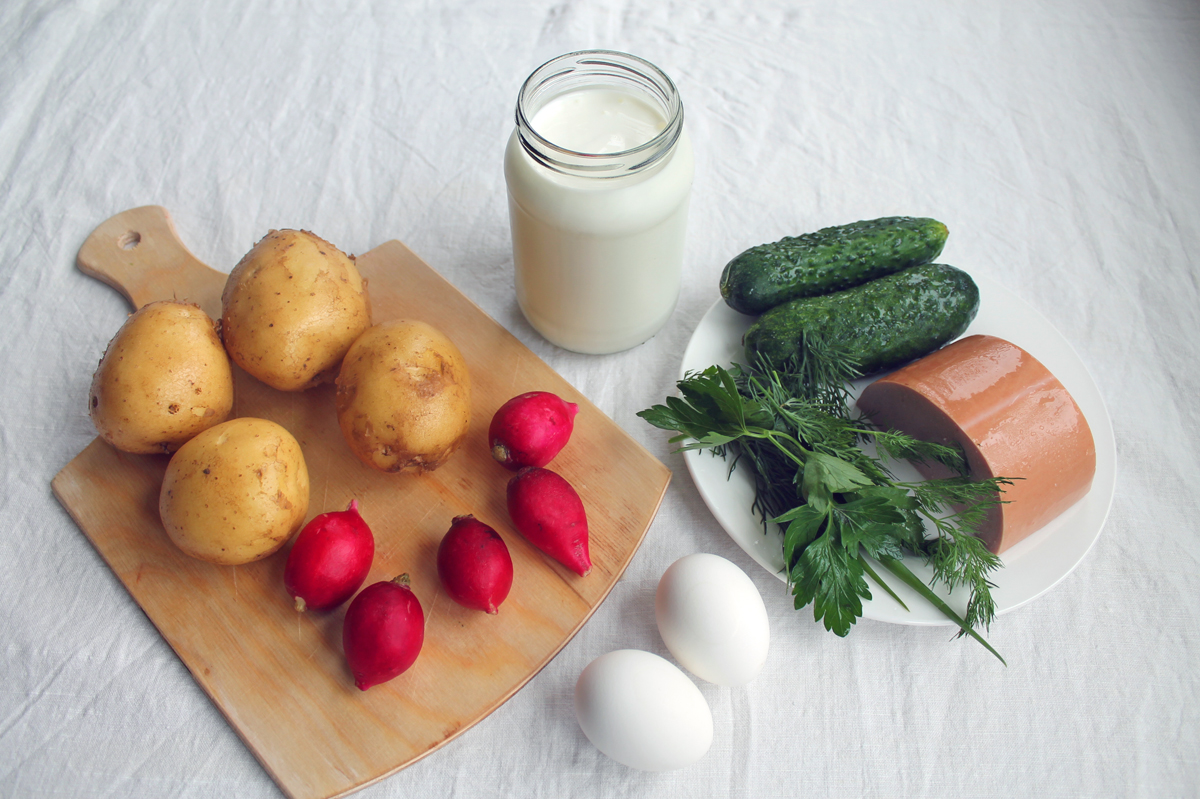 1. Boil the potatoes with the skin until ready. 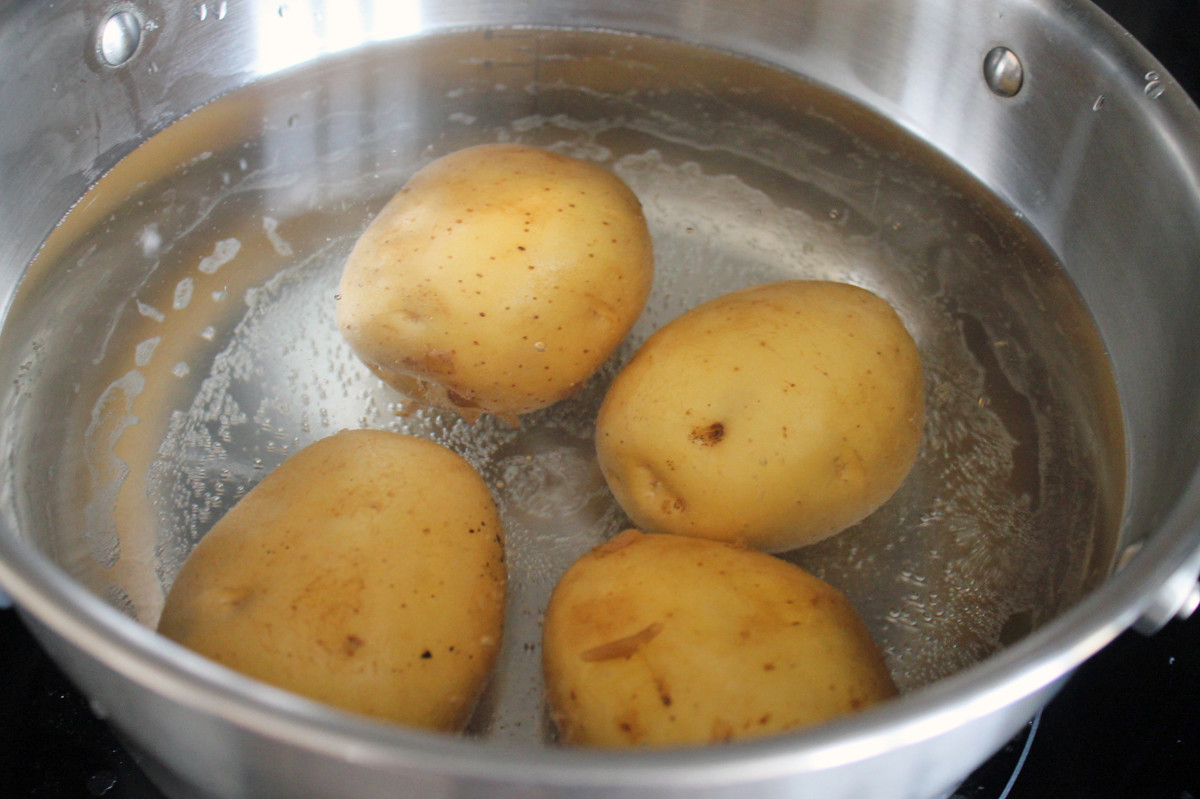 2. Hard-boil the eggs, peel and dice. 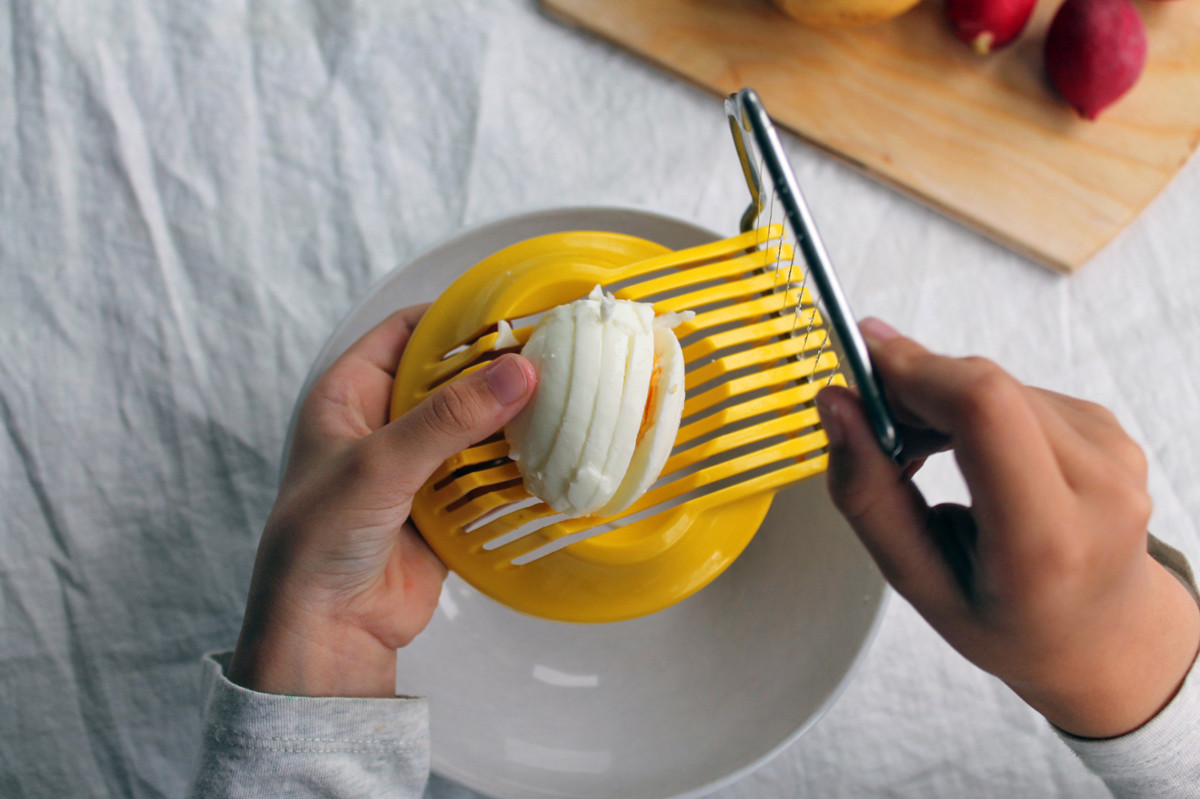 3. Cut the cucumbers (best to peel beforehand) and pork sausage into cubes. The sausage can be swapped for boiled beef. Chop the herbs and cut the radish into thin slices. 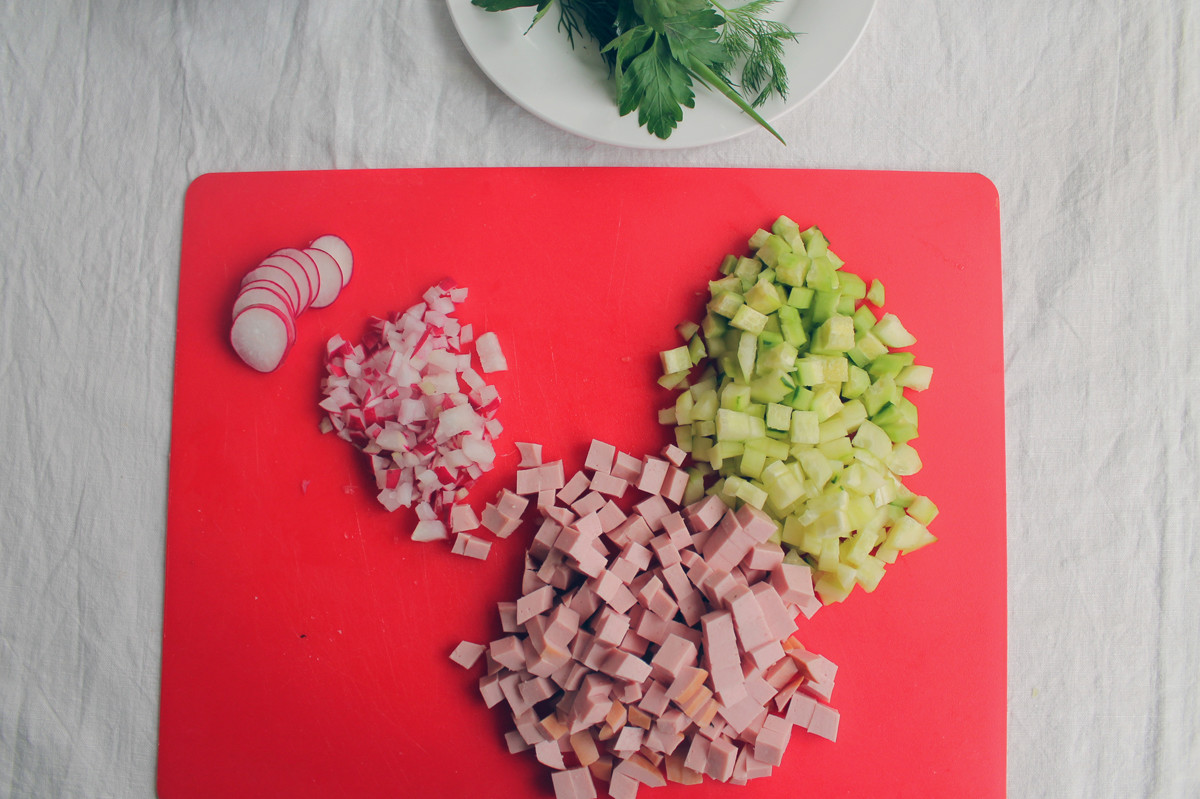 4. Cool the potato, then peel and cut into small cubes. 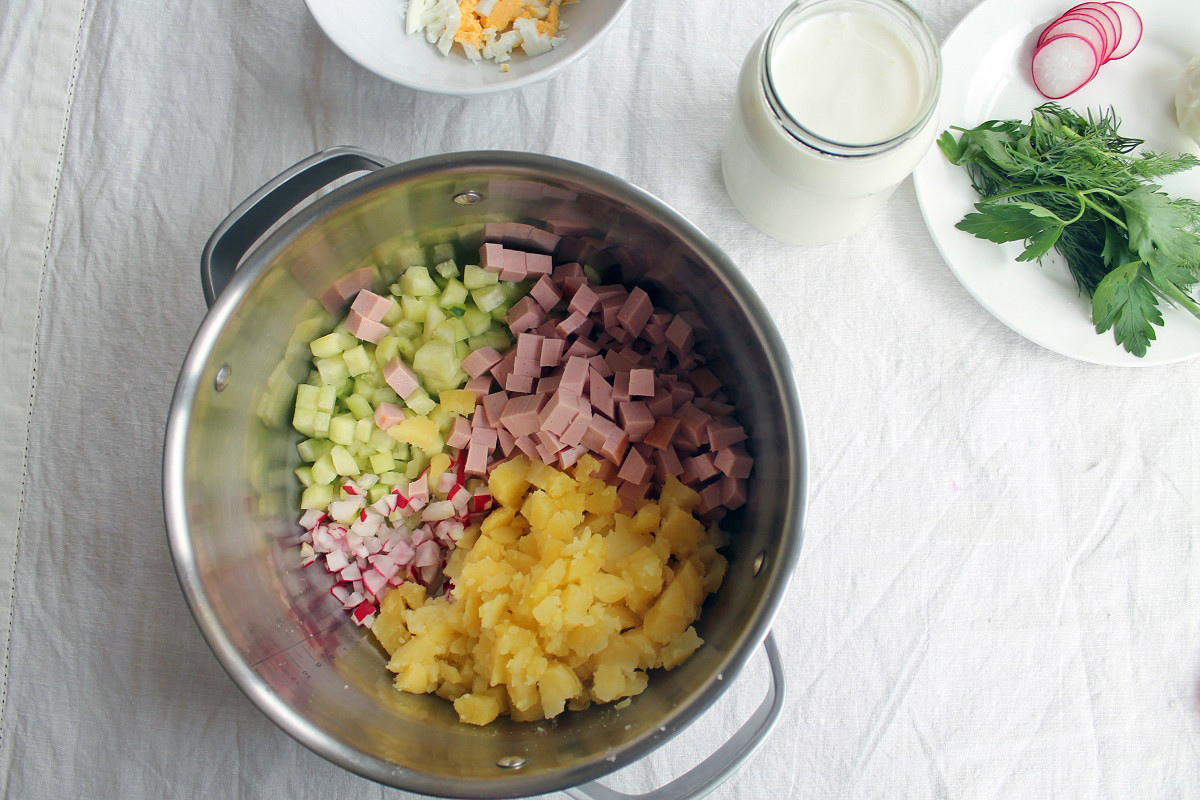 5. Put the potatoes, cucumbers, radish, egg and sausage into a pot. Cover with kefir and dilute with warm water (or sparkling mineral water) until the texture resembles a soup. Add salt to taste. 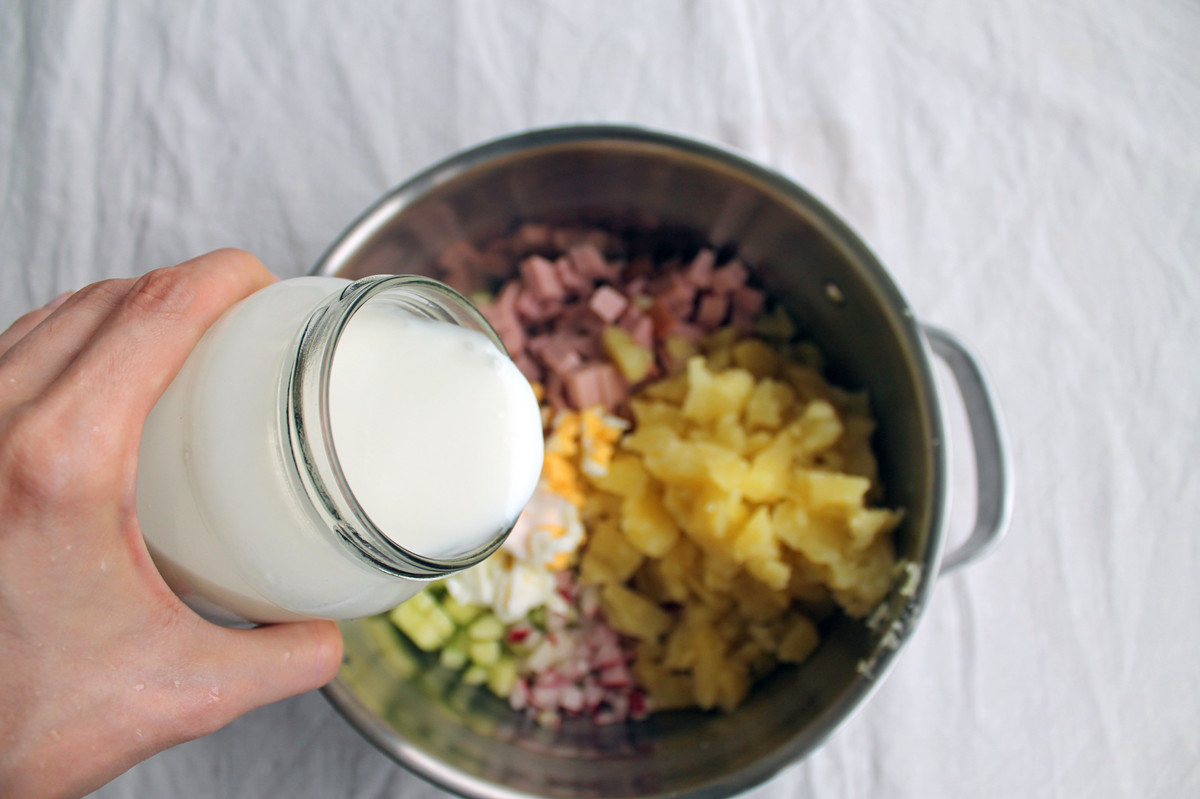 6. Serve with sour cream, herbs, and decorate with an egg half and some radish. Bon appetit! 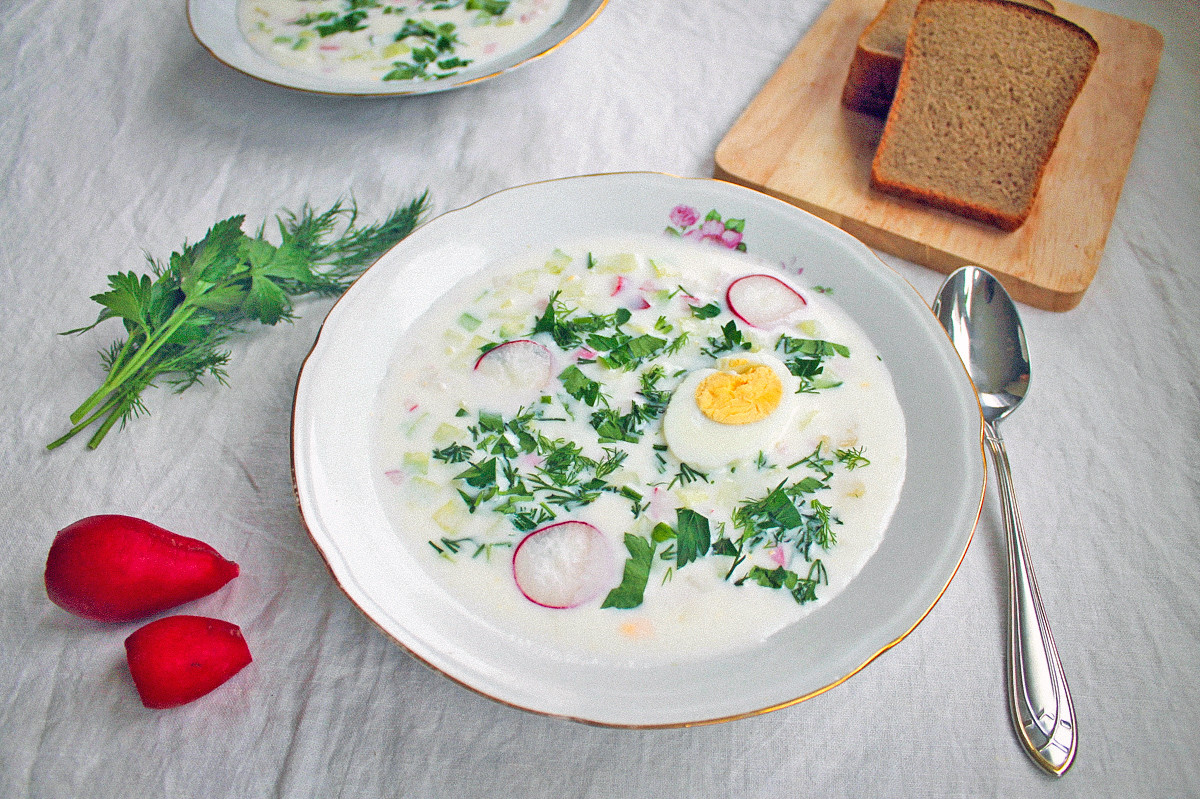