5 traditional dishes from Suzdal, the ‘most Russian city’ (RECIPES) 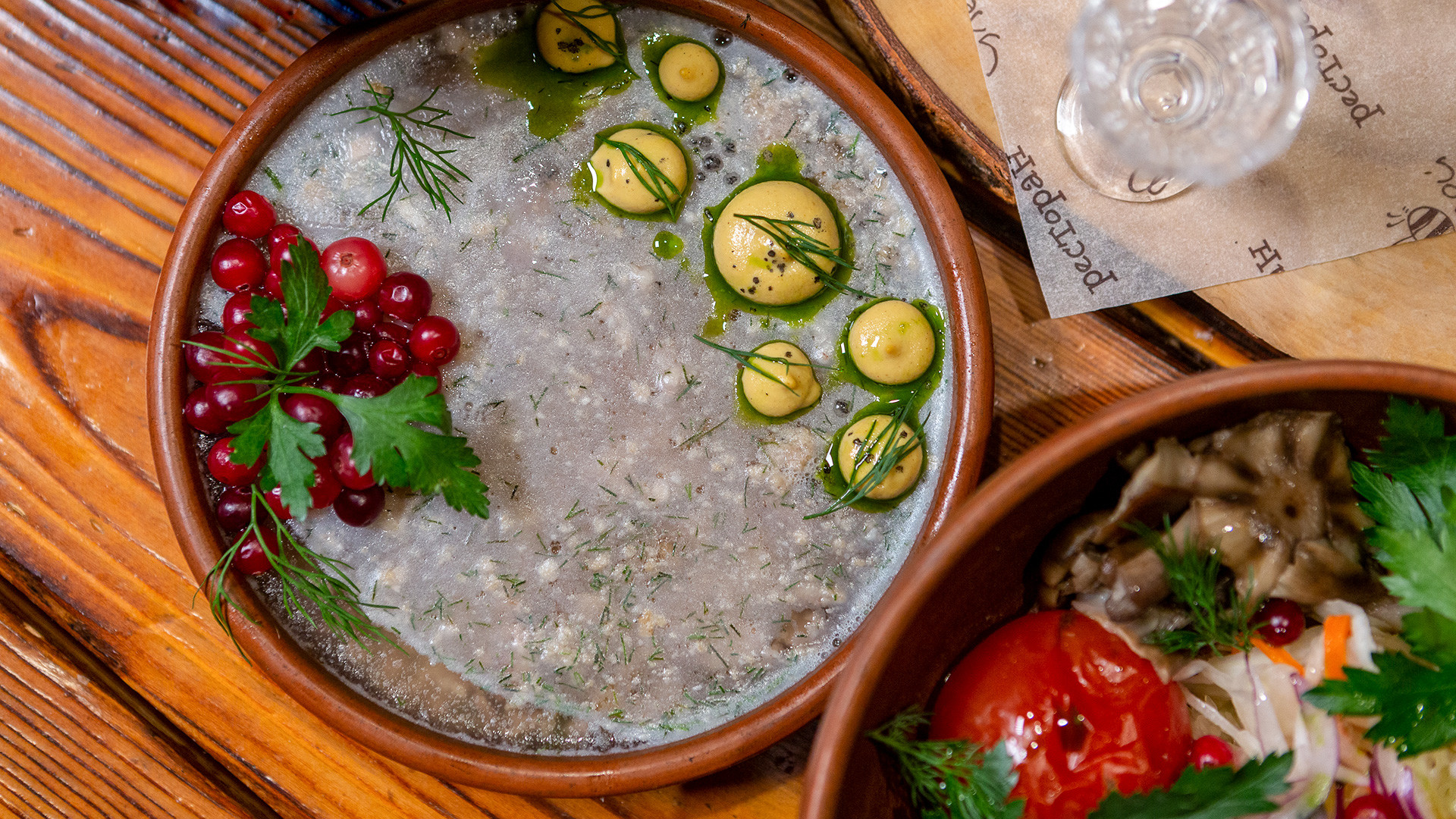 Kholodets served at the Uley restaurant in Suzdal.

Press photo
The following cake, salad and soup recipes have been voted the best in Vladimir Region by the national ‘Gastronomic Map of Russia’ project. Let’s take a gastro voyage to the famous town of Suzdal (and neighboring Vladimir)!

The ancient towns of Suzdal and Vladimir are these days the main tourist spots along the Golden Ring route: besides lots of Rus’ temples and wooden houses, there are old culinary traditions that have been preserved in the region. The ‘Gastronomic Map of Russia’ project calls these dishes the best in regional cuisine. So, what do the people there eat… and feed their guests? 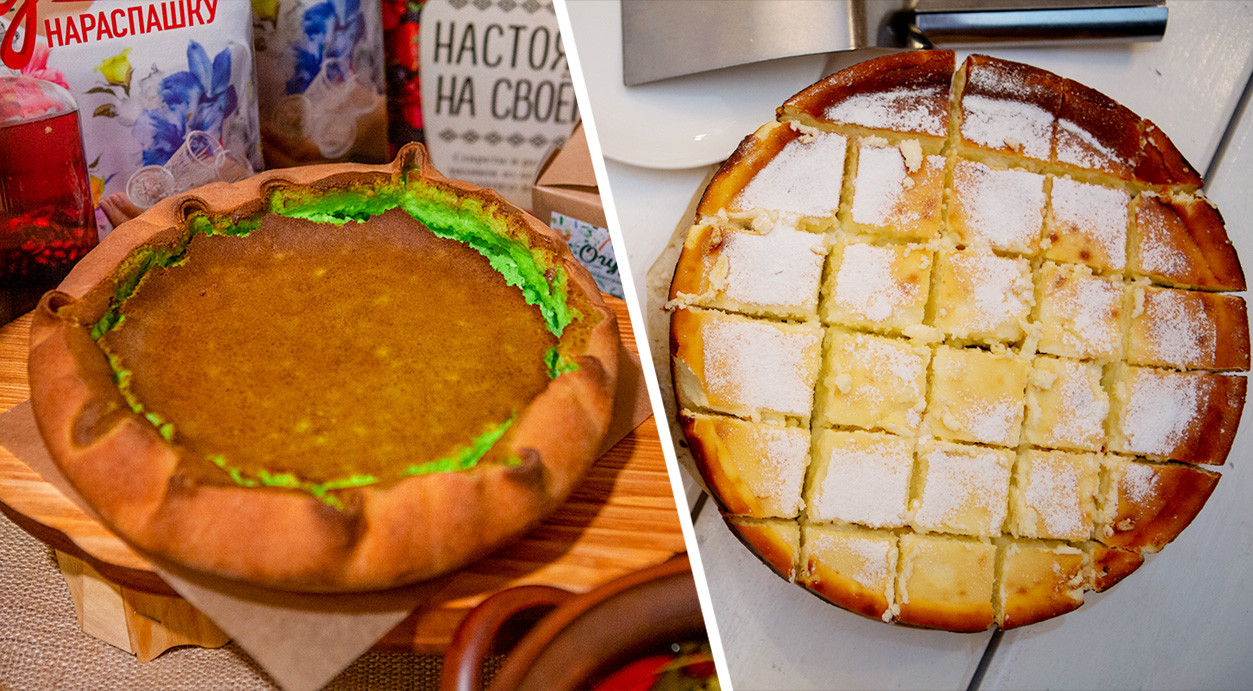 Tobolka is a kind of pastry with either sweet or savory filling. It takes its name from a bag for a trip - and these cakes were initially baked to take away. There are different types of tobolka cakes in different regions: For example, Perm folks make tobolka with fish, Vologda people - with mushrooms and millet porridge, Karelians make them with cottage cheese. In Vladimir Region, people bake tobolka as a big cake from the unleavened dough with tvorog filling (Russian cottage cheese). It’s similar to the tvorozhnik cake (you can find the recipe for it here) or a big vatrushka.

How to prepare the dough: Add milk, sour cream, egg, sugar and salt to the melted butter from the frying pan and mix. Then add the flour and baking soda. Once mixed well, the dough should rest for half an hour. Then put it into the baking form.

How to prepare the filling: add eggs and sugar to the tvorog (cottage cheese) and mix everything well (you can use a blender). Spread the filling in the form and bake the cake for 40 minutes at a temperature of 190 degrees.

Where to find it in Suzdal:

Modern chefs make this traditional regional cake with a modern twist: in the ‘Ogurets’ (“Cucumber”) restaurant, the cake is baked with cucumber syrup (!) and has a green color. In the restaurant at the Bogdarnya farm (established by John Kopiski from the UK), you can find a more creamy cake from the local dairy. 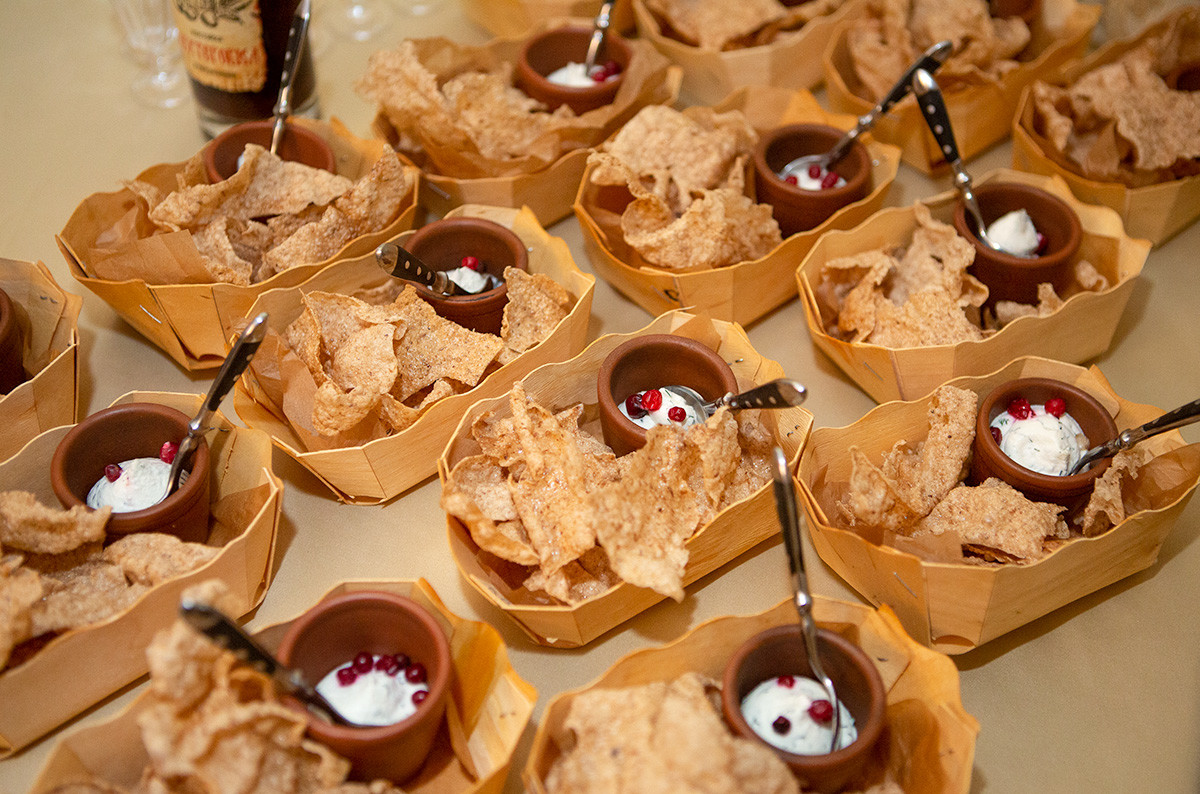 Chips from the Ogurets restaurant.

This ancient snack is a healthy and simple idea for those who like crunching during a movie or TV show in the evening. You know that Russians are CRAZY about grechka (buckwheat) and are ready to eat it from dusk till dawn. In Suzdal and Vladimir, such “chips” are served in restaurants and sold in souvenir kiosks. However, you can also make them at home.

salt (or other spices for taste)

How to make buckwheat chips: the needed consistency is achieved when you have 1 part wheat and 4 parts water, then you grind it with a blender and put the mass on a baking tray. Dry it in the oven for 3 hours at a temperature of 60-80 degrees with convection mode (if your oven allows for this) after which you break it into small bite-sized pieces. Movie time!

Where to find some in Suzdal:

Classical buckwheat chips with dips are served in the Gostiny Dvor and Ogurets restaurants. 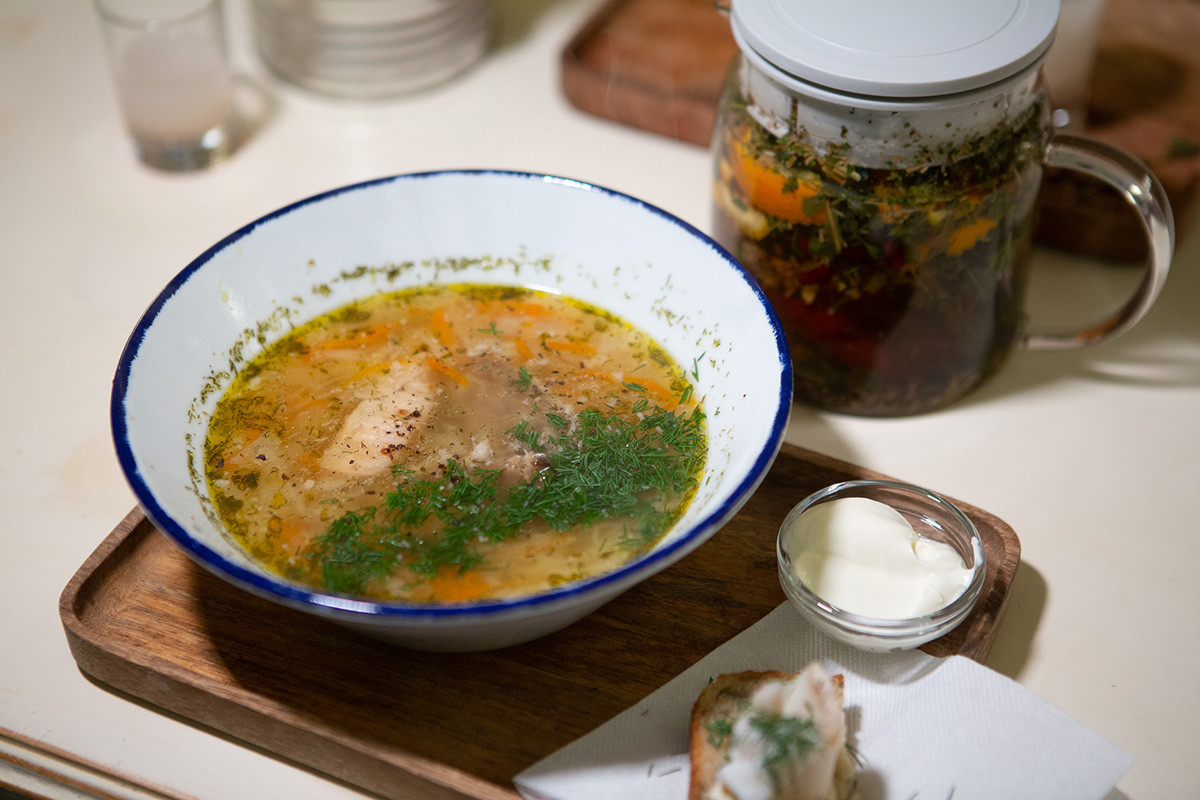 Russians have had to make preparations for the winter since ancient times. Frozen cabbage soup is also a kind of traditional way of making shchi in advance, a process which is still popular in the Golden Ring region. The idea is to freeze the soup by leaving it outside (or alternatively you can freeze it in a freezer). The frost supposedly makes cabbage softer. Another kind of recipe includes freezing only the vegetable base for shchi, that should be added to the fresh broth when cooking. In Russia, there are thousands of shchi recipes, depending on the region and on personal taste. Here is the one with fermented cabbage.

How to prepare: Slice the potato and cabbage and add to the broth, then fry the carrot together with the onion and also put them into the broth. Then add the meat and spices. Cook on a slow flame (or better in the oven) until the potato is ready and leave for a couple hours on the stove. Then freeze the soup overnight and eat the following day heated.

Where to find it in Suzdal and Vladimir:

This soup is included in the regular menu of the ‘Gnezdo Pekarya’ (“Baker’s Nest”) cafe in Suzdal. Another interesting version of cabbage soup is served in the ‘Okolitsa’ (Surroundings”) restaurant in Vladimir. There you can try “grey shchi” baked in the oven.

4. Kholodets (jellied meat) in the oven 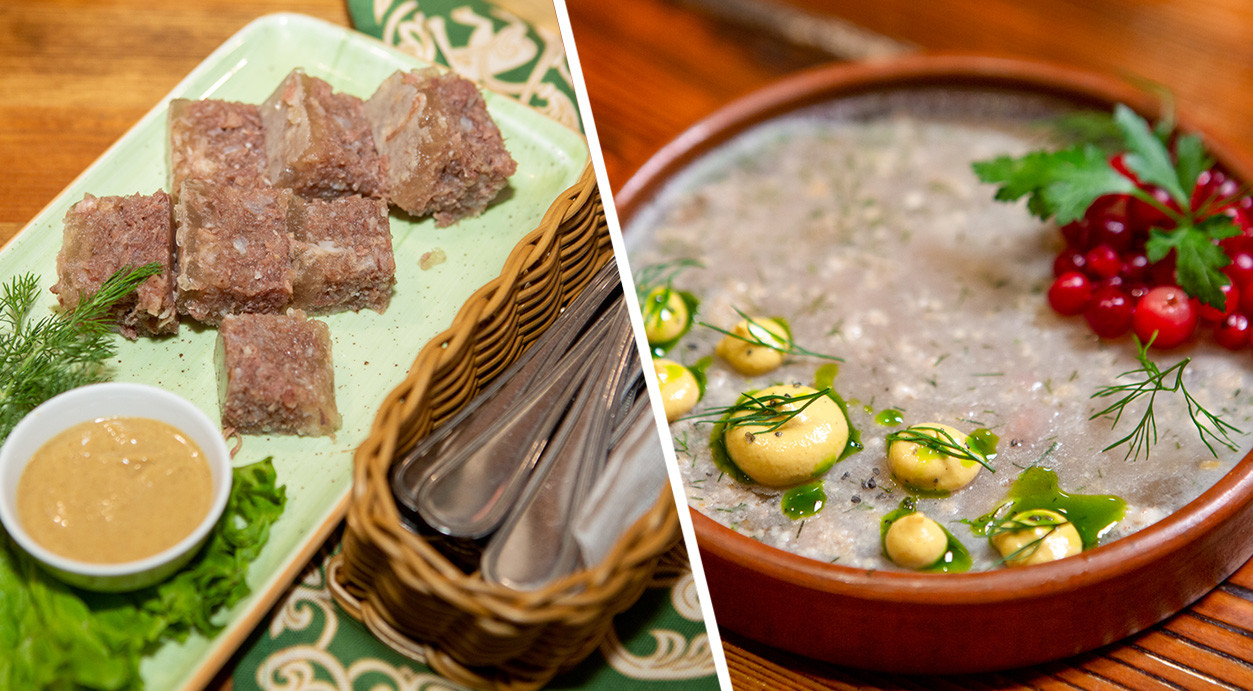 This jellied dish confuses many foreigners: some try to warm it, while some simply cannot understand the reasons to eat it. However, it’s a very healthy dish full of collagen - of course, if you want to cook it correctly, the ancient way - it is prepared without gelatin! The traditional Slavic recipe required an ancient oven, but modern people can use a stove. Kholodets is usually served with horseradish - and the people of Vladimir are proud to call their town the home of the most spicy variant of this plant.

2.5 kg of meat (preferably pork or beef knuckle, with bone)

How to prepare: Put the meat into a 5-liter pan with water and boil, then pour out the broth, add fresh water (it should be 3-4 cm higher than the meat) and boil again, removing the foam. After boiling, put on a minimum flame and leave it for four hours (yes, it’s long!) or put it in the oven for the same amount of time at a temperature of 180 degrees. Add salt, pepper, the onion, sliced carrot and cook for another hour. When ready, separate meat from the bones, put it in a bowl and pour the clear broth over it. Leave overnight.

Where to find it in Suzdal and Vladimir:

In the ‘Okolitsa’ restaurant, beef kholodets is cooked in a real Russian oven designed by local craftsmen). The ‘Uley’ (“Beehive”) restaurant makes kholodets from wildfowl with forest herbs. 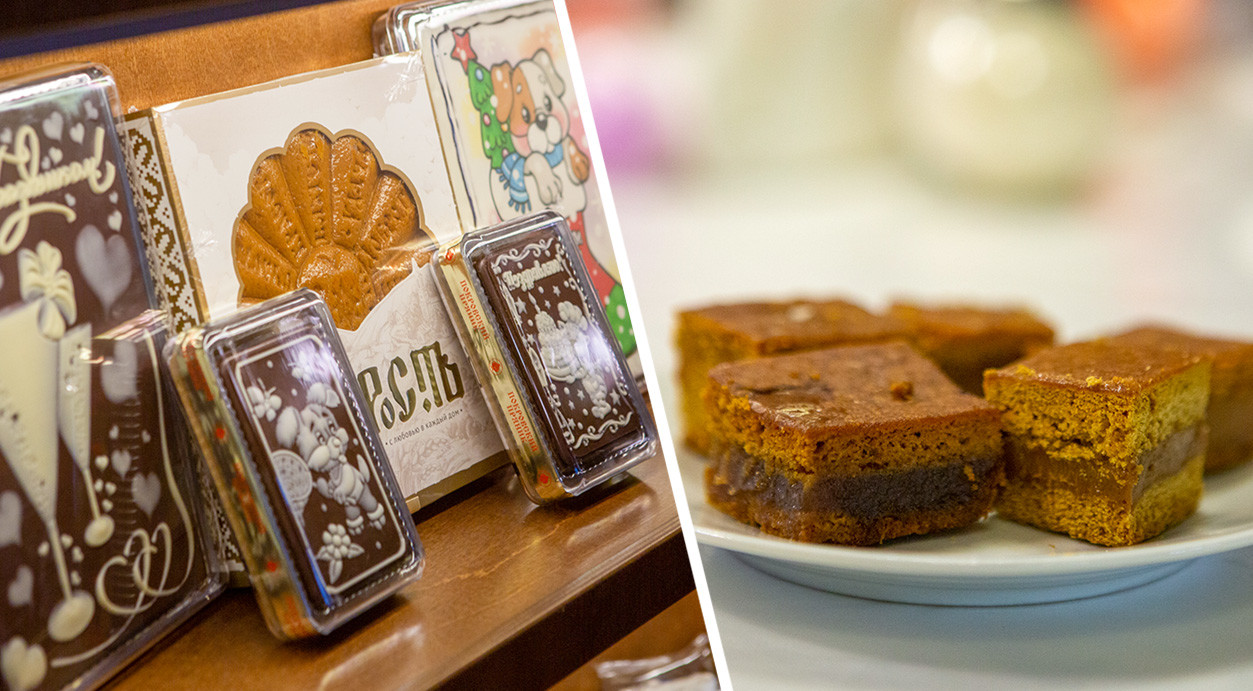 The small town of Pokrov near Vladimir is famous for its amazing gingerbreads with boiled  condensed milk and nuts. The exact recipe of the Pokrov plant is kept a secret, but here is the version to cook very similar sweets.

How to prepare: Mix the eggs, sugar, butter, cocoa, spices, honey, baking soda and steam cook for 10 minutes. Then add the flour and the oil and make a dough. Leave it overnight. Divide the dough into 2 parts, roll out a thin layer (3 mm thick) onto baking paper. Spread the filling and cover with the second part of the dough. Bake in an oven preheated to 170-180 degrees for 25 minutes. Cover the warm gingerbread with a glaze (2 tbsp. of water + 2 tbsp. of sugar, cook for about a minute and beat in a blender until white) or simply sprinkle some sugar powder.

Where to find it in Vladimir Region:

The gingerbread factory with cafe and shop is located in the central Pokrov, but you can also find it in any souvenir shop in Suzdal and Vladimir.