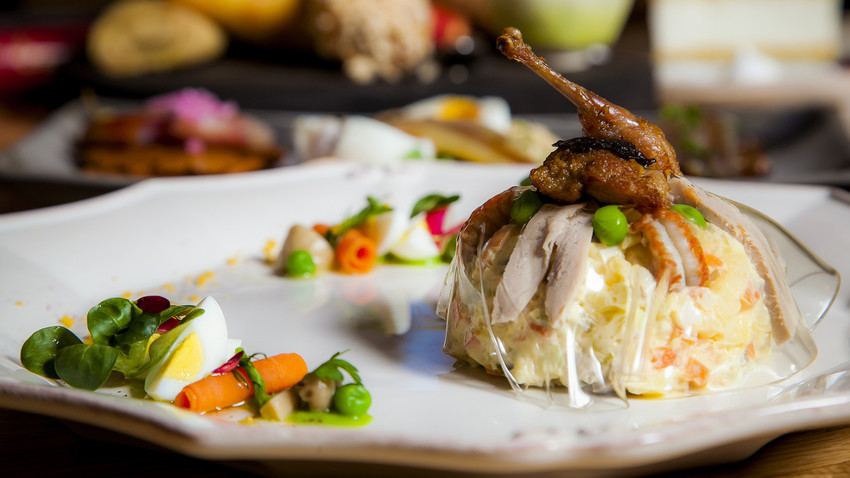 Restaurant Matreshka
We explain the origins of this famous salad, and share a recipe to water the mouths of both lovers of Soviet cuisine and those with a penchant for Tsarist Russia.

Known internationally as Russian salad, in Russia itself the dish is named after Lucien Olivier, a Moscow chef of French descent who plied his trade at dinner parties for the wealthy. The menu of his Hermitage restaurant listed a popular hors d’oeuvre taken with an aperitif: wild game mayonnaise.

“Mayonnaise was once the name given to a dish made of meat, fish, poultry or wild game. Lucien Olivier’s appetizer consisted of hazel grouse, crayfish necks, gherkins and truffles, and was served with a special sauce of his own creation,” says Vladislav Piskunov, culinary writer and brand chef at Moscow’s Matreshka restaurant.

The appetizer, now in great demand, started bearing its creator’s name. Since the late 19th century, the recipe has been published in cookbooks everywhere. In the Soviet collection of recipes The Book of Tasty and Healthy Food, the pricey truffles and crayfish necks were replaced with boiled eggs, carrots, apples and green peas.

“This type of salad was called Stolichny [Capital]. At the same time, émigrés yearning for dishes from their homeland reinvented Olivier’s recipe for themselves, using sausage instead of hazel grouse: that is how ‘Russian salad’ conquered the world, becoming the most common version of Olivier,” says Piskunov. 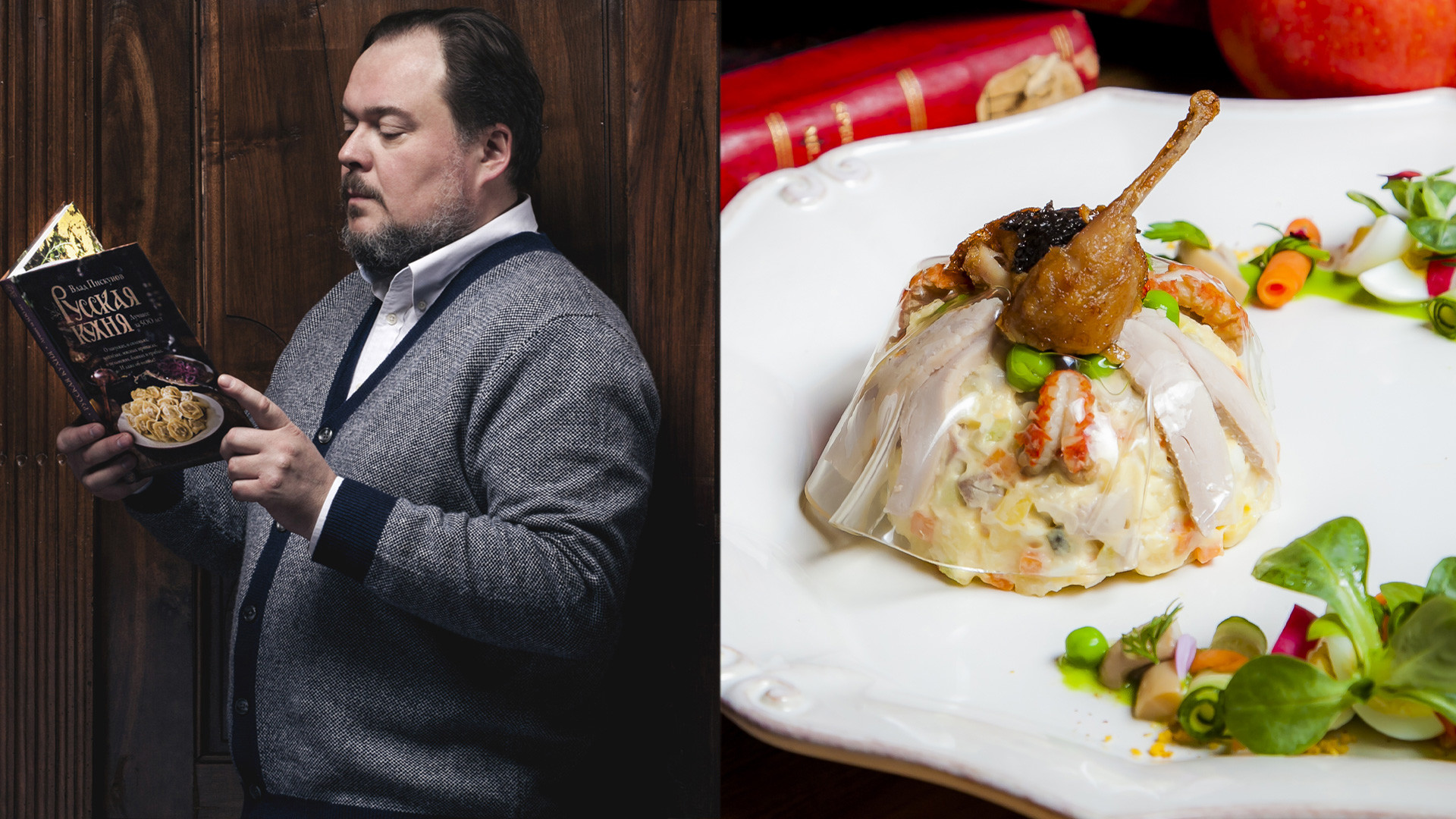 Piskunov bases his salad on a recipe that combines the well-known Soviet version with the “bourgeois excesses” described in pre-revolutionary literature.

“We can no longer imagine Olivier without carrots, because they impart sweetness, although they are not in the original recipe. On the other hand, we add such now rare ingredients as lanspik (a thin sheet of aspic), crayfish necks or capers. They make the salad more festive. The main component of Olivier salad is poultry meat, which is even better than game. All delicacies, like black caviar, are totally optional,” explains the chef. 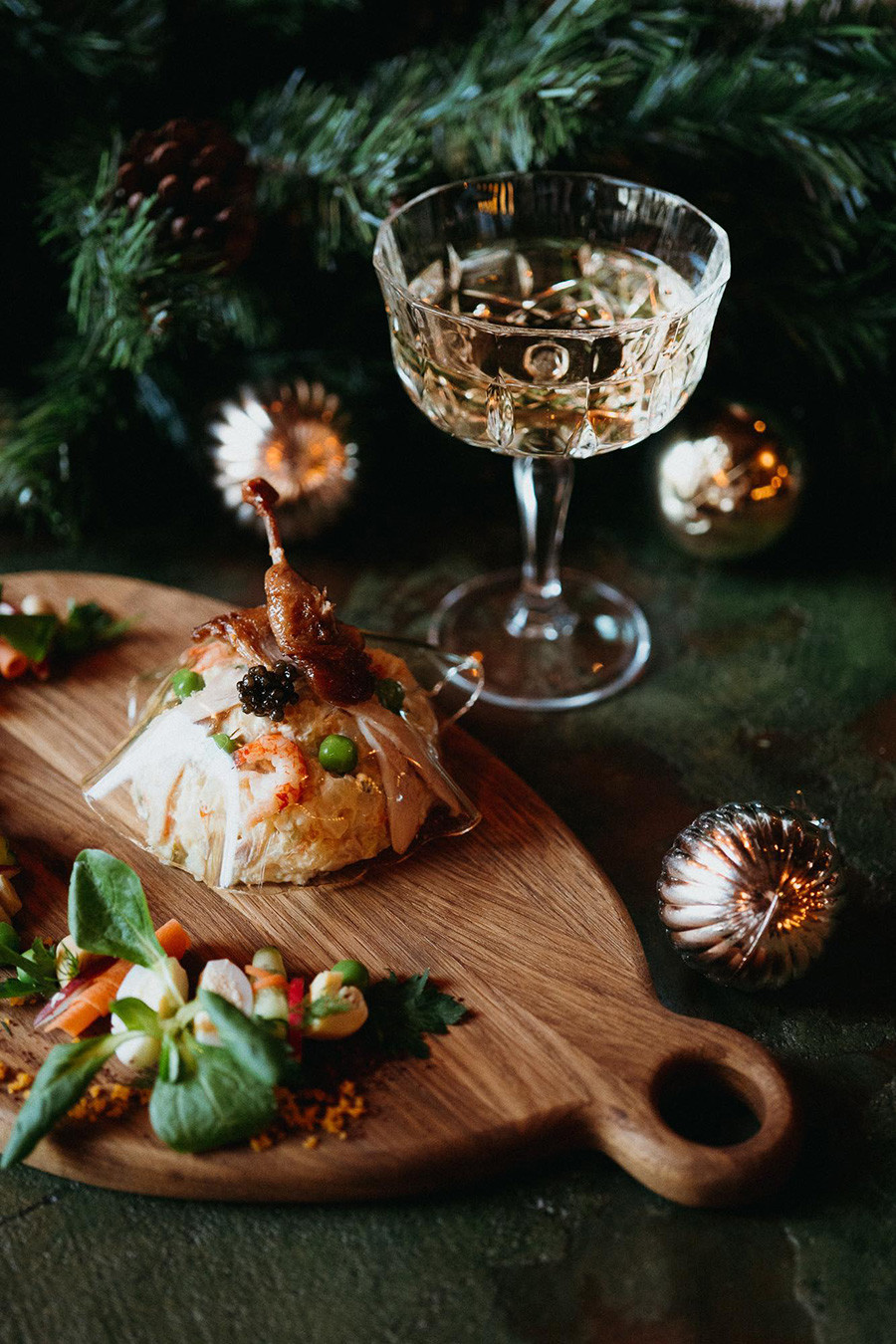 1. Mix all the dressing ingredients, add salt to taste.

3. Add the dressing and stir. Place on a semicircular plate.

4. Decorate with the green peas, crayfish necks and pieces of boiled quail fillet.

5. Cover with a thin layer of lanspik. For a tsarist flourish, place a quail’s foot on top.