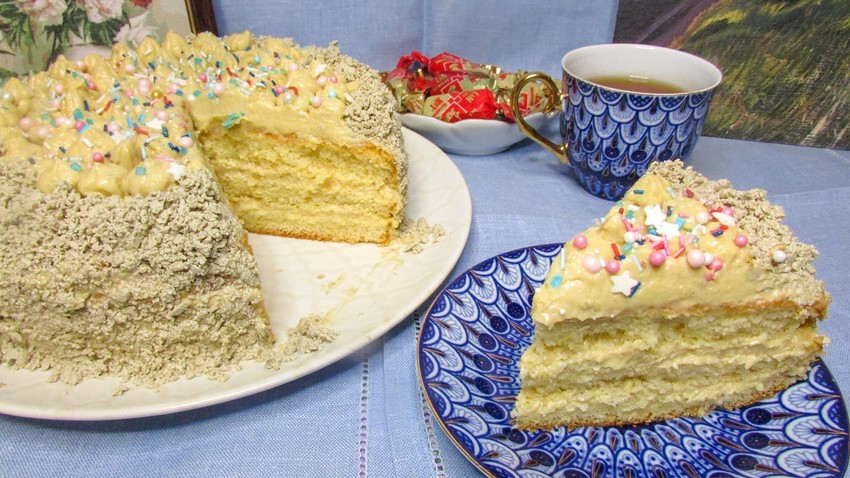 You’ll be tempted to devour this delicious Soviet-era cake like there’s no tomorrow.

Olga Brovkina
Here’s a recipe for an unexpectedly pure white cake with a crunchy cream named after a Slavic woman.

Even 30 years after the collapse of the Soviet Union, people born and raised there become very nostalgic whenever they compare the contemporary world with that of life in the 1970-1980s. Take cakes, for instance - Praga, Skazka and Napoleon. All were cooked in an old-fashioned confectionery not that long ago.

Today, let’s talk about the cake Slavyanka that was once sold in hard-to-find bakeries and central Moscow shops, and which cost about 3 rubles. One place to find Slavyanka was at Prague Restaurant on the corner of then Kalininsky Avenue and Arbat Street; another place was at Budapest Restaurant close to Kuznetsky Bridge. The queues were long and exhausting, and it was a remarkable success if you managed to buy one.

Why was Slavyanka so popular, you may ask? Because no one could guess the cake’s secret ingredients. Everyone noted the cream’s peculiar taste, something crispy and sweet, but it was impossible to tell exactly what it was. That’s why many Soviet women were so eager to find Slavyanka’s recipe, and how bewildered they were when the recipe was revealed. The secret ingredient was simple halva – so finger-licking good and which could be bought in every shop at that time.

Another peculiarity of Slavyanka was its unusually white-as-snow cream color. It was common at that time to make cream using butter and condensed milk, which is why exactly this cream was distinguished by its pure white color. When combined with condensed milk, the cream was irresistibly tasty. This recipe is a great example of how to make a delicious masterpiece from simple ingredients.

If in Soviet times it was quite a challenge to bake a sumptuous cake due to the lack of home appliances, now it’s a real pleasure. That’s why I suggest we cook this forgotten but now nostalgic taste from our moms’ youth. 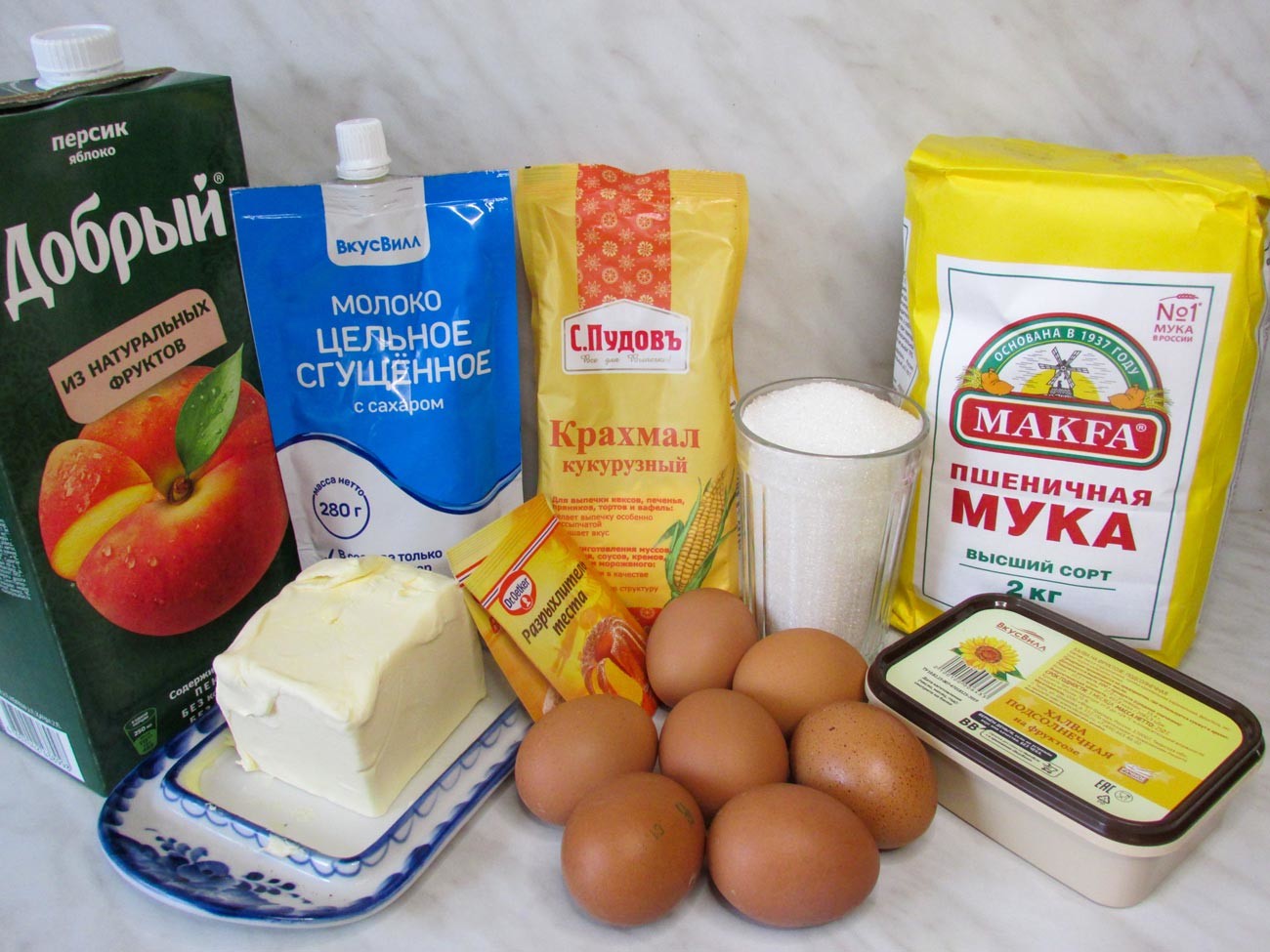 1. We’ll begin with baking the sponges. Pour the eggs into a whipping bowl, add salt, and start mixing at slow speed. Then gradually increase the speed and in several steps add sugar. The mass will become white, homogeneous, and very fluffy. 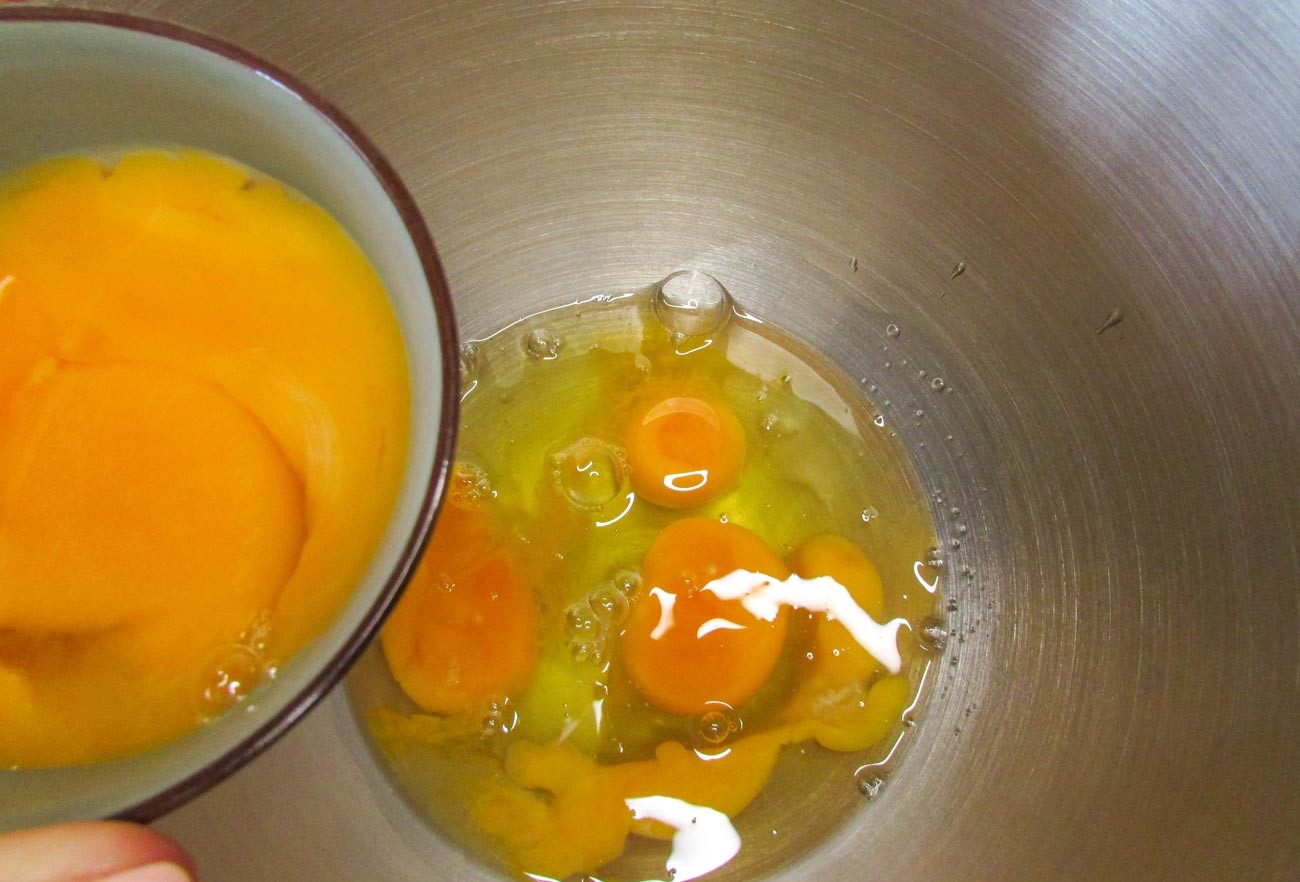 2. Gradually add the flour mixed with cornstarch, vanilla, and the baking powder into the eggs, mixing in slowly. 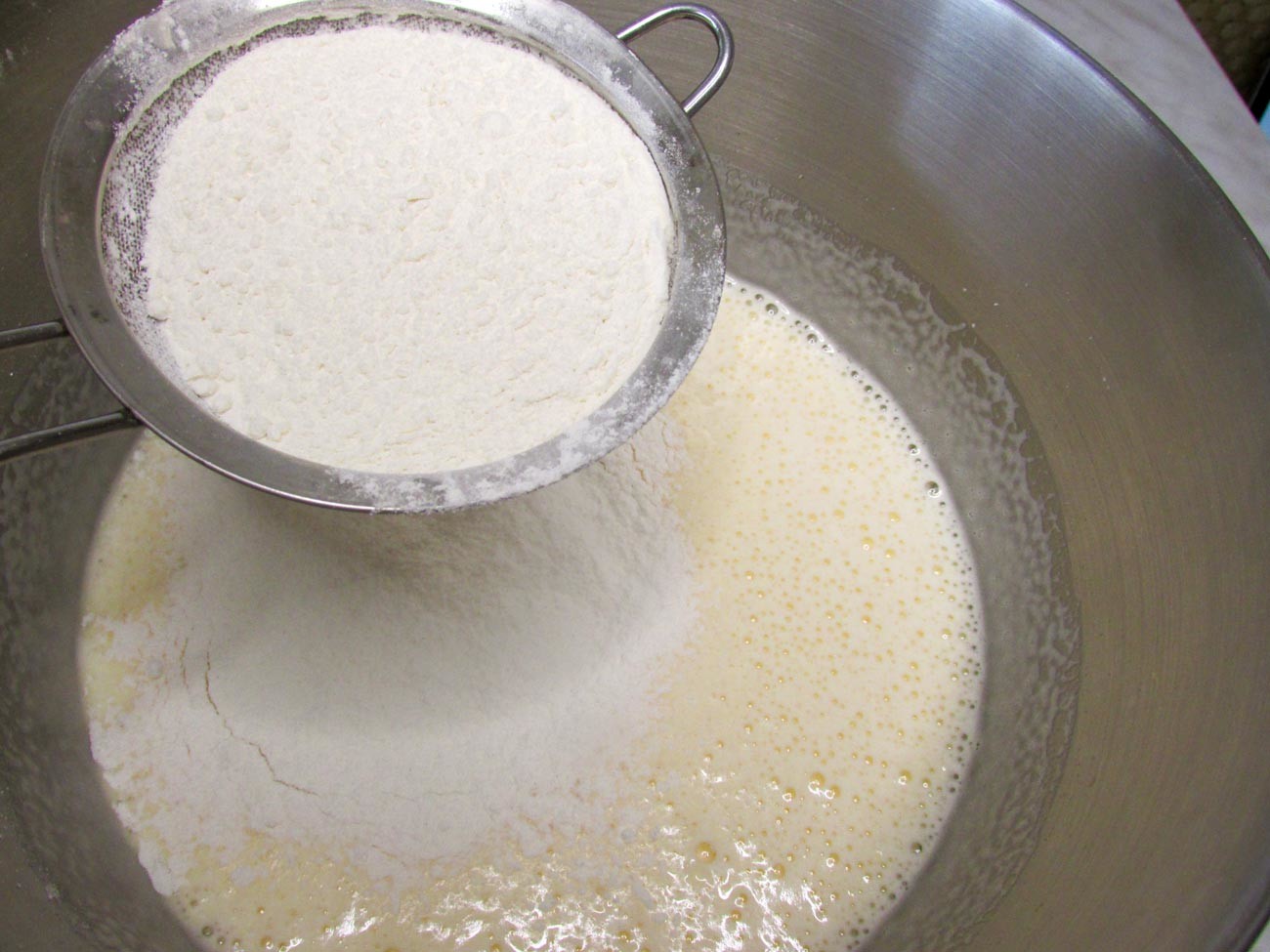 3. Pour the dough into the form and put it into the oven. Turn on the heat at, let’s say, a temperature of 160 degrees Celsius. This is also a working lifehack if you want to escape a dough bump. Put the dough into the not yet preheated oven. In nine out of ten cases you’ll get a smooth surface for the sponge.

4. In the meantime, while baking the sponge, let’s make the cream. Remove the butter from the fridge beforehand; it must be very soft. Prepare the necessary ingredients. 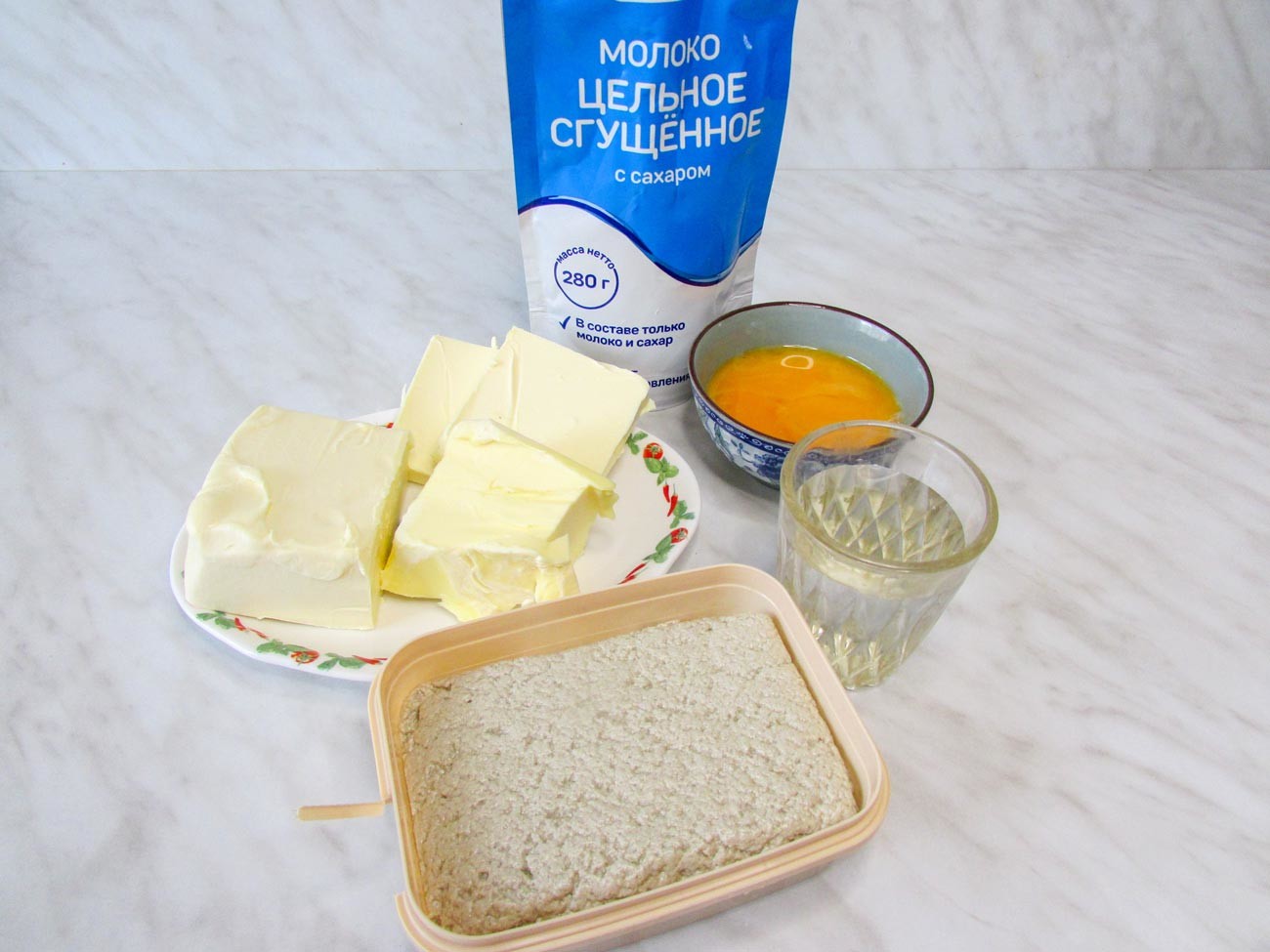 5. Mix yolks, water, and condensed milk in a thick bottom pan. Stir with a utility whisk until you get a homogeneous mass. Place on the stove, preheated below medium. 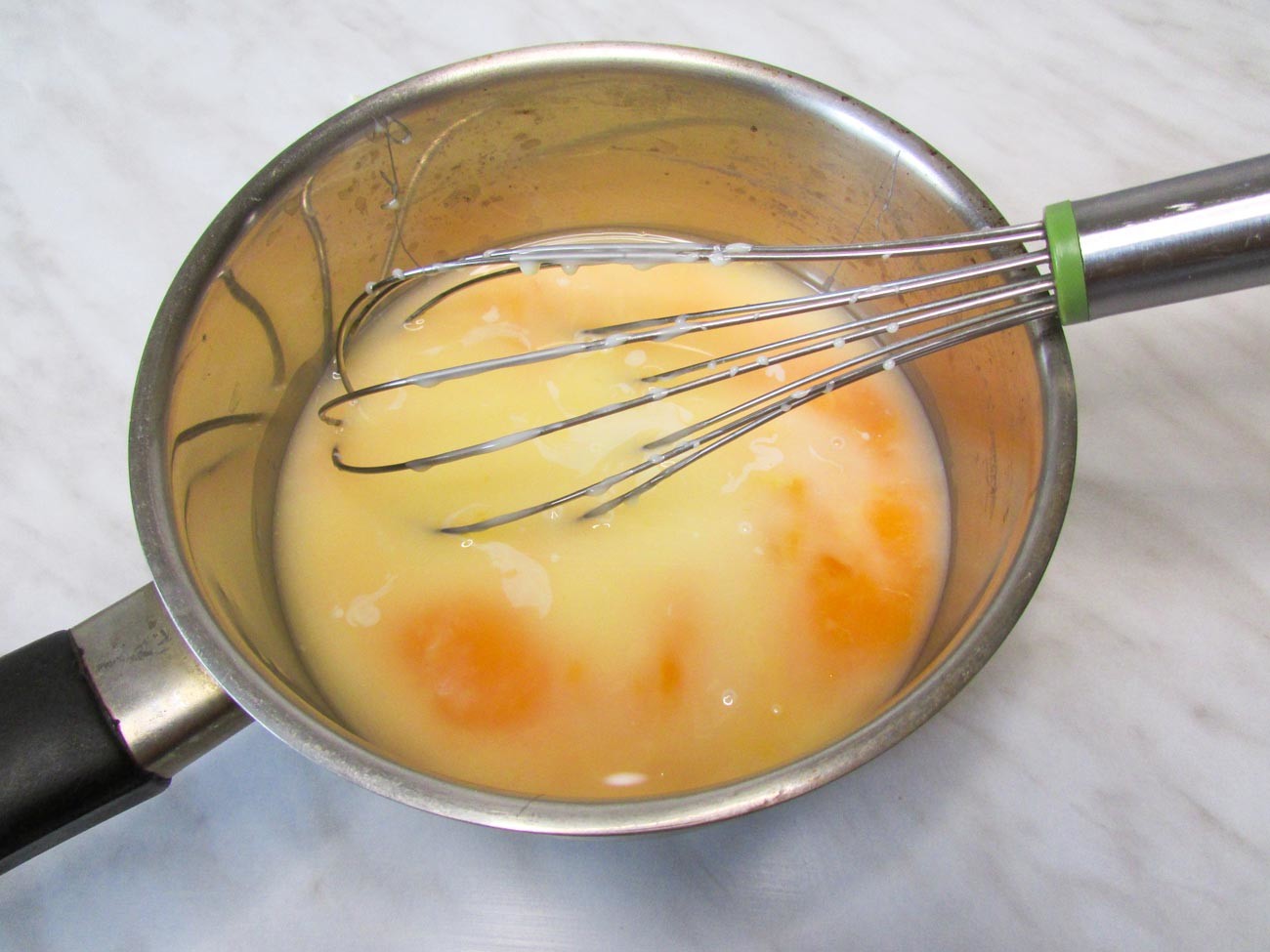 6. Constantly stirring, bring it to a boil, and stir for a couple of minutes. Let it cool. I put the mass on the plate to cool and I wrap the plate.

7. My sponge was baking for 45 minutes; sometimes it takes more time, sometimes less, depending on your oven. Then, take it out of the oven and remove the parchment paper and let it cool. Cut the sponge into three even pieces. 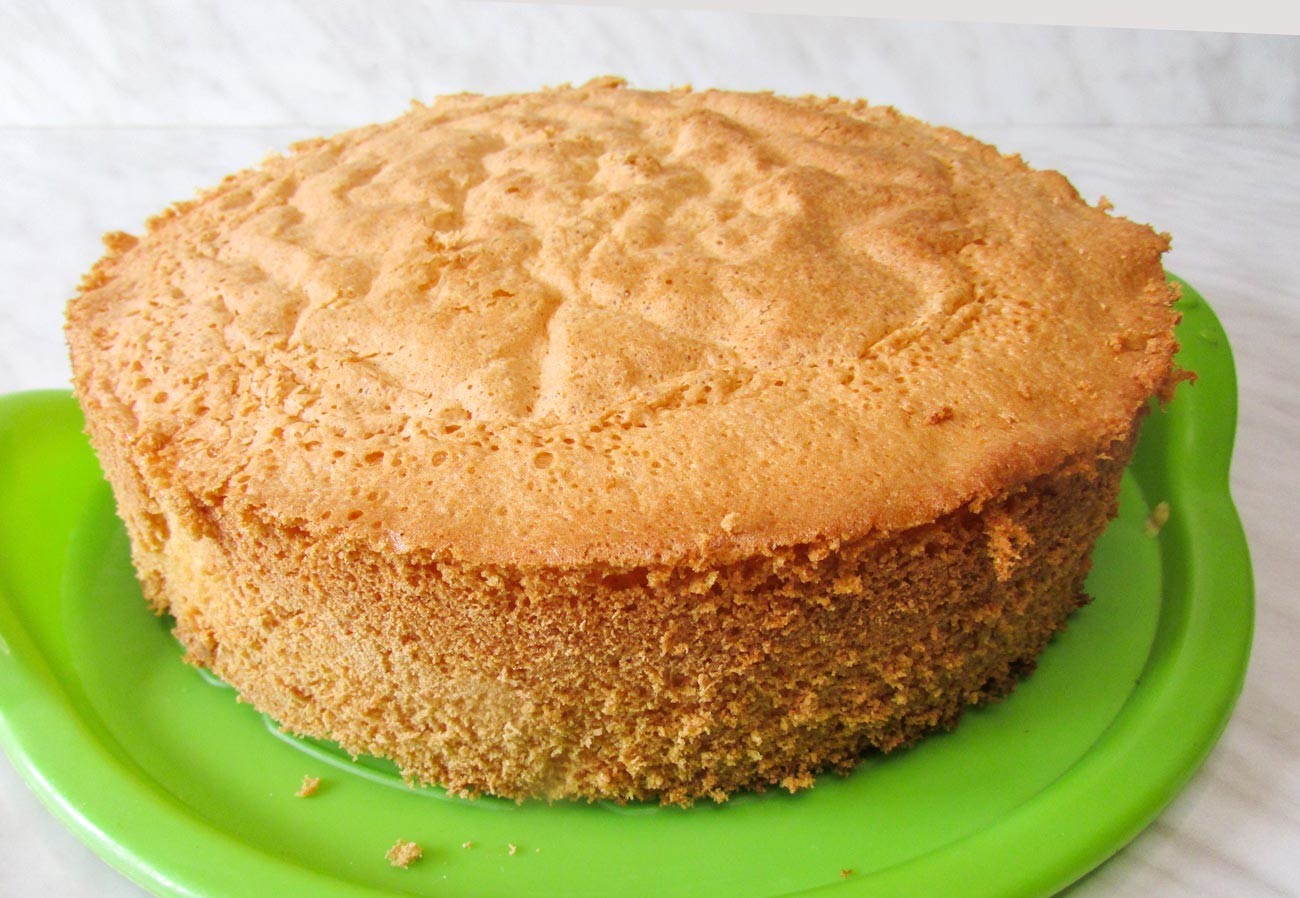 8. When the boiled mass has cooled and the butter is soft, mix carefully at high speed until it’s crystal white and fluffy. 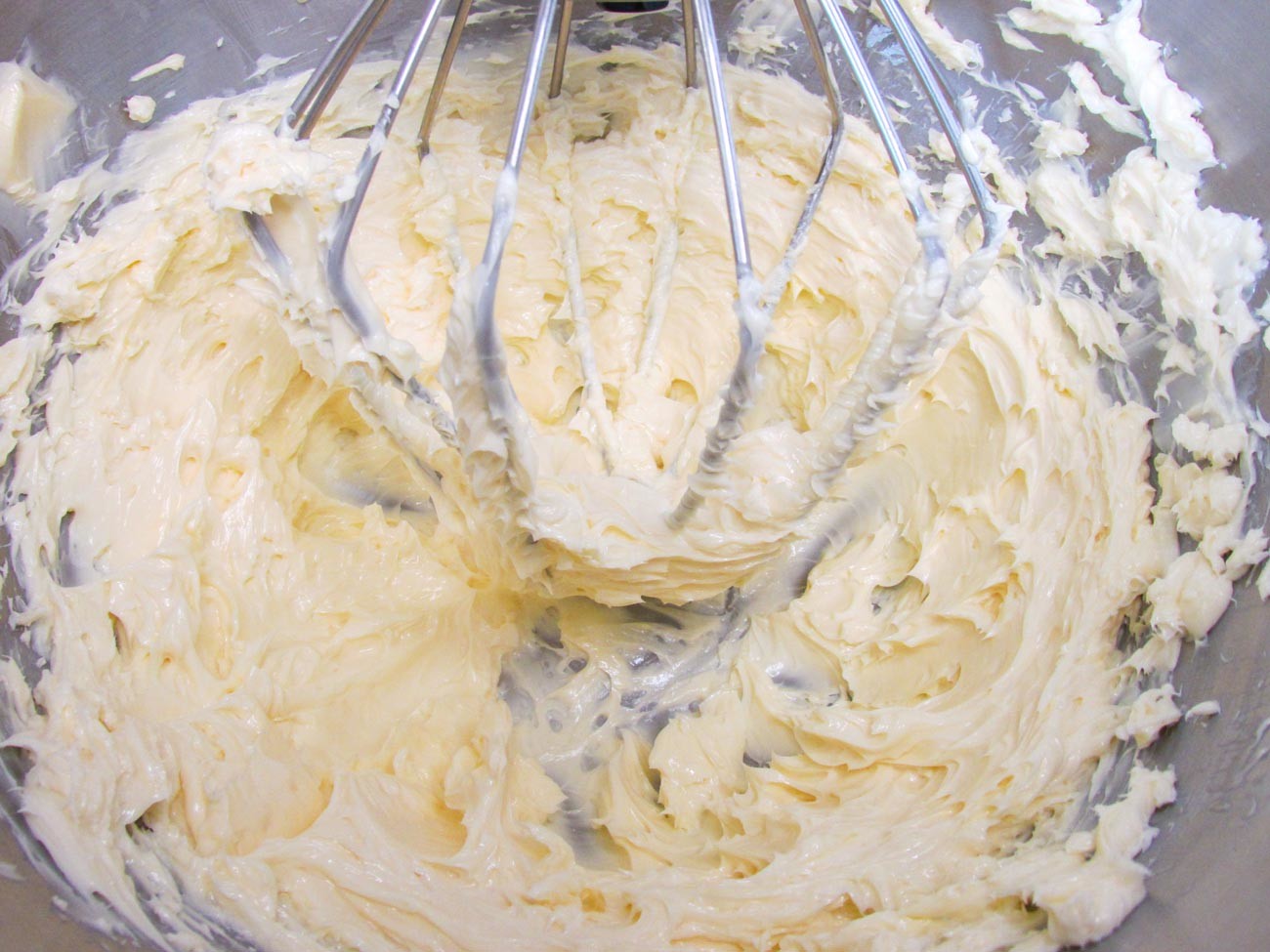 9. Then add, spoon by spoon, the boiled mass to the mixed butter. Continue to whip the mass to full uniformity. As a result, you’ll get a rich, smooth and thick mass.

10. Then grate halva with a small grater and add to the cream, carefully mixing. It’s advisable to cool the cream a bit before assembling the cake. 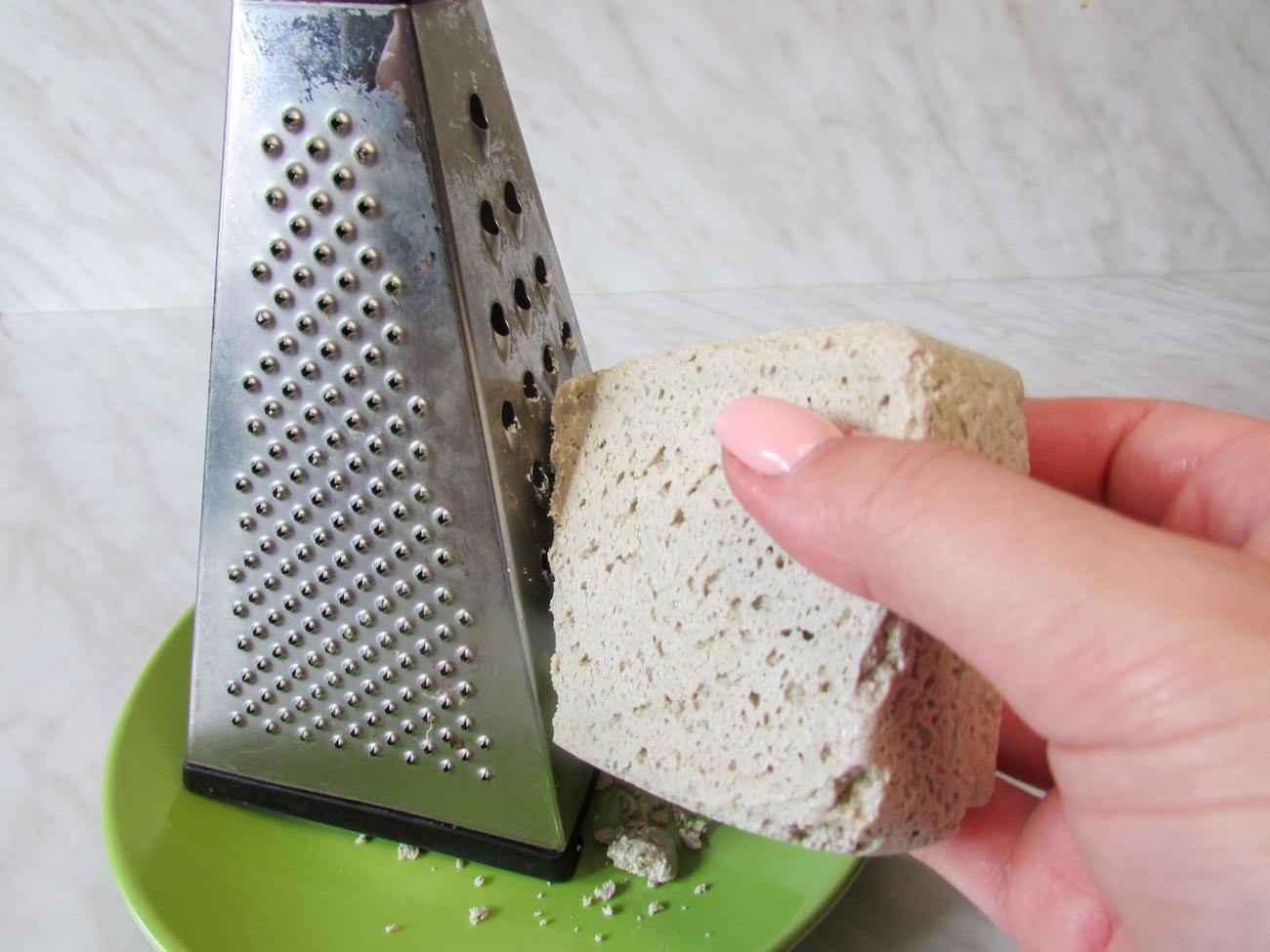 11. Put the first sponge on the plate, soak with sugar syrup or juice and add 1\3 of the cream. 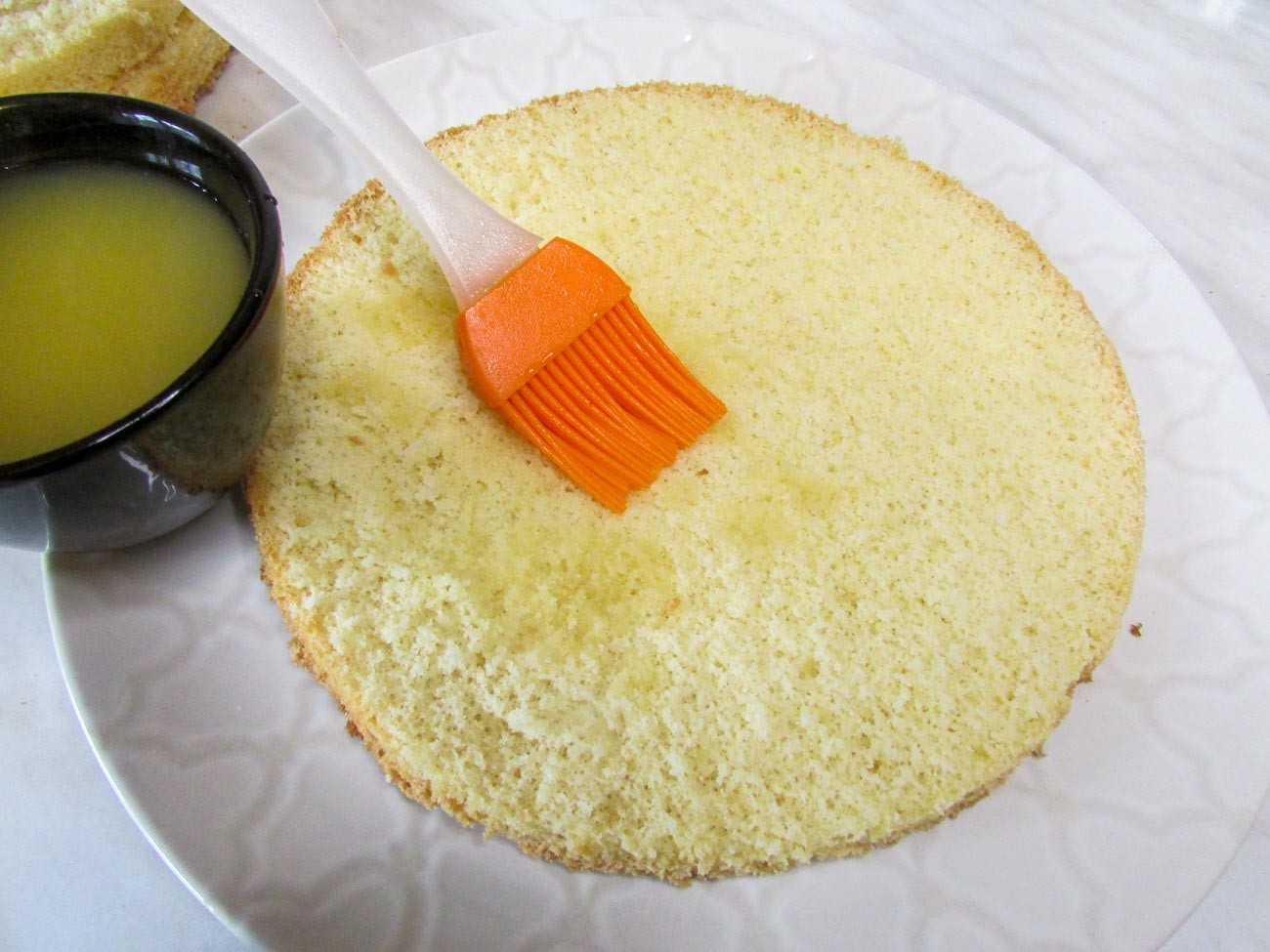 12. Then put the second one and repeat the procedure. 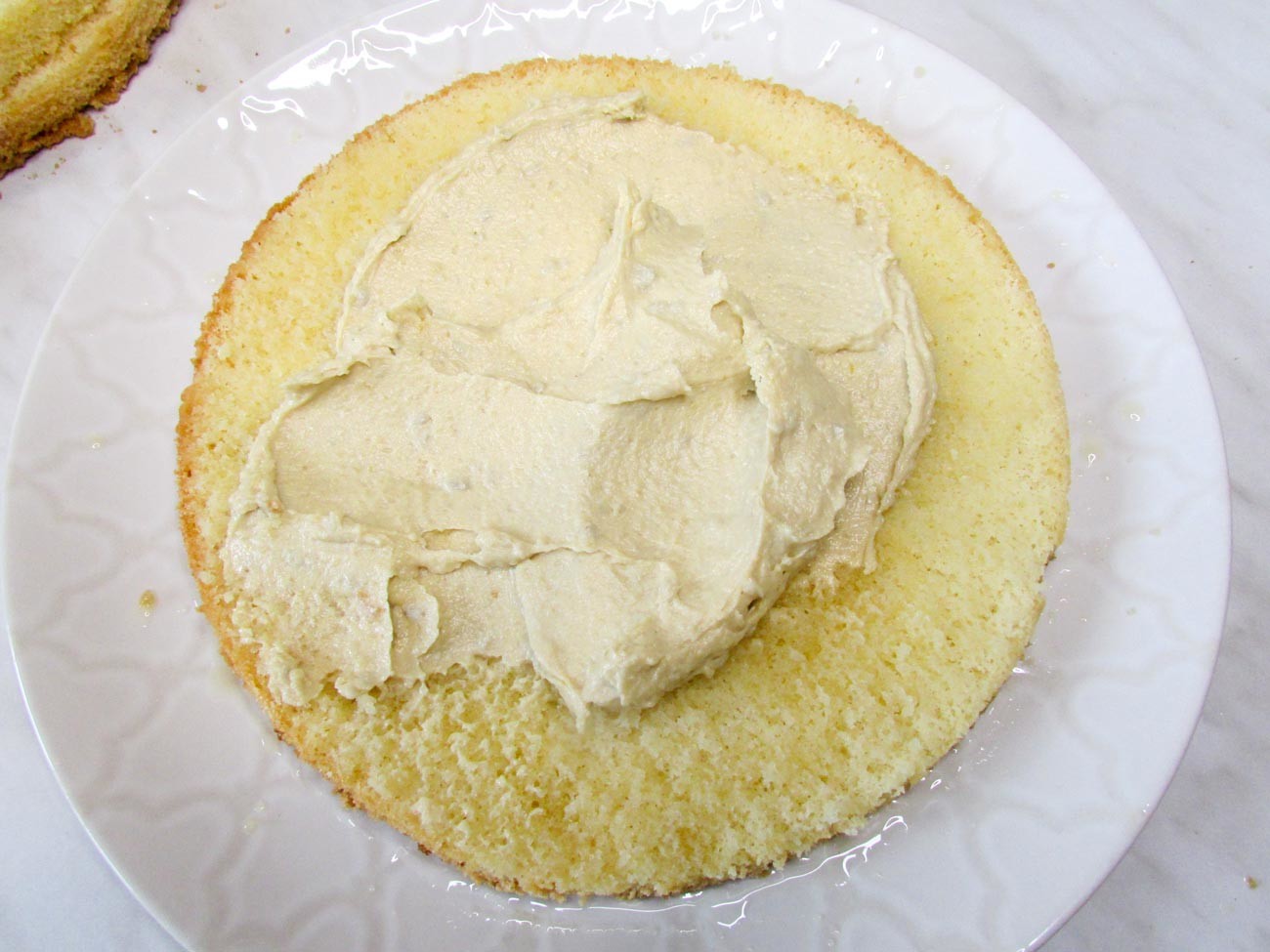 13. Next, place the third and grease the top and sides with the cream. 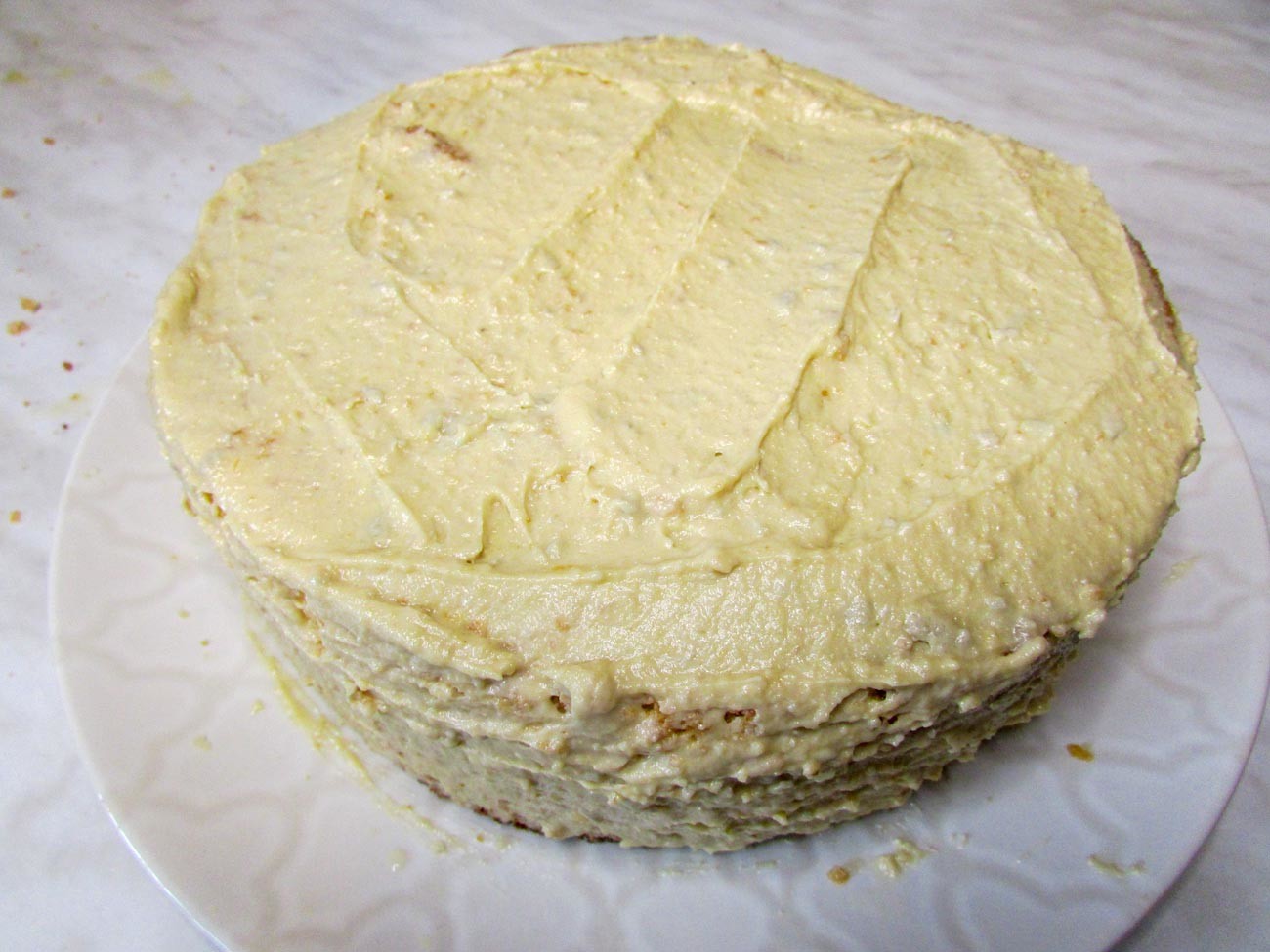 14. Finally, decorate it to your taste. I used the remaining cream and halva. 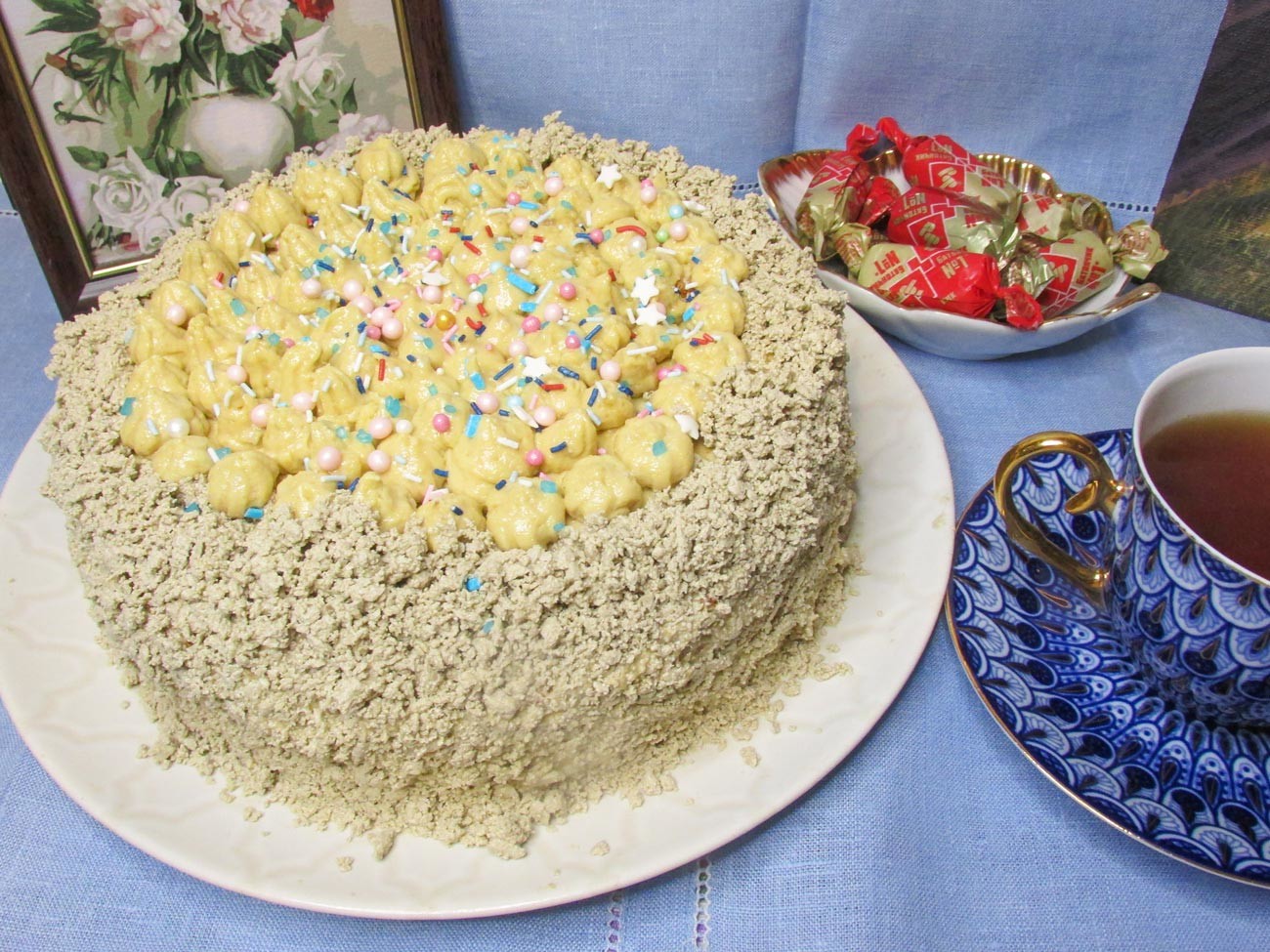