How did pizza first appear in the Soviet Union? 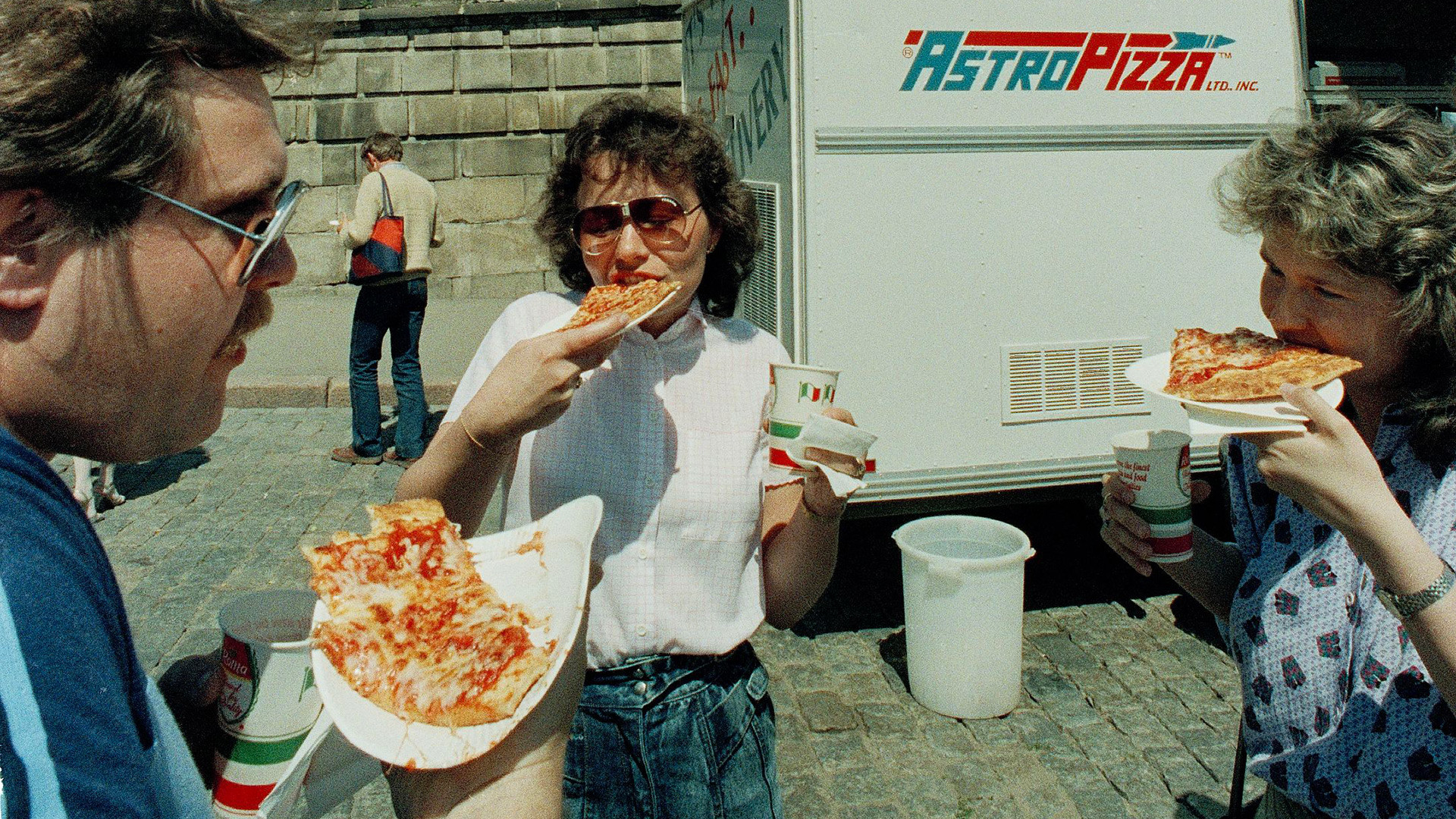 Soviets eat American-style pizza from the truck in Red Square in Moscow, May 28, 1988.

AP
As with so many other things, Russia followed its own path with pizza too. The country's first pizzerias did not offer traditional pizzas like Margarita or Pepperoni, but instead invented their own recipes. You will probably be surprised (and maybe frightened) to hear the list of flavors, but people who tried Soviet pizza do seem to remember it fondly.

The first pizzerias in Russia only appeared with the beginning of perestroika in the 1980s, and some of them are still in business today. Furthermore, although there were no billboards advertising pizza and it was impossible to order delivery, everyone knew what pizza was. What’s more, almost everyone would cook their own variety of the famous Italian dish at home, creating their own Russian versions of it.

The Iron Curtain did not prevent Soviet citizens from learning about pizza and knowing that it was a popular fast food in America. The first restaurants where people could experience the taste of "Western life" began to open in Moscow and other large cities ahead of the 1980 Olympics, in preparation for which the country needed restaurants offering a high level of customer service and modern food. 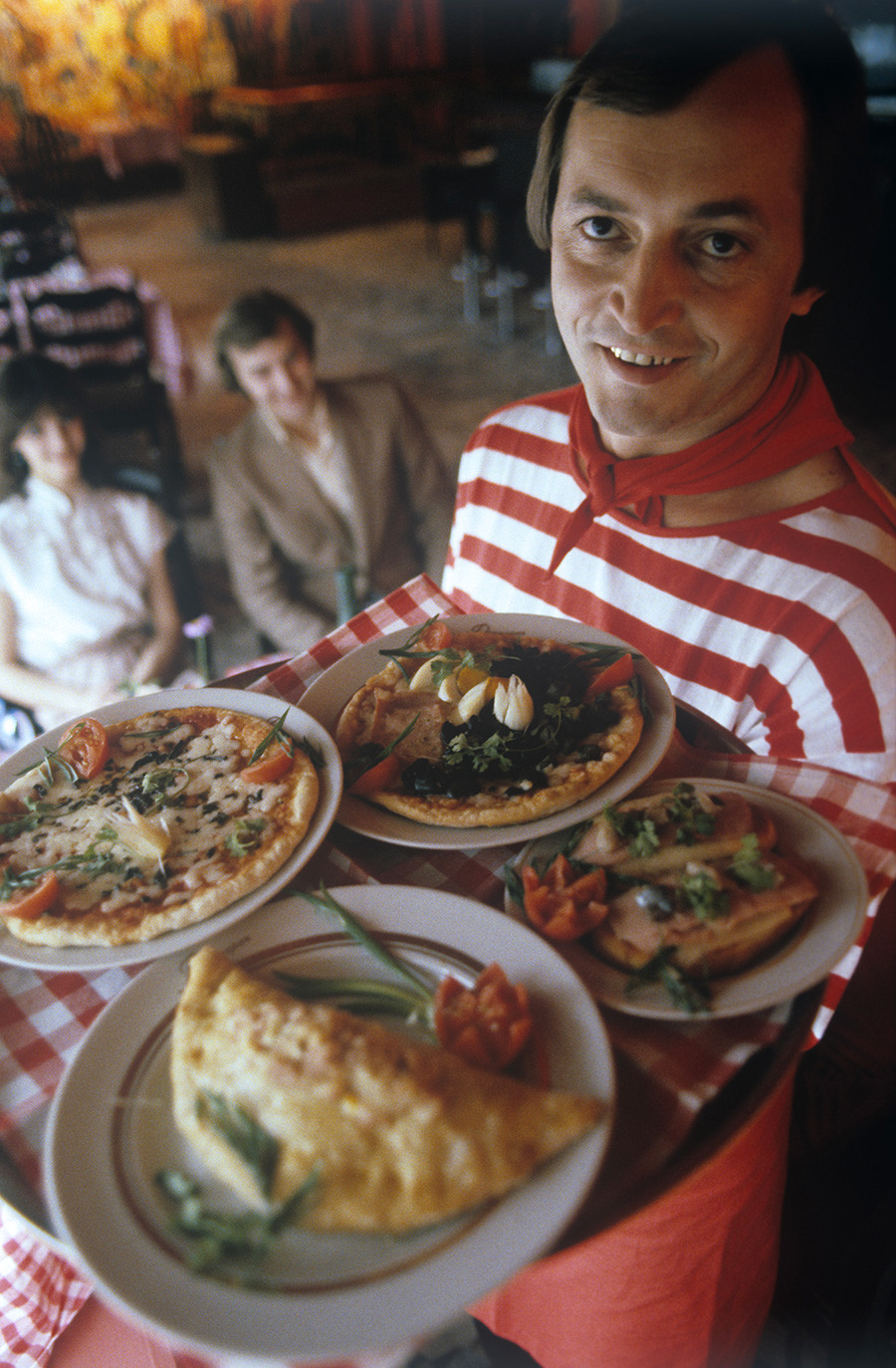 Thus, a pizzeria with red and white checked tablecloths opened on Gorky Street (present-day Tverskaya). It served a variety of pizzas and pastas as well as Lambrusco sparkling wine. 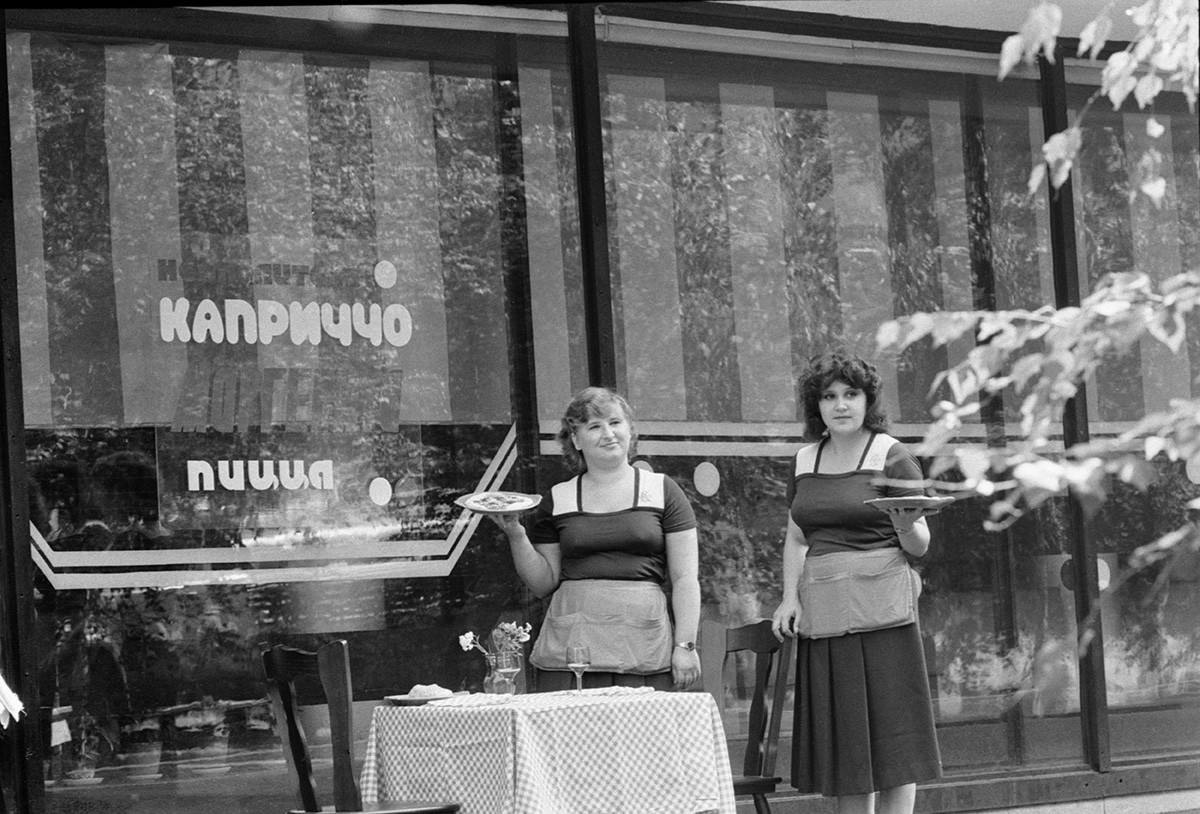 Getting a table there, just as in many other popular places in Moscow, was a stroke of luck. Its pizzas were similar to what we are used to today, albeit small in size.

Another incredibly authentic pizzeria opened in the mid-1980s in Simferopol (Crimea), but it did not serve Margarita, Neapolitana, or other canonical pizza flavors on its menu. 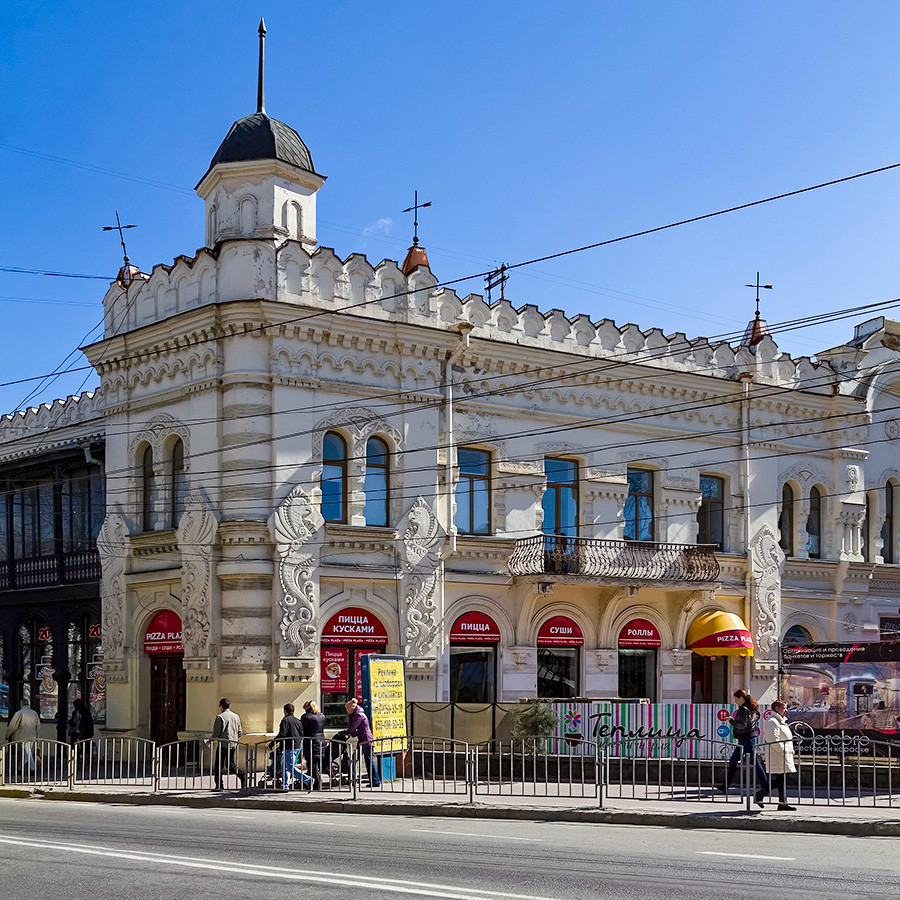 The pizzeria in Simferopol is still in the same building!

Instead, Crimean pizza makers offered Soviet citizens what can only be considered bold culinary experiments. For example, a ham and egg pizza, a chicken and mushroom pizza or a pizza with crab sticks. Their pizzas looked like an open pie on thick dough. This cafe still operates today with practically the same menu. And it gets amazing reviews: “It's unlikely that when this cafe was first opened, anyone had any real idea as to what a pizza is,” writes Sergey from St. Petersburg, who visited the pizzeria while on vacation. “And yet, their pizzas are damn tasty. And the main thing is that they are very generous with the fillings.” 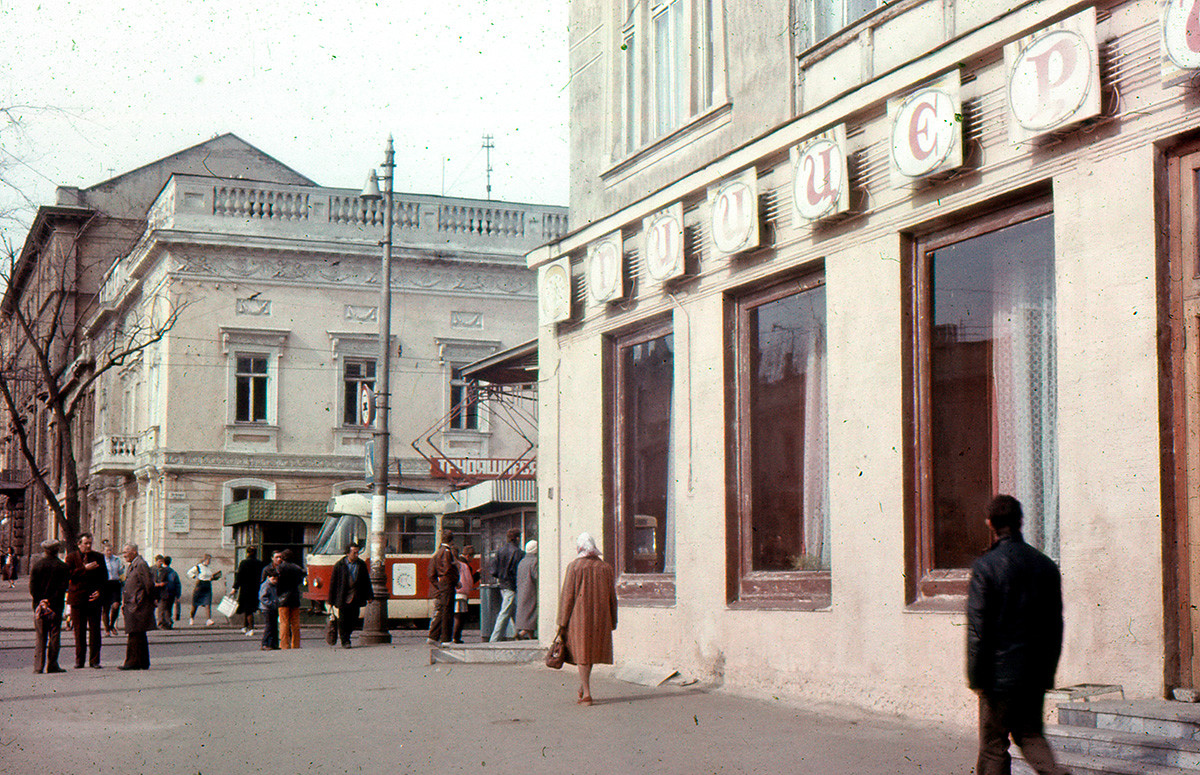 A pizzeria that opened in Odessa in 1984 occupied the premises of a former pancake cafe and was decorated in red and black colors. Its pizza pies with squid, beef or eggs cost no more than 50 kopecks at the time (around 100 rubles, or $1.50, in today's prices).

Many cities across the Soviet Union, such as Kiev, Riga and Lvov, had pizzerias that served their own variations on the traditional Italian dish. 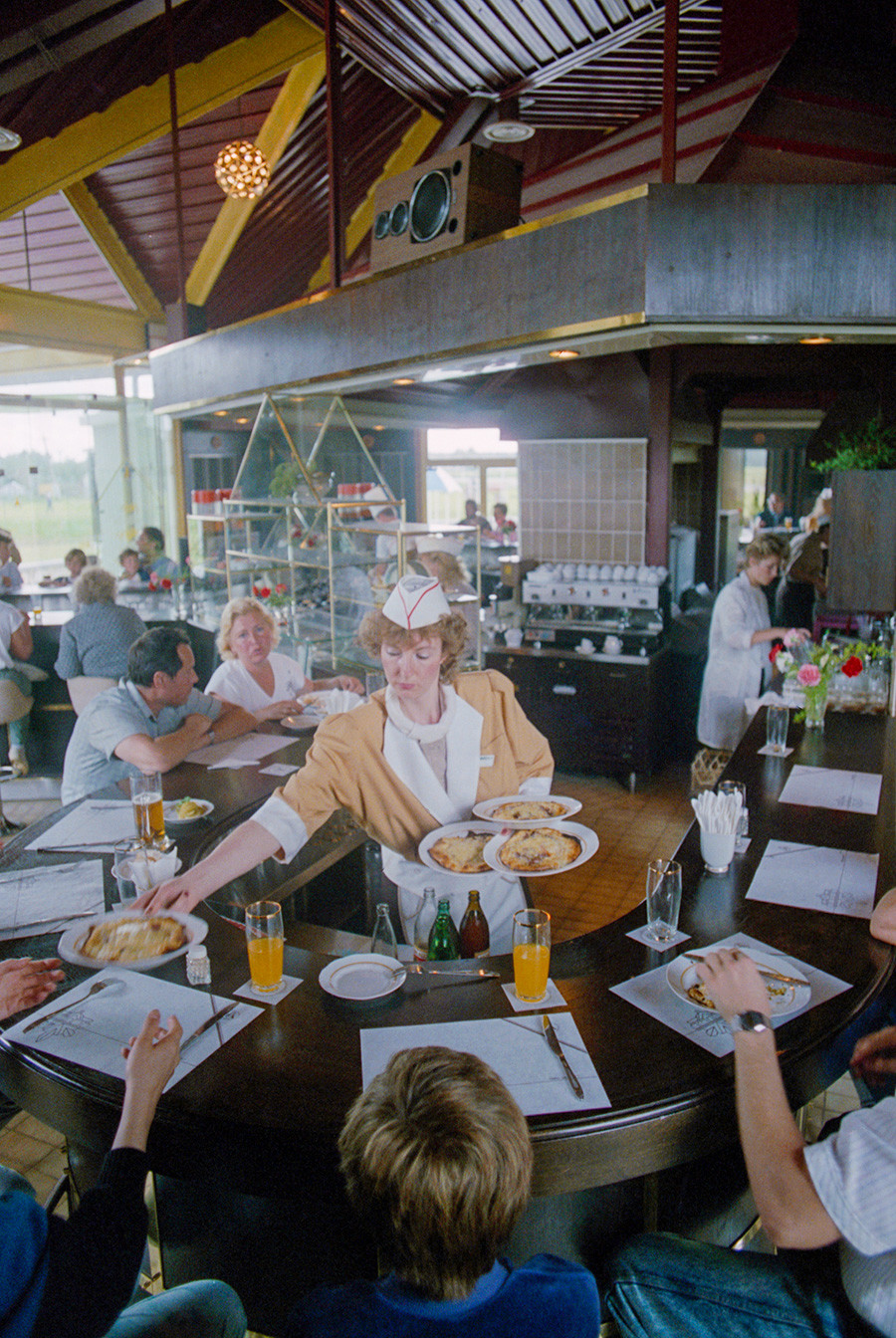 But real Italian and American pizza appeared in the USSR only in the late 1980s, after a summit between Soviet leader Mikhail Gorbachev and U.S. President Ronald Reagan. In 1987, the USSR allowed the establishment of so-called "joint ventures," and with that foreign fast food as well as other Western things began pouring into the country. 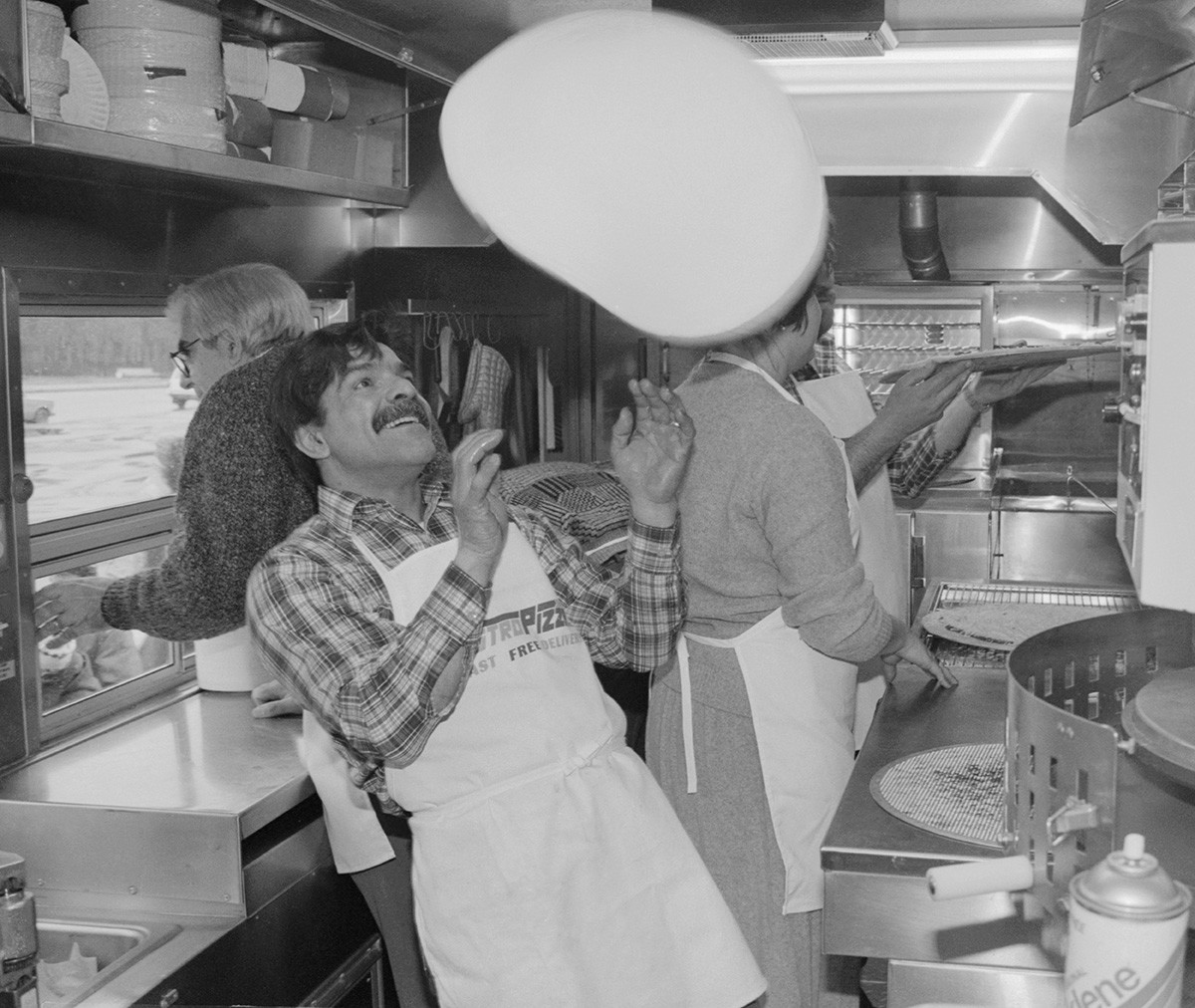 In the spring of 1988, a huge truck with Soviet and American flags appeared in the Lenin Hills neighborhood (today's Sparrow Hills). A crowd of people immediately gathered around it as Italian-American chefs behind the counter demonstrated how they tossed the dough—a trick that previously people had only seen before in movies. Having thrown sausage and cheese on it, they then invited onlookers to try American-style pizza. The food truck was called Astro Pizza and was a Russian-American joint venture. 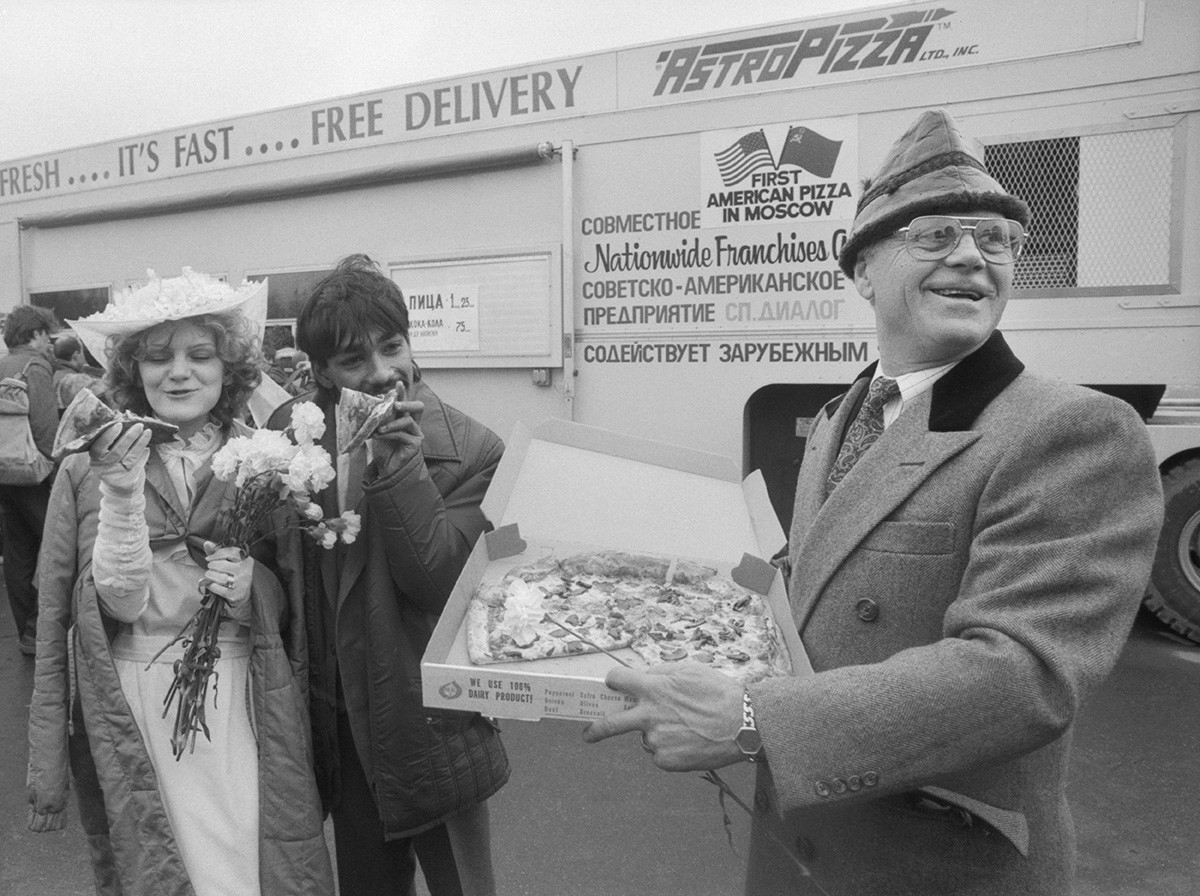 Their prices were not cheap: 1 ruble and 25 kopecks for a slice (not even a whole pizza!), which translates into nearly 300 rubles ($4) in today's money. That did not, however, deter customers, and there were always huge lines of people waiting at the Astro Pizza truck. Its popularity was further boosted by an element of surprise because Muscovites never knew where the truck would appear next. Astro Pizza usually sold around 150-200 pizzas a day, which was a pretty lucrative business overall. 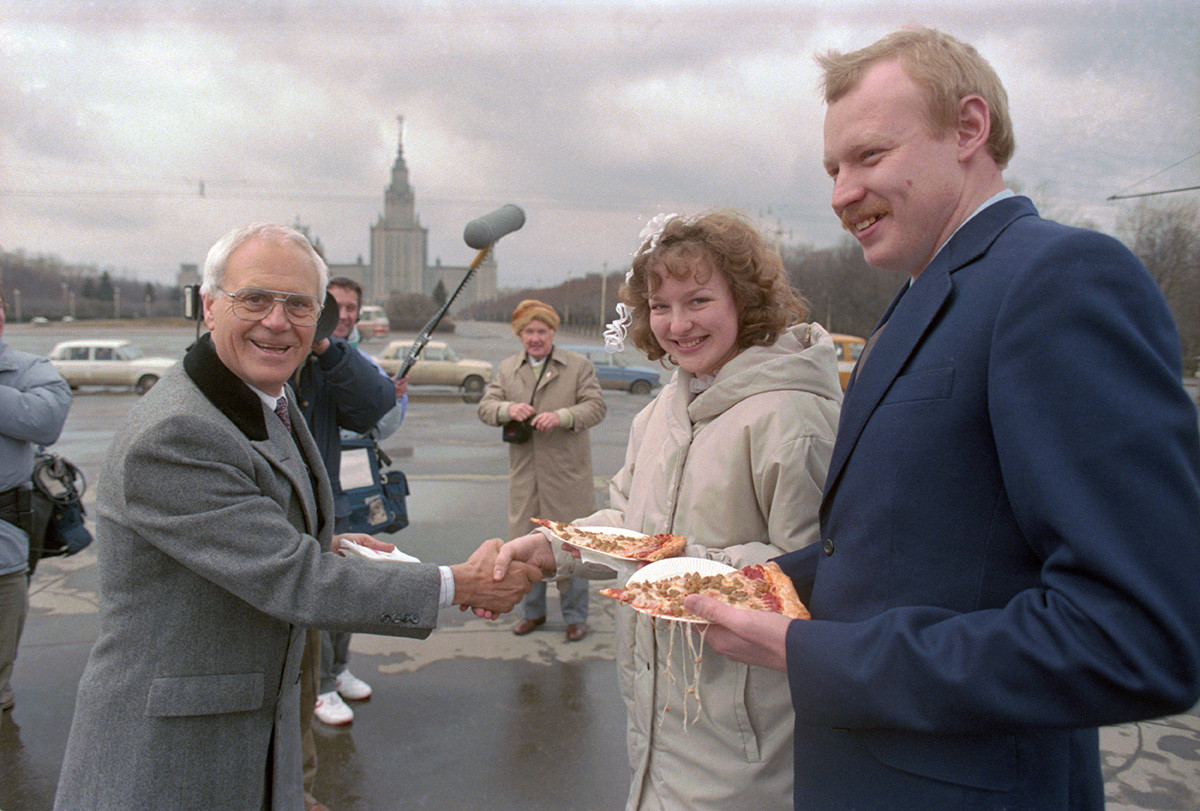 And yet, after just six months, the company left the USSR because the legal status of a joint venture turned out to be problematic for American businesses. There was also a problem with converting Soviet rubles into dollars. It wouldn’t be long, however, before the Soviet Union saw the arrival of some of the real giants of the restaurant business. 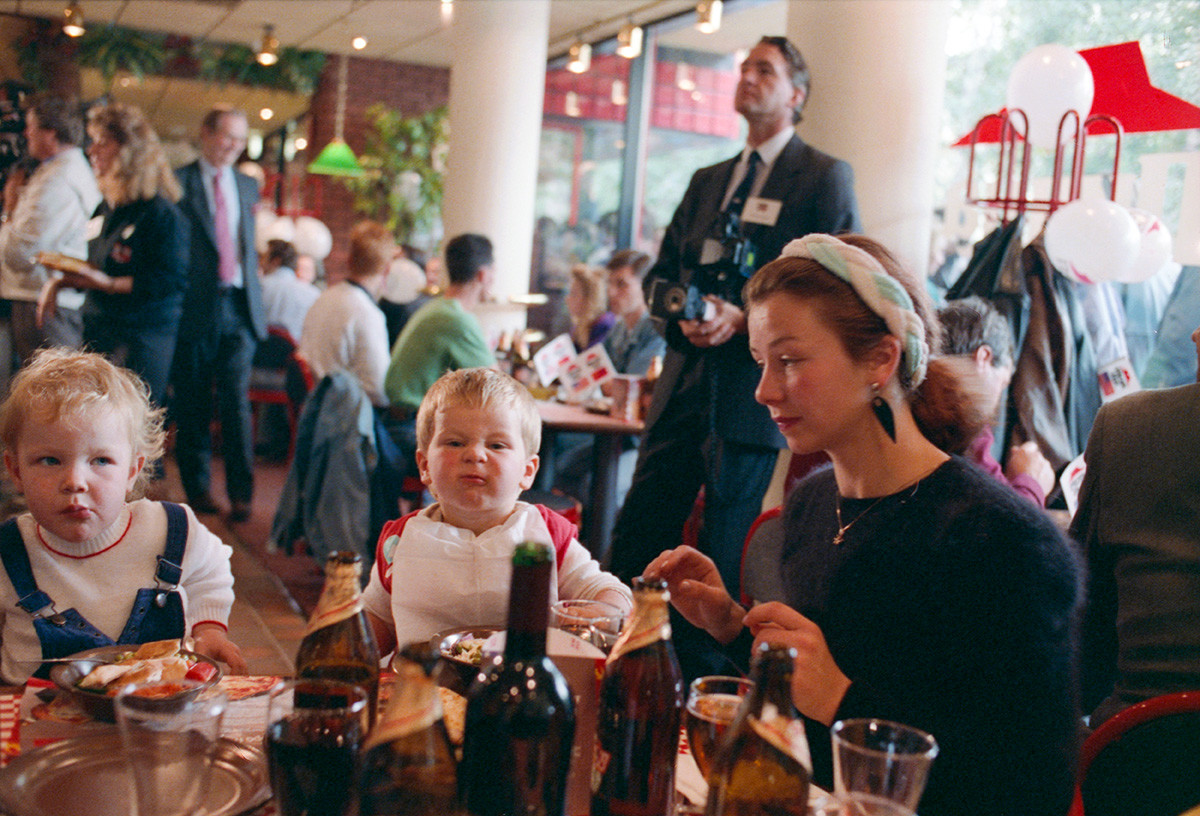 The Pizza Hut restaurant in Moscow, 1990.

In 1990, two Pizza Hut restaurants opened in Moscow at once: one in the center and one in the west of the city (also a joint venture). Just a couple of months later, they were serving about 80,000 customers a month and producing 5,000 pizzas a day! Moscow's Pizza Hut restaurants were the largest in the world at the time and offered all modern varieties of pizza.

Initially, the company's management planned to use mostly Soviet ingredients, but it turned out that there were simply no suppliers of mozzarella in the country, plus in winter it was almost impossible to find fresh vegetables in the necessary amounts.

Furthermore, Pizza Hut restaurants were also quite expensive for locals, and were not seen as just a place to grab a quick bite.

They accepted not only rubles, but also U.S. dollars, which not many people in the USSR had (and those who did were mostly foreigners). A large pizza cost about 18 rubles (4,000 rubles in today's money), while its price in dollars was almost twice as high. And yet, foreigners would often choose the sections of the restaurants that charged in dollars so as not to wait in line. 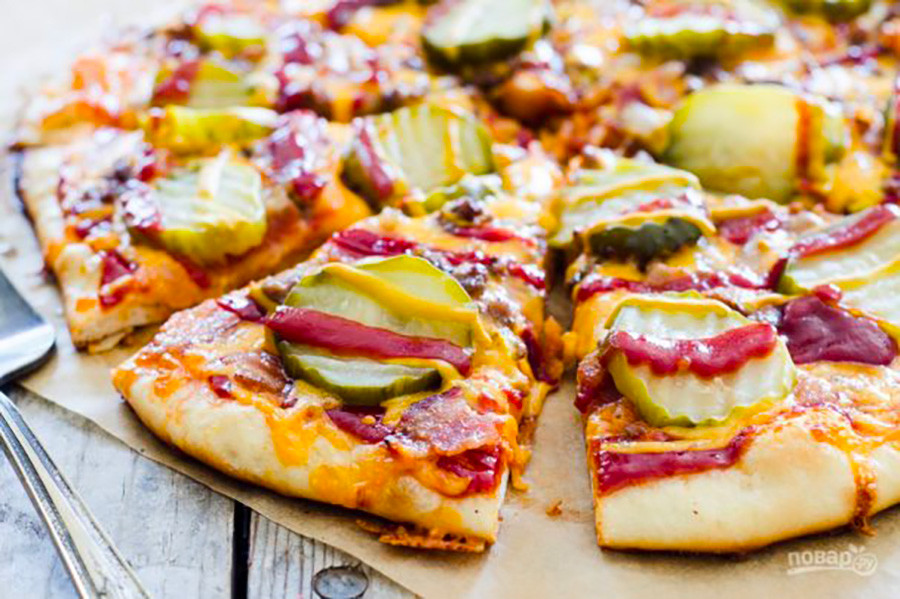 Many Soviet people could not afford to eat out often, but this did not mean that they did not cook pizza at home. Homemade pizzas were made using any and all leftovers in the fridge, while exotic ingredients like anchovies were replaced with something more familiar, like herring.

“In Ryazan, where I lived, when a leatherette factory was built, the equipment was ordered from Italy.” recalls Konstantin Stepanov. “A large group of Italians arrived to set it up and to train local staff. They cooked pizza, and the recipe spread by word of mouth. I remember my grandmother tried to make pizza too."

In the late 1980s, the Leningrad Institute of Soviet Trade developed pizza recipes that could be found in cookbooks in that period. The base was ordinary yeast dough, which was covered with tomato paste and, optionally, mayonnaise, an ingredient much loved by Soviet people at the time. Then there were also options for making either a fish or a meat pizza. For the fish pizza, you would need 75 grams of fish (any variety), 10 grams of onions, some olives (which could also be replaced with pickles) and 30 grams of cheese. And you could top it all with dried herbs. Meanwhile, the meat pizza required boiled minced meat or chicken, a boiled egg, cheese, tomato and herbs. The cooking time was eight minutes at 300 degrees.