How pozy became a gastronomic heritage in Buryatia (RECIPE) 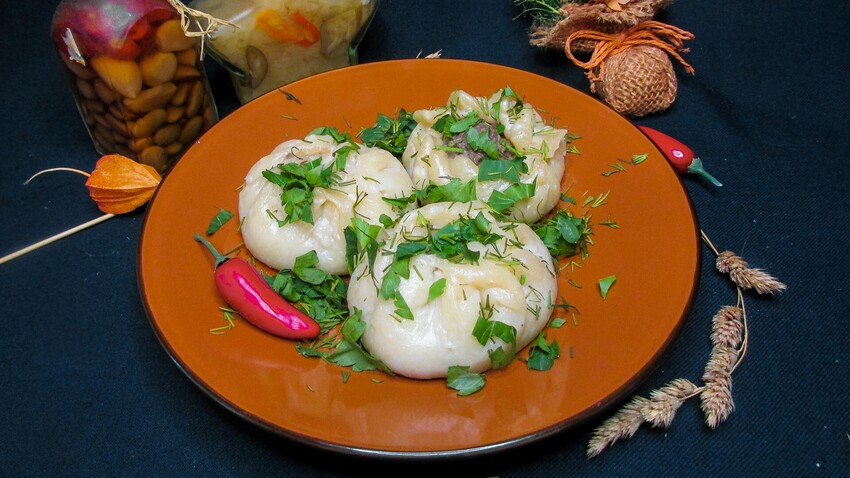 Olga Brovkina
Pozy - a traditional dish cooked in the Republic of Buryatia, requires exactly 33 pinches to make. There’s a special reason for that.

The origins of pozy, or as they’re also known - buzy, or buuz, date back 400 years. The story goes that the head of the Tibetan lamas invited the Buryats to his place in order to introduce them to Buddhism, and treated them to some buzy (meat wrapped in dough).

Balls of chopped meat with lard were wrapped in dough, leaving a small hole around which 33 pinches were made. Why 33? Such was the exact number of folds in the clothes of Tibetan priests.

After this visit to the lamas, the Buryats ordered to prepare buzy (later – pozy) exactly in the same form in which they were prepared by Tibetan monks. The meat of five animals must be used for the mince - camel, sheep, goat, horse, and cow. Lard, wild onion and garlic were also added to the minced meat. This set of ingredients is still preserved for posterity and is being passed down from generation to generation.

Nowadays, pozy embodies the wisdom of the Buryat people. When their distant ancestors were working out the dish, they took the yurt as a basis. In a round-shaped dwelling in the middle, there was a hearth, with smoke coming out of a hole in the roof. Despite its simplicity, the yurt is cunningly arranged: in winter, the temperature inside is warm, and in summer, it is remarkably cool.

Buryat pozy turned out to become an age-old hit. On finding out that this dish will be cooked for a celebration, no one dares to give it a miss. Moreover, it is so adored by the people of the Republic of Buryatia, that there are even poems, festivals, several films and features dedicated toit. What’s more, pozy even have their own national anthem, a monument, and an annual award, established by the association of restaurateurs of Ulan-Ude, the capital of the Republic.

Let’s try cooking this Buryat meat dish, which strongly resembles khinkali or manty in appearance and recipe. It is likewise prepared with unleavened dough, used to wrap the mince. So, let’s start!

Ingredients for 8 portions (or 24 pozy): 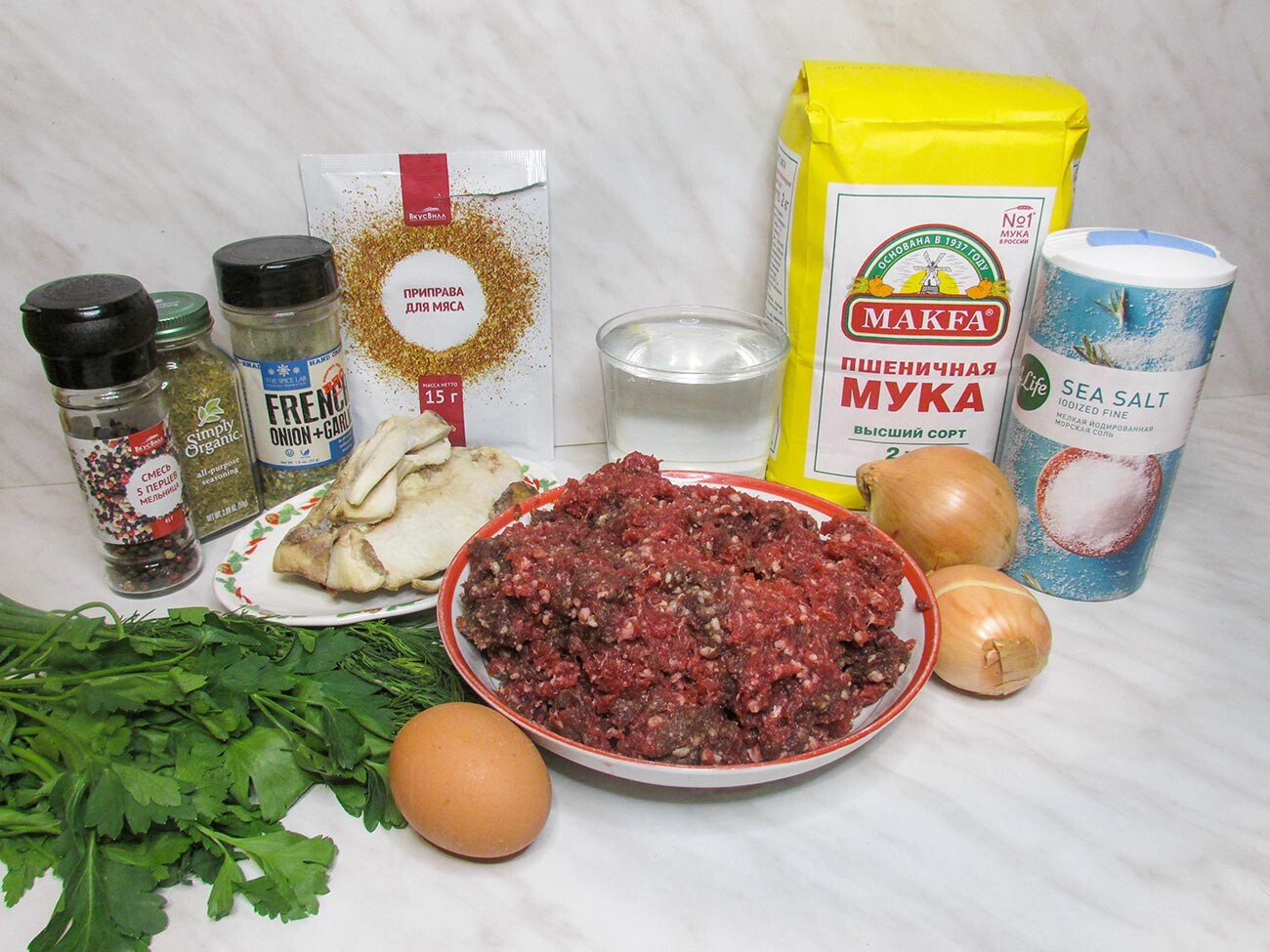 1. To begin, we’ll prepare the dough, because it needs to rest 30 minutes before we start working with it. Sieve all the flour into a bowl. 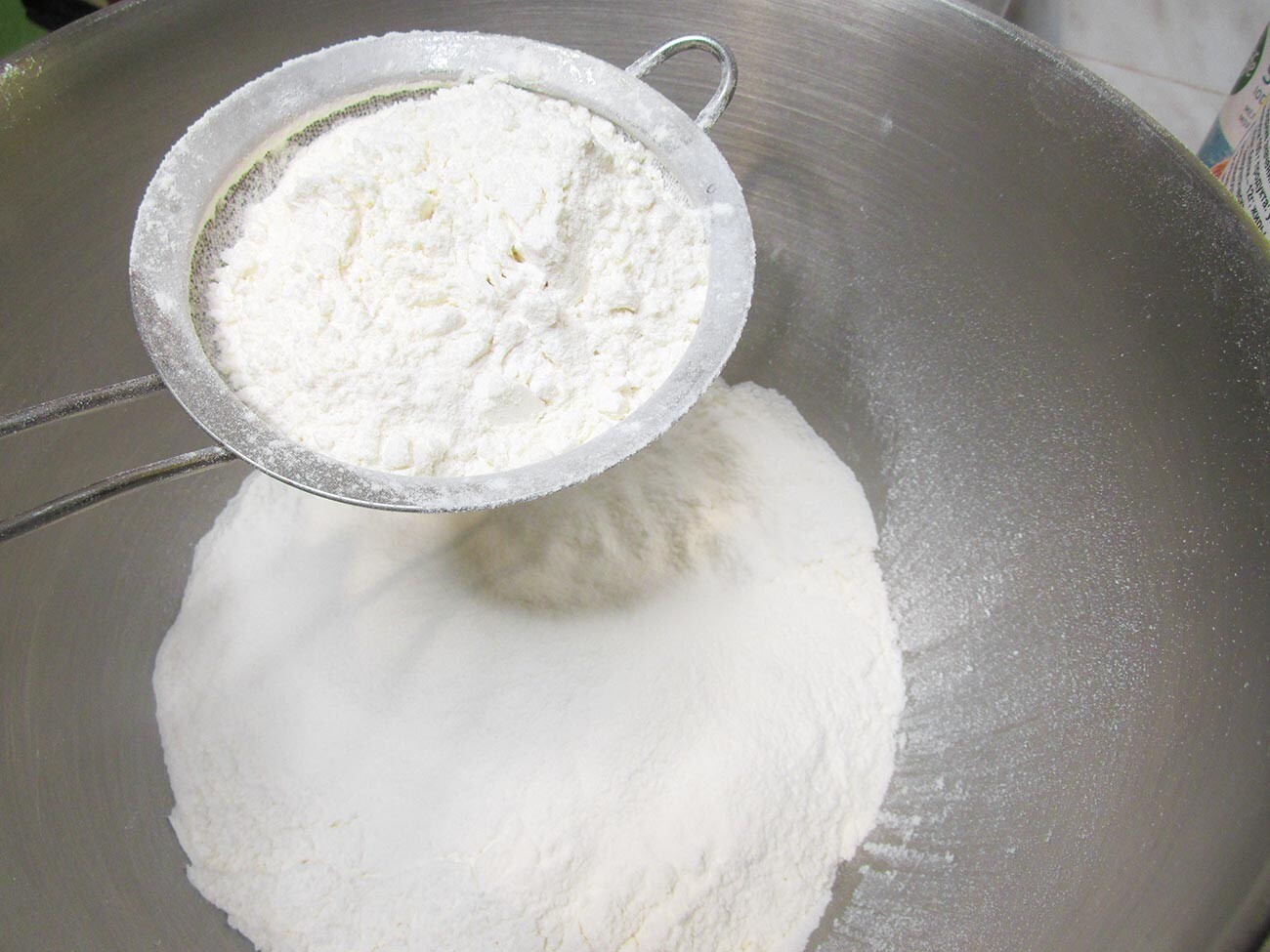 2. Then it’s necessary to make a small pit and pour some water in, before adding an egg and a pinch of salt. Mix the dough carefully and meticulously with your hands until the dough turns into an elastic ball - but don’t make it too tight. Wrap it in cellophane packaging for 30 minutes. 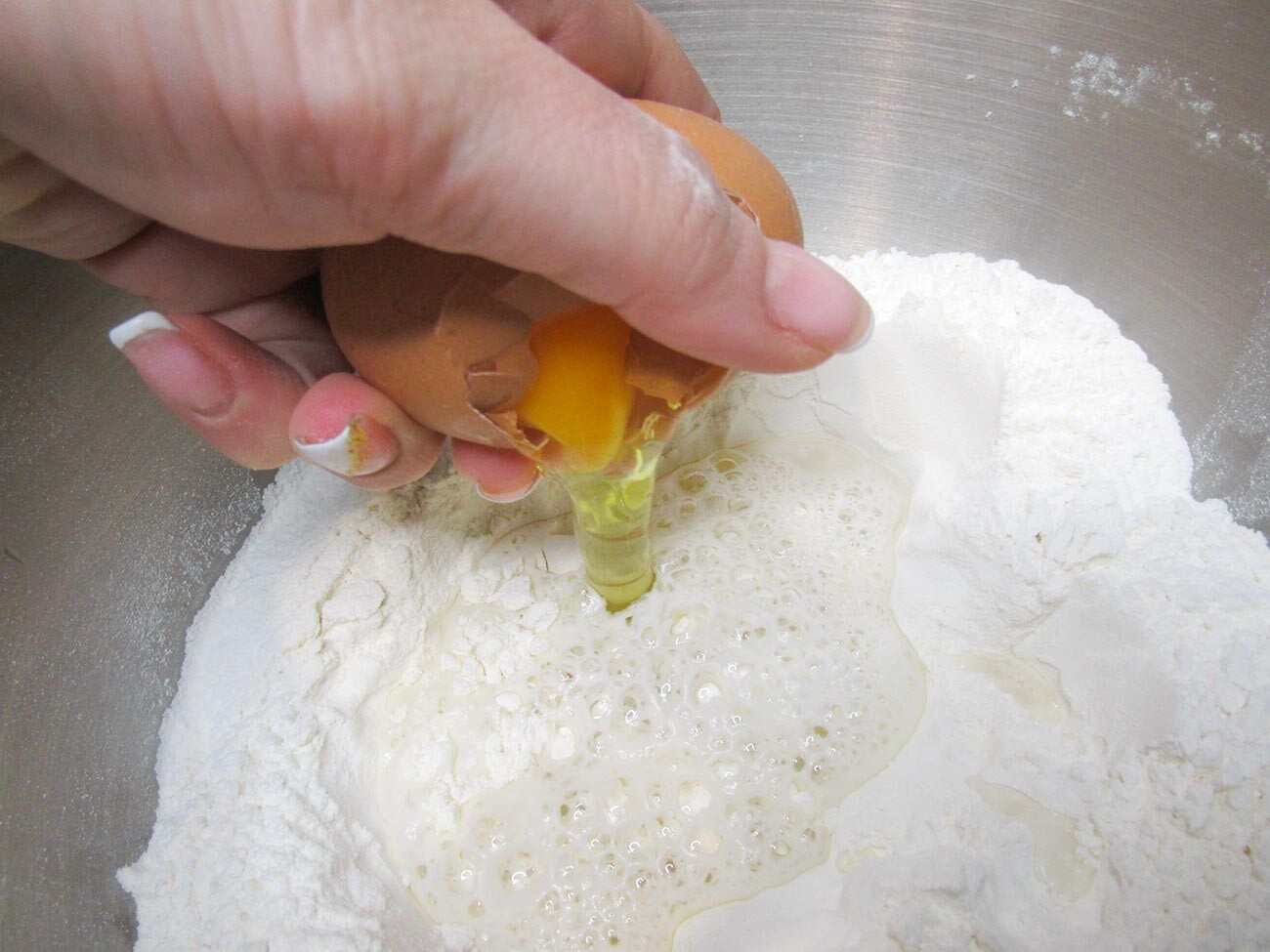 3. While the dough is resting, we’ll prepare the filling. Cut the onions into small cubes and throw them into a bowl with the minced meat. (They say, the meat must always be diced with a knife, and not minced in a meat grinder. But I don’t have such extremely sharp knives at home, so I used minced meat.) Season the ingredients with spices and salt. 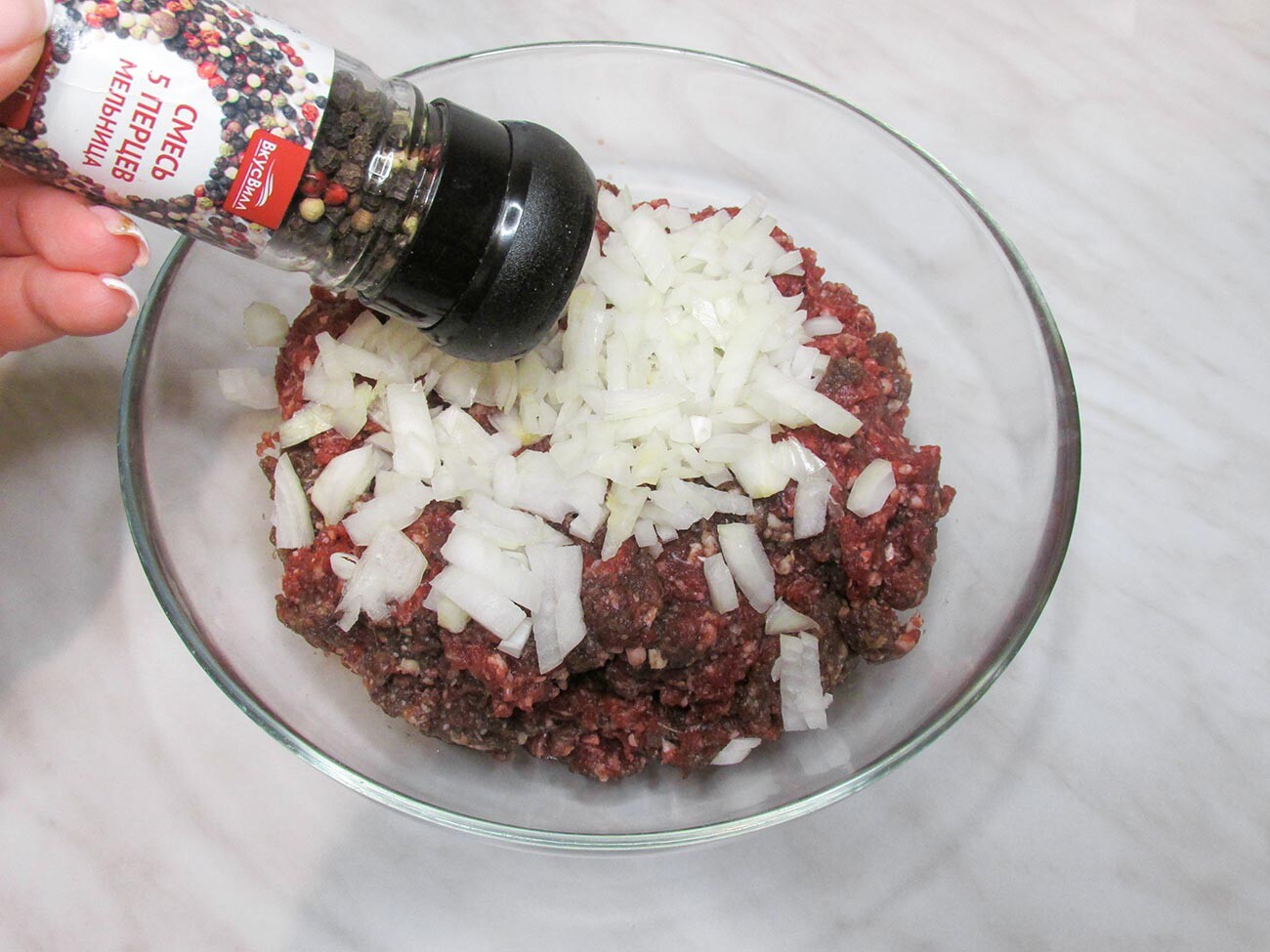 4. Let’s not forget about the lard. It must be completely frozen, before we use a fine grater to grate it. Attach a little water or broth – for juiciness. 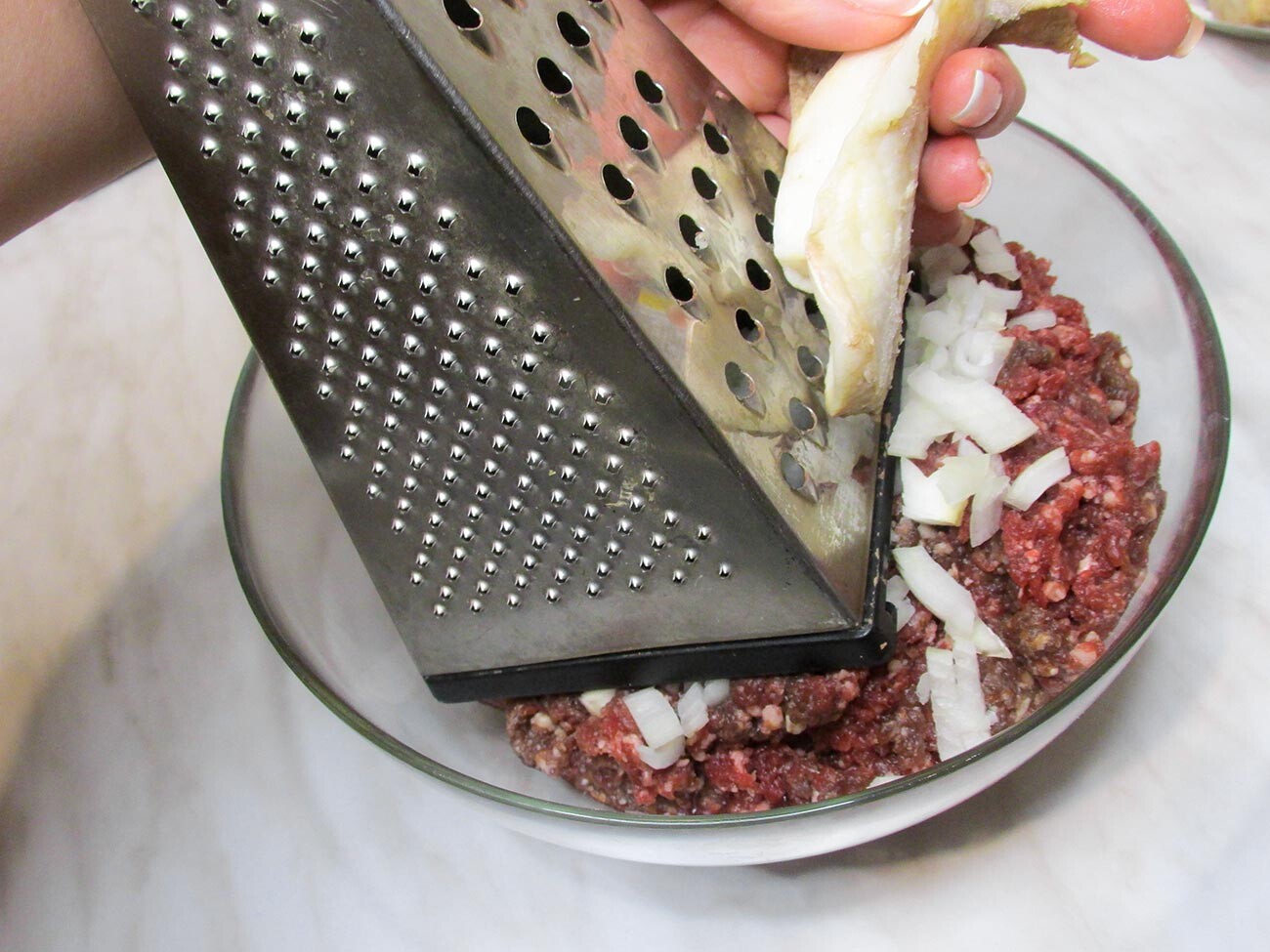 5. After that, the stuffing should be carefully mixed with a spoon into a homogeneous meat mass. The filling for the pozy is ready.

6. Now it’s time to shape the pozy. First, divide the dough into many small balls. An additional portion of flour can be used, if needed. 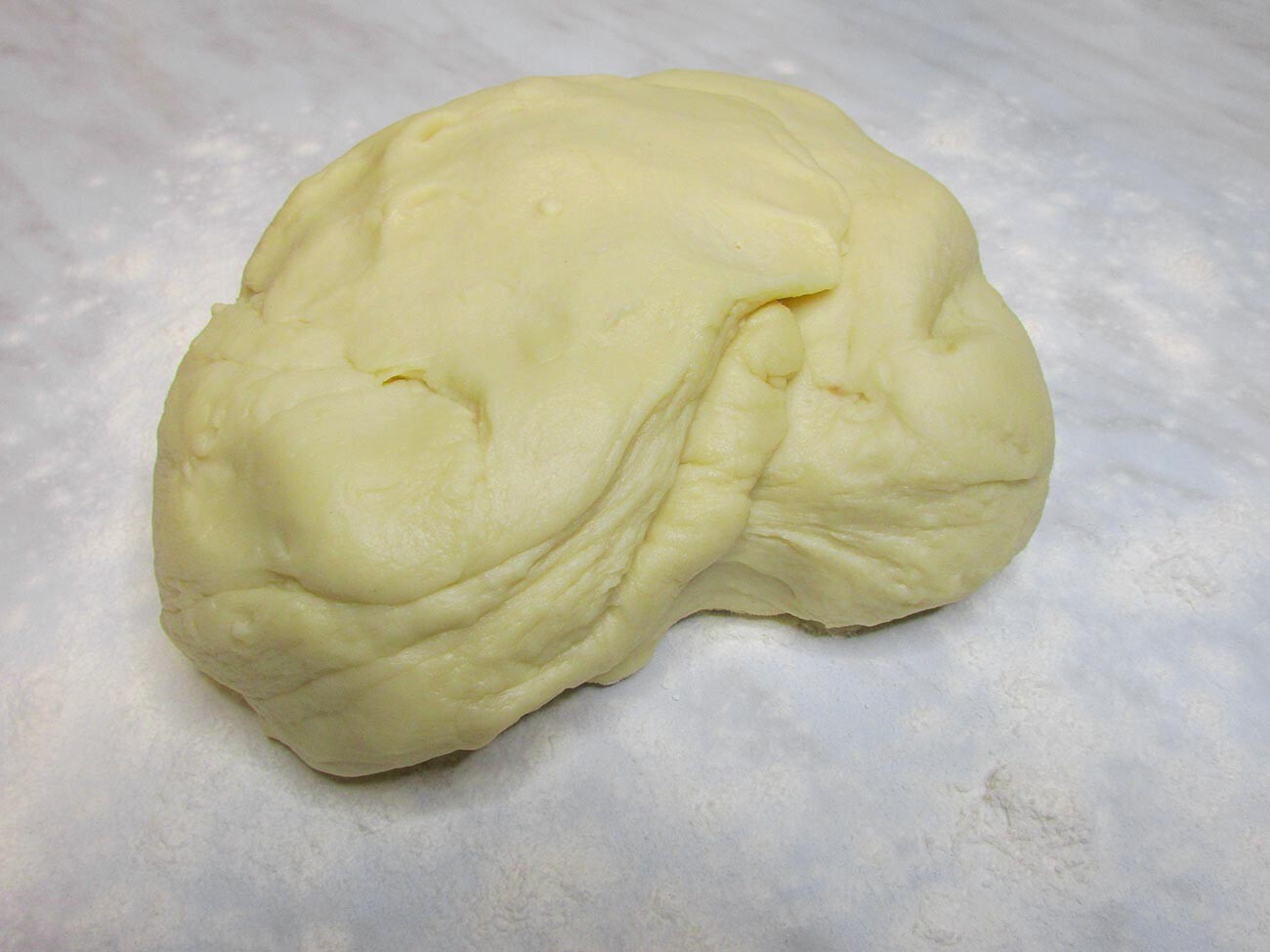 7. Each ball should be rolled into a flat cake, but the middle must be slightly denser, and the edges – thinner. The approximate size of the finished pozy is 5-8 cm. 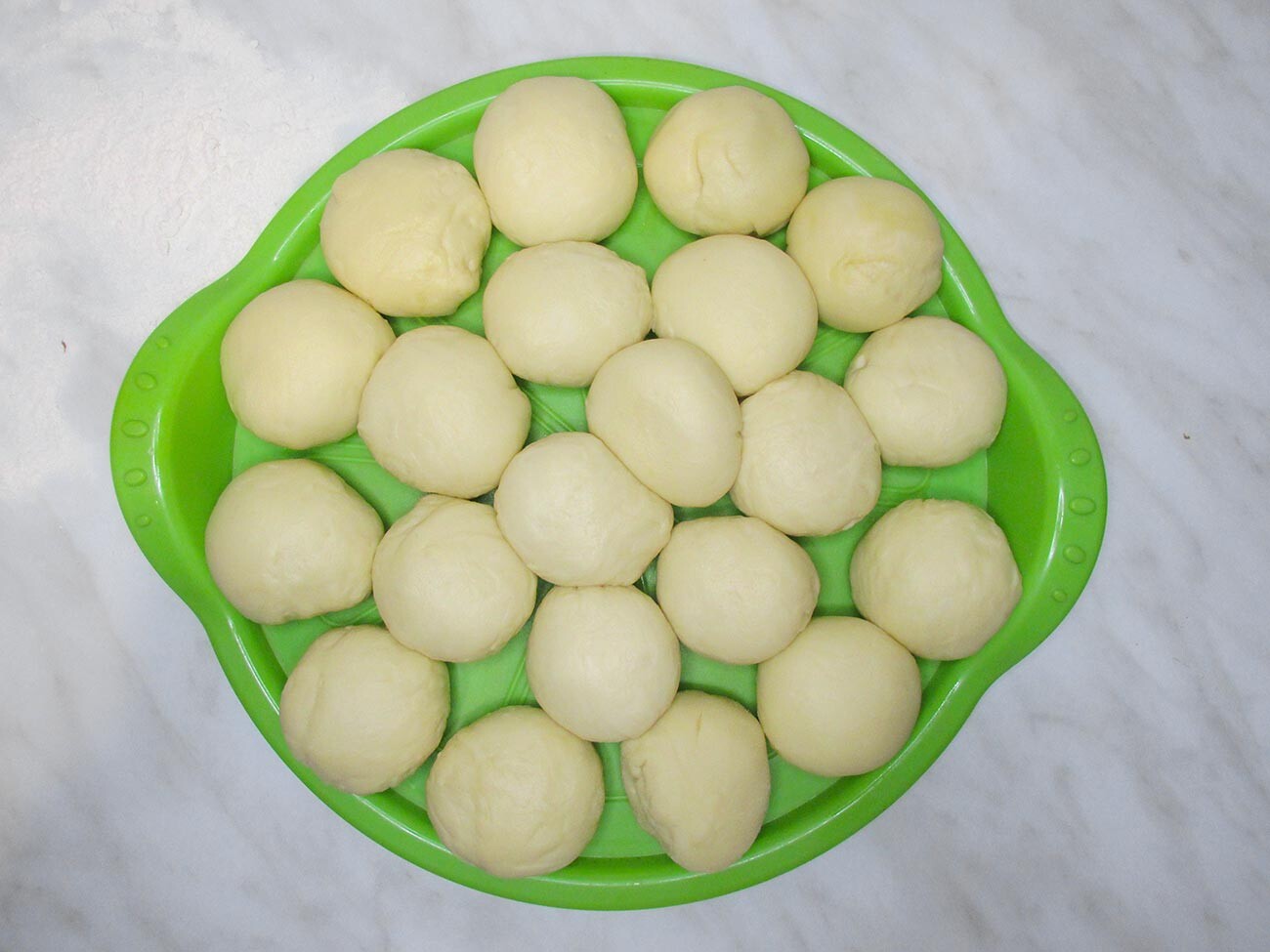 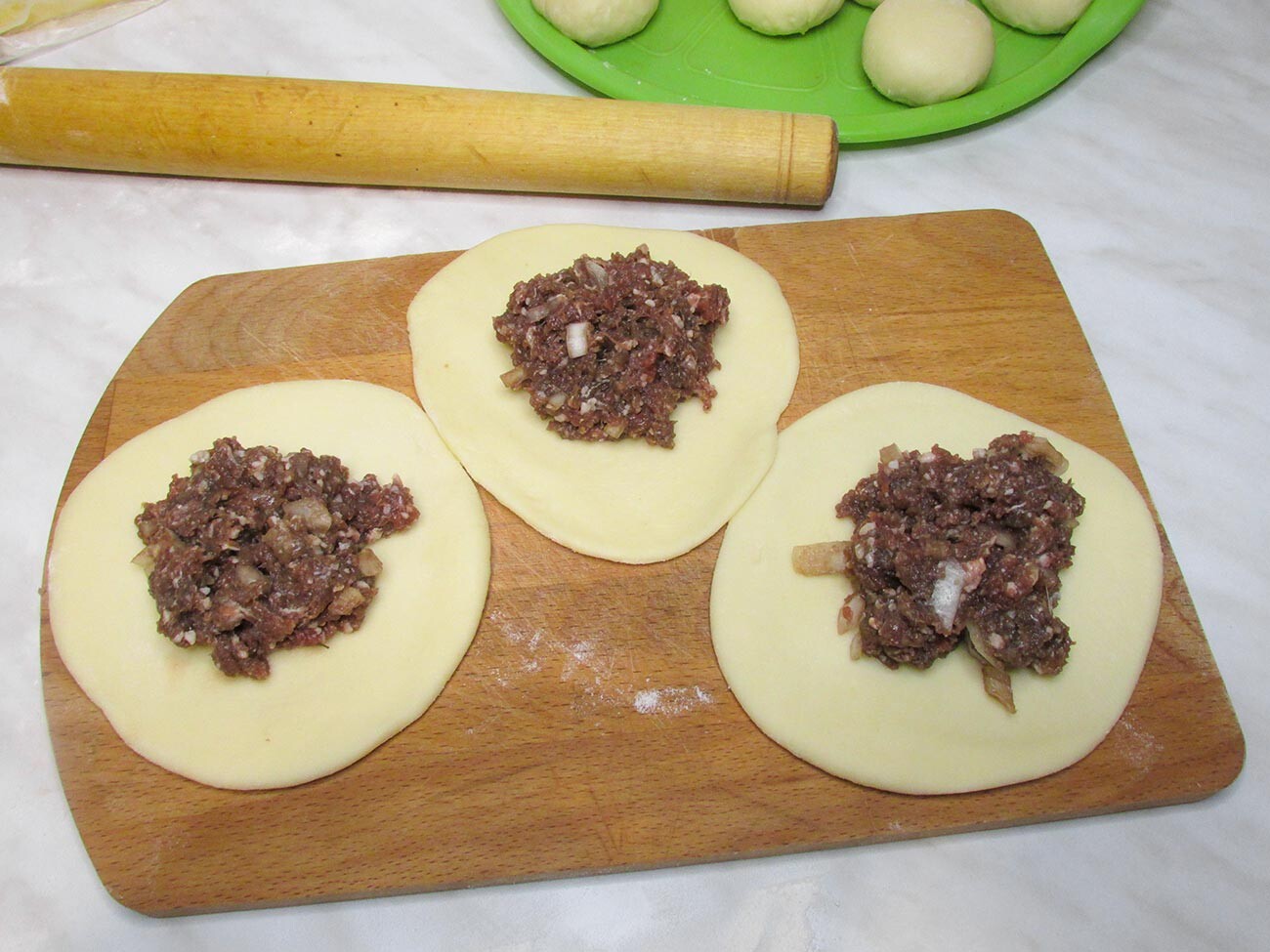 9. With your thumb and index finger, the dough is molded with overlapping pinches, leaving a small hole in the middle, through which steam will come out. Shape the pozy this way one after the other. 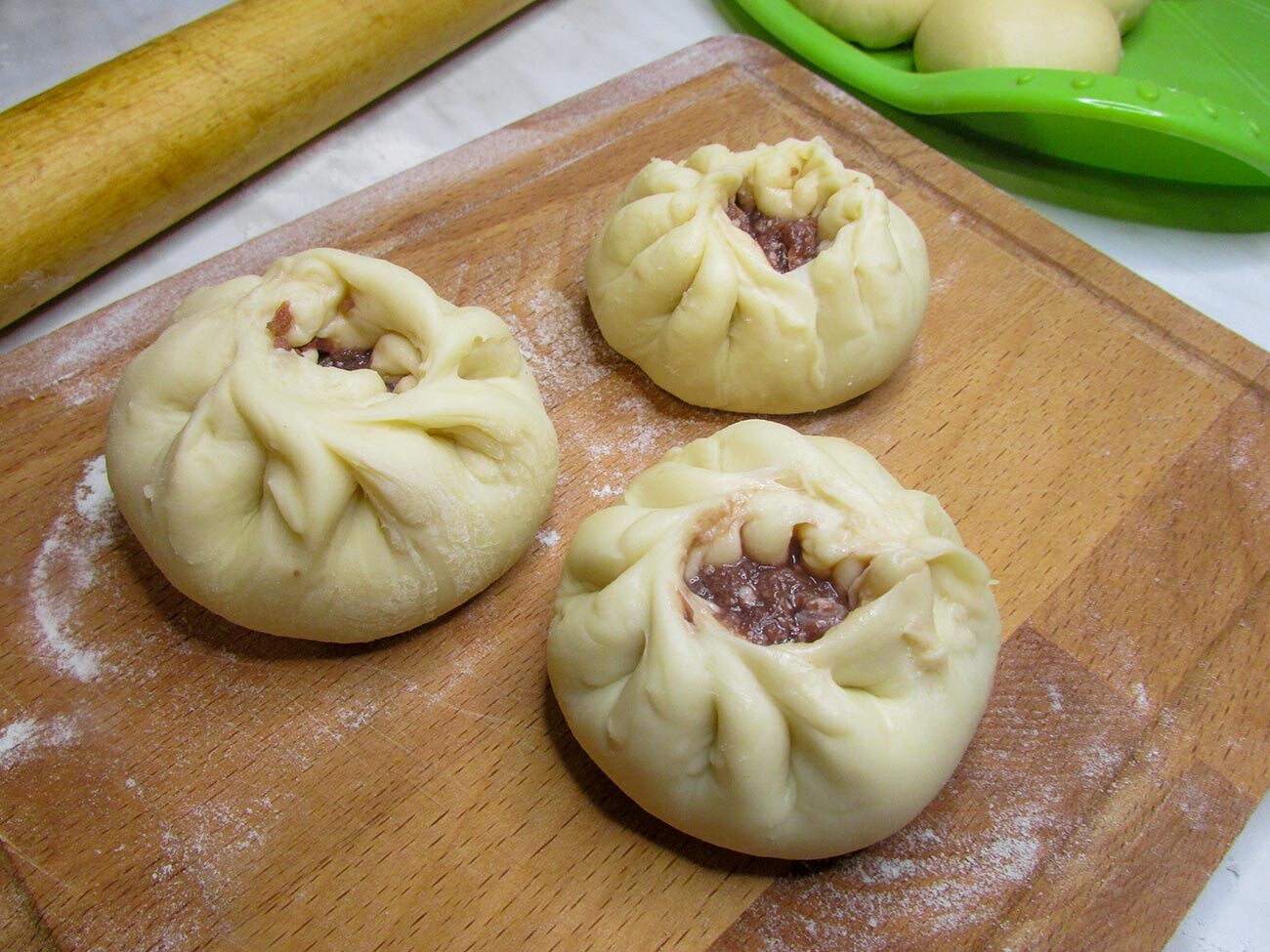 10. For cooking pozy, I used a regular steam cooker, it takes about 15 minutes. 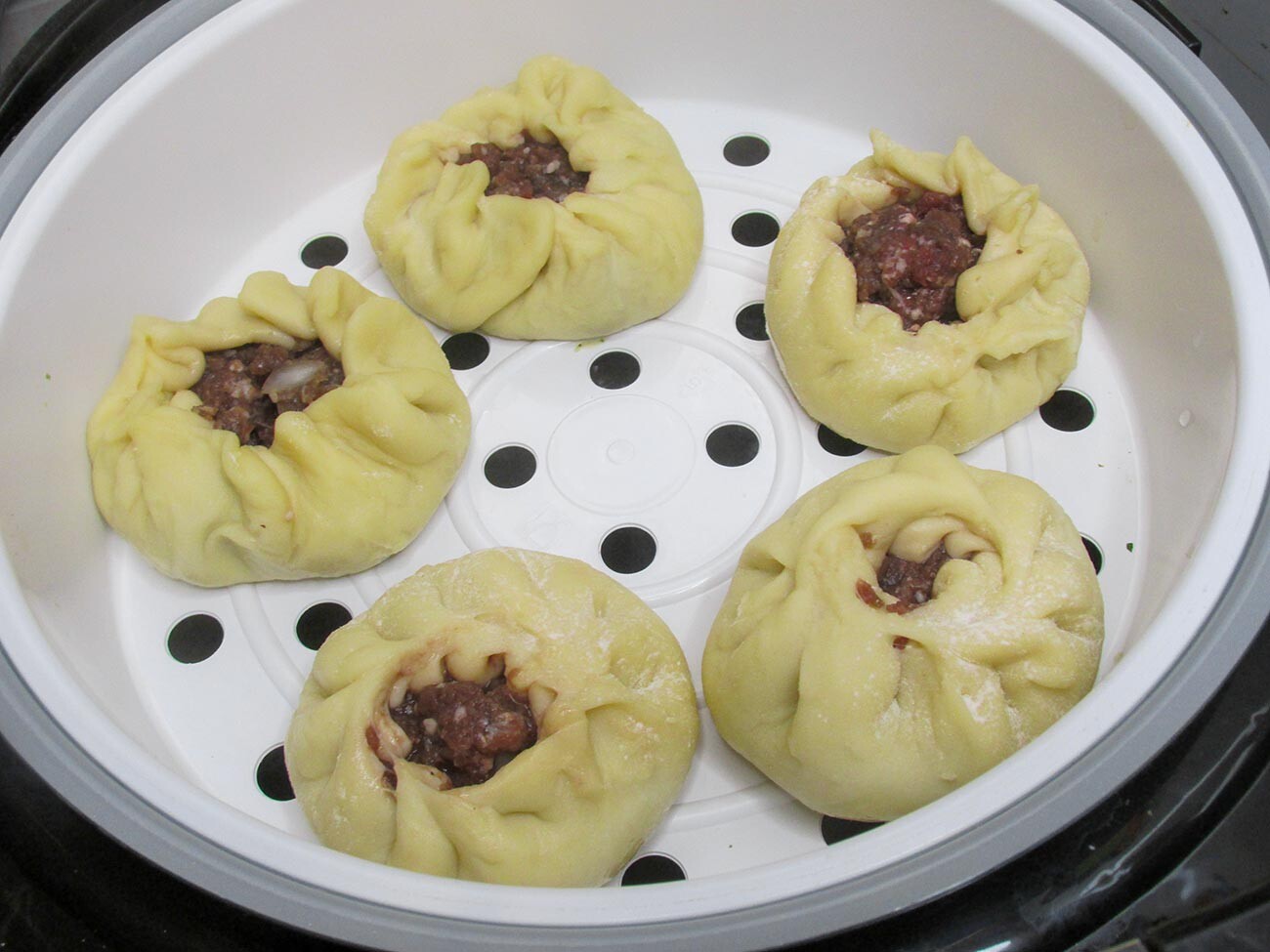 11. Our pozy are ready. They can be garnished with parsley or coriander, as well as tomato sauce and sour cream. 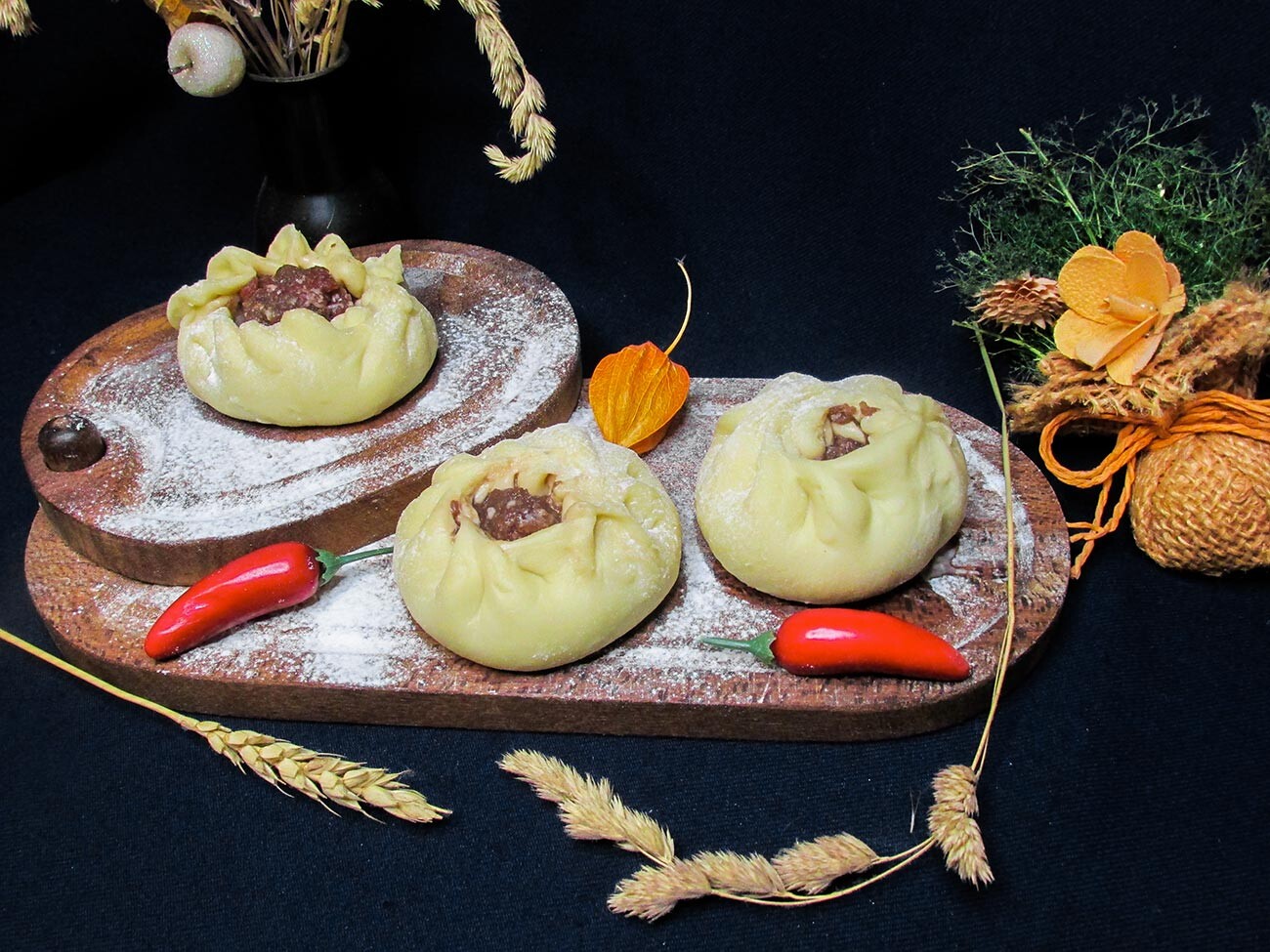