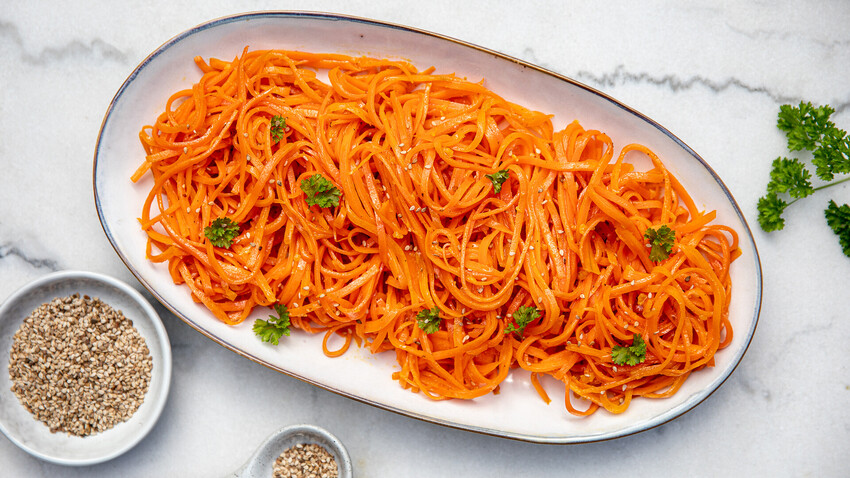 Yulia Mulino
This story is about how immigrants from Korea brought with them a method of marinating carrots, and it quickly became one of the favorite snacks in the Soviet Union.

Since childhood I remember this spicy, sweet aroma with hints of garlic when I walked through the market and reached the pickle and marinade section. Among the red heads of pickled garlic and the long curls of ramson, I was always drawn to the thin cut straws of carrots. These were Korean-style carrots, or Korean carrot salad.

The dish was first made by Korean immigrants in Imperial Russia. During Stalin's time, however, most Koreans were deported from their homes in the Far East to Central Asia.

In traditional Korean cuisine, it was customary to pickle radish, fish, and meat. Korean immigrants took the most common Soviet vegetable - carrot - and marinated it with their favorite spices. That’s how Korean-style carrots appeared. The dish migrated with the families of Soviet Koreans and became popular all over the country as Korean housewives started to sell it at the market.

Over time, the dish was adapted to the tastes of Soviet citizens. That is, it became less spicy. And now Korean-style carrots are an integral part of both the holiday feast and the daily menu.

Many Russian housewives try to prepare this dish at home. So, for a hundred years many variations of the dish have appeared, as well as many little tricks on how to make it.

To chop the carrots properly you need a special grater or device. If you don’t have one at home, you can cut the carrots into thin slices by hand. The work is labor-intensive, but worth it!

For the marinade usually one uses sugar, vinegar, spices such as pepper and coriander, and be sure to squeeze the garlic. Some recipes add soy sauce, sesame seeds and sesame oil. The carrots are doused mostly with hot oil. For more flavor, you can fry onions in it.

Serve Korean-style carrots as a snack or side dish. Also, these carrots will always be a great addition to wraps, sandwiches or in a salad. 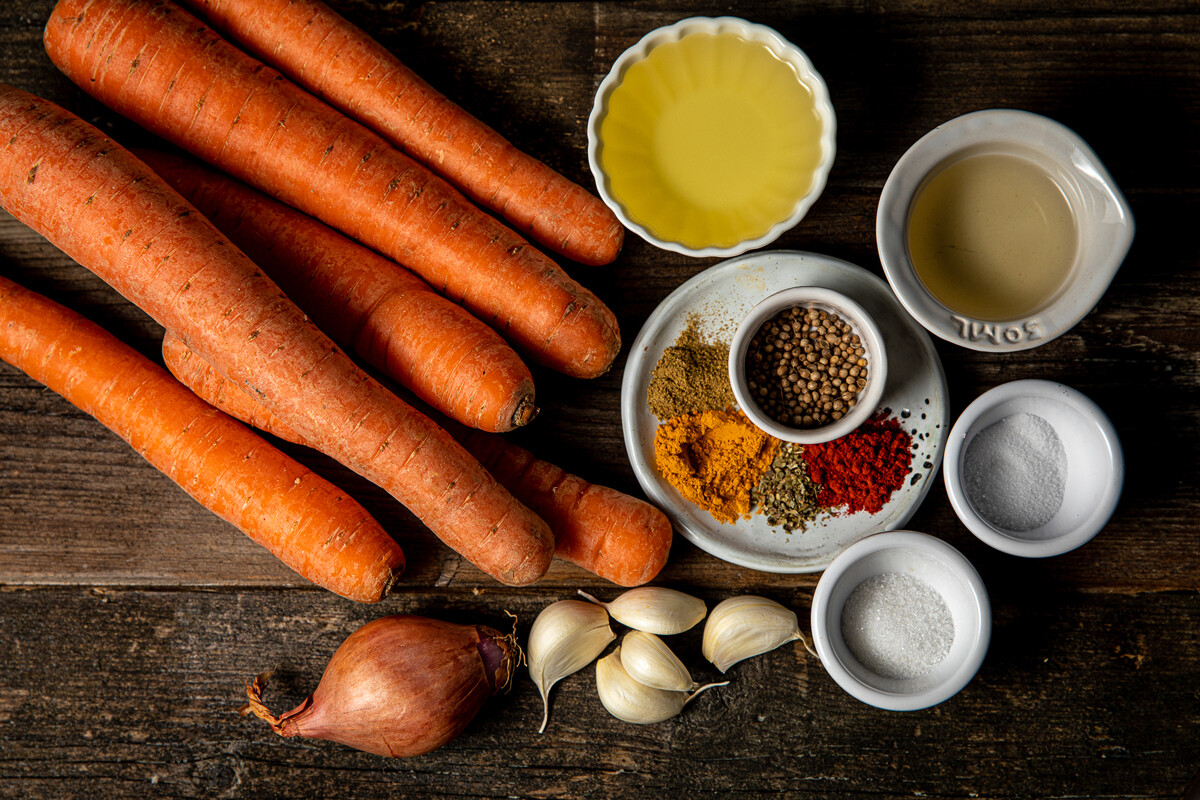 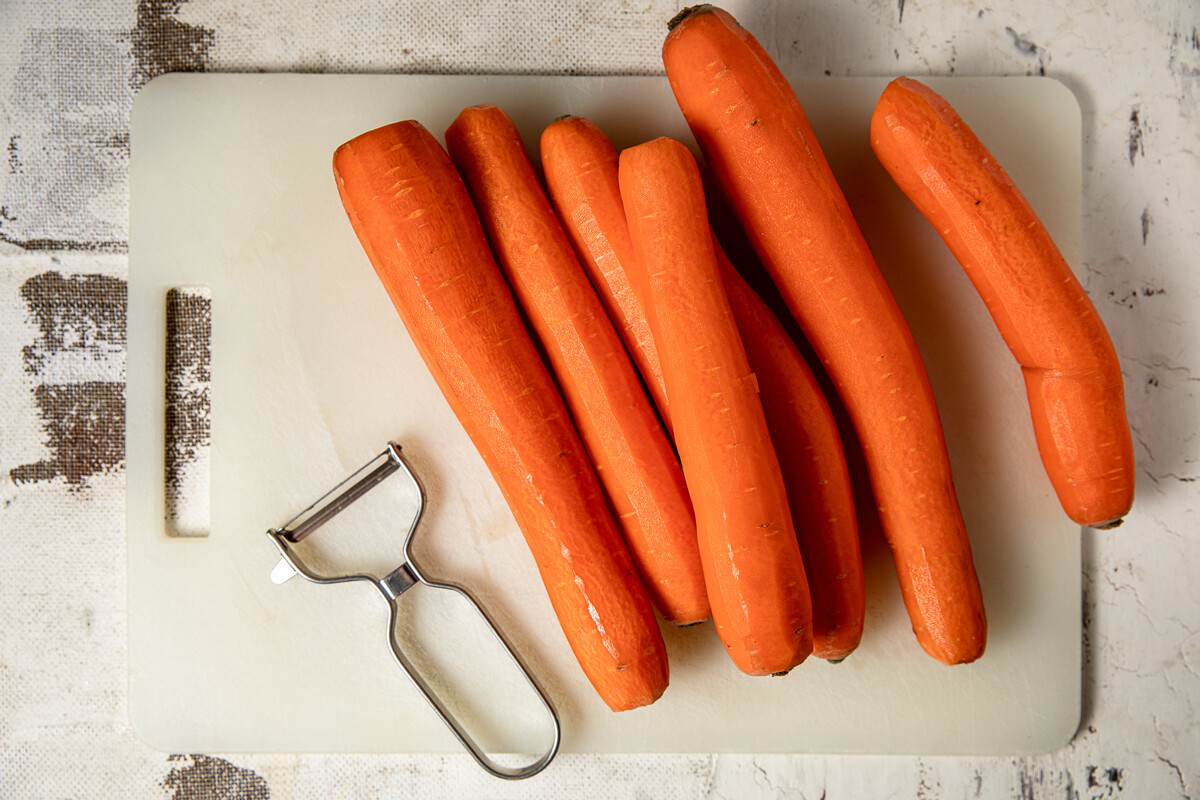 2. Chop them into thin slices using a convenient method. The usual flat grater won’t do. If you don’t have a suitable device, then shred by hand. 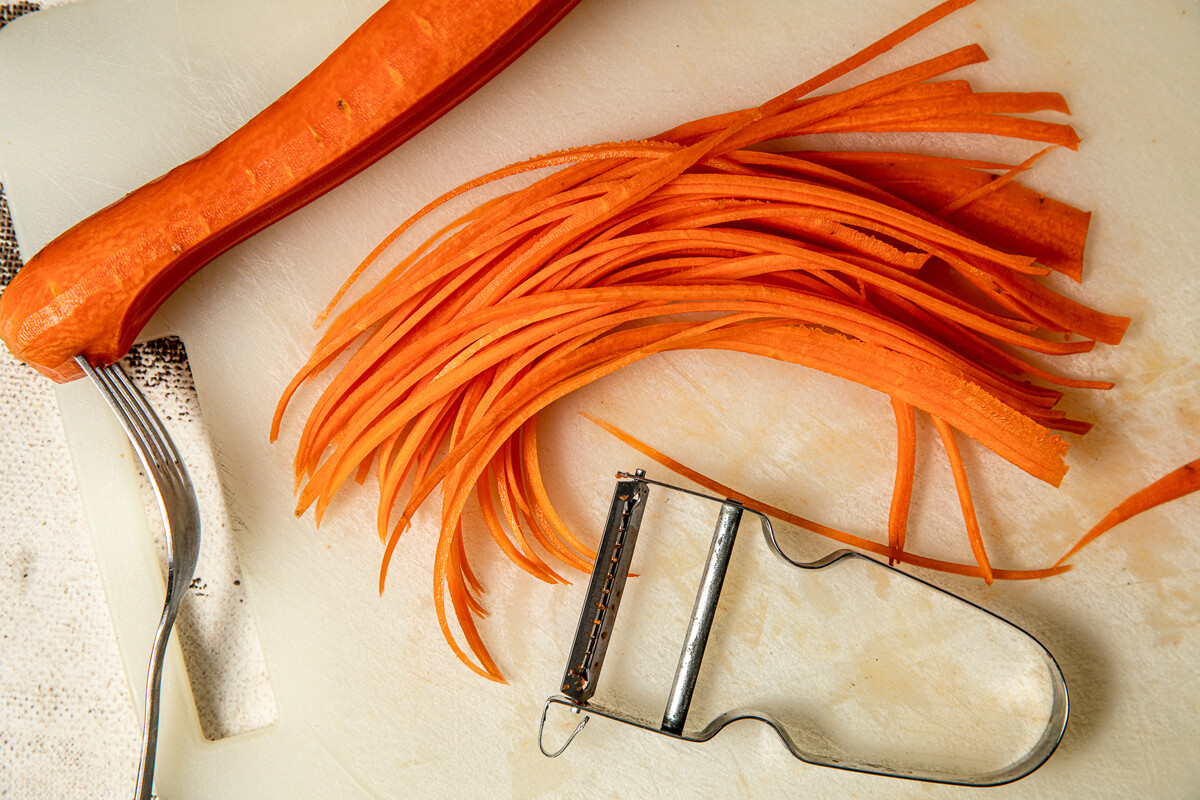 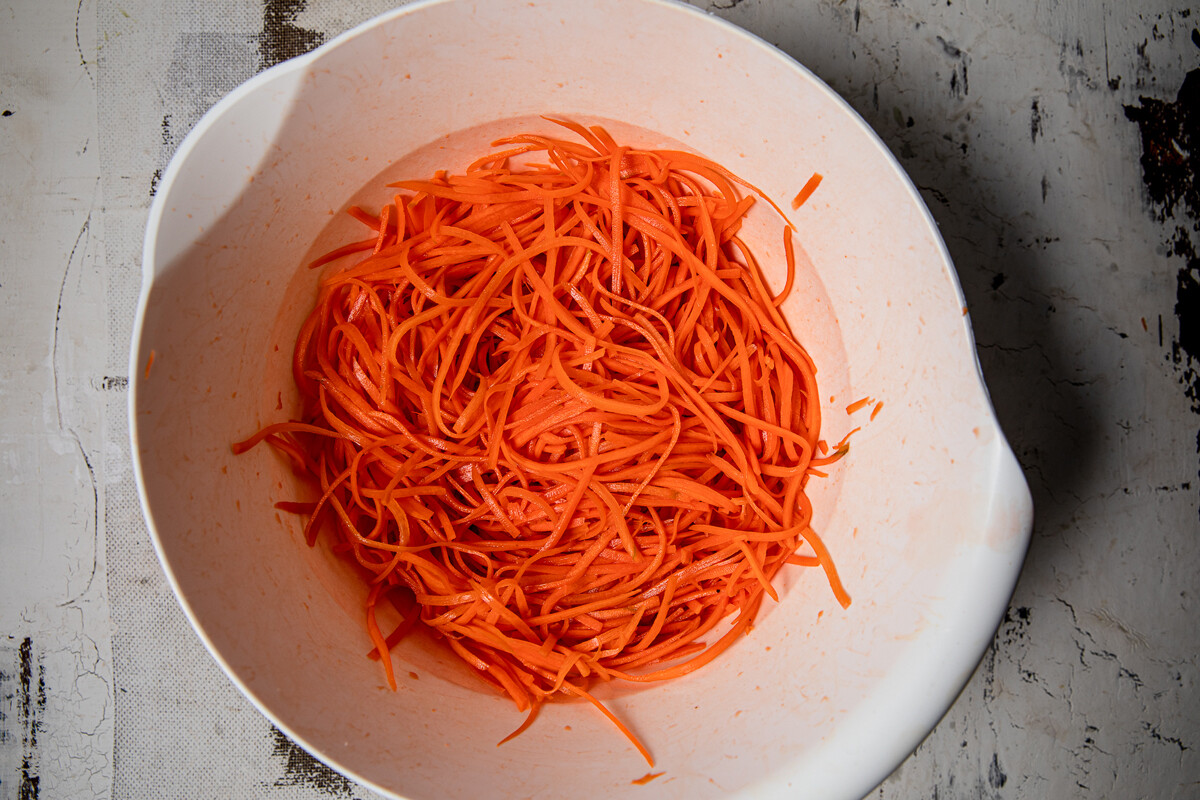 4. Heat the oil and add large chunks of onion and coriander seeds - they give the oil their flavor. After that, the onions and spices should be removed from the oil. 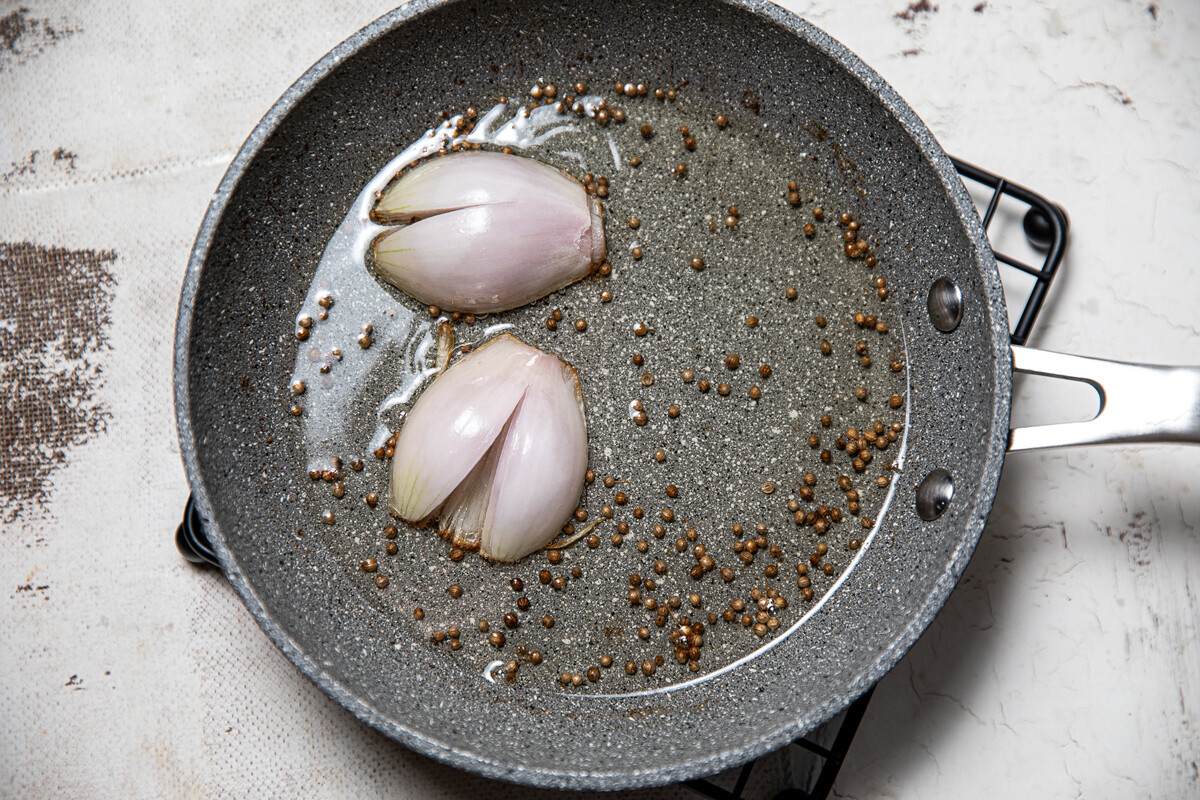 5. In the middle of a bowl with carrots, pour the sugar and squeeze the garlic. Add the spices. 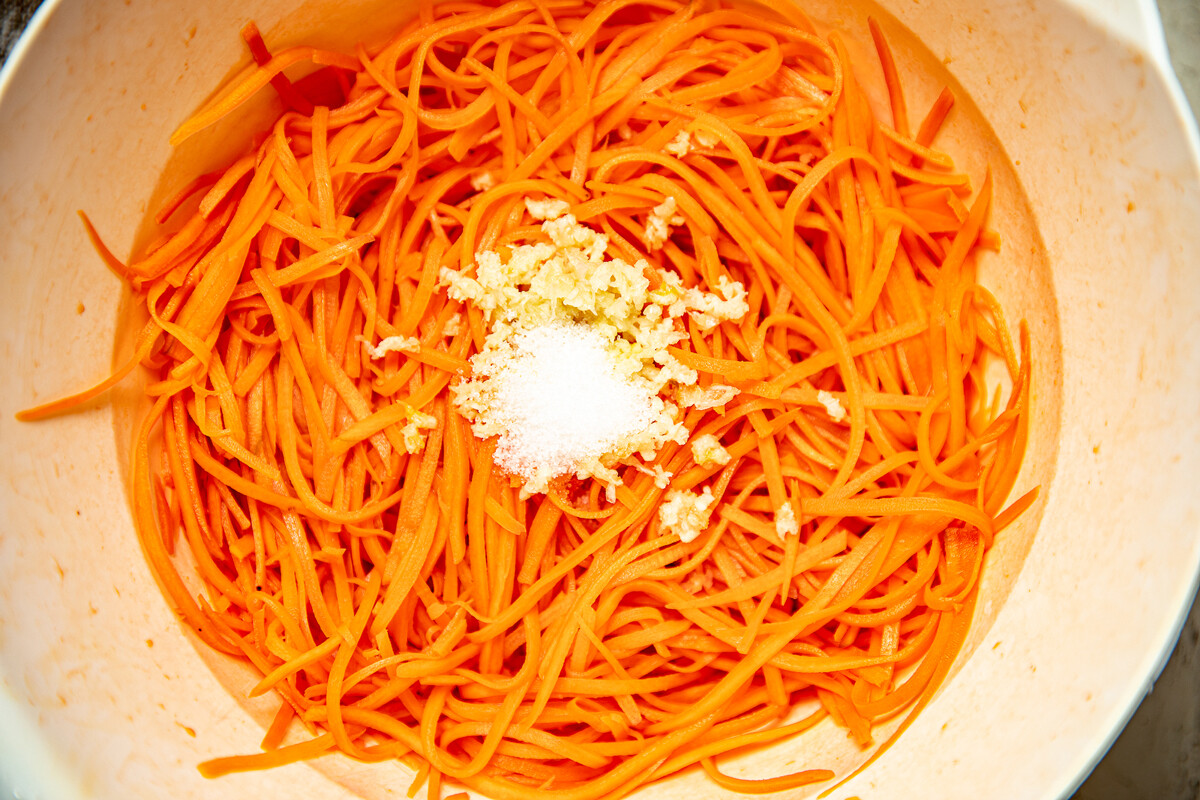 6. Pour hot oil in the middle of the garlic and mix the salad thoroughly with your hands. Add vinegar and mix again. Traditionally, a common household vinegar is used, but I went with rice vinegar. For a healthier version of this dish try using apple cider vinegar. 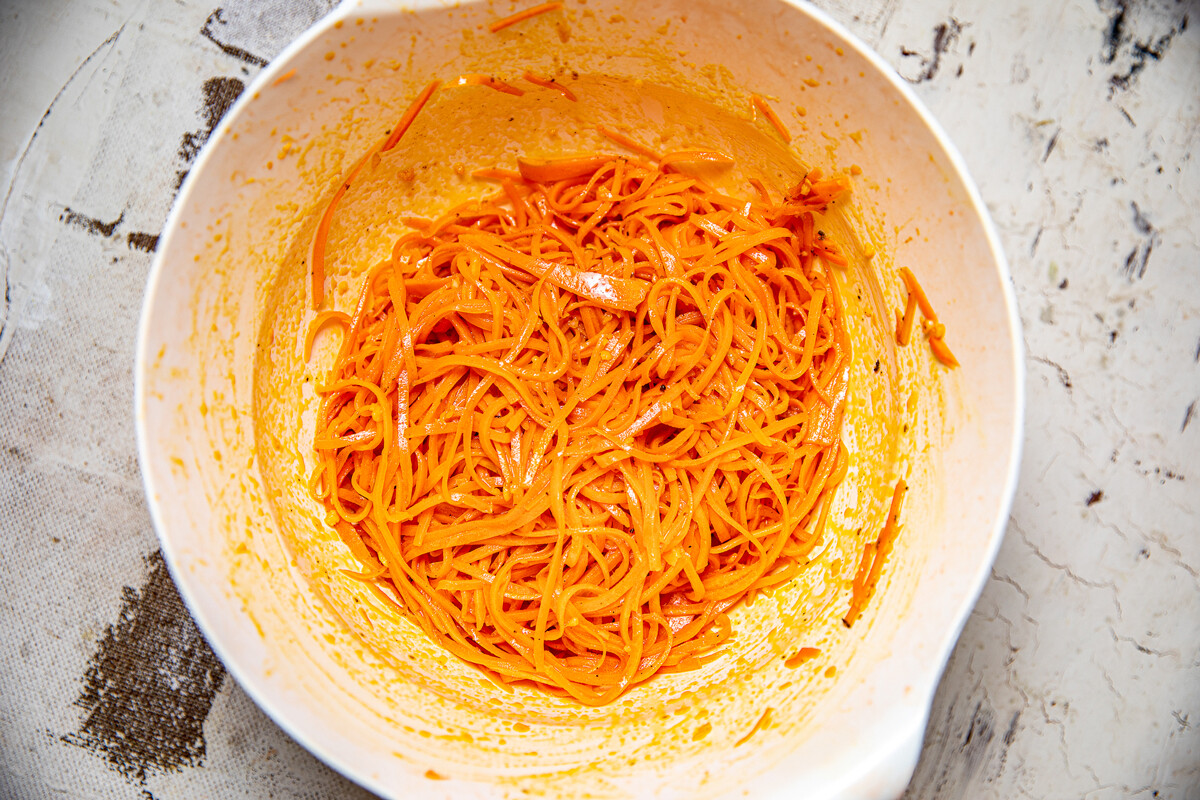 7. Place the carrots into a container and close tightly, so that all the carrots are covered with juice. You can also put it in a jar. Let the carrots marinate for at least three hours. Better to leave it overnight. Store the carrots in the refrigerator for 2 weeks. 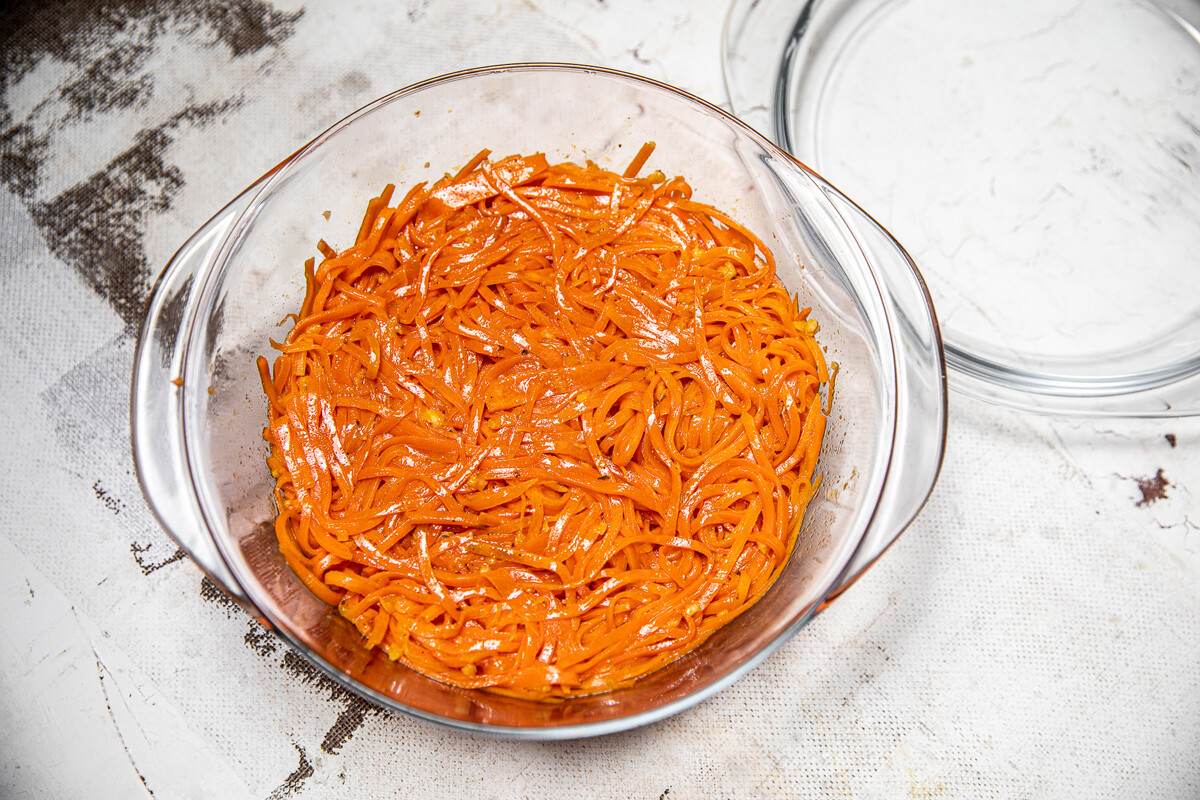 8. Serve as an appetizer, garnished with sesame seeds if desired. Enjoy! 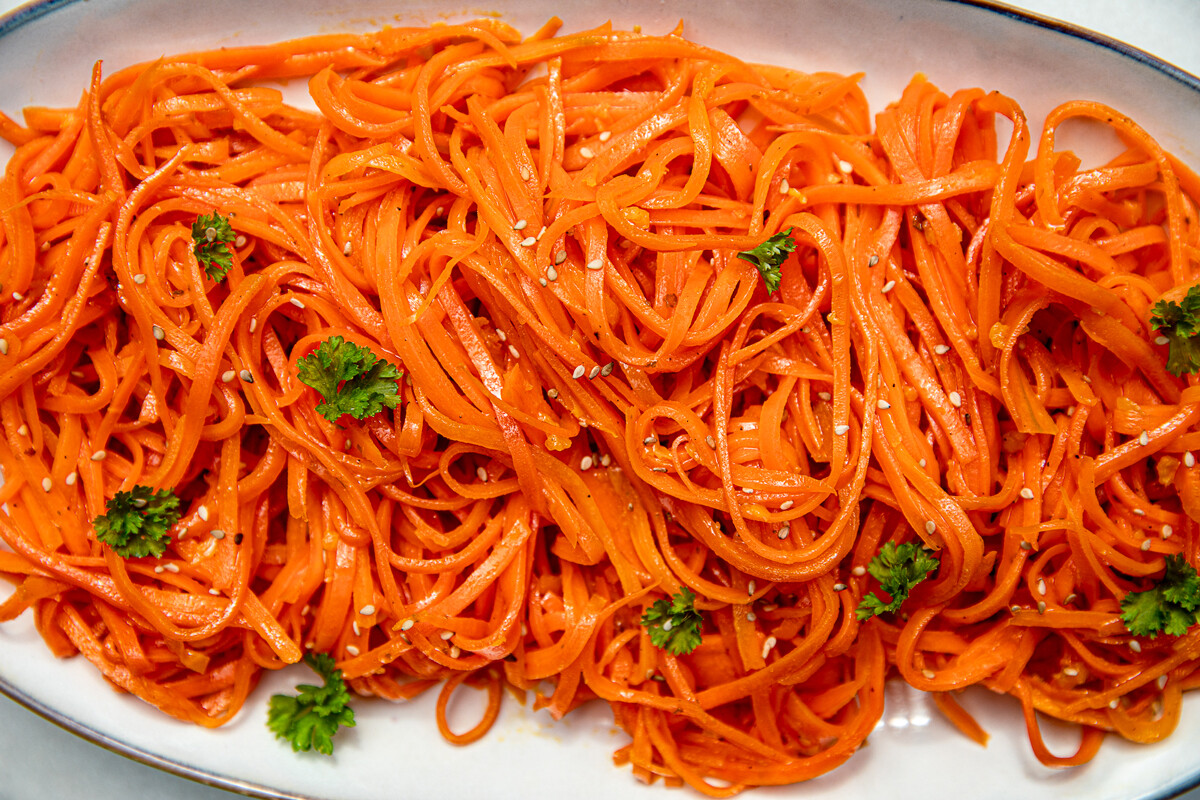