15 varieties of caviar and fish roe popular in Russia (PHOTOS) 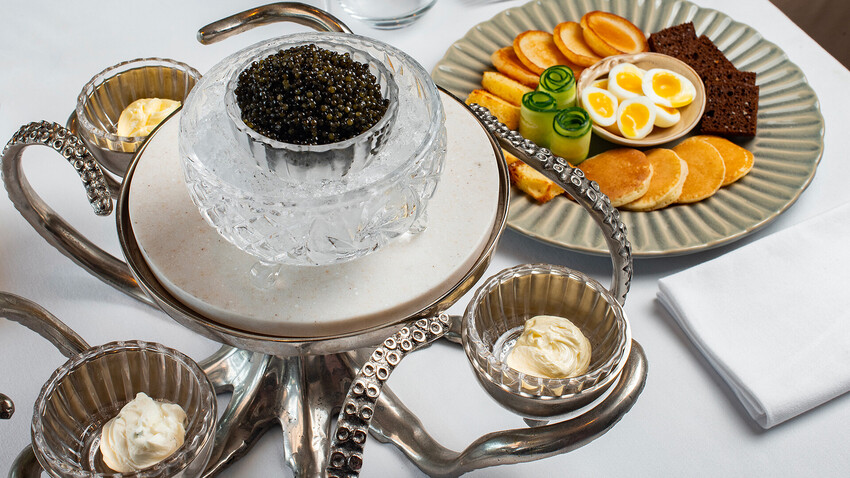 At the restaurant "London" in Sochi, you can try black caviar with pancakes, riga bread, quail eggs, cucumbers, cream cheese and two kinds of butter - classic and truffle.

Press Service
Russians enjoy not just red and black caviar, but also yellow, pink and beige varieties of fish roe. But what is the difference apart from the color?

Caviar (ikra) is categorized according to the fish family from which it is obtained and the method of fishing. Thus, the most frequently encountered varieties are black caviar, red caviar and common species roe (often called yellow or white roe). In Russian, all these types are also called ‘caviar’.

The culture of eating black caviar goes back at least 800 years. Mongol ruler Batu Khan’s secretary mentioned the delicacy in 1240 and, by the 15th century, black caviar from the Volga began to be supplied to the table of the Grand Princes of Moscow. It comes from the sturgeon fish family - beluga, ossetra, sevruga and sterlet.

Black caviar is an expensive delicacy best enjoyed chilled and eaten unhurriedly - for example, with champagne. It is served on spoons or on toast, in tartlets, on slices of cucumber or with boiled egg. Another traditional way of serving it is with pancakes. 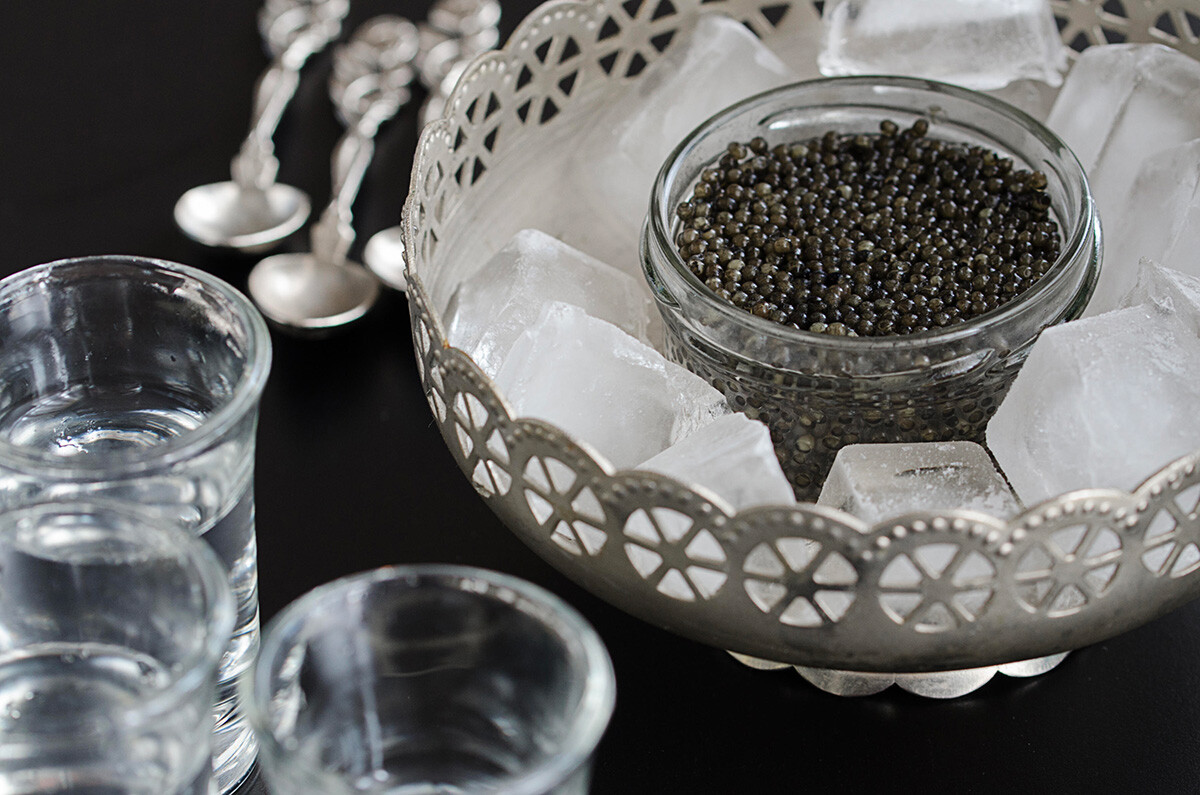 Beluga caviar is the gourmets’ favorite. It is one of the most expensive caviars and among the most highly valued for its flavor. Beluga caviar is slightly nutty to the taste and its grains have a golden hue. It is believed that the older the fish, the tastier is the caviar. The diameter of the grains is about 3.5 mm. 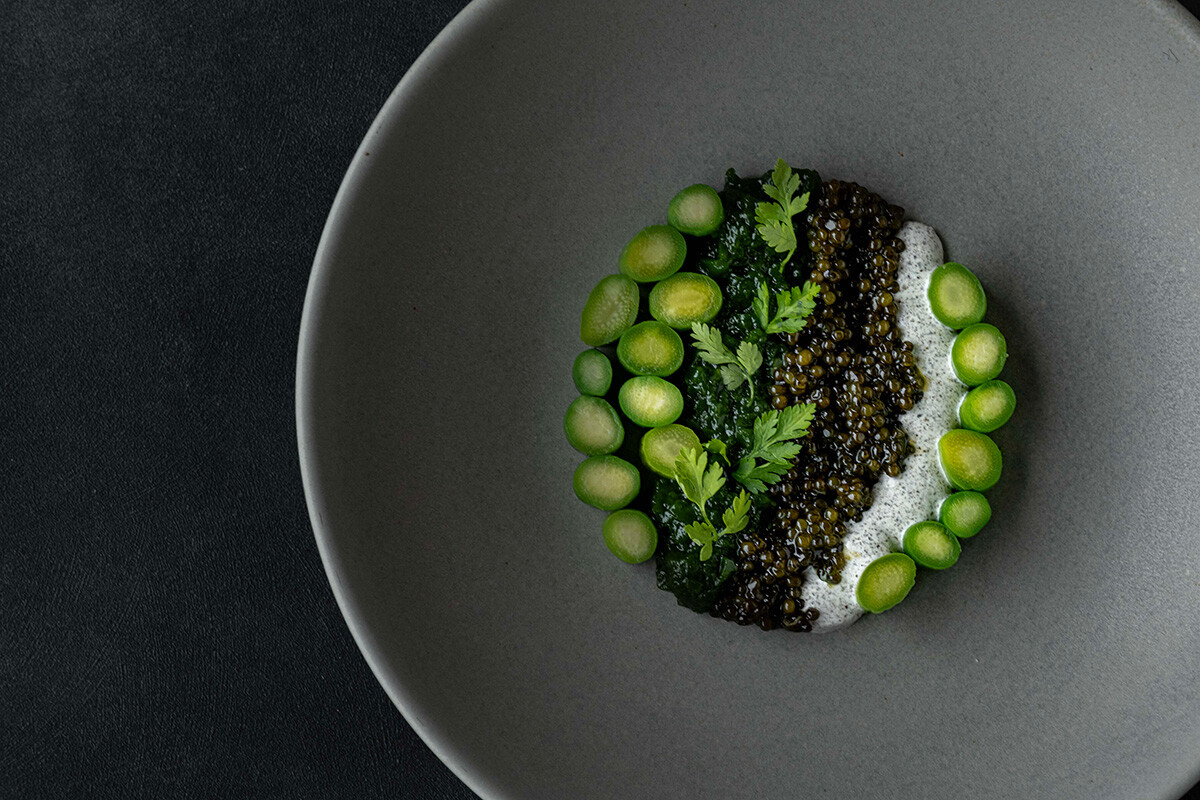 The grains of ossetra caviar are smaller than those of beluga - they reach up to 2.5 mm. Its color is yellowish-brown and it has an aroma of algae. It is also known for its low salt content, which may be an advantage for some people. In order to preserve the unusual taste of the sea, the saline solution prepared for it is less concentrated than for beluga. 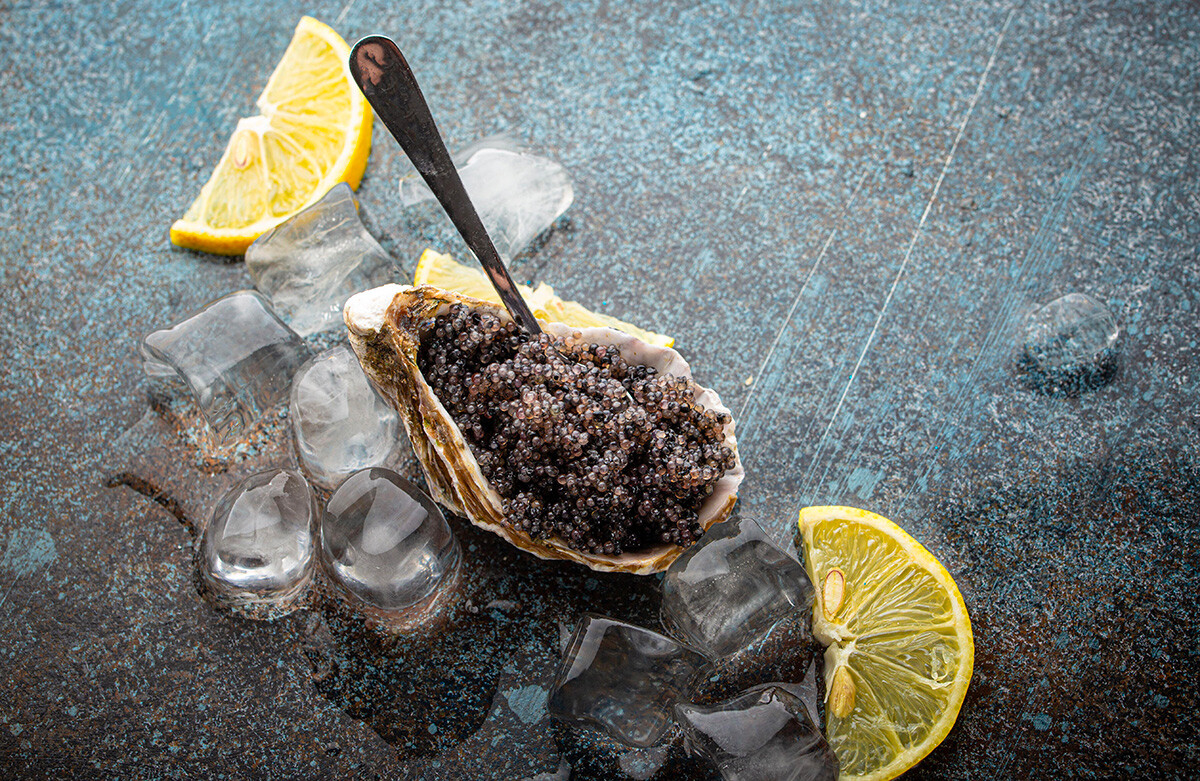 The starred sturgeon or sevruga used to be widespread in the Black, Azov and Caspian Seas, so its caviar is traditionally valued less than beluga and ossetra caviar.

The grains of sevruga caviar are quite small - their diameter is just 1 mm but they are firmer than beluga. It is considered not as tasty as other varieties of black caviar, but is distinguished by its high fat content. 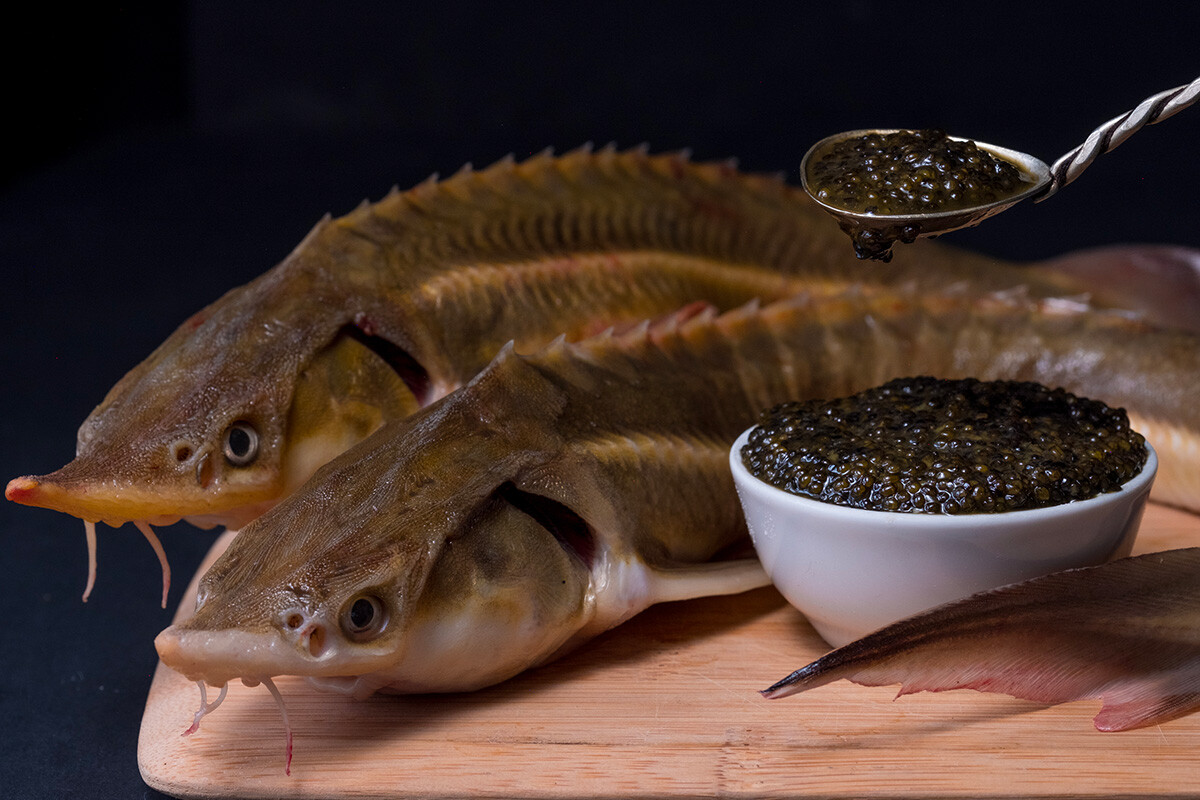 The connoisseurs advise to put a jar with caviar on ice for 20 minutes before serving. It is better to eat caviar from the skin of the hand, placing it between the thumb and forefinger, or with a silver spoon.

The grains of sterlet caviar are about 2.5 mm in diameter. It is black or gray-black in color, and has a thin outer membrane. Sterlet caviar tastes of the sea, but the flavor is not as strong as that of ossetra. It leaves a fishy aftertaste. Sterlet caviar is much cheaper than beluga or ossetra, so it is worth giving it a closer look. 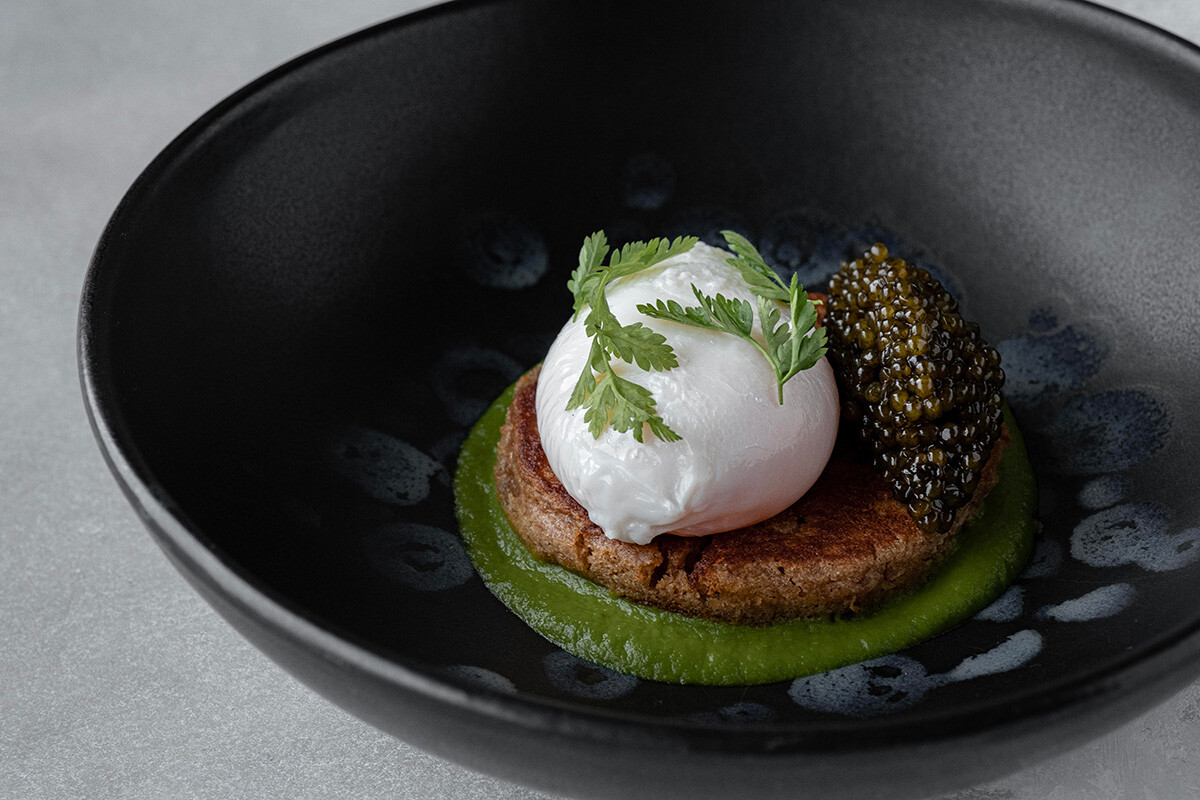 Kaluga caviar comes from a hybrid of the beluga and the ossetra. This is one of the largest fish of the sturgeon family and can weigh up to 1,000 kg. The flavor of kaluga caviar is similar to beluga - “nuts with cream”. The diameter of the grains is 2-3 mm. They are dark gray in color, sometimes with a green tinge.

Red caviar (salmon roe) is the roe of salmonid fish - pink salmon, keta, sockeye salmon, etc. It is less expensive and more popular than black caviar. In central Russia, it became widespread only in the 19th century, because the main region of origin is the Far East, from where it was always difficult to have it delivered.

Red caviar is an integral part of any festive table in Russia. It is delicious served on bread or toast or in tartlets. It is also used for garnishing salads and pelmeni (dumplings) and is generously served on pancakes or as a filling for eggs (see recipes here). A tin of salmon roe is also a good present to take with you when you are invited to someone’s house. 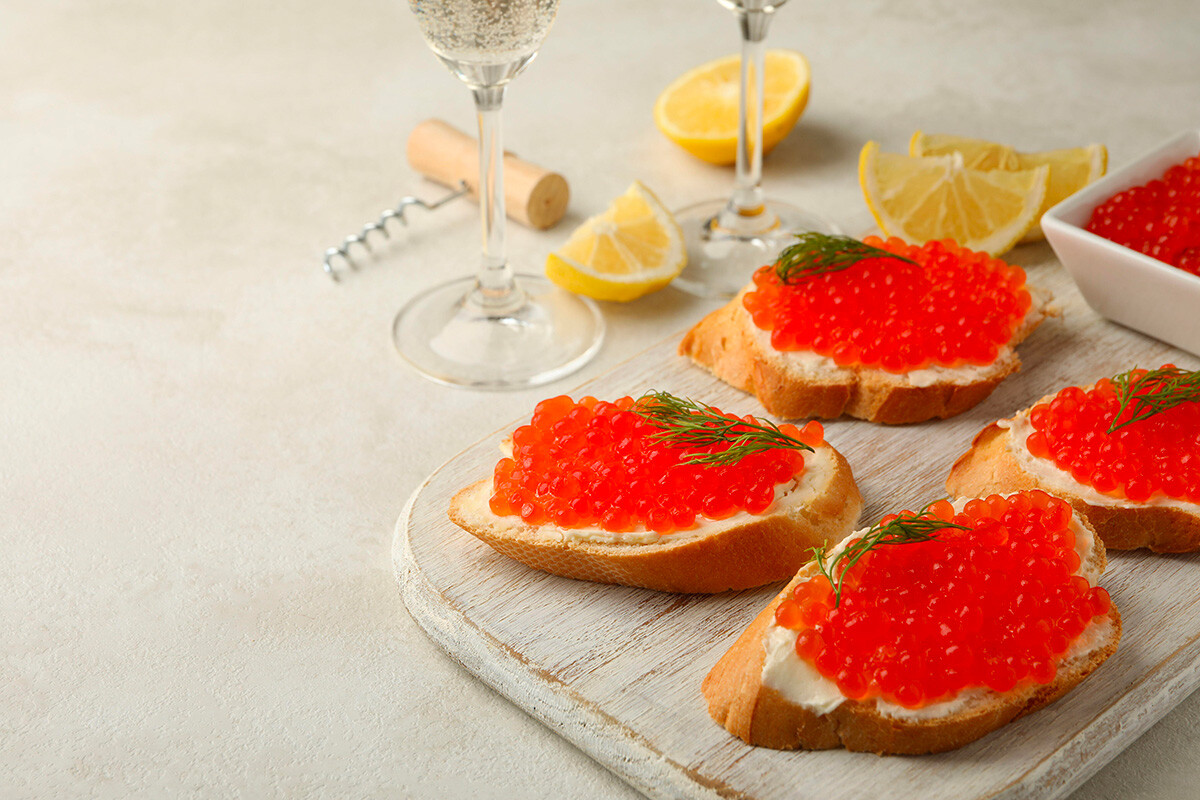 The ideal drink to go with caviar is champagne.

This is the most popular fish roe in Russian shops. Thanks to the high fertility of pink salmon, its roe is the one most frequently served with bread and butter or as a salad garnish at a Russian New Year party. Pink salmon roe has a bright orange color and pleasant fish flavor. 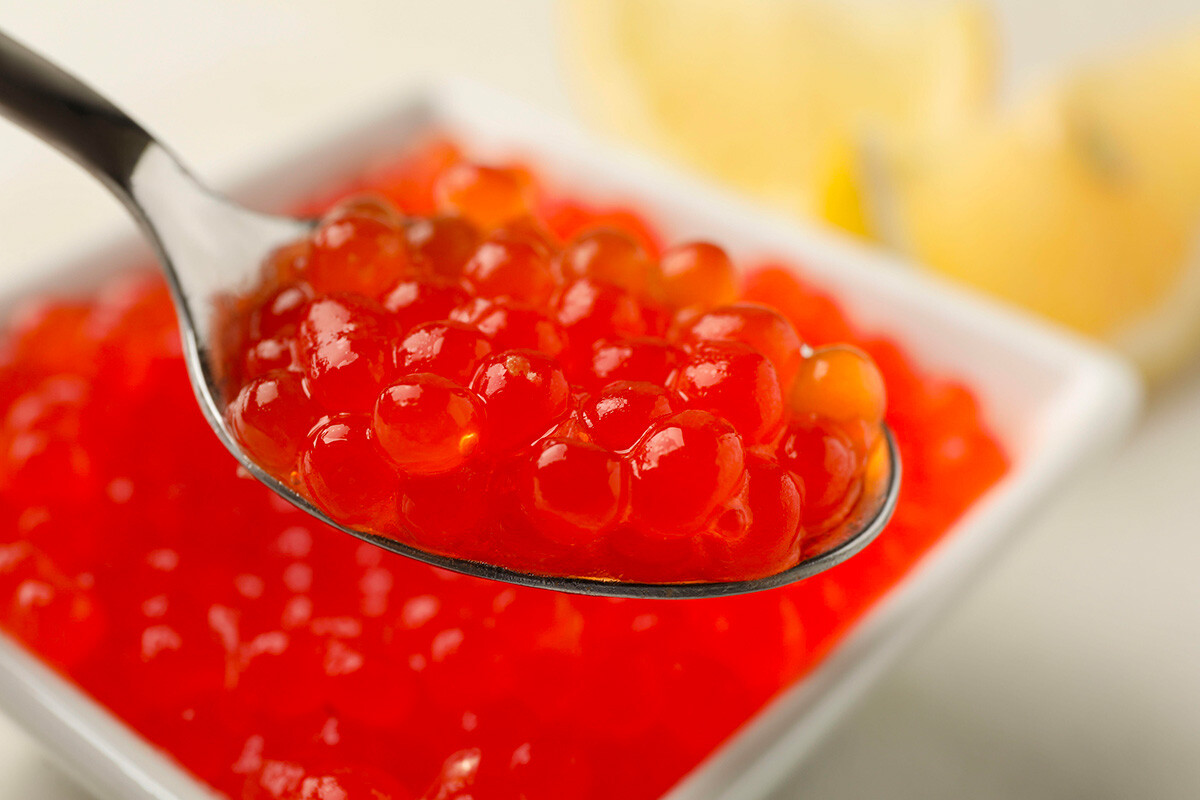 The keta salmon roe is distinguished by its amber or dark orange color.

Keta salmon roe grains are large and firm and so keep their shape well. In flavor, it is similar to pink salmon roe, but can taste a bit bitter. 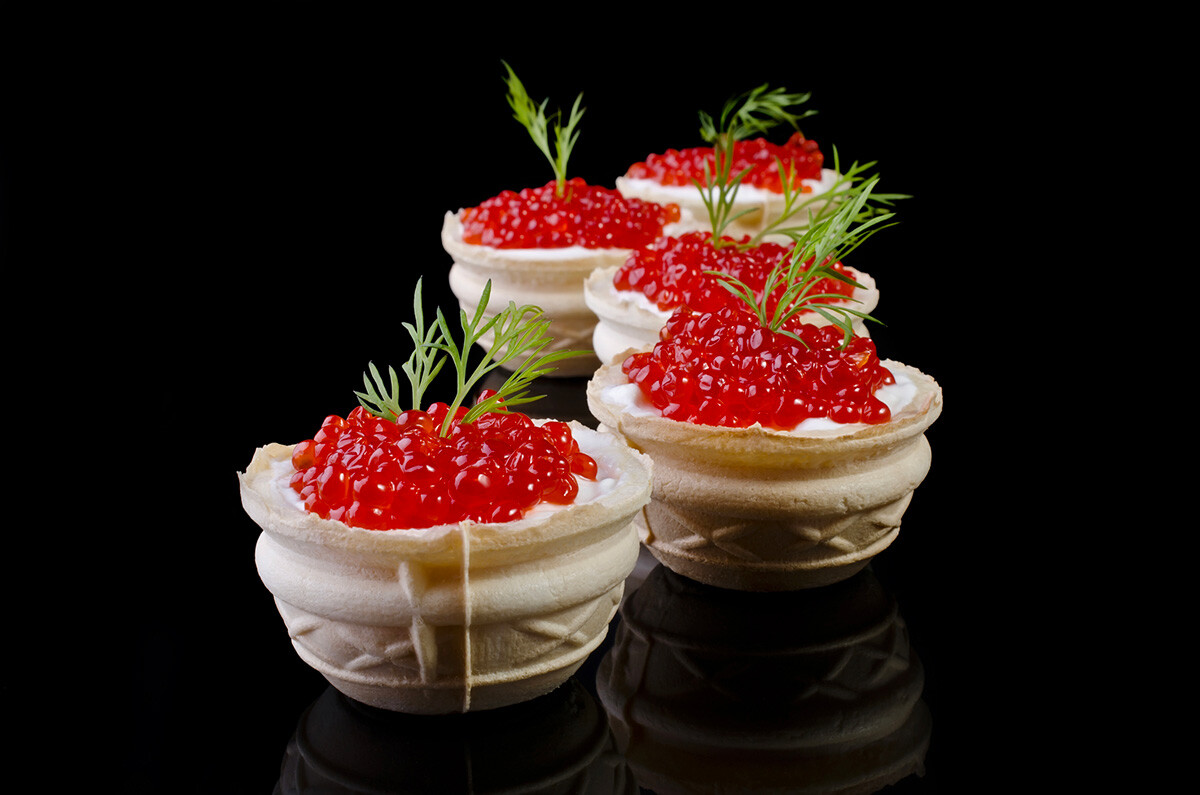 Tartlets with caviar and cream cheese.

Sockeye salmon roe has small dark red grains with a soft outer membrane. They are a little bitter and have a characteristic fish smell, which puts off some people. On the other hand, sockeye salmon is one of the first of the salmonids to start to spawn - in late May - so its roe can already be purchased in the early months of summer. 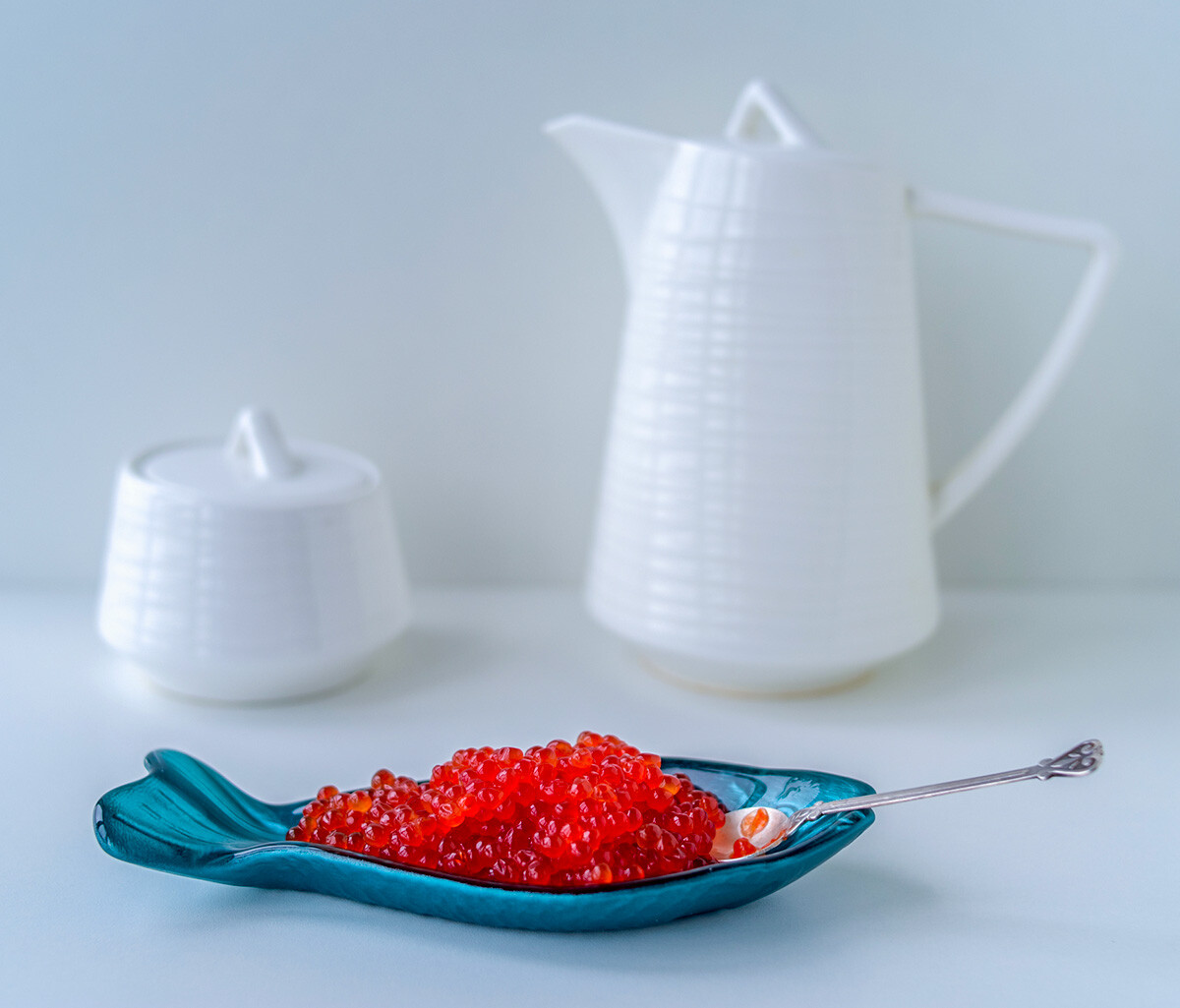 This is a roe with an intense claret color and a slight bitterness. It is regarded as the healthiest of the red roe varieties, because of its wealth of nutrients, which include vitamin D, folic acid, calcium, phosphorus, fatty acids, iron, iodine and others. 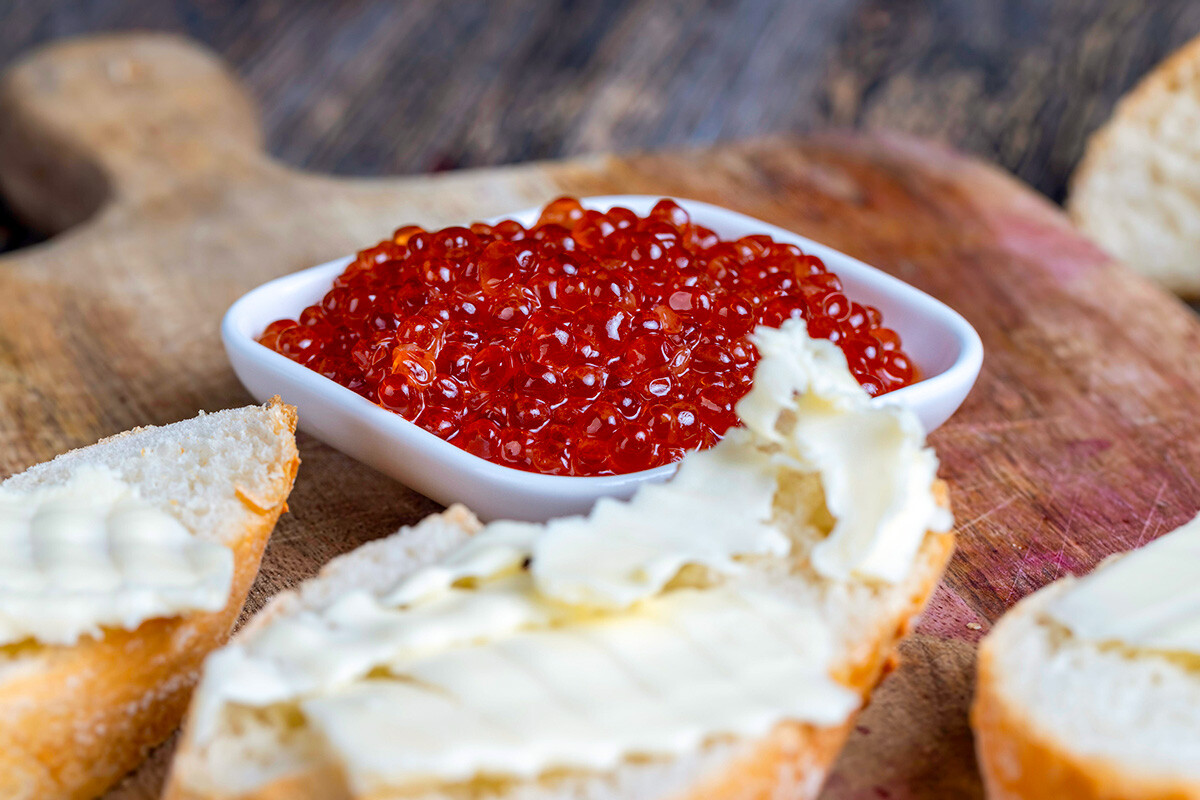 This bright red roe is salty and a little bitter to the taste, so it is rarely bought for use on bread. But, it goes well with cream cheese, dairy cream or sour cream. It has quite a sticky consistency, so it is often also used for sushi rolls.

Chastikovaya ikra, or common species roe, includes the roe of any fish not in the salmon or sturgeon family. And, strictly speaking, the word chastikovaya relates not to a type of fish, but to the method of fishing using small mesh nets. Pike, bream and pollock are the most common fish caught in nets of this type. Chastikovaya ikra - the roe of these fish - literally means “small mesh roe”.

Like its red counterpart, common species roe goes well with zakuski (the Russian word for appetizers and accompaniments to vodka) containing eggs, cucumbers and various types of seafood. Pollock and cod roe is used to flavor salads or paste. It can naturally be spread on bread and butter and some people add diminutively-sized roe of this kind to pancakes or griddle-cake batter. Give it a try! 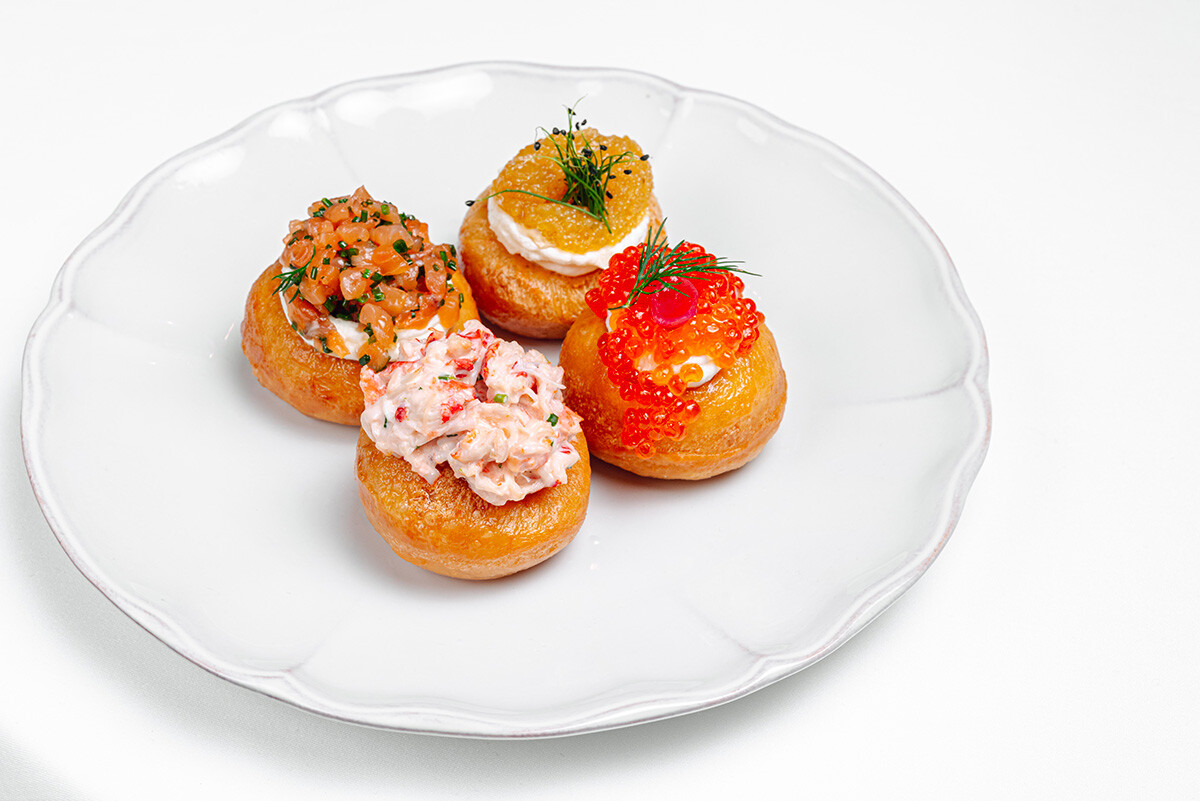 Puffins with pike and salmon roe.

Pike roe has a distinctive yellow or even amber color and has small grains up to 3 mm in diameter. While nowadays, pike roe has been somewhat eclipsed by other varieties, under Ivan the Terrible it was highly valued. It is full of protein and has a low fat and calorie content. 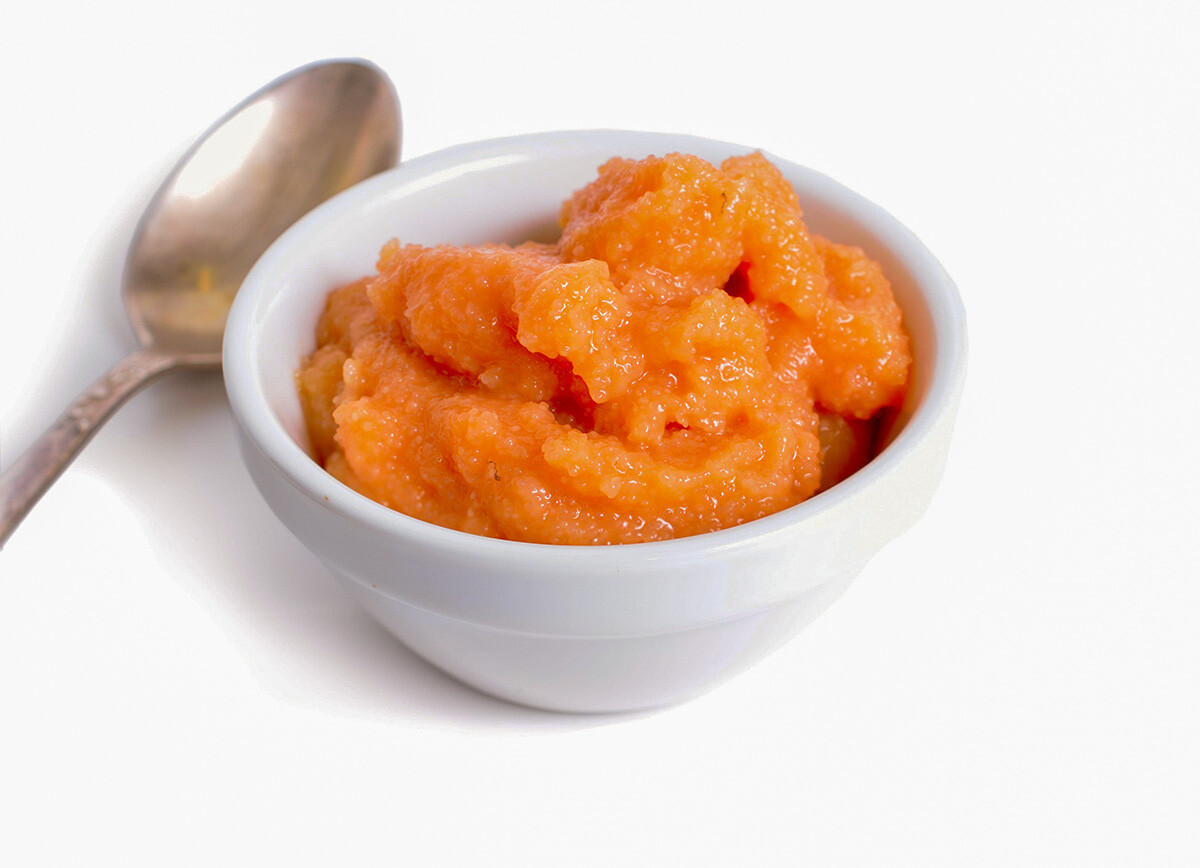 Tasty and not expensive roe.

This roe has diminutive grains and a light beige or pink hue and resembles a paste. It has a very pronounced fish smell and a somewhat bitter flavor, so if you are going to serve it on bread, choose a fragrant dark variety. 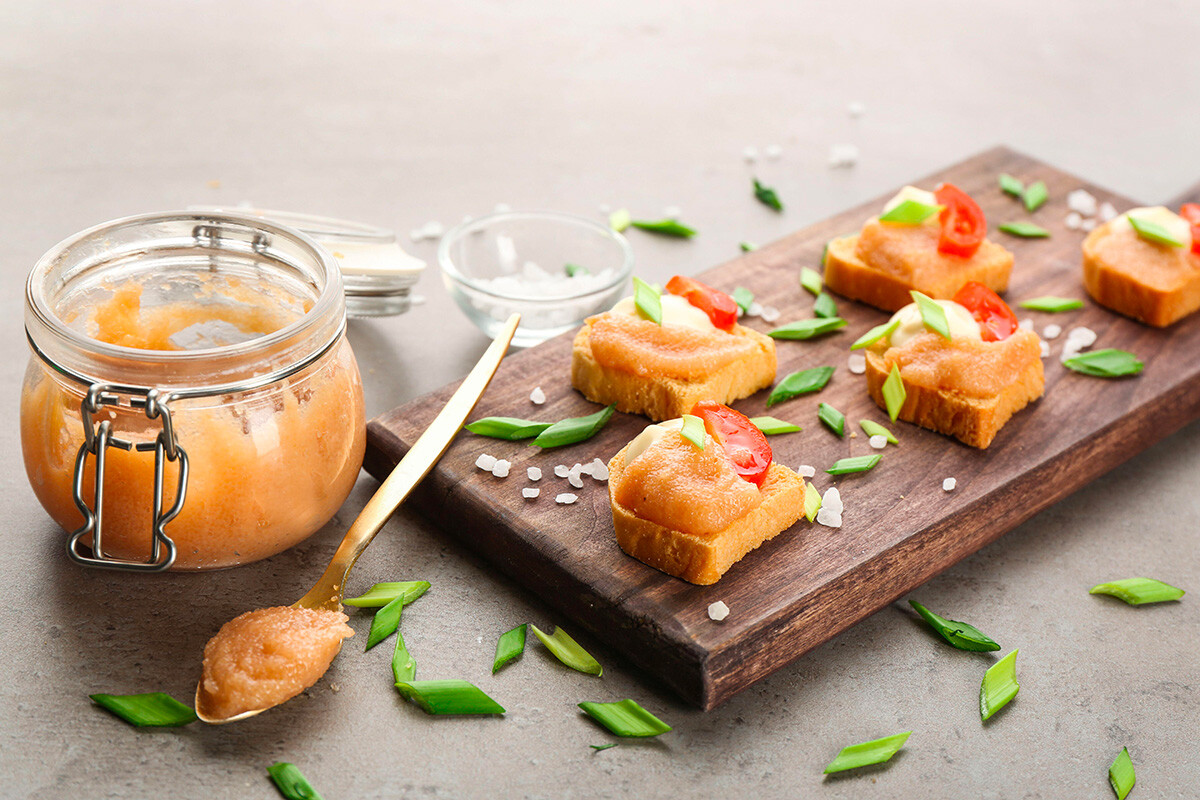 Cod roe contains a lot of polyunsaturated fatty acids omega-3, which serve for the prevention of heart and vascular diseases.

In terms of flavor, cod roe can easily compete with more expensive varieties. It is peach colored and the grains are very small (1.5 mm). Cod roe has practically no fish smell, so it is extensively used in complex dishes. 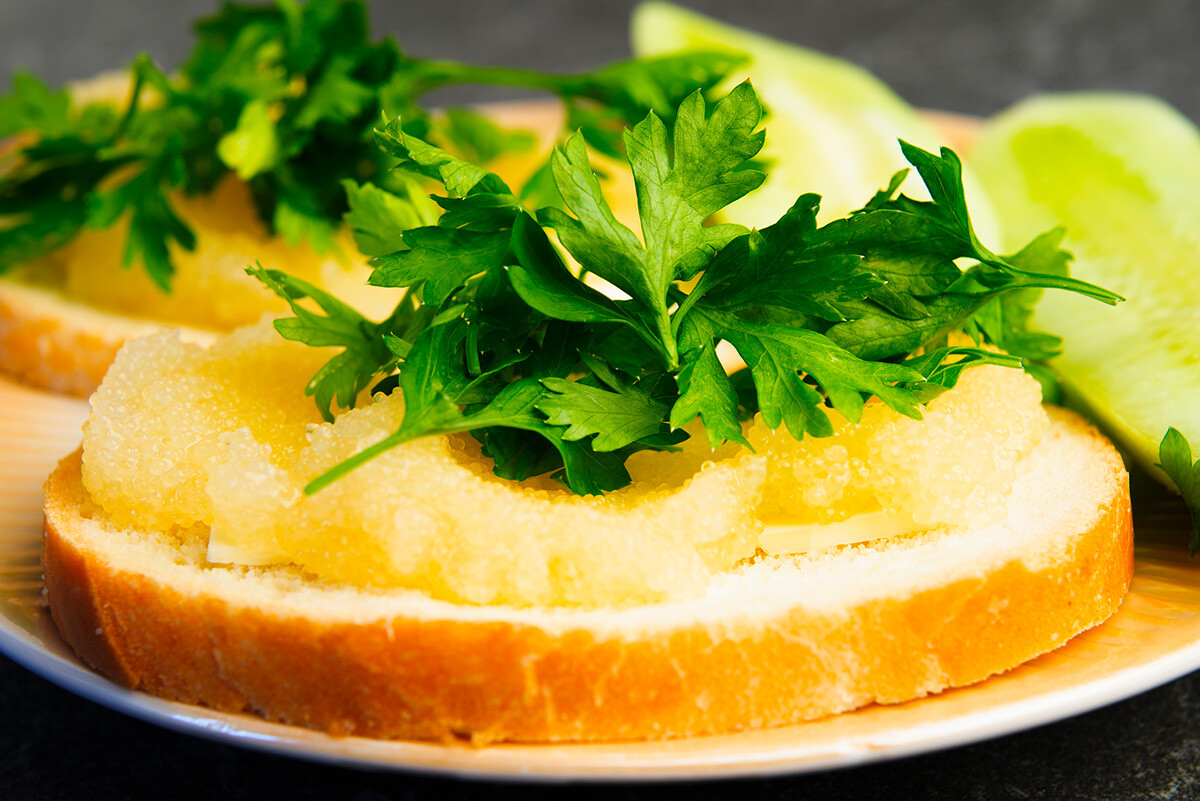 Bream roe is perfect for sandwiches for a regular family breakfast.

Bream roe is golden-yellow in color and the grains are small and crumbly. It is eaten both raw and salted and is also fried with a coating of flour or added to pancake batter. 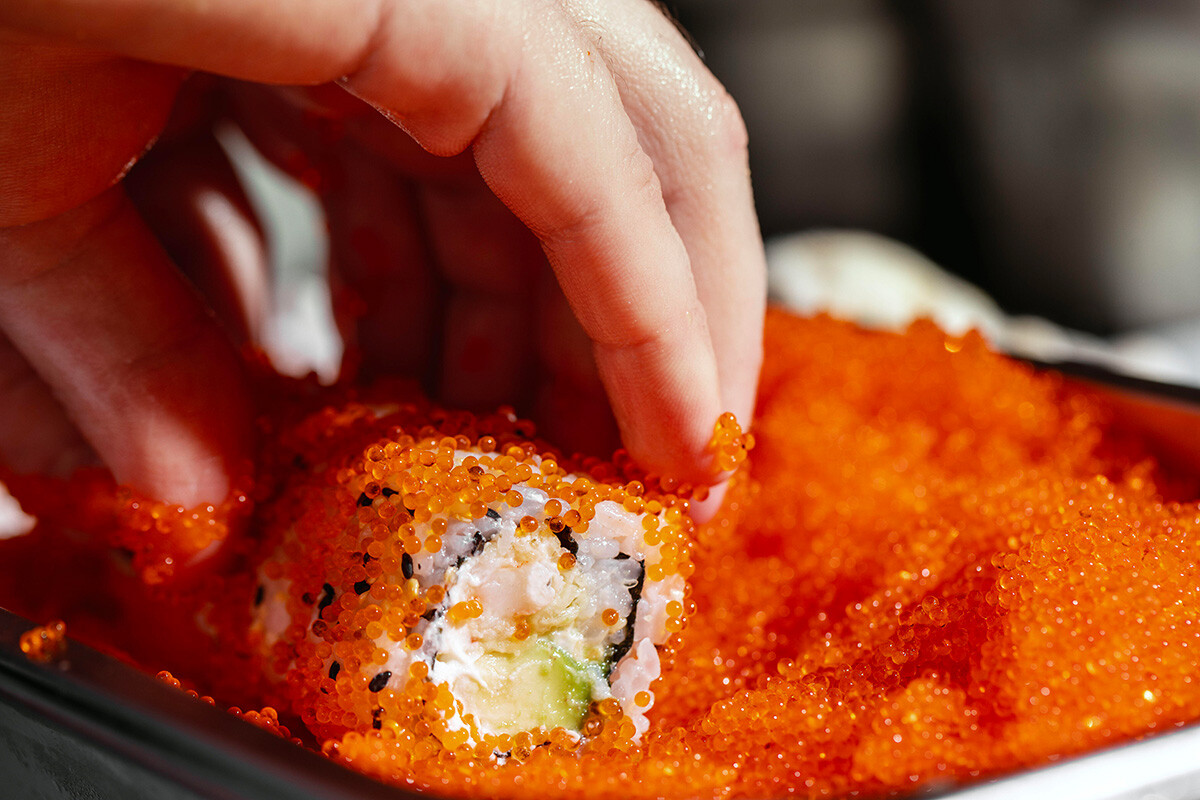 For a long time, flying fish roe was considered an exotic product in Russia.

Flying fish roe (tobiko) with its mild, sweetish flavor gained popularity in Russia with the arrival of Japanese cuisine - it is a frequent addition to sushi and sushi rolls. It is bright orange in color, so it is also used for garnishing dishes.