A guide to Far Eastern oysters, an underrated Russian delicacy 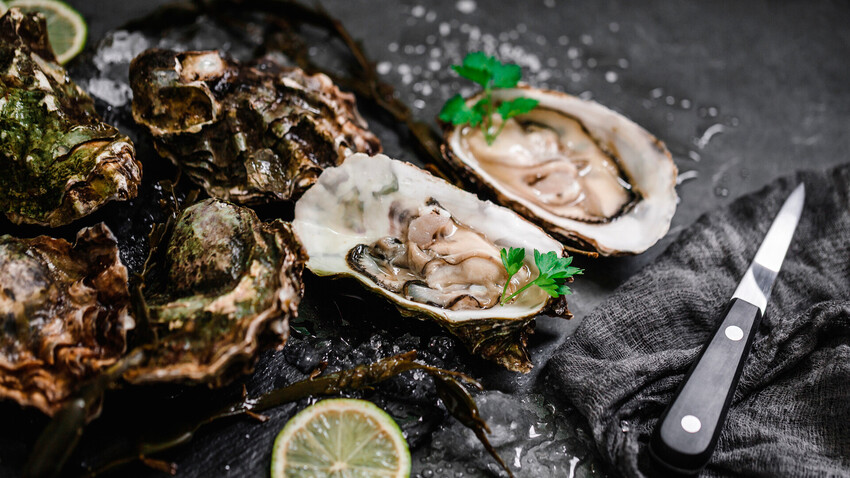 Oysters are famous as a French delicacy, but Russia has an abundance of these slimy sea critters.

Legion Media
Many people forget that Russia is also a Pacific nation. That juxtaposition gives access to all the delights of the ocean, such as oysters! Which Russian oysters have the most beautiful shell, which crunch like a cucumber and which go best with vodka?

Wild oysters from the Russian Far East are large in size and don’t lend themselves to international size classification. For example, Khasan oysters can weigh up to 400 grams, while the world-famous Fine de Claire oyster weighs only 60-80 grams.

They differ not only in size - Far Eastern oysters are less intense in flavor than their Atlantic cousins. But they, too, have flavor variations - from a salty sea taste to sweet vanilla.

In 1904, well-known author Anton Chekhov shared his memories of visiting Russia’s Far East in a letter to writer Boris Lazarevsky: "In Vladivostok, at least in peacetime, life is not boring, but European in style... The oysters along the entire coastline are large and delicious." 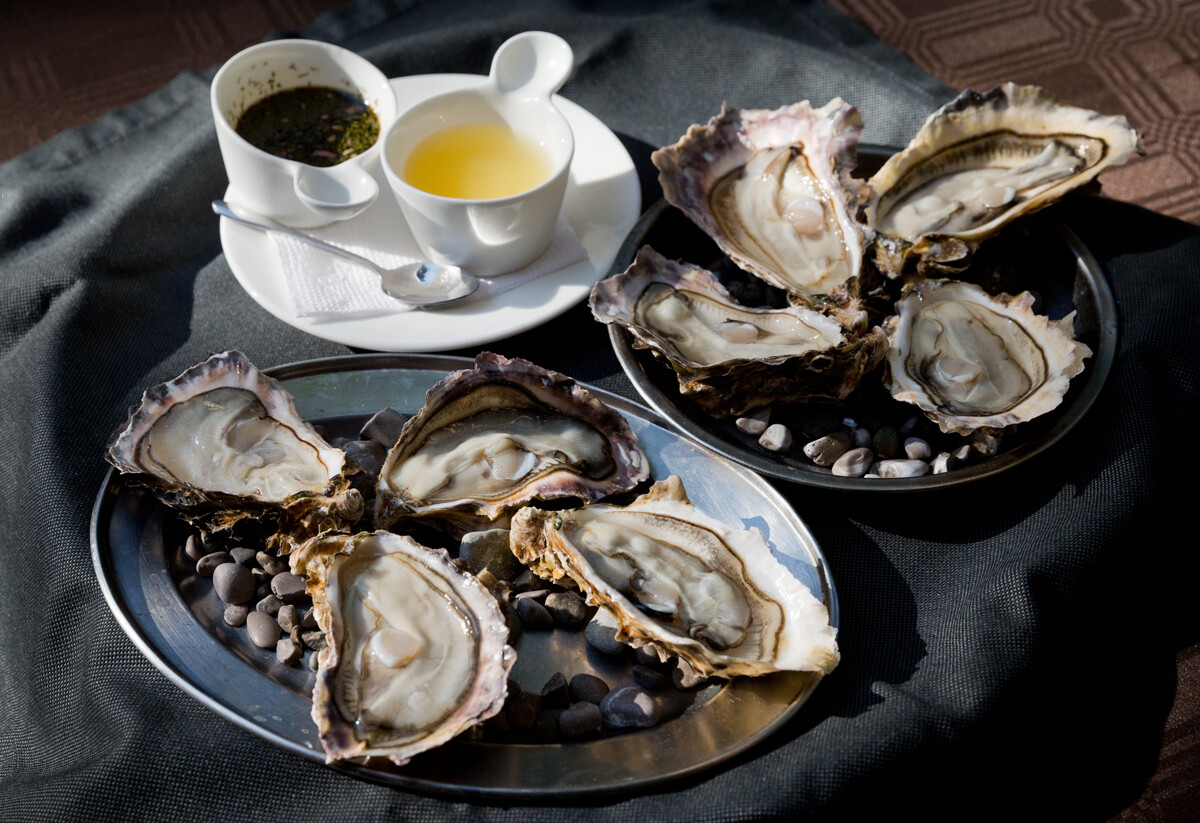 In Russia, people developed a taste for these oysters only recently. In Soviet times, the locals did not regard them as a delightful delicacy and, as for Moscow, they simply never reached that far. On the other hand, the Japanese were happy to buy them at very low prices.

For their part, Russians preferred other mollusks - crabs, sea cucumbers, prawns and scallops. Nowadays, however, some shellfish and fish species have become more scarce and shipping oysters from Europe is expensive; hence, interest in Russian oysters has increased. Furthermore, it has proved possible to improve the logistics – oysters are now served either raw or cooked not only in restaurants in the Far East but also in Moscow and St. Petersburg.

Far Eastern oysters have a striking variety of shells. In addition to their beauty and unusual taste, they are a treasure trove of trace elements, including zinc. You’re advised to eat oysters if you are anemic; 6-10 oysters can provide the daily requirement for iron. They are also rich in omega-3 polyunsaturated fatty acids.

Raw oysters go well with lemon juice, but they can also be accompanied by elaborate sauces, wine or strong liquors.

Most oysters in the Far East are fished off the coast of Sakhalin and in the Primorsky and Khabarovsk territories. These are wild oysters that grow naturally, so they are not calibrated according to the international system of size measurement like farmed oysters. Depending on the area they come from, several varieties are differentiated. Here are the ones we recommend trying.

1. Khasan oysters - the most beautiful 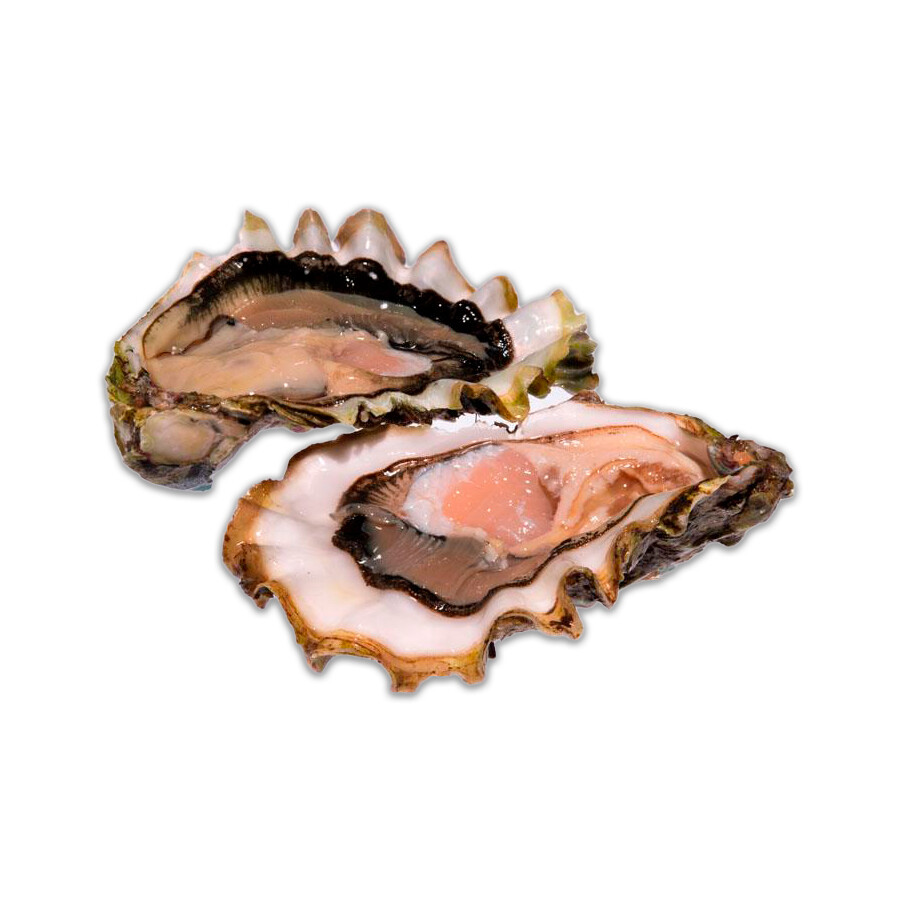 Khasan oysters are considered the most beautiful of those in the Far East, but they are also difficult to find. The mollusk likes to live deep underwater near the base of rocks, where there are fast currents.

They are gathered by divers in Amur Bay and Peter the Great Gulf, near the settlement of Khasan (hence the name) not far from Vladivostok. They have wavy shells because of the strong sea currents.

The color of their shells ranges from snow-white to dark-olive. The flesh is creamy in color. They have an average weight of 100-200 grams but some can weigh almost 400 grams.

How to eat: This variety of oyster has a strong flavor of the sea and is reminiscent of cucumber - it even crunches like a cucumber if bitten. It is recommended to be eaten raw, without cooking. 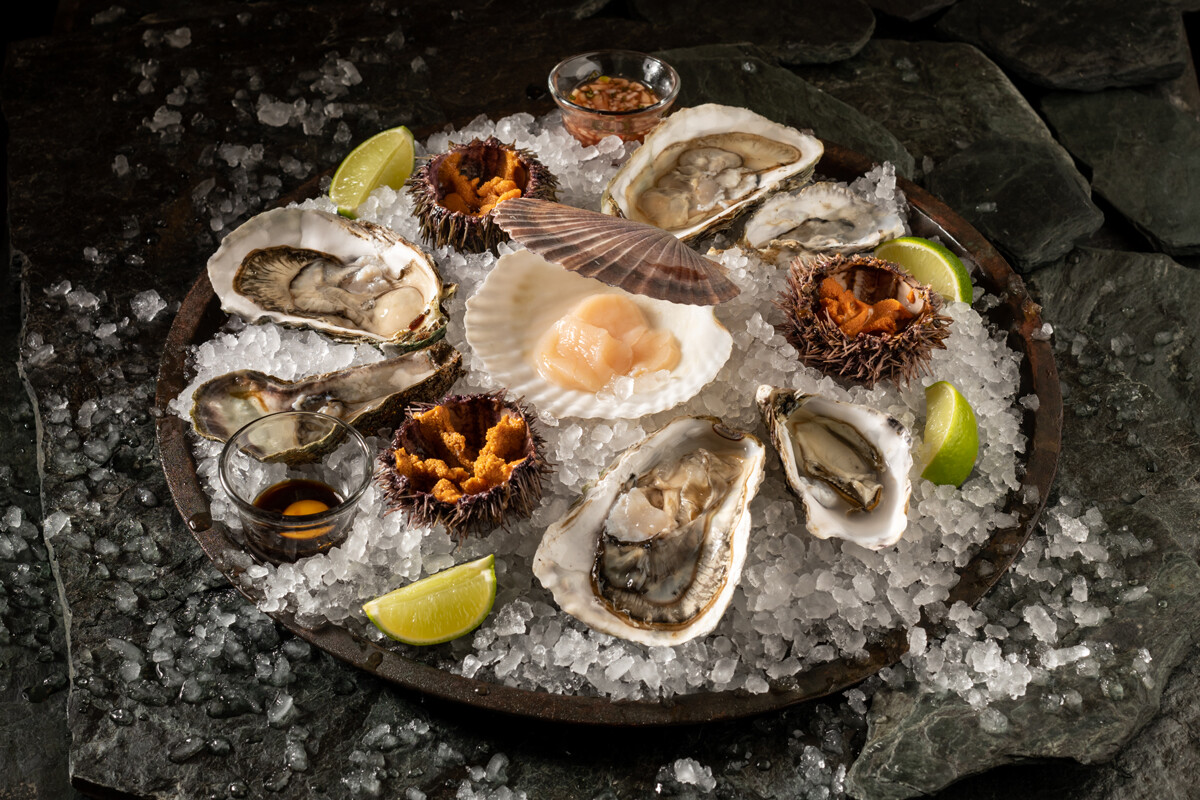 Their shell is slightly flattened and non-wavy in form. This is entirely due to the fact that they live in shallow bays with weak circulation of currents.

They have brittle and lightweight beige shells, and are simpler to open than many others. Their average weight is 150 grams. They are saltier than their cousins, and their flavor has a subtle sweetish quality.

How to eat: A good accompaniment to Emperor oysters would be a sauce made of dry white wine, shallots, basil and parmesan cheese. Or they can be paired with citrus liqueurs.

3. Romarinka oysters - the most succulent 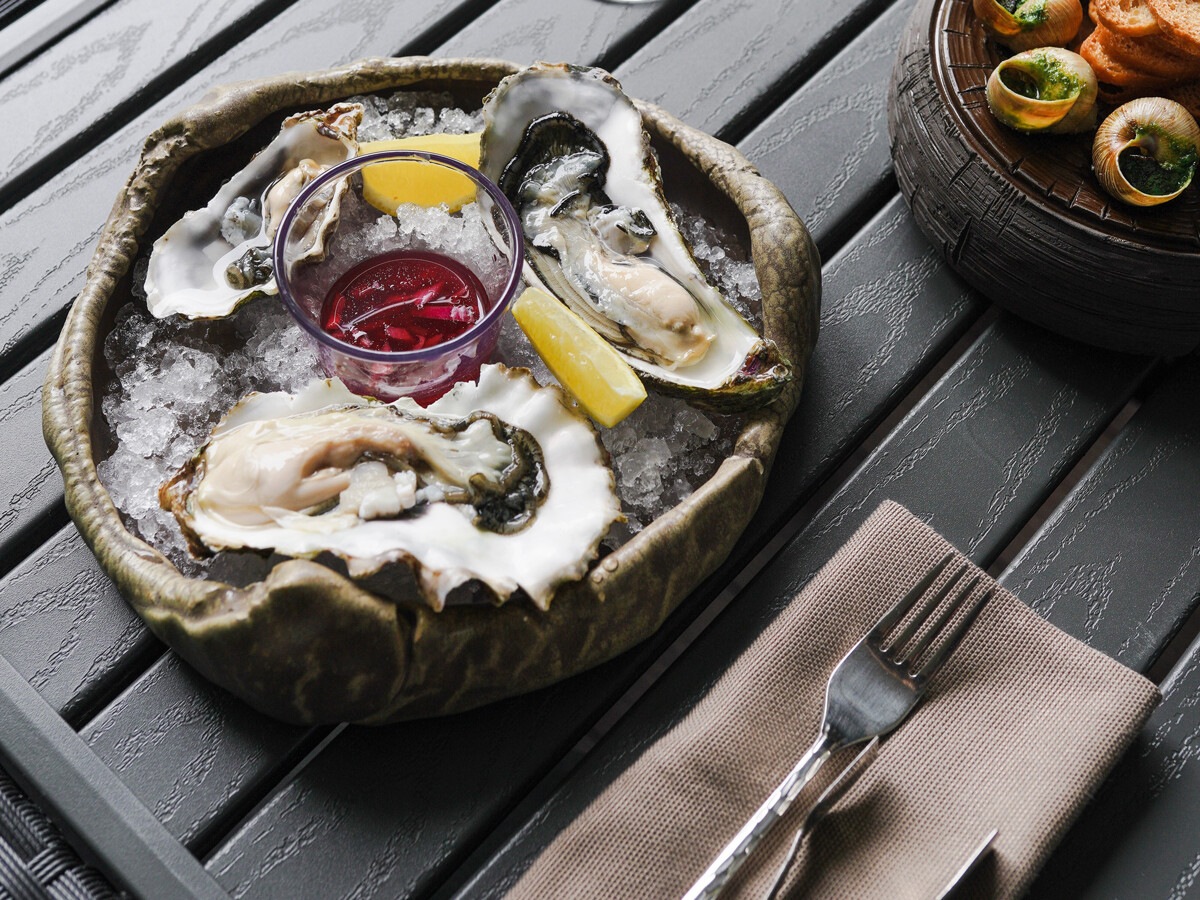 Romarinka oysters are gathered by divers in Amur Bay. They are hybrids of the Emperor and Khasan varieties. Their upper shell is wavy, but they have a flat lower shell.

Weighing 150-200 grams, they have the best ratio of edible weight to shell weight (around 15%). In taste, they’re similar to Khasan oysters. Gourmets can also detect nutty and creamy notes in their flavor and a slight aftertaste of the sea.

How to eat: Eaten raw, this juicy and meaty oyster variety goes well with lemon or soy sauce. White wine or champagne would be a good way of washing it down. Its flesh can also be cooked and used as the main ingredient in salads and soups. 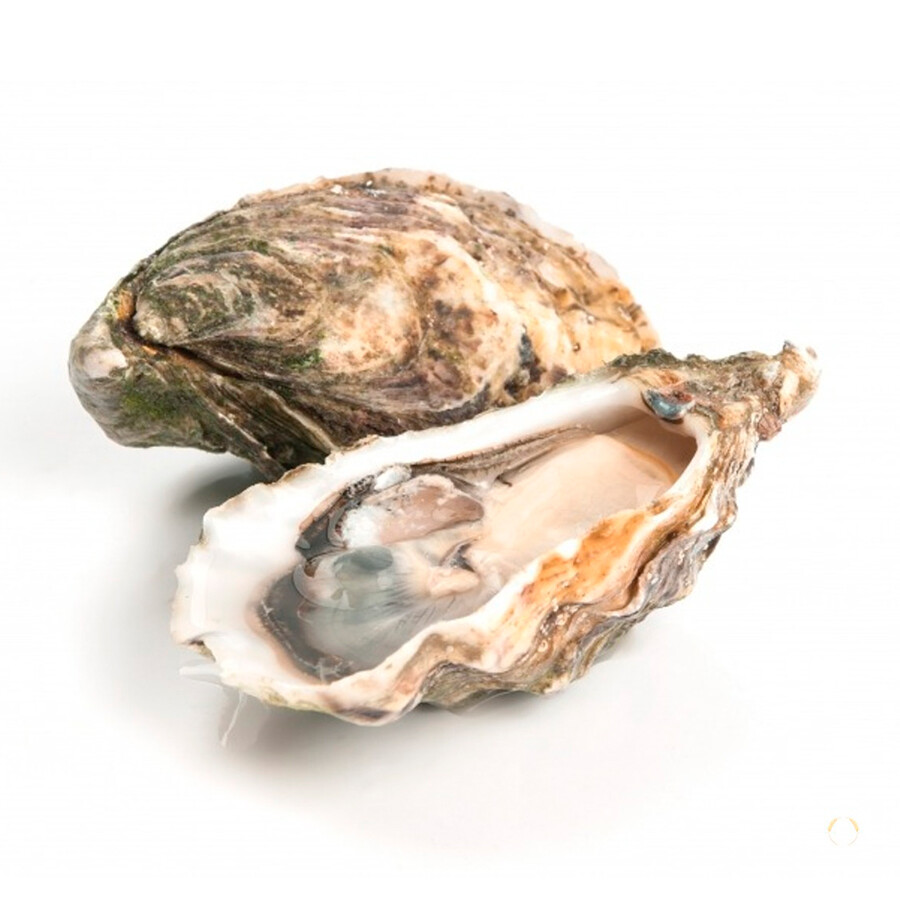 These wild oysters are fished by divers in an ecologically clean area not far from the village of Solovyovka in Aniva Bay off the island of Sakhalin in the Sea of Japan. And that is why they’re known as Solovyovka, Aniva Bay or Sakhalin oysters. Because of their elongated shape, they look like a boat and have a greenish tinge, which derives from the fact that they live alongside aquatic plants. They weigh up to 200-300 grams. Japanese tourists visiting Sakhalin don't miss the chance to buy this variety of oyster.

How to eat: This is a salty oyster, so strong liquors or vodka go well with it. 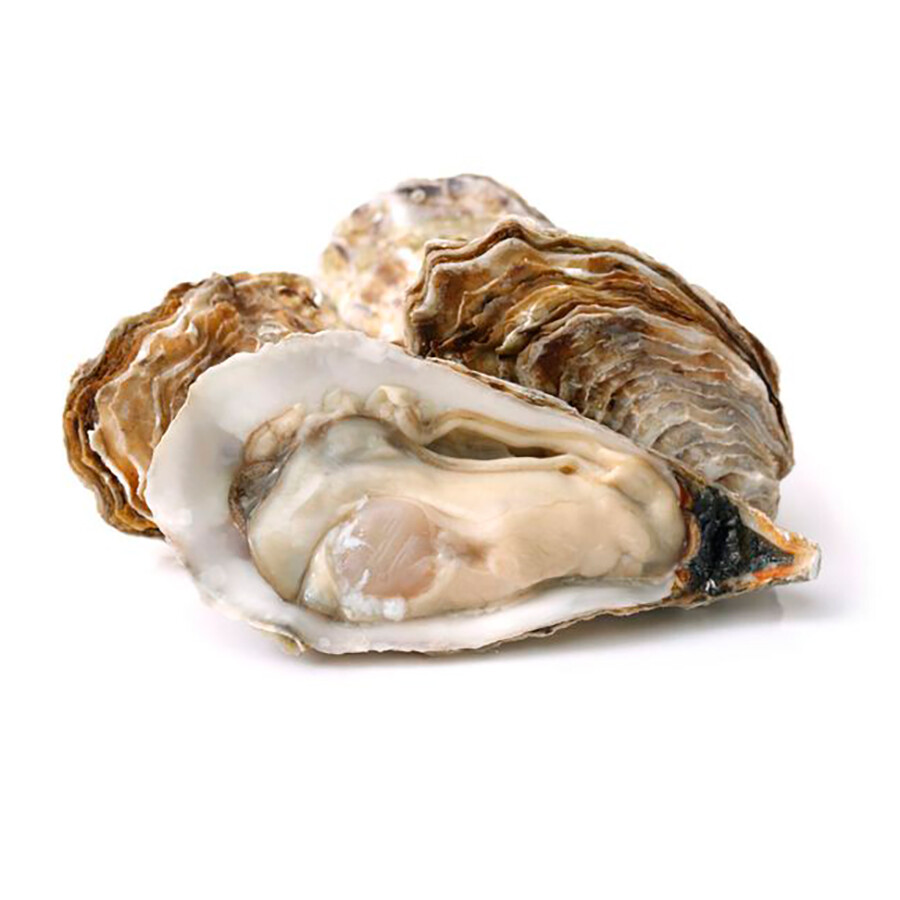 Poseta Bay oysters are classified as giant oysters. They have an average weight of 600 grams and a shell length of 25 cm, while particularly large examples can weigh 1.5 kg. They live in the southwestern part of the Sea of Japan on underwater sea knolls, the lower parts of which stand deep in silt. In appearance, they resemble ordinary rocks, so only professionals can spot them under the water.

How to eat: They have very tender flesh and a sweetish taste. Lager-type beer or a dry white wine goes well with them.