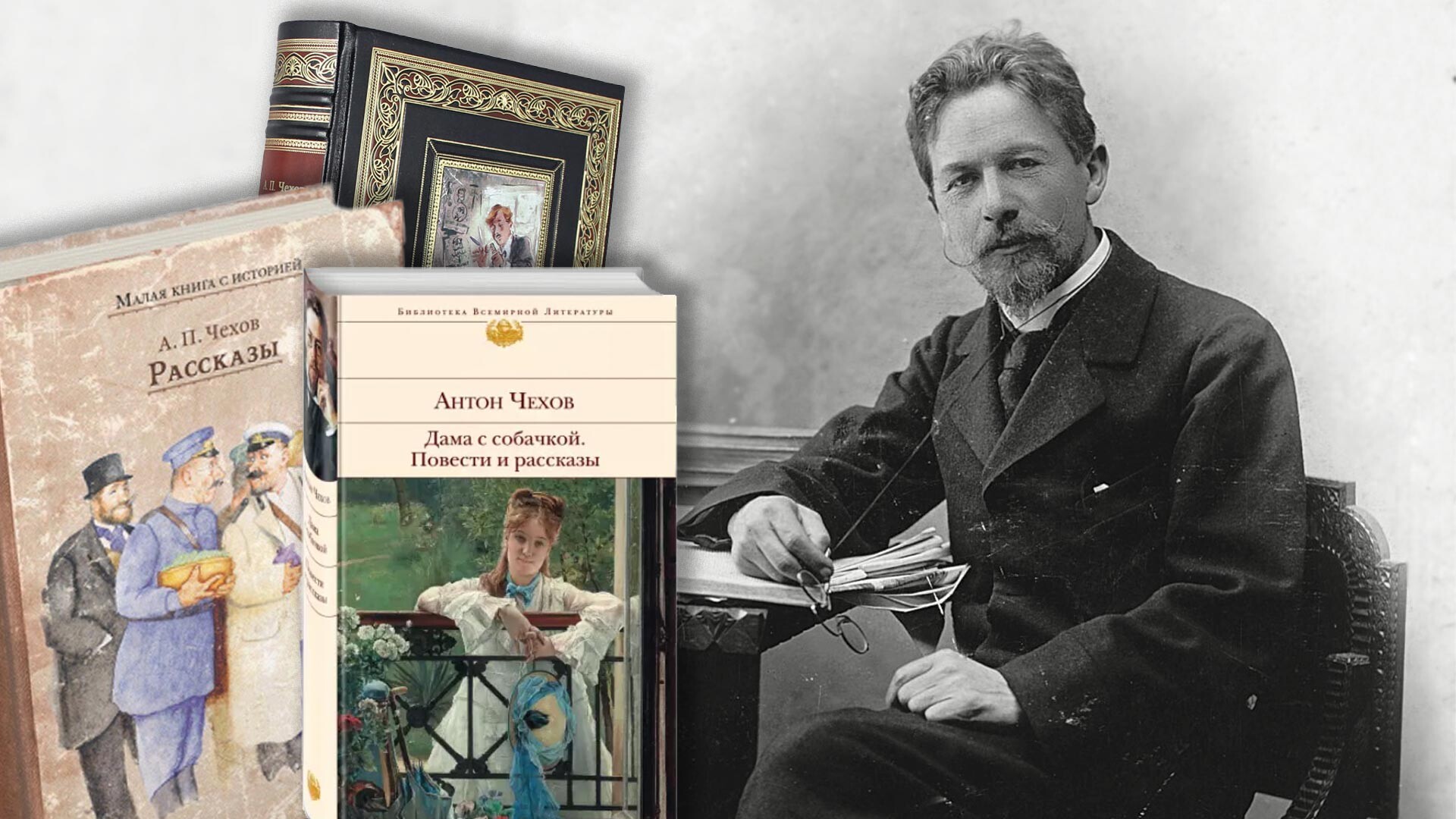 Russia Beyond (Photo: Public Domain)
If you don’t have time to read all his stories, here’s a choice selection of the author who coined the aphorism, “Brevity is the sister of talent.”

Chekhov wrote more than 500 short stories, which, in terms of depth and artistry, rival the great novels of other writers. He was the first to focus not on overblown drama, but on everyday life. The characters in his stories often dissolve into routine and circumstances, displaying no aspirations of their own. Contemporaries loved it: these were real people. Chekhov did not judge them, did not denounce them, but rather fixed them with the gaze of a detached observer.

Maxim Gorky wrote to Chekhov that no one could equal him when it came to writing about the simple things. "After reading even your most insignificant story, everything else seems crude, written not with a pen, but with a log."

Here are ten of the master storyteller’s must-reads. 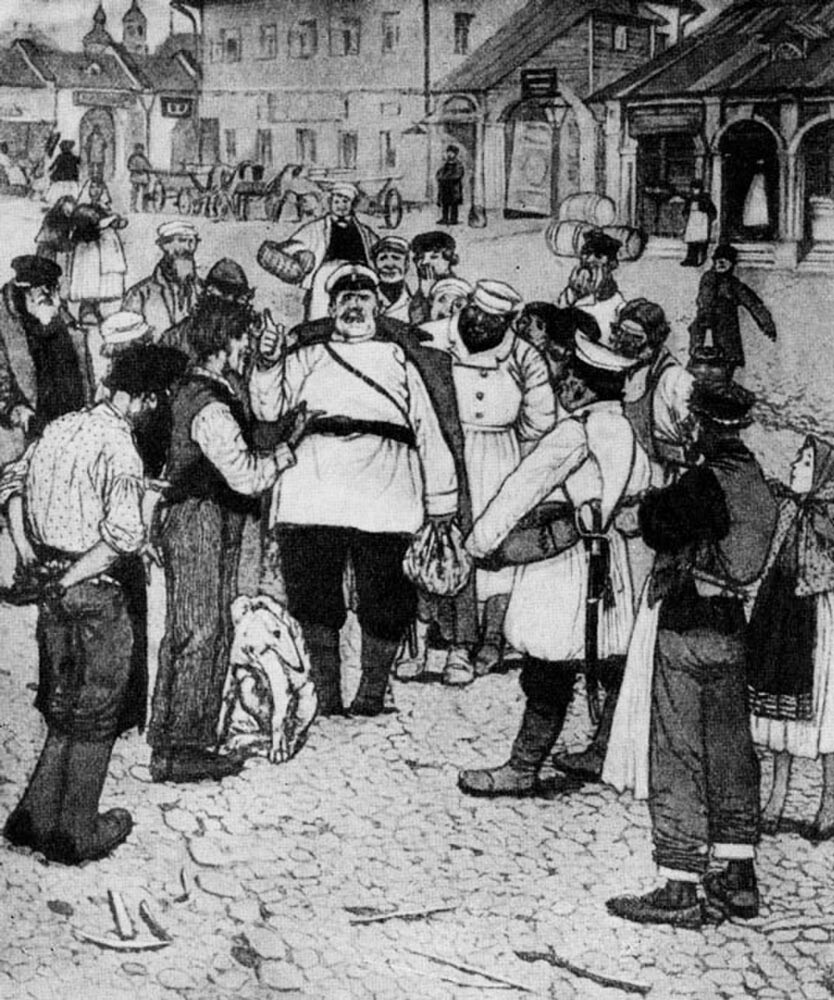 Illustration for 'The Chameleon'

A minor episode occurs on the market square of the city of N: a dog bites the finger of the goldsmith Khryukin and kicks up a fuss. Police inspector Ochumelov arrives to sort out the issue. At first, the inspector exclaims that the animal should be put down and its owner fined. But when he learns that the dog belongs to a general, his opinion changes. All of a sudden, Khryukin is to blame for provoking the animal.

It transpires, however, that it might not be the general’s dog after all, in which case it should definitely be put to sleep…

One of Chekhov’s first stories, read by all schoolchildren, it is a humorous critique of how people’s attitudes change chameleon-like, depending on who they are dealing with: a high-placed official or a nobody. 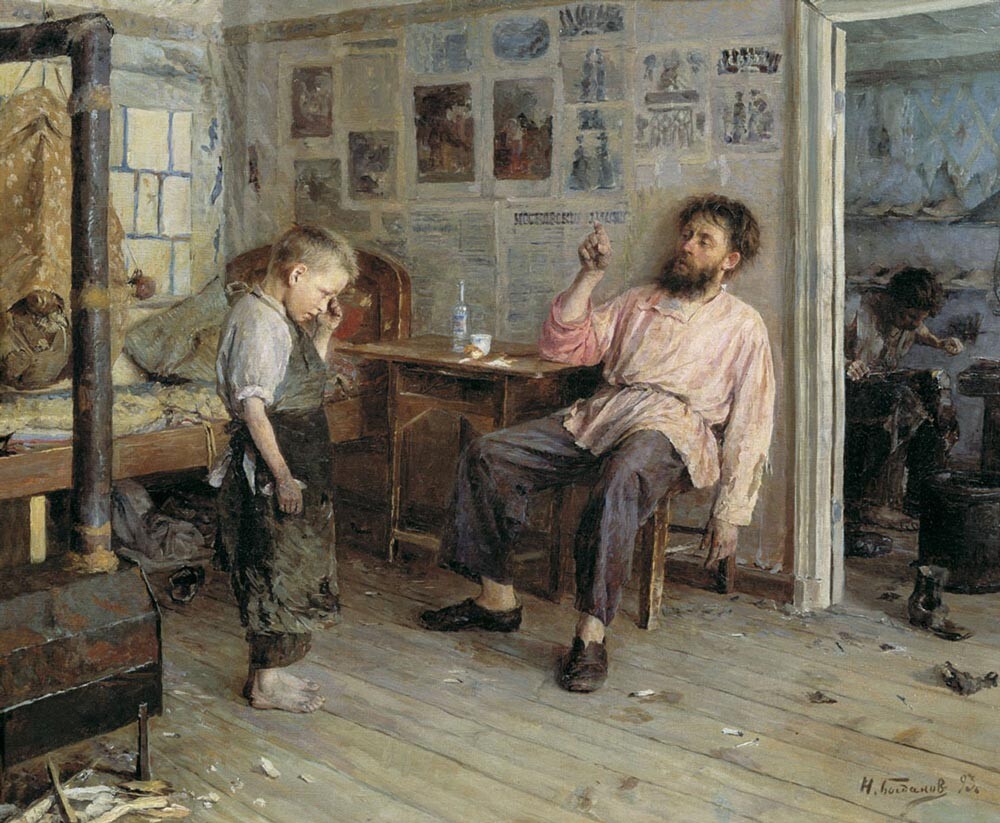 Nine-year-old Vanka, already a shoemaker’s apprentice, has no father or mother. The night before Christmas, when everyone has gone to mass, he takes out a crumpled sheet of paper and begins to write a letter to his grandfather. The boy describes how badly the shoemaker treats him, how poorly he is fed, how he gets beaten even for trivial offenses, and how the other apprentices mock him. The boy asks his grandfather to come and take him away, promising to be obedient and help him with everything. “I want to run away to the village, but I don’t have boots, I’m afraid of the cold.”

Do you believe in Christmas miracles? Neither does Chekhov. Not knowing his grandfather’s address, the boy writes on the envelope: “To Grandpa’s village.” This phrase in Russian has become proverbial, meaning a fruitless effort to make contact with someone. 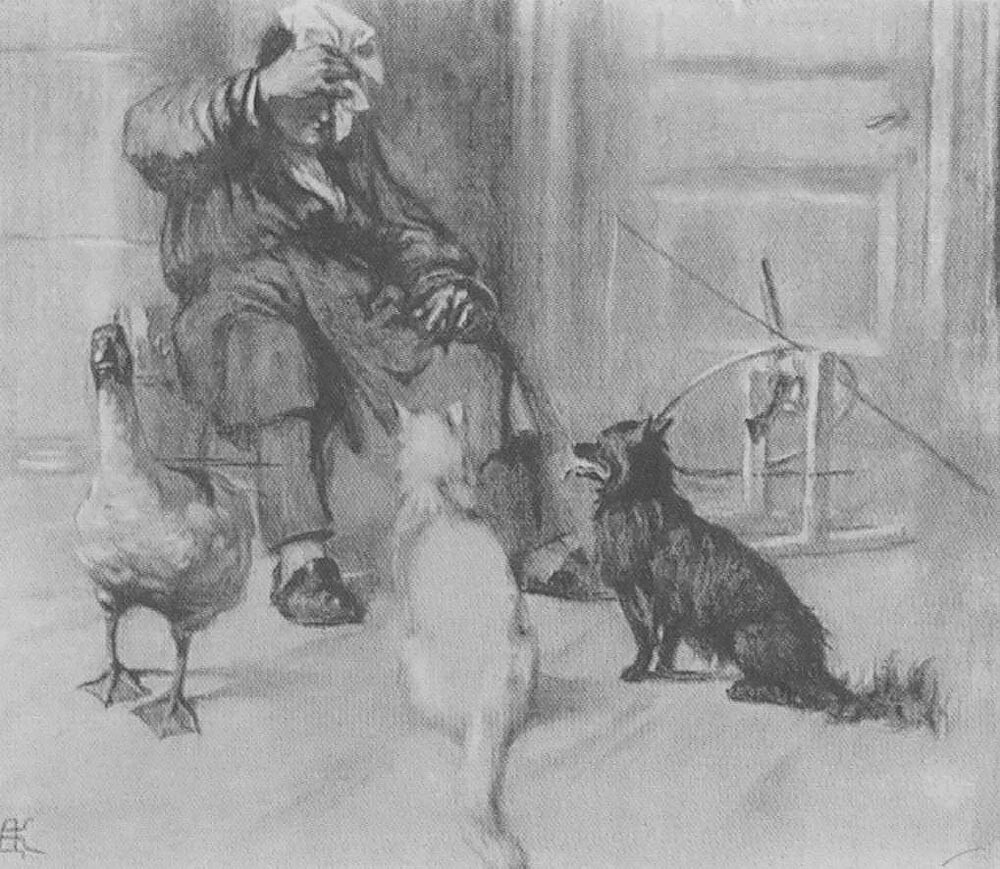 A small dog, a cross between a dachshund and a mongrel is lost, after her owner got drunk and wandered off. A passing stranger takes pity on her, takes her home, feeds her and decides to keep her, naming her Kashtanka. The new owner turns out to be a circus performer and makes the dog part of the show. During her debut, someone calls her by her old name – her former owner is there in the audience.

Chekhov humanizes the dog and her thoughts, endowing her with feelings and a sense of loyalty that puts humans to shame. She is attached to her old master, and even now, having found a more loving home, she is sad and fondly recalls the torment she suffered at his son’s hands. She will never exchange her owner for warmth, comfort and circus thrills. So when he calls her name, she immediately runs to him. 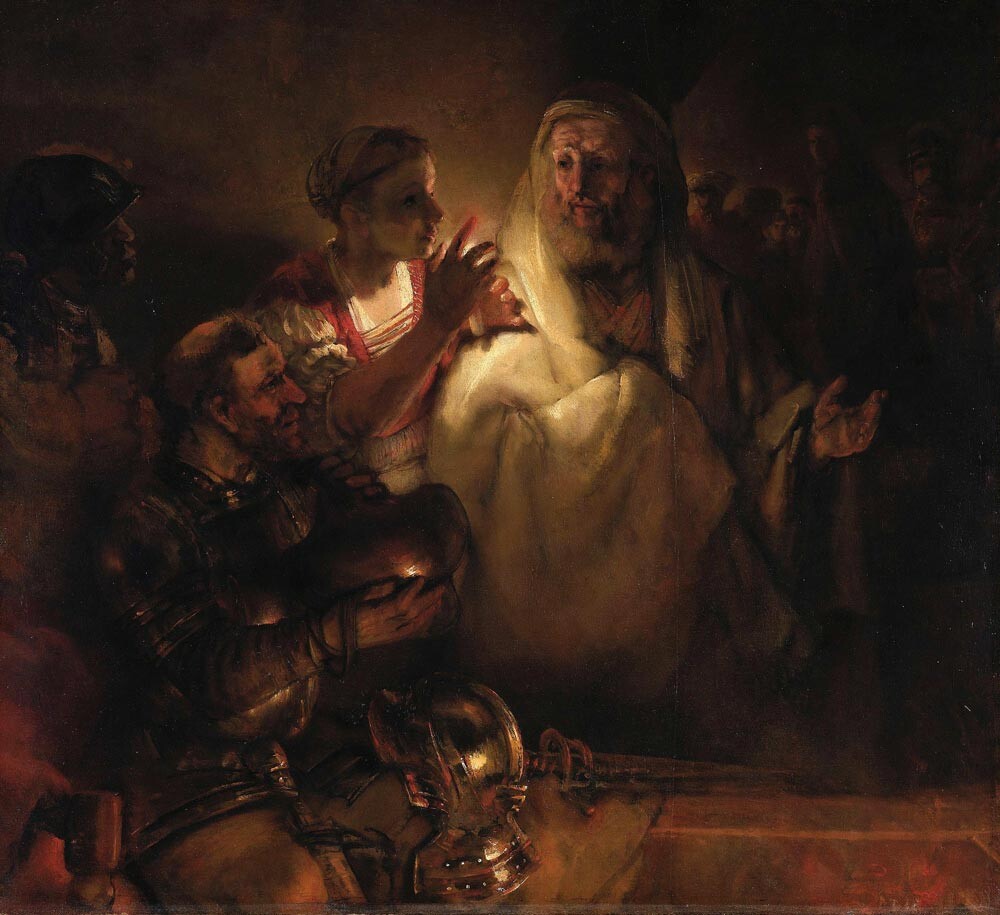 Rembrandt. The Denial of Saint Peter, 1660

When a student of the Theological Academy is walking home, the cold sets in abruptly and a strong wind begins to blow. In a gloomy mood, he starts to imagine how the bitter wind must have blown at the time of Rurik and Peter the Great, and has been blowing for a thousand years, during which time nothing has changed, the same poverty, longing and ignorance still abound. On the way, the student encounters two widowed peasant women from his village: a mother and daughter. Out of boredom, he begins to retell them the biblical story of Peter’s denial of Christ and suggests that it must have been a similarly cold and awful night. The mother weeps at his words. And the student realizes that she truly empathizes with Peter’s anguish, and the tale resonates with her despite the passing of centuries…

In the course of this (very) short story, the student undergoes an incredible transformation. Reading the Gospel and church books is boring for him, and it is only through meeting real people and understanding their experiences that the meaning of life can be glimpsed. 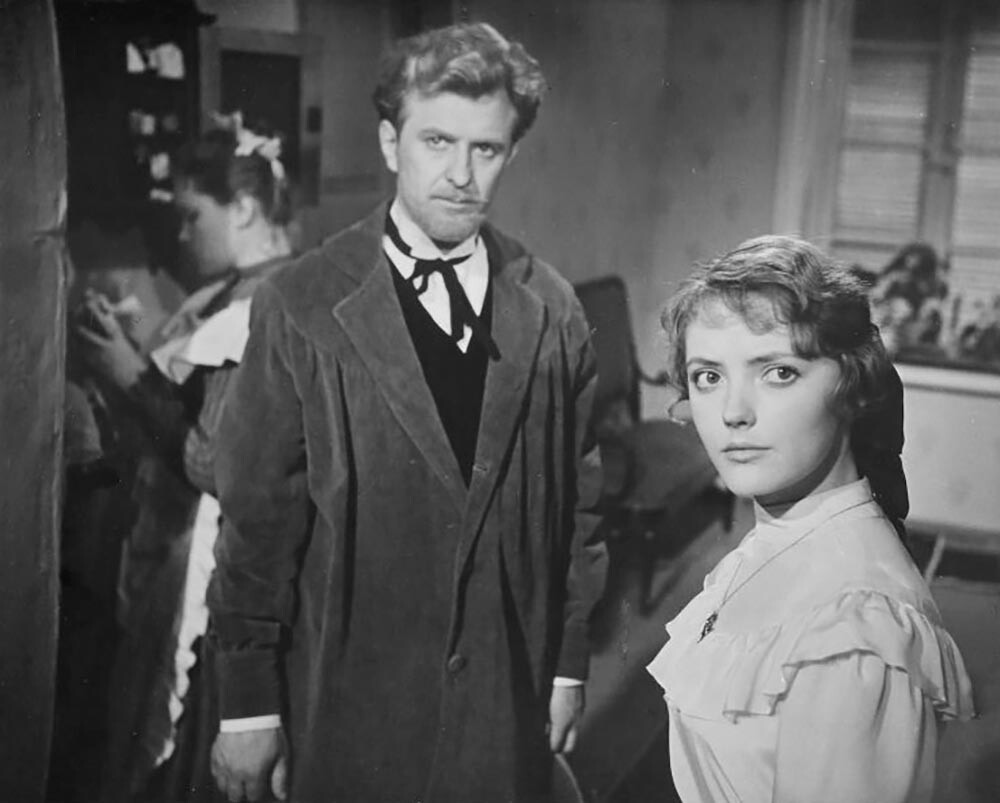 A still from 'The House with the Mezzanine' movie

The story is told from the viewpoint of an artist who leads an idle life, whose only interests are walking and drinking tea. One day he meets a widow with two daughters, who live next door in a house with a mezzanine. The younger sister, youthful and dreamy, admires the artist’s paintings, and he falls in love with her. The elder sibling is the complete opposite. She is very industrious, works at a school, teaches peasant children, tries to set up a medical center for peasants… Her hands-on attitude gets under the artist's skin.

In the story, Chekhov pits two natures against each other. One belongs to an active, broad-minded person who considers it important to help people, even with minor things (which Chekhov himself believed in; as a doctor, he treated sick peasants for free at his estate). The other is the philosopher type who believes that global change is needed, and until that happens, nothing is worth doing. 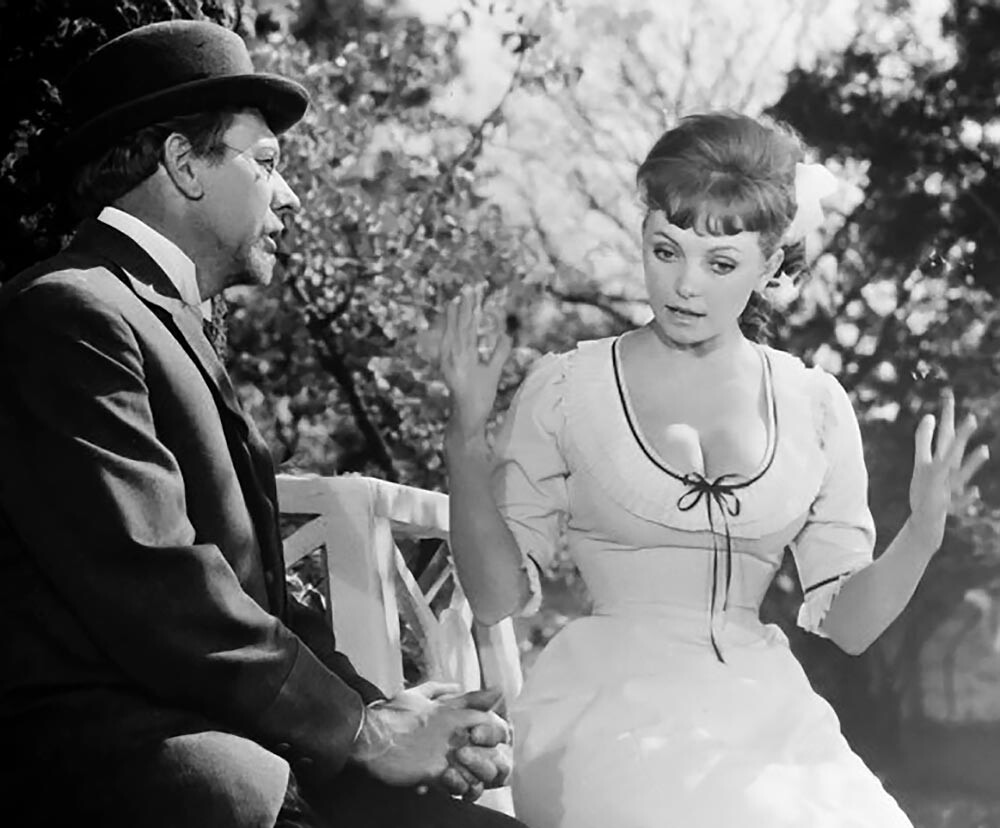 A still from 'In S. City' movie based on 'Ionych' short story

A young doctor, Dmitry Ionovich (“Ionych” for short), arrives in a provincial town on a noble mission: to treat peasants for next to no payment. His only entertainment is visiting the Turkin family in the evenings. They put on performances, and their daughter Katya plays the piano. The doctor falls in love and proposes, but she turns him down because she aspires to a "higher, brilliant goal."

Over the years, the doctor grows stout and flabby, more down-to-earth. The Turkins’ home performances no longer interest him, unlike money and domestic comfort… He stops taking walks and instead goes horse-riding (such detail is very important to Chekhov). What will happen when he meets his Katya again?

Here, Chekhov paints his favorite theme: how people with dreams morph into philistines, how they become consumed by everyday life. 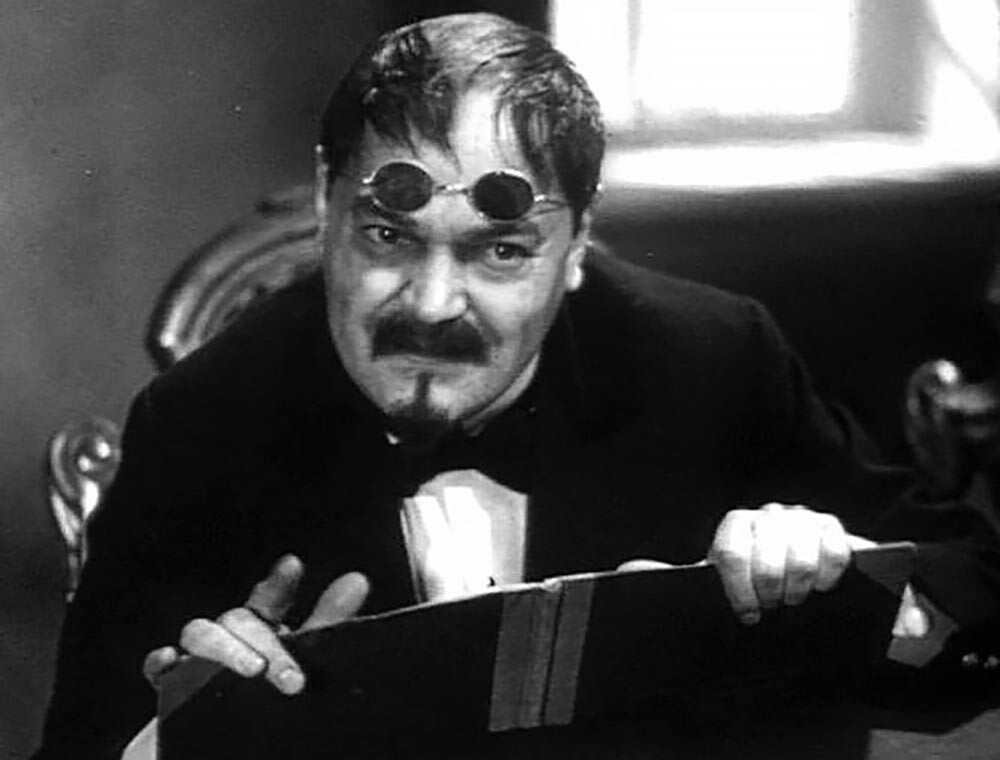 Even in warm weather, Belikov wears a coat and carries an umbrella in a case. In fact, all his possessions have their own personal case. He hides his face behind his collar. Suspicious and paranoid, he craves order and neatness in everything. Only in his coffin does he wear an almost cheerful expression on his face: “At last, they placed him in a case that he will never leave.”

Chekhov depicts a lonely figure who seeks to retreat from the whole world into his own shell. And his life is invisible, so empty and meaningless that no one sheds a tear when he passes away...

In Russian, the phrase “man in a case” has become an idiom with a negative connotation, said about people who are afraid to open up to the world and lose many opportunities by never leaving their comfort zone. 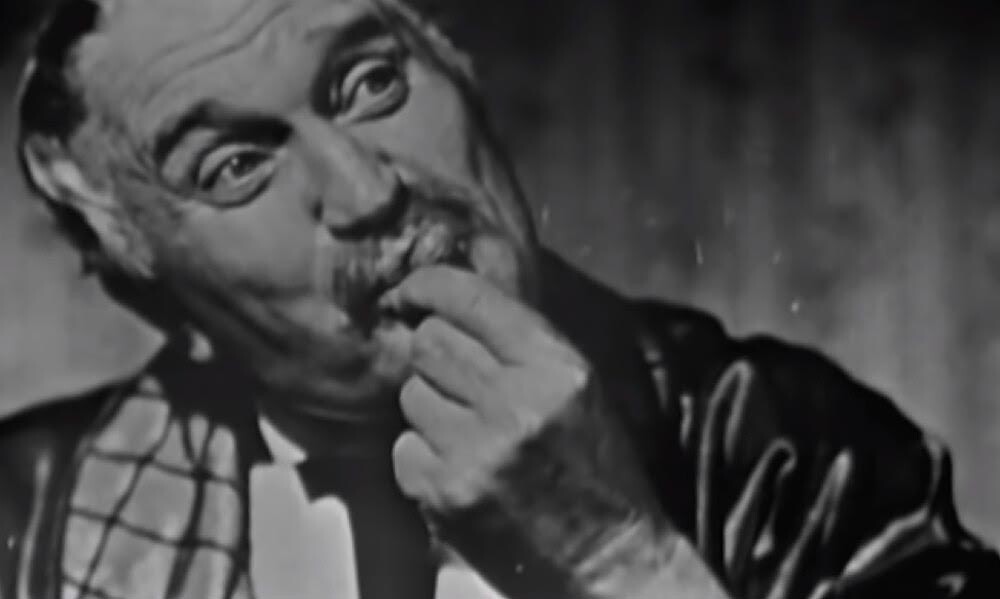 A still from 'Gooseberries' TV film

The protagonist, a government official, dreams of living outside the city and buying an estate where there will definitely be a gooseberry bush. He scrimps on everything, saving every last penny. He even marries for money, but his parsimony drives his wife to an early grave. Years later, his dream finally comes true: our hero becomes a country gent with an estate, where he eats gooseberries to his heart’s content.

The story is linked to Man in a Case through the narrator and the general theme of excessive self-centeredness, and constitutes an important discourse on the nature of human happiness. 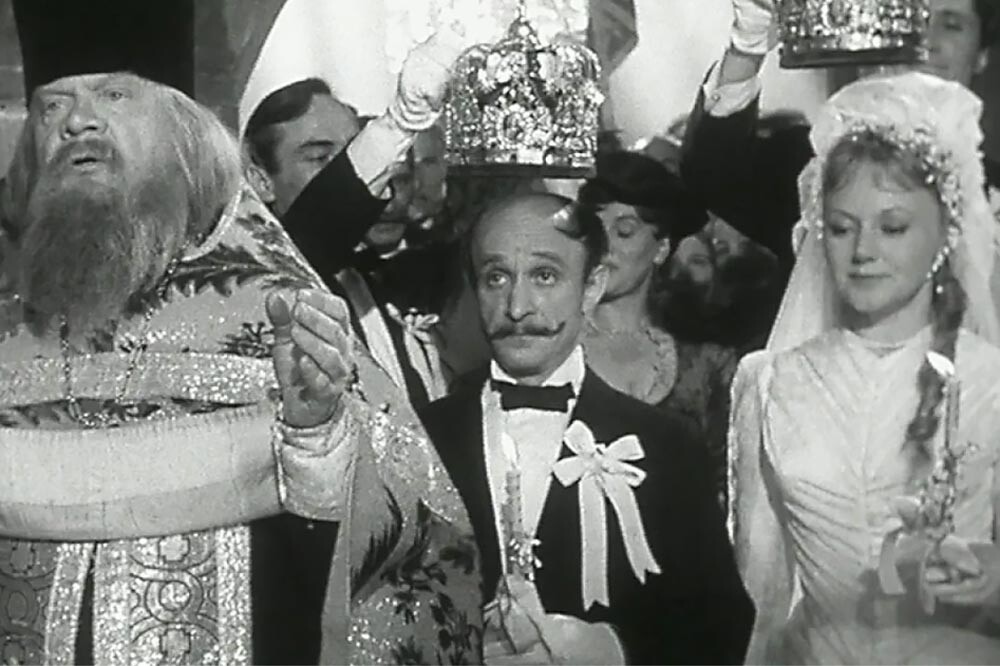 A still from 'The Darling' movie

Olenka is so meek that everyone calls her dushechka (“little soul” or “darling”). She is totally absorbed in the affairs and concerns of her husbands (who die or disappear in quick succession): a theater impresario, a timber merchant, a veterinarian… She is not only a devoted wife, but a competent assistant; even her vocabulary changes depending on the interests of her spouse.

This is one of the most important works about the female nature and the role of women. In late 19th-century Russia, they were no longer seen as just mothers and wives – society demanded that they be educated, work and contribute to the social order. Chekhov contemplates this new role, without delivering a verdict. 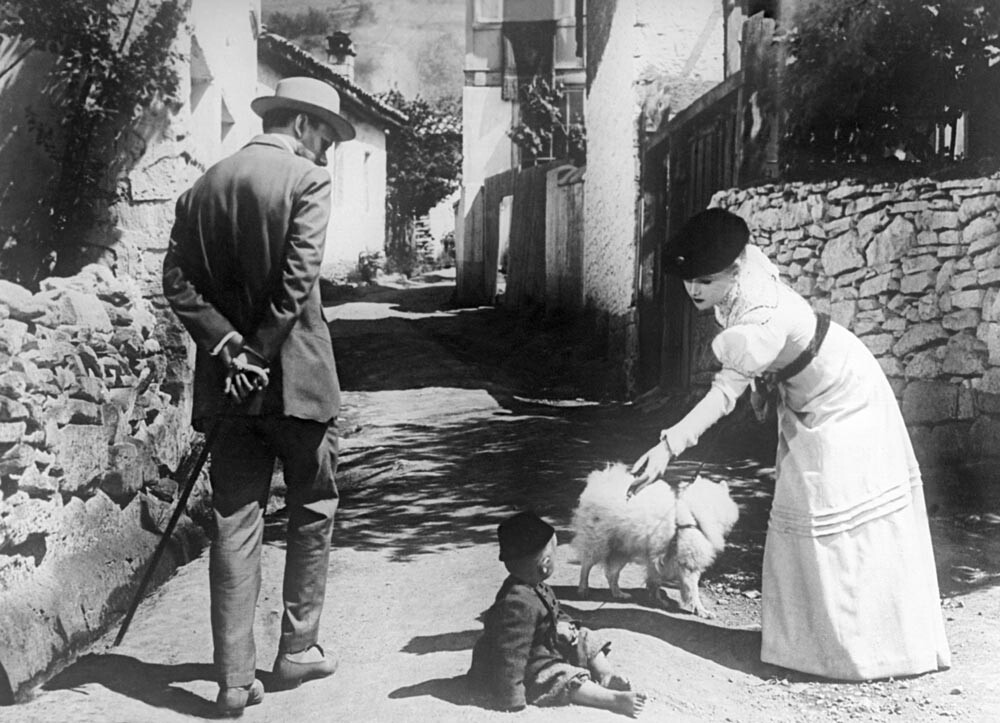 Two unhappily married people meet on vacation in Crimea and start a holiday romance. When it is time to leave, they return to their families, but continue to yearn for each other. Realizing that they have found true love, they began to meet in secret and dream of a future together…

The story has been filmed multiple times, providing ample room for interpretation. Chekhov once again writes not about individuals seeking and struggling for happiness, but about surrendering oneself to life’s inexorable flow.