Russia is developing the first amphibious tank with wheels 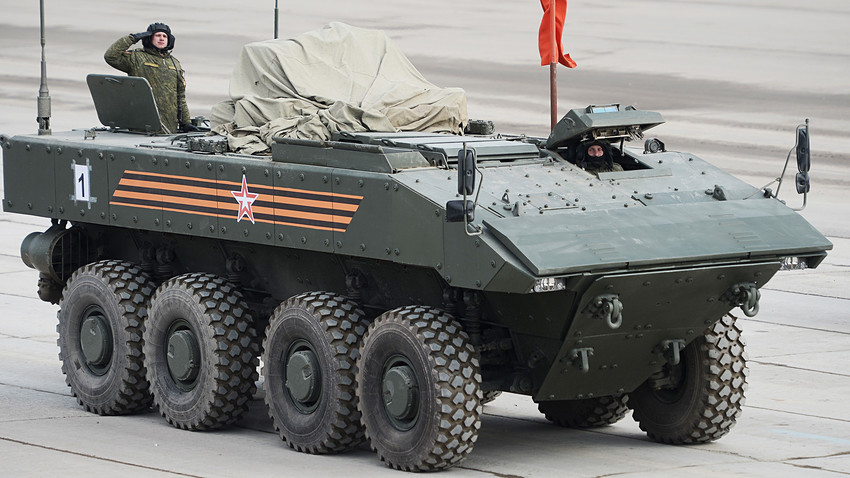 Ramil Sitdikov/Sputnik
The new vehicle will be based on a light armored personnel carrier and will be equipped with a 125 mm gun from the Armata tank, but experts are worried about the project.

Alexander Krasovitsky, CEO of Russia's Military Industrial Company (VPK), said on central television on March 4 that work is underway on a new light amphibious tank, which has not yet been given a name.

The project currently has a "tentative" status - the Defense Ministry will receive a trial consignment for tests and only then decide whether to launch production of these vehicles or to shelve the project altogether.

Does Russia need the new tank?

The new tank will be based on the latest armored personnel carrier (APC), displayed to the world for the first time during the Victory Parade on Red Square on May 9, 2015.

The new tank will be equipped with a 125 mm gun and will be able to move through water thanks to water jet engines capable of powering the multi-ton vehicle to speeds of 12 km/h.

But Vladimir Yevseyev, a military expert and deputy director of the Institute of CIS Countries, doubts that the project is realizable, or that the Russian army even needs such hardware.

"In early 2010 we tested Italian Centauro light tanks which also have this type of wheeled chassis. But equipment suitable for Europe with its excellent roads and flat landscapes is completely unsuitable for our country," he said.

These vehicles have problems with balancing, he points out. For instance, the Italian tank fell on its side several times during the tests on Russian ranges because of its heavy gun. According to TASS military expert Viktor Litovkin, such vehicles are ideal for European armies since the wheeled chassis enables them to easily and quickly outdistance heavy guns on good roads.

"Moving such vehicles around ideal roads is much easier than loading classic tanks onto a trailer or railway train and carrying them thousands of kilometers. It’s twice as expensive and takes more time," the expert explained.

In any case, the final decision on whether to put the project into series production lies with the Defense Ministry, to which the new tank is still to be presented.

"The Terminator-2 infantry support fighting vehicle, which is currently being lauded in all Russian and foreign media, spent 20 years in the workshops of Uralvagonzavod before the company managed to persuade the military of its usefulness and indeed indispensability in modern fighting conditions. For some reason everyone believed that only missiles would be needed in future wars," a military source told Russia Beyond.

What the predecessor of the new tank was like

The , on the basis of which the new wheeled tank is being developed, replaced the "oldies" of the Russian infantry: The BTR-80 armored personnel carrier and its modified version, the BTR-82. The latter was criticized by the military for the vehicle’s poor floor protection.

"That drawback had to be eliminated, so the new received a multilayer armor with ceramic elements, similar to some tank armor. The APC itself is significantly larger than preceding models - the space for the crew has been increased," the source said.

In addition to new generation armor, the key difference between Bumerang and Soviet models is its modular design.

"It means that one turret can be easily replaced with another one with a different armament, depending on specific combat tasks and conditions. At the same time the armored vehicle’s turret is now unmanned and remotely controlled, which makes it possible to considerably increase the crew's safety," the source added.

A standard 7.62 mm army machine gun with a supply of 2,000 rounds of ammunition is located in the turret itself, as well as the Kornet missile system with automatic guidance.