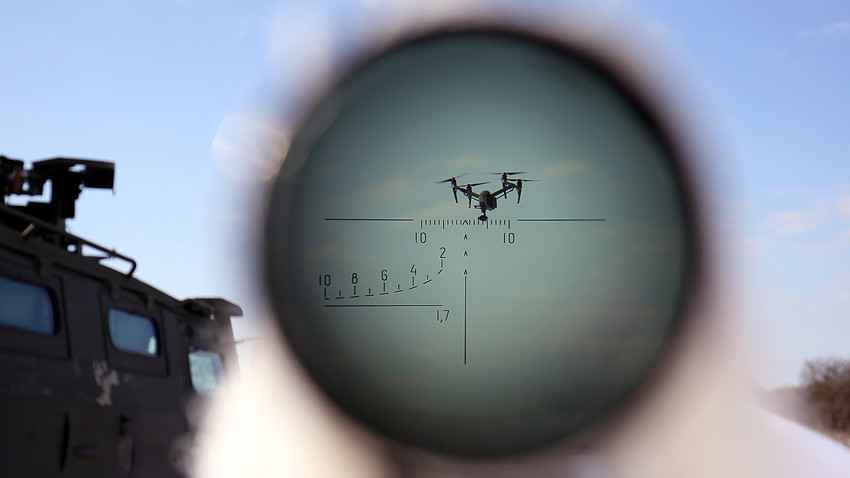 A special task force serviceman during a drill on fighting air targets in the Stavropol Territory.

Russia enterprise Automatica Concern has presented new electromagnet weapons that will be tested in Syria alongside new Kalashnikov guns. These novel weapons are divided into small, medium and large versions depending on the type of aerial targets they’re intended for. Yet their main focus is on UAVs (unmanned aerial vehicles) swarming Syrian skies.

The smallest gun is dubbed “.” It’s a portable electromagnet rifle designed to jam Wi-Fi and GPS signals emanating from ISIS terrorists using drones to reconnoiter the lie of the land. It is capable of knocking out the enemy at a distance of up to half a kilometer, thwarting units of fighters by completely blocking their view.

Meanwhile, the gun’s electromagnetic field doesn’t affect the shooter as the side lobe irradiation (radiation going backward) is minimal and meets medical standards.

Further details are secret and will be unveiled during the Army-2018 military exhibition in Moscow’s suburbs this August, once battle tests are finished and results collected.

Yet it’s known that “” is an analog to the new Kalashnikov’s REX-1 electromagnet gun. They work on similar principles as they suppress the command and control channels of the world's most commonly encountered drones like GSM, GPS, GLONASS, and Galileo.

“With REX-1 it’s possible, in accordance with any specific aim and objective, to change the barrel and install the necessary component in a matter of seconds, just like changing the magazine on an assault rifle,” Nikita Khamitov, head of the special projects department at Zala Aero Group (Kalashnikov Concern's sister company) told Russia Beyond

Thanks to this, the operator saves on battery power. The gun is still capable of continuous fire for four hours. The user can then either recharge it for four hours using an ordinary 220-volt socket, or slot in an additional battery for uninterrupted use.

Drones will react differently to this sort of fire. Depending on the precise model, drones have two default modes in case communication is lost with the operator: They either return to the start point or automatically land.

Medium and large types of electromagnetic weapons created by Automatica Concern are dubbed the “Ram” and “Peregrine Falcon.” The latter one is the most powerful and is designed to combat all types of drones ranging from small reconnaissance machines to those armed with unguided bombs.

“Peregrine Falcon” detects UAVs via multichannel tracking systems in infrared, visual, radio, and radar spectrums at distances of around 100 km. It finds them, locks onto them on radars, and “turns them off.” But if these drones are carrying weapons and can’t be dealt with using electromagnetic spectrums, “Peregrine Falcon” sends their coordinates to aerial defense systems such as the “Pantsir-S1” that mashes them with 30mm rounds.

The stationary medium range anti-drone electromagnet weapon is called “Ram” and is especially effective against a massive UAV attack from several directions. When detected, it instantly "builds" an invincible electromagnet field around the base which is impervious to drones. Despite the wide range of frequencies, the radiation is absolutely harmless to people under the dome.

According to him, if Automatica electromagnet systems pass battle tests, they will be a good addition to the army’s air defense shield in Russia and other countries around the globe.