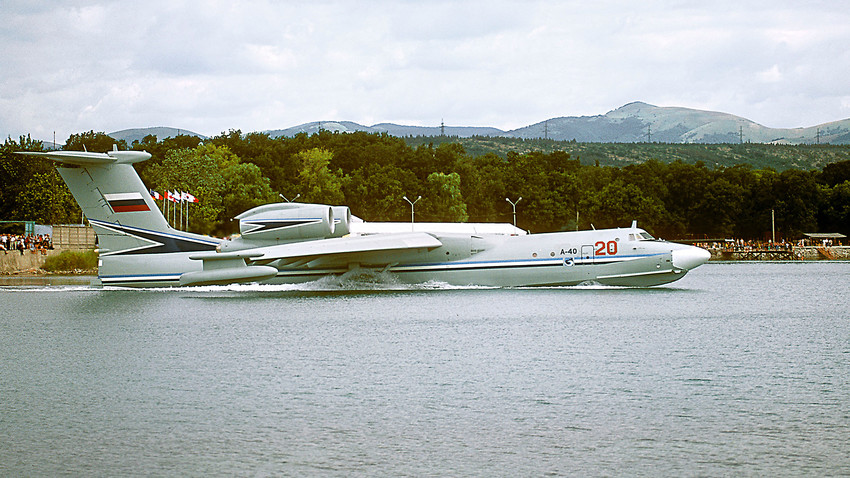 Vjacheslav Afonin/Sputnik
A new breed of giant seabird is set to patrol the Russian coast — armed with 6.5 tons of ammunition and state-of-the-art surveillance systems. Its mission: to locate and neutralize uninvited guests lurking below the brine.

Plans are afoot to resurrect the Soviet A-40 Albatross (NATO reporting name: Mermaid) and return it to the ranks of the Russian military by the early 2020s. This will be done to meet Russia’s naval aviation requirement for a new aerial workhorse able to patrol the country’s endless coastline if called upon, detect and destroy enemy submarines.

The A-40 is an amphibian aircraft, which means it can touch down and take off from any water surface. It earned the nickname “Albatross” for its autonomy and ability to practically live at sea, returning to shore only occasionally (unlike seagulls, for instance).

...a Soviet-era amphibious aircraft designed to locate and eliminate enemy submarines, but never mass-produced due to the collapse of the USSR. Banal it may be, but 1990s Russia simply lacked the money and time for such “trivial” (by the standards of the day) matters as upgrading the naval aviation fleet.

Today, however, the fleet has the capacity to pack all kinds of modern wizardry into the belly of the Albatross, which has a wingspan of 40 meters and a top altitude of 13 kilometers. With a flight range of around 4000 kilometers, the A-40 can continuously reconnoiter the terrain below for 12 hours before having to return to base for refueling.

Moreover, this 90-ton bird will be fitted with two powerful D-30 engines, which will enable it to carry up to 6.5 tons of anti-submarine ammunition (for comparison, its predecessor could carry a mere 1.5 tons).

Not only that, it can be equipped with all kinds of sea-based weaponry, including traceless self-guided Orlan (Sea Eagle) torpedoes (capable of targeting both submarines and surface ships), anti-submarine missiles, depth charges, mines, search acoustic buoys, and special radio reconnaissance equipment.

The A-40 (civil version A-42) is also well suited for search-and-rescue operations many miles from shore. The vessel is so seaworthy that it can land and take off at a wave height of up to two meters. Back at the design stage, the designers envisaged installing a mid-air refueling system, significantly expanding the range of the aircraft. And although the Albatross is not officially designated as long-range, it has everything required for extended flights: toilet, wardrobe, and even a sleeping compartment.

Initially, there were myriad options for equipping and utilizing the future aircraft. At one point, talks were even held with British company Rolls-Royce on making engines to promote the model in the West.

In the end, however, the heads of the Russian Ministry of Defense and Ministry of Emergencies decided to place production in the hands of domestic enterprises to avoid being buffeted by the changing political winds.

In the words of Izvestia military correspondent Dmitry Safonov, this move helped the manufacturer sidestep the consequences of Western sanctions, but at the same time limited the options to sell the aircraft abroad.

“The decision to produce the BE-200CHS using only Russian components bars the aircraft from the Western market — the supply of spare parts will cost the buyer a pretty penny. The aircraft is slated for the domestic market and for countries in South-East Asia,” notes the expert.

He says that the ultimate carrying capacity of the vessel is 8000 kilograms and 12 cubic meters of water [12 tons — Ed.], carried in tanks for extinguishing fires.

“The main feature of the amphibian aircraft is its ability to scoop up water on landing, fill its tanks, and take off again. So Russia’s customers will be countries with wide rivers and reservoirs, since extinguishing fires with salt water would ruin the trees,” adds Safonov.