Moon diaries: How I came to love and hate the space treadmill

Science & Tech
Anastassia Stepanova
Press photo
This treadmill is a test of endurance for even the strongest and fittest of astronauts. So how did Anastasia Stepanova, who is taking part in an isolation experiment in preparation for a lunar mission, cope with it?

During isolation, you do not tend to experience either vivid emotions or deep feelings, since your very life conditions tune everything in your mind and body to an even, routine existence. After the first month of euphoria and heightened interest in everything, there begins a period of adaptation. A human being quickly gets used to extreme conditions and soon ceases to consider them as such.

But there is one inanimate object that does not give rest to many of my fellow crew members on our SIRIUS19 "mission to the moon". No matter how much time has passed, we still can’t get used to it. Love and hatred for it are separated by just a few minutes and a couple of increases in speed. The monster, the beast, the torturer, “what the doctor ordered” - each of us has his or her own nickname or swear word for the manual treadmill.

In ordinary life, this type of treadmill is rarely used. It doesn’t use electricity, motors, or a built-in computer. In a manual treadmill, the belt is set in motion by the action of your feet. It is like the cars in The Flintstones cartoon, which are powered by the feet of people inside them.

But on a manual treadmill, you don’t feel so much a caveperson as a hamster in a wheel. Our running could be used as a source of energy: all that was needed was to connect a power cable. We often joke that this is the ideal torture machine, and, as it turned out, there’s a great deal of truth in the joke.

The prototype for a treadmill was invented by English engineer William Cubitt in 1818, after he saw prison inmates idling away their time. He created the treadmill for idle convicts, who had to rotate a two-meter wheel with 24 blades, which acted as steps for the convicts to climb up for 6-10 hours on end. The machine could be used to grind grain, lift water from wells and even ventilate mines. Prison administrations immediately realized how useful the invention was: it put inmates' energy to use, at the same time diverting it from escape plans. 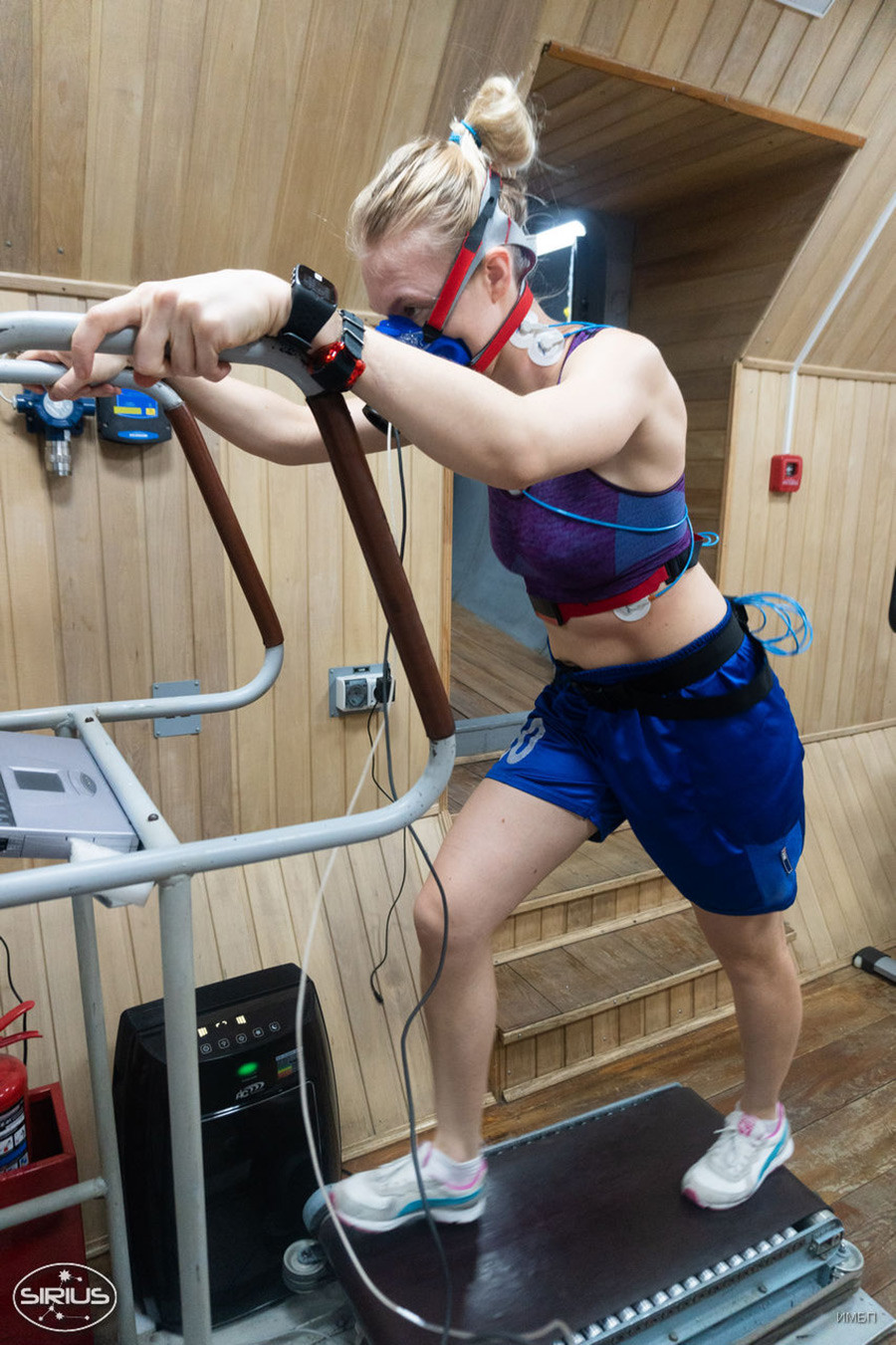 It was only in 1902 that the use of treadmills in prisons was finally abolished after being deemed as inhumane. A decade later, a jogging "training machine” was patented by C.L. Hagen, and wealthy people could get into prisoners' shoes, paying good money for the privilege. The modern equivalent of the treadmill was created by American cardiologist, Robert Bruce, and inventor of medical devices, Wayne Quinton.

The first treadmill for use on board the Salyut space station was created at the Institute of Aviation and Space Medicine in 1971. In our isolation experiment SIRIUS19 (conducted by IBMP and NASA), most of the workouts and endurance tests are carried out on a manual treadmill, which was created by IBMP's Special Design Bureau of Experimental Equipment (SKB EO) for the Buran program. It is the key to maintaining good health and work performance during a space flight.

In microgravity, after only two weeks, bones begin to lose calcium and leg muscles begin to atrophy. A manual treadmill is more effective than a motorized one since it targets those groups of muscles that would be used while walking or standing when on earth. 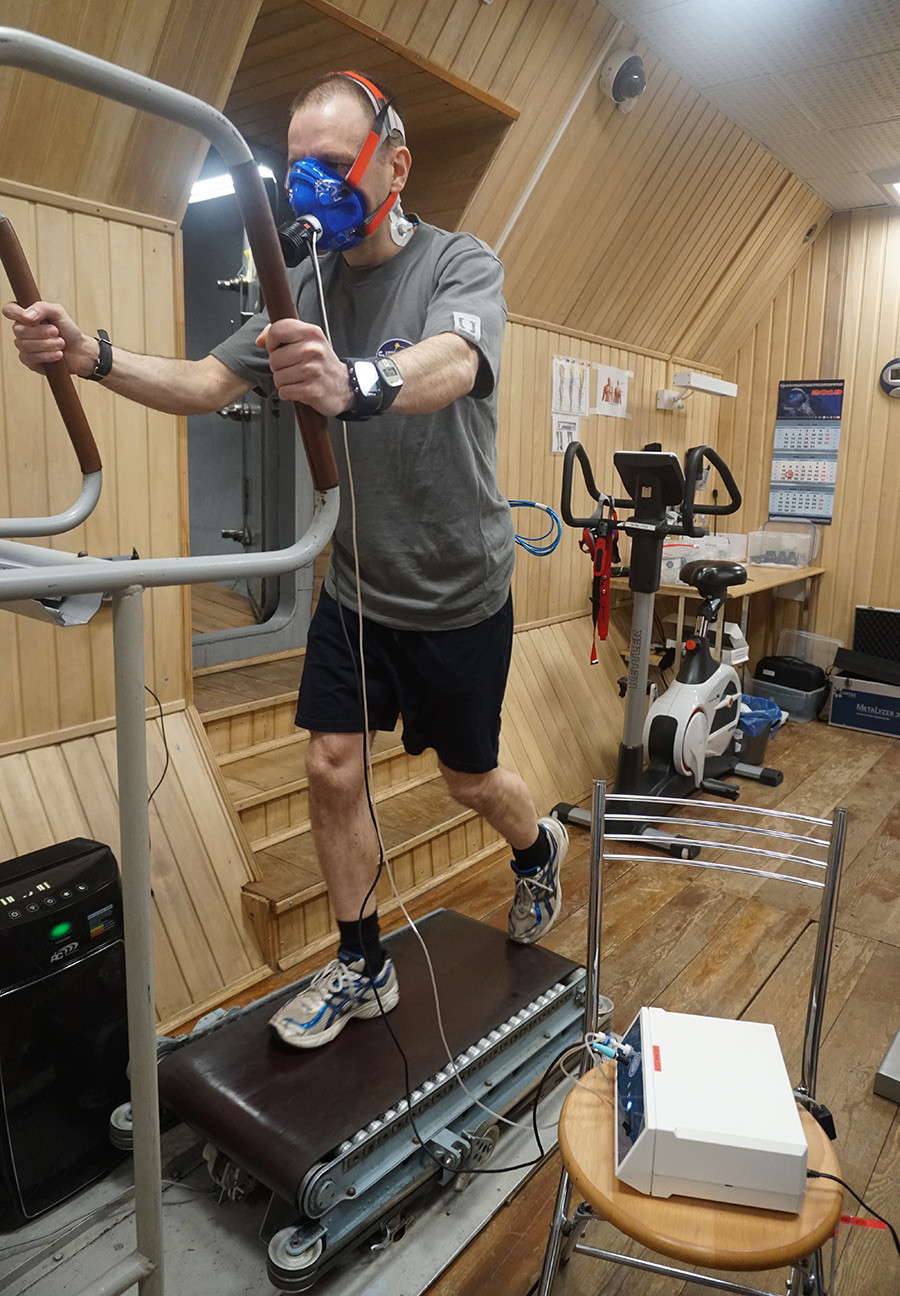 For real space flights, a BD-2 treadmill is used, which differs from our ground training model in that it has an unstable support. Its platform is fitted with a special vibration isolation system so that when the treadmill is in operation its weight is not transferred to the body of the station. Thus, astronauts have to run and balance at the same time due to the unstable support. In front of a person running, there is a small rectangular console that displays the running speed, distance covered, time and other data. The BD-2 can operate both in motorized and manual modes.

Our commander, cosmonaut Evgeni Tarelkin, explained: “You key in your weight, which should be 70 percent of your weight on earth, attach yourself with the straps of the loading suit, and start running and balancing. At first, it’s very difficult to run and not to lean to one side. It seems you will never be able to learn to do it, but after a few workouts, you feel like an experienced equilibrist. Our cosmonauts return in better shape, thanks to a special training program on the manual treadmill with the Chibis vacuum pants, which improve blood circulation to the legs. Training sessions in Chibis pants are always performed in pairs to control each other's condition, as you can lose consciousness!”

How to wear out an astronaut

For four months, our workouts followed the following pattern: three days of running, one day of rest and then three more days of running. The regimen changes once a month, from a manual treadmill to a motorized one, from running at a constant speed to interval running, switching between 5 km/h and 13 km/h. On the first day, we run for about 30 minutes, on the second, for 36 minutes, and on the third, the hardest, for 42 minutes.

The more difficult training session is, of course, the one with interval running, on a manual treadmill, on the third day. Running, and even just walking on a manual treadmill at a speed of 7 km/h is already exhausting. After 10-15 minutes, your whole body is covered in sweat. Imagine walking fast or running across the sand in heavy tarpaulin boots. If on a motorized treadmill when running at a speed of 12 km/h the pulse does not rise above 140 beats per minute, the same speed on a manual treadmill makes the heart beat much faster, while your lungs are gasping for air. There is so much sweat that it gets into your eyes, nose, falls in large drops on the floor and it seems that you never sweated so much in your life, even in a sauna. Your whole body is crying for mercy, but your brain is fighting its signals. Who will win this battle between willpower and self-pity? It all depends on your energy supply, how well you slept, how much you ate... One day you beat it, and on another you are just 30 seconds short of reaching the finish at maximum speed.

All crew members work out to different music. Crew surgeon Stephania Fedeye at first tried rap, then switched to classics, pop music and even audio books. In the end, Stephania decided to run in silence, listening only to the beat of her heart and the creaks of the treadmill. I for one, like to listen to Prodigy and Red Hot Chili Peppers to get in the right mood. 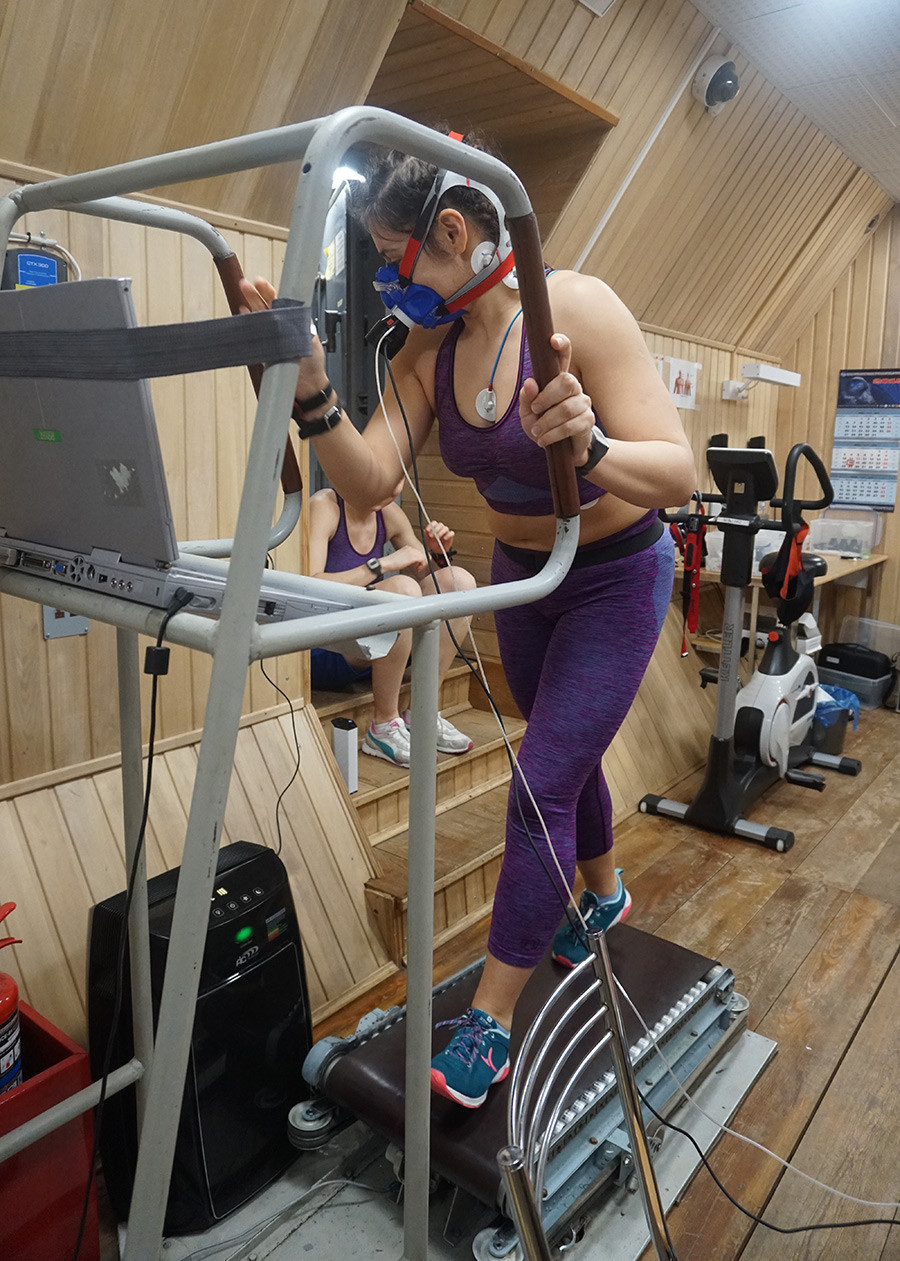 Why is music so important? Our body is looking for any means to alleviate its daily lot of half an hour of "sweat and tears". In moments when every cell in your body is begging you to stop and it seems that a little more and you will suffocate, by the force of your thoughts you get a second wind and by some miracle manage to complete your 42 minutes of running.

Each of us has one's own internal motivational dialogue. I usually tell myself: "You wanted to go into space, and here you are. On a real space station, workouts will be even harder." During the most difficult moments of running, when three minutes feel like 20, I imagine a spaceship flying to Mars. The destination is just a few hundred kilometers away. An incredible alien world of red deserts awaits the first people from Earth. Right after landing, we will have to be able to move freely, do hard physical work, which would be impossible without training on a treadmill during the long flight from Earth to Mars. Then you start treating the manual treadmill as a strict doctor, who helps you reach your goal, be it a flight into space or a strong slim body.

Soon, our SIRIUS19 Moon Flight Simulation Project will come to an end. Yesterday, I had my last workout session on “The Monster”. It was at that moment I realized that I had finally become friends with it. Having caught my breath and wiped the sweat both from myself and from its belt, for the first time I turned to it with the sadness of parting and said: “I will miss you, my old comrade-in-arms, because you did an excellent job clearing my head of unnecessary thoughts - and my body of extra pounds!”