Everything (we are allowed to tell you) about the Russian military 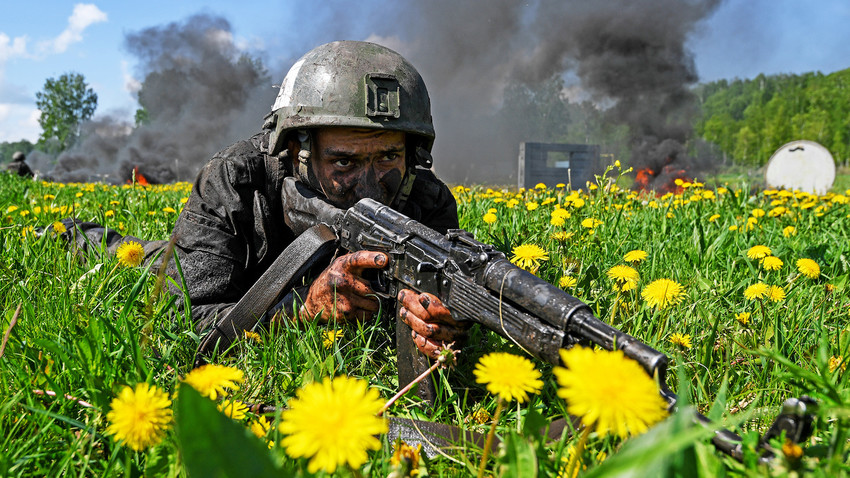 Alexandr Kryazhev/Sputnik
What makes Russia a force to be reckoned with: facts and numbers.

Russia is considered to be one of the greatest military powers in the world with more than a million people serving in its army defending the country's borders.

Down below we'll reveal you every aspect of its military force (that we are allowed to tell).

How strong is the Russian military? 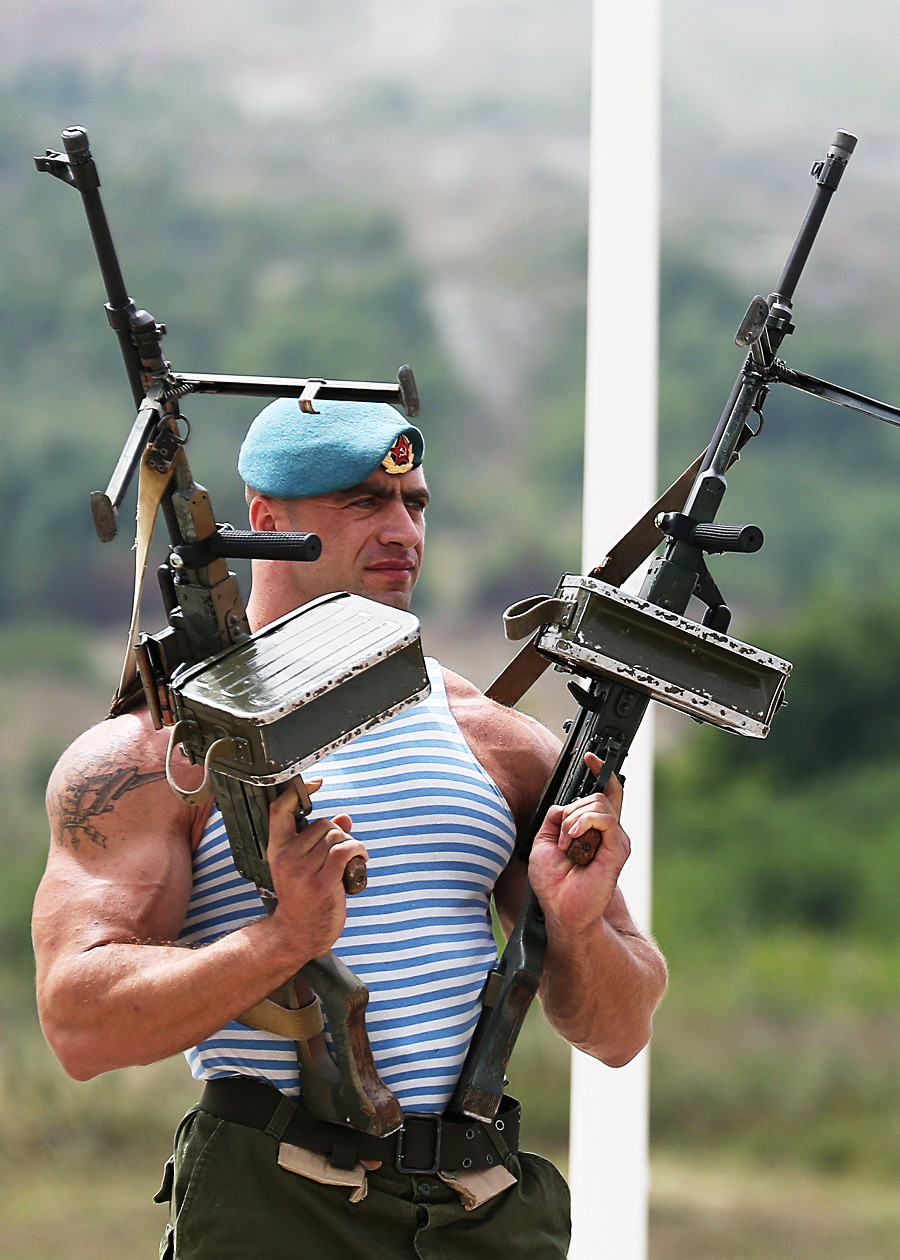 A paratrooper holds machineguns as he attends a military show marking the Paratroopers' Day, in Krasnodar region, Russia.

The Russian military is estimated to be the second (after the US) on the list of the strongest militaries in the world.

This assessment is conducted annually by the Global-Firepower agency and is based on analysis and comparison of all military forces’ firepower capacities - the number of active and reserve military personnel; the number of 'battle machines’ owned by ground, navy and air forces, and budgets militaries can spend on their drills, operations and purchases.

In 2019, Russia’s ground forces is still considered the strongest and biggest in the world, yet is surpassed by other countries in all other areas. 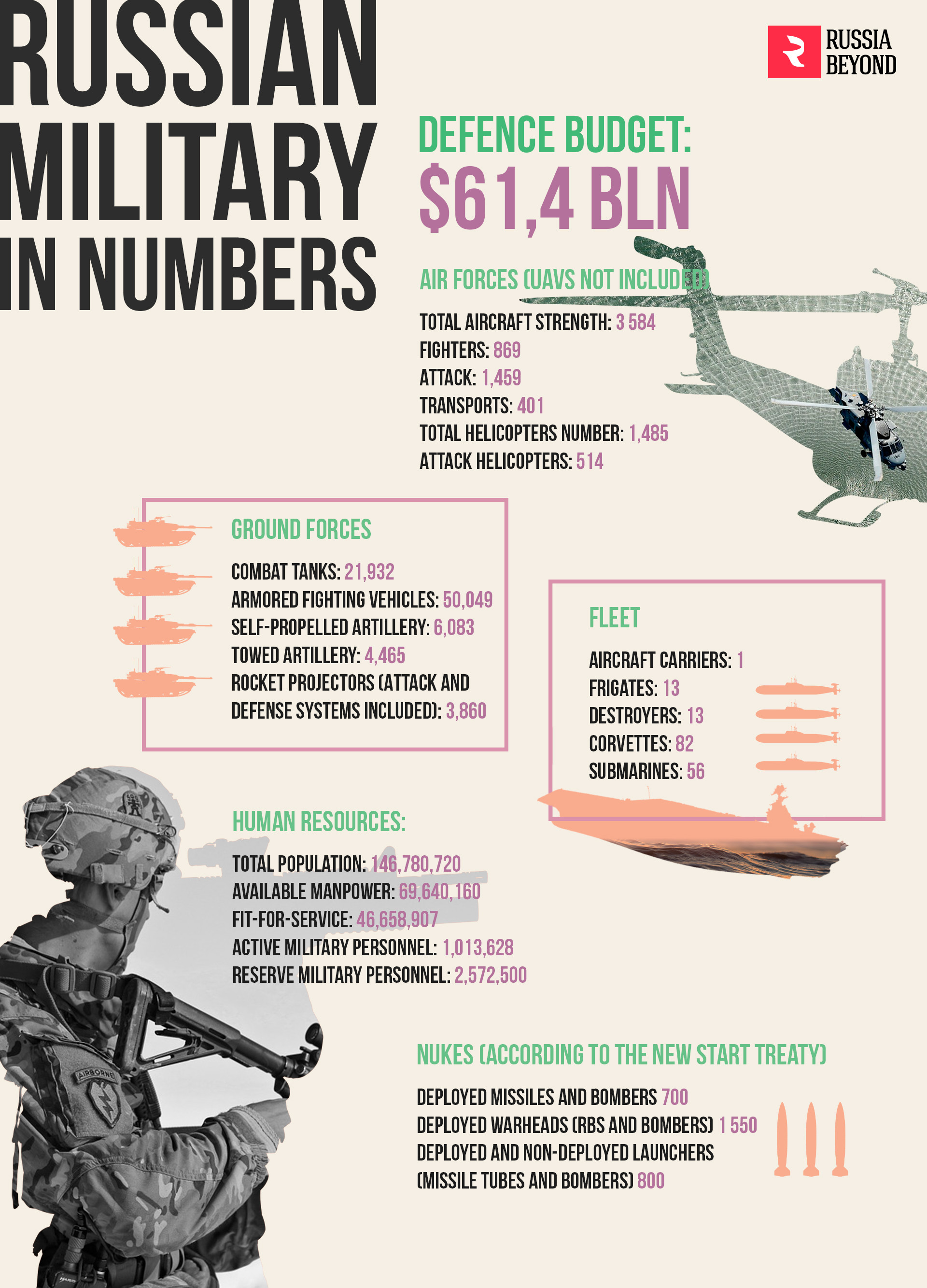 How many serve in the Russian military? 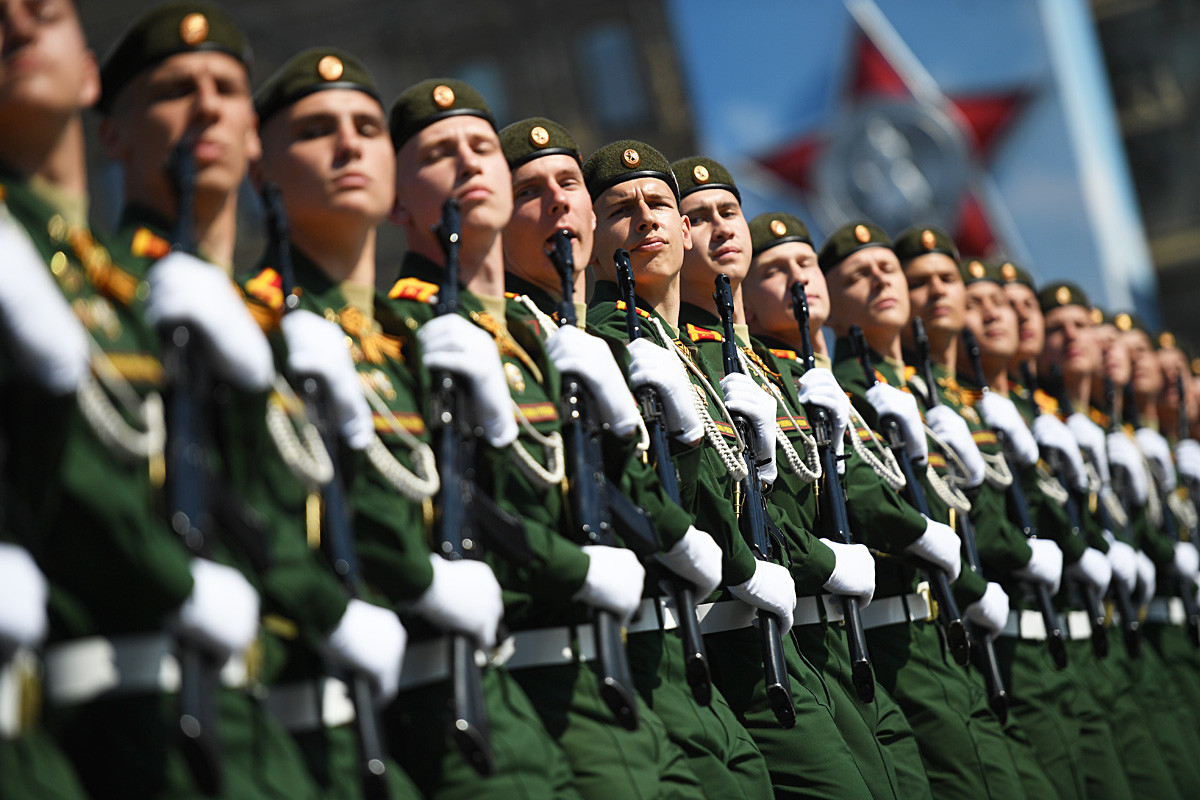 Cadets of the Military University of Russian Defence Ministry march during a rehearsal for the Victory Day parade at Red Square in Moscow, Russia.

According to President Vladimir Putin’s decree from November 17, 2017, the number of people currently serving in the Russian military is 1,902,758, including civilian servicemen.

1,013,628 of these are actual soldiers. This number includes 753 thousand contractors, as well as 260 thousand conscripts (men between the ages of 18 and 27 that are obliged to complete a 1-year military service).

The main reason why Russia still has not stopped mandatory conscription is due to its vast territory and the amount of people living on it. As mentioned above, there are 146,780,720 people living on its 17,125,191 square kilometres. Yet, nowadays, the Defense Ministry refrains from sending people from one part of the country to another (for example, from Moscow to Kamchatka) and instead tries to recruit soldiers in their native regions.

How much do soldiers earn? 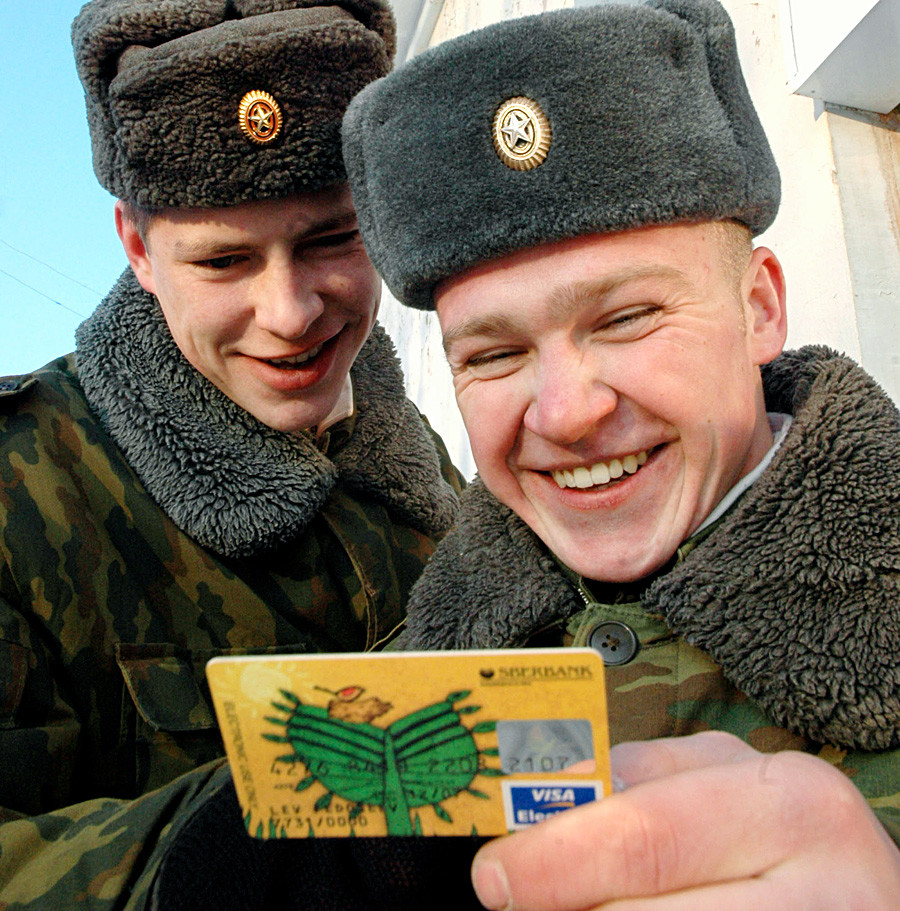 Contract servicemen get salary from an ATM cash machine

A minimal monthly salary of a private is around 30,000 rubles (ca. $480). However, it depends on the type of the military unit and the region of service.

For example, soldiers defending Russia in the North receive more than those serving in the Moscow region.

Can foreigners serve in the Russian military? 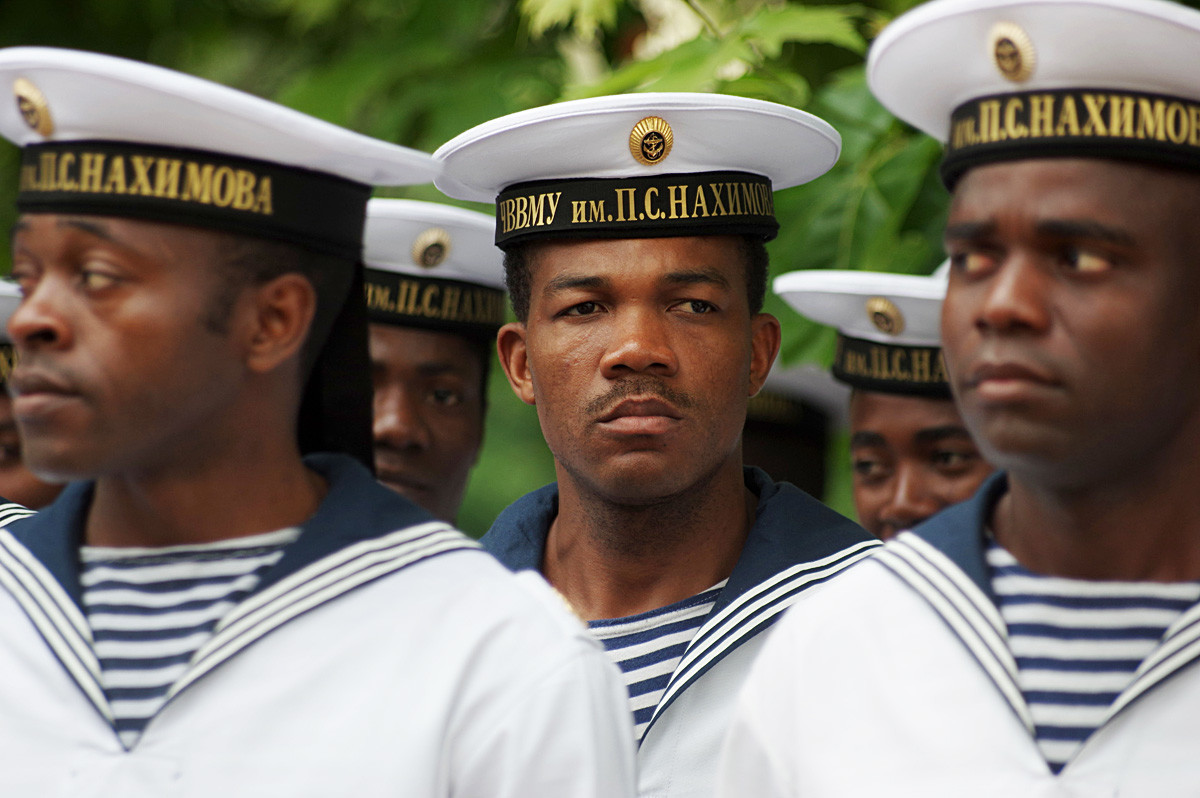 According to the presidential decree of 2015, any foreigner from the age of 18 to 30 can sign a contract and join the Russian military.

The first contract with the military is signed for five years.

These people will serve on positions of privates, corporals, sergeants and sergeant-majors.

The major requirements for candidates are the knowledge of Russian and the lack of legal issues with Russian and/or foreign governments. So, you won’t be able to avoid prosecution like some people do by joining the French Foreign Legion.

There will be no exclusions for foreign soldiers in the Russian military in case of war - these people WILL be obliged to defend Russia no matter what.

As of 2019, 295 soldiers with foreign citizenship were among Russia’s 1,902,758 servicemen. They all come from CIS republics - Kazakhstan, Armenia, Azerbaijan and so on. But, as of yet, no Americans or EU citizens have showed up to a conscription centre willing to abandon their citizenship in favor of becoming a Russian soldier and citizen.

Follow this link for the complete information on how to make your dream come true and join the Russian military! 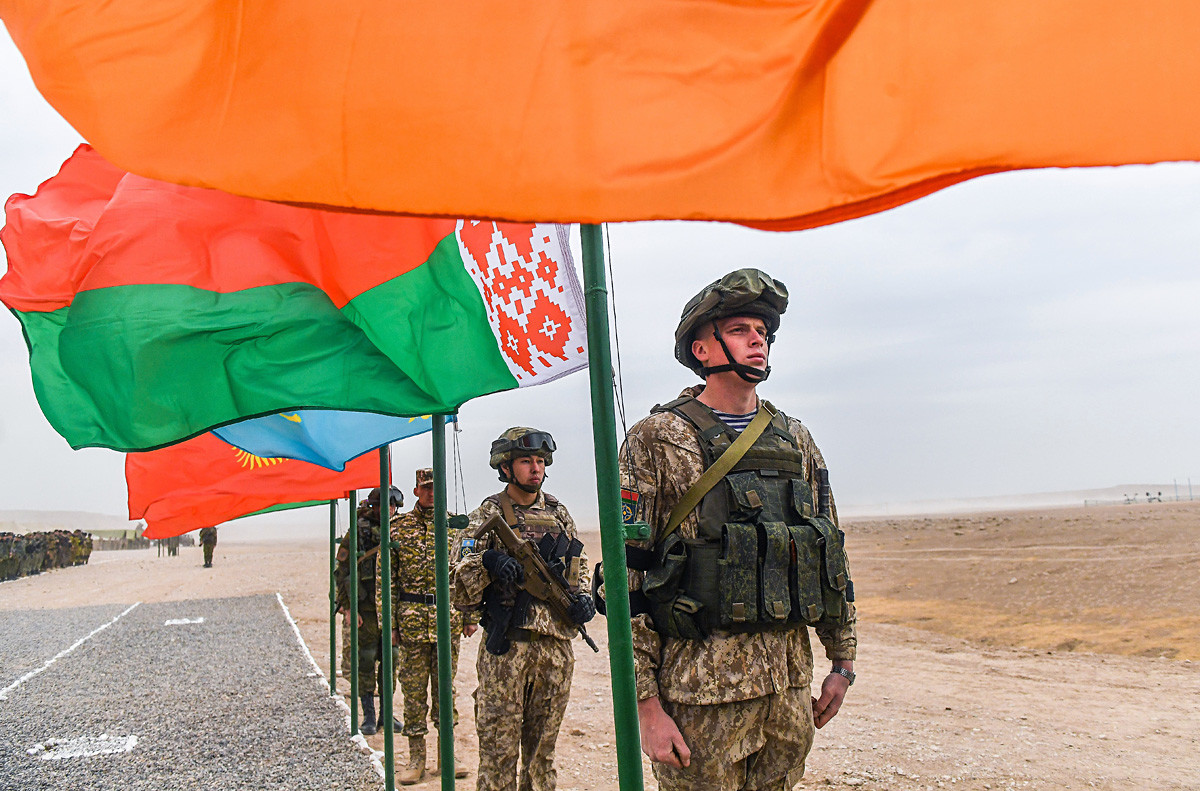 Service persons during the opening ceremony at the Khairmaidon base of the joint anti-terror drill of the collective rapid response force of the Collective Security Treaty Organization member-states, Tajikistan.

It turned into an alliance which is called the Collective Security Treaty Organisation (CSTO).

The CSTO charter reaffirmed the desire of all participating states to abstain from the use or threat of force. Signatories would not be able to join other military alliances or other groups of states, while aggression against one signatory would be perceived as an aggression against all (similar to NATO).

To this end, the CSTO holds yearly military command exercises for the CSTO nations to improve inter-organization cooperation.

The latest one was called ‘Centre-2019’, with more than 128,000 military men engaged in exercise drills in the Central part of Russia.

Follow the link to find more information about the drills and their purpose.