Science & Tech
Igor Rozin
Vitaly V. Kuzmin/vitalykuzmin.net
This firearm can hit targets behind any obstacles and protected by any modern armor at short distances — thanks to the 12.7 mm heavy-duty cartridge.

Russian police units have been furnished with a new super-powerful silent sniper rifle for short-distance targets up to 600 meters.

The development (codenamed VKS) is based on the US bullpup system (when the action and magazine are behind the trigger) in order to reduce the rifle’s dimensions and allow the sniper to operate comfortably in narrow urban spaces.

“It’s all about ergonomics. The police wanted a compact rifle to eliminate terrorists wearing the most high-end protective gear. And not give away the sniper’s position at the same time! So we opted for the most powerful subsonic ammunition, designed a short rifle, and developed a special silencer for it, which extinguishes the discharge flash,” JSC A.G. Shipunov Design Bureau engineer Ilya Sidorov told Russia Beyond.

In actual fact, the silencer turned out the same size as the gun itself. All told, the rifle plus attachment reaches a little over 112 cm in length. The weapon is comparable in weight to others in its class: 6.5 kg with an empty magazine. The latter, incidentally, is designed for five heavy-duty cartridges of 12.7x55 mm caliber. 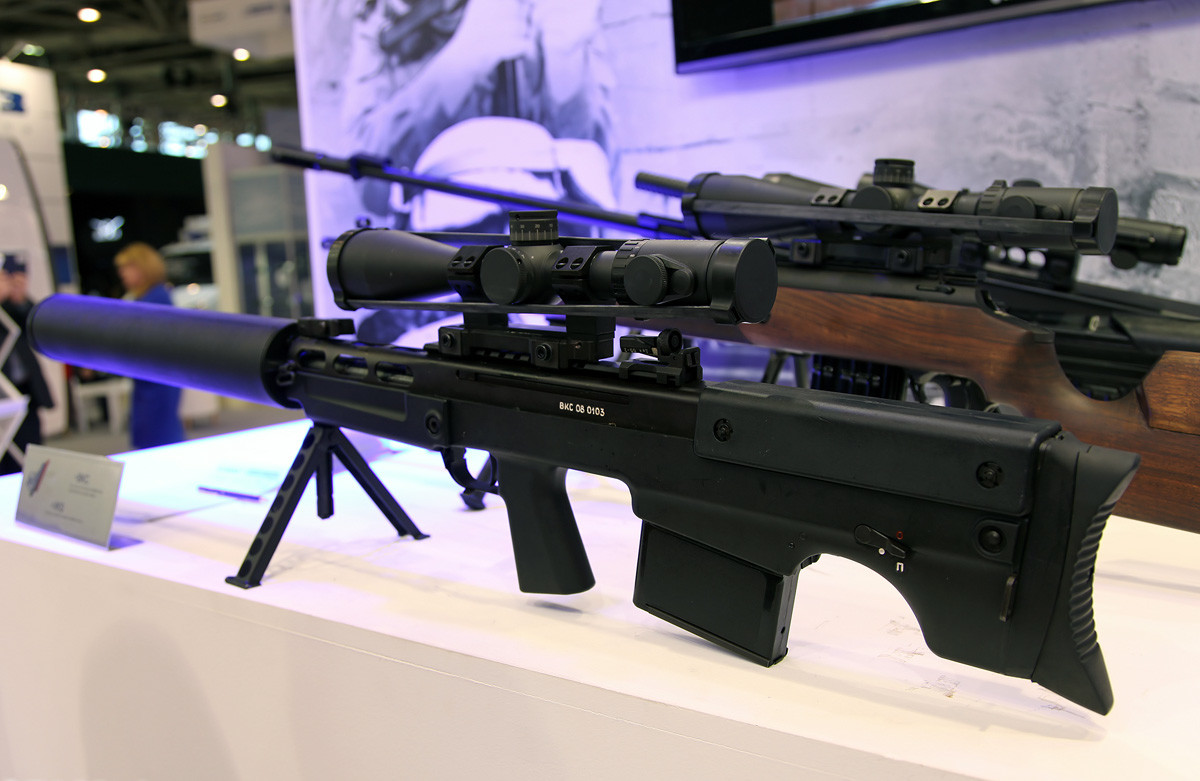 When asked about advantages over competitors in the short-range sniper rifles market, the designers reply that their weapon delivers silent shots, but the competition does not.

“Other calibres that operate at these distances, for example, NATO’s .308 Win, are supersonic. This means that the sniper can’t make a silent shot, and the flash from the rifle will reveal their position and endanger the whole operation,” Sidorov explained.

Moreover, he added that the bullet from their cartridge is so heavy that even if the enemy’s bulletproof vest miraculously stopped it somehow, they would die anyway “from the tremendous ‘water-hammer’ effect.”

“Our ammunition has a tungsten core. It is several times more powerful than army ammunition with a steel core, never mind lead-filled hunting cartridges,” he noted.

The weapon can destroy the enemy even if hidden behind a brick wall.

“The enemy might be concealed behind a wall two bricks thick, but our firearm will still smash through it and eliminate the target,” said the design engineer.

Among the rifle’s shortcomings is its operational accuracy. The bullet spread when firing at 100 m is 3.5 cm. This may seem insignificant, but, in the heat of battle, the seconds spent by the sniper on re-aiming the weapon at the target when shooting at 600 m can cost the lives of hostages or colleagues. Therefore, the rifle is designed for one highly accurate kill shot.

According to the designers, the weapon has been sent “to all security agencies that fight terrorists on Russian soil.” However, citing state secrets, they declined to say whether the rifle had been tested live in Syria.