What is the most powerful FSB assault rifle capable of? 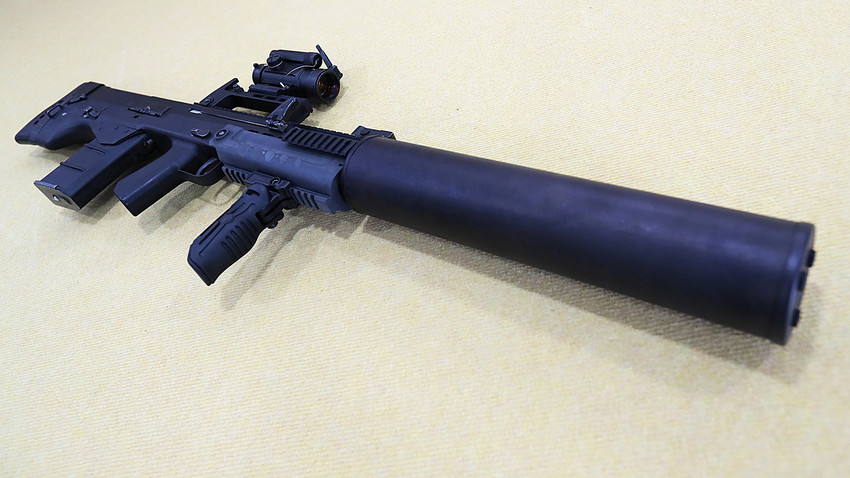 Vitaly Belousov/Sputnik
It not only pierces any wall, but does so in complete silence.

In late November, Russia’s FSB spetsnaz special forces unveiled one of their most powerful guns at a firing range in suburban Moscow — the silent 12.7x55mm-caliber ASh-12 assault rifle.

According to spetsnaz commandos, the rifle is designed to work in narrow spaces at short distances of 50-100 meters.

“A subsonic large-caliber cartridge was developed specially for it, able to pierce the most protected bullet-proof vests. The weapon is ideally suited for use against well-fortified and defended targets in urban areas surrounded by dense buildings,” a special forces officer at the training ground told Russia Beyond.

He underlined that spetsnaz units would prefer a traditional AK for operations in mountain and forest areas, since it has greater accuracy and range.

“The ASh-12 is made according to the bullpup system (i.e. the magazine holding the cartridges is located in the buttstock area behind the trigger and cocking mechanism) to reduce the size of the weapon. And an under-barrel grenade launcher can be suspended from it to force the enemy out of its hideout,” the officer added.

All this is complemented by Picatinny rails at the top, bottom, and side of the rifle for customizing the weapon to the shooter and installing optics, collimator sights, lights, handles, and other accessories.

Despite its power, the weapon has two significant drawbacks: recoil and accuracy. The recoil thrust when firing literally jolts the rifle out of the hands of the inexperienced shooter. As for skilled operatives, precious fractions of a second are lost by having to return the rifle to the line of fire and re-aim at the enemy.

With that in mind, alongside the ASh-12, FSB special forces were supplied with a sniper rifle based on the same ammunition for eliminating targets at a range of up to half a kilometer.

Read about the FSB’s most silent sniper rifle in Russia Beyond’s dedicated article.