Crossing FROZEN rivers BY CAR is common in Siberia 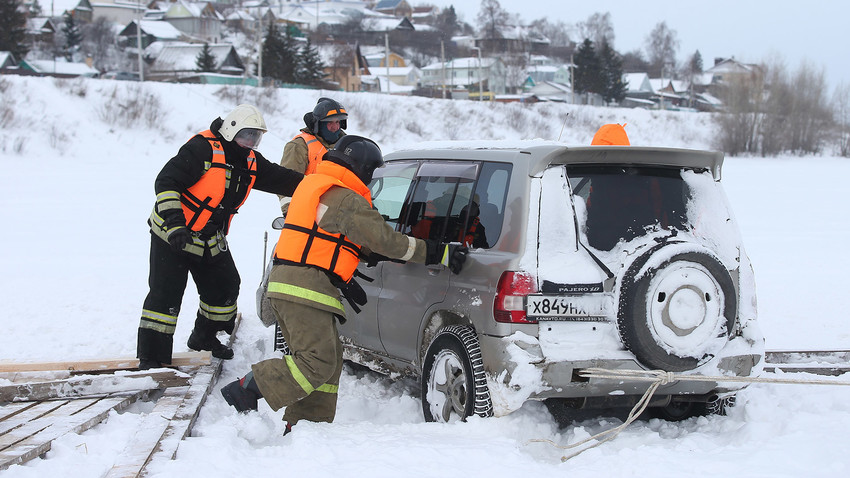 Exercises to rescue a car fallen through the ice in the Verkhny Uslon District, Tatarstan, January 2018.

Yegor Aleyev/TASS
In the north, people literally drive on frozen rivers. Wouldn’t it be easier to build a bridge? Well, not necessarily.

Residents of Salekhard and Labytnangi constantly travel between the two cities: Salekhard has an airport, a cinema and a night club, while Labytnangi has a railway station and cheaper food prices. These two Yamal Peninsula cities are located opposite each other across the Ob River, seemingly very close to each other. Yet, for locals, crossing the river is a real adventure, because there is no bridge. 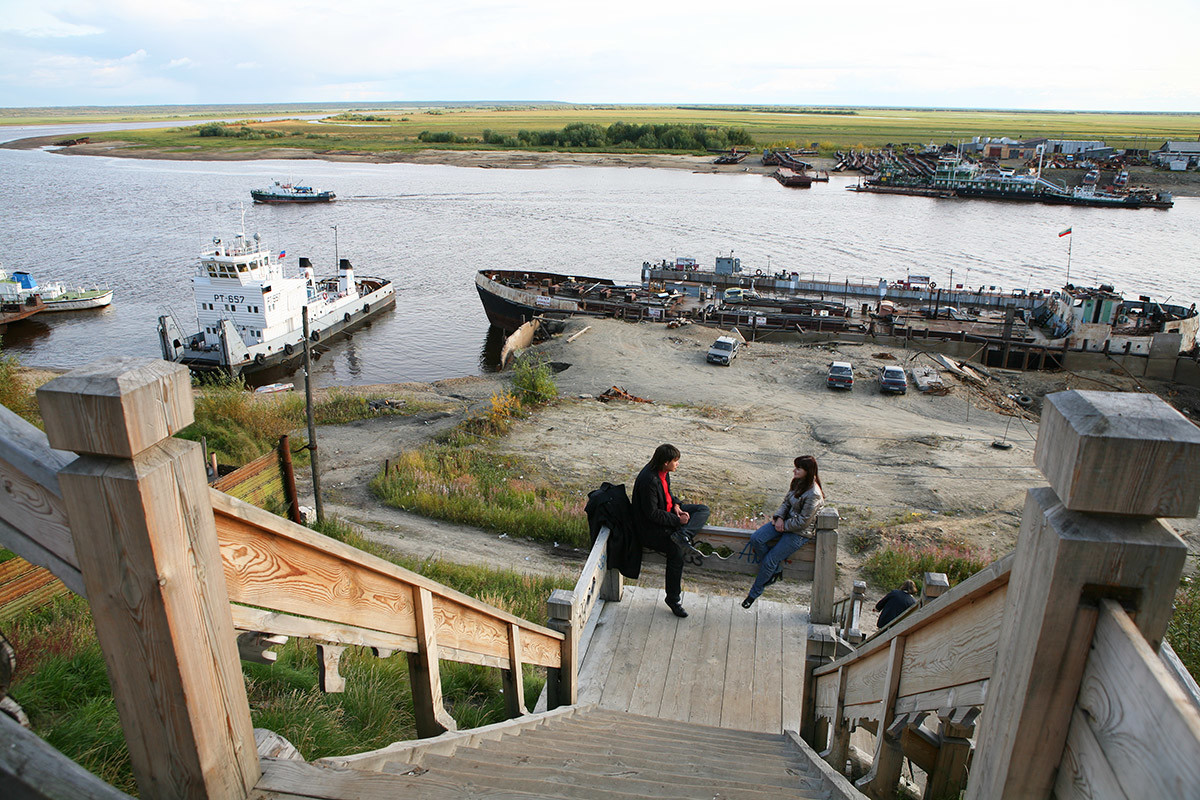 In summer, there are ferries that run between the two banks, but in winter, local residents have to use an “ice bridge” to cross the river. Crossings like this can be found in almost any northern part of Russia, from Arkhangelsk Region to Yakutia.

How is an ice crossing made?

An ice crossing, or zimnik (Eng. “winter road”), is not just a passageway on frozen water. It is a system of lanes with a certain distance between them and traffic rules: the speed limit on ice is 40 km/h (25 mph). An ice bridge usually takes two to three weeks to build from the moment the river is covered with a thick enough ice crust.

This is what an ice bridge looks like in December

Boards are laid out along the entire length of the crossing, they are then flooded with water that freezes around them for extra strength. The process is called 'ice reinforcement'. Holes are drilled in several places, and water is pumped up through them to flood the ice and the boards. Then the water is levelled using a tractor, or manually, so that it freezes evenly. Only after this, road signs are installed and lighting is set up (but not everywhere as it requires electric cables). 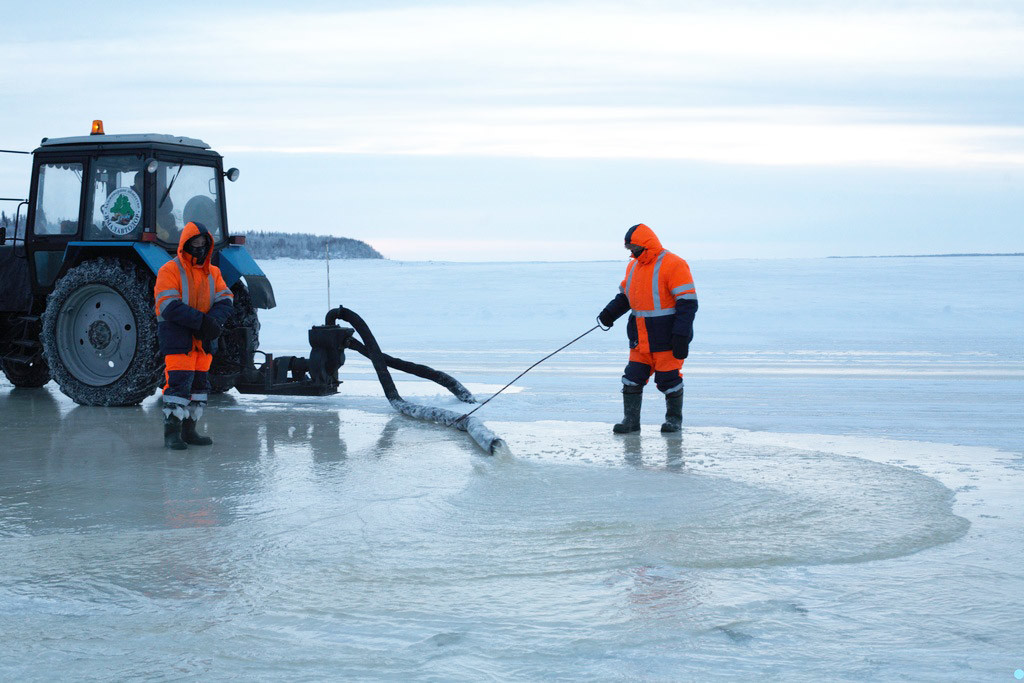 The ice road between Salekhard and Labytnangi.

The Salekhard crossing has three lanes, each 30 m (98.5 ft) wide and 1,700 m (5,577 ft) long. From Salekhard, there is one lane for all vehicles, while from Labytnangi, there are two lanes, one for cars and the other for trucks transporting goods that have arrived by rail. 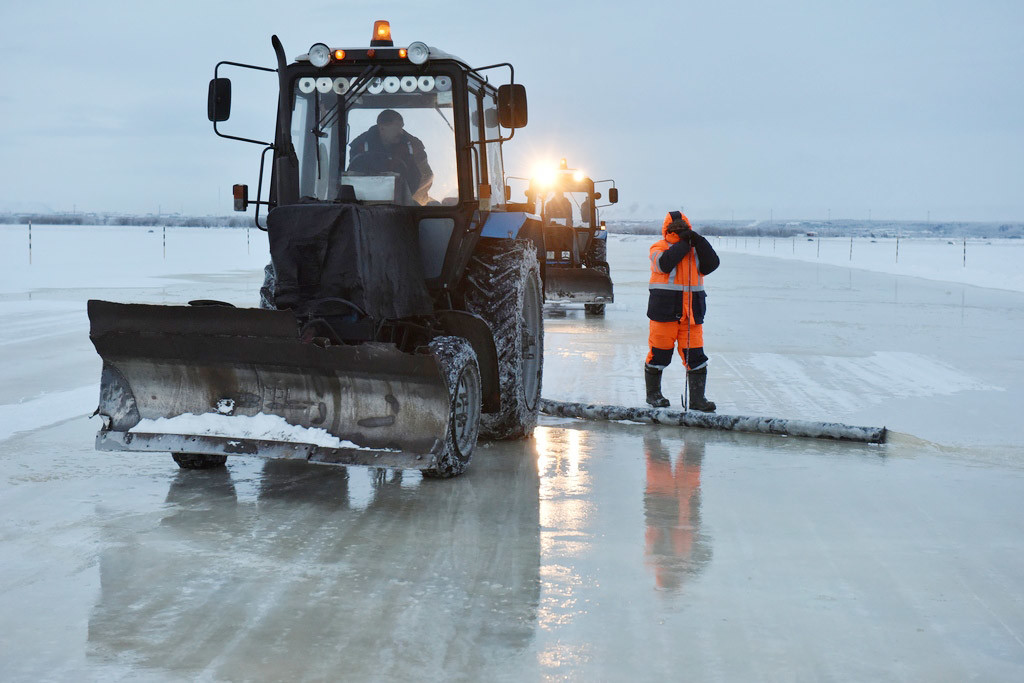 The ice road between Salekhard and Labytnangi.

“The crossing takes only 15 minutes,” says local resident Tatyana Mokhnova. “In winter, it is not scary at all; it is a fully equipped road, with road signs, traffic police posts, cameras, and these days, you can check the condition of the road online from home.”

Road workers constantly monitor the thickness of the ice, freezing more of it if necessary, over and over again, until the thaw begins.

Period in-between seasons is the worst

An ice crossing in late April

After a thaw or when the ice is not yet strong enough, an ice crossing becomes much less safe. Tatyana recalls how she once used an ice crossing the day before it was scheduled to close, and she got more thrill from it than she had bargained for. “I needed to pick up a container with goods from Labytnangi, because the crossing was closing and otherwise I would have had to wait for a long time. I found a KAMAZ truck that agreed to take me. So, we were driving, and the road was already melting, and the water was rising to our window, we were literally floating. It was awfully scary, but the driver told me: ‘What are you afraid of? You are not the first, you are not the last.’ It was all good for a KAMAZ.”

Usually, between seasons, hovercraft are used to traffic people across the river. But you cannot really carry much luggage on a hovercraft, a small suitcase at best. That is why local residents look forward to the opening of the ice crossings. 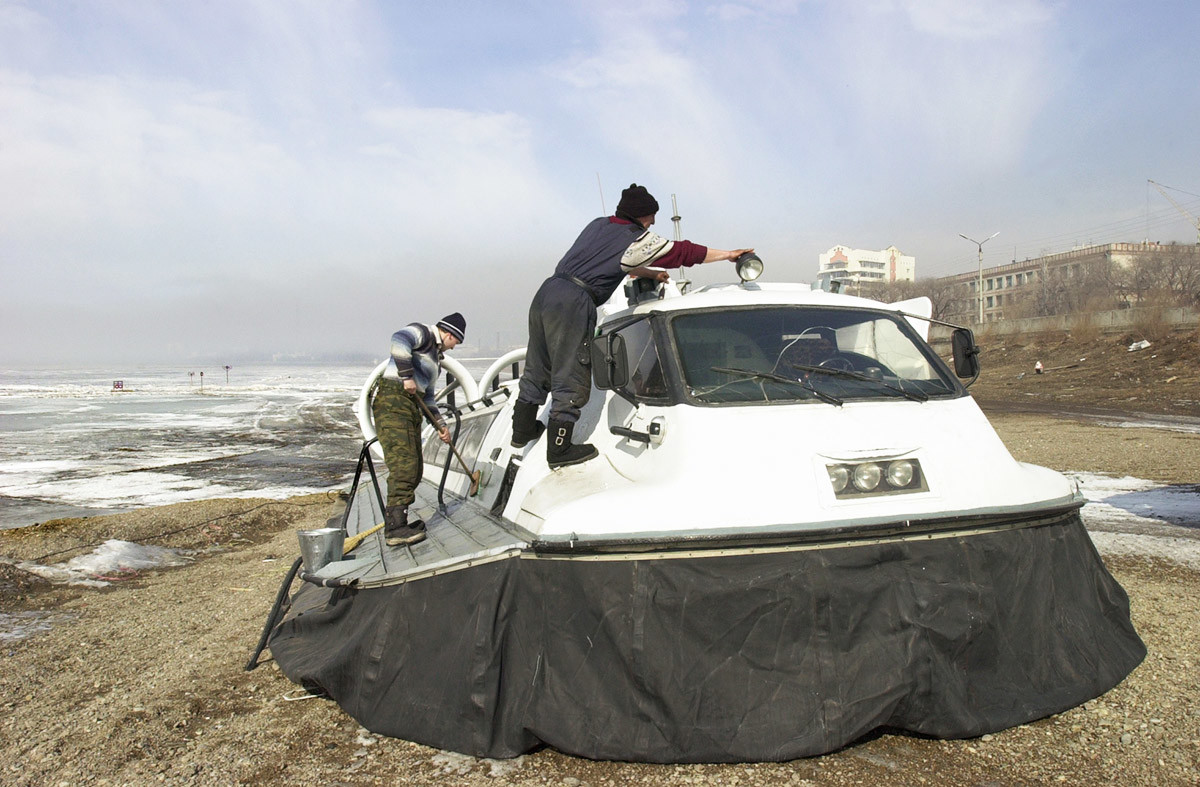 “Until the ice has become thick enough, all shops in Salekhard try to stock up on foods with long shelf life. Dairy products disappear, only pasta and canned meat remain on the shelves. So when dairy products reappear, we know that the ice road is operational,” says Tatyana.

Here, for example, is a small crossing on the Northern Dvina River. The ice has already started to move and the crossing is closed for cars, there are no boats either, but people need to get to the other bank somehow, so they have to cross the river on foot. 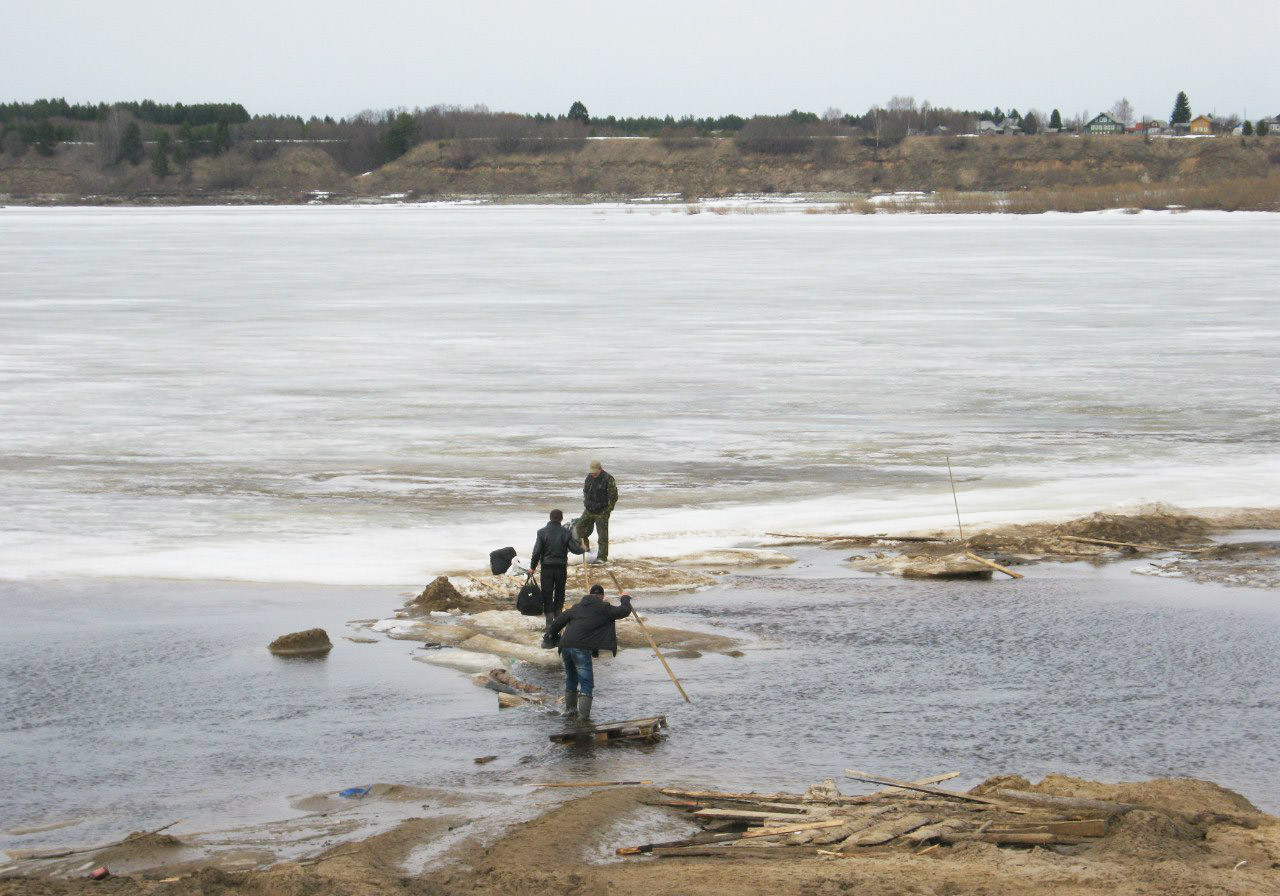 The Northern Dvina River in spring.

That said, drivers often ignore warnings from road services and drive on roads like these at their own risk. As a result, their vehicles may end up at the bottom of the river.

“In-between seasons, it is impossible to transport any cargo from Yakutsk, it all accumulates on the right bank, by the Nizhny Bestyakh railway station,” says Nikita Tananaev, a local resident. “I have never taken the ice crossing after it has been closed, but some break [the rules], and then there may be problems. Often, drivers cause their trucks to sink and then ask locals to help find them. There are still many containers sitting at the bottom of the river.”

Why not build a bridge?

Back in the late 1940s and early 1950s, there indeed was a plan to build several bridges in Yamal and Yakutia: Soviet leadership wanted to implement the Transpolar Railway project from Salekhard to Igarka (about 1,300 km; 807 mi. along the Arctic Circle, on marsh land). In the end, several sections of the railway were built, which were supposed to be linked by bridges across the rivers. That was when the plan ran aground: building those bridges turned out to be too expensive and difficult.

So, what was the problem?. The Ob River does not seem that wide. It turns out that northern rivers are very capricious: firstly, they tend to change their course, and in a couple of years' time, a bridge may end up in a completely different place. Secondly, they have tricky, “unstable” riverbeds, and it is essential to choose the right place for a bridge, so that when the ice starts moving, it does not damage the pillars of the bridge. Thirdly, we are talking about permafrost, so when it melts in the summer, the bridge could potentially drift away! 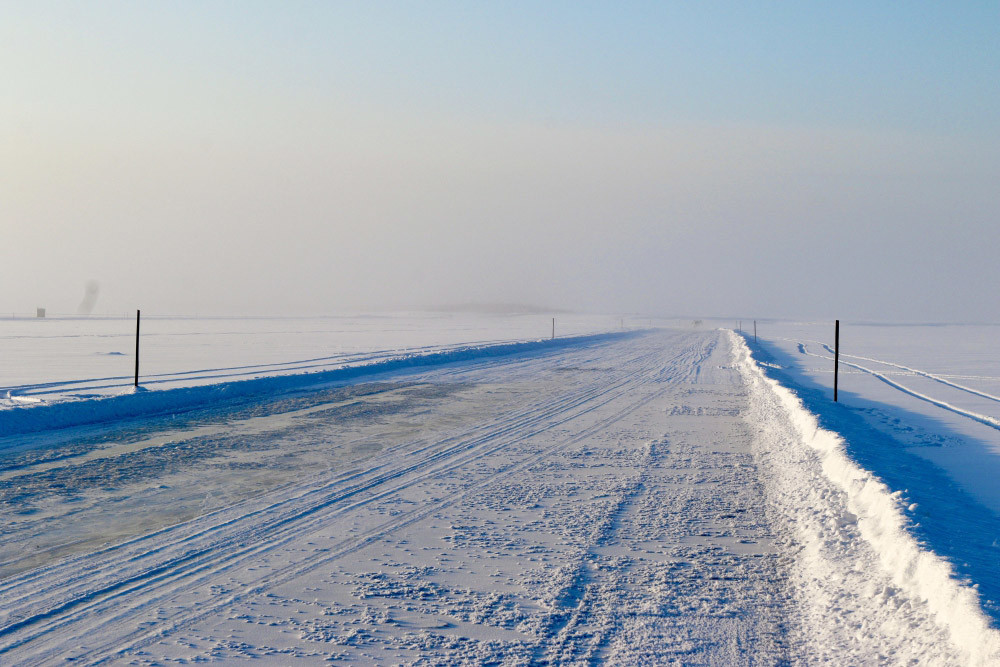 People in Yakutsk are very keen to have a bridge, although the conditions there are even more difficult: the Lena River is about 3 km (1.86 mi.) wide, and together with access roads, the width of the bridge would have to be about 10 km (6.21 mi.). It is difficult and expensive. “In addition, we often have ice jams, when in spring, the water level rises, the ice breaks and where the river bends, the ice accumulates and blocks the water, which often results in floods,” says Nikita Tananaev.

Nevertheless, there are new plans to build bridges in Salekhard, Yakutsk and several other big northern cities over the next five years: the designs for these future bridges have already been approved.