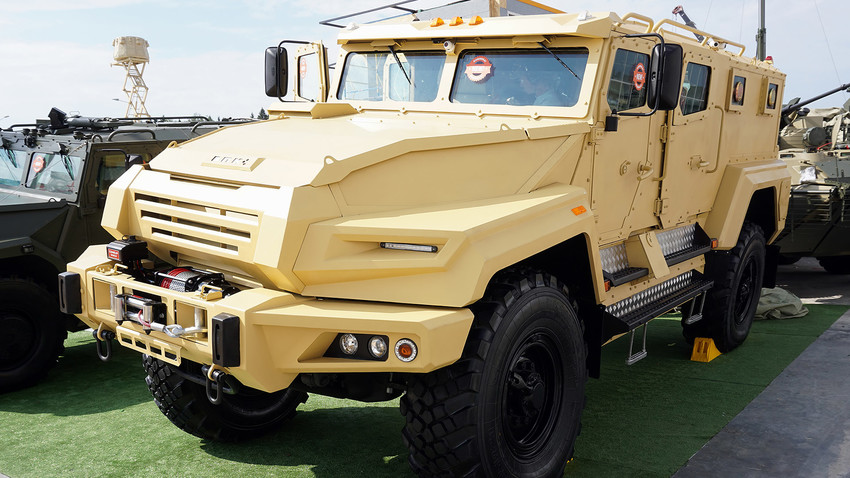 Vitaly V. Kuzmin/vitalykuzmin.net
The VPK-Ural will be able to transfer special forces to the frontline even after riding over a landmine packed with six kilos of TNT.

Although battlefield tests have just begun, one unit has already been sent to a foreign customer for combat runs.

“The vehicle is undergoing preliminary tests, and we have already sold one abroad. At the customer’s request, we made it a little smaller — for a crew of eight,” Alexander Krasovitsky, CEO of VPK, told Russian media.

The head of the corporation did not reveal the buyer, citing corporate secrets. Nor did he rule out increasing the order book for the machine if it proves itself not only on the training ground, but in real operations abroad.

The vehicle was first unveiled to Russia and the world a year ago at the Army-2019 arms show outside Moscow.

The machine, weighing 14.5 tons, is sheathed in armor thick enough to withstand a direct hit from the world’s most powerful large-caliber sniper rifles and machine guns. The VPK-Ural is 6.5 meters long and 2.5 wide, and has gun slots on either side for submachine gunners and automatic riflemen to fire on the move, or to transform the vehicle into a mini-fortress on the battlefield.

Inside, it can accommodate up to 12 soldiers in full combat gear (approximately 40-50 kg of weapons, armor, ammunition, and other kit on top of their own bodyweight). It is also fitted with anti-trauma seats, so called because if the vehicle rides over a mine, the seat absorbs a significant part of the impact from the explosion. Moreover, the underside is designed to protect against an explosive containing up to 6.5 kilograms of TNT.

MIC asserts that, like the Armata platform, the development is multipurpose and can be used as “a base for mounting various weapons,” without specifying what kind.

In the event of successful testing, MIC could win a contract under the Russian military’s rearmament program to 2027. The VPK-Ural is perfect both for frontline units operating in the Middle East and for the FSB and the National Guard, who need to smoke out militants in urban areas,” military analyst Dmitry Safonov told Russia Beyond.

As he explained, it is too early to talk about competitive advantages or disadvantages, since the company has yet to report the test results.

“We will be able to speak about contracts and orders after it gets a run in Syria. The vehicle's future is rather hazy at present, since the armored car segment is fiercely competitive both in Russia and abroad. So the VPK-Ural's fate will become known only in a year or two,” the analyst concluded.