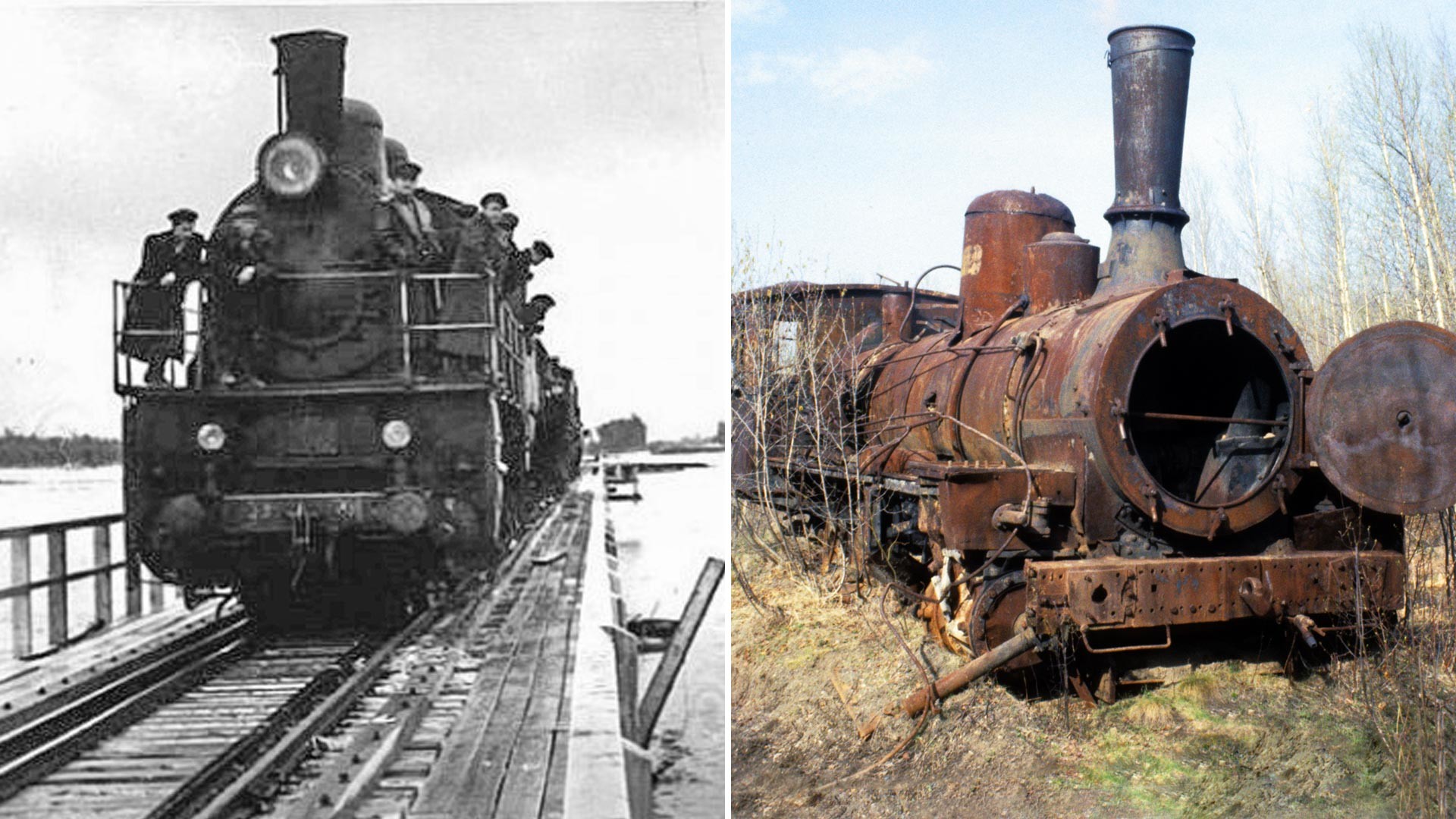 Archive photo; Vitaly Ivanov/Global Look Press
Try to imagine the Arctic Ocean without ice. Not easy, is it? Well, the Soviets not only imagined it, they even thought about building cylindrical houses for people there to live in and putting a railway line through the Arctic wilderness.

One-fifth of Russia’s territory lies above the Arctic Circle, and yet just one percent of the country's population – some 1.5 million people – live there. Permafrost, harsh winters lasting most of the year, polar days and nights.... altogether, these conditions can’t exactly hardly be called comfortable. Nevertheless, the importance of developing the Arctic has always been clear. It is rich in natural resources, and the Arctic Ocean offers the shortest sea route from Europe to Asia. It is therefore not surprising that the USSR came up with some truly incredible projects for this part of the country. 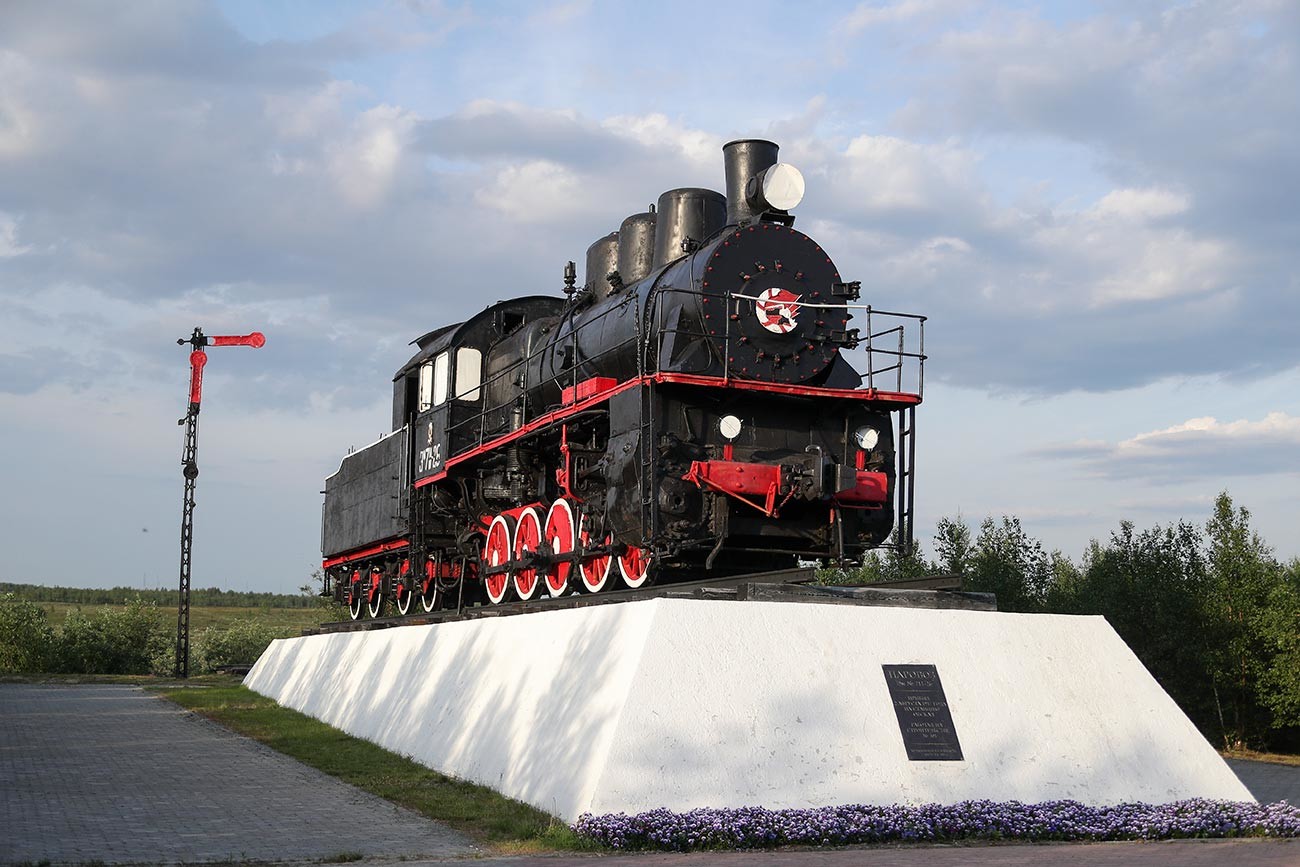 Salekhard. The memorial to the Project 501.

A transpolar railway was one of the last massive-scale construction projects during Joseph Stalin's rule. It was supposed to connect the cities of Chum, Salekhard, Nadym, Novy Urengoy and Igarka, which meant building a total of 1,300 km of tracks through virtually impassable forests, rivers and swamps. The railway was built to be single-line with 106 passing loops and 28 stations located every 40-60 km. Its construction began in 1947 when some 80,000 Gulag prisoners were ordered to lay tracks beginning at both ends of the future line. Not surprisingly, the whole project was highly classified with the western section of the line coded as No 501 and the eastern one as No 503. 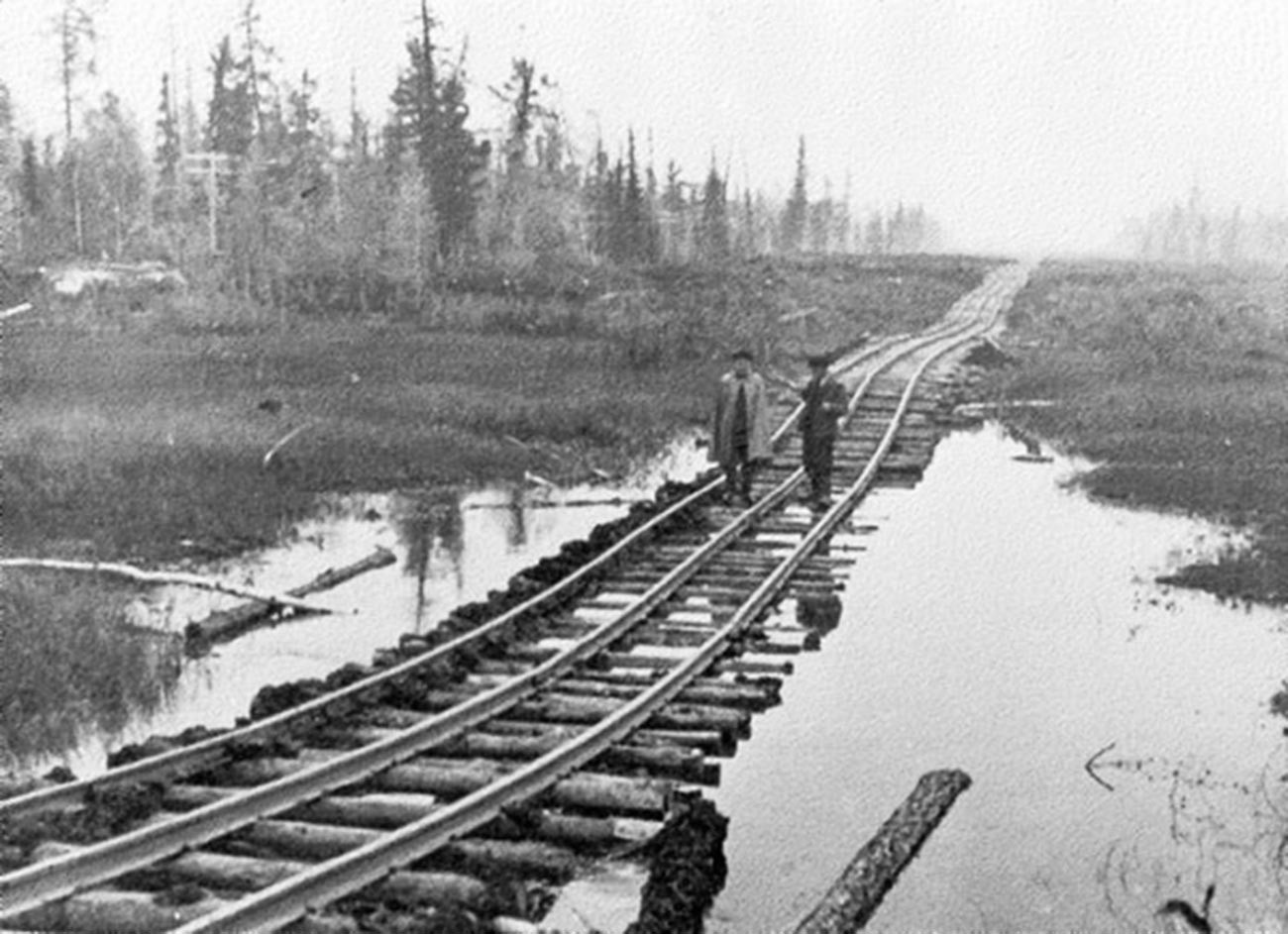 Builing of the railway.

They primarily used old tracks dating back to the early 20th century. It was decided not to build railway bridges across the Ob and the Yenisei. The plan instead was that in the summer the rivers could be crossed by ferries and on ice in the winter. For several winters, logs and sleepers were frozen into the rivers so a steam locomotive with freight cars could pass. 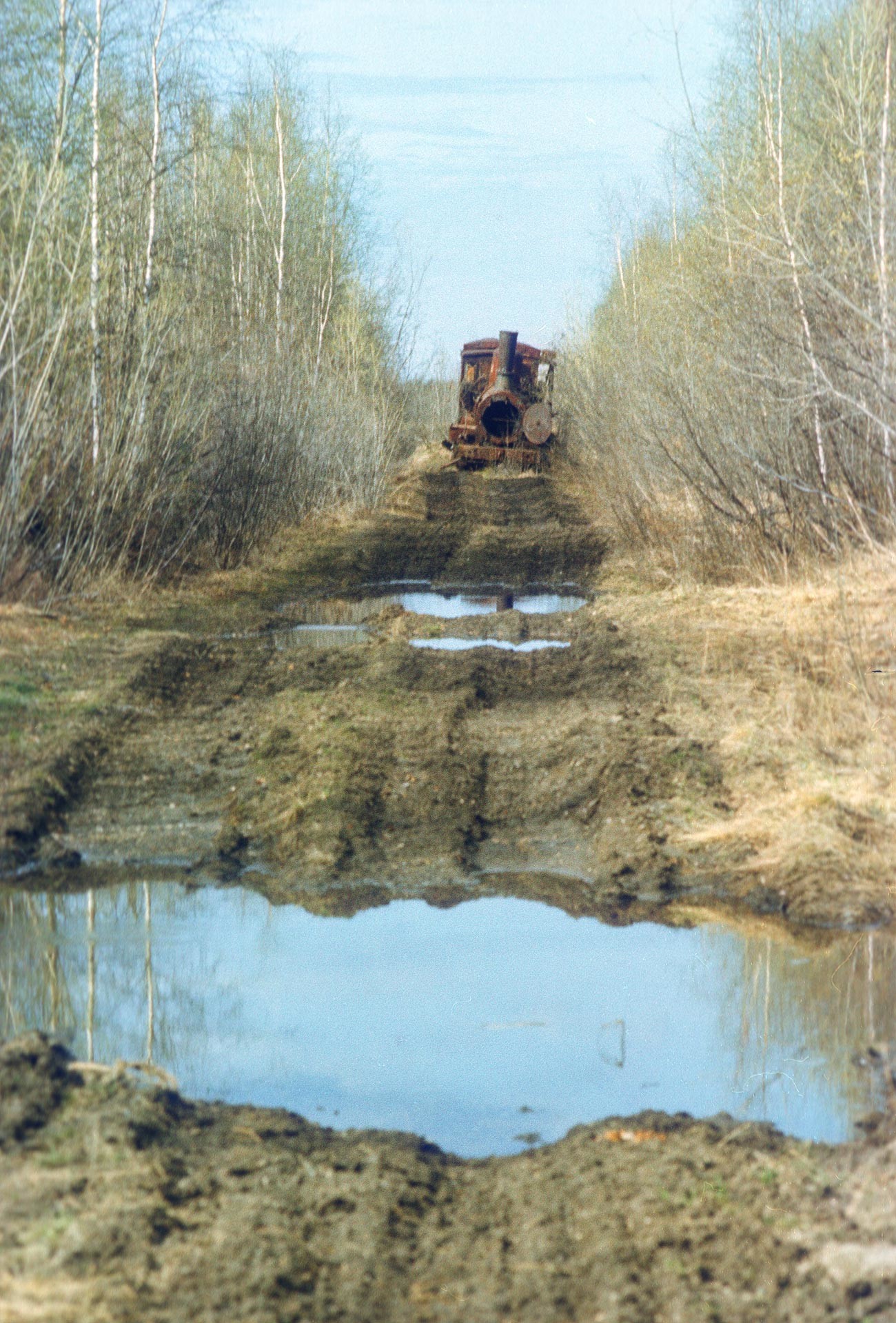 Camps, engines, bridges and other stuff was abandoned in the tundra.

Construction continued for nearly six years. In this time, 700 km of the railway was completed, although the two sections were never connected. After Stalin's death in 1953, construction came to a halt, the Gulags were closed, and the tracks that had been built were promptly abandoned. 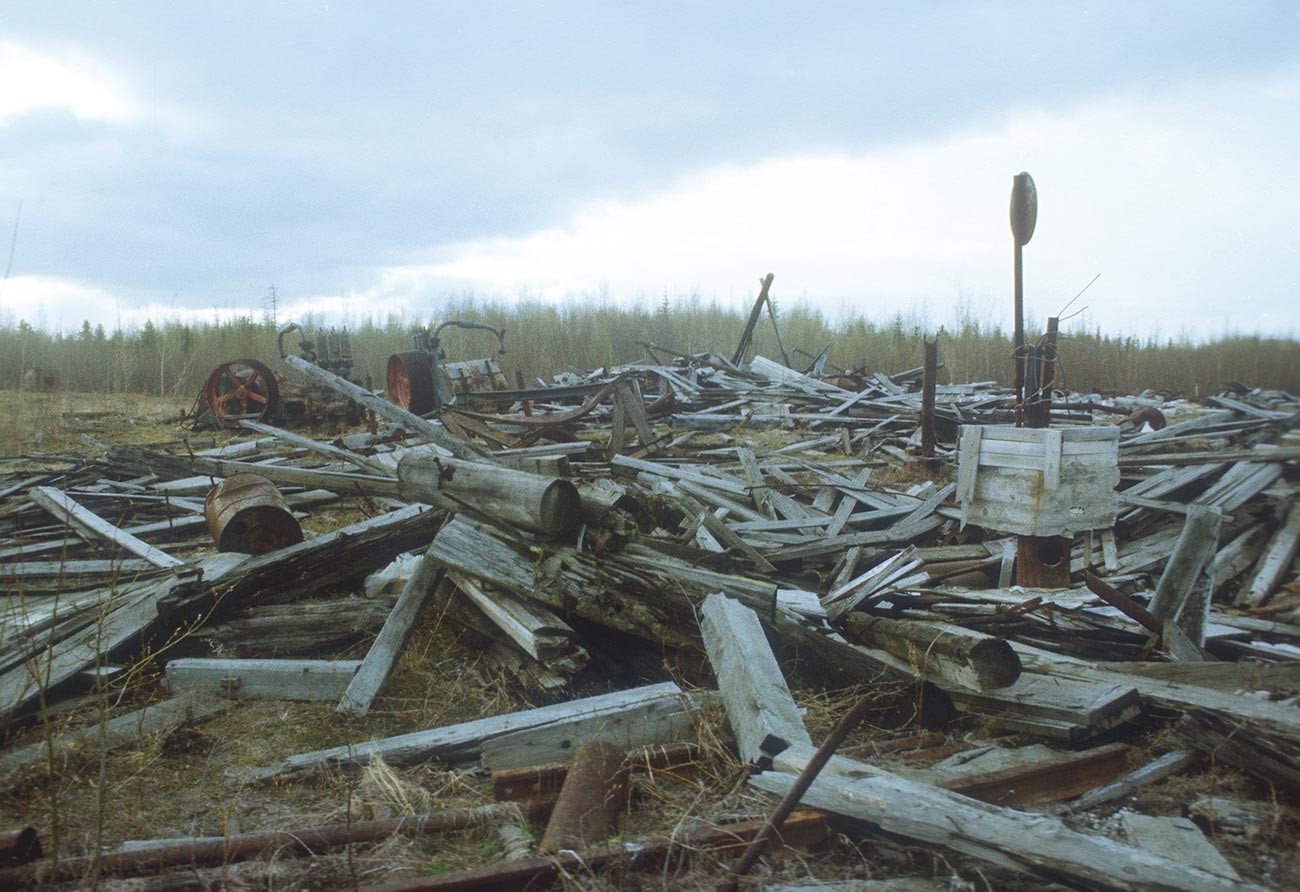 The giant project was shut down.

In the Siberian wilderness, you can still come across rusted steam locomotives on rails, wooden barracks and a series of camp towers. One such locomotives stands on a pedestal on the outskirts of Salekhard as a monument to the “dead road.” 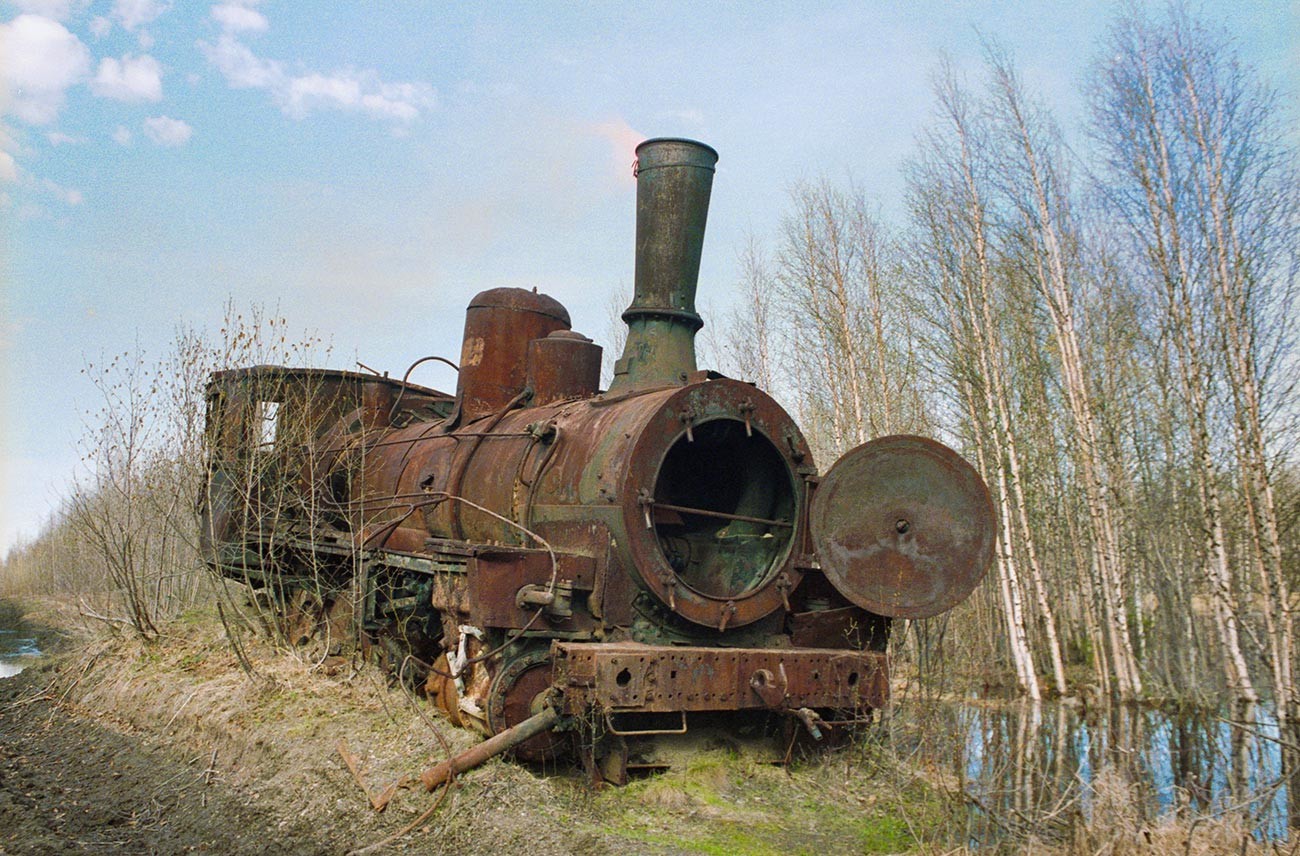 An abandoned locomotive in tundra.

Nowadays, only one 200-km section of the original railway line between Chum and Labytnangi (a town on the other side of the Ob River from Salekhard) remains in operation, with trains from Moscow and Vorkuta making stops along it. Additionally, several small sections of the line in the Novy Urengoy area have been restored and are used for industrial purposes. 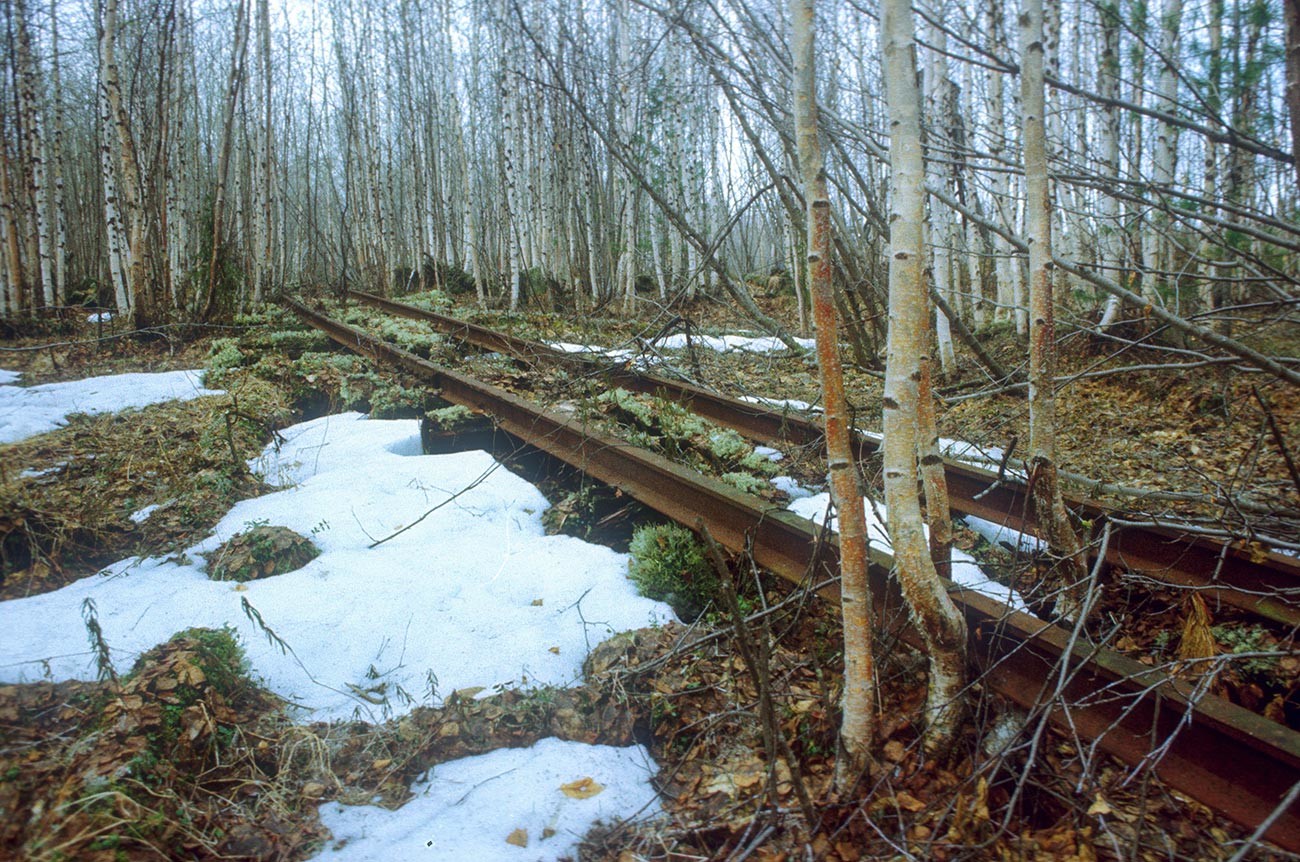 The railroad in tundra.

2. Nuclear weapons for the Arctic Ocean

The Northern Sea Route is the shortest route from Europe to Asia. There’s just one not-so-minor problem: Arctic ice makes it impossible to navigate through it easily. Were it not for the ice, Russia could have set up an economically attractive freight transit route here, making domestic and international transit transport much cheaper, not to mention bringing further development to northern seaports and cities. But perhaps there could be some way to reduce the impact of ice on shipping in the Arctic Ocean? Soviet scientists had a rather unconventional idea for solving this problem. 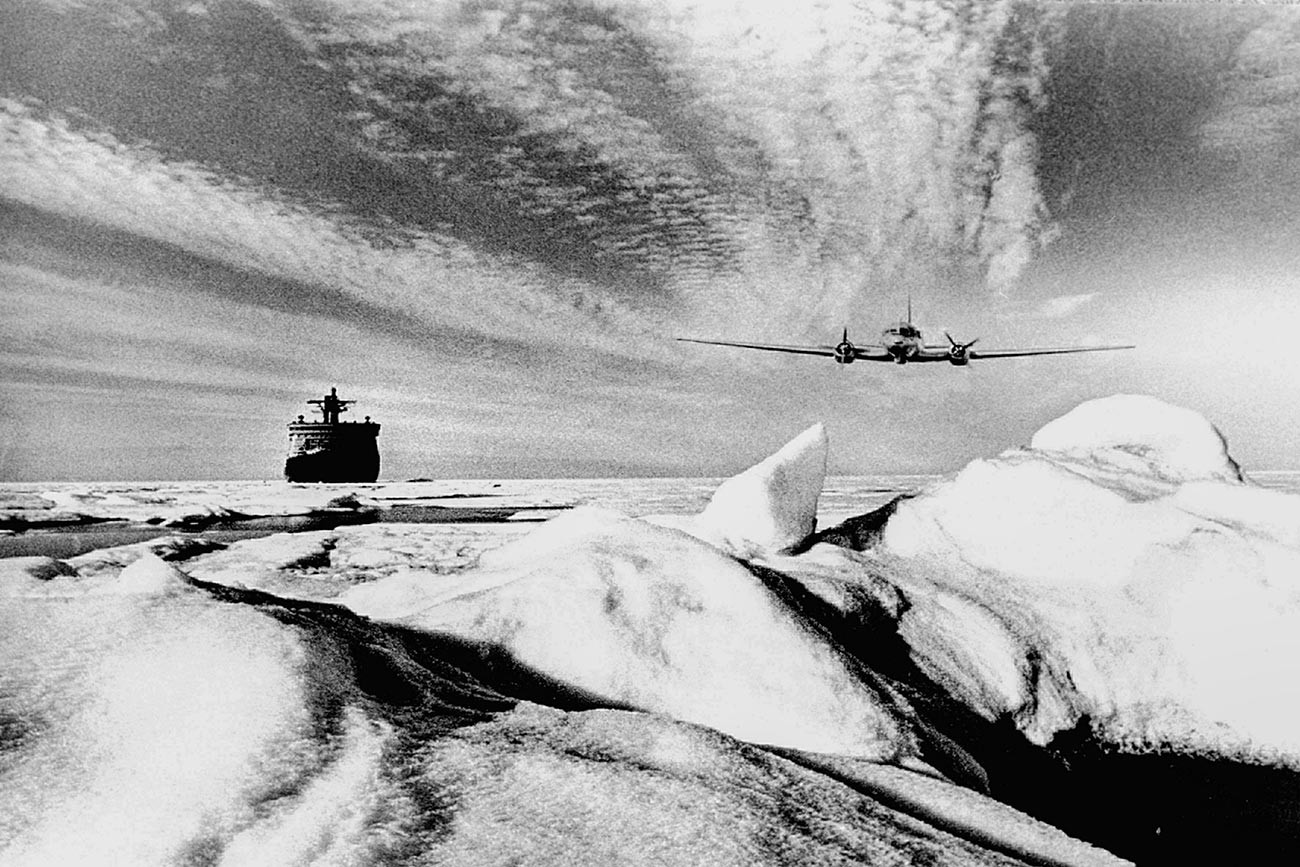 An atomic icebreaker in Arctic.

In the archives of the Arctic and Antarctic Research Institute, there is a note to Stalin from a member of the Geographical Society, Alexei Pekarsky, that proposes bombing ice jams with nuclear weapons. “A plane loaded with atomic bombs flies along the route and breaks the ice, forming a channel through which a caravan of ships passes,” Pekarsky suggested in the note. 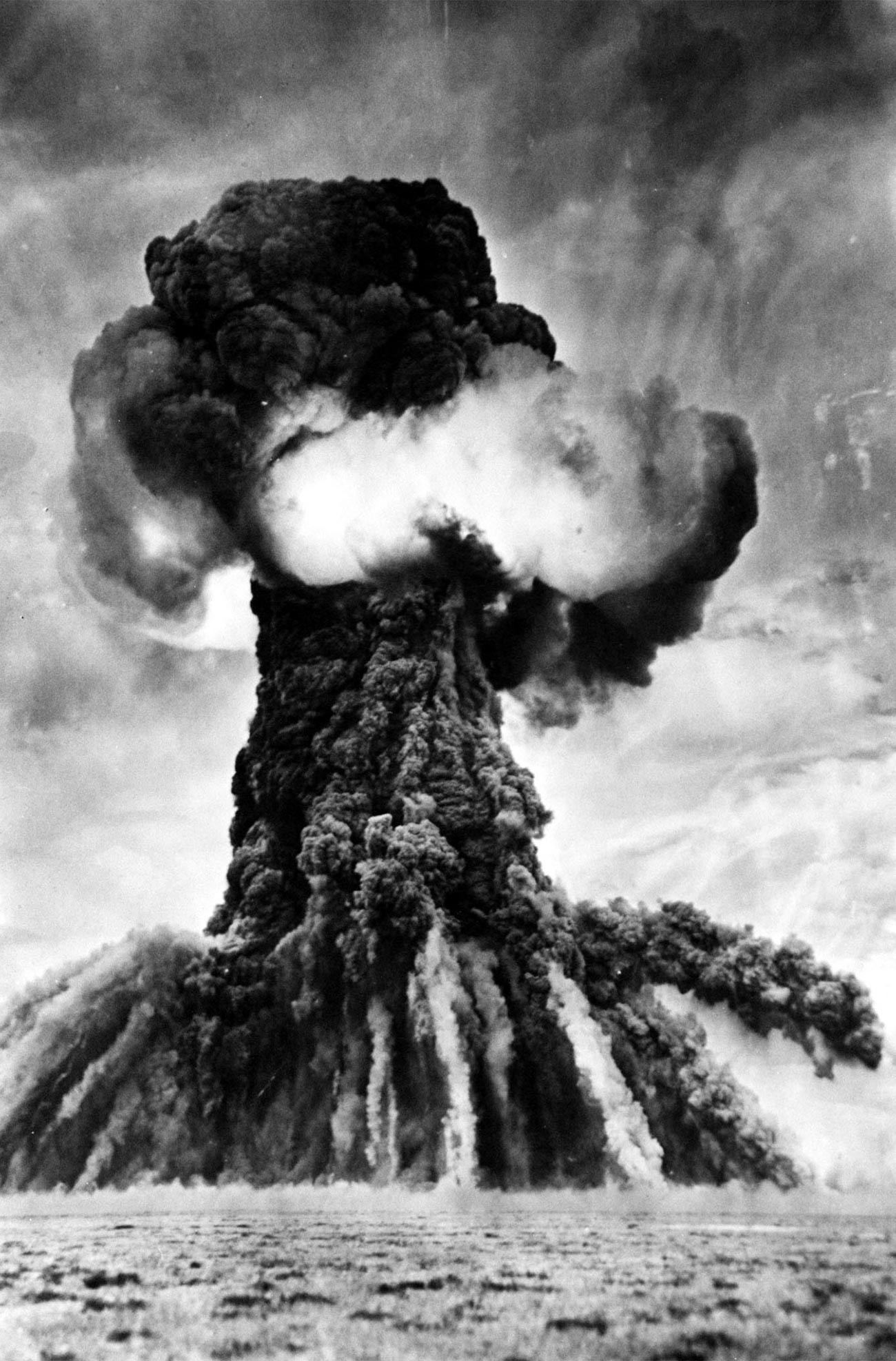 Stalin sent the document to the Arctic Institute for consideration, where scientists concluded that using atomic weapons to clear Arctic ice could be "very effective." Fortunately, in 1946 the USSR did not yet have an atomic bomb—although it was created just a few years later. Of course, it later became clear that a nuclear explosion carries side effects such as radiation, and so these radical ideas for bombing the Arctic were abandoned. However, the idea of using atomic energy in the Arctic did eventually materialize. 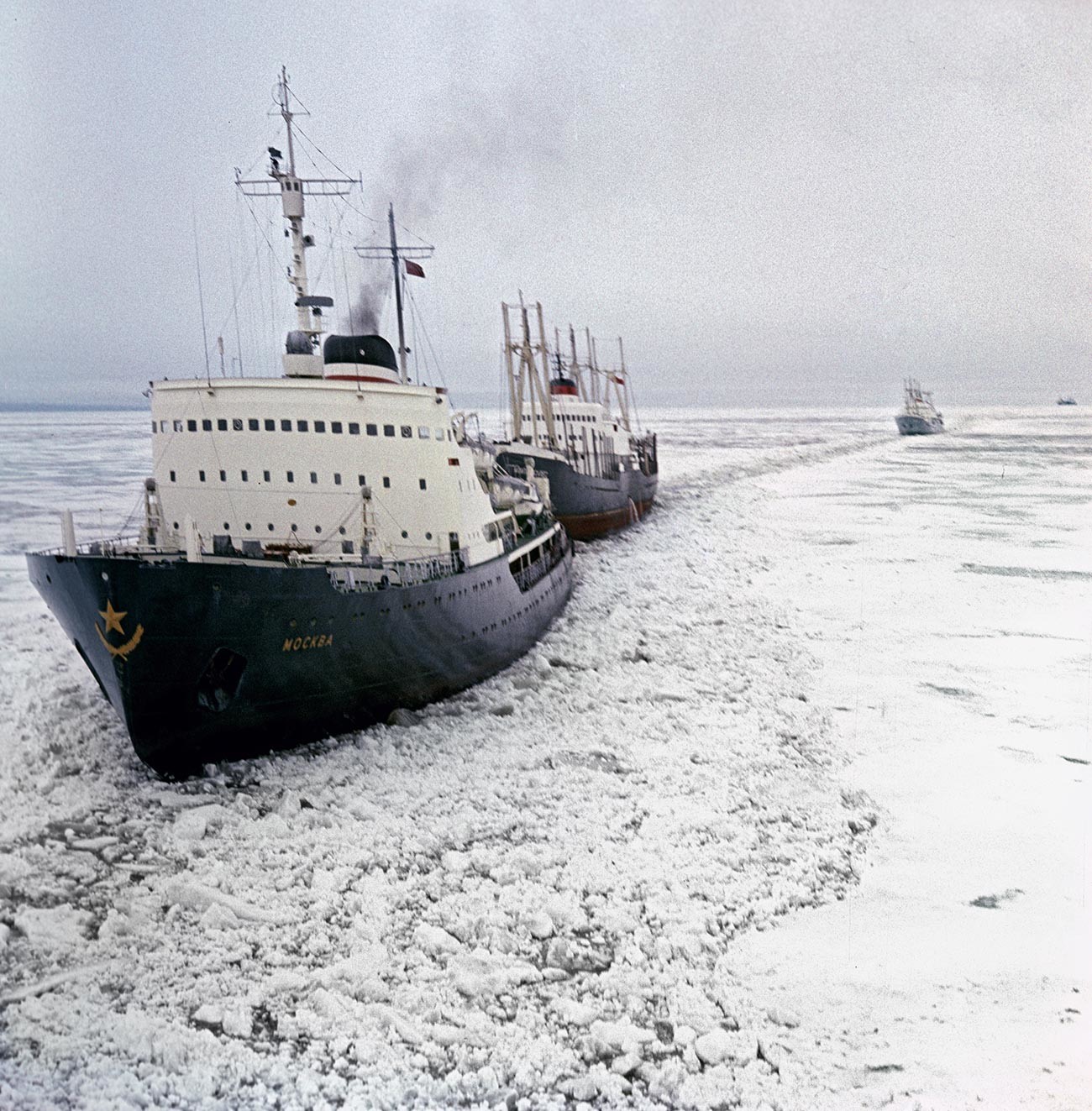 In the late 1950s, the Soviet Union built its first atomic icebreakers for year-round navigation in its northern waters. Nowadays, these powerful atomic icebreakers lead ships along the Northern Sea Route, while the further development of this important transport artery has become part of a large-scale national project. 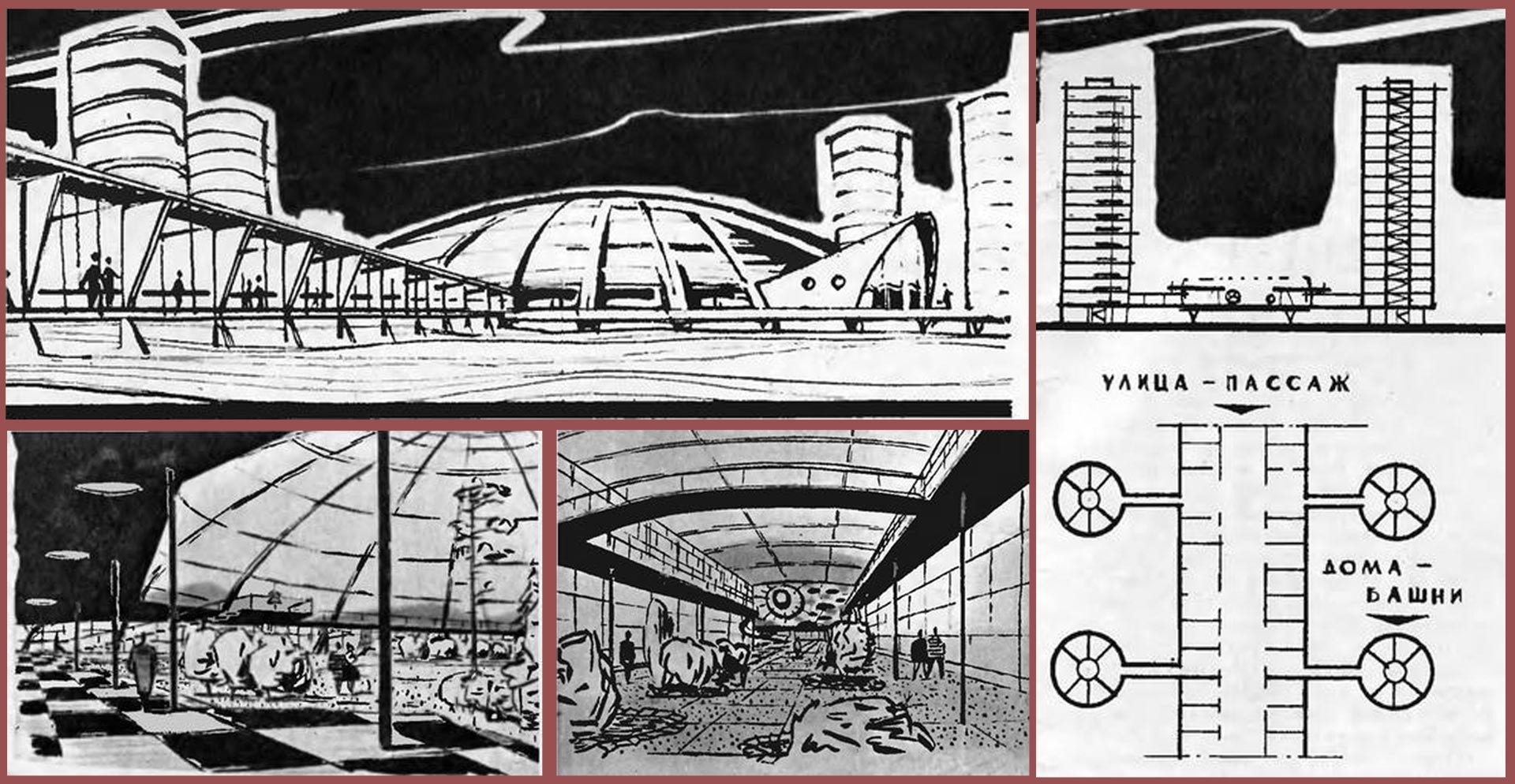 Technology for the Youth magazine, 1971

The architecture of polar cities is driven by the climate: buildings must be on stilts so their heat does not melt the permafrost, causing them to sink into the ground. Factors like protection from the wind must also be taken into account. Because of these harsh conditions, considerations about aesthetics and comfort were generally pushed to the background. In the 1960s, as the whole country was being covered with identical pre-fabricated apartment blocks known as Khrushchevkas, Soviet architects came up with the original proposal of building an Arctic city under a dome.

The project of the settlement in the Yakutian mine of Udachnaya.

A description of one such city, where all the buildings would be connected by covered galleries, was published in a popular Soviet science magazine called Technology for the Youth in September 1961. In the project, thought up by architects S. Odnovalov and M. Tsymbal, an Arctic settlement consisting of 15-storey cylindrical apartment blocks would be connected by heated passages to each other and various infrastructure facilities. Each of these complexes could accommodate from 500 to 10,000 people. 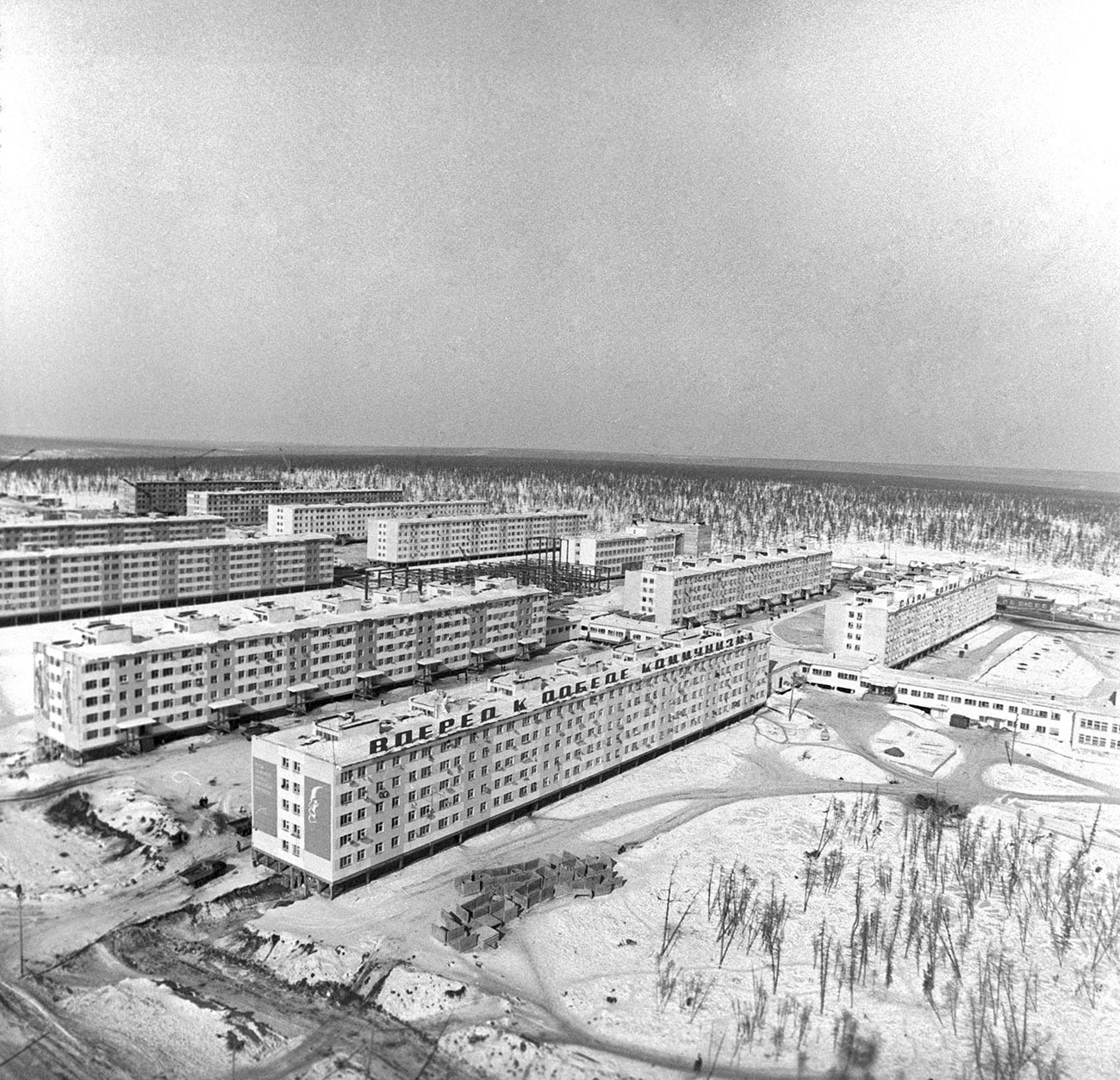 And that's how this project was realized.

“Among other things, the streamlined cylindrical shape improves the buildings' protection against gusts of wind, making them very stable during blizzards and snowstorms,” the project’s authors pointed out. The new design was planned to be piloted in Yakutia, but in the end, just one gallery was built between residential buildings in the village of Udachny. 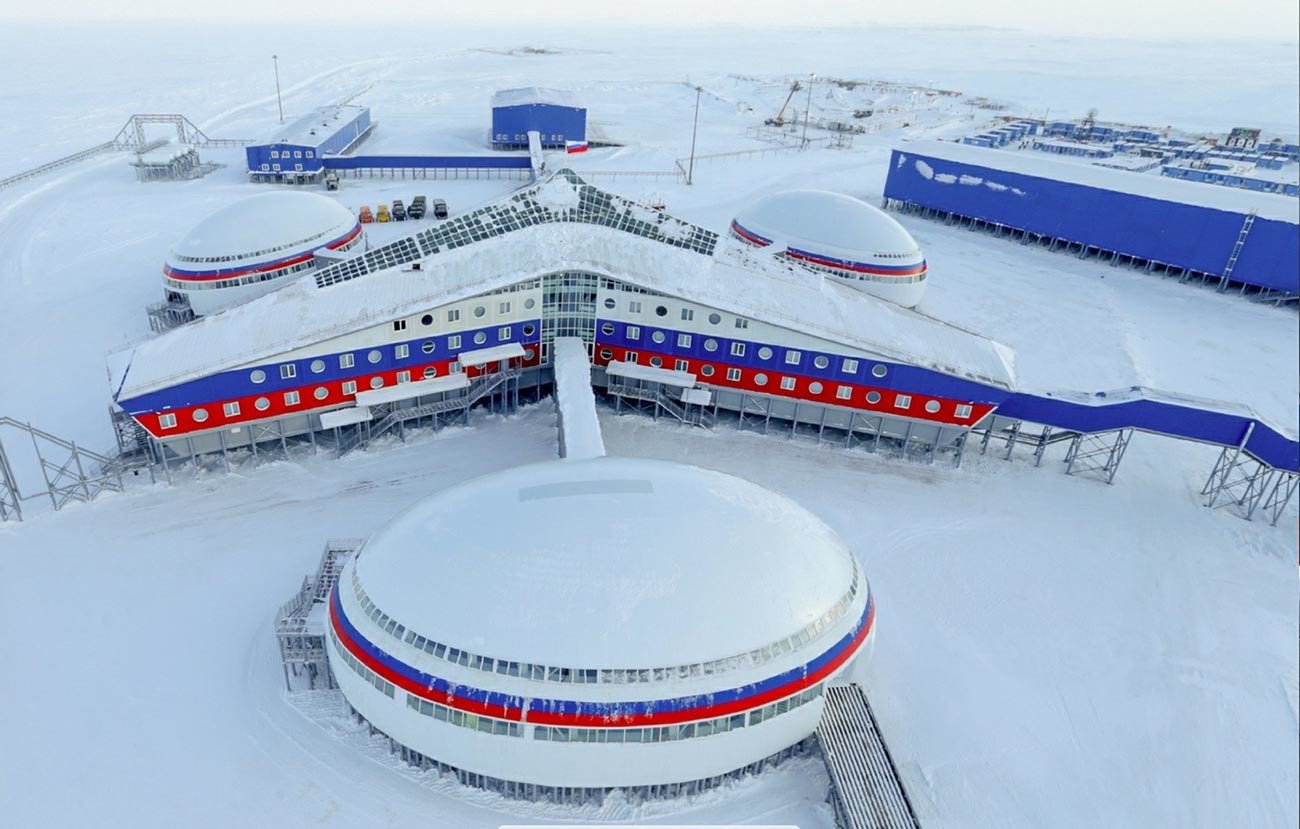 Nevertheless, today the idea of a settlement with an artificial microclimate has actually been partially implemented at two northern Russian military bases: Northern Clover in Yakutia and Arctic Trefoil in Franz Josef Land. Buildings there are oval in shape and connected by a triangular atrium. Inside there are living quarters, study rooms, a cinema hall, a canteen, recreation rooms, a medical room and a winter garden with plants. 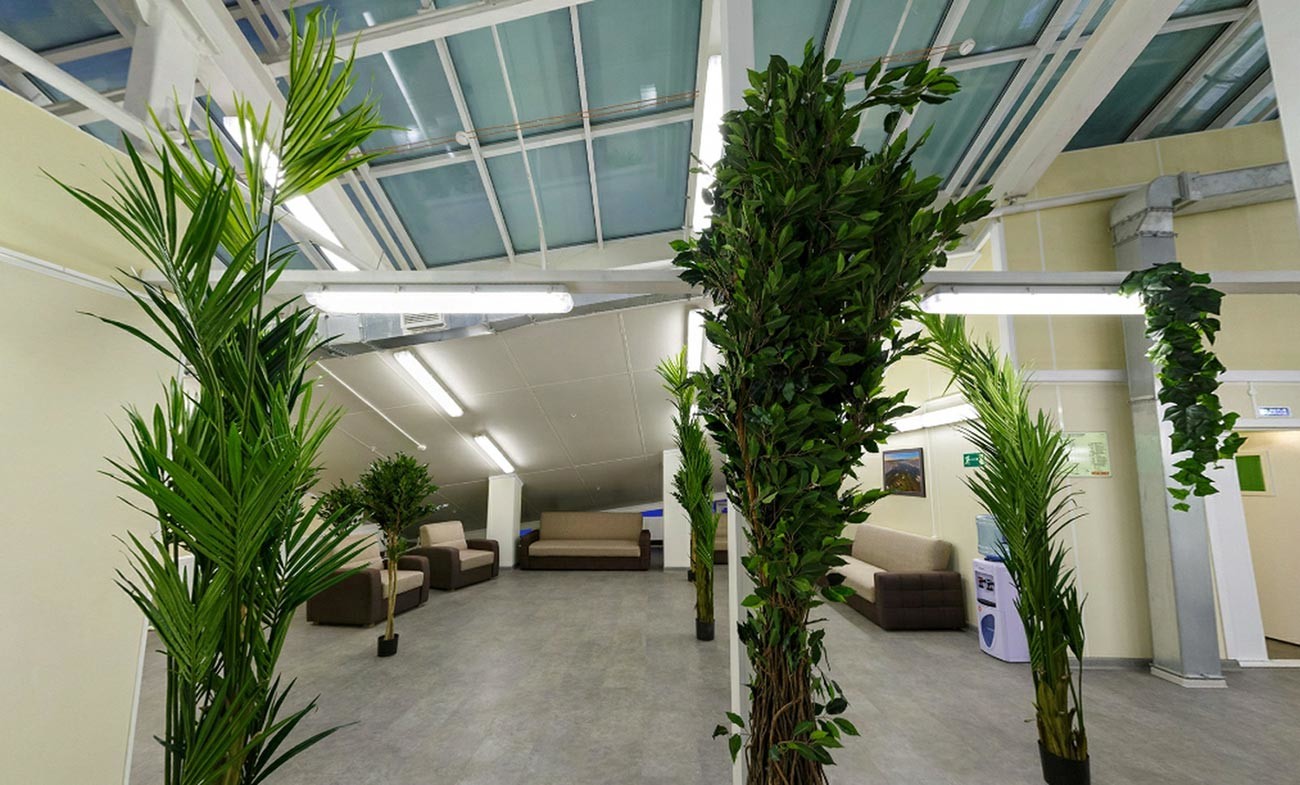 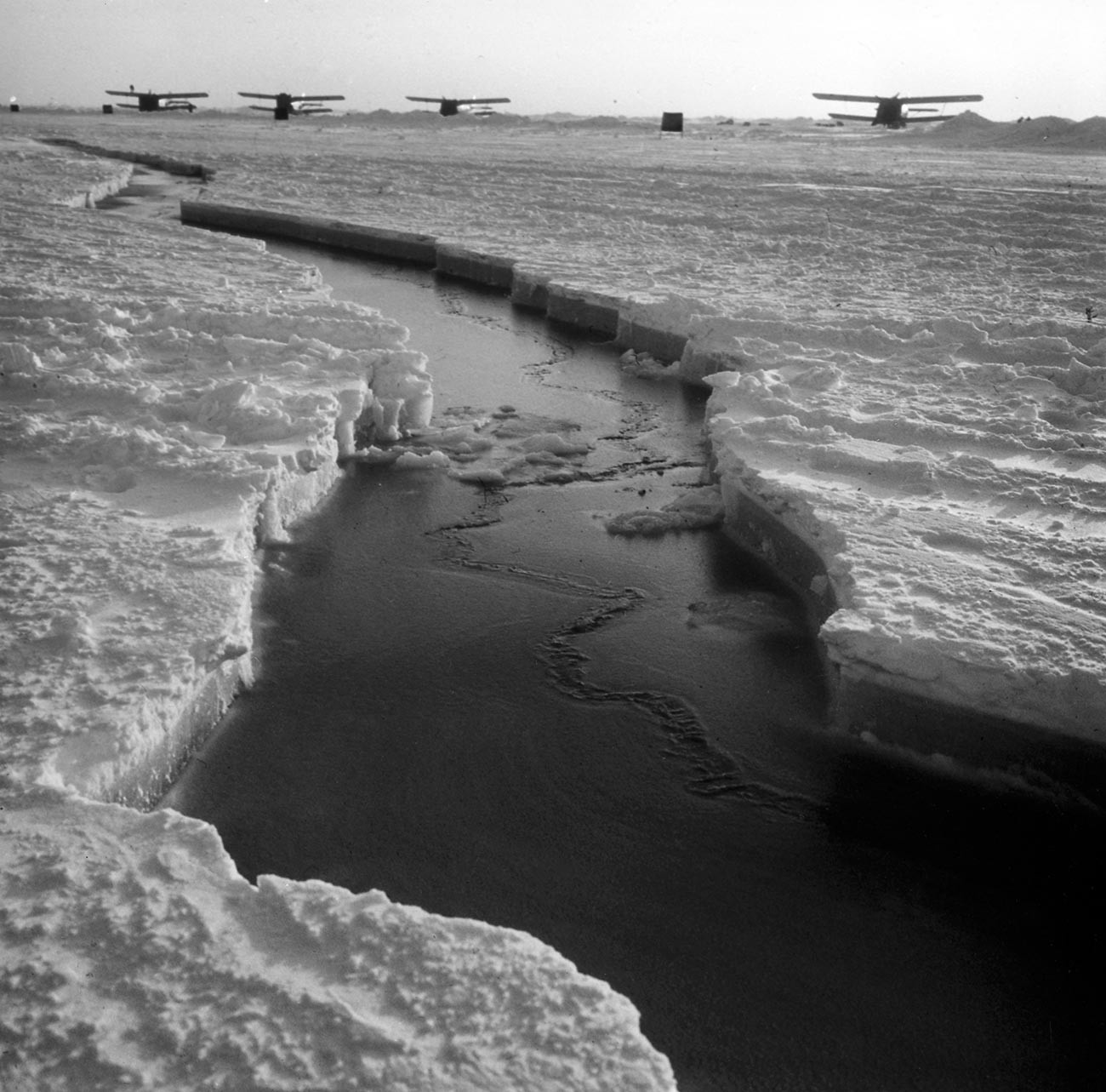 Influential Soviet climatologist Mikhail Budko theorized that the main cause of cold in the Arctic was the ice in the Arctic Ocean, so in order to make the territory more comfortable for living it was necessary to find a way to melt the ice. In 1962, the scientist proposed spraying soot produced from rubber industrial waste over the Arctic so that the darkened ice would absorb solar radiation and melt faster. To further speed up the process, he proposed covering the ice-free water with a monomolecular film. Fortunately, like many others, this, to put it very lightly, controversial and expensive concept was never implemented. However, Budko's research did make a significant contribution to the development of the present-day energy-balance climate model.