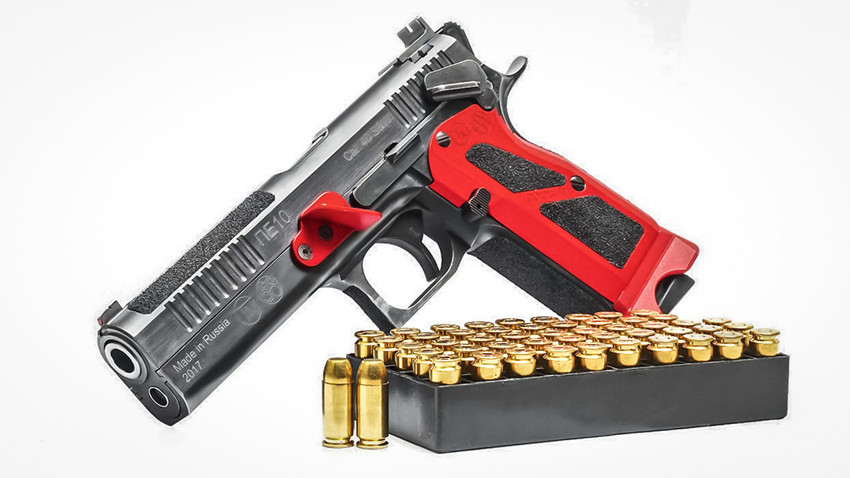 Михаил Дегтярёв/kalashnikov.ru
The weapon is comparable to sniper rifles in terms of accuracy. And price.

After the introduction of sanctions in 2014 and the import ban on European CZ and Glock pistols, Russian arms makers created the most pinpoint-deadly and high-speed domestic pistol to date — the PE 10.

“The weapon is designed for indoor shooting. It is not suitable for the military because after one cross-country run, swim or mud bath, it is unusable. The army needs weapons with Kalashnikov-level reliability to withstand temperatures from -40 to +40°C and operate in tropical, even desert, conditions,” military analyst Dmitry Safonov told Russia Beyond.

As he explained, all the components and mechanisms in the PE-10 are very delicate and intricate. The trigger, for instance, is as sensitive as the most high-precision sniper rifles. “It is short and soft, with a pull force of no more than 1.5 kgf. This increases the rate of fire, but seriously impacts reliability in combat conditions,” noted the expert.

The PE-10 is the first Russian pistol designed for the powerful US .40 Smith&Wesson cartridge (10x21 mm), which is a rather non-standard solution for Russian weapons.

Moreover, in terms of accuracy, the PE-10 rivals a sniper weapon.

“The weapon testers state that when firing manually at a range of 10 m, the bullets land within 3 cm of each other. The creators also claim that even a poorly trained marksman can hit a 4x3-cm target at a distance of 50 m,” Safonov added.

In addition, the weapon features a pedal-like safety lock operated by the thumb on the non-shooting hand, which serves to hold the weapon.

The technical warranty on the Efimov pistol lasts up to approximately 50,000 shots. This is several times more than that of the Yarygin army rifle, but half that of the Austrian Glock 17 or CZ, which it is intended to replace.

Another significant drawback compared to its European counterparts is the price. The basic Efimov pistol costs an exorbitant €2,800. For a civilian weapon, this is madness, since some custom-made guns and sniper rifles already fall into this price category.