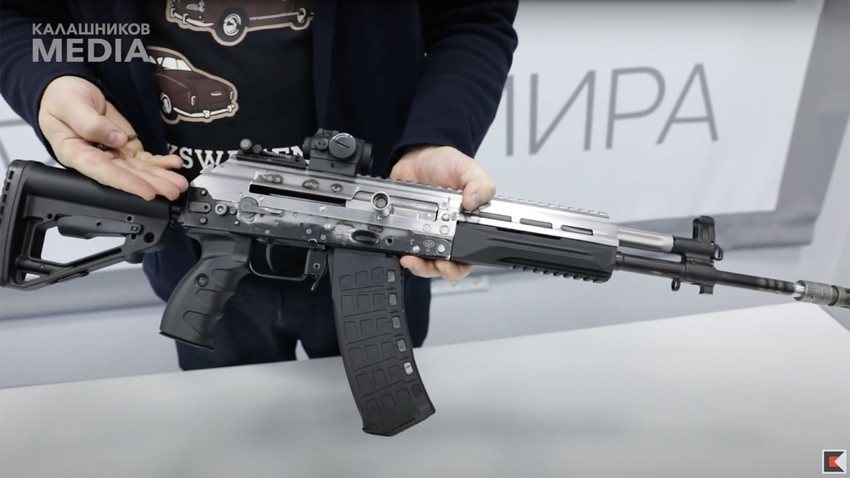 Kalashnikov Group
This rifle is for civilians.

At the end of 2020, the Kalashnikov Concern published the first video of the upcoming AKV-521.

Firstly, the gun will feature an unbreakable link between the optics binding and the barrel, whether during operation or when taking the gun apart for maintenance. Secondly, the 500 series setup will feature a separate upper and lower receiver. All moving parts, which bear the most load, will be made of metal, while all the strategic ones will be fashioned out of polymers. This solution allows the designers to reduce weight, increase ergonomics, as well as precision.

The latter is achieved, among other things, thanks to a protruding barrel that doesn’t join with the forend, while the 1913-MIL-STD Picatinny rail continues along the barrel, right up to the end of the forend.

Such construction rids the AK of a very serious drawback - its barrel lid vibrating when firing, which used to lead to the gradual misalignment of optics. Together with a “free” barrel architecture should vastly increase shooting accuracy.

Moreover, photos of the rifle during operation reveal that the engineers have swapped out the traditional Kalashnikov selective fire mechanism for one normally seen on the American M-4 and HK416. This elegant little solution has allowed to increase ergonomics by several orders of magnitude, increasing the firing speed of the new 500 series.

The bolt carrier, piston and spring, meanwhile, have remained as they were. The same can apparently be said of the trigger mechanism.

“Visually, it seems that the new AKV-521 is, first and foremost, a reworked receiver. This was, evidently, an attempt to replicate the HK416’s modular structure, which itself was a comprehensive update to the existing M-4 and M-16 rifles used by NATO armies,” says military analyst Dmitry Safonov.

Such a module is actually cheaper to make than a full-fledged gun. Moreover, it improves ergonomics and shooting reliability, as well as allowing to swap out old moving parts for new ones. Not to mention the fact that the military gets to use a familiar system.

According to Safonov, this interesting construction choice will be appreciated by shooters within Russia’s special operations units. “They like to customize their weapons for personal use and the new setup, which increases accuracy, also reduces weight - something that they’re sure to take a great liking to.”

Further to Safonov, the new 500 series will debut at next year’s ‘Armiya-2021’ expo in Russia. “This year, Kalashnikov had a big opening with the A-19, designed for use by NATO member armies, owing to the difference in caliber. Therefore, the new AK-521 will have time to undergo some additional work and testing before being before being shown to the world at the next expo,” the expert adds.