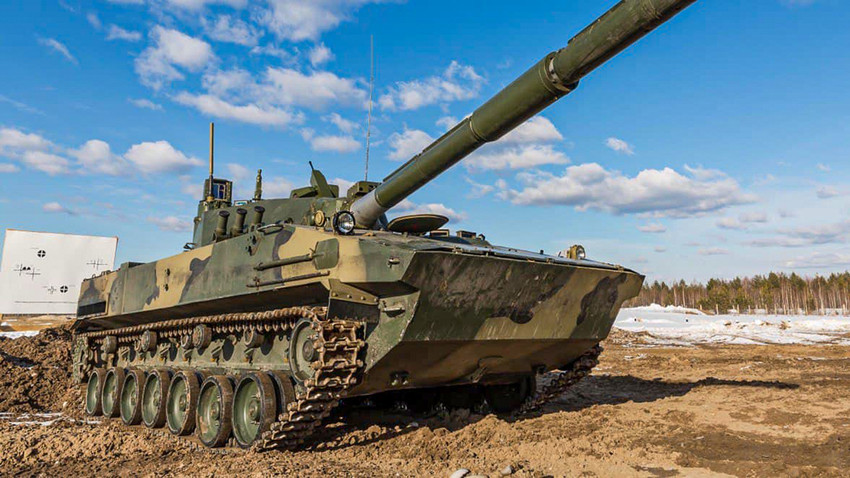 Rostech
This machine will be able to cross over rivers while simultaneously firing at enemies.

At the end of December 2020, the Russian military revealed battle test footage of its newest light floating tank - the ‘Sprut-SDM1’. The machine was created for the Airborne forces and recently proved its capabilities against high waves of the Black Sea.

“During the state tests, the light tank was subjected to extreme tests at sea, in the middle zone of Russia and the subtropics, where the air temperature reached plus 40 degrees, and passed them successfully. At the beginning of the next year, we have scheduled low temperature tests. ‘Sprut-SDM1’ is primarily intended for Russian paratroopers, yet we also expect that the capabilities shown by ‘Sprut’ will also be of interest to foreign customers,” says Bekhan Ozdoev, industrial Director of the arms complex of the state corporation Rostech.

The press service noted that at each stage of the tests, firing is carried out in different conditions. According to the results of state tests, the design documentation for the machine should receive the designation ‘01’, thus triggering the start of mass production.

“Tests have confirmed that the combat vehicle is able to overcome water obstacles without preparation when the sea is rough up to three points, to keep afloat while firing and easily land on an unprepared shore,” according to the Rostech corporation.

What’s behind the Sprut-SDM1

The light floating tank ‘Sprut-SDM1’ is developed and created on the basis of the ‘Sprut-SD’ model. The new machine has improved command control by installing equipment to work as part of a single tactical control system. Combat power is enhanced by a new digital fire control system.

The ‘Sprut-SDM1’ is armed with a 125 mm tank gun. It’s capable of reaching distances of up to 500 km without refueling. It can also be transported to fight zones by landing ships and military transport aircraft, be landed by landing and parachute method together with the crew on Board.