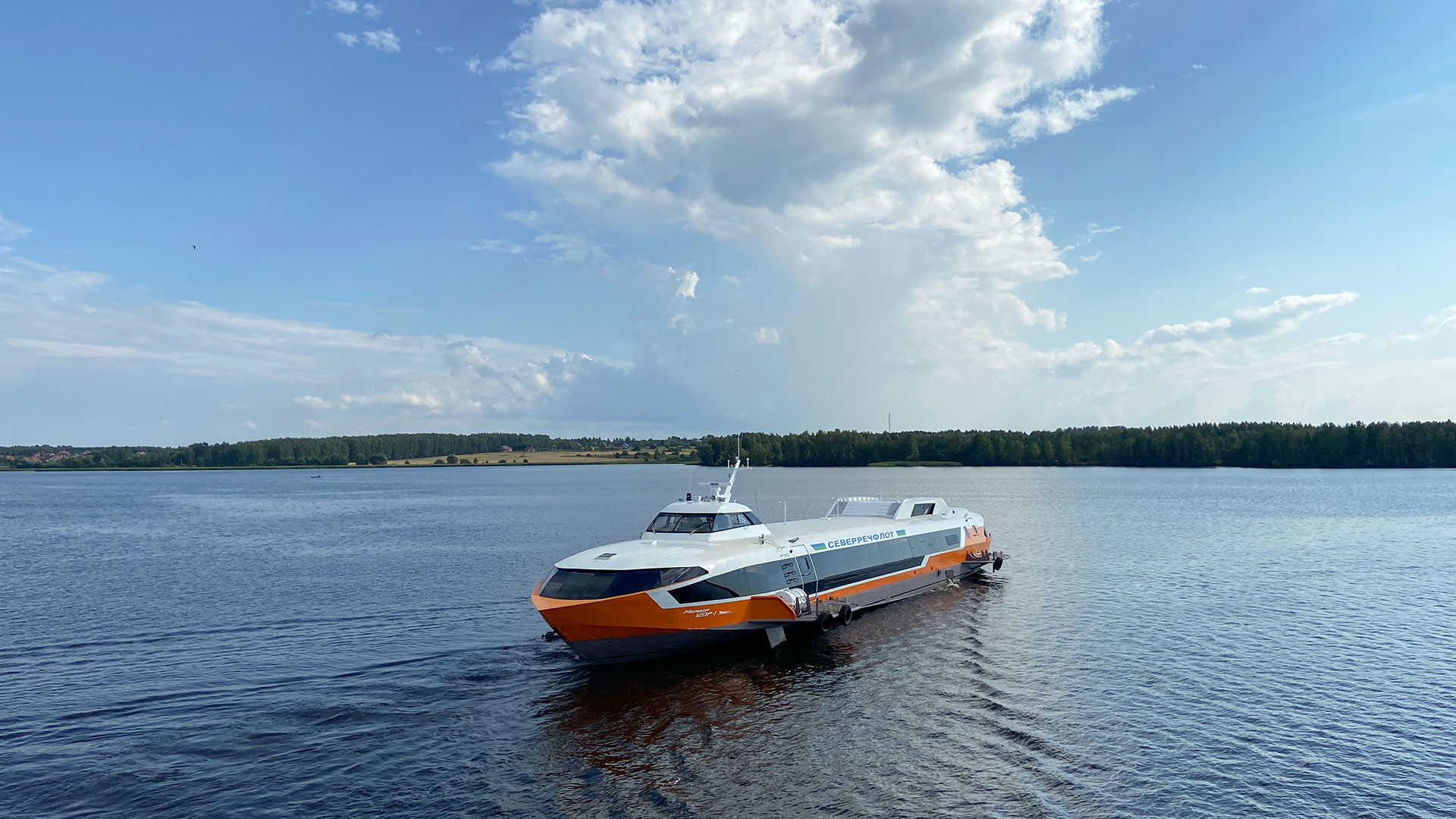 Georgy Povetkin/TASS
Hydrofoil ships were very popular in the USSR and now their technology is having a comeback. What’s so special about these flying behemoths?

The ‘Raketa’ (“Rocket”) was the first prototype of Soviet hydrofoil ships. It made its maiden voyage on August 25, 1957, and went from Gorky (now Nizhny Novgorod, 400 kilometers north-east of Moscow) to Kazan (720 kilometers east of Moscow) down the Volga River. The ‘Raketa’ covered these 420 kilometers in seven hours - reaching speeds of up to 60 km/h, which was very fast for a river ship. The ships of this type have special foils underneath and this type of design significantly reduces the water resistance. It gives the hydrofoils their main advantage - very high speed. Also, it vastly reduces bumpiness (oscillation) for passengers. 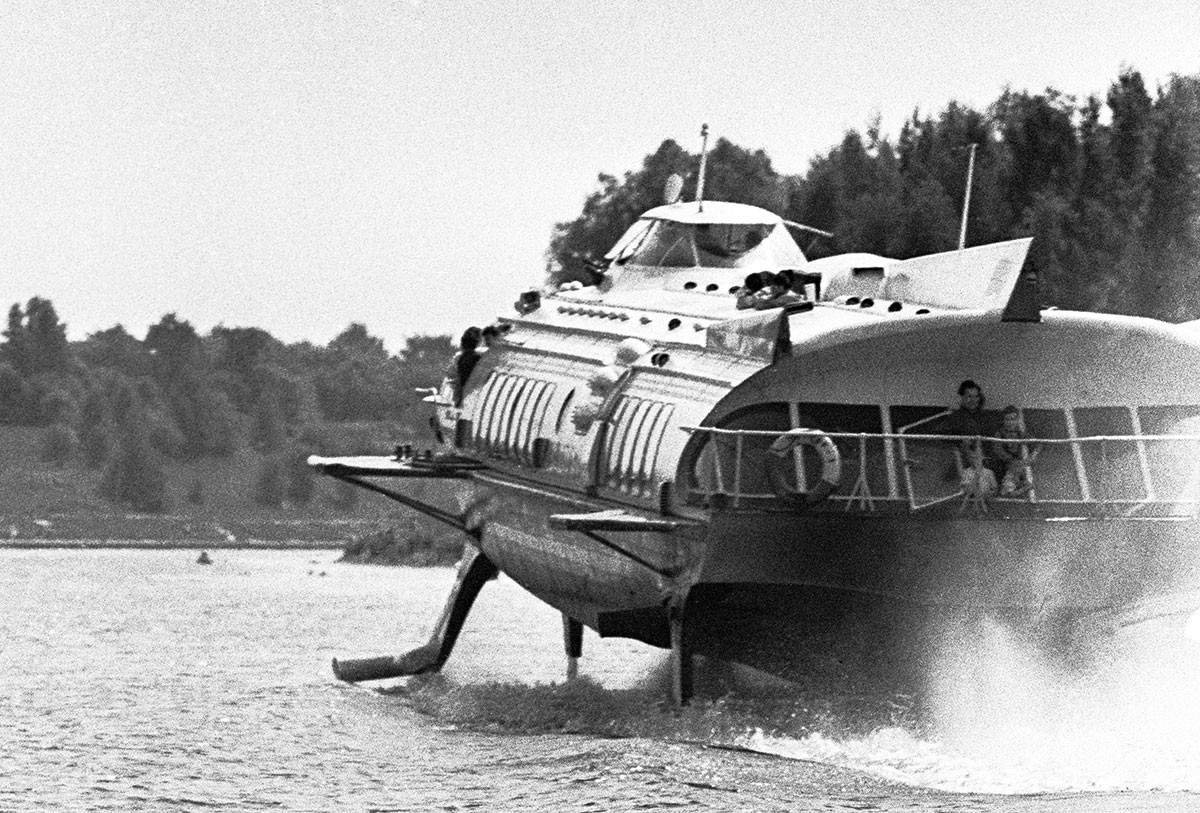 The foils can be constructed in different ways: For example, ‘Raketa’ had U-shaped shallow-submerged ones. On its first voyage, the 27-meter-long hydrofoil had 30 passengers, even though its capacity was for 64 people. And the ‘Raketa’ was a success: 300 ships were made in total and it was so popular that even the next hydrofoil models were often commonly called ‘Raketa’.

‘Meteor’, the most widespread Soviet hydrofoil, 1968.

New Soviet hydrofoil models appeared thanks to a team of engineers headed by a ship constructor and innovator named Rostislav Alexeyev. Soon after the triumph of ‘Raketa’, they designed a hydrofoil called ‘Meteor’. It was bigger than ‘Raketa’, had a higher max speed of 77 km/h and could carry up to 123 people. The ‘Meteor’ was the most widespread Soviet hydrofoil - 400 ships were produced in total. They were exported to Germany, Egypt, Greece and other countries. Some ‘Meteors’ are still in use in Siberia, in the Far East and in St. Petersburg, where they are used for touristic cruises to Peterhof (23 kilometers south-west of St. Petersburg) and Kronshtadt (30 kilometers north-west of St. Petersburg). 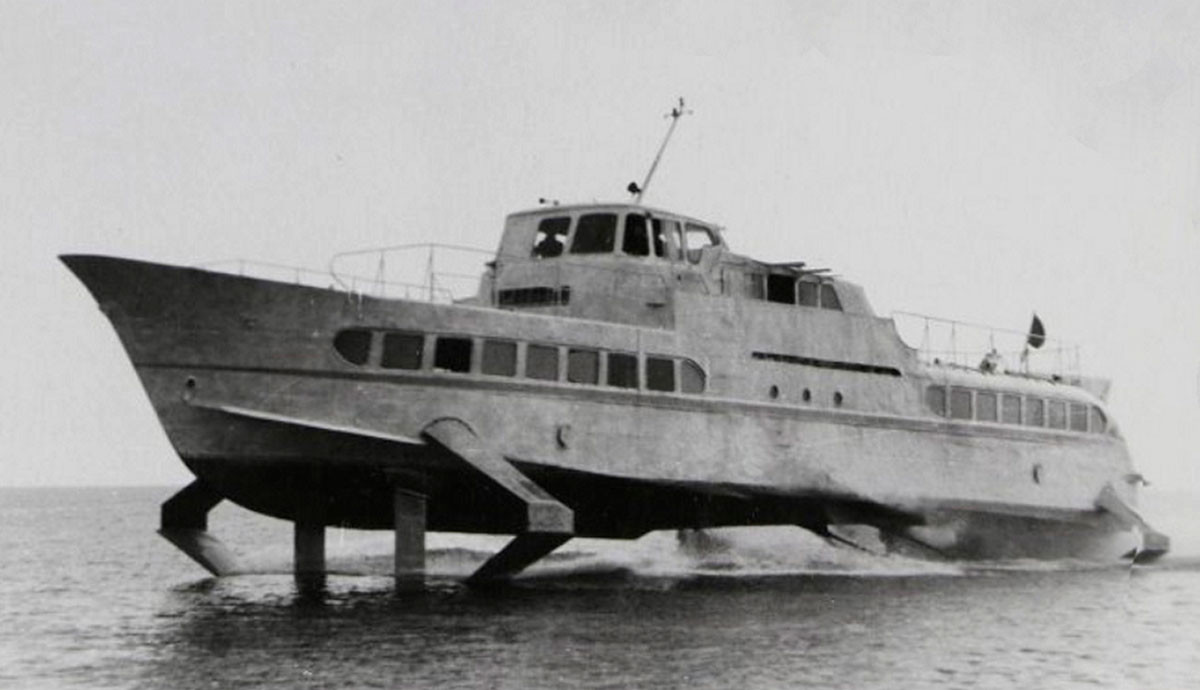 Some Soviet hydrofoils were designed to operate in sea waters. One of them was the ‘Strela’ (“Arrow”). Two ships of this modification appeared in 1961 and were used in the Black Sea. ‘Strela’ had two V-shaped semi-submerged foils - a special construction for the sea. It helped these ships travel up to 70 km/h even in rough seas (with waves up to two meters high). The ‘Strela’ could carry up to 90 passengers on board. 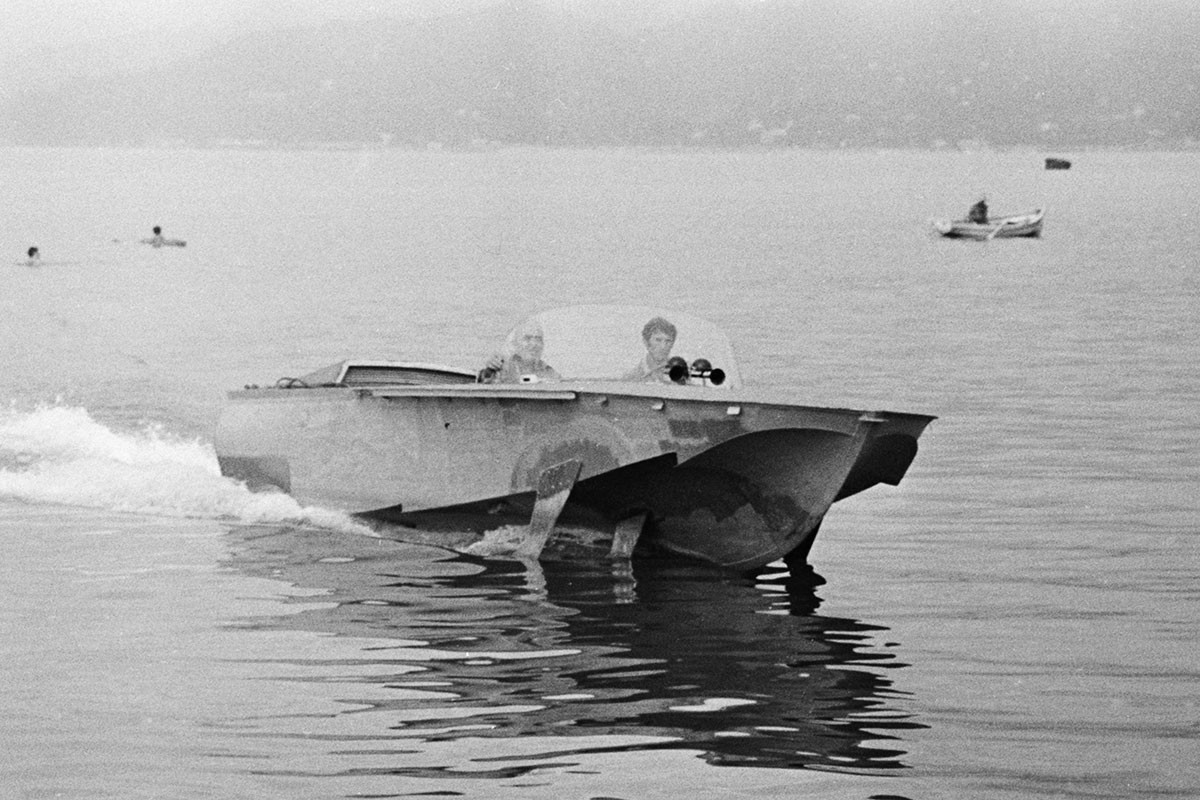 The ‘Volga’ hydrofoil holiday cruiser was universal: it could be used both in shallow-sea waters and on rivers and lakes. The ‘Volga’ was created in the early 1960s. At just 8.5 meters in length, the cruiser was really small and could only carry 6 people, including the captain. It also had a removable awning instead of a roof. The ‘Volga’ had T-shaped semi-submerged foils and a max speed of 60 km/h. Later, the cruiser was remodified with V-shaped foils that helped it withstand stronger waves. 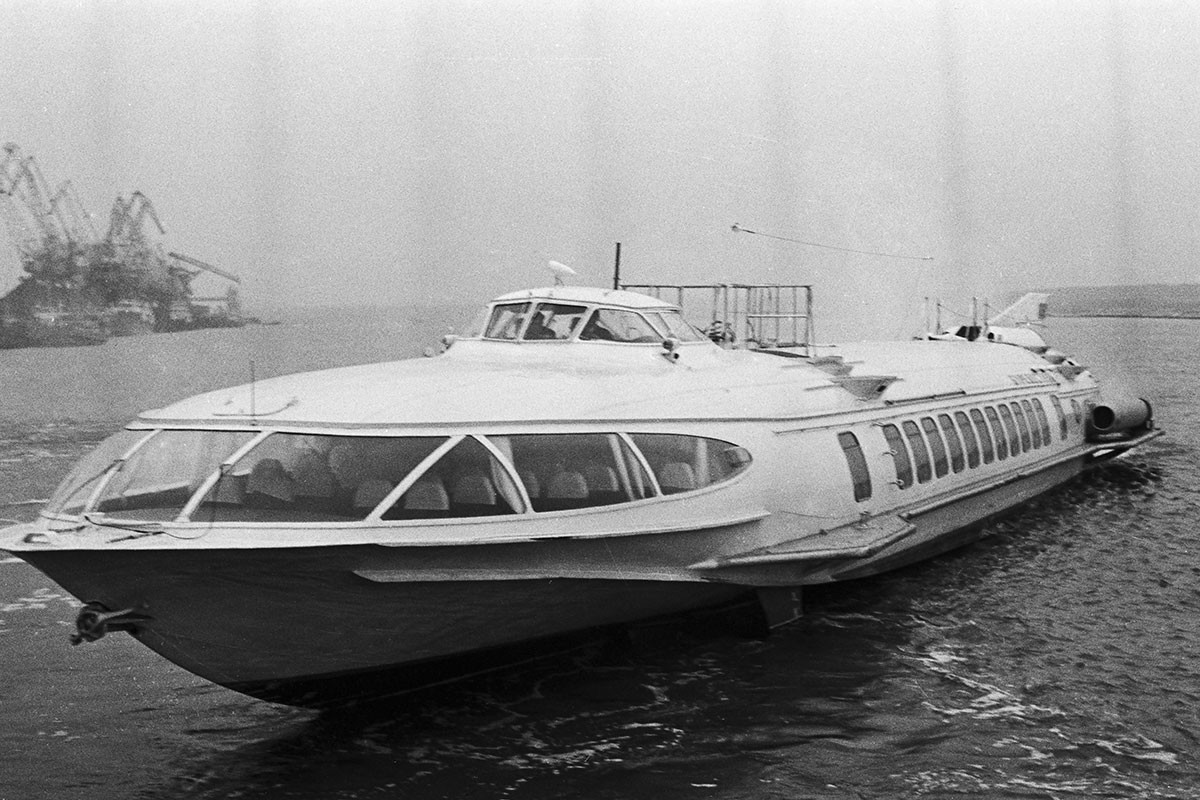 Rostislav Alexeyev always wanted his ships to be faster. The diesel engines limited the speed, so he decided to try to equip a hydrofoil with a gas-turbine motor taken from a plane. This type of engine is lighter and gives more power than a diesel one. One of the results of this experiment was the ‘Burevestnik’ (“Petrel”) river ship. It also had two water jets instead of a propeller. These construction changes helped the hydrofoil reach a speed of 95 km/h. The ‘Burevestnik’ was 43 meters long and could carry 150 passengers. 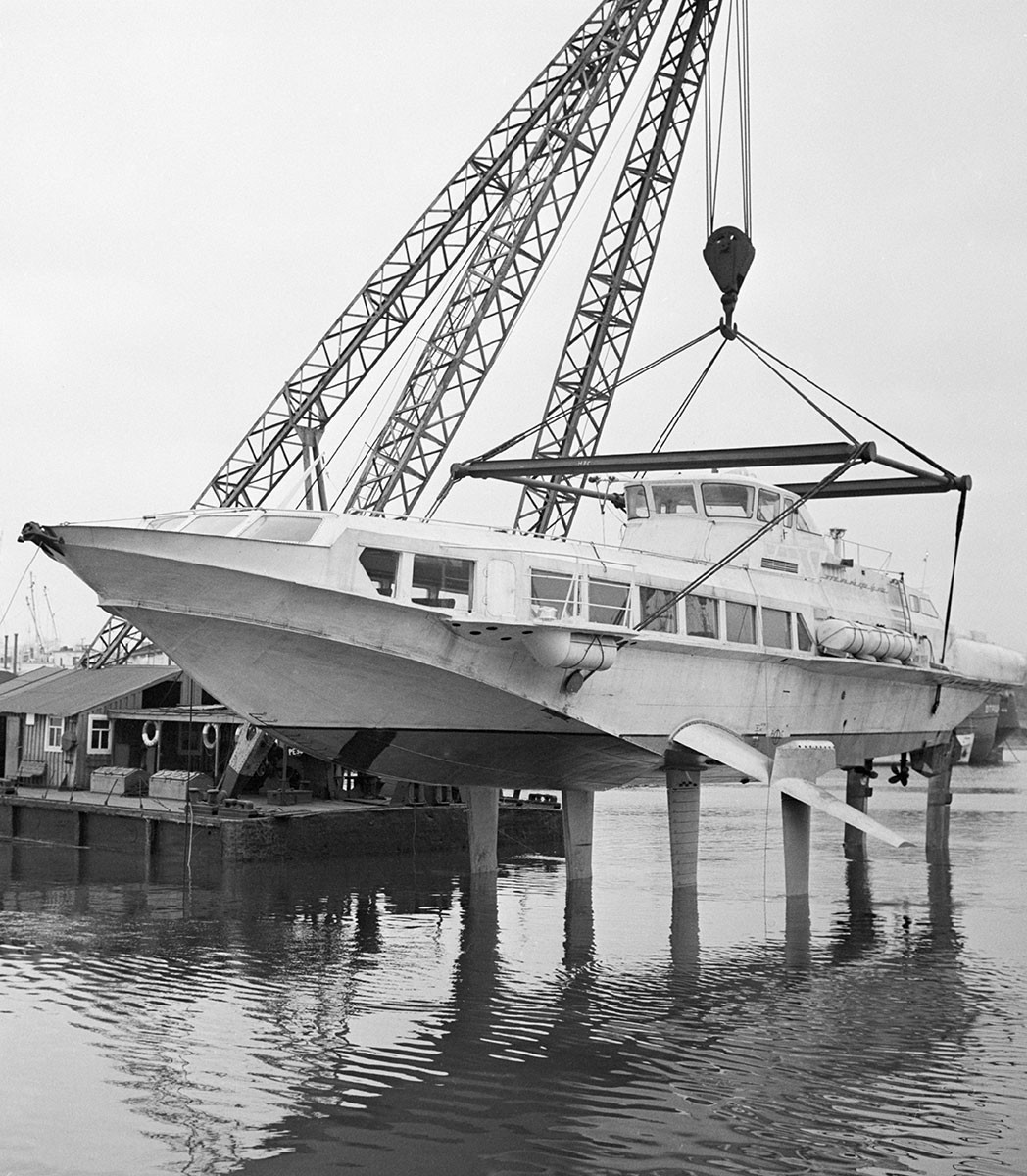 The ‘Tayfun’ (“Typhoon”) hydrofoil wasn’t just a usual passenger boat. It was created in St. Petersburg as a part of a military hydrofoil project to set up some experiments. ‘Tayfun’ was finished in 1969 and was used both in river and sea waters in the 1970s. It had innovative T-formed fully-submerged foils with autopilot controlled flaps. ‘Tayfun’ could reach speeds of up to 83 km/h and withstand rough seas. It had a maximum capacity of 98 passengers and was 31 meters long. It turned out to be efficient, but never went into mass production, because its designers didn't consider it to be a self-sufficient project: it had been initially created for experiments in the development of a military hydrofoil called ‘Uragan’ (“Hurricane”).

There were several types of military hydrofoils like coast guard motor boats and a missile-carrying ship with the code name 1240 ‘Uragan’ (“Hurricane”). The military ship was built between 1972-1976 and was in service in Crimea between 1979-1990. It had a length of 56.6 meters and a standard weight of 342 tons (while the ‘Meteor’ weighed just 36.6 tons). The foils of the ‘Uragan’ were fully-submerged and autopilot controlled. It was possible to raise the foils up, so they didn’t touch water. In this mode, the ‘Uragan’ could travel in high seas with waves up to six meters high. In calm seas, the hydrofoil ship could reach a max speed of 111 km/h. It was operated by a crew of 34 people and armed with anti-ship cruise missiles and a guided missile defence installation. Unfortunately, only one was ever made, as it turned out to be a very complicated and costly project. 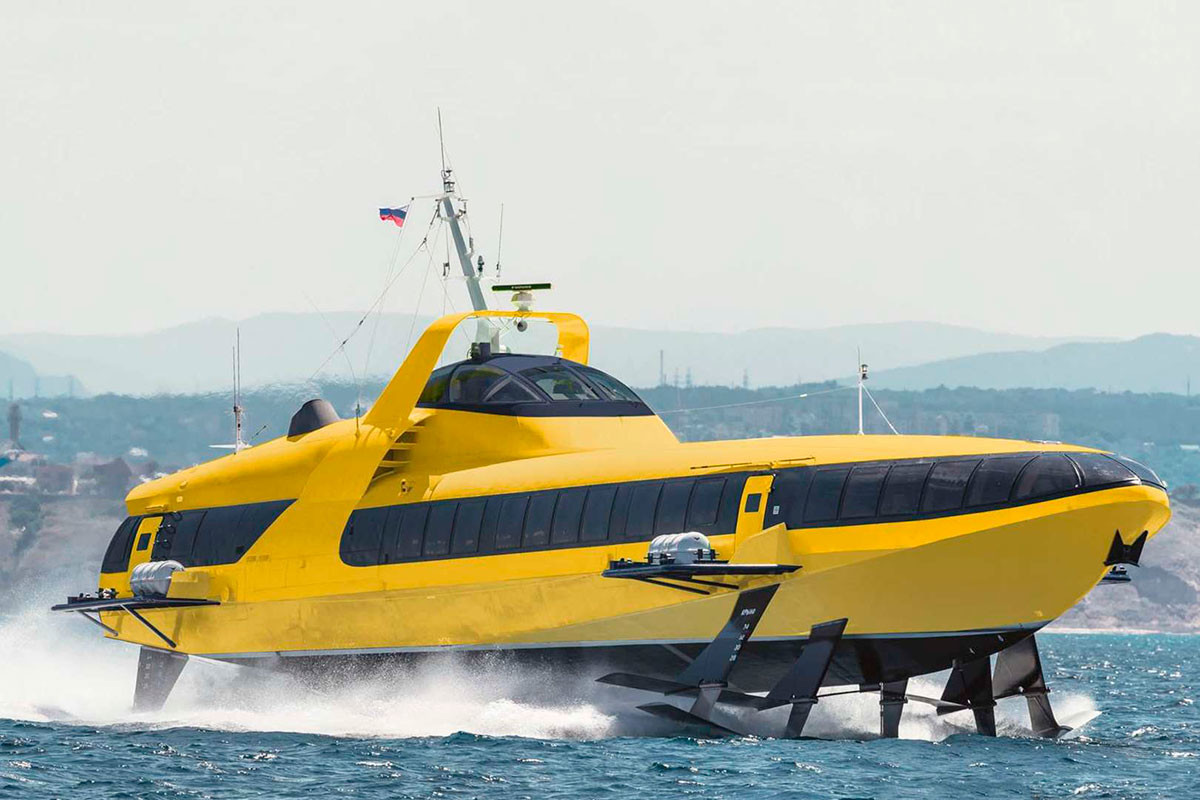 After the fall of the USSR, hydrofoil construction was halted, but recently, the development of these ships has, once again, resumed. In 2013, the construction of a modern Russian hydrofoil called ‘Kometa 120M’ (“Comet 120M”) began in Rybinsk (260 kilometres north-east of Moscow). It was finished and sent for testing to Crimea in 2017. The ‘Kometa 120M’ is constructed for sea voyages, where it can travel at speeds of up to 65 km/h. The hydrofoil looks more like a spaceship and has an autopilot system for its foils. The new ship is 35.2 meters long and has a maximum capacity of 120 passengers. 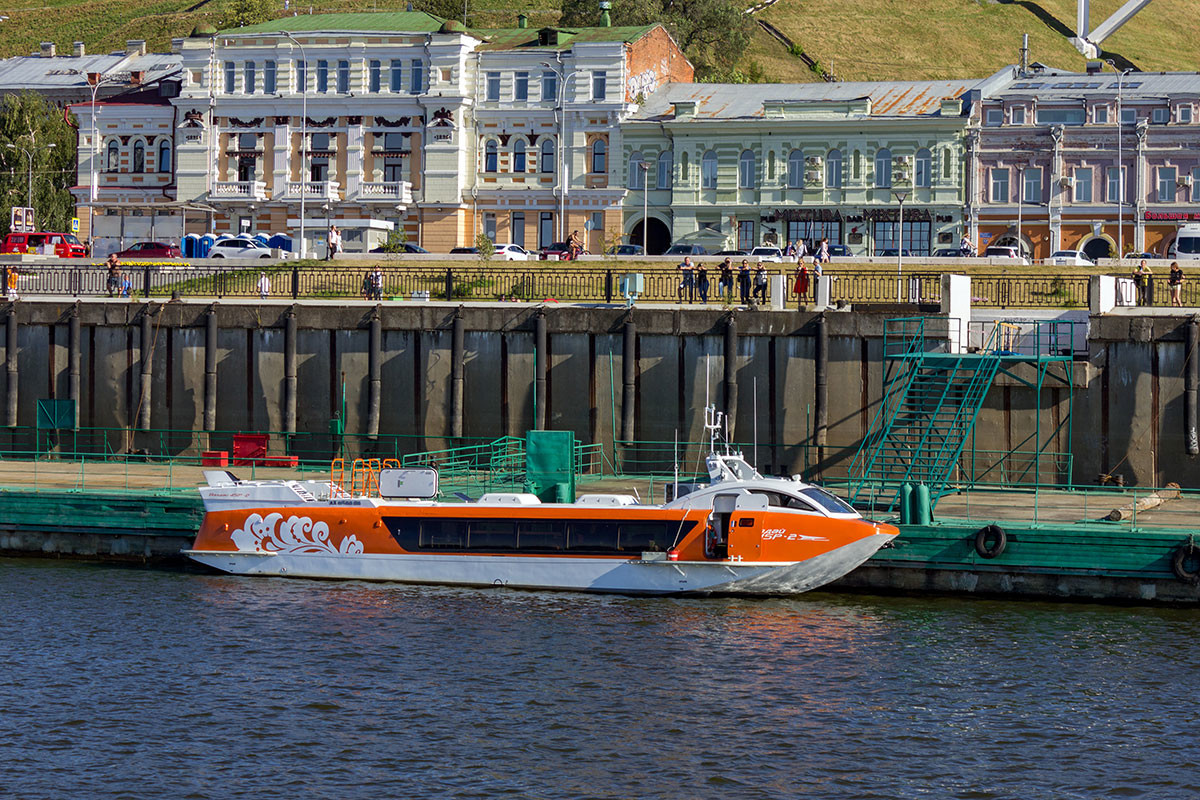 Next, a hydrofoil modification called ‘Valdai 45R’ was built in 2017. It was designed for full-flowing rivers. It may become very helpful in the northern regions with a lack of roads. This new hydrofoil isn’t very big: it’s just 21.3 meters long, needs only two crew members and a maximum capacity of 45 people. It can travel at speeds of up to 65 km/h. Several ‘Valdai 45R’ ships are already in operation on the Ob, Irtysh and Volga rivers. 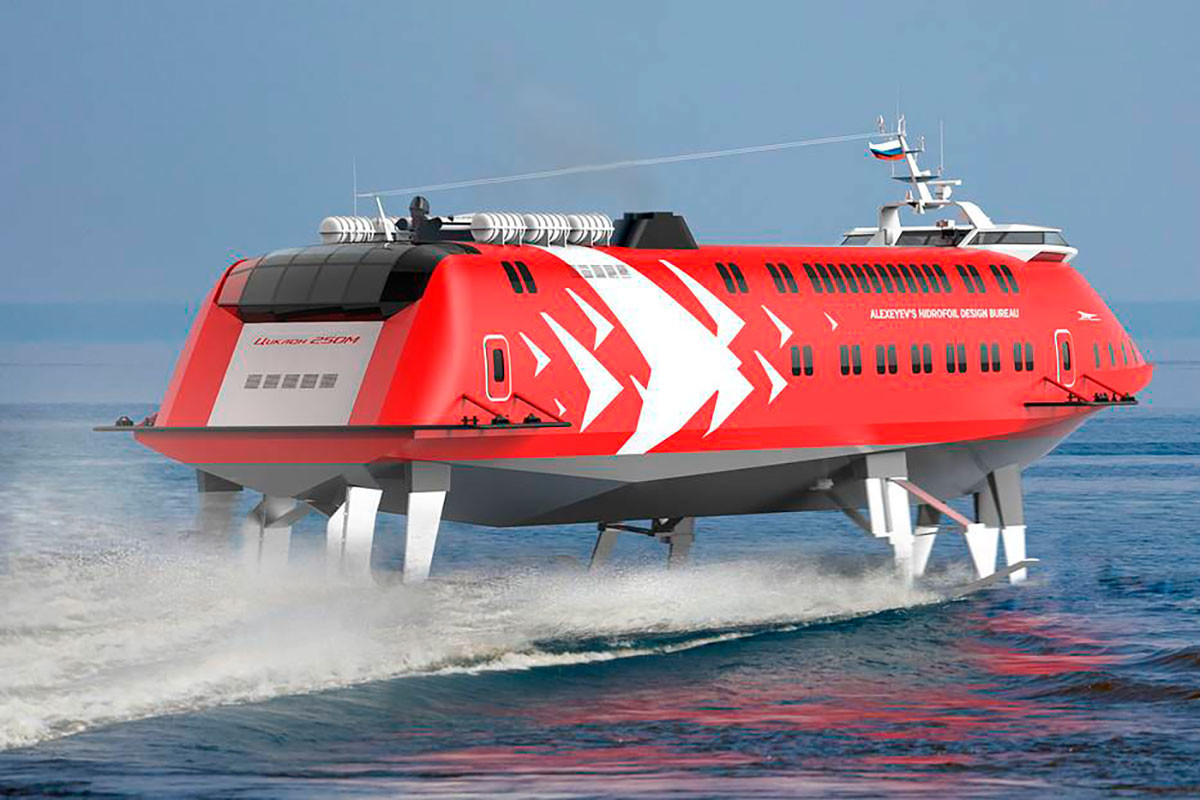 There’s also a huge sea hydrofoil called ‘Tsiklon 250M’ (“Cyclone 250M”) in the project stage. It’s a double-decker ship equipped with airliner-type seats. It has a gas-turbine motor and an unusual system of small foils. The design allows the ‘Tsiklon 250M’ to gain speeds of up to 101 km/h. The ship is 46 meters long and has a maximum capacity of 300 passengers - more than any other Russian or Soviet hydrofoil ship.